After fading from the minds of most mountain bikers for quite a while now, American Classic is back in the mix…But not with hubs and rims as you might imagine. Instead, the brand is re-emerging with a new line of tires. They are offering a Downcountry model in 29″ as well as a mix of three Trail and Enduro tires available with two different casings (60TPI and 120TPI) in both 27.5″ and 29″.

What stands out most about these tires is their emphasis on value – American Classic will be selling them directly via their Amazon web store. With not a single model over $50, they come in at a substantially lower cost than most high performance tires on the market. I received a set on very short notice, but did have time to squeeze in a couple of rides in for some first thoughts… 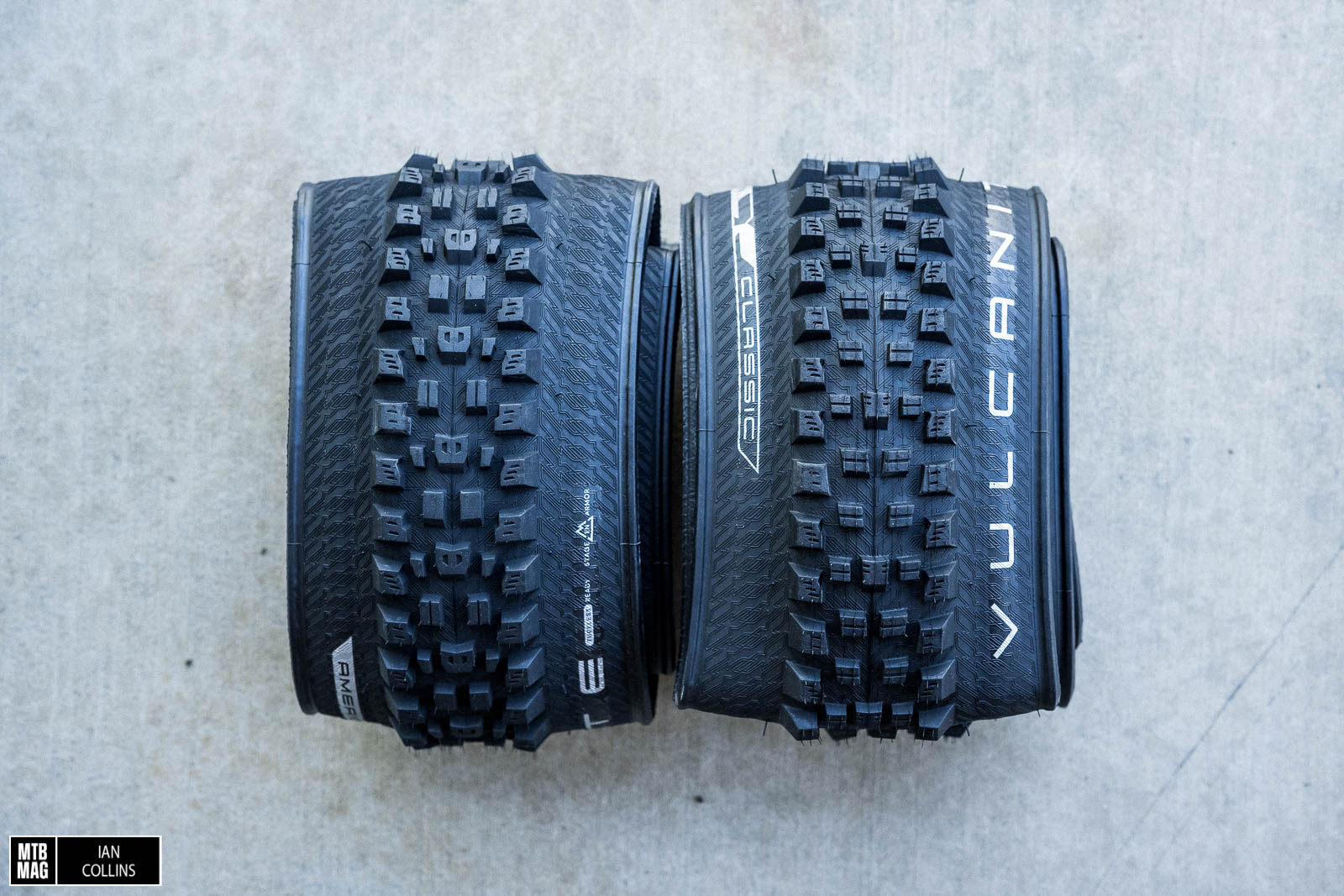 I popped the front specific Tectonite paired with the Vulcanite out back, which, although it can be mounted front or rear, does look a bit more like a tire you’d want out back. At some point however, I will try it up front… 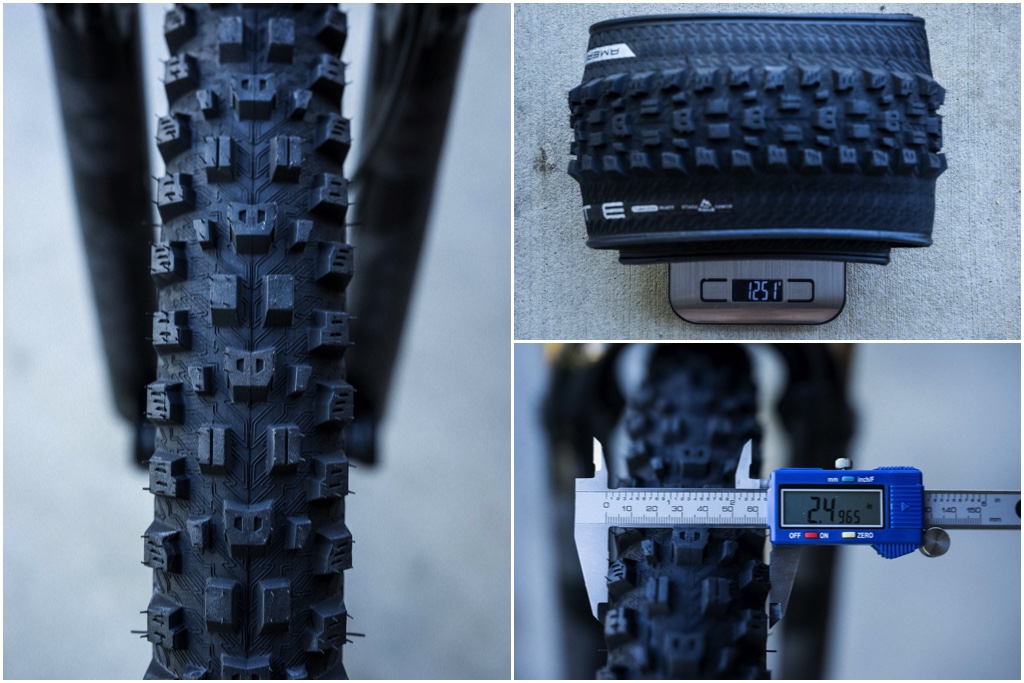 It’s hard not to look at the Tectonite and immediately think of a Maxxis Assegai – and that isn’t without reason. In a direct comparison, each individual knob varies in shape, size and orientation, but it does have a very similar overall tread pattern. Mainly, it is the miniature intermediate knobs placed in every other row that make it most reminiscent of the Assegai. At 1,251 grams and a tick under 2.5″, American Classic’s claimed weights were slightly optimistic, but their sizing was pretty darn accurate. 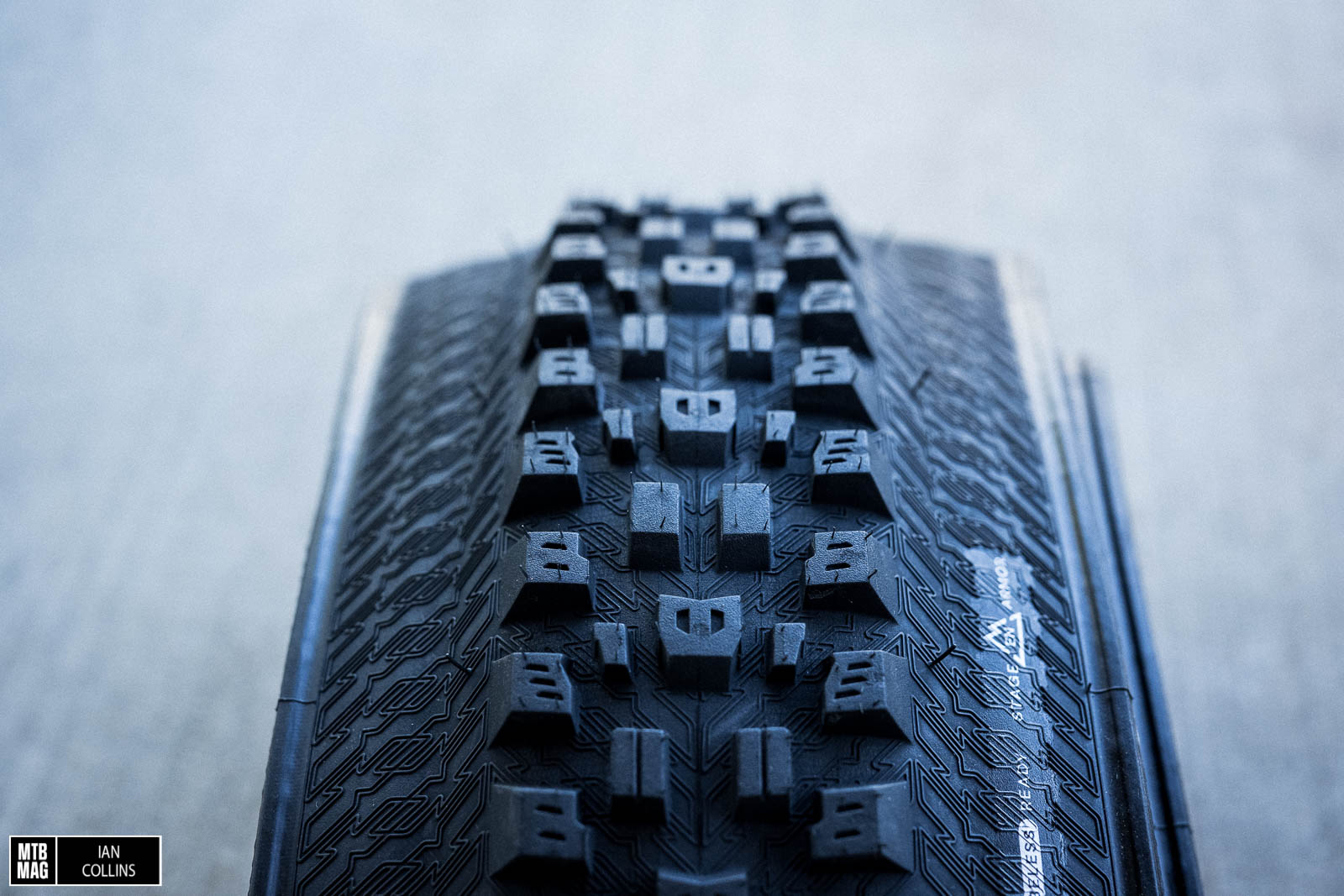 Each corner knob is notched out on their leaning edge(s), but the shape and location of the notch (and sipes) alternates. The same can be said for the main center knobs – every other set features a vertical sipe and wider spacing compared to no sipe and tighter spacing. The leading edges of all of the center knobs are ramped for improved rolling speed and 90º for braking power. 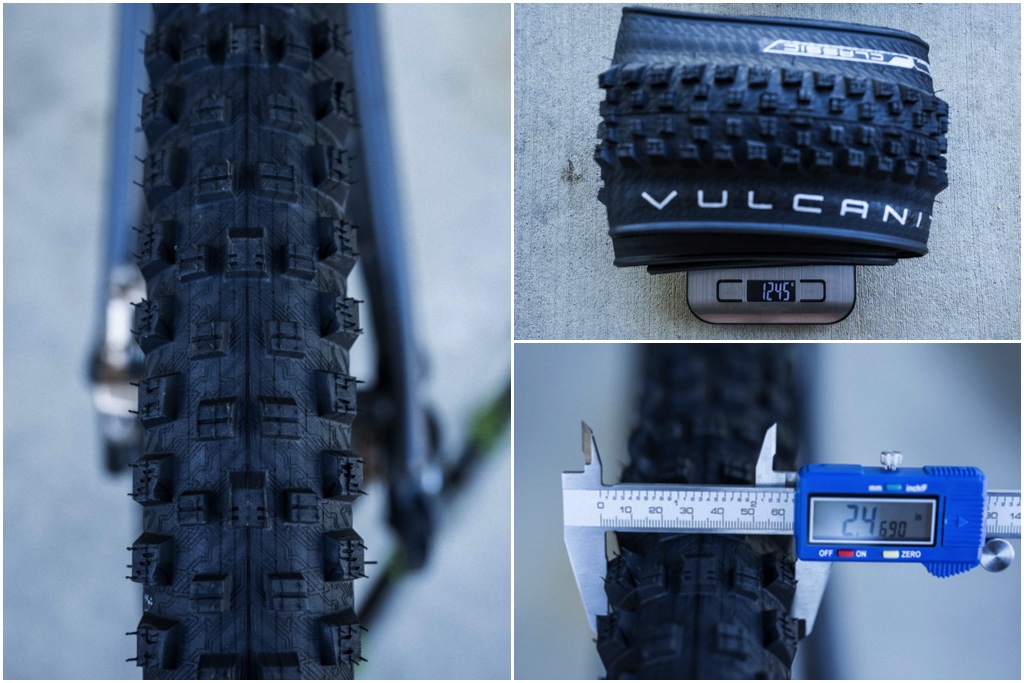 The Vulcanite can be used either front or rear and like the Tectonite it reminded me of another tire – or maybe another two tires – but it took me a minute…It seems to be one part Specialized Eliminator and one part Maxxis Dissector. Regardless, I’m not here to beat up on American Classic…there are only so many ways to design a tire and the better they get, the harder it is to avoid crossover between brands.  Anyhow – most of the siping on the Vulcanite is horizontal, so that tends to help with climbing and braking, but less so with off camber and corner performance. As regards the weight and actual size, it’s about on par with the Tectonite… 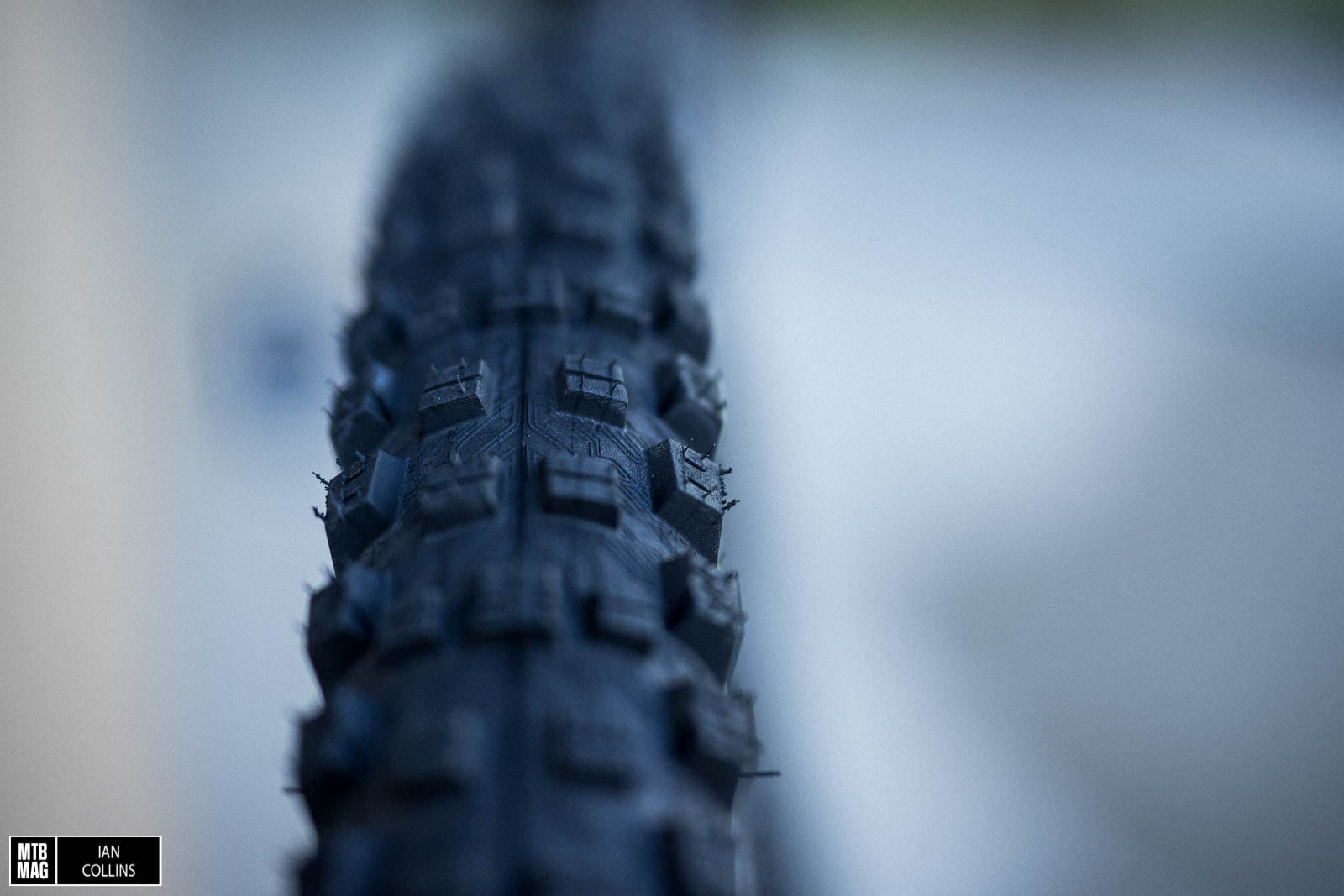 Unlike the Tectonite, the Vulcanite sees every other  side knob’s inner surface notched out – the rest are flush. The tire’s center rows follow a 2-2-3 pattern much like many others do these days.

So, as I mentioned earlier, I’ve had very limited time on the American Classic tires as they showed up just a couple of days ago. Starting with the essentials like casing and compound. At 1,250 grams I found the weight and duty of these tires to be refreshing for an Enduro tire. All too often I end up with an Enduro rated tire that is either around 1,100 grams or 1,400 grams and find myself wishing for something in between.

These tires seem to strike a happy balance…As far as the compound goes, it will take some time to see how they wear and how they perform in adverse conditions – I’ve only ridden them on dry terrain. Giving the knobs a less than scientific test by feeling them with my hands they seem to strike a nice balance between soft/compliant and supportive/durable but it will be a while til I can sign off on anything. A common complaint that I have with many many MTB tires is that there isn’t enough of a “slow” aspect to the rubber compound.

Michelin seems to have this figured out better than anyone with Schwalbe, Maxxis and now Specialized in the mix as well. When given a quick test, the compound American Classic uses does seem like it could stand to be a bit less snappy… 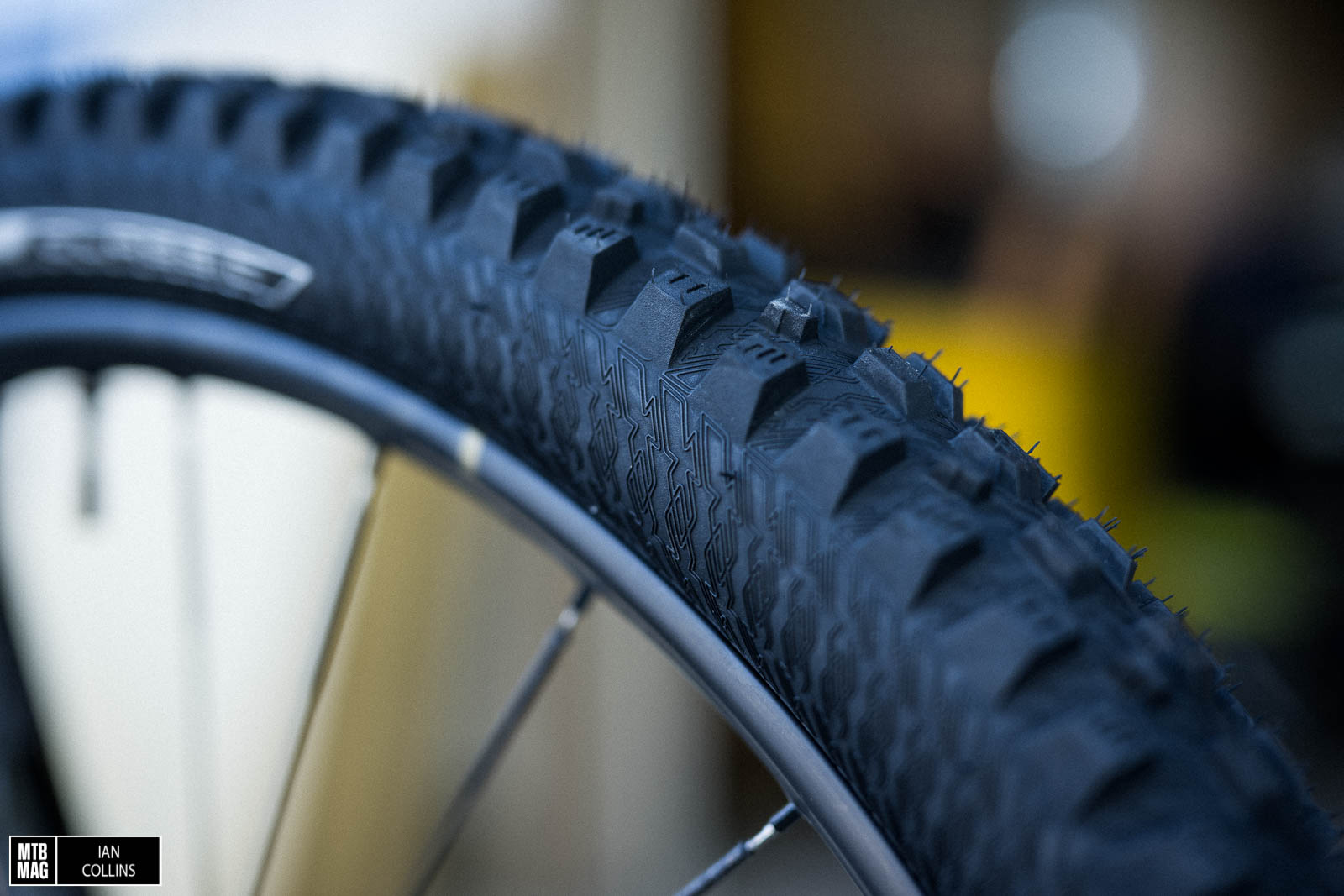 Interestingly enough on my first ride I set out making a point to really pay attention to feel, but quickly didn’t even really notice these tires. That is actually a good thing as they felt very familiar and I was unconsciously confident in them. On the climbs I was impressed with the rolling speed – both from a drag aspect as well as from the rubber compound’s standpoint. I do think the ramped and not overly tall knobs help in this regard. One thing I did notice was that the Vulcanite boasted a freakish amount of climbing traction in steep and loose terrain.

This is an element I often don’t pay much mind to when it comes to Enduro rated tires as climbing isn’t much of a priority, but I noticed the rear tire digging in aggressively right away. This surely has something to do with its abundance of horizontal sipes. As I cruise down the trail in the low 20 PSI range up front and the mid 20 PSI range out back I felt excellent support and was further convinced of these casings’ level of protection. Once I hit the descents the tires quickly became second nature and I didn’t really notice them. In a word I would describe them as predictable.

Then upon getting in over my head and overcooking a steep, loose section I did notice that I was able to shut things down really quickly – particularly up front where I realized that the standout feature of the Tectonite is its braking power. Another interesting aspect was that on the loop I rode, there is a very firm hardpacked jump trail with a dusty top layer which can feel very unpredictable and hard to read. I did notice that my cornering traction was greatly improved compared to a bike I’m currently riding with Maxxis DHR 2 tires as well as my personal bike with Schwalbe Magic Marys.

Once again this is all based on just a couple days of riding, but so far my first impressions are very good. I would like to see a touch more slow rebound in the rubber, but I am very impressed with the duty level as far as the casing thickness is concerned – it’s just enough that it’s manageable for big climbs but it’s not so thin and light that it will flat easily.

While I’m sure American Classic might take some lumps for releasing tires that look eerily similar to top selling tires that are already on the market, I am sympathetic to the fact there are only so many ways to design a good tire. Above all, I have to commend them for finding a way to bring these treads to market for less than half the cost of your average Maxxis, Michelin or Schwalbe. That right there is their best attribute. That they were an afterthought on trail leads me to believe that they will be a solid performer in the long run, but I do want to spend more time on them to ensure that holds true. Stay tuned…

Nicolai Nucleon 16: a High Pivot With an Innovative Drivetrain