Today, Canyon – a German direct to customer brand – presents the new version of Spectral, one of the best sellers in its range, entirely revamped both in design and in technological solutions. We were invited to Madeira for the official presentation, during which I was able to test the new Spectral on a long and intense day of riding. Let’s go over the finer points of the Spectral in every detail. 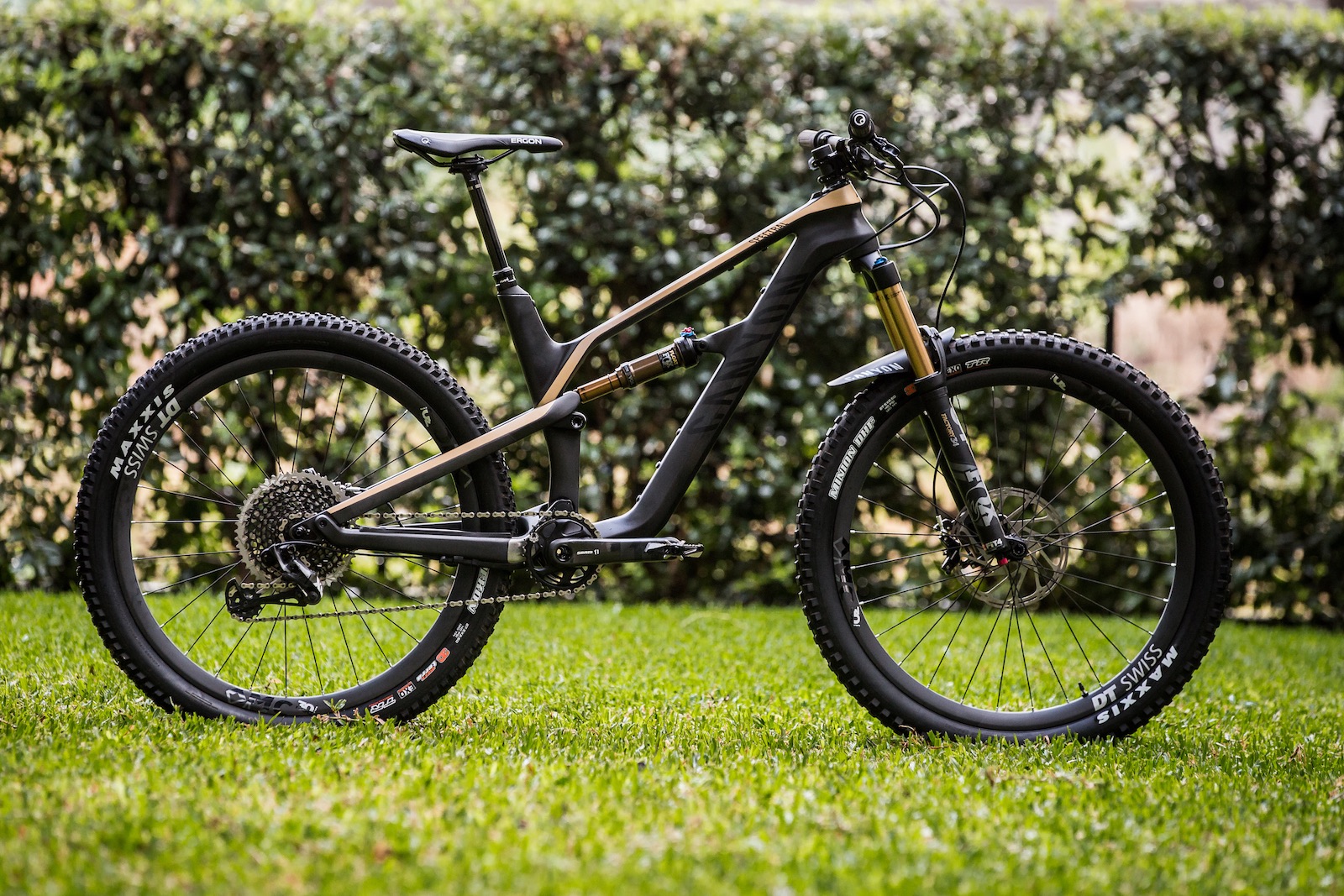 First, let’s spend a quick moment on the intended use that Canyon has designed and built the new Spectral around. By their definition, it is meant to be a “fun trail bike”, in other words a bike created 100% for a good time, inspired by the usage of EWS rider Joe Barnes, in his video adventures of the Dudes of Hazard. So, what makes a trail bike fun? A mix of aggressive characteristics like maneuverability, agility and a lively suspension but also the chassis’ own characteristics such as strength and reliability that are able to keep the bike in the workshop as little as possible and on the trail as much as possible. This was the aim of the Spectral … and yes, Cayon has hit the target! 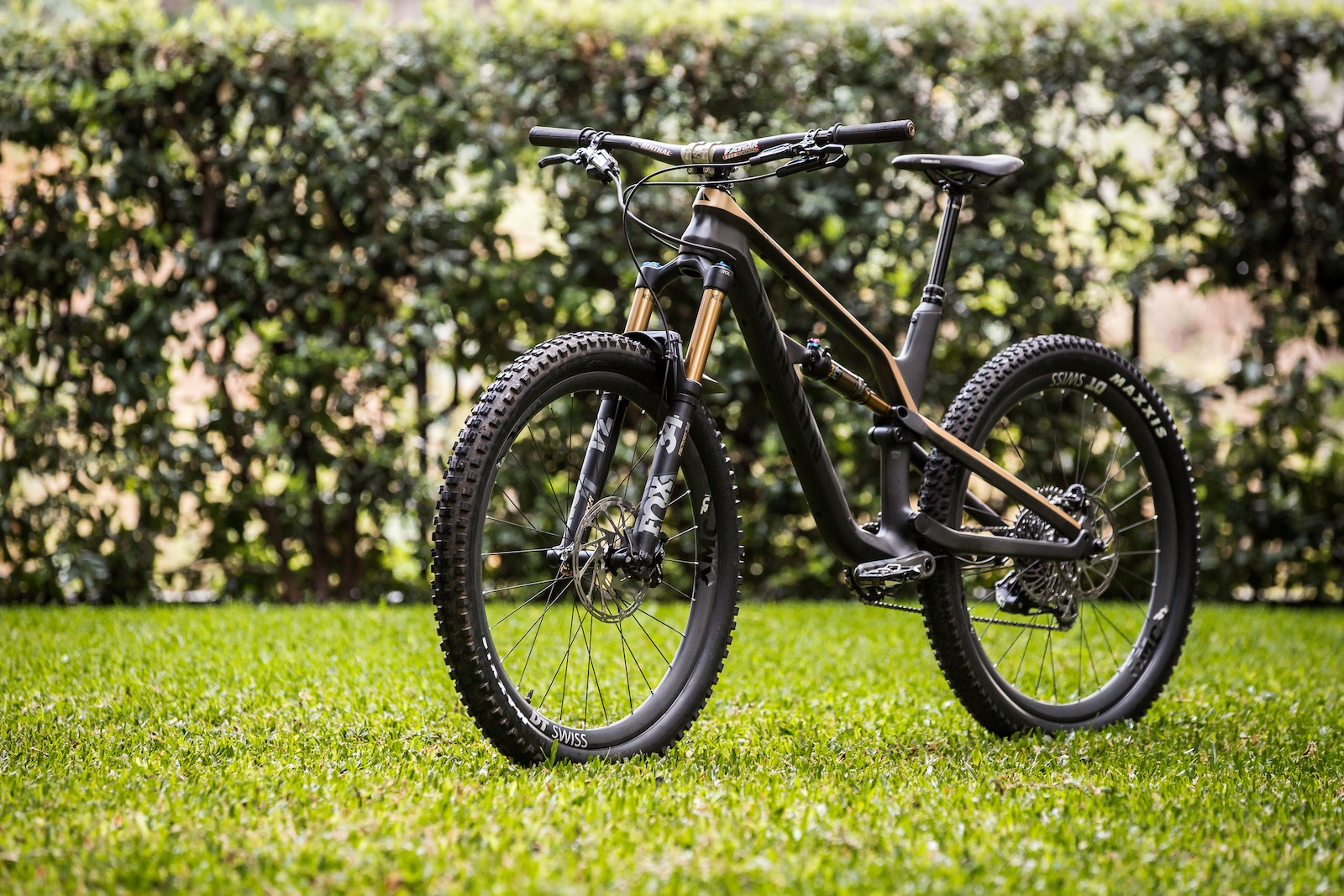 At this point of the article many will already be wondering about the Spectral’s wheel size. Well, being a model devoted to pure fun and absolute manageability, after several evaluations and tests Canyon have opted for 27.5 “wheels with 2.6” section tires. From what I could understand from the cryptic answers of the German engineers, however – sooner or later we will see a version, or even a new model, with 29 “wheels. Before finally opting for the 2.6 “size, they also tested 2.8” Plus tires. the best compromise between grip and handling was found, without an excessive weight increase and without the typical shoulder weakness of Plus tires. 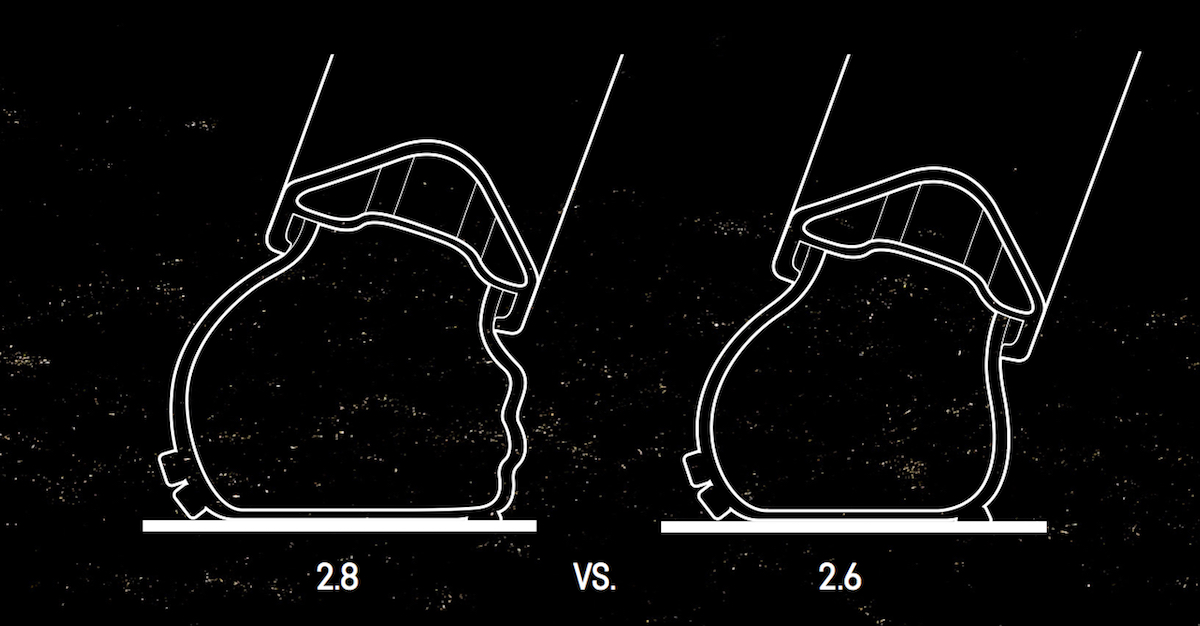 Design is one of the key points of Spectral and the new direction that the entire Canyon range is taking. The new Spectral features a distinct style that carefully recalls what was launched with the Sender, made up of futuristic, geometric lines, balanced with symmetrical proportions. For their design work, the Canyon designer team received the Red Dot Award 2017 as a Design Team of the Year. 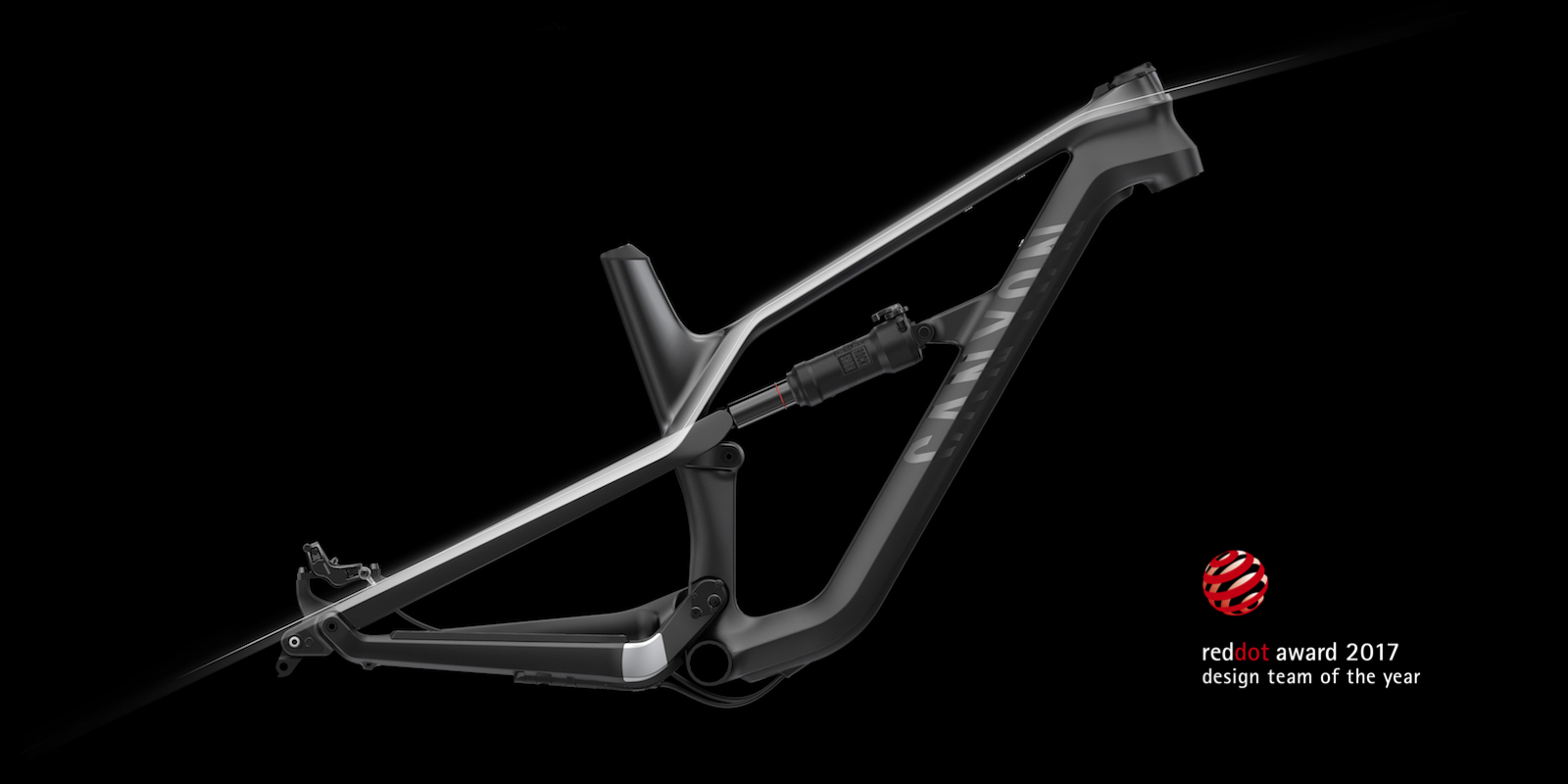 The new Spectral is built on 3 different frame versions based on the materials with which it is made. The Spectral CF SLX frame is entirely made of unidirectional carbon. The CF frame, on the other hand, has the same front triangle as the CF SLX version but uses a 6066 aluminum alloy rear end, the same alloy with which the entire Spectral AL chassis is made, with sturdy and lightweight hydroformed tubing that maintains the same design of the carbon model in terms of aesthetics and lines. The particularly solid construction of the Spectral allowed Canyon to include it in category 4 in their internal classification as it met the highest standards of stiffness and robustness of category 3, which normally indicates the Trail segment, only it has the same standards as their Enduro bikes.

The 140mm travel suspension system relies on the tried and true Horst link that characterizes all Canyon bikes. However, the kinematics used on the Spectral have been completely revised regarding the size of the linkage hardware and the positioning of the pivot points. First of all, it uses a much smaller linkage, which means much less stress on the bearings. The shock was positioned horizontally unlike the previous model in which it was vertical. The Horst pivot is positioned much higher, above the rear axle and in line with the upper link and shock absorber. The new positioning of the pivots allowed Canyon to optimize the anti-rise and anti-squat levels, but above all allowed them to manage the compression curve according their new concept: the Triple Phase Suspension, which was born with the Sender and will be characterized by all of the new Canyon bikes. This is basically a compression curve that divides the travel into 3 phases. First: the zone of sag, is characterized by a high leverage ratio able to easily activate the shock and make it very sensitive to small impacts. The second part, the central part, with stable and supportive behavior, guarantees reactivity to the suspension in the mid stroke. The third and the final one, has a moderately progressive ramp that allows you to take full advantage of the travel, but it isn’t so progressive that it doesn’t use all of the  travel. This way, you can still change the bottoming resistance with volume reducers and fine tun things to your liking. S and XS bikes feature their own, lighter weight tune, with which the compression curve is also modified to adapt to the riders with lower weights. All pivots work on sealed bearings and have wide spacing. Moreover, all the bearing seats are sealed thanks to special covers that isolate and completely protect the bearings from the outside and consequently from water, mud and dust that could otherwise infiltrate, creating an early wear.

The through axle for the Boost 148×12 rear hub is a product specially made by Canyon. It looks like a lever-free thru axle for quick release but in reality the lever is hidden inside. You can notice “pull” is discretely written on the head of the axle itself. 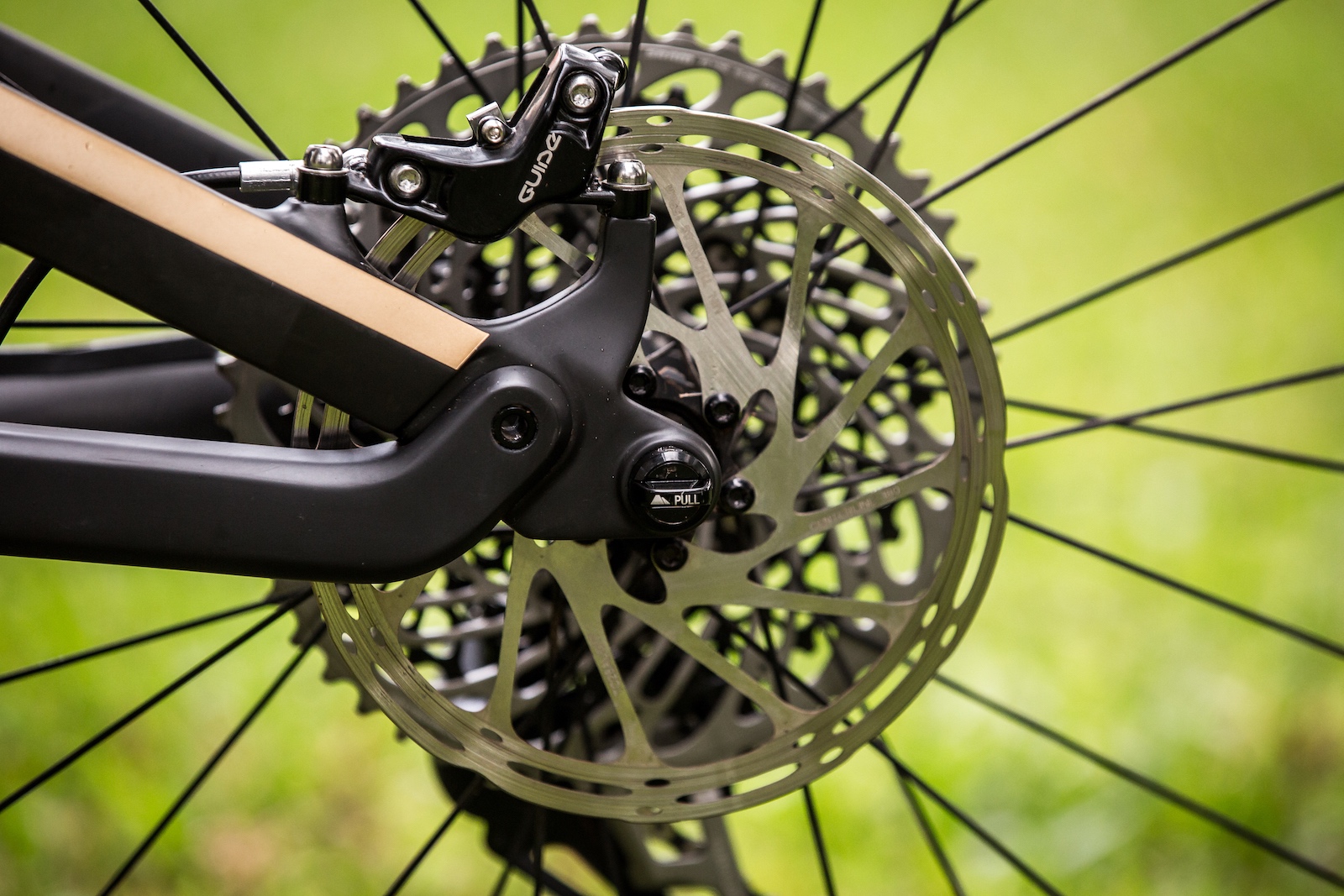 Pulling the head reveals a lever that is positioned in the axle and this allows you to easily remove the wheel shaft without the use of tools and without fixed QR levers that are likely to blow up in the case of a fall due to their increased exposure, besides being unsightly. 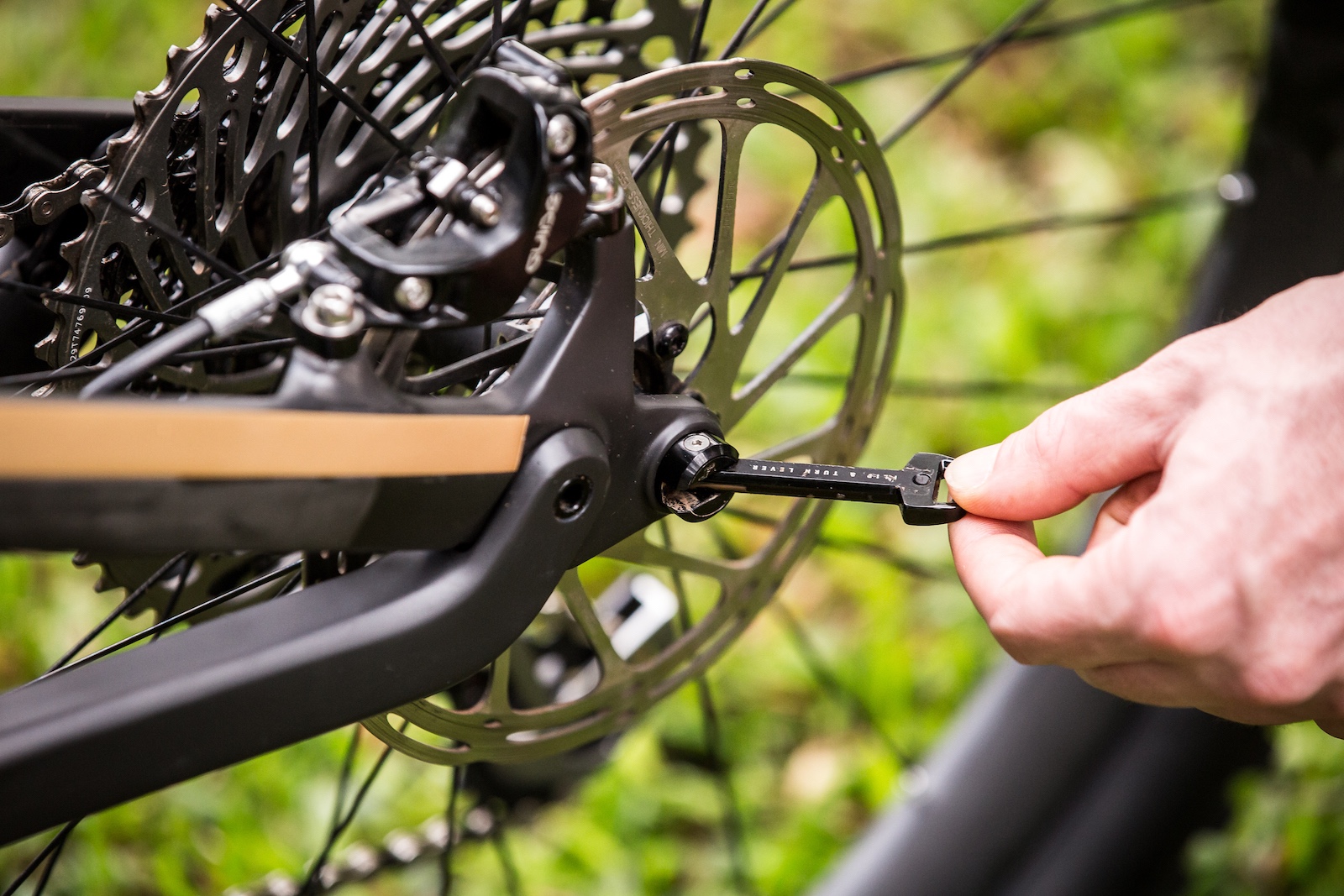 The solution for internally routed cables over the years revealed some limits such as noise and difficulty in the case of maintenance. The classic solution instead, with the cables fixed to the outside of the frame, is often unsightly. Canyon has therefore thought of a rather innovative solution to the routing of cables,  blending both traditional systems. It is a channel in the lower part of the downtube and secured by screws in the frame. This way all the cables are hidden from view but well fixed and easy to reach for any type of maintenance. The sheath is made of a special soft, but sturdy plastic like the one used as protection for the Sender down tube and it also serves the purpose of protecting the frame from impacts. A simple but truly brilliant idea. 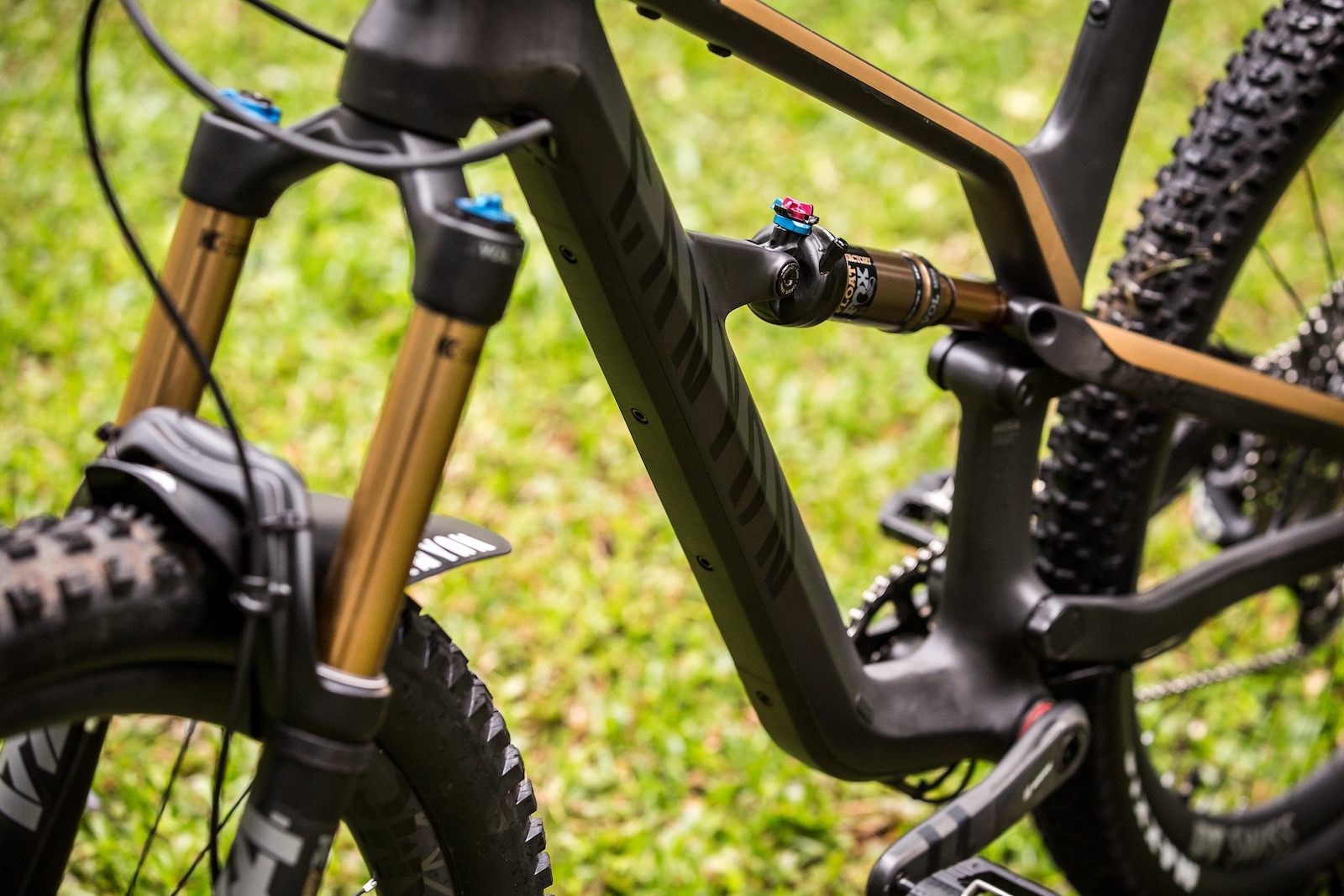 The Spectral frame offers 3 holes for the bottle holder, covered with rubber plugs that take care of the aesthetics in case the bottle holder is not used. Considering the available space due to the position of the shock absorber, Canyon offers as an option, a side-mounted bottle holder for sizes medium and up. 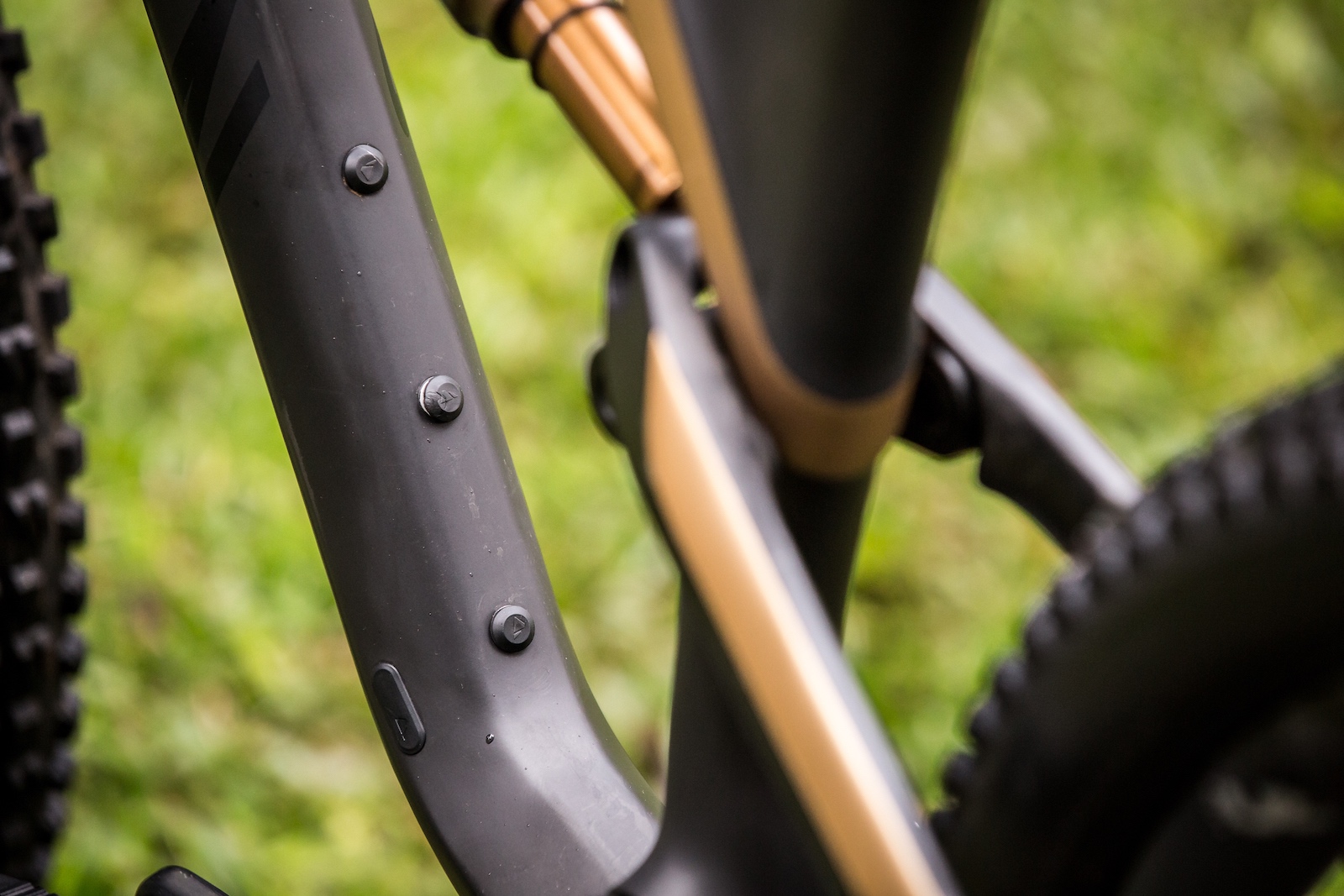 However, to accommodate a water bottle even on frames in size S and XS, where space is further reduced, there is another very interesting option: the double bottle cage Eject System. This option can also be used on all other sizes, and is fixed to all 3 holes in the frame thanks to the long perforated slide of which the bottle holder is equipped. It is able to firmly hold two 400ml bottles which each offer the possibility of being filled both with water or one and the other with supplements, or  tools and spare parts, food or a windproof jacket. 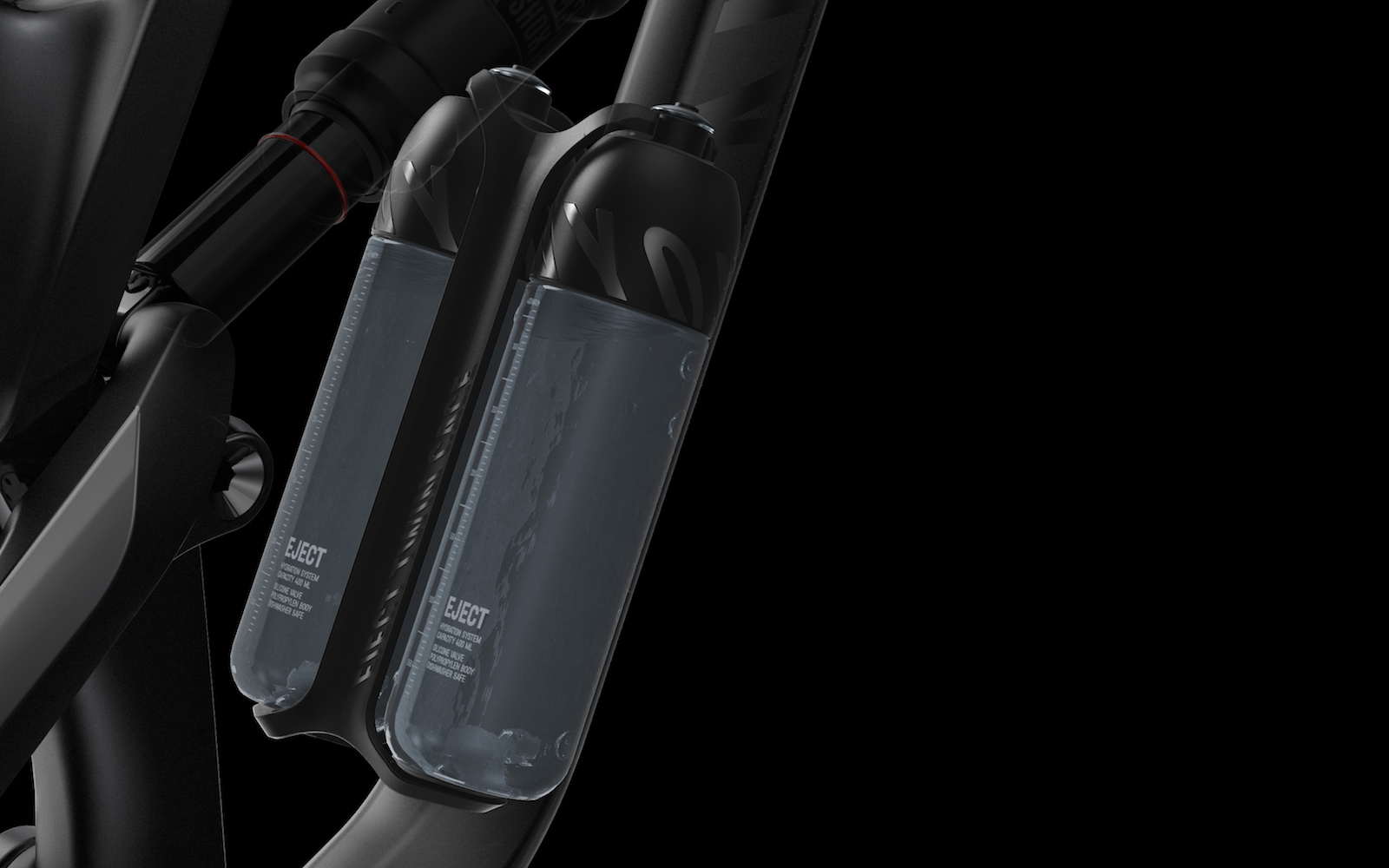 About the container, Canyon has also thought of another solution that helps you ditch the backpack or at least reduce the load on your shoulders by taking advantage of the space on the bike. This is a triangular plastic box at the intersection of the top tube and the down tube. 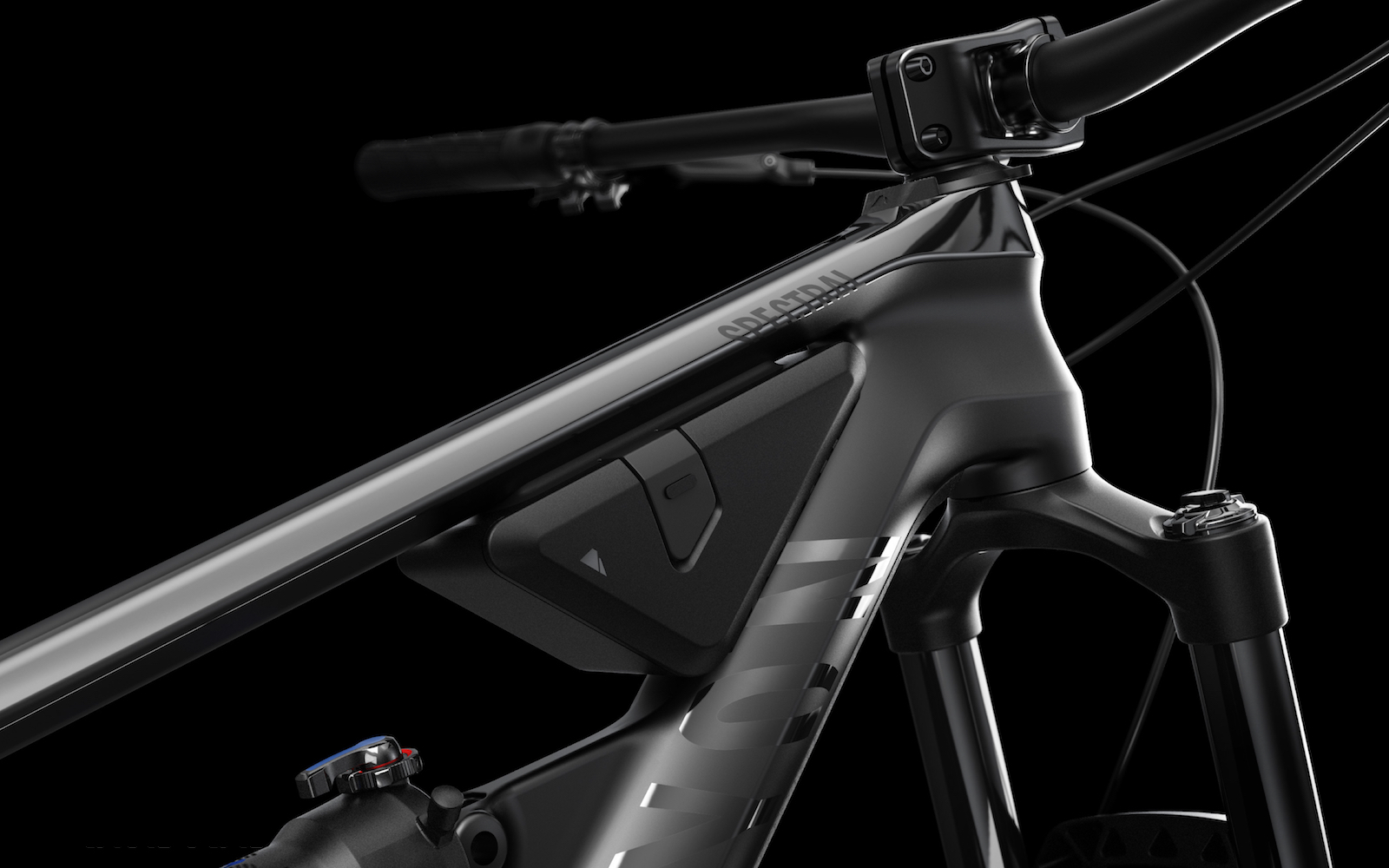 The storage compartment is firmly fixed to the frame by means of a threaded hole on the down tube and two threaded holes on the top tube. The screws are plugged with rubber protection that keeps the aesthetics nice and tidy when the container is not mounted. 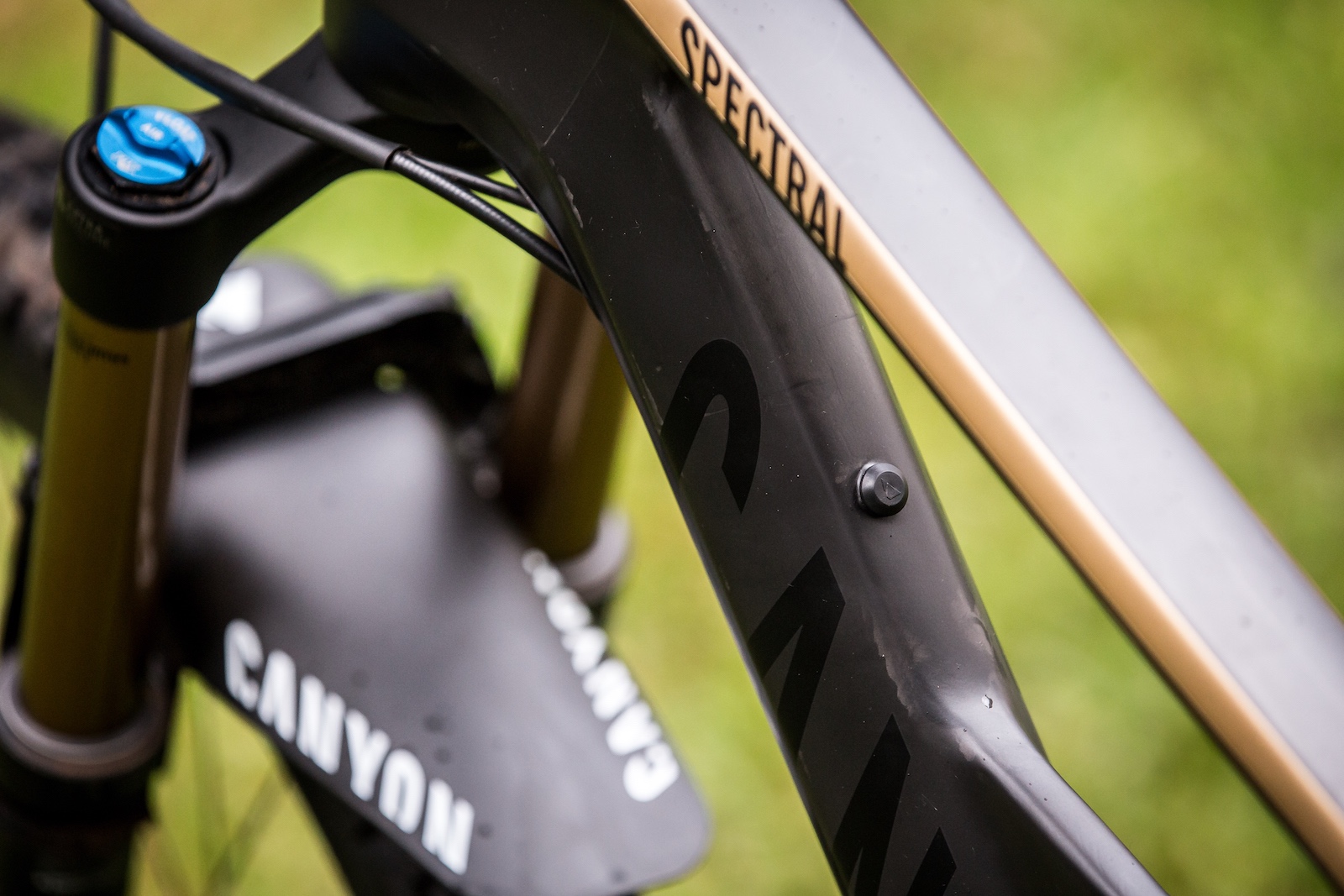 The presence of the IPU system (Impact Protection Unit) patented by Canyon for the previous Spectralmodel blocks the rotation of the steerer tube and prevents the handlebars and controls from impacting the frame in the event of a fall. The screws that fix the block are hollow and their breaking load is designed so that they can break in the event of particularly violent crashes, preventing the frame from being damaged in the area where the block is screwed in. The IPU system however is completely removable in case you prefer not to use it. Canyon on the new Spectral eliminates the seatpost collar with an integrated system different from the traditional systems that secure the seatpost by pinching it. In this case, inside the frame there is a bracket that, by means of an Allen screw, presses the seatpost against the frame, locking it firmly. The fact that  it presses instead of tightens should in theory have less repercussion on the operation of dropper posts, particularly if you tend to overtighten things. With this system Canyon is able to ensure a clean and tidy design to Spectral. The greater size of the seat tube and its shape are able to provide structural rigidity without the need for further reinforcement. Additionally, everything is nicely sealed off from the elements. As anticipated from the beginning, the presentation and then the day of testing the Spectral took place in Madeira, on numerous trails including those who hosted a stage of the Enduro World Series in 2017. We were not particularly lucky with the weather since it rained practically all the time, with heavy showers of water that made the ground extremely muddy and slippery. However, the Spectral also allowed us to have fun on the trails transformed into the Scottish conditions that made Joe Barnes (the Canyon Factory Enduro Team racer who was our guide) feel very much at home, for this occasion. The new Spectral maintains the promise of being a “fun trail bike”, being extremely manageable and precise, with a clear hunger for playful and lively riding style. The geometry is balanced and allows it to be incredibly intuitive and easy to understand, walking a very fine line between stability and agility. On the Madeira trails we had to negotiate several very technical and challenging sections, especially considering the rainy and muddy conditions, and Spectral was always reliable and intuitive, providing confidence and security. A detail perhaps negligible but enormously appreciable from my point of view is the total silence of the bike, which allows you to enjoy the simple sound of the tires on the ground without being distracted by noises, rattles and squeaks: a luxury that does not happen very often. The suspension system is effective in all conditions and is reactive but at the same time very stable thanks to a well thought out, moderately progressive and well calibrated compression curve in each phase. Often I forgot that I was riding a Trail bike, feeling more like I was on an Enduro. I would not be surprised to see Joe Barnes riding this bike next year on some EWS stages. We didn’t do all that much climbing, but it was enough to understand that Spectral knows how to behave well even under power, with a stable suspension platform that allows it to pedal efficiently, even with the shock in the open position.