It doesn’t take long to realize that the Alutech ICB2.0 is a unique trail bike. It was conceived by taking into account the opinions of 2000 internet bike enthusiasts in Germany and following up their comments and recommendations with a design that would help mould the bike into the ultimate crowd pleasing trail bike. 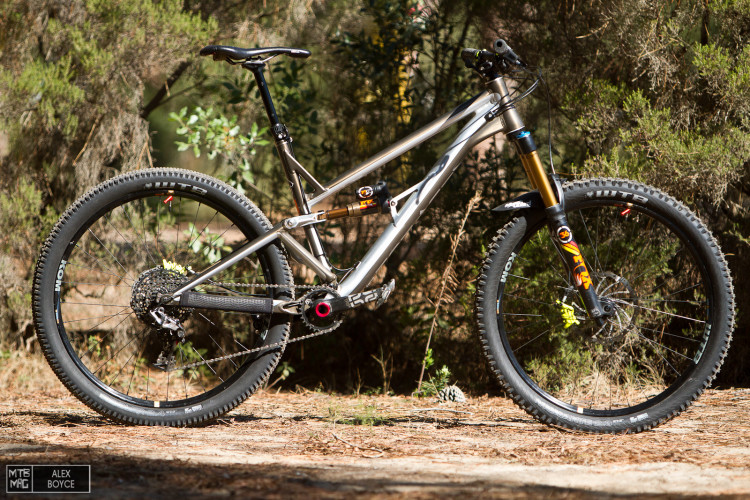 The task took two years and 150,000 comments and follow ups. Over the last days we have had time on the ICB2.0 getting to know the opinions of the public and the type of bike these opinions have produced.

The geometry  is about fun, short chain stays, long top tube and a 66.5 degree head angle.

This is the core of the bike that has been outsourced to public opinion, who tried and came up with their idea of an ideal bike that is fun to ride. Alutech wanted a trail bike specifically, that is why 130mm of rear travel has been specified. The frame is a single pivot design where the shock is link driven. The idea of this was to give added smoothness to the progressive nature of its shock curve. 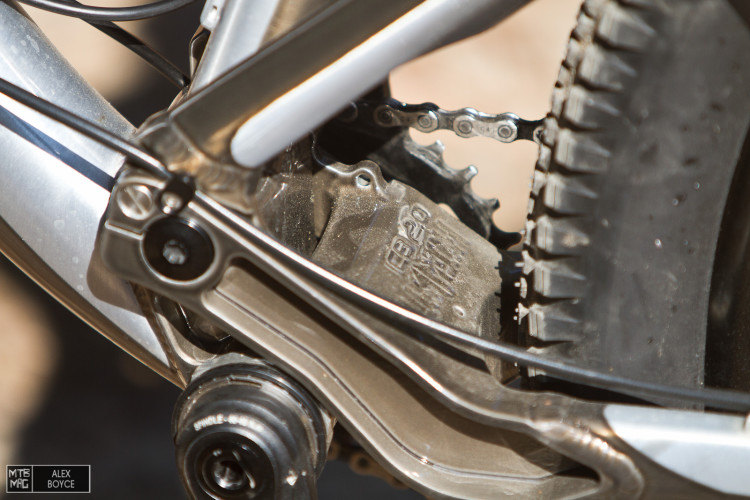 Well designed frame elements include this CNC piece that takes 3 hours to produce.

The rest of the frame is crafted around CNC aluminium parts and precisely welded tubes with a balance towards a long front end and short chain-stays. The large size we tested felt roomy up front, was light enough while feeling sturdy at 13.4 kilos, with the custom build kit to handle a wide variety or trail types. The frame was rigid and gave a balanced ride – it worked well with the 150mm front fork. We’d describe the geometry as comfortable, the 66.5 degree head angle felt just right for fun trail riding. The lower chain-stay pivot is a CNC section that looks strong and gives the bike a nice aesthetic, and a smooth direct feel to any inputs from the terrain or rider. The progressive nature of the rear suspension can best be characterised by its resistance to bottom out. The ramp can be felt particularly when landing a jump. It feels like you have more than 130mm of travel. The mid stroke support is lively but not uncontrolled, an ideal compromise from the frame designers.

The wheelbase of the bike is a touch on the short side, which shows it was designed to be capable enough for short periods when the going gets tough but be flexible enough for playing around on less technical flow and typical woodland single trails. It is definitely not an Enduro race bike.

The frames finish is high quality in all aspects, with a truly unique paint scheme. Welds are well formed and solid showing a significant degree of care has gone into the production of each frame. Cables can be run internally or externally, pleasing all types of rider. The rear triangle’s single pivot point is held together by a pinch bolt system to ensure that it stays as smooth flowing as possible, yet stiff as there is very little sideways binding force on the bearings in the pivot. The frame hardware is titanium which gives a lift to the frame finish and you feel you are getting more value for your money. Our grey/gunmetal test version looked really good. 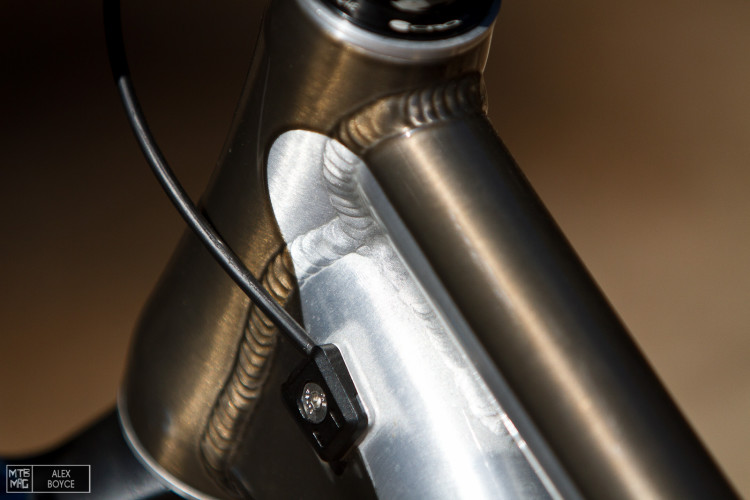 Close up the finish is exceptional.

The idea of the ICB2.0 is to appeal to many types of riders. Hence why the frame can be fitted with either a 150mm or 130m fork depending on the headset type utilised. Ideal then for those who want a light weight front trail fork like a 34, or great for those who want the opportunity to get a bit more rowdy on the trails with 150mm of travel with the Fox 36. We tried the 150mm set-up. The Fox 36 felt stiff, connected and precise on the bike. Damping was just right for the trail riding set-up of the bike and when it got a little bit harder we always felt we had plenty of margin for error. The Fox’s stiffness felt particularly good in snappy corners, especially in combination with the shorter chainstays which followed quickly in corners. 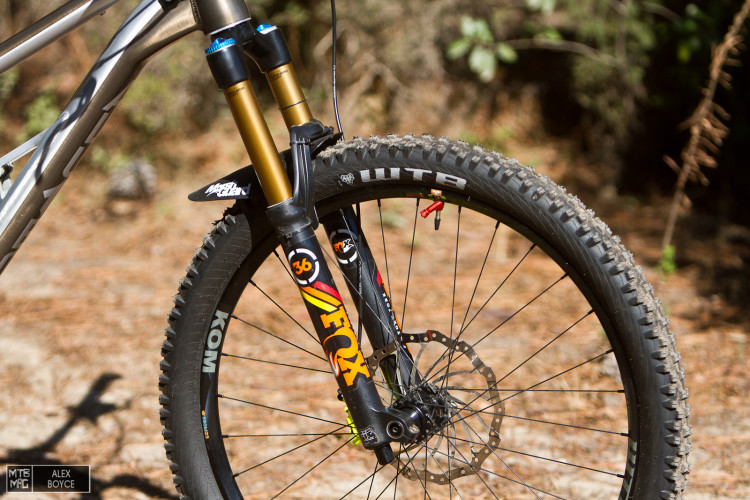 The Fox X2 rear platform is well tuned and did not bottom out on us when we pushed the limits. It provided us with excellent mid travel support. The shock even when pedaling does not have to be in trail mode to pedal efficiently, which was a surprise for us, and a great indication of the well thought out kinematics. 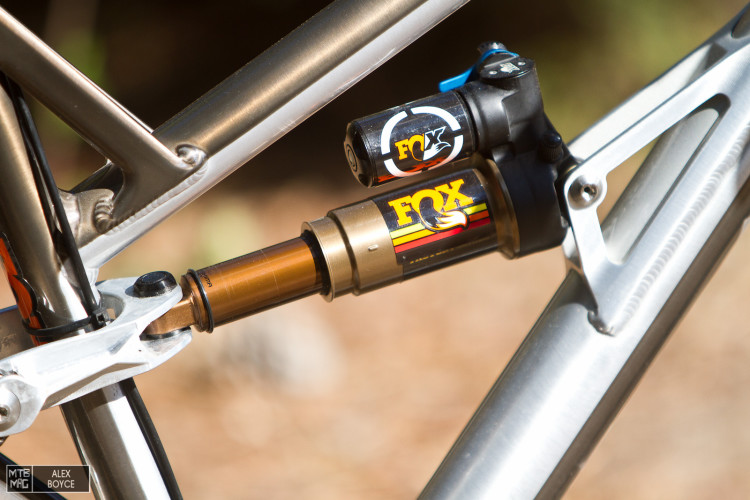 As we are more interested in the ride of the frame and did not have enough time on the bike, we can only comment briefly on component choice on this custom build. The frame was conceived as a custom build bike frame, so literally anything could be mounted on this frame including a direct mount front dérailleur even with the current trend towards 1 x systems. Our test bike came with XX1 gears and Magura Raceline brakes. Power was delivered by an E13 TRS crank-set with a 32T front ring. Nothing felt out of place and although we would have shortened the 800 mm bar by a few cm, the set-up was professional enough for us to concentrate on the frame and not be held back by component choices. 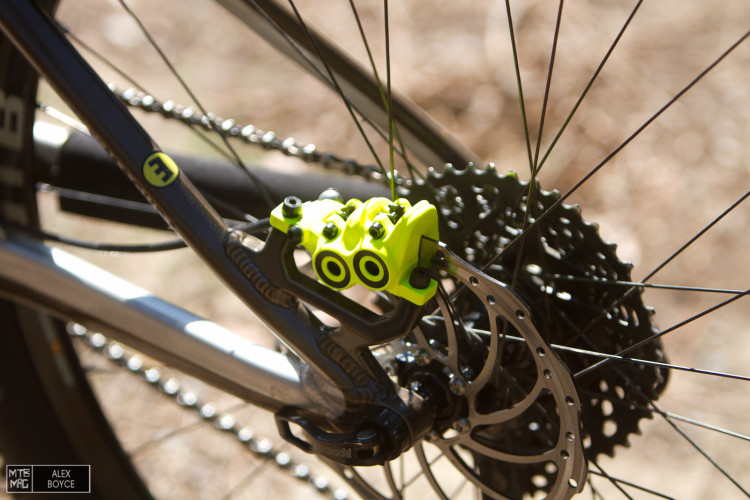 Magura Raceline brakes, powerful and precise for trail use and harder descents. 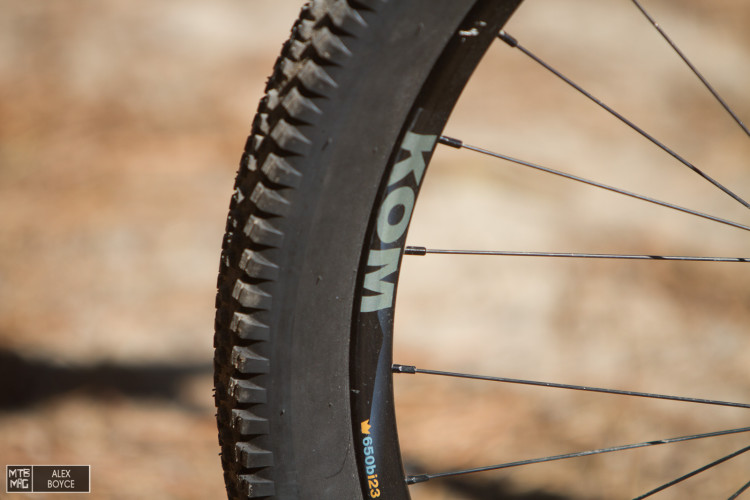 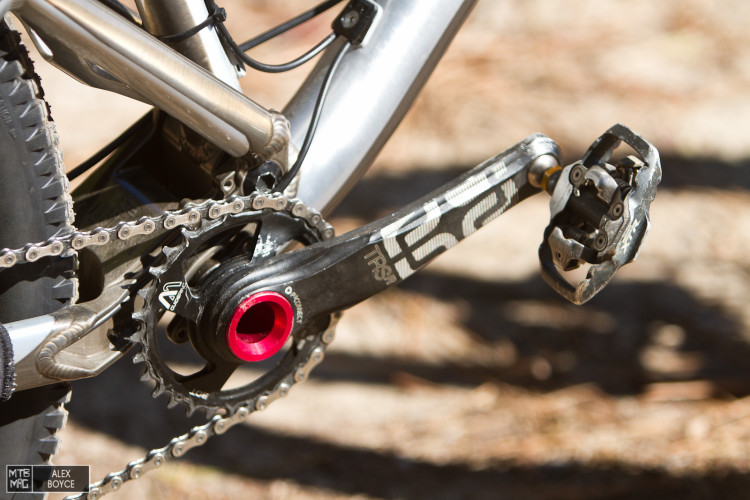 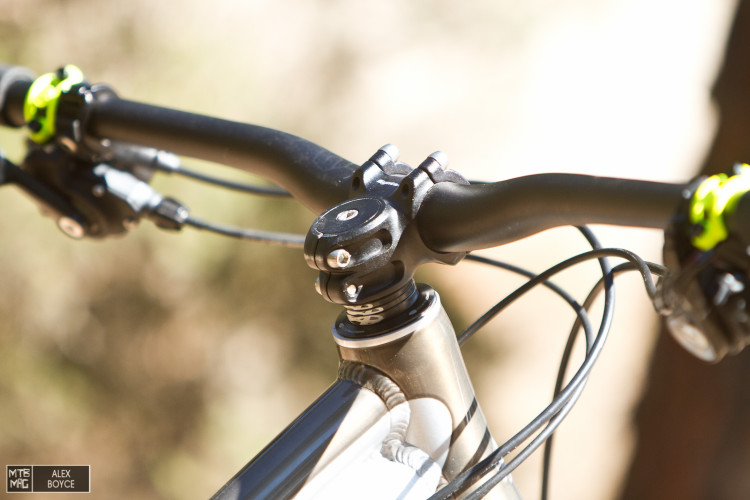 Alutech are planning on releasing some OEM specification builds, based around an undecided component group set from SRAM. These products will follow later on though in the production cycle. The main focus is frames at this point.

We rode a variety of trails at our Punta Ala test centre, and found the ICB2.0 to be fun in all of the varying situations we tested in.

Our main feeling about the bike when descending was how nimble it was at low speeds. Without going fast you could feel the trail beneath you and push off the various elements that you found, giving a fun, sprightly ride. Hitting small jumps and roots was a pleasure with the bike picking up quickly and remaining very stable in the air. The landings were smooth and under control. At no point did you feel the bike was on the ragged edge. Which for a 130 mm bike was pleasing. 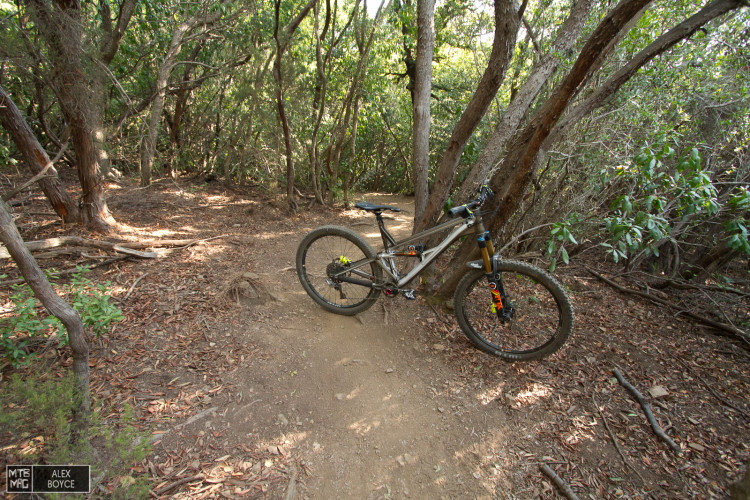 The ideal type of trail for the ICB2.0, fast, flowing up and down.

Cornering was really great, the front end of the bike stayed on track no matter how tight the corners were and the rear end followed around quickly remaining stable. At no point did you feel the front end would wash out. In technical corner sections the Fox 36 helped a great deal in maintaining stability if things were rough. The reactive direct feel of the single pivot rear end kept things responsive yet capable if there were a few bumps that caught us by surprise. This smoothness of the rear suspension has a lot to do with the torsion resistance of the rear shock connection. The linkage and shock are connected by a slightly flexible joint. This leads to any vibrations being cancelled out and any twisting of the rear triangle is not transmitted to the shock. Thus it can work smoothly as it doesn’t bind. We also noticed that brake jack was imperceptible during our short time on the bike. 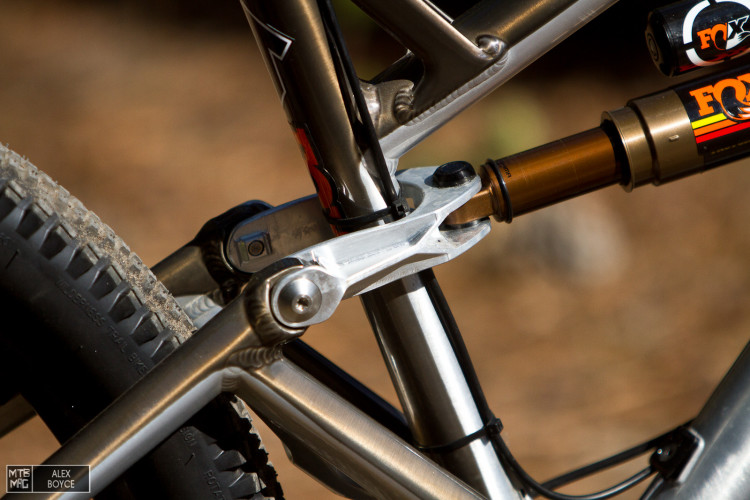 The joint between shock and link is flexible.

Uphill the ICB2.0 rode well. With a conservative head angle we didn’t experience that sluggish feeling that can occur with a longer travel more open angled bike. Cornering was as good uphill as it was downhill, and it was possible to pop over the technical trail features in our path on the way up easily with each pedal stroke. The bottom bracket height was an excellent compromise between low down stability and enough room to avoid rock strikes on the way up. The bike really excelled on flowing trails that tested all these characteristics, and soon became a firm favourite for us in the coastal trail area of Punta Ala, where trails consistently flow up and down. We did manage to take it for a short descent on a more technical Enduro style trail. In that environment we would say we could approach the limit of the bike but at no point did we feel uncomfortable. Yes the bikes top speed is not as great as an Enduro bike, but it was not designed for Enduro speeds.

For every designer, making the perfect bike is the holy grail. So it is interesting that Alutech have managed to create a bike that manages to do some many things so well based on the crowd’s opinion. As Alutech mentioned to us it was a very time consuming but enjoyable project. We would say based on first impressions that the bike would suit 80 percent of trail riders and has a bit left for those who can push the limits.

One of its key features is the fact that it can add a lot of fun to a normal trail. The bike pops well, jumps smoothly, corners quickly, remains stable and does all of this at low speeds. It encourages anyone who rides it to throw the bike about and really use the trail. Stability and smoothness were the two stand out features that ultimately led us to having a lot of fun on this bike when we started to move it about on the trail.

The fact that this bike is crowd designed gives it a ready made fan base. We think that many of the people who followed the project and had input about its design wont be disappointed when they actually get to try the bike. The fact that so many people were involved with the project is a definitive way to ensure that it also gains traction in the market place. The fact that the ICB2.0 can be ridden in a huge variety of trail bike environments by many different styles of fun rider also lends itself well to this project being a success.