While in Santa Barbara for the launch of Schwalbe’s new “Addix” tire compounds, Ibis was kind enough to provide us with their new Ripley LS for the day. As the third iteration of the Ripley, their 29″ wheeled all arounder sees a handful of updates such as new geometry, updated frame/hardware, increased tire clearance and more. After the details of the bike we’ll dive into our thoughts on it after a brief day on Santa Barbara’s finest. 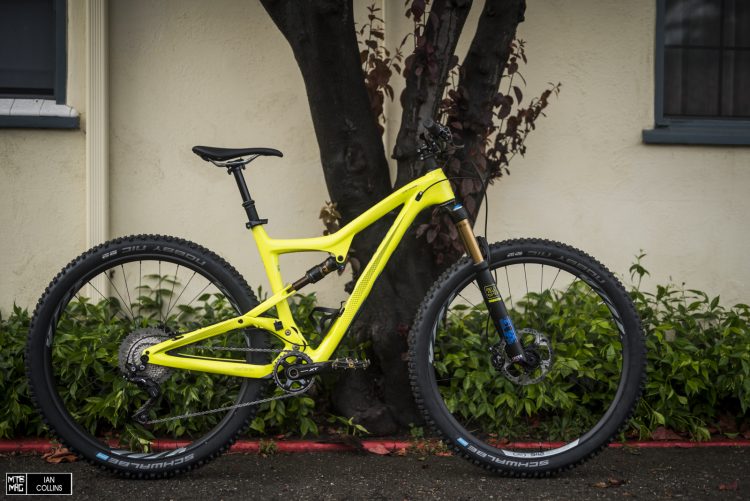 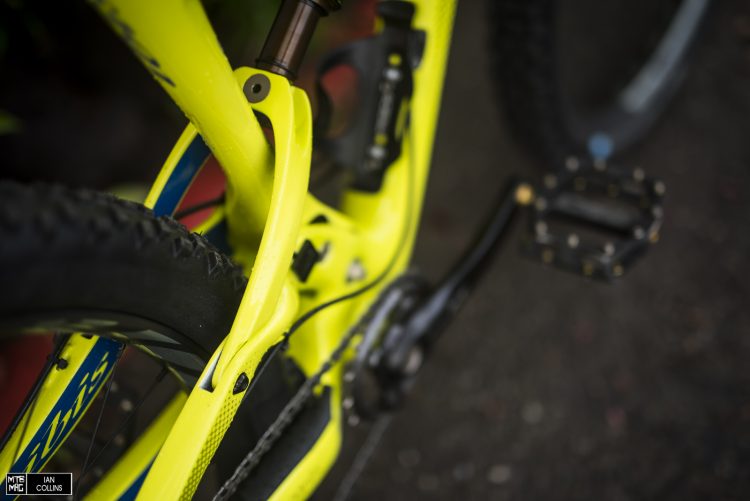 Aside from the basic overview highlighted above, the main updates are out back and in the middle of the bike. The rear end and clevis ( the link which drives the shock) both see an increased width which results in added stiffness and improved tire clearance for tires up to 2.6″ wide such as the Schwalbes that we tested. 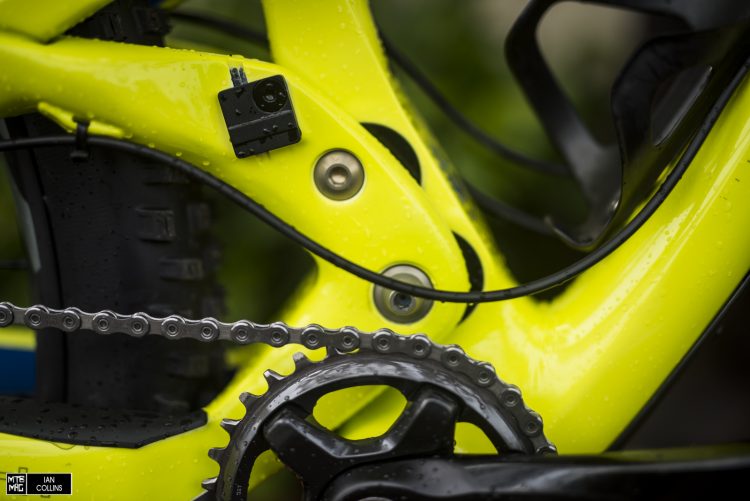 At the heart of the DW link suspension system, the upper eccentric now has a wider stance. This comes at the expense of 3X front chainring compatibility…But let’s be honest, in a world where 1X drivetrains can offer a 500% range, who cares? As you can see above, front derailleur die hards can still bolt one up and run a 2X system if they prefer. A point worth making is that the new upper eccentric is the same width as the lower one. Perhaps, if the parts are identical, that can help bring down production costs.

The Ripley LS was a longer, slacker update from the original Ripley, hence the “LS” part. As for the first part, in this day and age, the Ripley LS was really all that long. In actuality it’s quite short.  For example, the reach on the Extra Large Ripley is 9mm shorter than the size Large Transition Smuggler ( a competing short travel 29er). As for the slack part, 67.5º is nothing to scoff at, and maybe two years ago it was considered slack, but we’d say that nowadays it’s the norm for a 29″ trail bike. The point being, it’s not that aggressive. 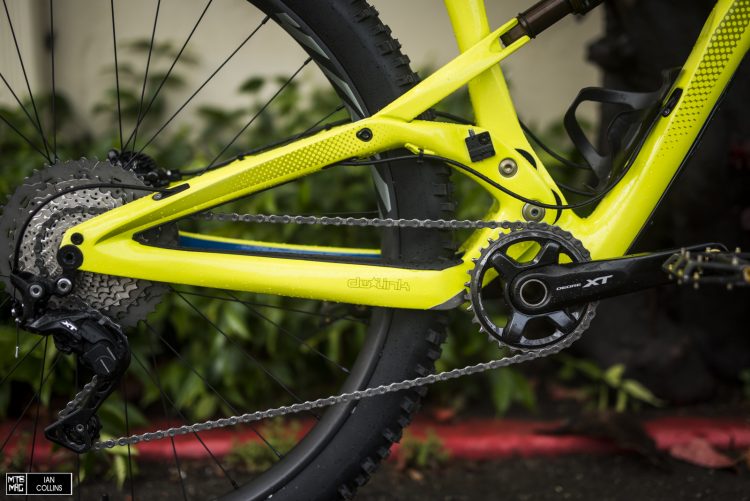 At the back of the bike, to make room for 2.6″ wide tires while still accommodating the DW-Link, the chainstays had to grow from their already long 442mm length up to 444mm.  To put that into perspective, that’s just over 4mm longer than a Santa Cruz V10 DH bike. At the heart of the bike, the seat angle is 73º which is pretty average. It’s not so slack that you feel like you’re hanging off of the back wheel, but compared to some of the current offerings that come in around 75-76º,  it definitely doesn’t have much of a forward bias that riders are looking for. Keep in mind however that comparing seat tube angles from one bike to another can be a bit apples to oranges. These comparisons can be vague due to varying rider inseams and how that relates to bikes with super slack seat tube angle while still having somewhat steep “effective” seat tube angles. 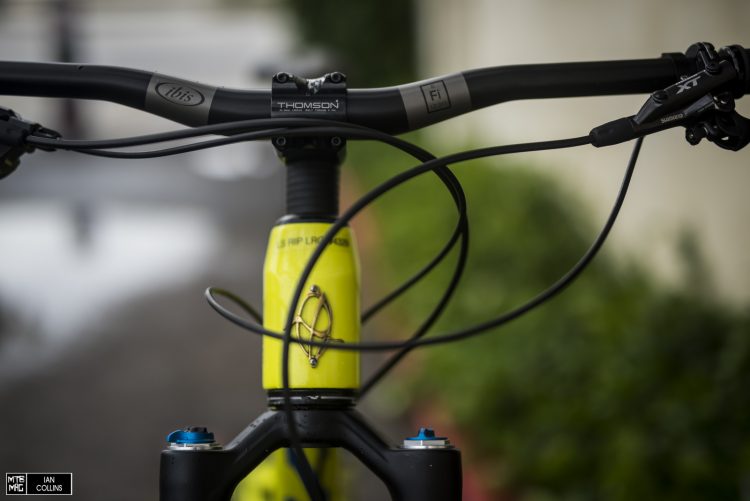 Up at the front of the Ripley, we found the front end to be quite low, even with an external lower headset cup. This is mainly due to the short 102mm head tube. We had to go beyond using all of the headset spacers under the stem and actually swap out the oddly spec’d flat (and rather narrow) handlebar to a one with a bit of rise just to feel a bit more comfortable knowing full well what was ahead on the trails in Santa Barbara. Anyhow, let’s see how our first impressions were once we hit the dirt…

After setting sag and getting our cockpit somewhat sorted, we were off. The first trail that we rode was Romero. As a shuttle, it starts out by traversing back and forth across a fairly exposed section of the coastal mountains of Santa Barbara. After an exceptionally wet winter, taller than usual grass shrouded the already tight singletrack at around chest height. We started out with fairly high pressures in the 2.6″ tires and due to their high volume, right away we began to work our way down. Better safe than sorry though…The first few straightaways were kitty litter style gravel that had just been freshly peppered with a morning rain, providing flawless conditions. Most of those straightaways feed to “stab the brakes style” 180º switchbacks which came up quickly. In these turns, we weren’t exactly impressed by the bike. Our 6′ tall tester felt that the short front end would prove to be rather nervous, and in combination with a super long rear end, it was difficult to bring the rear end around with a sense of command when you wanted to snap the turns off.

As for component choice, we were pleased overall. The Shimano XT drivetrain provided ample range and solid performance, but didn’t quite have light shifter action, nor the snappy feel that we’ve become accustomed to with SRAM groups. The Fox Float DPS rear shock was nicely tuned to match Ripley’s kinematics. Its trail mode was perfect for most of the climbing we encountered and in full lock mode, the bike was super firm, which was great for road/fire road climbs. Fox’s Transfer dropper post is absolutely stellar as is their new 34 fork. Ibis’ new wheels and their asymmetrical rim profile most certainly exaggerated the high volume in the tires while still providing a snappy, yet compliant ride. Like most bikes that we test, our major componentry gripes were with the cockpit. The seat wasn’t very comfortable and the flat, not so wide handlebar made us scratch our head and wonder what Ibis was thinking spec’ing them on anything but an XC race bike.

After Romero spat us out, we headed out for an hour plus climb that mainly consisted of rocky fire roads. At the end we were faced with a techy, overgrown section strewn with some offbeat climbs. While the bike was efficient in terms of kinematics, the punchy up/down sections of trail just didn’t quite feel right due to the odd weight distribution. Perhaps we should just spend more time on an XL, but with chainstays that long, we’re just not sure we’d really be that trilled on that size either. To be honest, while grippy on terra firm, the 2.6″ wide tires didn’t blow us away. They were bouncy and floaty on loose terrain. We’d prefer that Ibis would have used engineering resources to shorten the Ripley’s chainstays at the expense of fitting something like a 2.4″ max width tire.

Anyhow, on our second lap we got into Cold Springs trail which is a classic DH trail from way back in the day. It’s rough as guts so we approached with caution. While we can’t really fault the brilliant DW-Link suspension, the well constructed frame or the parts (save the cockpit) the geometry really just left us feeling puckered. The trails rough, boulder strewn sections and tight, techy turns just didn’t feel right under this bike. Again, perhaps we should have chosen to ride an XL, but at 6′ tall, our tester usually is and should always be a perfect size large.

While most short travel 29″ bikes might be slightly in over their head on the trails we were riding, we can think of a handful of the more aggressive ones that would be more than up to the task. The Trek Fuel EX, Transition Smuggler and Evil Following come to mind. Considering that Ibis dubbed this Ripley the “Long Slack” version we think its namesake deceptively indicates that it’s up for some pretty rowdy riding. Unfortunately that just wasn’t the case. We can’t blame the spec, nor the suspension the high quality frame construction or the overall value. It mainly comes down to geometry; Ibis should go back to the drawing board and it’s not just a matter of being too small or only offering 3 sizes in this model. A small fraction of riders may prefer a super long rear end and a freakishly short/low front end, but we can confidently say that the brands that are currently and broadly getting rave reviews offer geometries that are the complete opposite…Long up front and short out back.