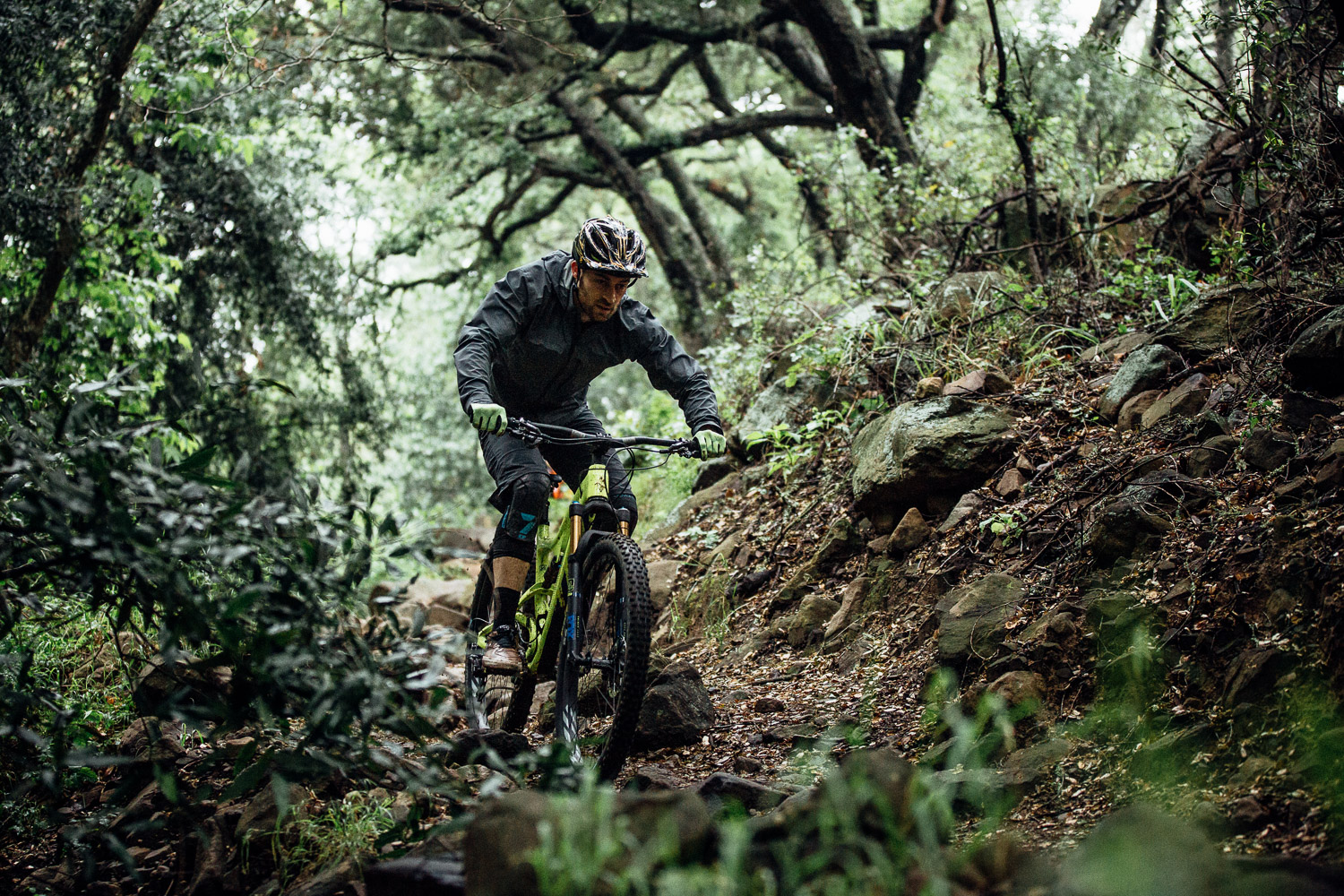 We’re currently in Santa Barbara California wrapping up a bit of an unconventional tire launch with the kind folks from Schwalbe. While most of us assumed we were here for a new tread pattern or tire size, we were all a bit surprised when we learned that the German tire manufacturer was solely launching a new line of compounds. MORE compounds? No, less compounds overall, actually. With the new Addix line, Schwalbe was able to reduce the number of MTB tire SKU’s (read: individual units) by one third. 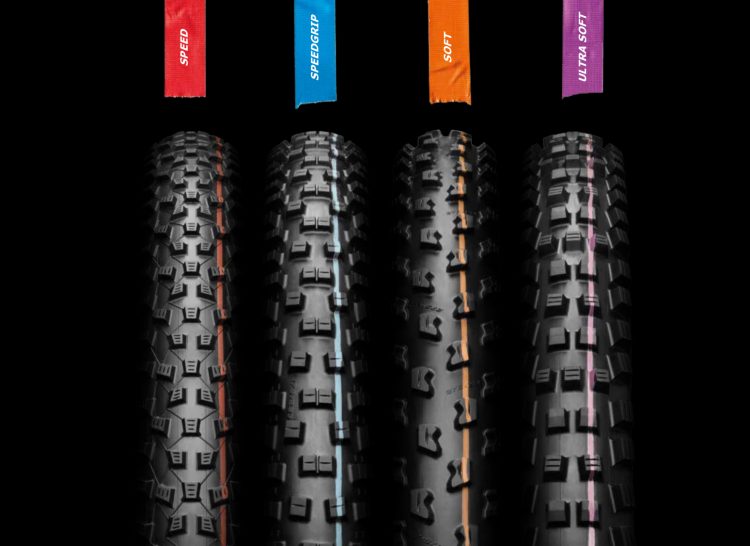 The four new compounds: Speed, Speedgrip, Soft and Ultra Soft as indicated by their colors. And don’t worry, those stripes vanish after a ride or two.

At the heart of it all is a major investment in a new compound mixing machine that was upwards around $1.5 million. According to Schwalbe, this machine provides them with much better control of mixing speed and temperature (which affects cooling). Sitting at a massive 3 stories tall, it features a very unique cooling system. Why is cooling so relevant? In short, heat from mixing compounds can actually cause quite a bit of damage and unintended consequence to the final product. 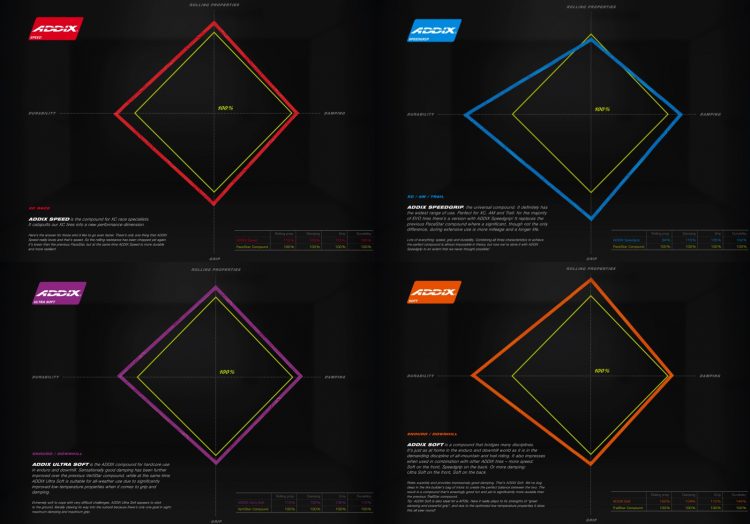 The four new compounds compared to the old compounds. With a minor exception in the Speedgrip compound’s rolling resistance, they’ve all improved in durability, rolling properties, damping and grip compared to their predecessors.

A major factor for this overhaul was durability. In the past, with some tread/compound combinations, Schwalbe received some less than stellar feedback regarding how quickly their tires wore out and wanted to improve that sector.  Looking at the diagrams above, you can see that durability is far and away the most improved metric. One quick note that’s worth pointing out is that Schwalbe has not changed their casings. 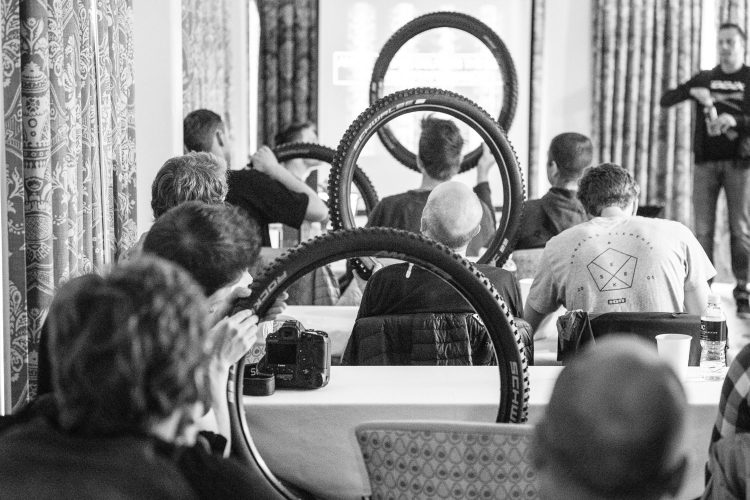 Increasing longevity without sacrificing traction is a tough balancing act so we were a bit skeptical until the tires started to get passed around. At that point we quickly realized, just by feel, that the updated tires are all softer than the tires they’re replacing. In the near future, we’ll be jumping aboard some new rubber for a long term test to see how Addix line’s durability stands the test of time. For now, here are our thoughts after a big, post-rain day in the coastal mountains of Santa Barbara.

Ibis was nice enough to provide their new, updated Ripley LS (which we’ll be writing about shortly) for us to ride. The new model clears 29″ X 2.6″ tires with a bit of room to spare for mud clearance, which we would soon find out. Given that, Schwalbe outfitted our bikes with Nobby Nic’s in the aforementioned size in the Speedgrip compound. 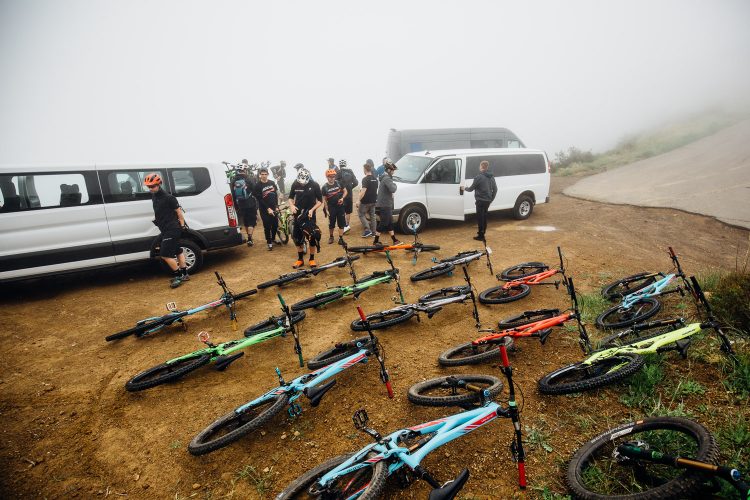 A slew of Ibis Mojos and Ripleys up in the clouds and ready to rip. Photo: Anthony Smith

On first impression, the new compound was surprisingly soft considering that it’s just one step away from their firmest XC race rubber. The tire uses their Apex casing which is designated for “not quite plus” and “plus” sized tires. It’s quite thick around the bead, but tapers down and becomes fairly thin at the middle of the sidewall to save weight and increase compliance. Anyhow, let’s see how it fared out on the freshly soaked trails. 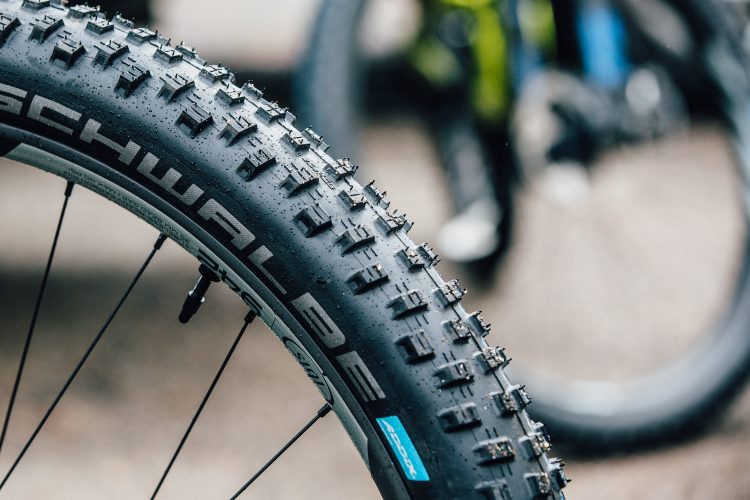 We started out with a shuttle to the top of Romero, a Santa Barbara classic. After the wettest winter on record the trail was overgrown and a bit challenging up top. It starts out with narrow, kitty litter singletrack that sidecuts across exposed, bench cut trails which knife into tight switchbacks. Waist to shoulder high grass in the majority of trail added an element of surprise to say the least. 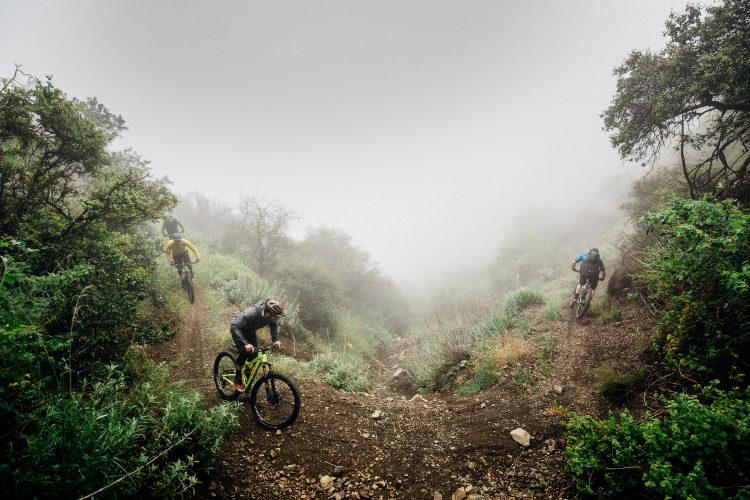 After a few minutes, the trail drives into the woods and completely changes its attitude. Riding on rocky singletrack perched above a creek, generally paralleling it and occasionally crossing it, it’s littered with rocks and an abundance of line choices. We have to admit, we generally don’t find ourselves aboard tires quite this wide, especially on 29″ bikes. Starting out playing it safe, we quickly realized that 22/24PSI fr/rr. respectively was a bit high. Being well familiar with how rocky Santa Barbara is, we figured: “Hey, it’s better to be conservative as you can always air down, right”? We incrementally kept airing down until we found ourselves at around an 18/20PSI sweet spot. 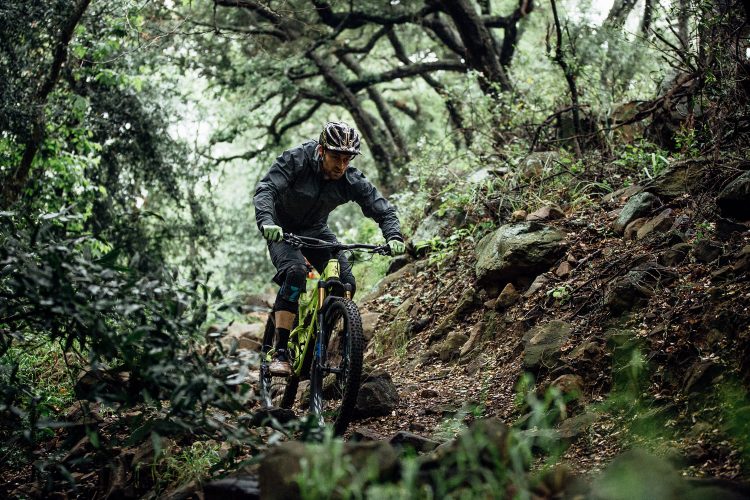 At the bottom of Romero we reconvened and split up. A few of us grabbed a shuttle back to the top and some of us, including the author embarked on the wet, moody hour plus climb back up for a run down Cold Springs; a much rougher but equally iconic Santa Barbara trail. The climb up mainly consisted of damp (but not greasy) fire road. We found the rolling resistance to be surprisingly good for a tire of this size with knobs this soft. By the way, the Nobby Nic will only be available in the Speedgrip compound from here on out. Remember that note about reducing the number of tread/compound/casing options by 1/3rd? That’s a perfect example. Anyhow…on to Cold Springs. 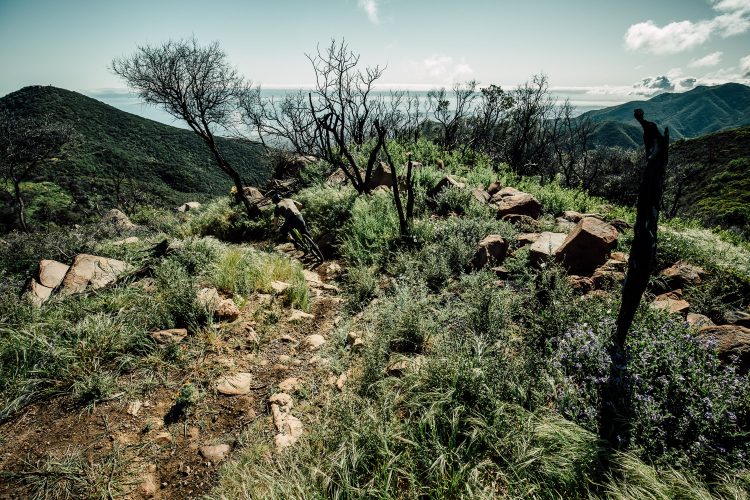 At the top of Cold Springs, the remaining clouds from a morning soak had burned off to provide an ocean vista and a much better look at our 3000 foot descent all the way into town. Cold Springs starts out similarly to Romero with bands of singletrack, but with a bit more sniper rocks at the sides of the tall grass. One of them caught us off guard, and after tagging a foot on them, over the bars we went, but we weren’t the only ones. We brushed it off and continued on to where the grass vanishes and the trail gets much more violent and rocky. 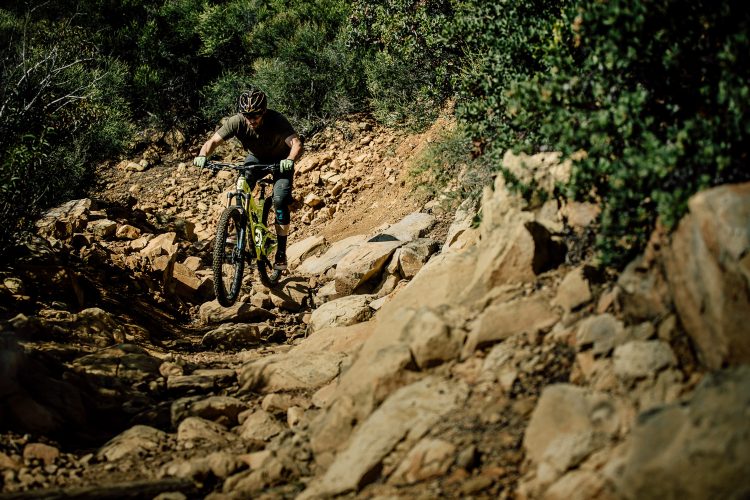 Considering we were on a short travel 29″ bike and the last time we’d ridden Cold Springs we were on a 26″ 200mm travel DH bike, we were surprised at how well we could roll through the notched out chunder. The volume of the tires helped and the new compound seemed to manage quite well. Ideally on a trail this rough, we’d probably opt for a narrower, heavier duty Super Gravity casing on a Magic Mary with the new “Soft” compound, but overall, the Nobby Nic held it’s own surprisingly well. 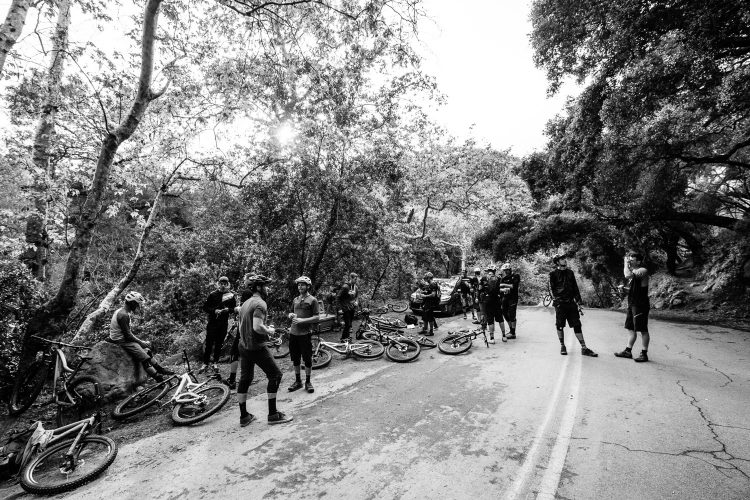 After a solid day we all linked back up at the back up at the bottom for a beer or two and chats about the incredible trail conditions and new rubber. A few small crashes and a couple of flats were to be expected as Santa Barbara is can be a harsh place to ride which commands respect, but we most certainly received the full experience.

All in all, we did have a full day on a broad variety of trail conditions and our initial impressions are good. We’re excited to get some time in on a few of the new compounds once the Sea Otter madness blows over. The takeaway point is that Schwalbe has made a concerted effort and a big investment in the MTB sector and it shows. We love the idea of a more simplified, streamlined array of tires and think that consumers will find themselves faced with much easier, more logical choices along with improved durability and grip. Although you can find out for yourself as the new tires are just now becoming available, stay tuned for our long term reviews in the coming months. See you at Sea Otter!