At the beginning of last December I was in the Portuguese region of Algarve, a location that thanks to the WeRide.pt guys is becoming increasingly popular for the practice of mountain biking, especially in winter, since the good weather It allows you to ride without worrying about whether it is cold or bad weather. The reason why I traveled to the south of Portugal was the presentation of the new and updated Jeffsy, the Aggressive Trail bike from YT Industries. 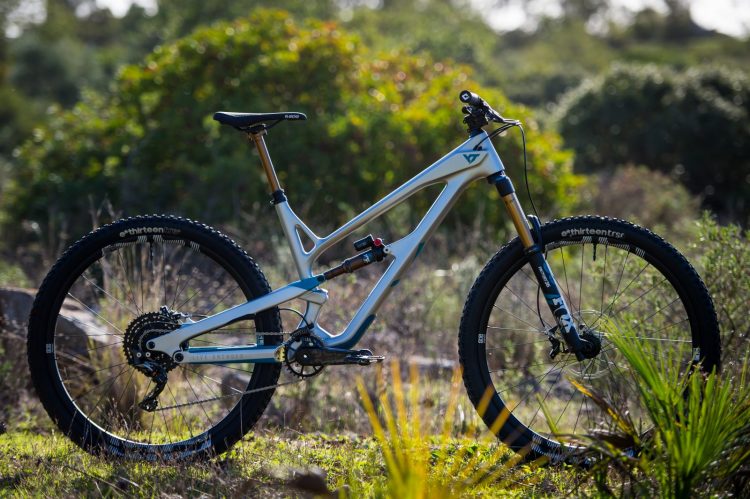 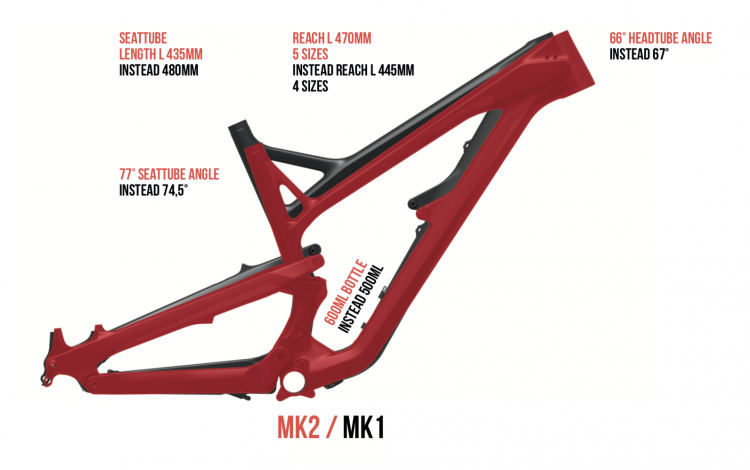 The changes in the geometry of the new Jeffsy 27 compared to the old one, both in size L, are the same as in the 29 “version, although with different figures. The seat tube is now shorter, measuring 435mm instead of 480mm, the angle is 76 ° instead of 75 °, a little bit more straight than the previous one, and the steering angle is now 65.5 ° instead of 66 °. The reach has increased, going from 455mm to 460mm. 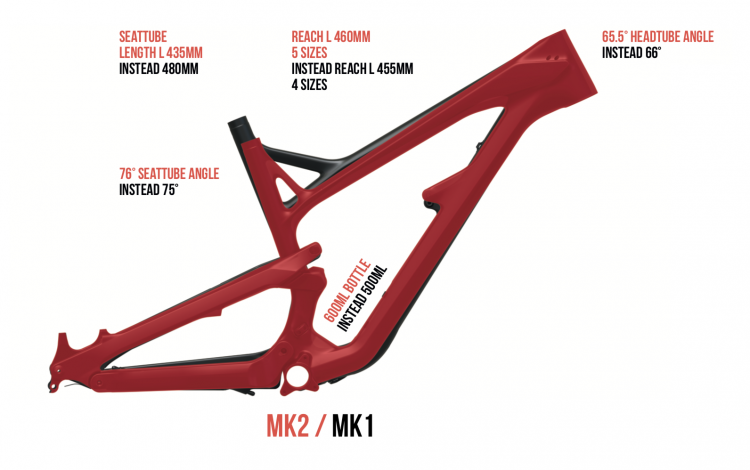 In the new version, it can hold a bottle of up to 600ml, and as a new development, YT has increased the range of sizes available for the new Jeffsy, from offering only 4 (SML-XL), to offer 5 (SML-XL) -XXL).

The assembly and choice of components is the same for both the 29 “and 27.5” versions, which vary depending on whether it is a more expensive or cheaper model, but other than that, the only difference is the size wheel. YT wanted all the invited journalists to try the new Jeffsy in 29 “, since in this wheel format, it is where the differences are more noticeable with respect to the geometry of the old model.

Specifically, the model we tested was the CF Pro Race, the highest in the range, which is assembled with a set of handlebar and Renthal power, the Fatbar Carbon 35 800mm wide and 30mm high, and the Apex 35 50mm long and 35mm in diameter, respectively. The cuffs are ODI Elite Motion with lock-on anchor, and the brakes are a SRAM Guide RSC with Centerline discs with a diameter of 200mm for the front, and 180mm for the rear. 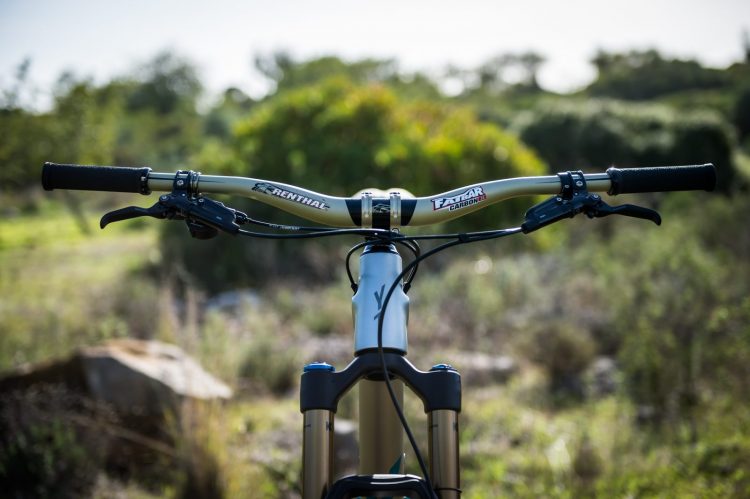 The CF Pro Race models, both in the 29 “and 27.5” versions, are the only models that come standard with forks with 10mm more travel than the rest. In the 29 “, we find a FOX 36 Factory of 150mm with Kashima coating and Grip 2 cartridge, while the 27.5” reaches up to 160mm of travel. They are models that have been mounted in such a way that one could compete directly with them, without hardly changing anything, that is why YT uses forks with those 10mm more for those who want to compete or ride more aggressively. All other 29 “models use 140mm travel forks, and 27.5” 150mm forks. 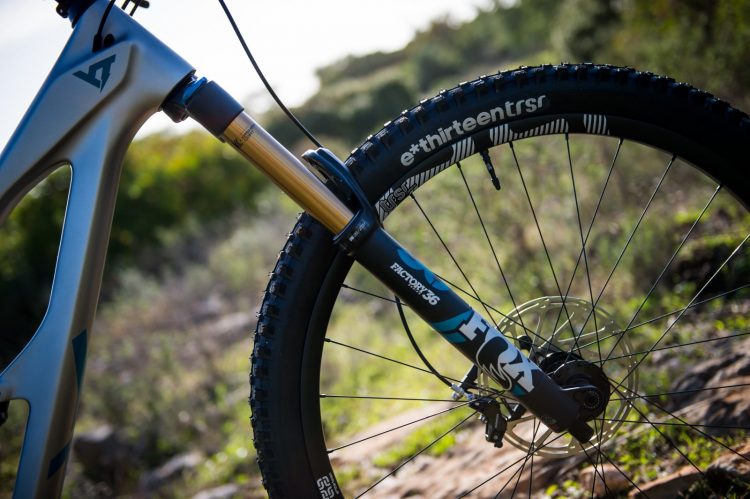 However, the rear travel does not vary, being the same in all models: 140mm in the versions of 29 “, and 150mm in the 27.5”. The shock absorber of the CF Pro Race 29 is a FOX DPX2 Factory with 3 adjustment positions, EVOL air chamber and Kashima coating. Its measure is metric, measuring 210x55mm. 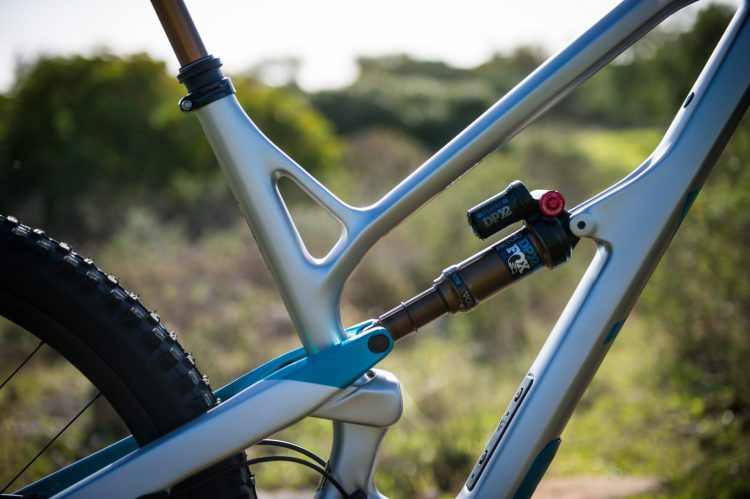 The position of the shock absorber in the frame leaves just enough space for a bottle of up to 600ml to be used. That is why YT has collaborated with Fidlock , a brand dedicated to the creation of bottles with anchors and magnetic supports, to design a new bottle specifically for the new Jeffsy.

Although its appearance is minimalist and not at all ugly, its functionality did not convince me much. If one is pedaling seated and wants to reach the bottle to drink, first it costs a little to reach due to its low positioning in the lower tube, and second that the magnetic retention system makes it a bit bulky to release. If, on the other hand, one wants to drink while standing and not sitting in the saddle, releasing the bottle is somewhat easier, as long as one has become accustomed to the magnetic release system. 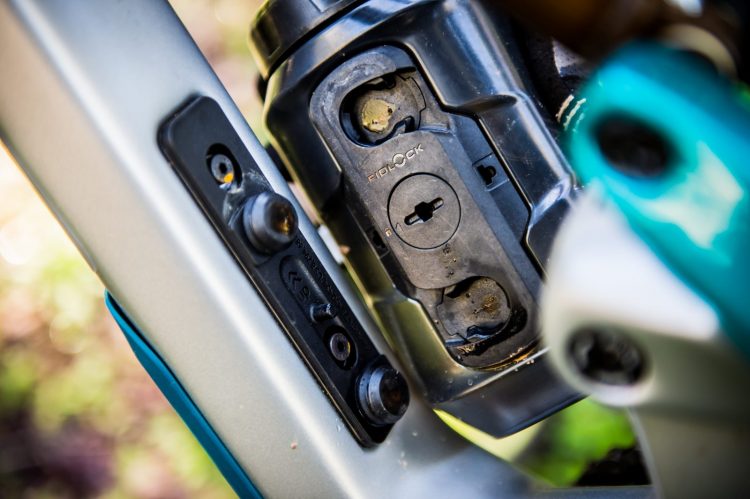 As for the functionality of the magnetic retention, I can assure that it is good, since during the test I did not lose the bottle at any time. Anyway, I still think that the Cageless Fabric minimalist bottles , although unfortunately sometimes unreliable, are the most beautiful and simple to use. 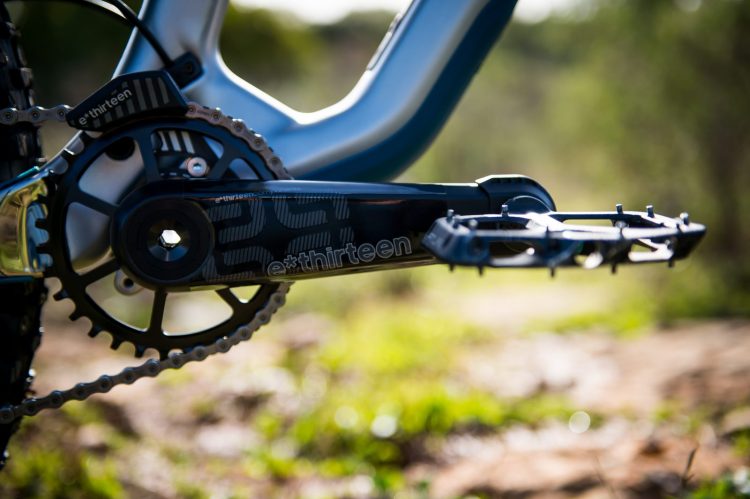 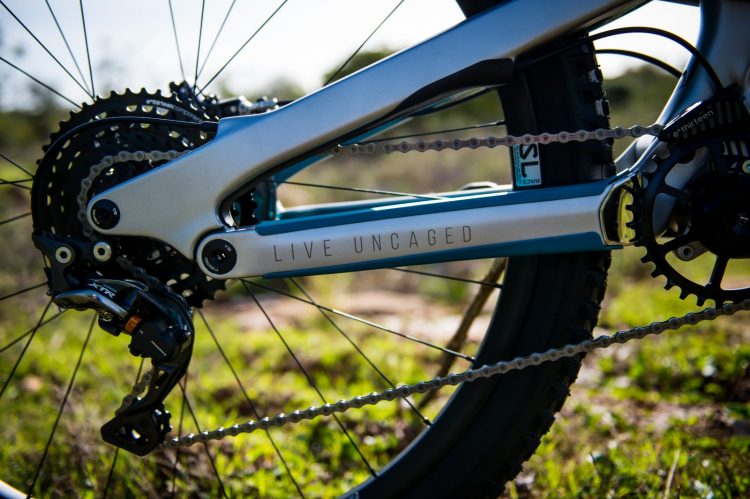 The wheels are completely thirteen, mounting carbon TRS Race wheels with an internal channel of 28mm and Boost bushings, and TRS Race and Plus tires of 2.35 “wide prepared for Tubeless. The other carbon Jeffsy models use the same tires, but with aluminum rims thirteen, while the aluminum Jeffsy rides Maxxis tires and DT Swiss rims. 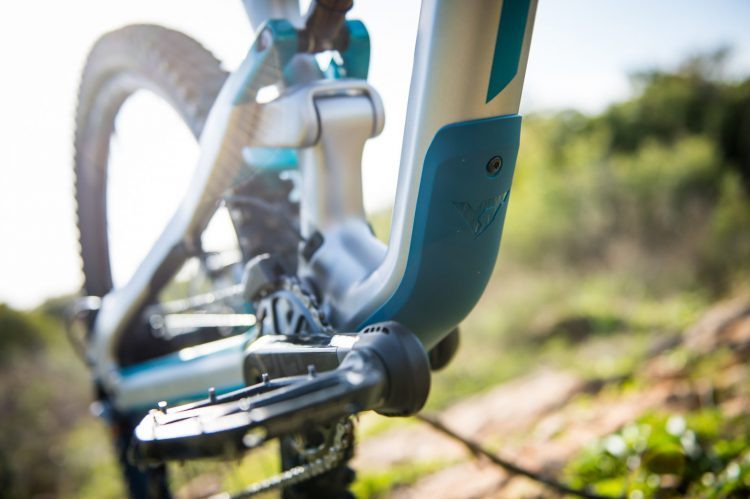 YT has paid a lot of attention to the details of the hard plastic and rubber protectors of the new Jeffsy frame. The lower tube guard is now anchored and held by screws, and those of the rear pods have been improved and now cover more possible areas where the chain can hit. The wiring and the rubber inserts that enter the external holes of the frame have also been revised and improved. 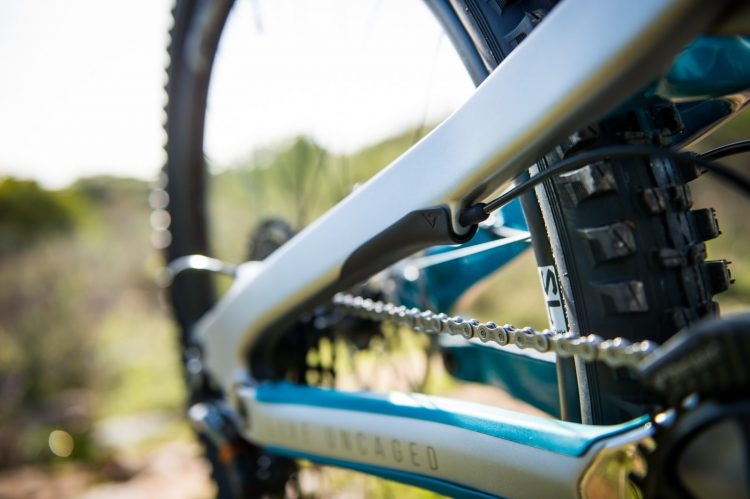 The trails in the Algarve region are quite varied, so I had the opportunity to try and see how the new Jeffsy 29 behaves in different types of terrains, from rocky and loose, to compacted and fast with jumps, passing through more technical ones and steep. 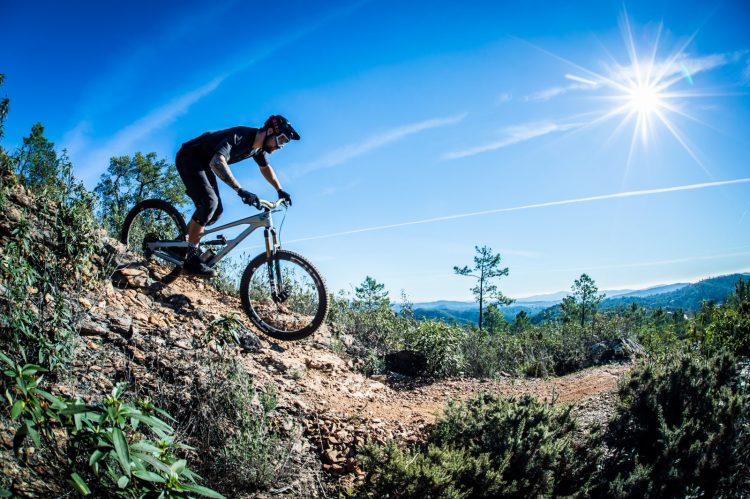 From the first moment I got on the new Jeffsy 29, I noticed it great. I measure around 1.80m, and the size I tried was an L, being generally the correct one for my height, but for some reason I did not finish feeling 100% comfortable during the test, especially in the descents. Maybe it’s because I’m more used to riding with bicycles with 27.5 “wheels, but anyway, I think one size less would surely have gone better, and a shorter handlebar too, since 800mm is too much for my taste. With this I do not mean that those people with a height similar to mine are going to feel uncomfortable with a size L, since the choice of the correct size depends on the driving style of each and their preferences, as reported by YT during the presentation. 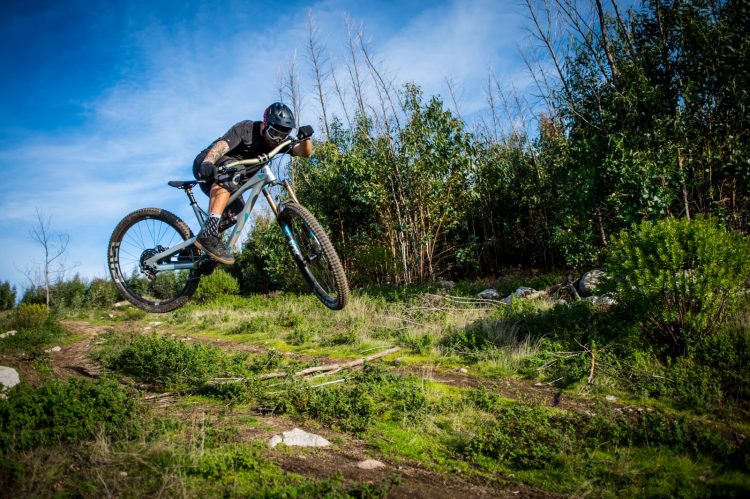 Despite my small “problem” with the size, the new Jeffsy worked very well, as is to be expected on a modern Aggressive Trail bike with these characteristics. Although we did not make many technical or pronounced ascents, during the second day I could check the pedaling performance of the new Jeffs and uphill, connecting several trails by tracks and singletracks. The position of pedaling on the saddle is good, and the truth is that it is quite agile and intuitive when obstacles have to be overcome, obtaining a positive result, being able to reach the beginning of each descent without noticing any problem. 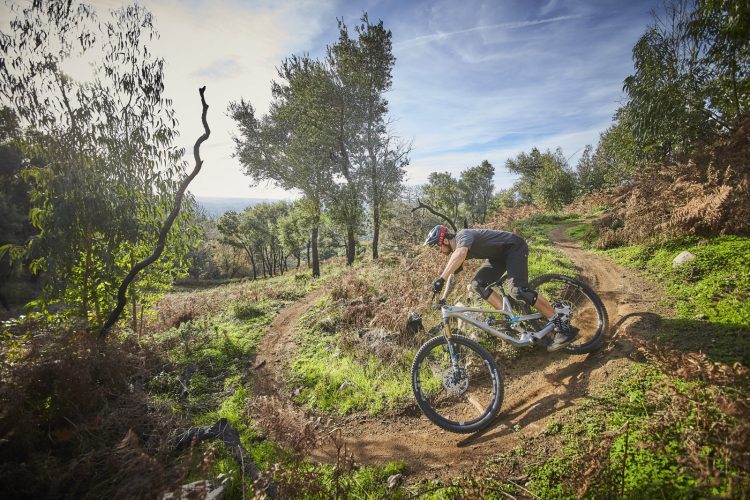 As for their behavior downhill, I noticed that in some consecutive sharp turns it was a bit difficult to move, something typical of big-wheel bicycles, but it gave me enough confidence to descend by any kind of trail, technical and fast, and saved several times that I lost the plot. The suspensions, with a little more air than normal due to my driving and preferences, worked very well at all times, offering a sensitive but progressive behavior to the big impacts.

The new Jeffsy is more aggressive and robust than the previous one. With the improvements that the frame has received and the geometry updates, it is a bicycle that allows you to do everything, from exits on your local trails with friends, Enduro races or even down a bikepark, the limits you put your. 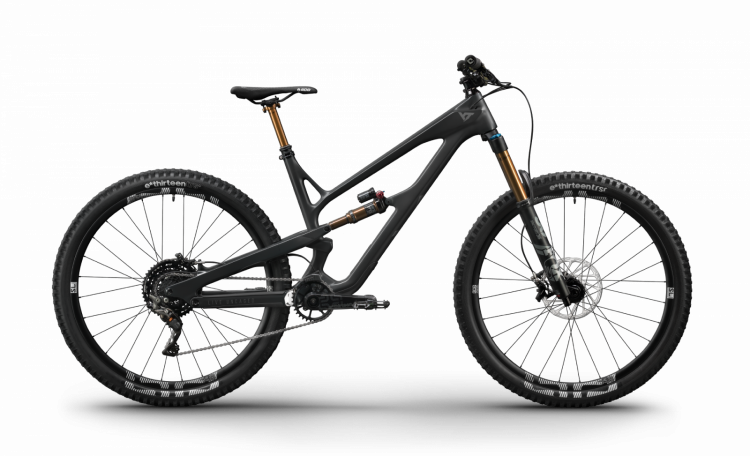 To learn more about the new YT Jeffsy, visit www.yt-industries.com

[Video] Itinerology : The Thread Of Time