SRAM made waves when they first dropped their 1X12 speed drivetrains: XX1 and XO1 Eagle. It was basically a nail in the coffin for 2X drivetrains with its massive range and incredible performance. Given the company’s consistent pattern of introducing new product starting with the flagship line then trickling the technology down, it would be foolish to think that they haven’t been fervently putting in work to bring their insane 1X12 range to the masses as soon as they possibly could. Enter GX Eagle… 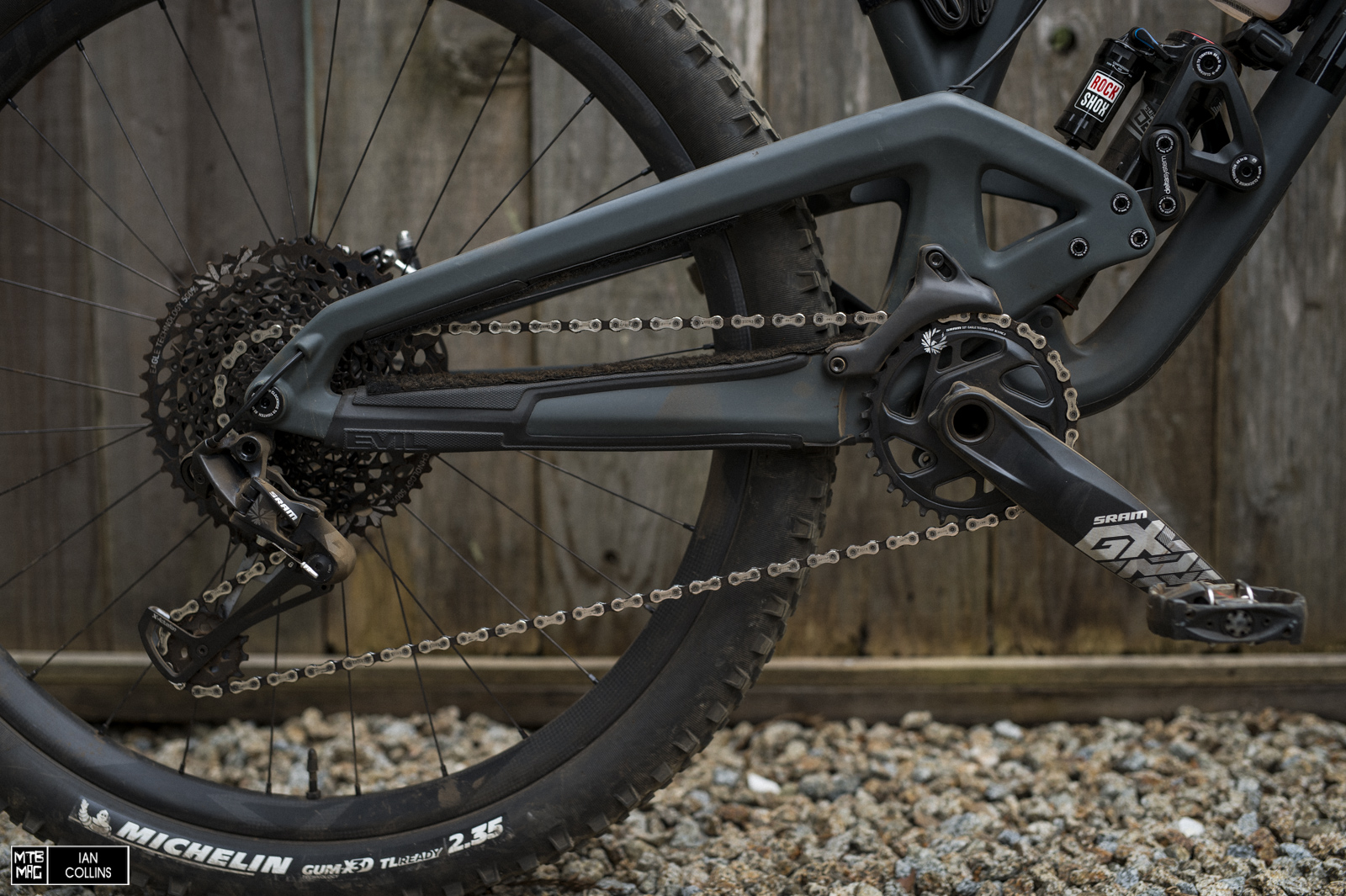 In terms of design, GX Eagle doesn’t stray far from its more expensive counterparts, XX1 and XO1 Eagle. Offering 500% range, you have all of the same gearing available. The main differences between the groups are the materials and production methods used. For example, the cassette is not made from a one piece forging, but instead from a set of pinned together cogs. Additionally, the cranks are forged aluminum as opposed to carbon fiber. By the way, the aforementioned parts are where SRAM likely saves the most money on production costs and that gets passed on to the consumer, albeit at a modest weight penalty. 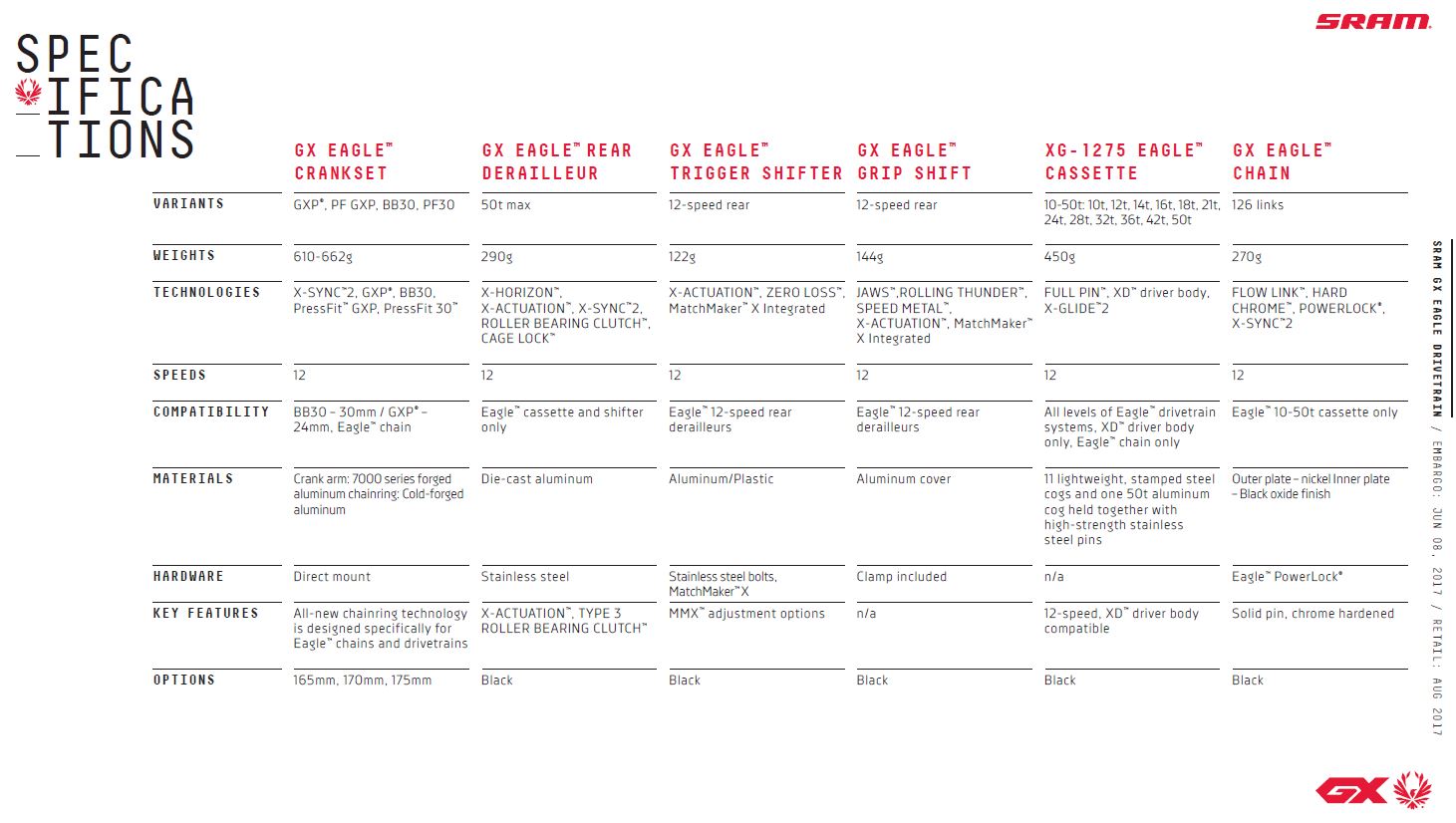 Interestingly enough, all of our weights came in under the claimed weights from SRAM as you can see when you compare the specs above with the tiled photo below. Note that our chain is cut to length as we took this opportunity to directly compare weights with the XX1 Eagle group that we pulled off of our bike.

All in all there is a 271 gram difference between the flagship XX1 Eagle and the very reasonably priced GX Eagle. That’s a .6 lb difference for folks using imperial. What doesn’t change however is the tooth profile both up front and out back.

Anyhow, enough tech babble, let’s see how it varied from XX1 (if at all) on the trail…

SRAM was kind enough to get this group in our hands a few weeks in advance so we could make our first impressions before the official launch. After geeking out and weighing everything, the installation and setup was a snap. This was mainly because we already had XX1 Eagle installed on our bike. 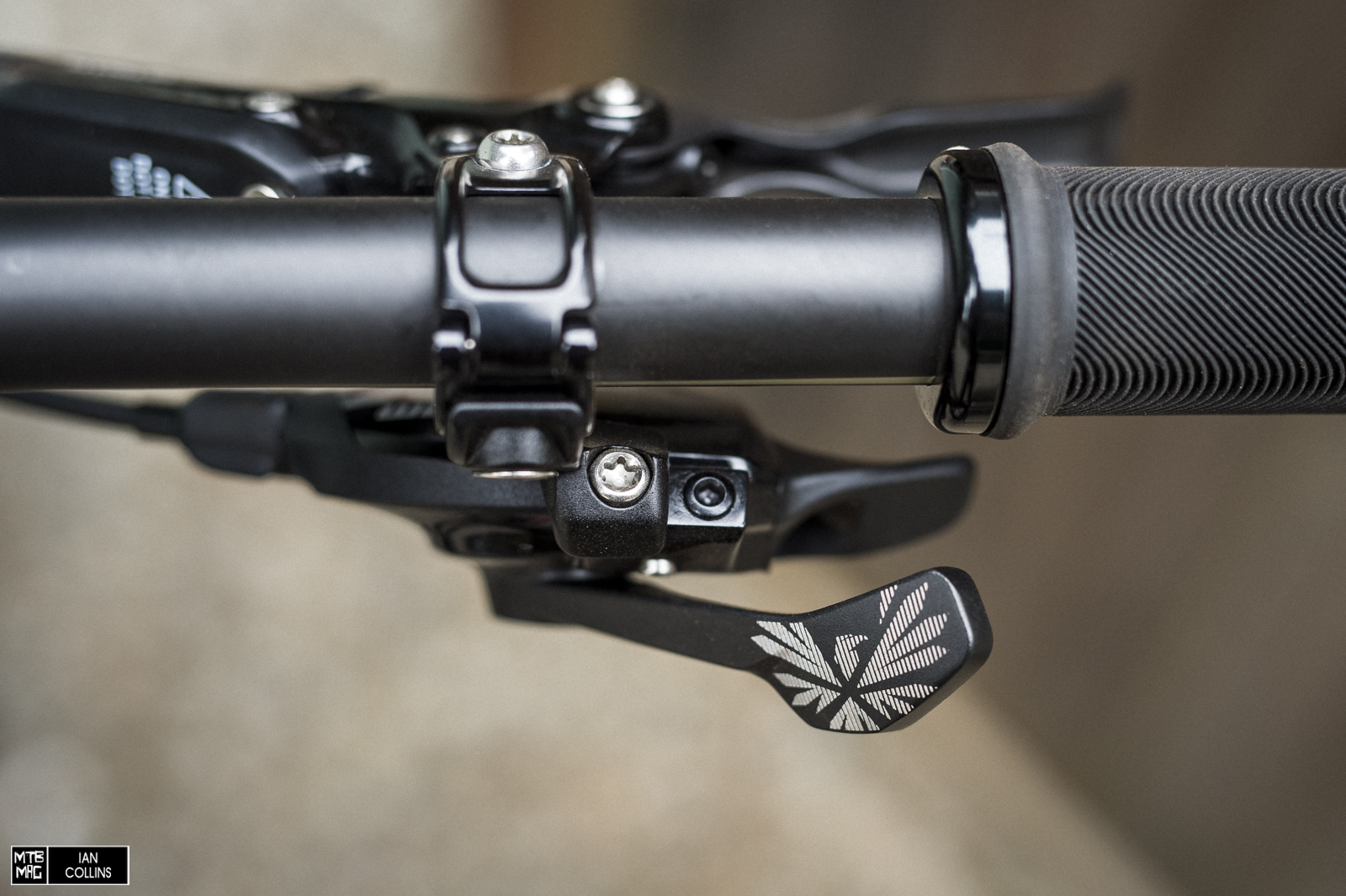 One small, nit pick out of the gate is the non-adjustable paddle shifter. The GX Eagle shifter still has the two position option for inboard/outboard placement. With both the “matchmaker” clamp and the standard clamp, you have a plenty of rotational adjustment of the shifter as a whole, but to save costs it forgoes the ability to independently adjust the angle of the lever itself. In the grand scheme of things, this isn’t a huge deal though. After all, it helps bring the price point down. 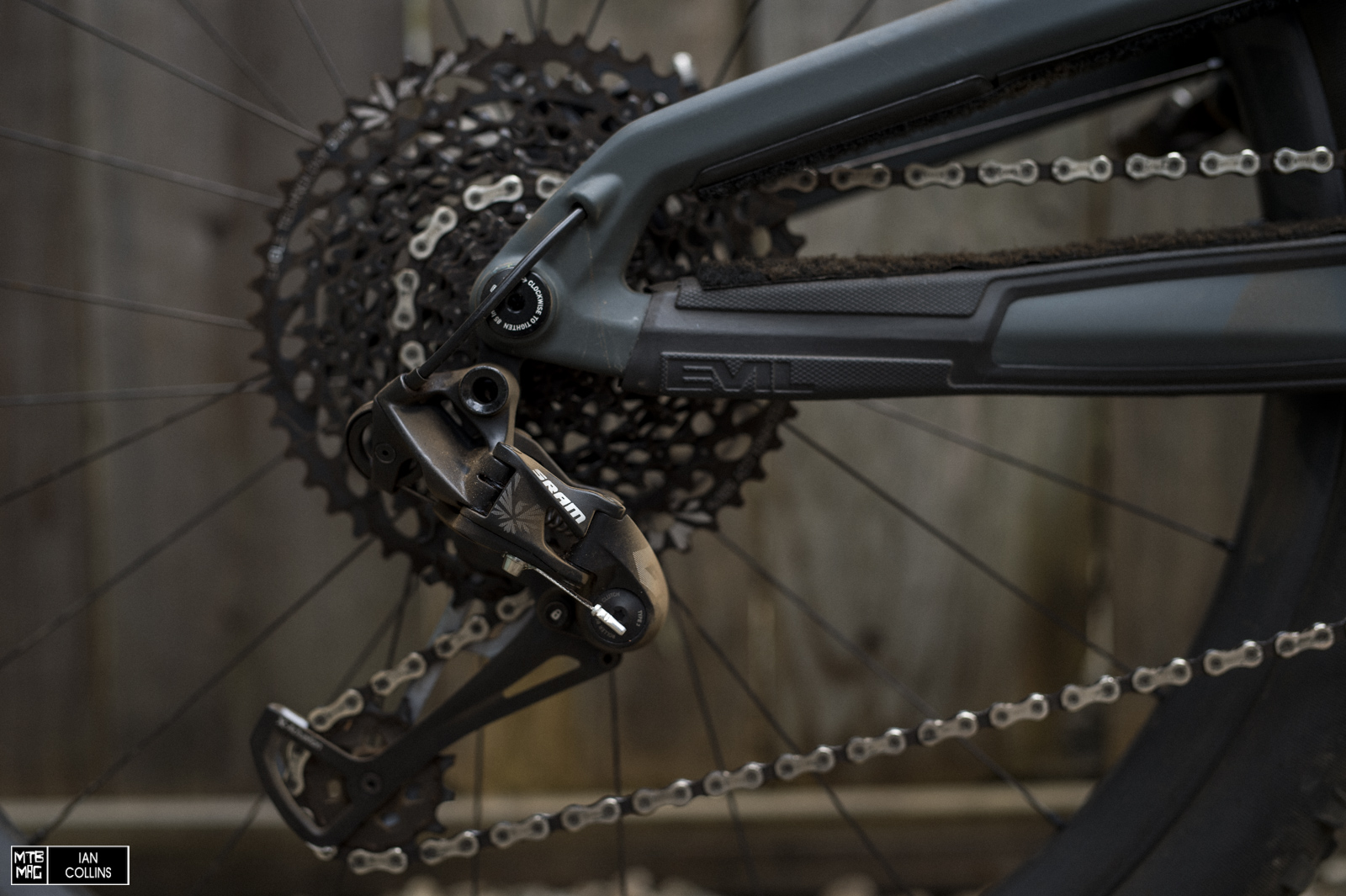 Once we got to riding, we were actually shocked at the performance of this group to be quite honest. Eagle is slightly finicky in setup, but providing that everything is just right, it is the best shifting group we’ve ever used. GX Eagle so far has been no different. Mega fast, crisp shifts are delivered with absolutely no lag whatsoever. We’ve mentioned in the past that with huge range and this many gears crammed into a 1X drivetrain, it’s imperative that your derailleur hanger is flawlessly straight, and that you mind your B-Gap adjustment amongst the obvious like limit screws and chain length…Nothing to fret over, but if you’re an 11 speed convert it’s worth noting. 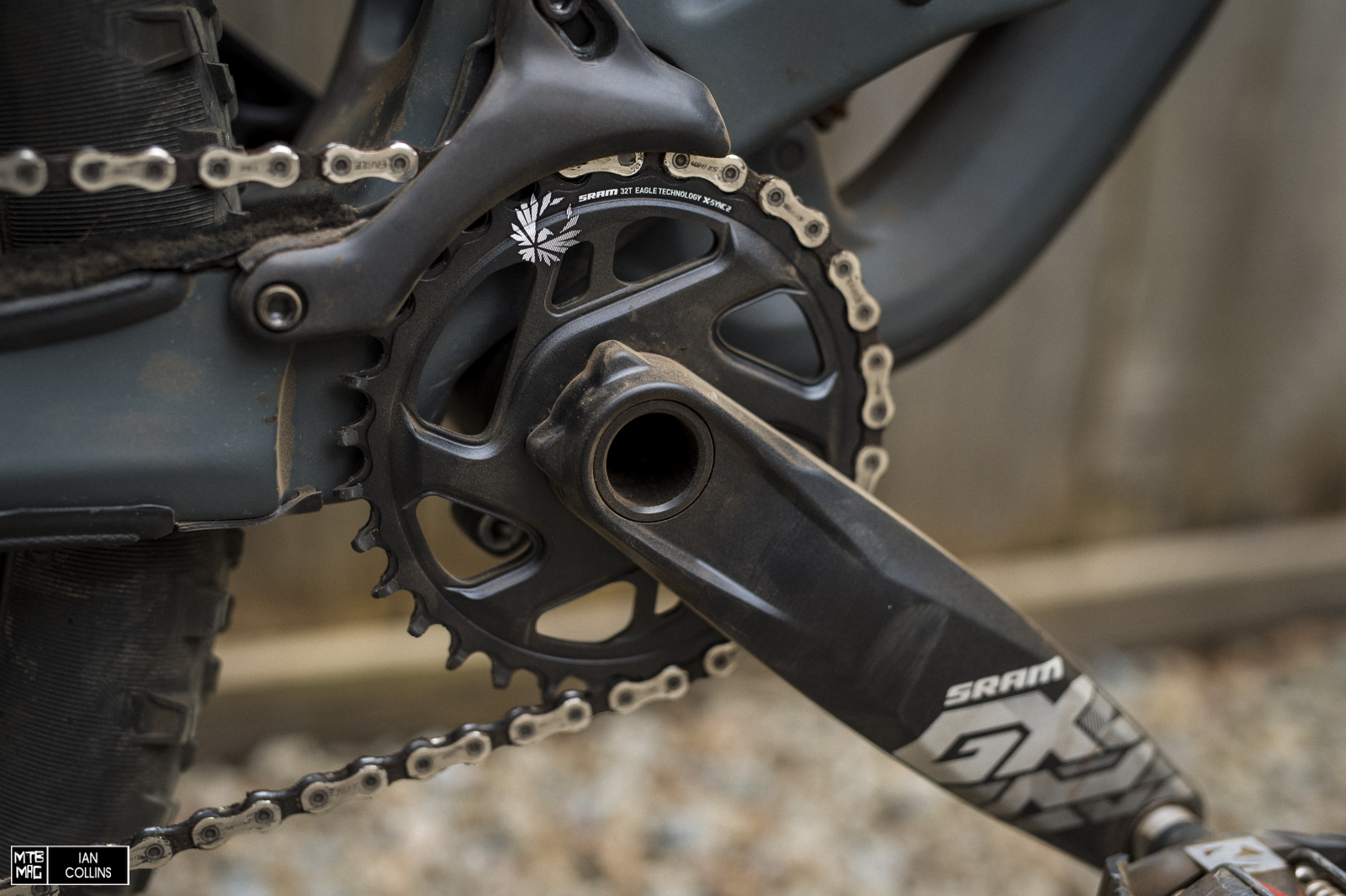 As mentioned prior, we’ve only had a few weeks on this group so we can’t carry on too much about it, but aside from the performance of the shifting itself, the chain retention up front was excellent. SRAM’s patented X-Sync pattern carried over to this new stamped ring and as it keeps the same tooth profile, it inherently maintains the same ride characteristics. It’s worth noting that to test this, we mainly rode this bike pictured above without its built in upper guide block. Lastly, the cranks were plenty stiff as we noticed no discernible differences in their flex vs. the carbon fiber XX1 Eagle cranks that came off of the bike.

As mentioned prior, our time on this group is fairly limited, so the jury is out on long term durability, but we can’t help but have deja vu from our experience aboard the 11 speed GX drivetrain. This group has virtually the same level of range and performance as XX1/XO1, but at a much lower cost and a minor weight penalty, but that’s to be expected when compared to the flagship groups. That said, it’s still got to come in lighter than even a top end 2X group. Hats off to SRAM on another big breakthrough in the drivetrain world. Stay tuned for a long term review in a few months.