Pedal assist mountain bikes have come a long way in the last few years, however the drive trains that have been used are generally adapted from the normal pedal bikes, which means that in some instances, due to the increased power that an E-bike produces, performance is not optimized.  SRAM recognised this and have been developing the EX1 drive train specifically for E-bikes.

During their presentation event in Finale Ligure, we were also able to test ride the new parts which will be hitting the market in September.

The EX1 group-set has a range of new features that we take a look at below. 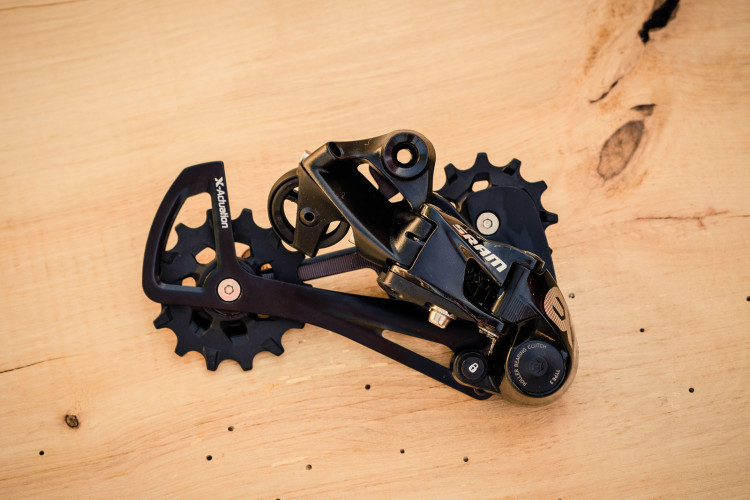 SRAM has engineered a new shifter that only allows shifting in single steps reflecting the thirty percent ratio differences now between gear cogs. 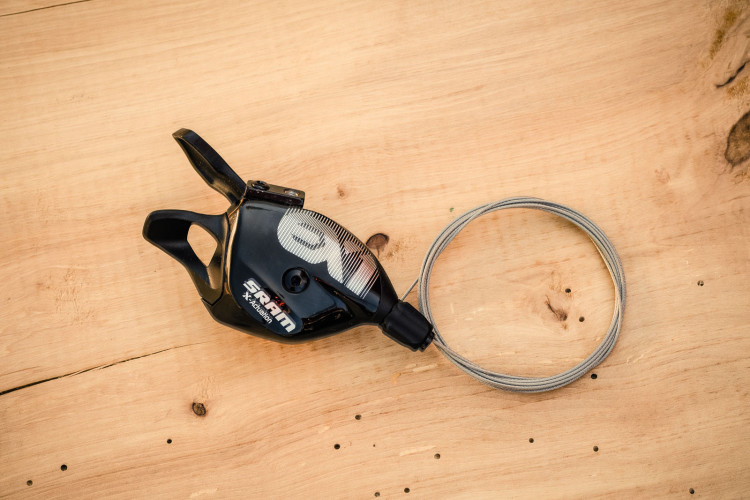 The largest improvement is the new 8 speed cassette: SRAM has engineered a cassette that allows smooth shifting under high loads. 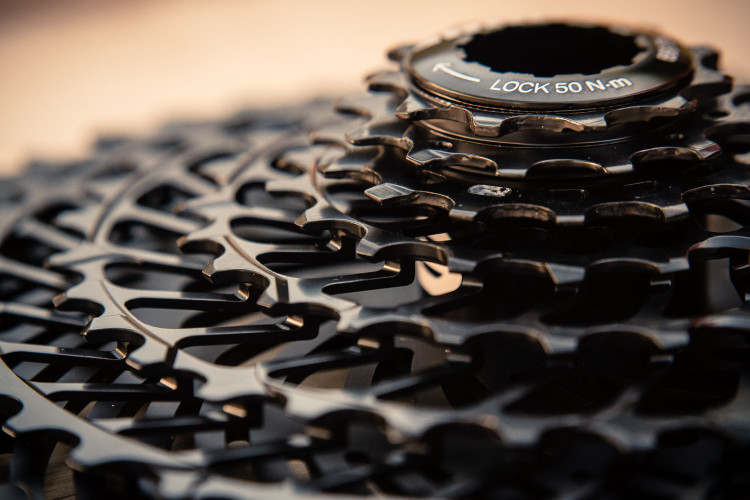 SRAM has also engineered a new crankset and range of chain rings for the various motors on the market. 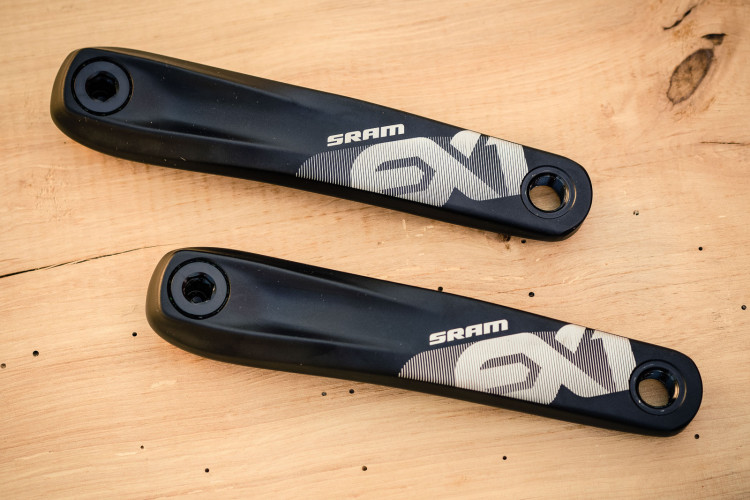 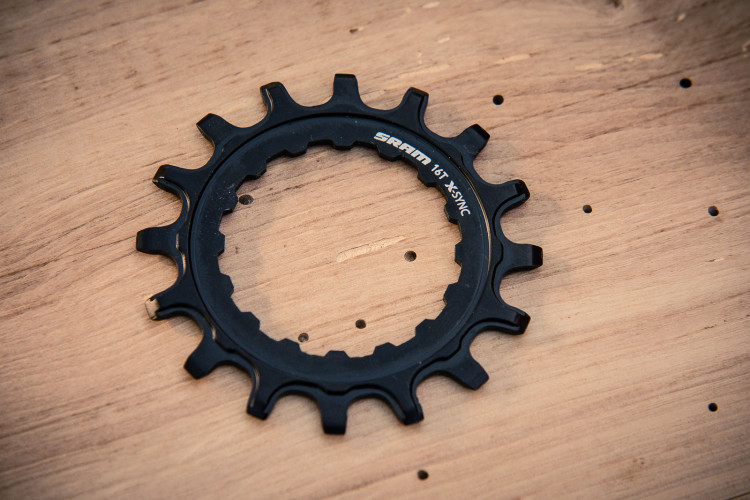 SRAM’s new eight speed chain deals with all the forces that an E-bike drive train can exert while it transmits power. 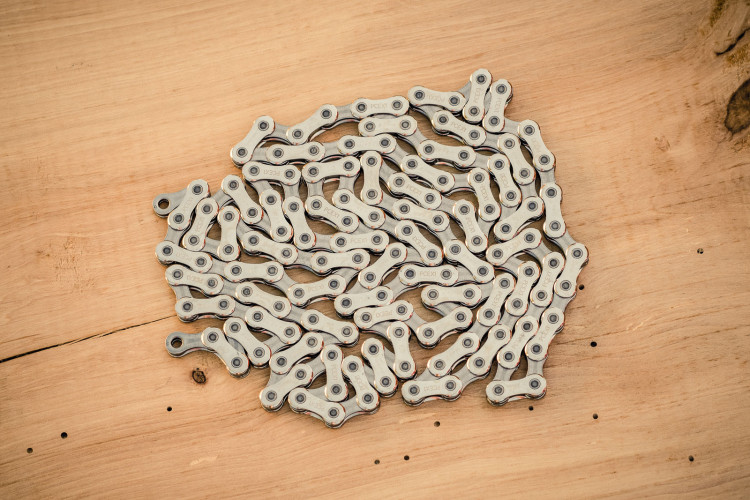 The only true way to see how new components work is to actually try them. In this case, SRAM had arranged a test fleet of bikes with the components mounted to test, including their new Guide RE brakes which are also being announced today. The idea was to ride for a day and get a real world understanding of how shifting has improved. Our base for the test was in Finale Ligure, without shuttle support! 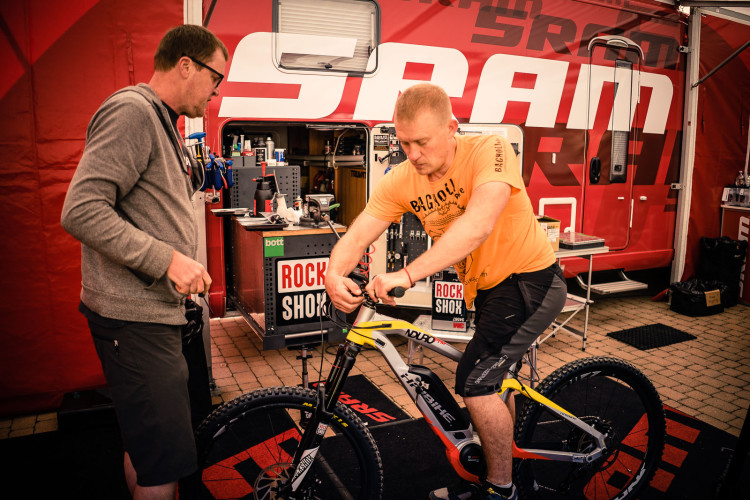 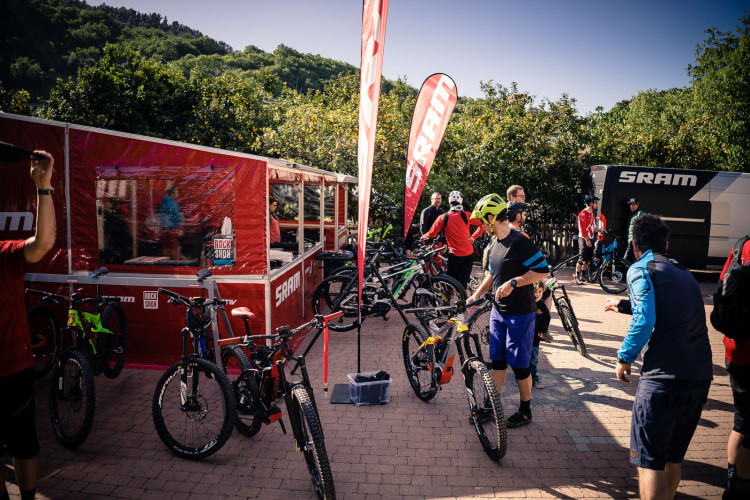 Our first ride out was from close to the beach in Finale, we rode almost 1000 metres uphill on our first accent. We tracked our route so it is possible to see where we went and how much is possible with an E-bike.

Riding with the new EX1 was a refined experience especially on the climbs.  First, the availability of an 11-48T ratio meant that we could climb anything easily (that was rideable). This is where the usability of the EX1 cassette becomes clear. The thirty percent difference between gears meant we didn’t have to double shift, which was a tendency with a normal cassette. The use of eight gears was ideal: we did not feel the need for more. When we did shift the movement of the chain was quiet, smooth and fast.

Normally there is a clunk and grind noise with a standard cassette when shifting under E-bike loads. With the EX1 it was controlled and smooth even when pedaling hard. The chain also cross chains less on the EX1 cassette, putting less wear forces onto the chain at the extreme ends of the cassette. The cassette is 7mm inboard compared to a normal cassette. The bigger cogs reduce chain load significantly and wear in combination with less cross-chaining.

The whole rider/motor power to the cassette experience felt much more fluid. If we came to a short uphill section that we were not expecting and we found ourselves in the wrong high gear, a quick shift and the chain quietly moved to the selected easier gear with no fuss. This is a big change compared to our previous experiences.

Descending  and changing gear with the EX1 was smooth and faultless. The lower ratios are similar to a normal cassette maxing out at 11T. The use of a 48T cog behind means that we could use a 34-36T equivalent on the front, that gave us plenty of top end when needed.  The derailleur and shifter worked faultlessly during our time on-board the new system. Interestingly the cage length is slightly longer to account for chain growth on the new EX1 derailleur.

Our time with SRAM also included some face to face time with Nicolas Voulioz discussing E-biking and the new EX1 system. Apart from watching him ride and explain how he felt with the new system, he also managed to touch on how E-bikes are really changing the market and giving riders access to more trails that would have been harder to get to.

One of the new features that is hard to see or feel on the new EX1 cassette is the defined link position. The inner link and outer link are different. Correction teeth skip the chain into the correct position under load on the top parts of the cassette. Engineering experience and math provided the correct tooth layout when SRAM were developing the cassette.  Then some trial and  error and use of high speed cameras allowed them to fine tune the development process.

The new EX1 cassette causes less loads on bearings and axles, reducing plastic wear on the drive components which is greater than abrasive wear in general, and one of the key elements to overcome with greater loads on a system.

With the new single step shifting, the various motor software have been redesigned and updated for EX1. Bosch have worked closely with SRAM on the system to ensure compatibility and sustained performance.

SRAM were keen to emphasise how the EX1 is controlled with shifting. There are many more high load shifts now taking place with E-bikes in places on the trail where you don’t normally shift. The 436 percent gear ratio across eight gears is a boon as there is no need for a front derailleur and  it is now harder to overshoot the shift. There has been a lot of development, plus huge investment in time and testing to ensure that the EX1 is as close to perfect as can be for a first foray into an E-bike drive train. Our time on-board was enough to understand that EX1 will definitely improve the shifting experience on pedal assist bikes. 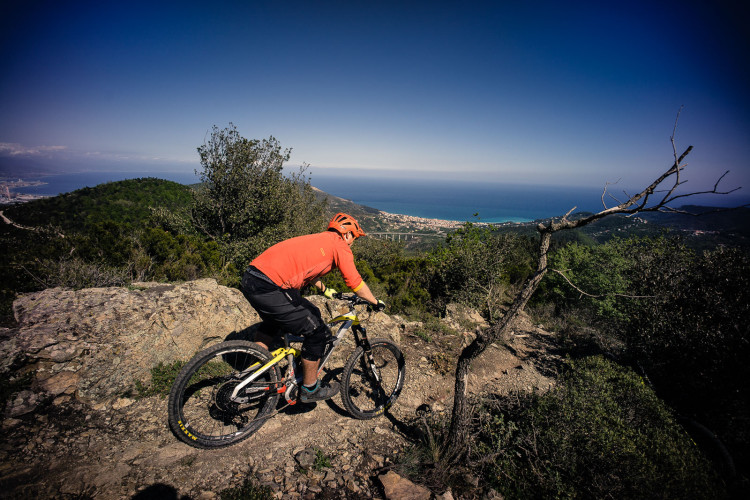