It was already in the air, since we’ve  seen Jerome Clementz on the bike a few times, but now it’s official: Cannondale launches the new Jekyll. After a long period of development and tests, the new Enduro bike from the big C has been revolutionized in every detail, at the same time maintaining the core concepts, which made the previous model famous. The 4 builds of the Jekyll, made of both carbon fiber and aluminum, are already available at Cannondale dealers. Let’s have a closer look. 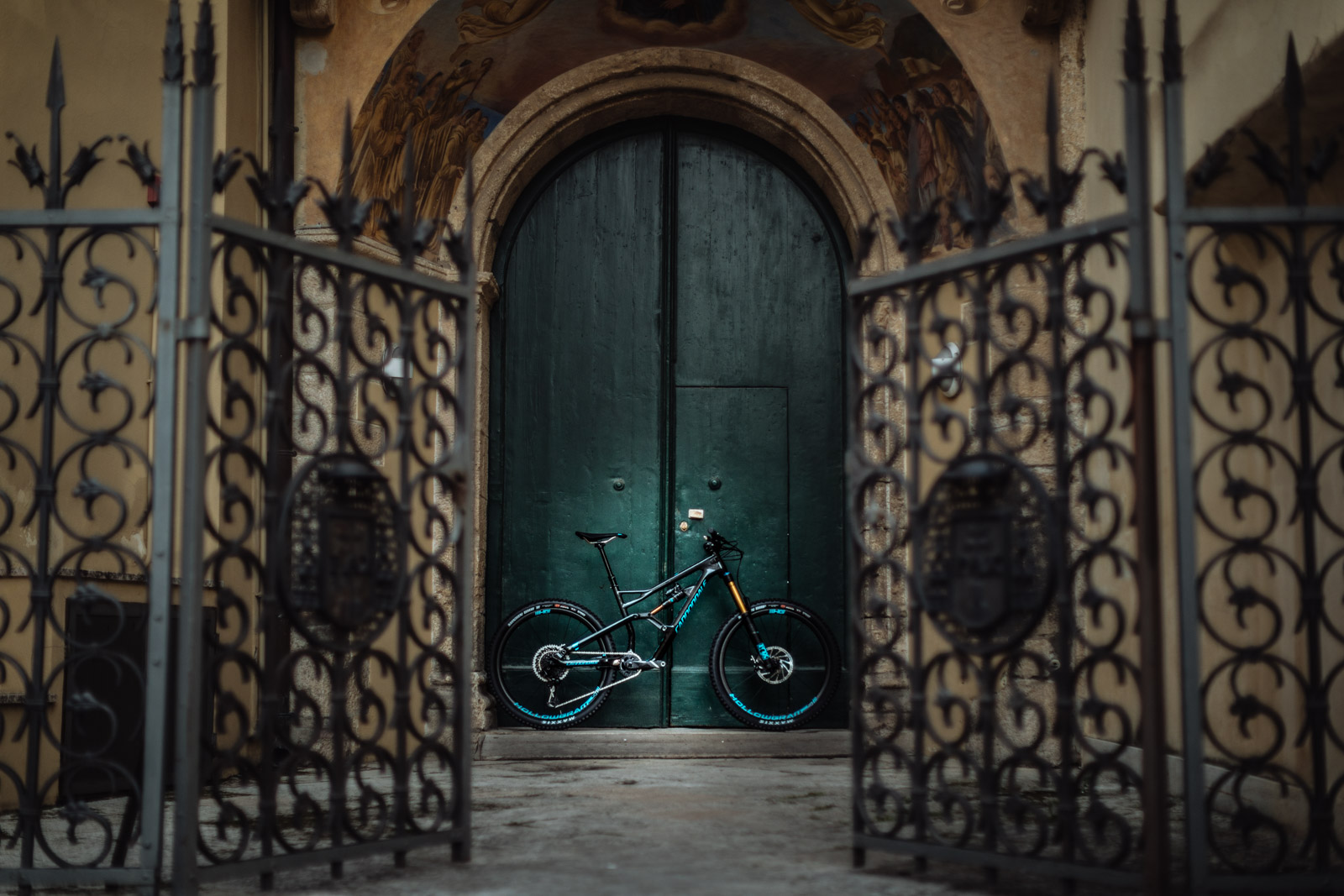 Goodbye DYAD, welcome Gemini. The most important news on the new Jekyll is the suspension system, in particular the shock. As some spyshots had already shown, Cannondale dismissed the DYAD, which enabled riders to adjust travel and geometry on the previous versions of the Jekyll via remote control. The dual concept of the DYAD has been partially used also on the new shock. It is a metric FOX Float X equipped with the new Gemini system, which enables to reduce the travel via remote on the bar. The Float X Gemini weights 77 grams less than the DYAD. The Gemini system allows to set the shock in two modes: Flow and Hustle. The Gemini remote is the classic FOX 2-position lever. In Flow position the shock behaves exactly like the Float X standard model. With the remote you can switch to Hustle mode, which reduces the air volume in the chamber, preventing the shock from reaching the last 20% of the travel, at the same time, the progressivity of the shock compression curve in the available travel increases drastically. In this way, the sag is reduced and, most of all, the overall behavior of the bike changes completely both uphill and in the less steep pedaling sections and also in the most twisty parts, where the suspension is more responsive at the exit of corners. The Float X Gemini has the standard 3 positions Open, Medium and Firm as well as the Open position compression adjustment. Hydraulic adjustment works both in Flow and in Hustle mode. The Float X compression curve is adjustable using the internal spacers: on the Jekyll it comes with zero spacers. 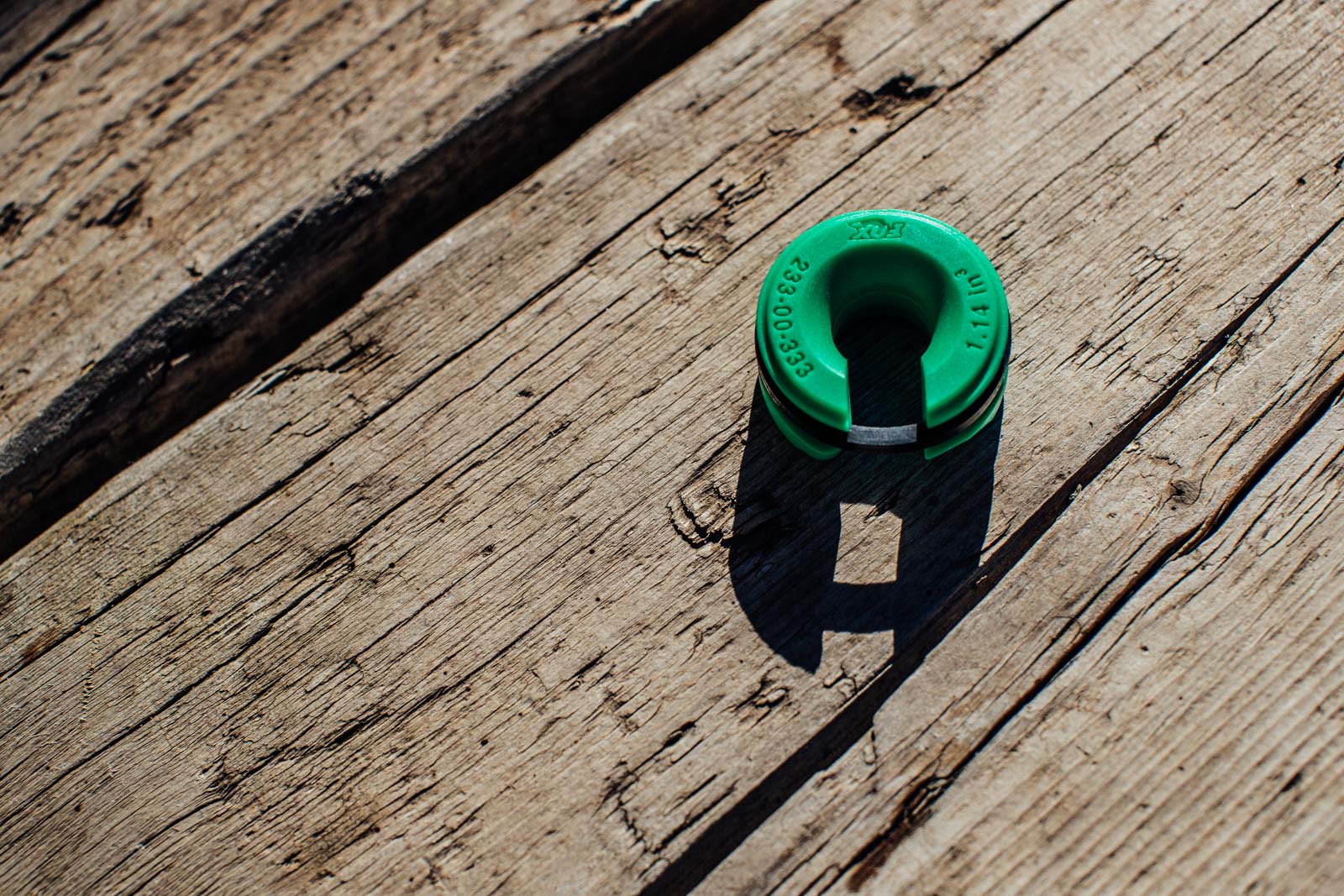 The DYAD worked as a pull shock while the Float X works in the traditional push (compression) mode, consequently the kinematics have been entirely re-designed to support the new shock. The system is still a single pivot with linkages that have structure and design similar to the previous model, but with the shock on the opposite side of the link, in order to be pushed and not pulled. In Flow mode, the compression curve is slightly and constantly progressive along the travel. The curve becomes highly progressive in Hustle mode due to the shock air chamber reduction, as already said. Wheel travel is 165mm matched with a 170mm fork travel. This is in line with the most aggressive Enduro bikes. 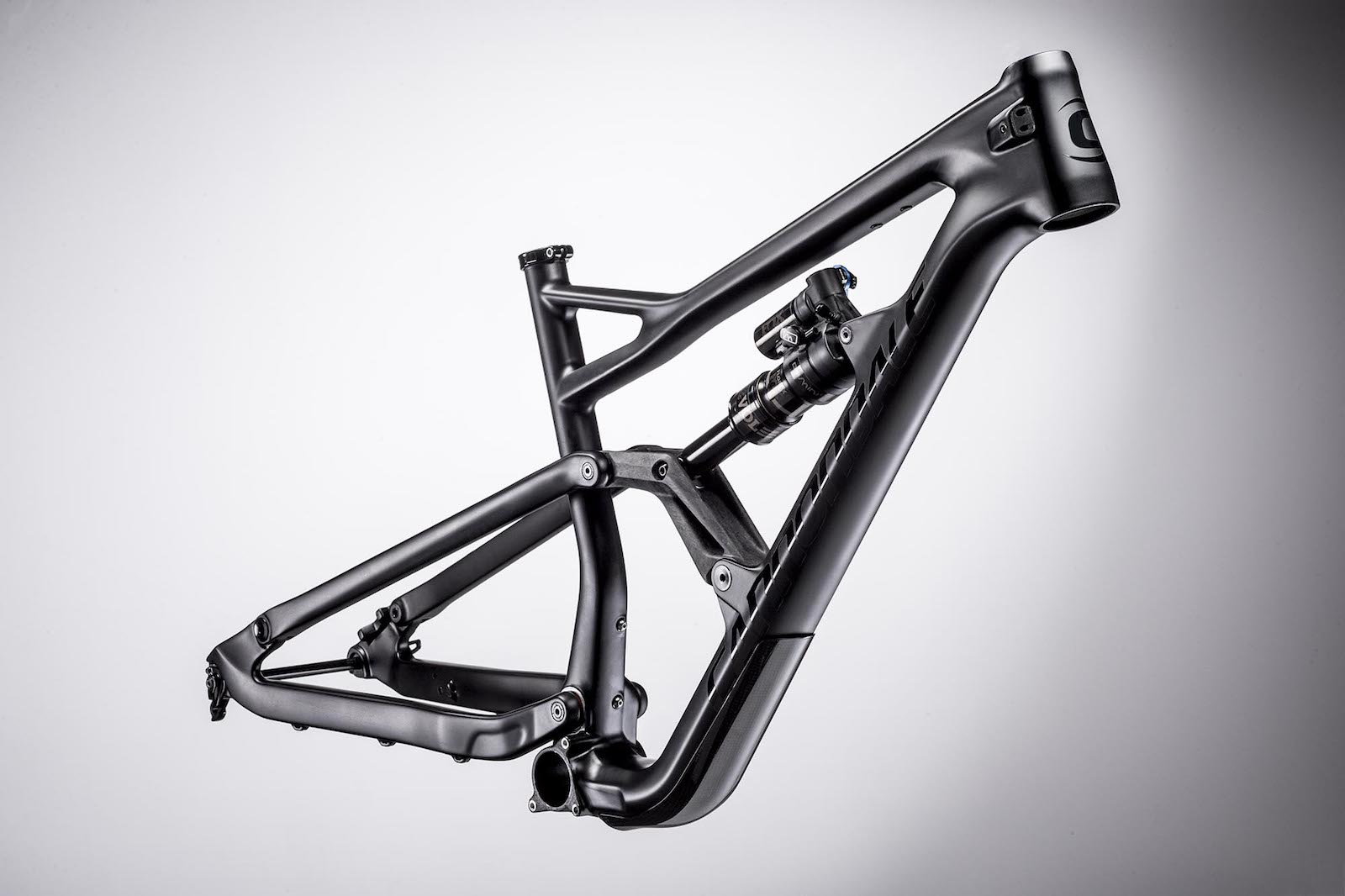 The frame is fully made of unidirectional carbon fiber using a specific technology, dubbed BallisTec, which characterizes the best Cannondale frames. Both the front and rear triangle and also the rear shock link are made of carbon in order to increase stiffness and reduce the weight. The link is made of carbon fiber on all of the builds of the Jekyll, included the ones with aluminum frame. The peculiar design of the frame, in particular the high shock position and the curved link, and the wide bend on the lower section of the down tube, are aimed at leaving enough space for a handy and well sheltered bottle cage. 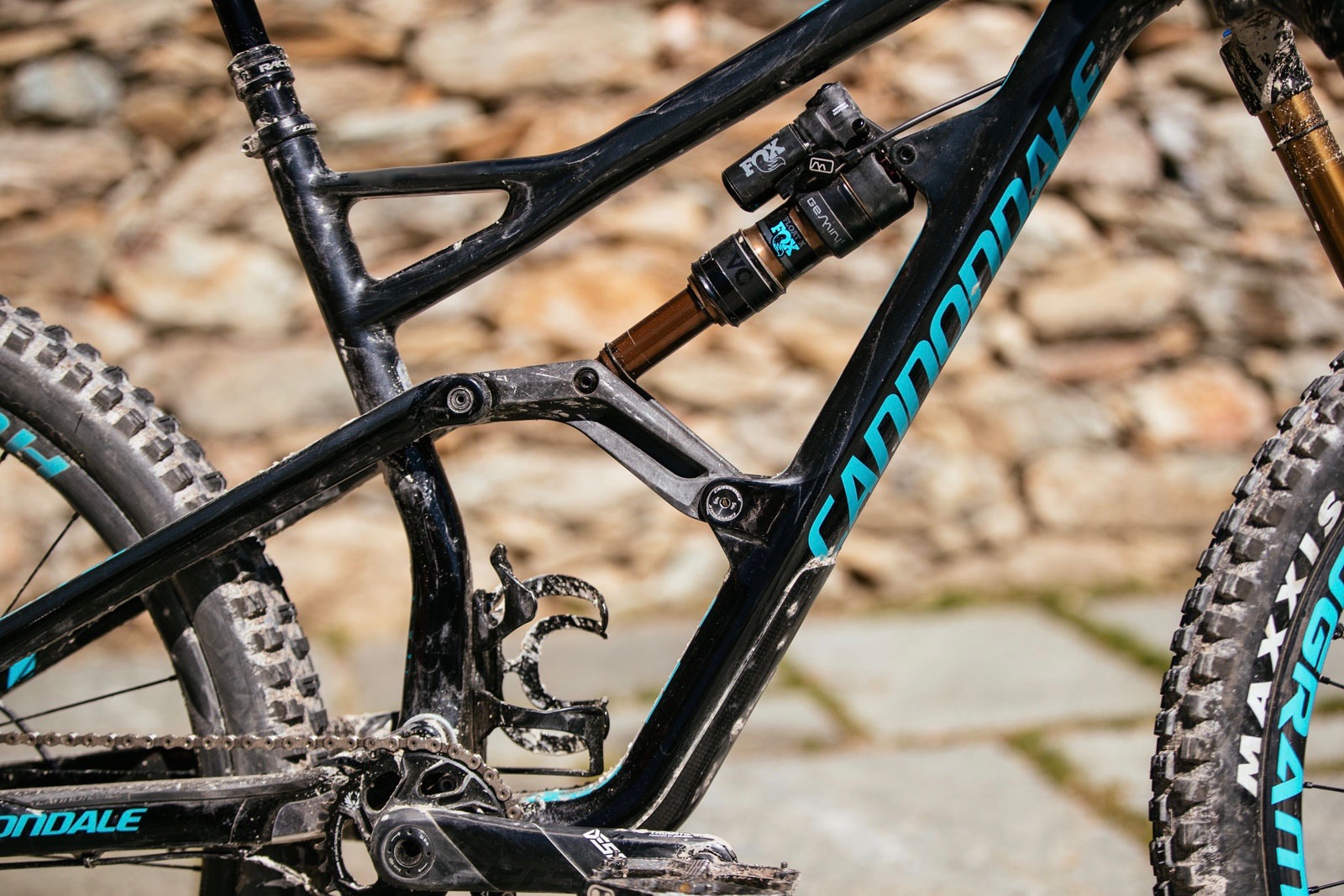 Since the lower part of the down tube, given its curvy shape, is more exposed to possible hits, Cannondale installed a solid carbon protection, on which a lot of work has been done to make it light and at the same time impact-resistant. Between the down tube and the bottom bracket, which is protected by the same carbon shell, is the exit port of the cable routing, which gives cables the right angle to keep them as close as possible to the frame. The access ports near the steering zone, aside the head tube, are well thought out: the cables follow a clean routing path to the bar, not disturbing the steering movement and avoiding scratching the frame. The frame can also support the Shimano Di2 electronic shifting system, including wire routing and battery pack. The chainstay is protected by a rubber cover and a metal plate. The inner side of the rear triangle pivot, the most exposed to chain slap, is equipped with a specially shaped rubber protection. 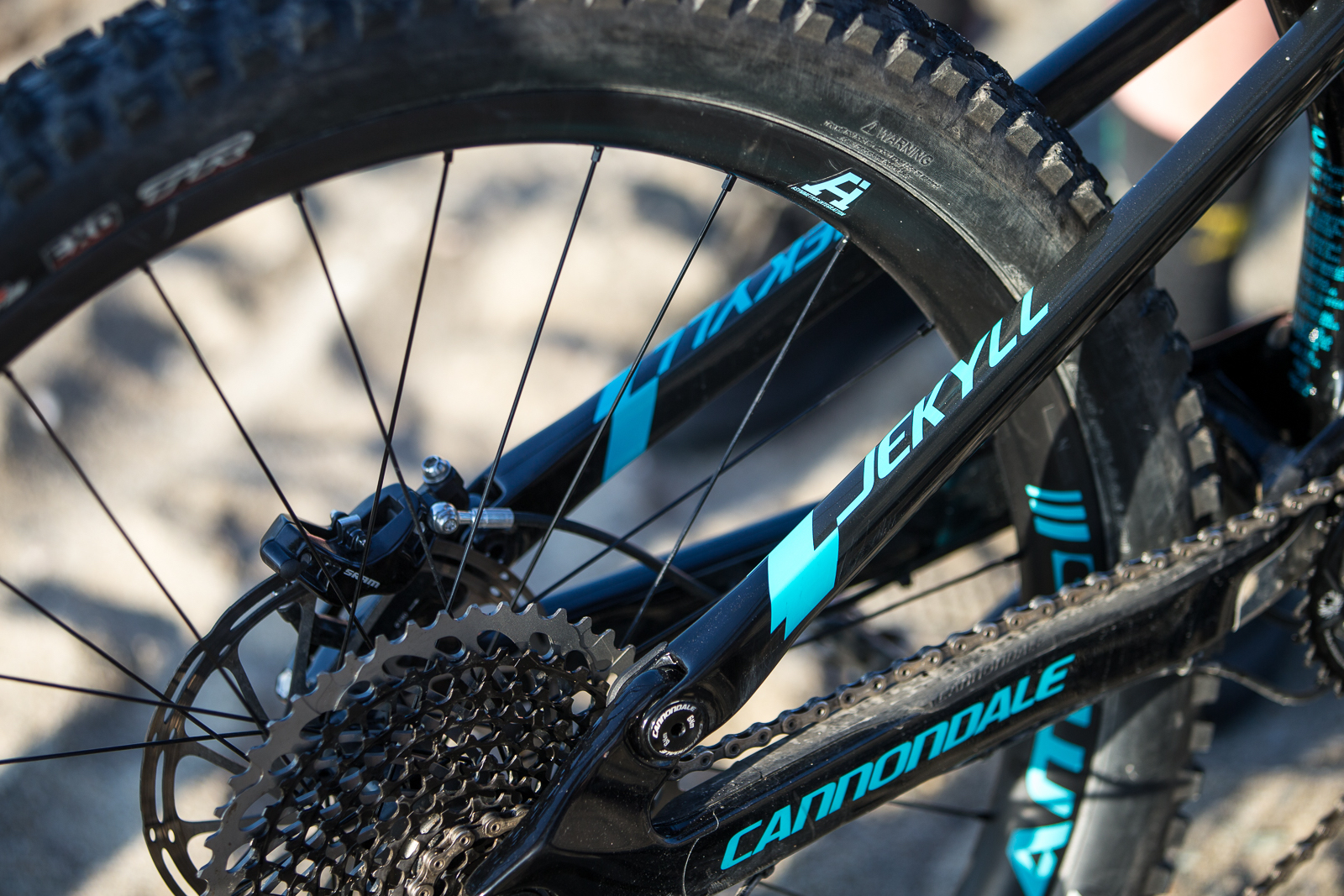 One of the main developments of the new Jekyll is the shape of the rear triangle and its asymmetric connection to the frame, with the so called Ai (Asymmetric Integration) technology. It allows Cannondale to build an extremely short and stiff rear triangle, leaving space for wide tires. Wheels are 27.5 with Boost hubs, dished 3mm on the drive side to have the wheel perfectly centered on the frame. The crankset is installed onto a 83mm spindle to provide the right chain line alignment and further stiffness in the bottom bracket area. The geometry of the new Jekyll is definitely aggressive and rather original, with a 65° head angle and a 420mm rear triangle, the shortest in the Enduro segment. The seat tube is very steep. With regards to Jekyll geometry, Cannondale said their goal was to build an aggressive Enduro that was still balanced and responsive, instead of a mini DH. The Cannondale launch camp took place in Finale Ligure, organized with the support of our friends Just Ride and Ride On! Since the riding test was along our home trails, we could focus exclusively on the performance of the new Jekyll. 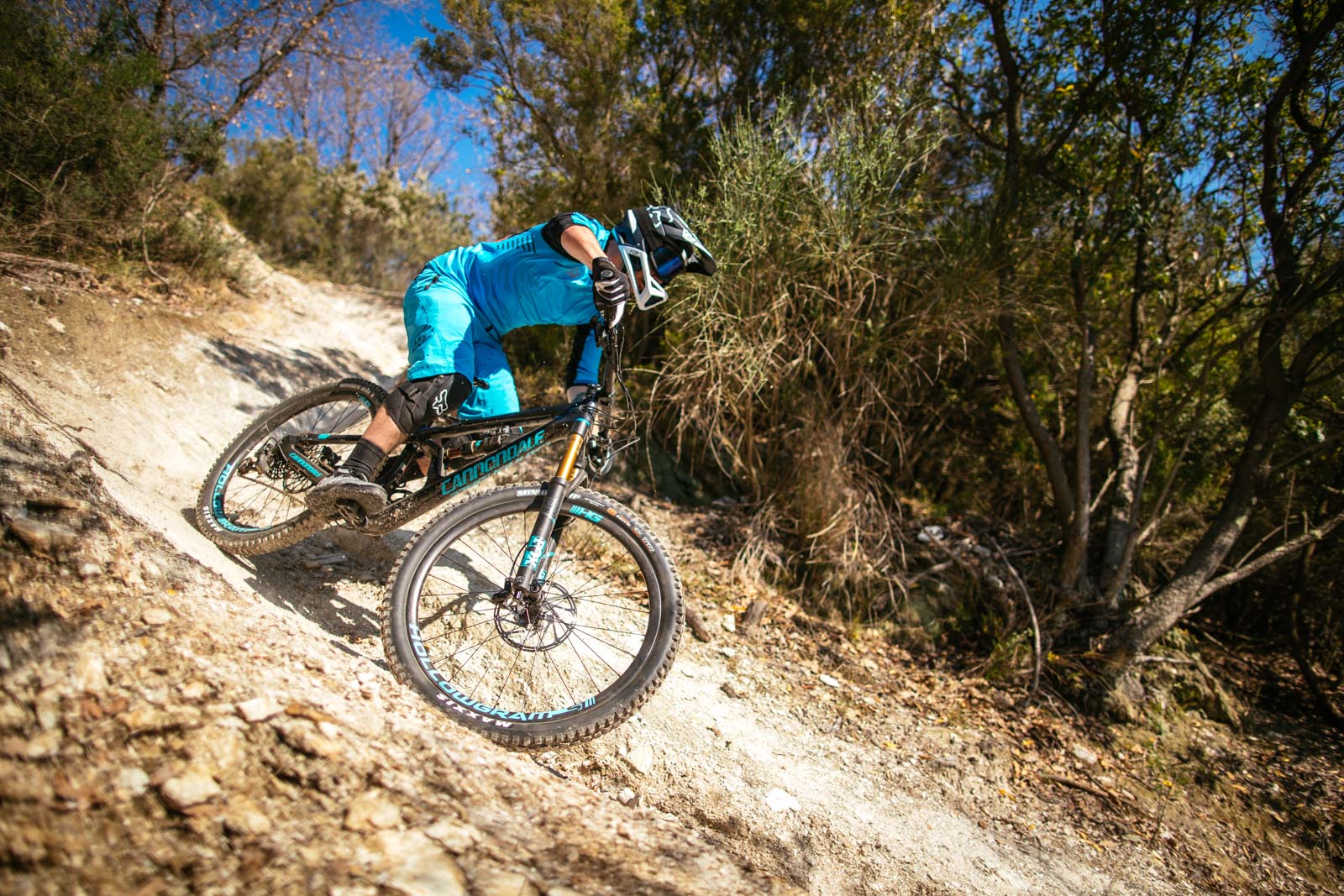 It was planned to use bike shuttles, so we only had a few climbing sections to ride and this is why our review of the climbing behavior is very brief. The riding position is comfortable thanks to the steep seat tube angle and the long top tube. The suspension system set in Open position and Flow mode bobs noticeably, but as soon as you switch to Hustle mode using the handlebar remote, this effect ceases almost completely. For further stability you can set the hydraulics in Medium position. 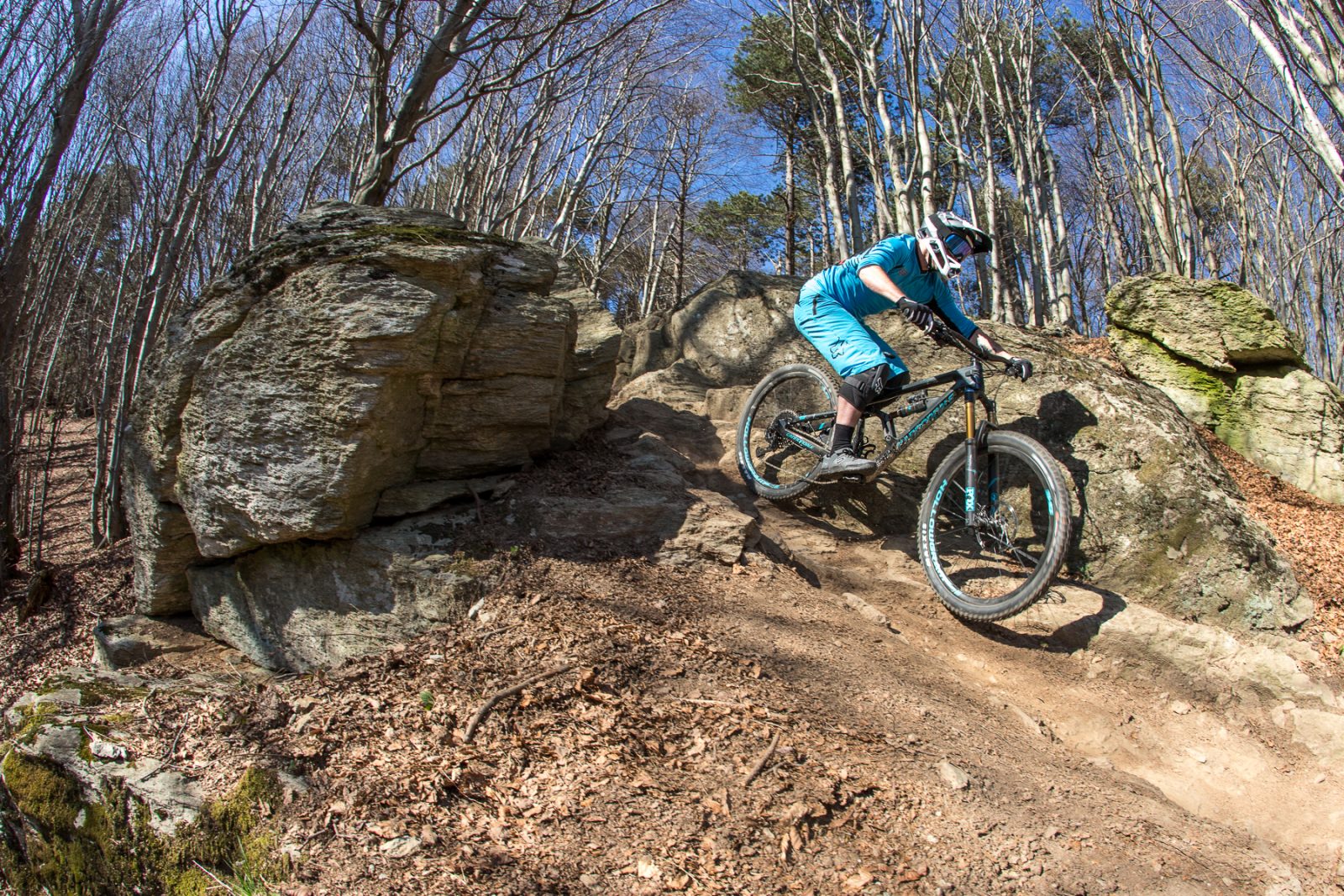 It took us a couple of rides to find the right downhill setting. Given its geometry, the Jekyll requires you to properly load the front. With the 65° head angle, the front-center is pretty long and this is usually compensated by a longer chainstay to put the rider at the center of the bike. Cannondale, instead, decided to build an extremely short chainstay to provide cornering nimbleness and this requires an initial effort to get used to these features that in the end was rewarded with incredible responsiveness. Starting with the suggested 25% of sag we added 15psi to stay higher on the rear suspension and load the front end better, without losing grip on the front wheel. We also lowered the stem to help with bringing our weight distribution forward. After these adjustments, we started to literally enjoy the Jekyll maneuverability, and the fast and twisty Finale Ligure trails became pure fun. Safety and stability at the front and agility out at the back. The suspension, despite the higher pressure we set on the Float X, was really plush, allowing us to use all of the 165mm of travel. Not only plush but even very responsive: it was extremely easy to pop the wheels off the ground enabling us to have a very dynamic style both on rough terrain and on fast cornering sequence. Hustle mode can be set also downhill to have higher suspension progressivity and support with just one click. This becomes very useful especially on non-steep sections or facing back to back corners. It’s worth noting that the initial sensitivity of the suspension does not change. The new Jekyll is a real Enduro race weapon. You don’t feel confident straight away but, once you get used to it, it can push your limit much further than other more competitors which can feel more intuitive initially. Cannondale dares an innovative geometry, that rewards riders with good riding skills. The Hustle mode is not essential to have fun riding the Jekyll, but a proper use allows to you take advantage of the whole potential of this Enduro race weapon.

Cannondale provides 4 builds, all equipped with 1x drivetrains and FOX suspension. Build 1 has a full carbon frame, while builds 2 and 3 have carbon frame and link but aluminum rear triangle, build 4 has an aluminum frame and the link made of carbon fiber. The tested Jekyll 1 in Medium size weighs 12.8Kg. 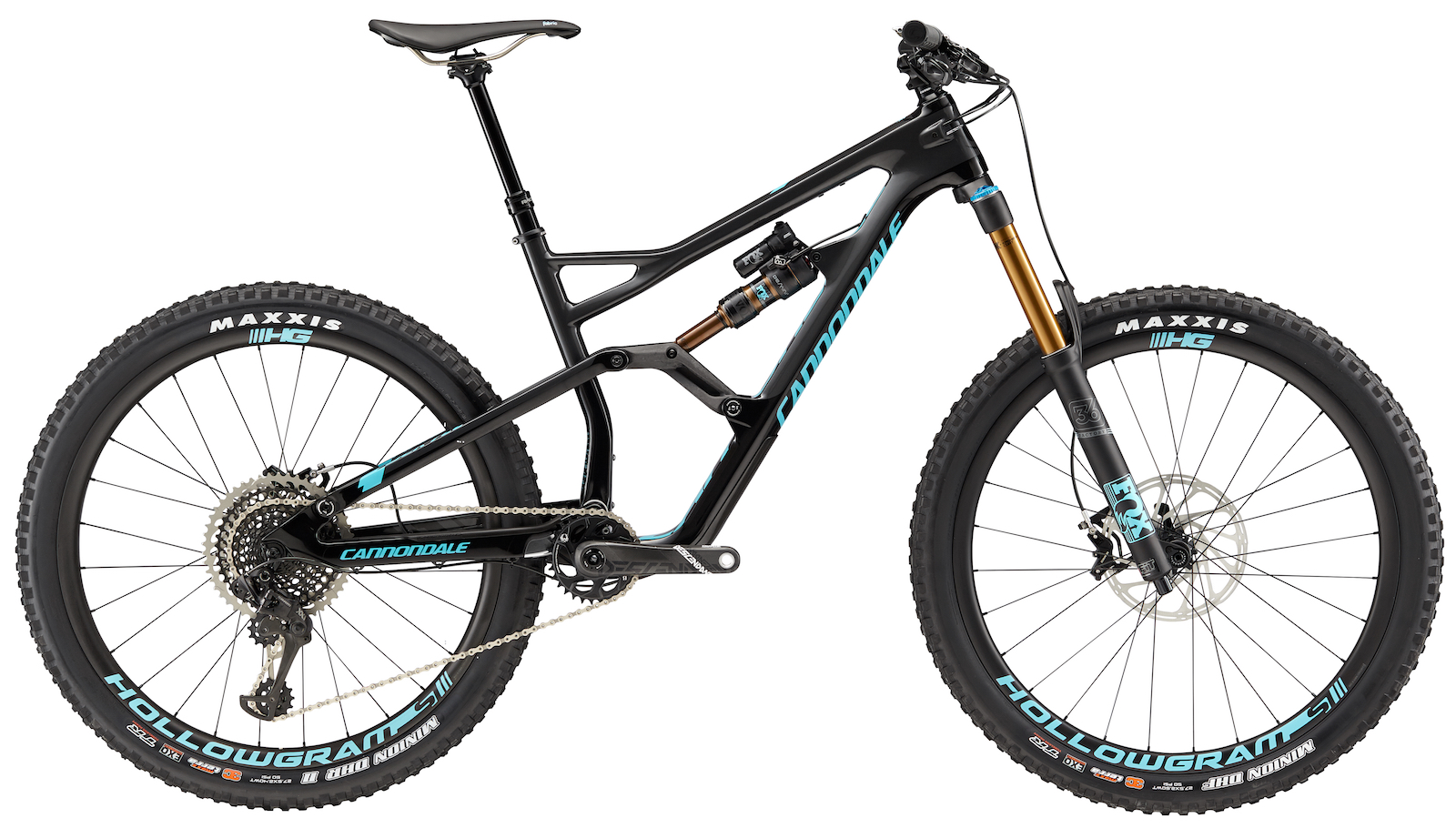 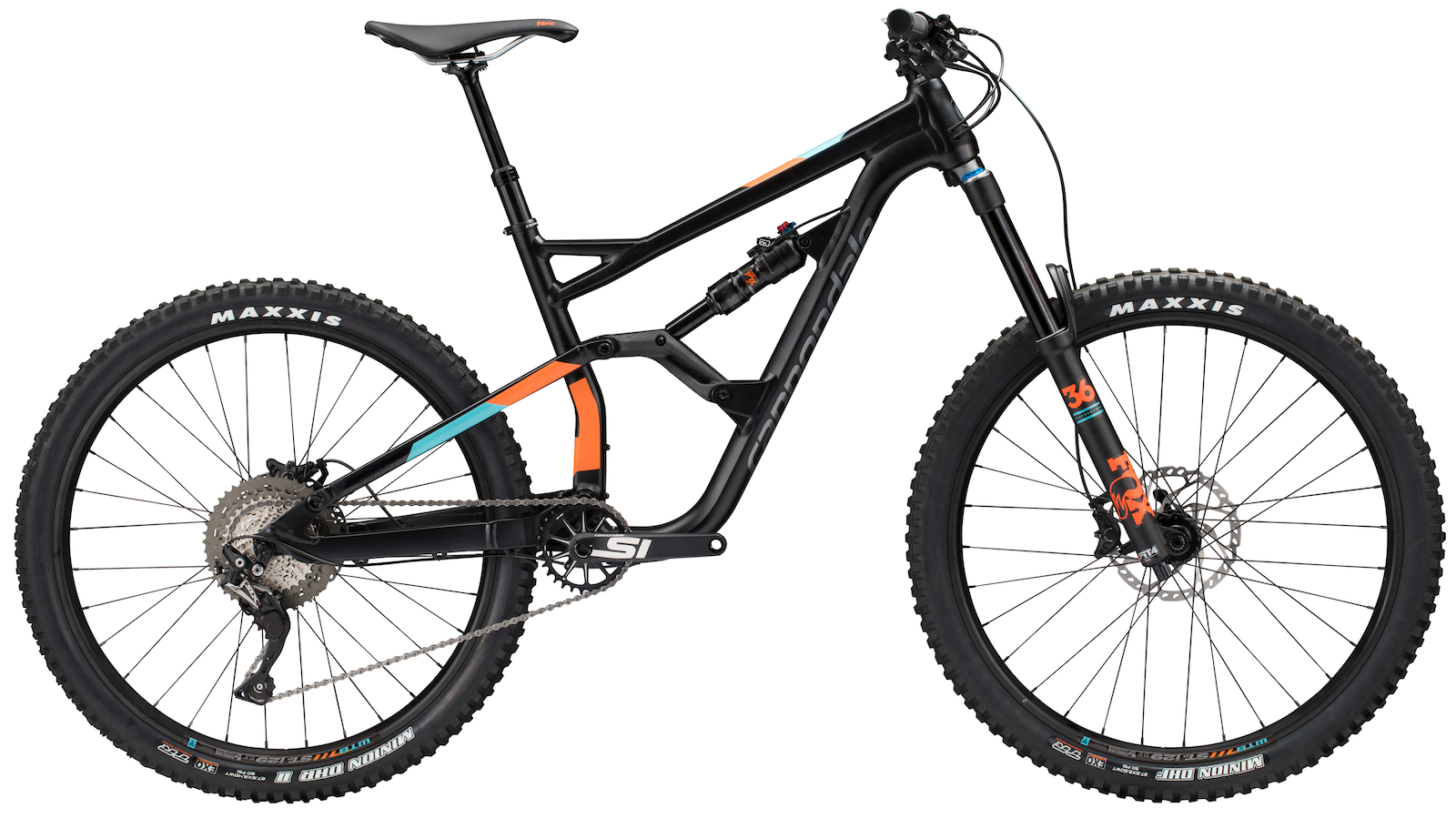