After years of mainly making aluminum bikes, Kona decided to dive into the world of carbon fiber with the Process enduro fleet, featuring a new carbon version and a handful of aluminum models. We had the privilege to be invited by Kona to Tignes, France, in a wonderful alpine setting where they showcased the new creation and let us test it out. Here is our report.

The 2018 Process fleet has been fully revised: with both the aluminum version and the new carbon version, the Process 2018 is a completely new bike. 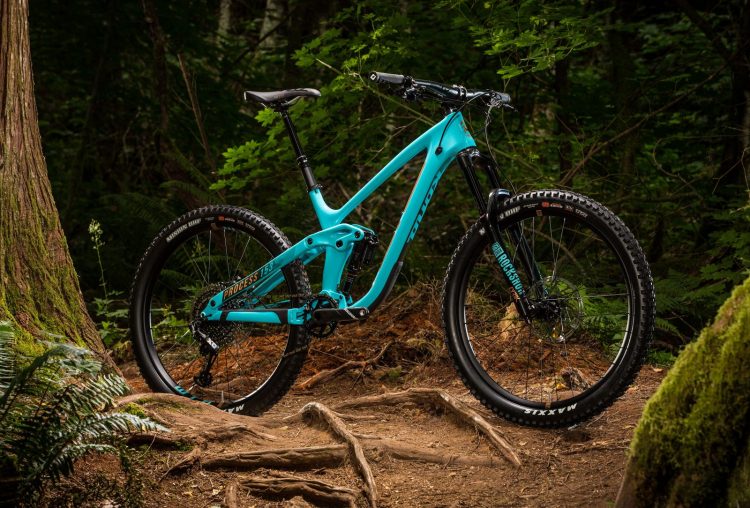 The Process will be available in a very broadly spread out 7 builds: two carbon 27.5 models”, two aluminum 27.5” models and two 29” models which are available in aluminum only, plus a more extreme park version with a coil sprung shock.

Inspired by the Operator, the kinematics are optimized for the compression curve of the Rock Shox Deluxe shock, installed on all models. “We came up with a compression curve which is almost identical to the optimum suggested by RockShox for the Deluxe”,  said the Kona team when they showed us the bike, explaining that they worked side by side with the American suspension brand to obtain the maximum benefits from the frame-shock matchup. Compared to the previous version, the new process is like a mini DH bike, with a strong downhill oriented suspension which, at the same time, doesn’t affect pedaling efficieny too much.

The rear travel is 153mm combined with 160mm at the front.

The Process has a metric shock with Trunnion mount and Boost 148×12 rear hub spacing. The rear tire clearance does not allow to install Plus tires because “the Process is a bike meant to go fast downhill, while plus tires are made for easy-going rides”.

The geometry of the new frame is peculiar. Here’s the chart: 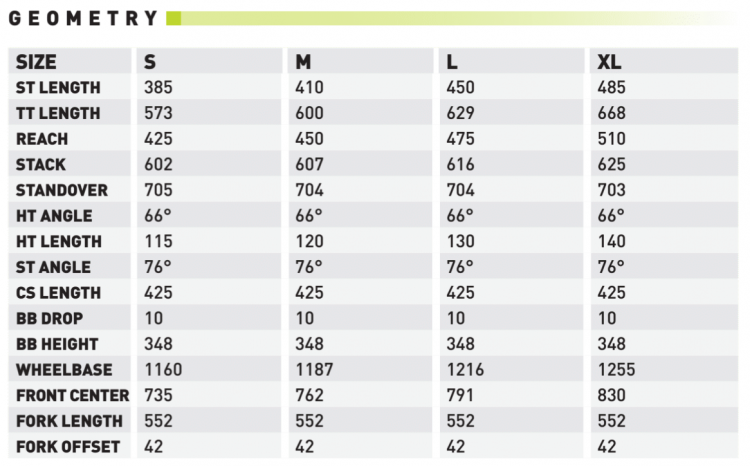 Here are the three most surprising aspects:

There is nothing unintentional about the Process’ numbers: the steep seat angle allowed Kona to build a short rear triangle, minimizing the tendency of the bike to lose traction on climbs. The long reach is directly related to the virtual top tube length/seat tube angle combination: since the effective seat tube angle quite steep, with the same virtual top tube length, the reach increases. This long reach is paramount to centering the rider’s weight between the wheels and help maintain control.

The head angle of 66° and the virtual top tube length, as well as the wheelbase, are not far from those of other bikes on the market or of Kona’s previous model. 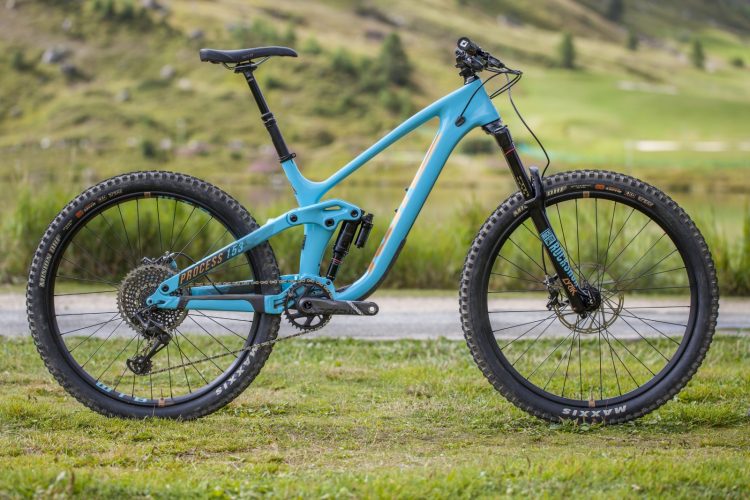 Kona didn’t have a carbon enduro bike until last year, in 2018 they decided to deliver for their customers with two builds.

The development of the Process Carbon took a full 3 years, including loads of extensive on trail testing. The final product is a full carbon frame, except for the chain stays, which are made of aluminum for the sake of durability, especially in case of physical impacts against rocks and other trailside casualties. 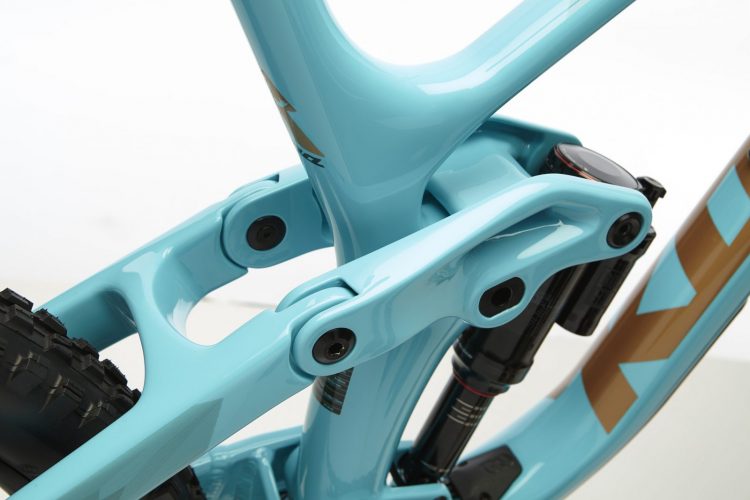 The down tube is protected by a solid rubber cover, and there is also a rubber sheath which protects from chainslap on the chainstays. 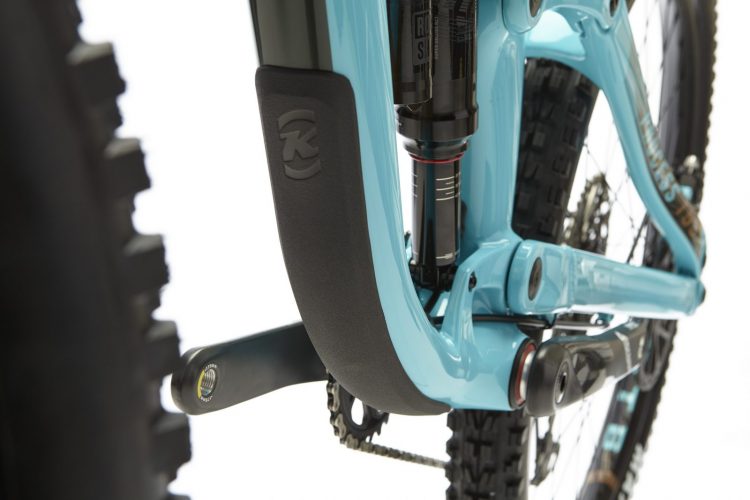 The cable routing is internal, neat and well finished. The Canadian company has been extremely thorough – they put an extra rear derailleur hanger inside the cap shown below. 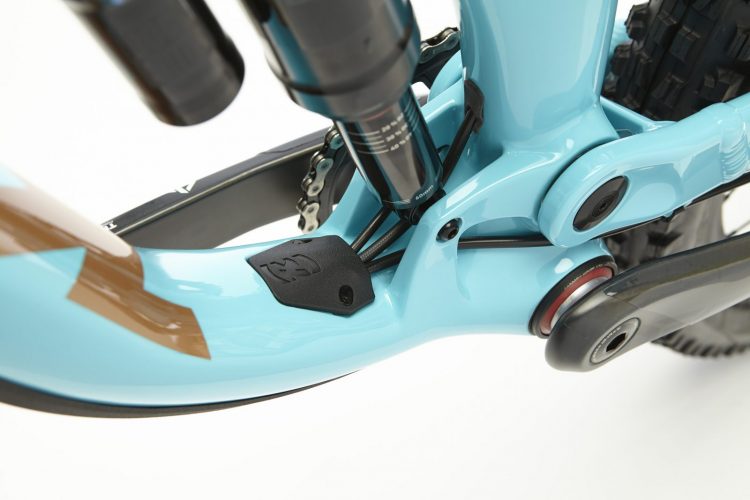 The derailleur hanger keeps the casing in place and can be used to replace the one mounted on the frame when damaged. 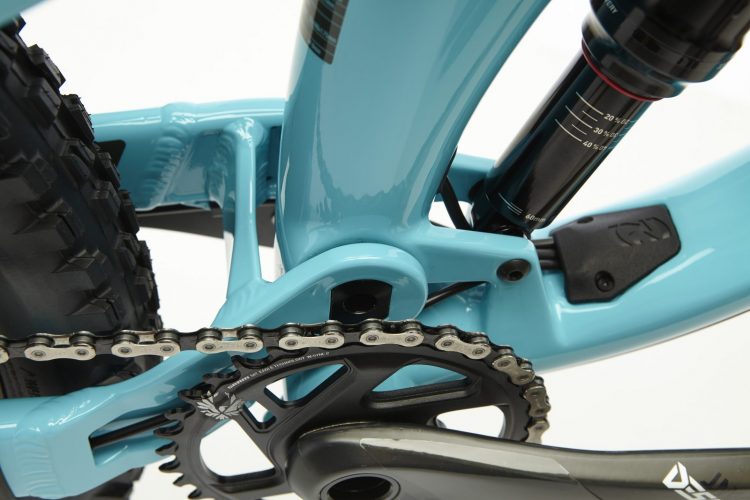 The frame does not have a front derailleur mount. It is optimized for 1×12 single chainring drivetrain. 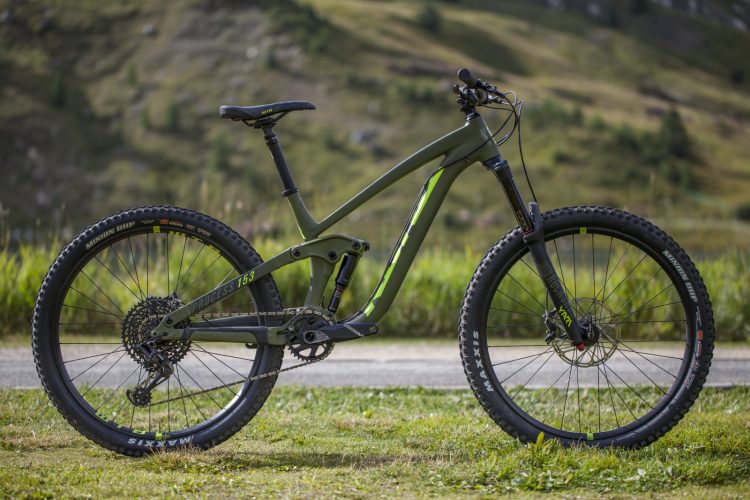 The aluminum Process has the same kinematics and geometry of the carbon version, but it is cheaper. Also, in its case, the cable routing is external. 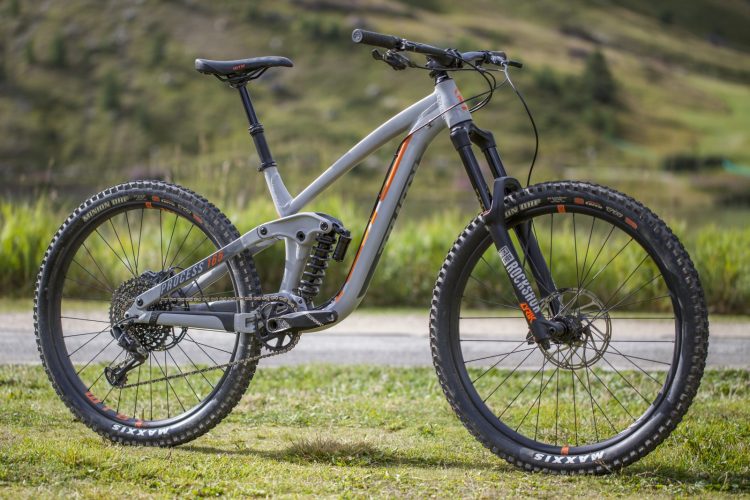 More extreme park version, the 165 is equipped with a RockShox Super Deluxe Coil spring shock and a 170mm Lyrik fork. 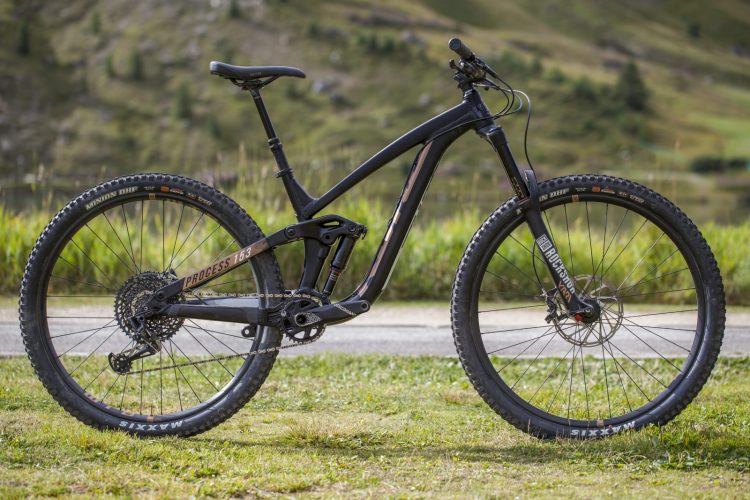 Designed specifically for wagon wheel lovers, the 29er comes solely in aluminum. The travel is 153mm at the rear and 160mm at the front. The geometry is almost the same. 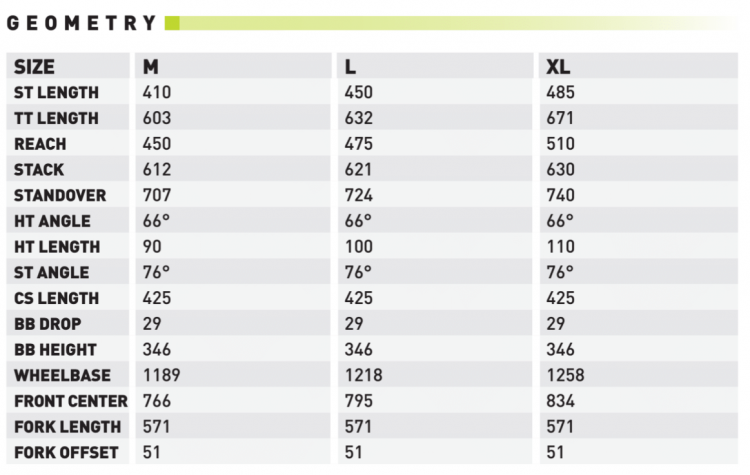 The Process 29 will be available only in M, L and XL sizes due to limited space in the frame for big wheels and such aggressive numbers.

We had two intense riding days with the Kona team in Tignes, a wonderful village right past the Italian-French border, hidden amongst high mountains and sprawling glaciers. Tignes bike park is a unique place: you can ride for free throughout the whole season, there are thousands of trails, ranging from beginner to pro-lines. There are also a lot of enduro trails: mainly natural singletrack which starts from the park trails at many points. Here we put the Process Carbon to the test. 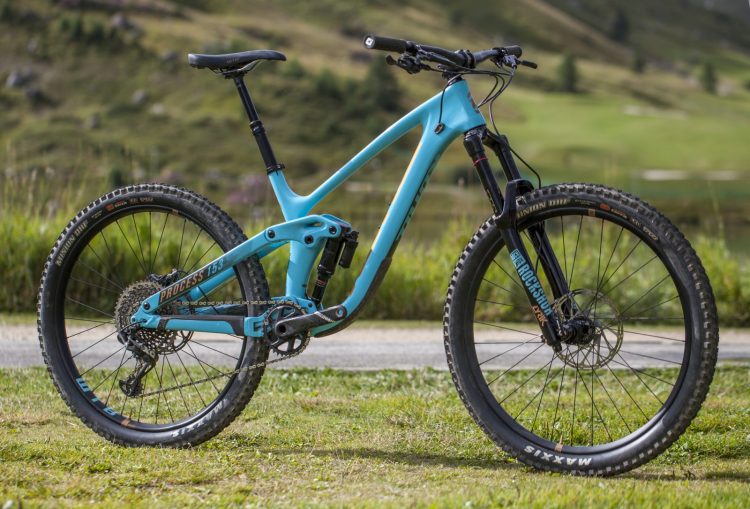 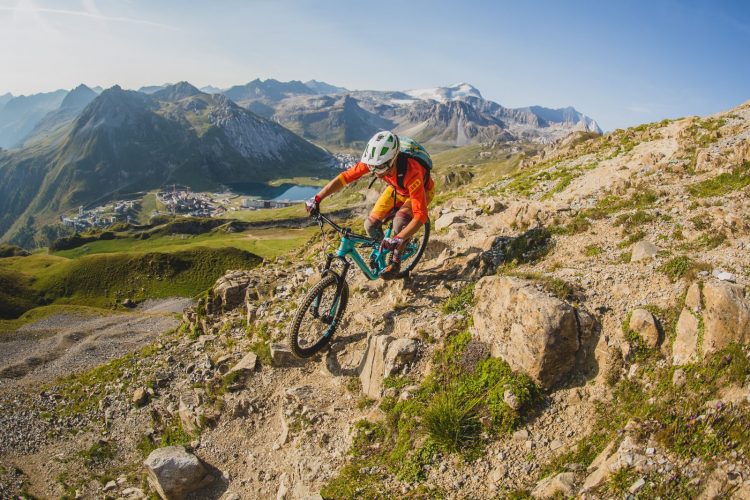 The first feeling about the Process is that of an extremely intuitive bike. Of course we know RockShox suspension very well, so we already had the settings fairly well sorted out, but you really feel comfortable on the bike right away. Thanks to the short rear triangle and the not so slack head angle, the bike is handy on technical sections and a real rocket in the turns. The short rear triangle comes into play on manuals, for example pumping rollers: the front end pops up quickly and easily. 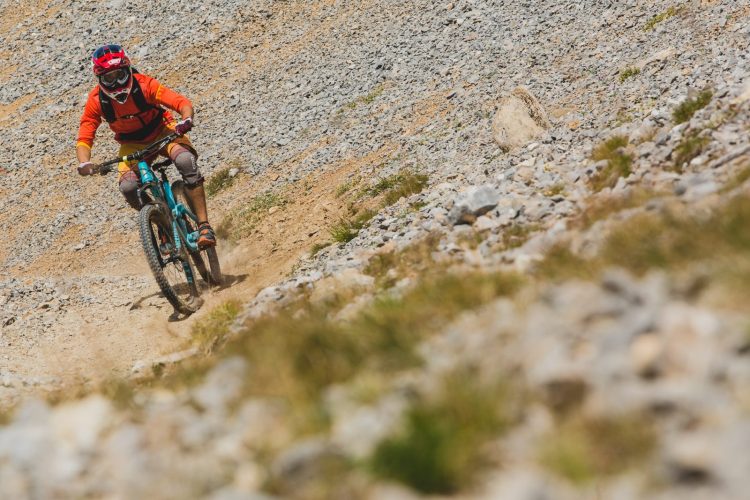 We didn’t ride the Process on long climbs, but on short up and downs of the enduro trails we were really impressed. The seat angle is very steep and the front wheel never lost grip, not even on the steepest tracks. The bike pedals relatively smoothly without locking the shock: it has good maneuverability and doesn’t sink in the travel or wallow. The suspension is plush, especially at early travel, and this is why we believe that, on long and flowing climbs, it is a good choice to take advantage of the high-performing Deluxe compression knob. 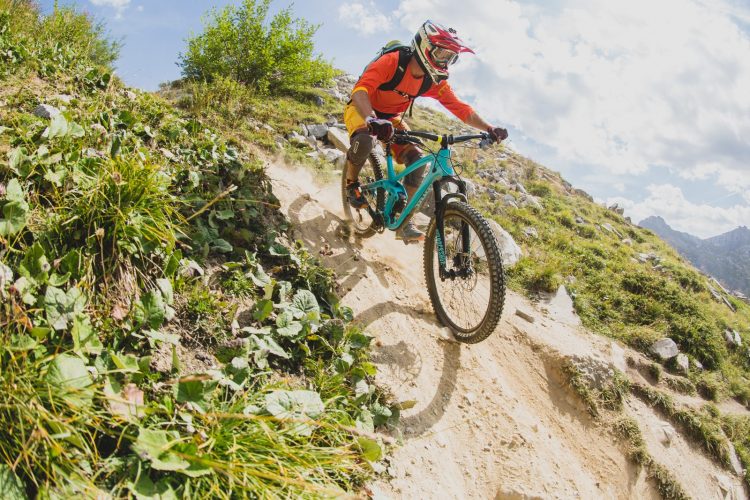 On paper you’d think that because of the rather lengthy reach, the Process would feel quite long, something that forces you to ride in an uncomfortably stretched-out position. On the contrary, it actually felt well centered between the two wheels and it was never hard to load the front end. This is achieved thanks to the short rear triangle. Despite a long reach, it was easy to feel “in it” on the bike, sitting quite balanced at the same time, especially on jumps, as we had the chance to test on the various doubles and tabletops in the bike park. The rear suspension, as already said, is quite plush, in particular at early travel, and soaks up small and medium bumps really nicely. At mid travel the support is good, the bike flows smoothly on rough terrain and you feel in control. Deeper in the travel, the high progressivity prevents bottom outs. We really appreciated how the Deluxe manages the “short” 153mm travel of the Process, it feels like it’s longer.

Our feelings about the Process Carbon are totally positive. Even if it is only a first impression (two days of riding are not enough for a comprehensive review), the bike seems to be an extremely solid product. The geometry, which is so different from that of other bikes, and the extremely short rear triangle on the L size, require a bit of time to adapt, but they make the bike really fun to ride in tight turns.

The specs of the 153 CR-DL are perfectly calibrated and well thought out to the smallest detail. More info about sizes, geometry and specs on the Kona website.