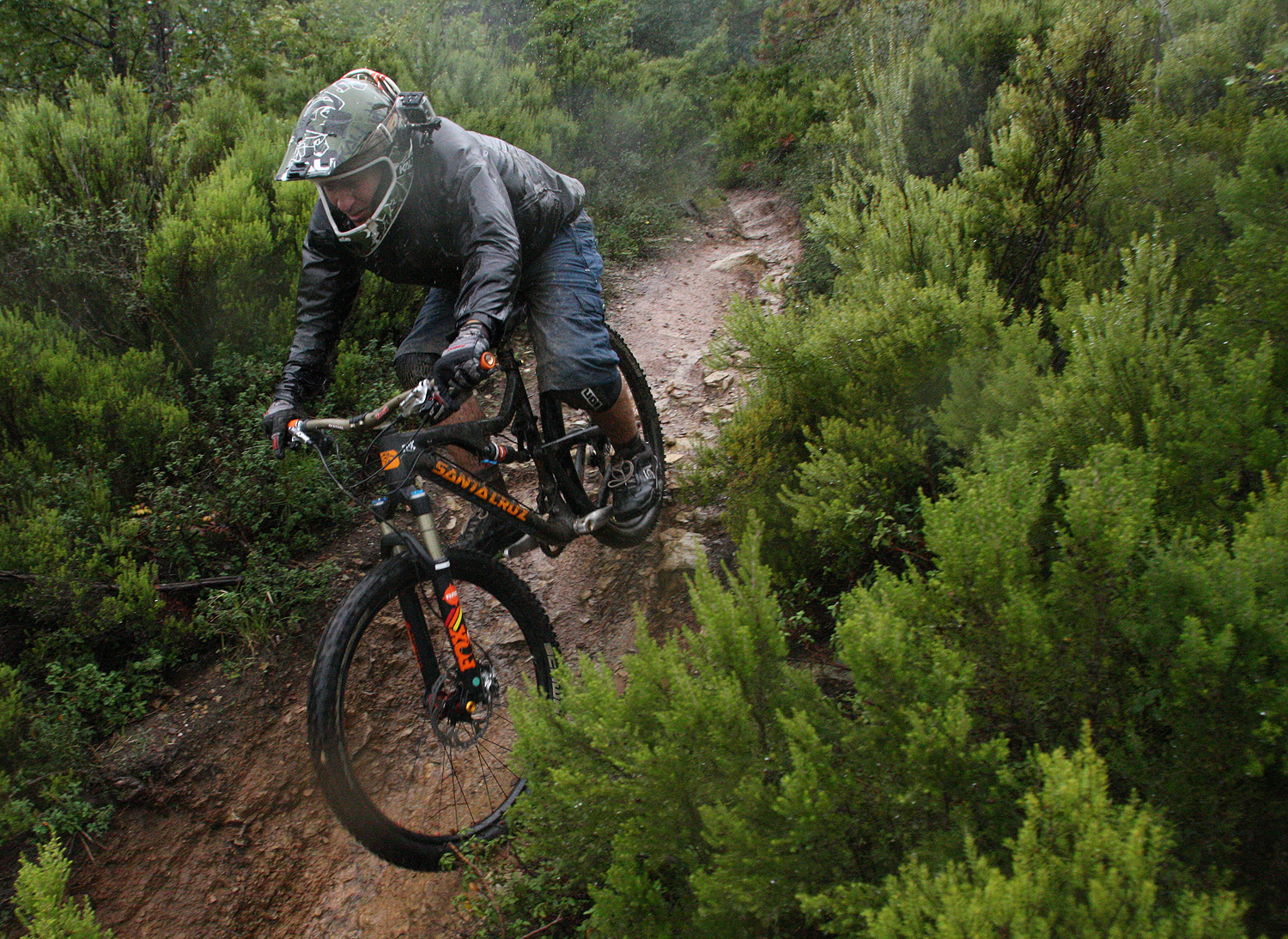 Fox Suspension over the years has developed lots of it’s suspension products with the help of it’s professional riders that use their suspension in race and non race situations. The Racing Applications Development program was set up in order to focus on, develop and differentiate their up coming and special race products from their day to day products. The final aim of the RAD program is that the RAD products and features eventually find their way to market in some form or another.

Fox though realised they could not always rely on racers alone for their product feedback and development, so engaged a range of other rider groups to feedback into the program their thoughts on what they are developing. One such group is journalists, due to our close connection to the riding public and independence/broad idea of what mountain biking should be, MTB MAG was invited at the end of the Enduro World Series in Finale Ligure to test and compare some of their RAD products. The aim was to see how the current suspension development process was progressing and feedback our feelings about what we were testing. 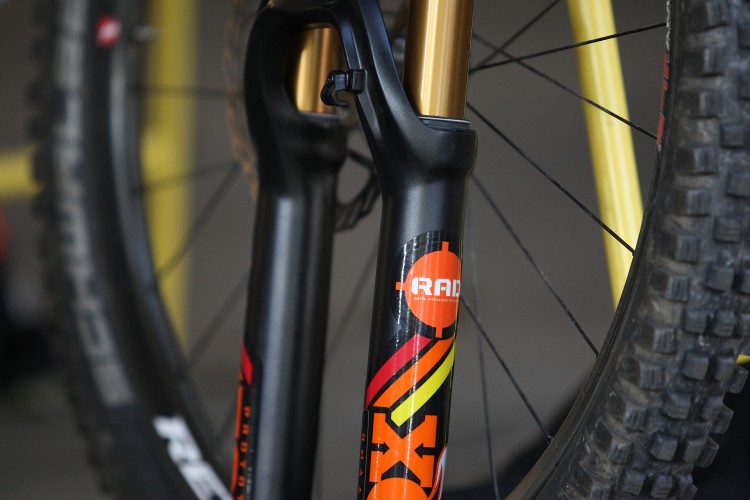 If it’s got this sticker on it, it’s something special.

Methodology
Testing in most cases needs to be done in a methodical way, so its possible to actually gauge a difference if there is one. The first thing we had in our mind was scepticism. It’s important to think that you are going to learn nothing, (In scientific terms it’s called a Null Hypothesis) although we weren’t measuring things with machines, we were measuring how the products felt with our riding.

We were presented with a large size Santa Cruz Carbon Bronson with a 1 degree angle set and a base line suspension product from Fox’s current range to start from, in this case it was a FOX 36 with this years cartridge and a Floax X rear shock. Both were pre-worn in and set exactly to our weight, with a suggested rebound setting that avoids the risk of the shock being too slow in the conditions we were riding in. So in this case it was a fairly loose rebound setting. We then did a few runs to gauge how the fork and shock felt and check our settings and sag. Spending time with the FOX technician was interesting as we set sag precisely in both cases to the mm, and pressure was tuned in increments of 1 psi, there was no room for error; it meant it was a fair test.

After riding the first few times we stopped switched over the fork and shock, reset the sag and rebound so that it was the same as before and went out on the trails as before and rode with the new components.

What was worth noting is we tried to be as consistent as possible with our line choice and riding style, including braking points and speed. Our aim was to try and feel what was going on with the suspension damping, also though we managed to have fun at the same time, as that’s what biking is always about. 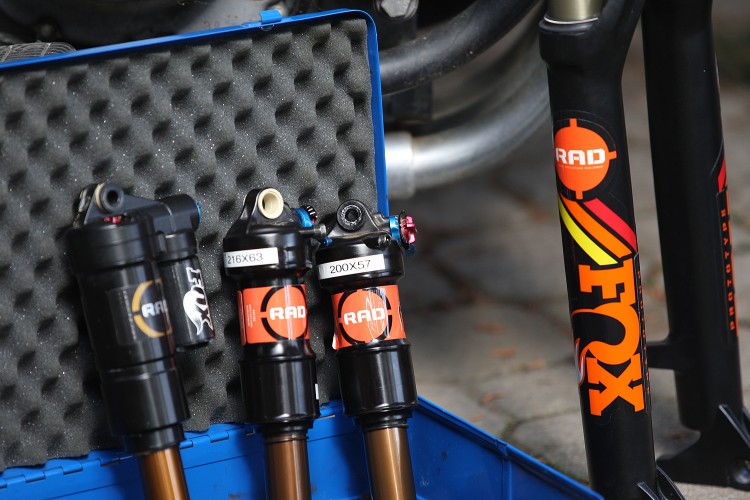 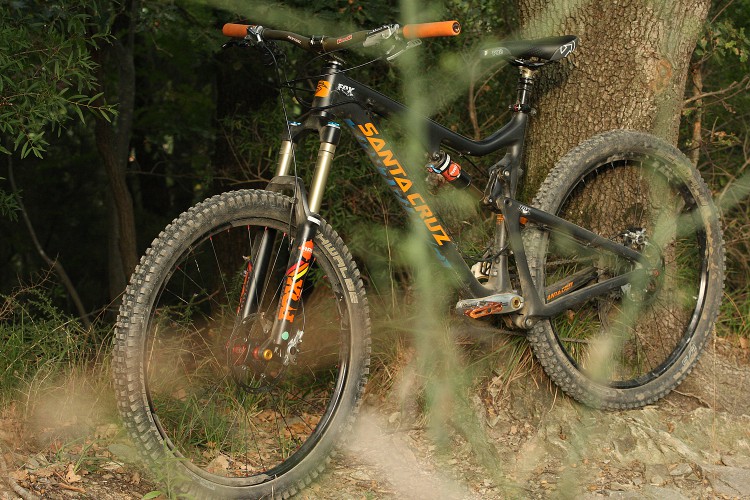 This was our test sled, a Santa Cruz Bronson C. We spent a lot of time discussing the cartridge features. 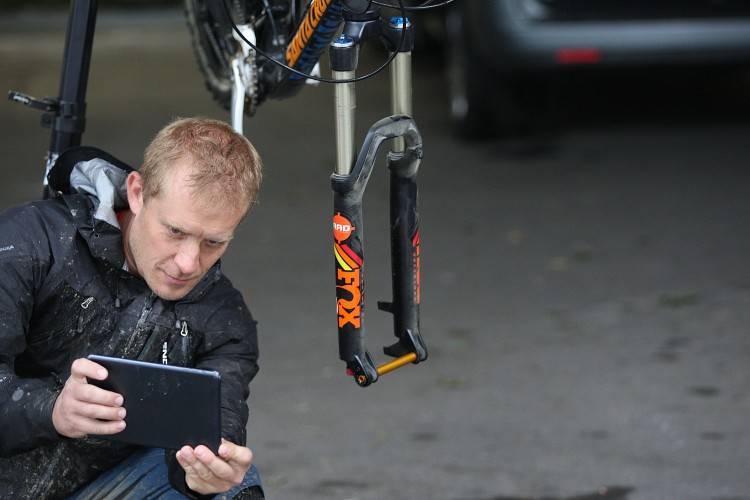 Reading the tech specs, and looking at the fork up close. 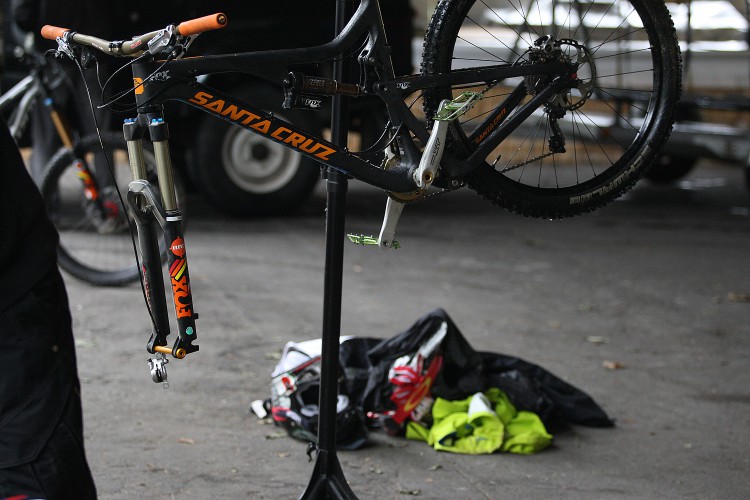 Bike during the change over point to the new RAD set up. 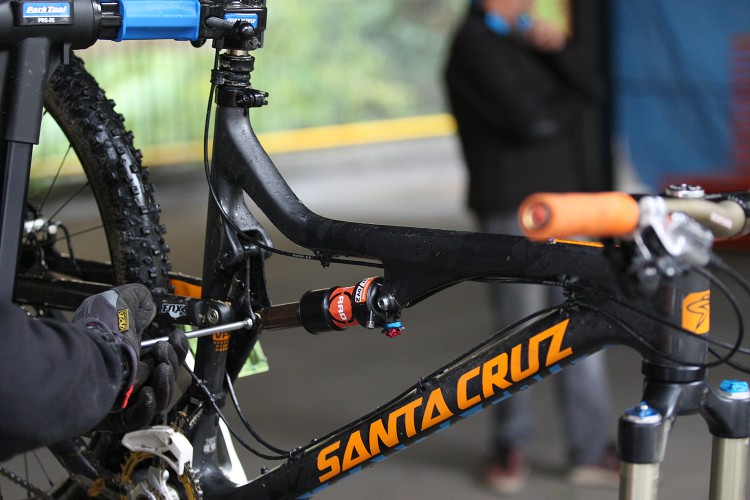 Results
Doing this type of testing was a very interesting experience. Firstly we noted that our bikes having been in the hands of experienced technicians,  were set up in a very balanced way, the front and rear suspension working together in unison. The bike was balanced in all the situations where we pushed limits and called on the suspension to perform.

Riding the base line set up of a 36 and Float X was great, we felt we had a really great system under our feet that responded to our inputs and the trail conditions in a positive way, at no point did we find ourselves not enjoying the ride. After our first runs we switched to the 34 with the new prototype cartridge and the RAD rear shock. The 34 from 36 switch can be explained by the fact that the 36 is their latest product on the market and we needed to have that as our baseline. We were not looking at the chassis as the point of the test, although it has some influence, it was the prototype 34 FIT damping cartridge that was our focus.

Out on the trail with the new fork and shock we tried to simulate our previous runs and discover what had changed. The first thing we noted was the mid travel support had improved, with the suspension returning to the middle of it’s stroke more positively. We felt that we knew where we were in the travel, whereas with the previous set up it was harder to define. Popping off jumps and hitting square edge objects was also interesting. The change in direction of the suspension as it got to the point of return and where the rebound damping takes over as the suspension travels the other way had improved. It felt smoother and under more control as we landed, returning us to a more perceptible point in the suspension stroke.

This moves us onto our next point, the contact feel on the trail had improved. We could actually feel the undulations and features of the trail more, but not in a harsh way. In simple terms it meant that wheel traction had improved, with the wheels remaining in contact with the ground more consistently.

As we ride with flat pedals we tend to push the bike more into the trail and use trail features to launch ourselves down the trail, our sensitivity to these movements also improved as we could feel what we had done, we didn’t just sink into the suspension. We noticed this especially when popping over compressions or into or out of corners.

Under braking we noticed less dive compared to what we have experienced previously and a more consistent platform response to our inputs, the bike was not nose diving or sinking in the rear as we changed our body position either. It made for a smoother more balanced ride.

As we got to the end of what we agreed as a group was a long, rough trail, we found that the shock performance had not dropped off, with no packing, just continued mid travel support. We can speculate that on the rear shock the larger air can has something to do with this performance gain. Heat build up was not really noticeable in the shock, although we could say we didn’t pay much attention to it, mainly because the suspension kept working well and we didn’t notice a change in bike response as we got lower down the trail. So it didn’t occur to us to check how hot the shock felt.

Small bump compliance improved in the fork, with the new cartridge it seemed less vibrations made it back into the bike and rider on the sections of track that encourage very fast small movements of the suspension, put simply again, a smoother ride and less fatigue.

The fork chassis was actually this years model, and although we did notice that the wheel tracking in tight twisty technical sections was not as precise as with the 36, we didn’t feel this was a bad thing, it also in our minds did not affect damping performance. 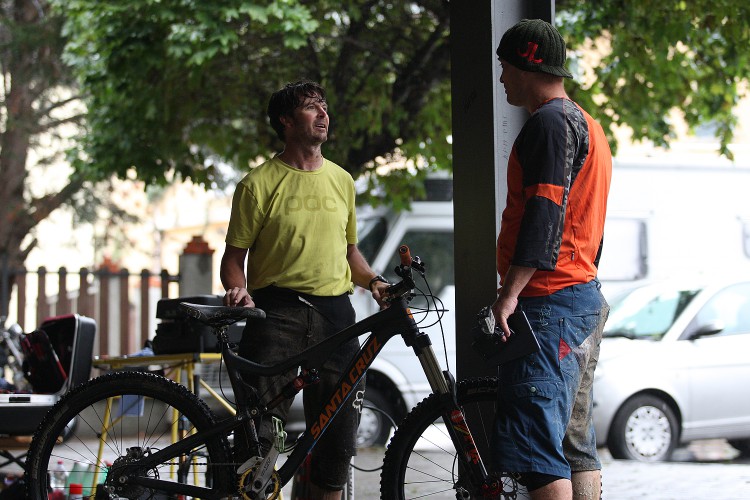 Marc Fitzsimmons Product manager from Fox, explains to us about the latest fork development and how and what we tested influences final production. 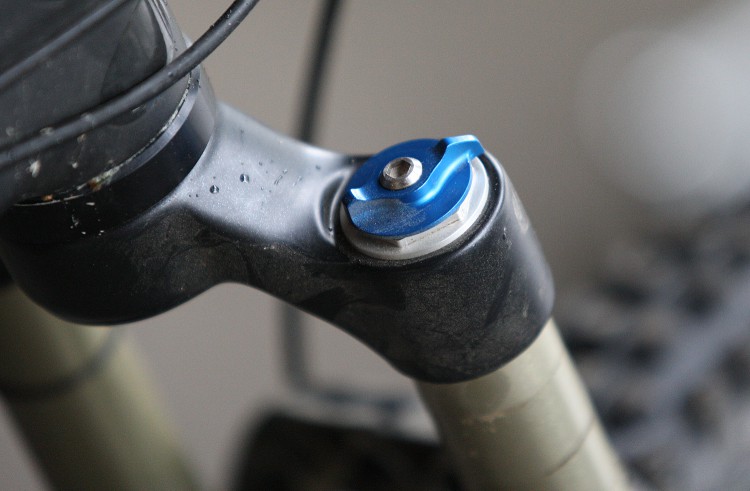 This was control was not important, we were testing in the open mode only. 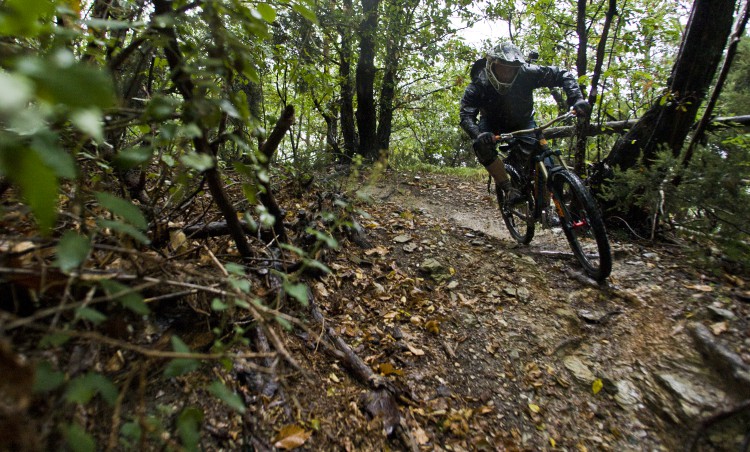 The trails were wet and muddy later into the day, so we had a broad range of conditions to ride on. 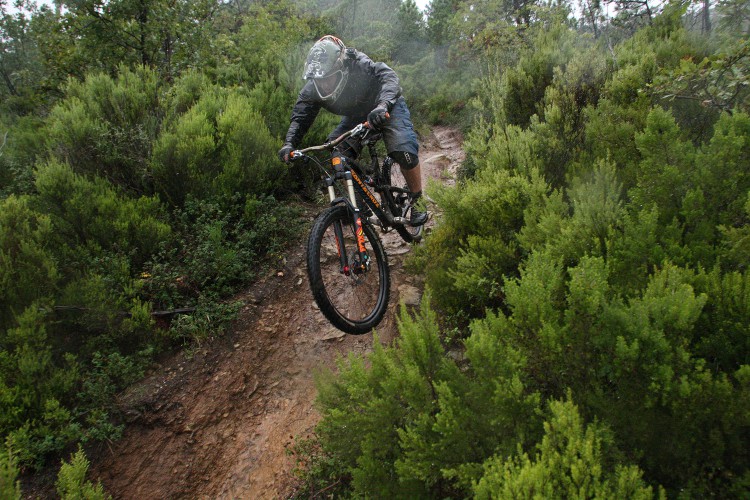 Finale Ligure is ideal as the trails are some of the hardest most Enduro/Trail riders will come across, so ideal for comparative extreme testing.

If we were to pick the most notable change, we would say it was the mid travel support. We ride the VPP suspension system frequently and are used to how it feels and responds, the tuning of these new components made a perceptible improvement to how we rode the bike. In easy to describe terms we would say that the improved mid travel support meant a more consistent ride feeling and greater traction in the situations we rode in. We knew where we were on the trail and what the bike was doing at each point, more than with the non RAD components.

Our null hypothesis was that there would be no change or improvement in the suspension feel and ride. We can safely say that over the riding time we had that it’s not true. The increase in our performance on the bike especially on what could be considered a more flexible fork chassis was impressive. We would say that if this version of the cartridge makes it into production, the end consumer is going to notice the difference compared to previous years models. Although we couldn’t fault the 36 and Float X for their performance out on the trail at the time, there is no doubt the whole point of the Racing Applications Development program is to generate incremental improvements in products which might eventually reach the end consumer, in this case the new 34 FIT cartridge.

With our participation it seems we have the ability to look ahead a bit and see what is coming. Yes suspension performance is always getting better and yes the new 34 FIT cartridge is probably going to be another landmark product.