Once the dust settles and Rampage wraps up each year, we take a bit of time to run through photos and stitch up some sequences in an attempt to show the scale and savagery of the event with a medium that meets part way between a single frame photo and a video. If there’s one common theme about the event, it’s that people who attend will tell you that nothing does it justice. Hopefully these photos provide a bit more context…Enjoy! 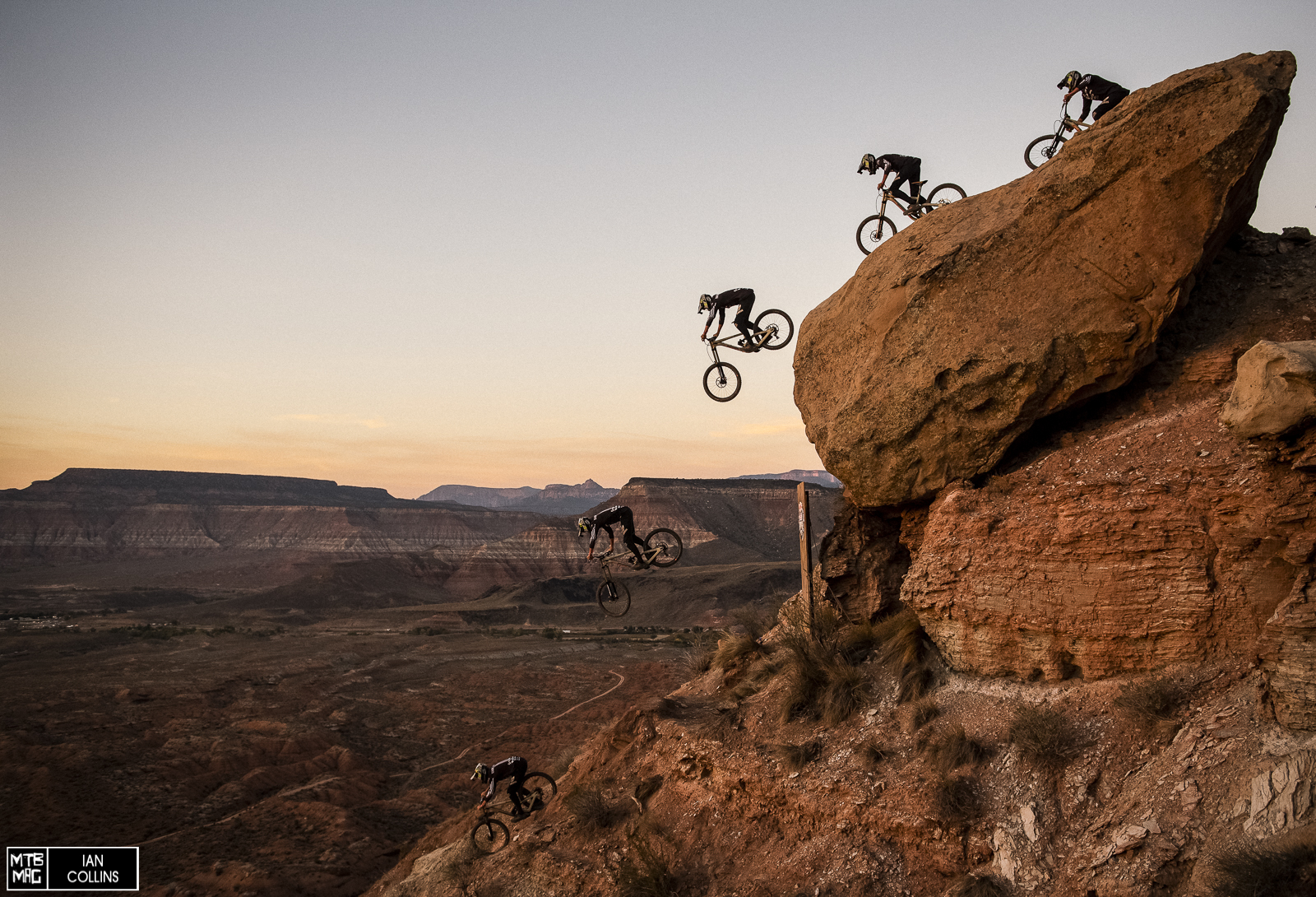 Since everyone thinks that Brendog got robbed, we’ll start with him…Here’s a stitch of “The Rock”. He rolled up onto the rock, turned hard right part way and then dropped deep. 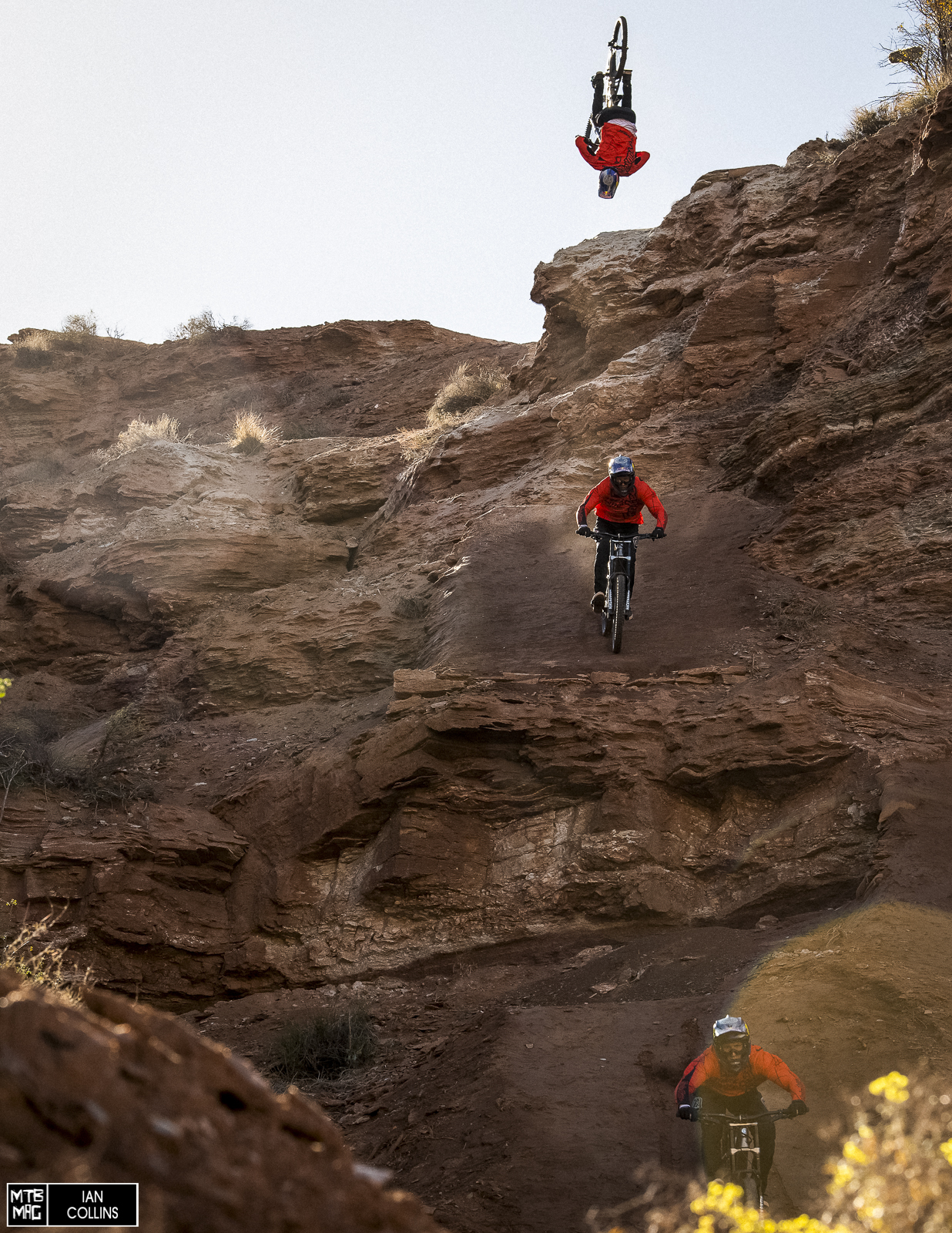 Brandon Semenuk didn’t have the run he wanted in the finals, but in practice, he greased an insane flat drop flip into a double drop. The run in was super tech and narrow, shared with T-Mac’s big drop. 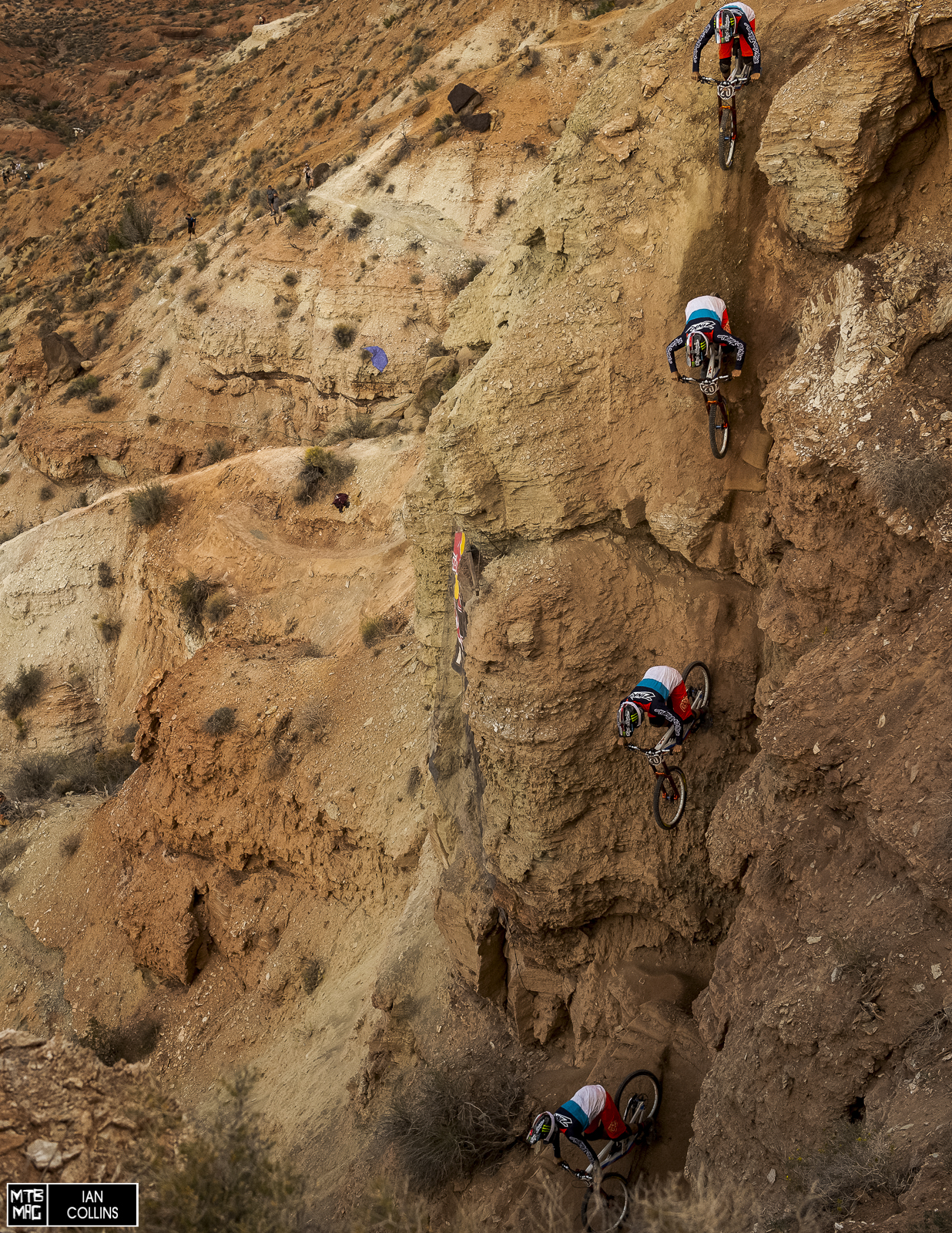 Cam Zink and Kyle Strait had an upper/mid-mountain chute that was out on the end of a ridge and super exposed. It had a hard left turn on the run in and a hard right at the exit. It was no easy task. 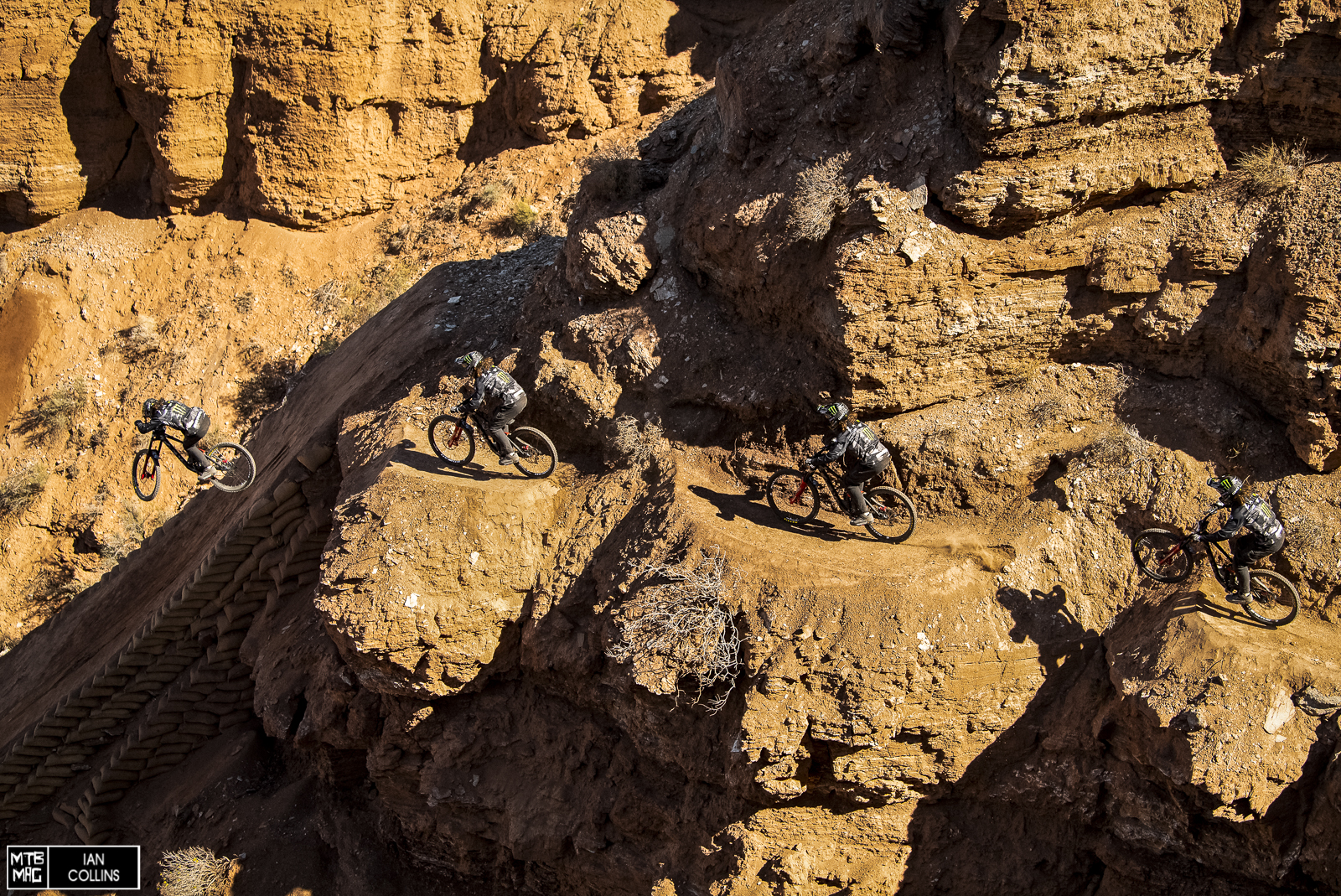 Aggy made a point to just have fun at Rampage this year and not send it too hard. He’s had some tough breaks there in the past, and considering he just got back from a string of injury, we think he played his cards right. Here he is popping onto his double lilypad feature and hipping onto the landing of the huge drop that Silva, Sorge, Nell and TVS shared. 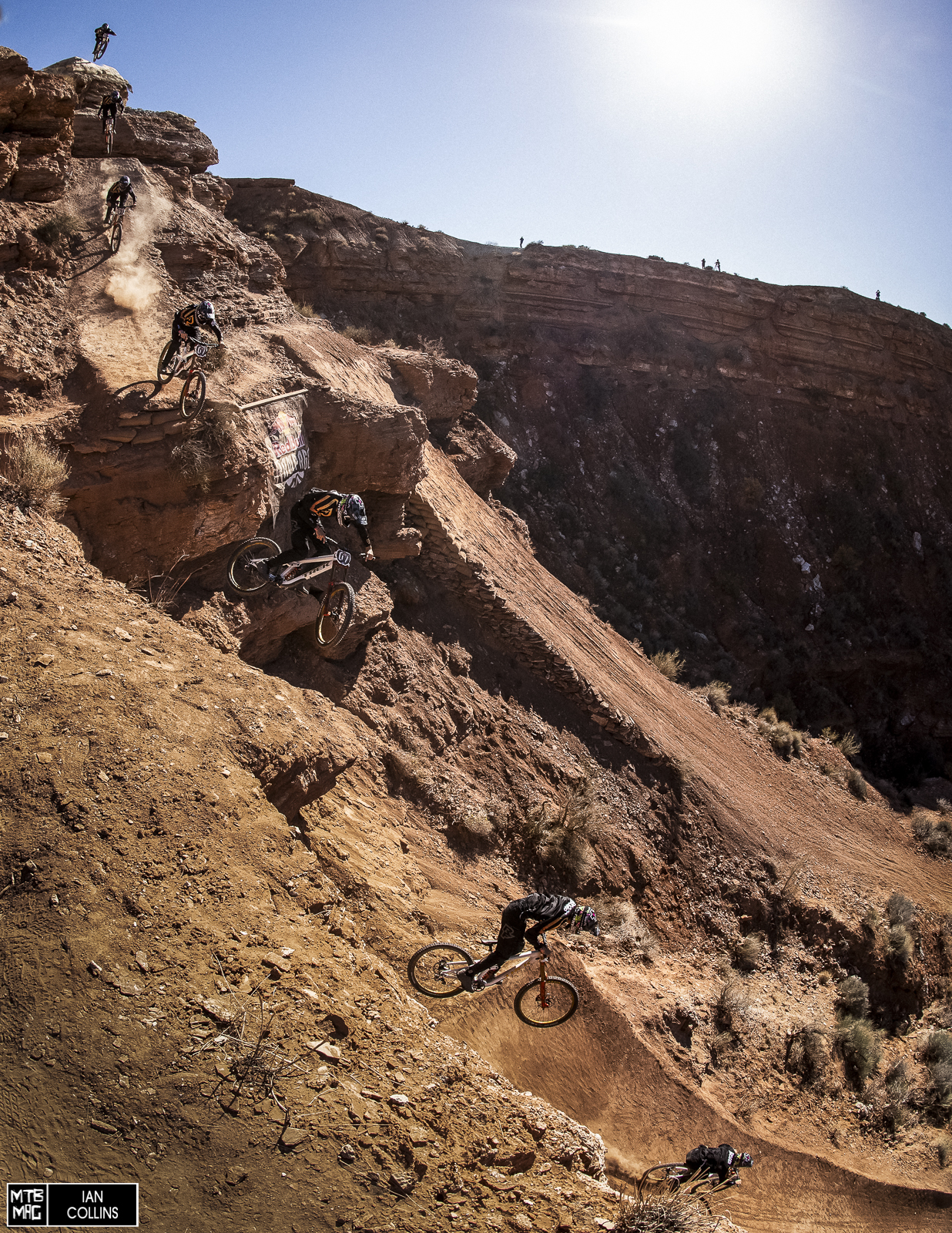 Speaking of double drops – they were everywhere on the hill. Some riders even had two in their line. Reed Boggs had a pretty good sized one at the bottom of his run. This one had a blind take off and a hipped exit. A complete bike control freak, Reed greased it no problem. 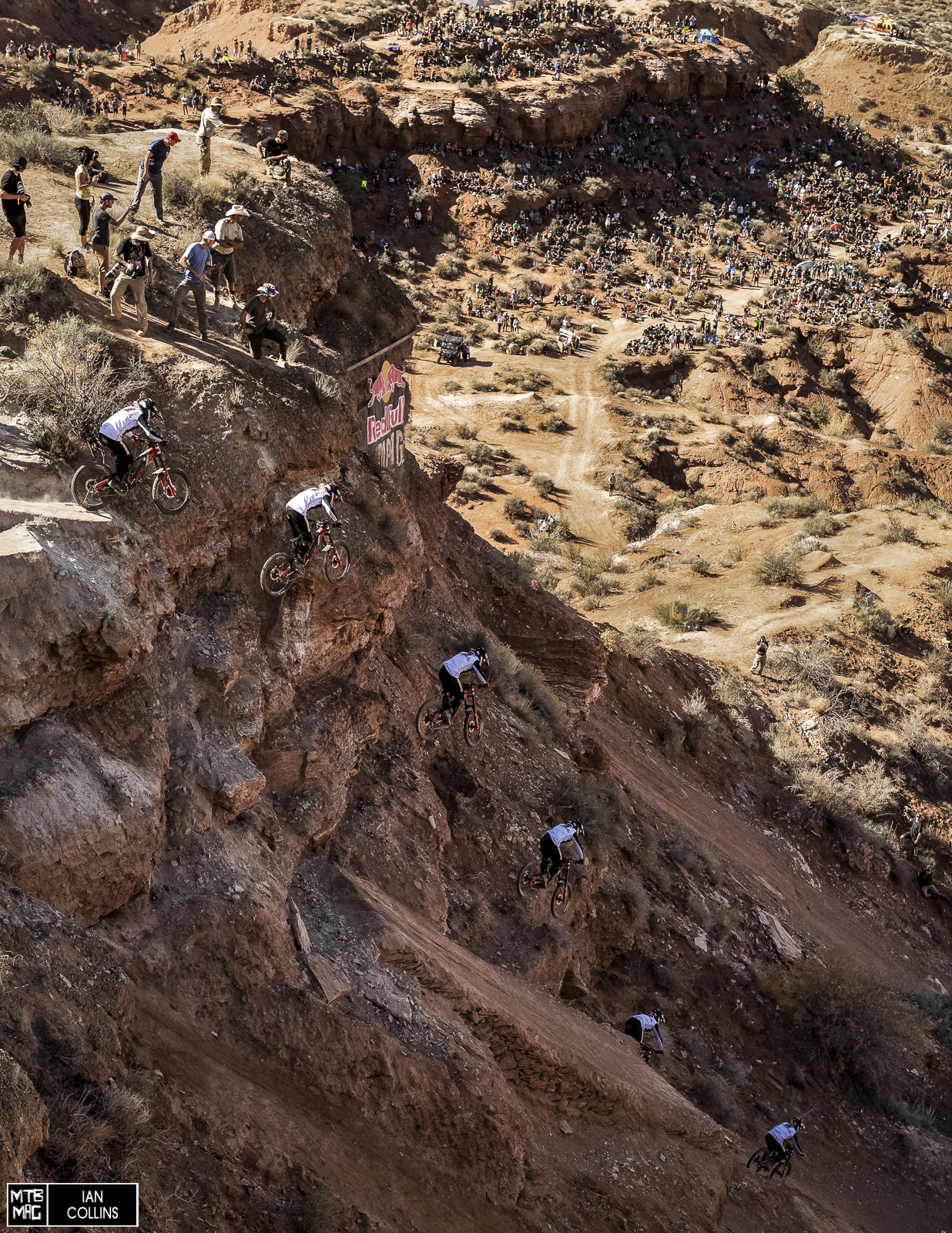 It was unanimous that Tyler McCaul had the biggest, most technical drop on the hill. he didn’t end up tricking it, but that’s irrelevant. Tip-to-tip, it measured longer than the drop that Tom Van Steenbergen flipped, winning best trick. It had a downhill take off going very close to a rock mid air (on the left, second frame abovce) with a very snipey landing. Gnarly. 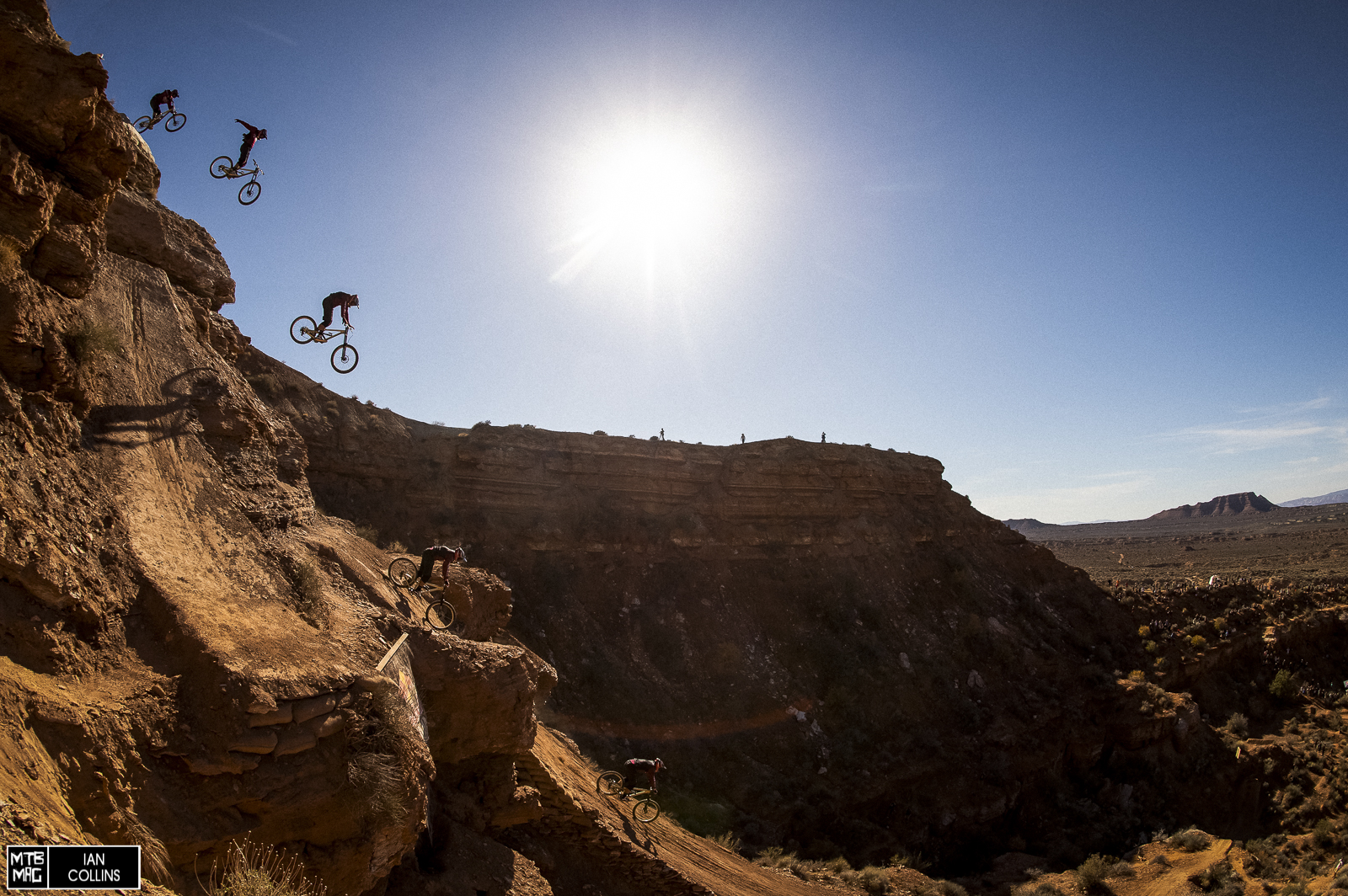 Kyle Strait went HUGE at the bottom of the hill on his last drop. He was supposed to share it with Cam Zink, but Zink hurt his shoulder…AGAIN. In any case – on the first run Kyle’s bars turned in mid air. On the second run, they stayed straight and he leaned way deep into his suicide no-hander. 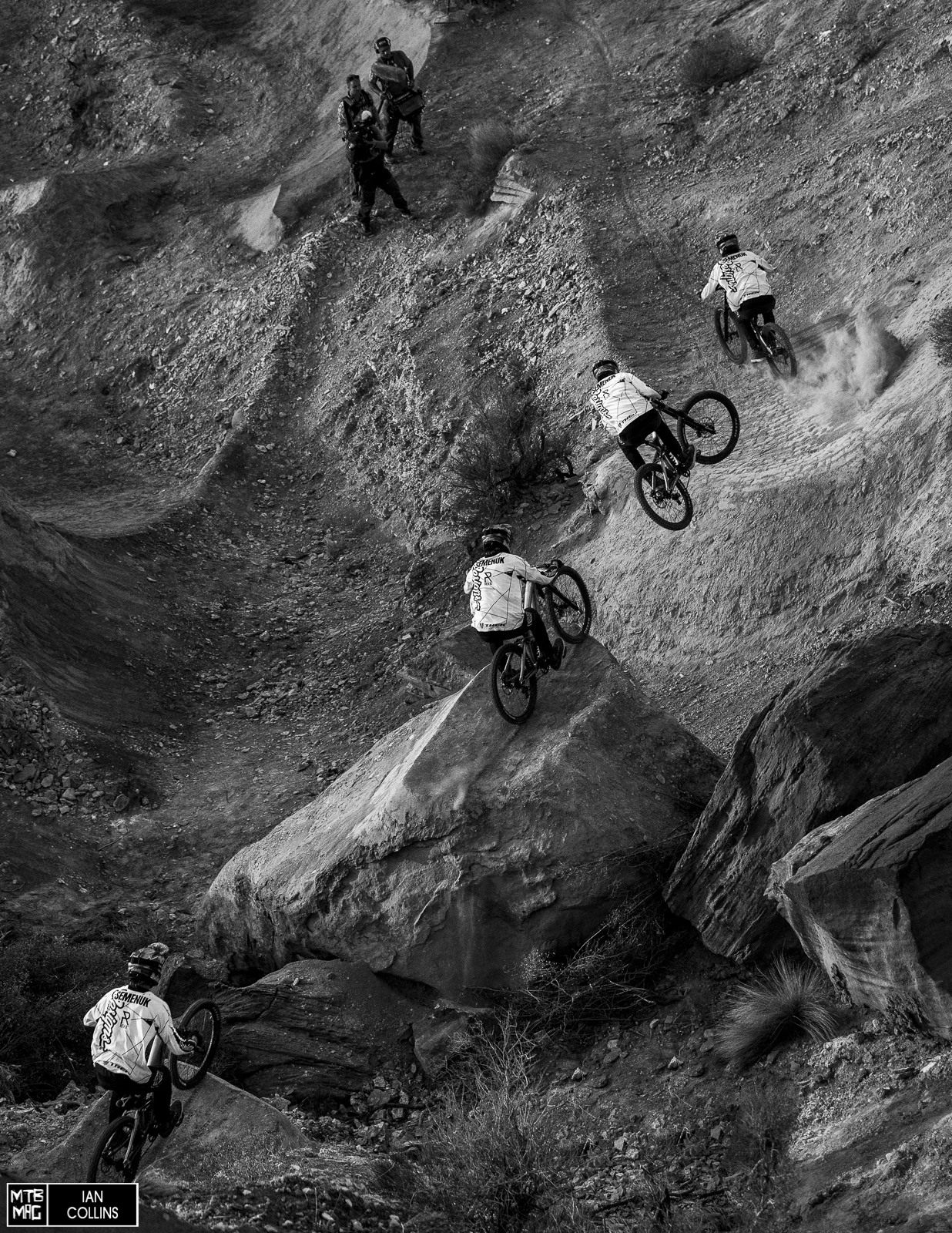 Brandon Semenuk found the most creative way through the most chaotic section at the top of the hill. In a section where about 9 riders intersected, Brandon popped onto a rock pad that was about +/- one foot on each end of the bike, then hipped out. 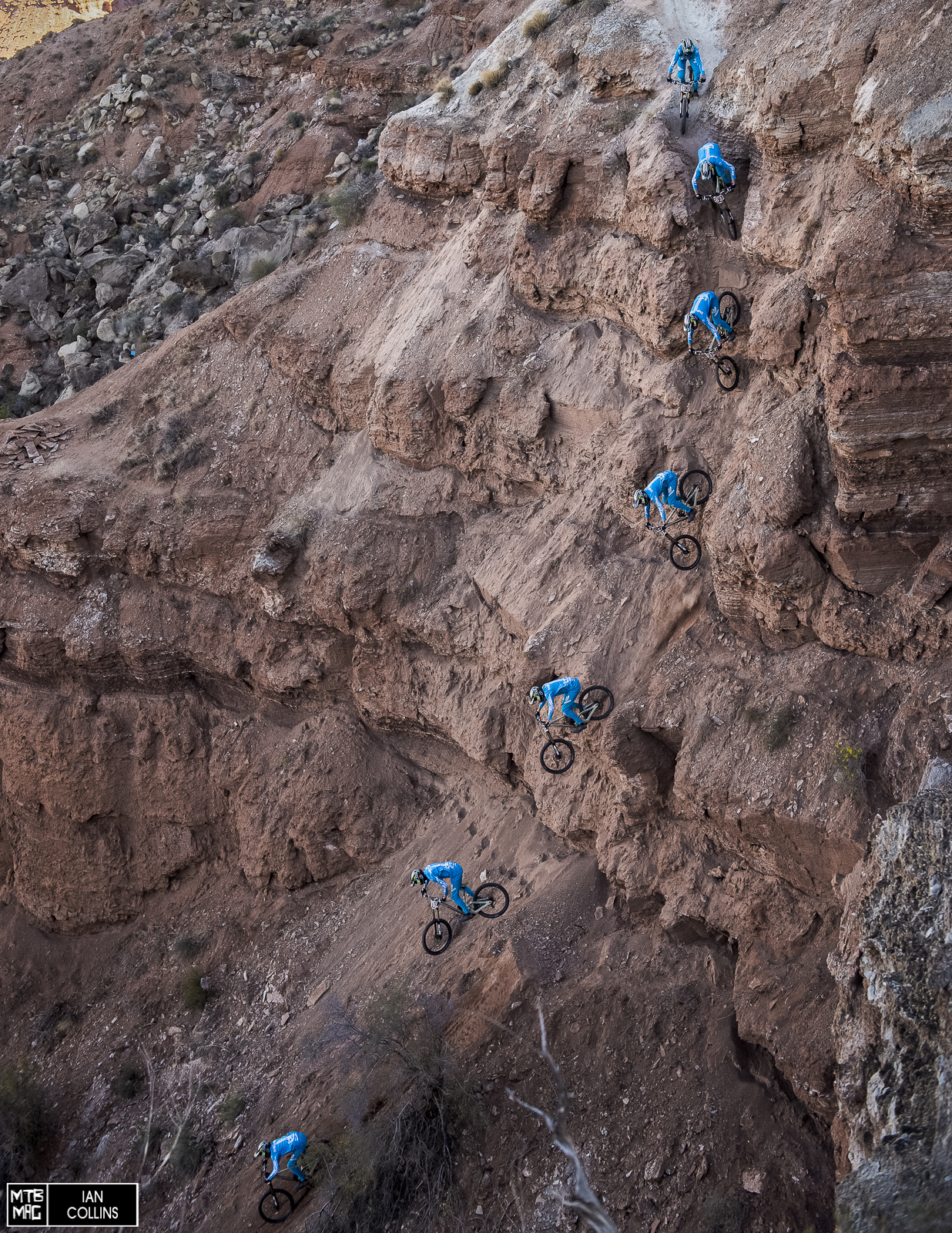 Brendog’s chute was pretty darn raw. While a great deal of riders padded their steep bits with loads of sandbags and wet dirt, Bren left his rough as guts. He greased it a half dozen times in practice, making it look like child’s play. Finals was no different. 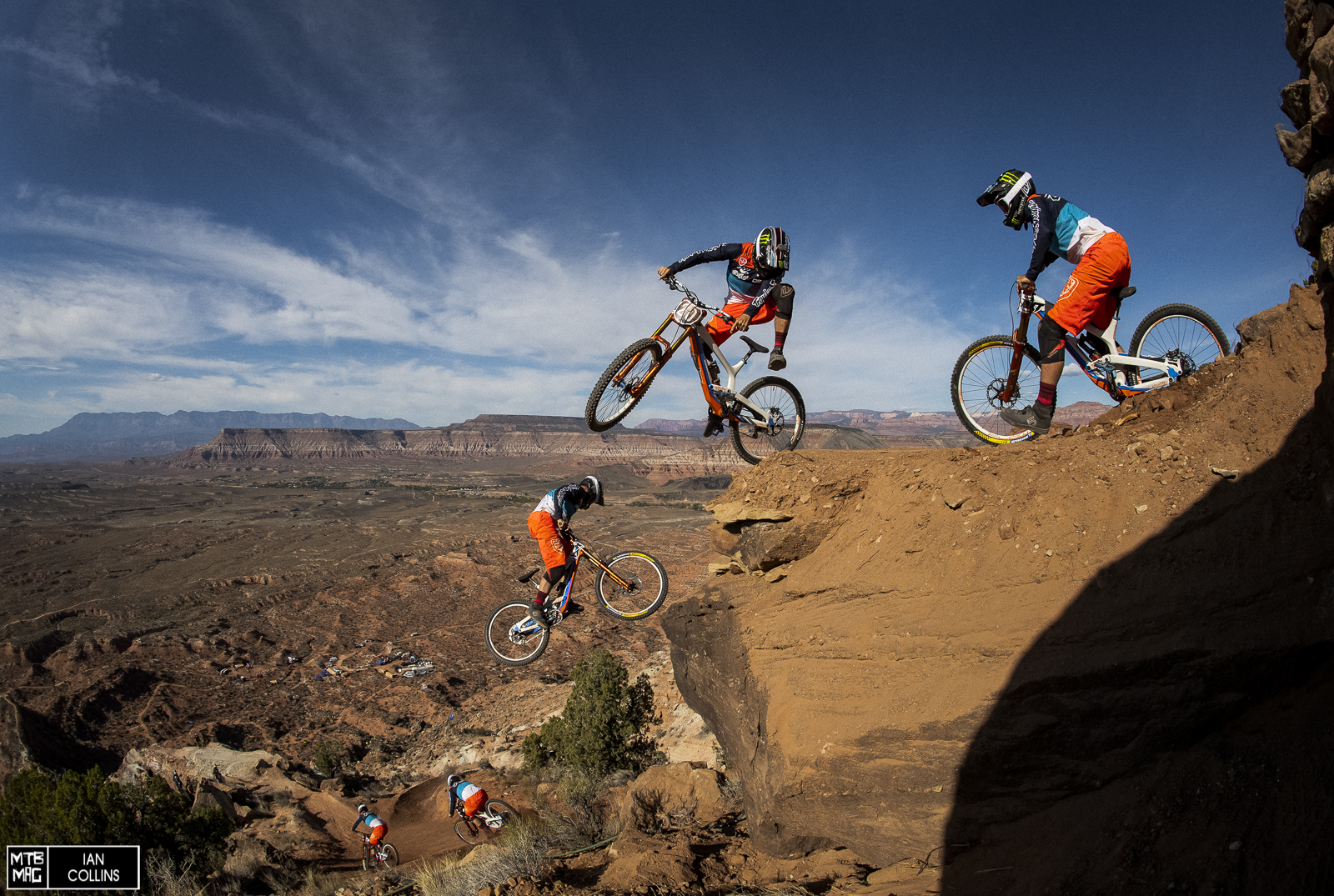 Unfortunately, Cam Zink got hurt, but we got a chance to snag a shot of him doing a fastplant 360 off of the start gate drop. He had to re-tune the exit in order to get his foot down, but he got the trick done, despite a deep send and a mild over-rotation. 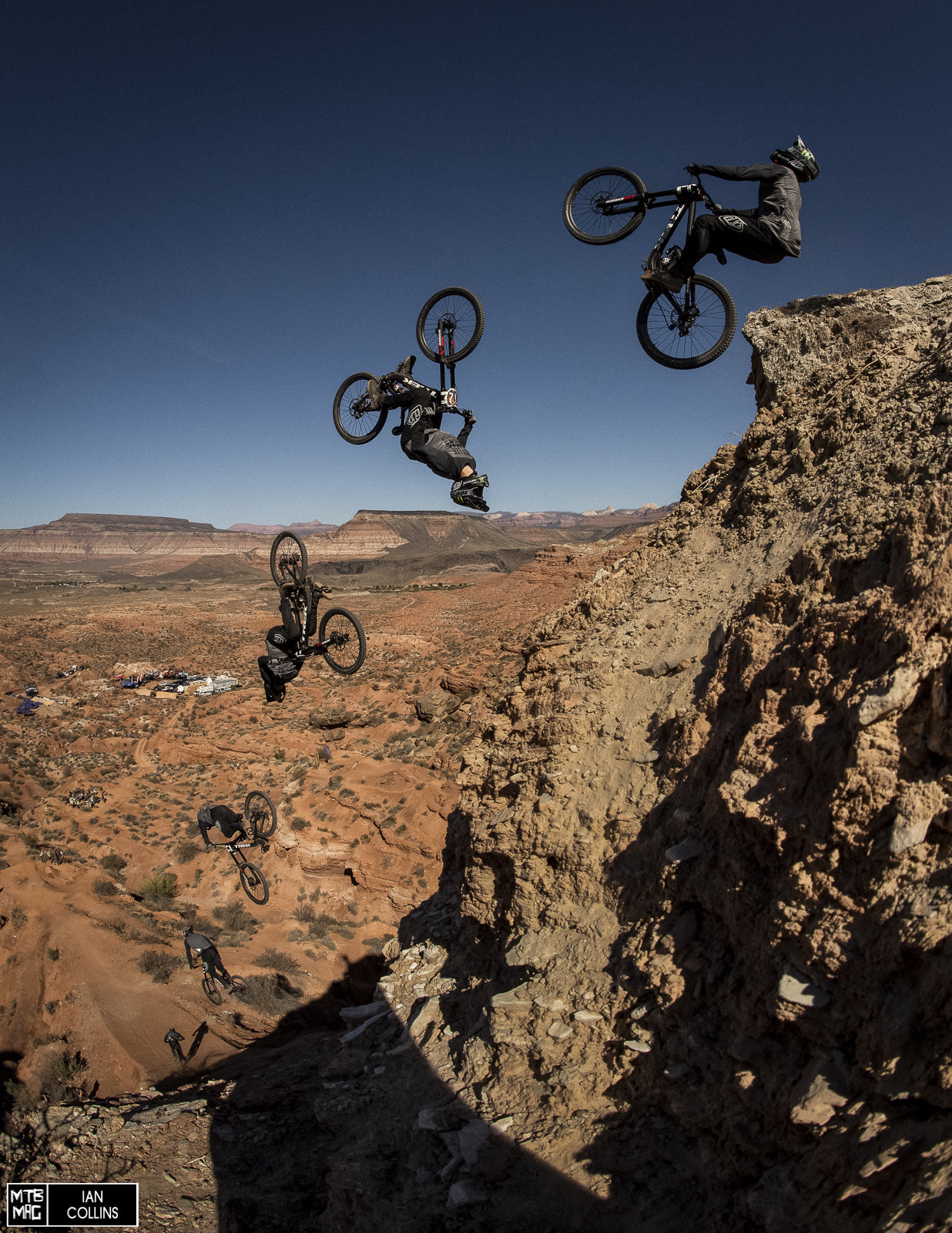 Tom Van Steenbergen deservedly won best trick with this massive flat drop flip. He sent it super deep, over rotated and landed so hard that his goggles slid down over his nose. He somehow rode it out like a boss though. 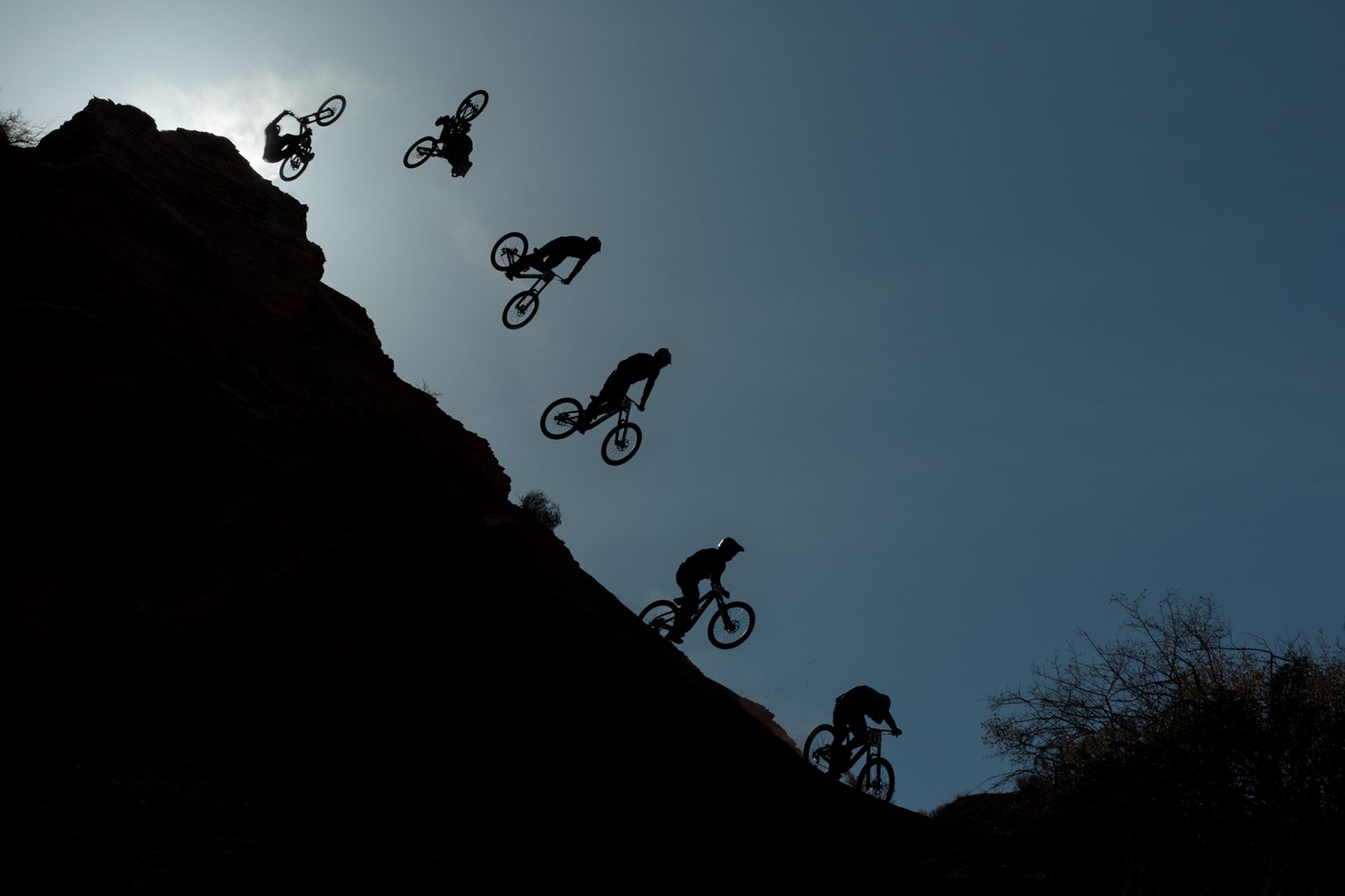 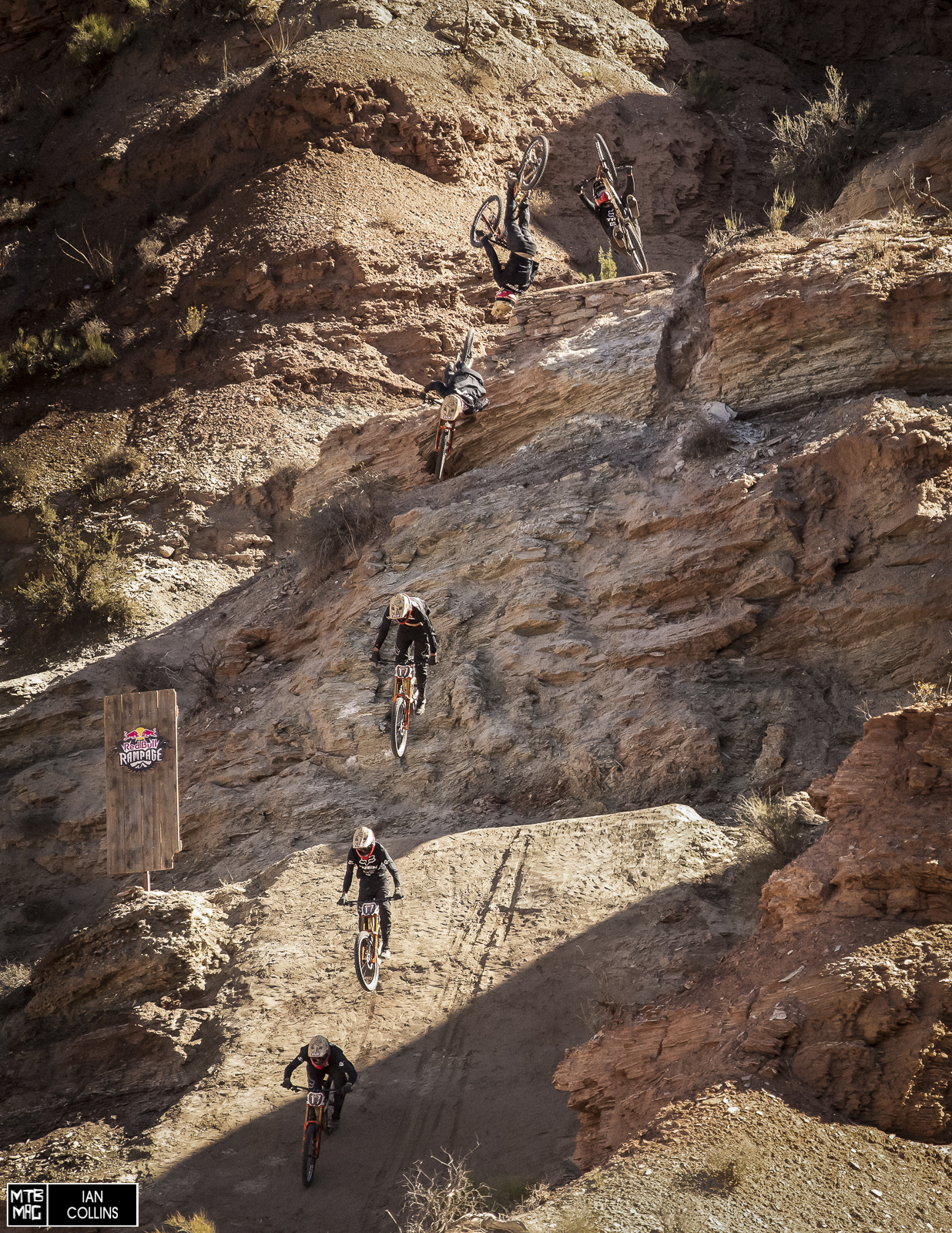 Last, but certainly not least, Brett Rheeder’s flat drop flip…It wasn’t quite as big and exposed as TVS’s, but Brett was a bit corked out and the rest of his run was completely savage.