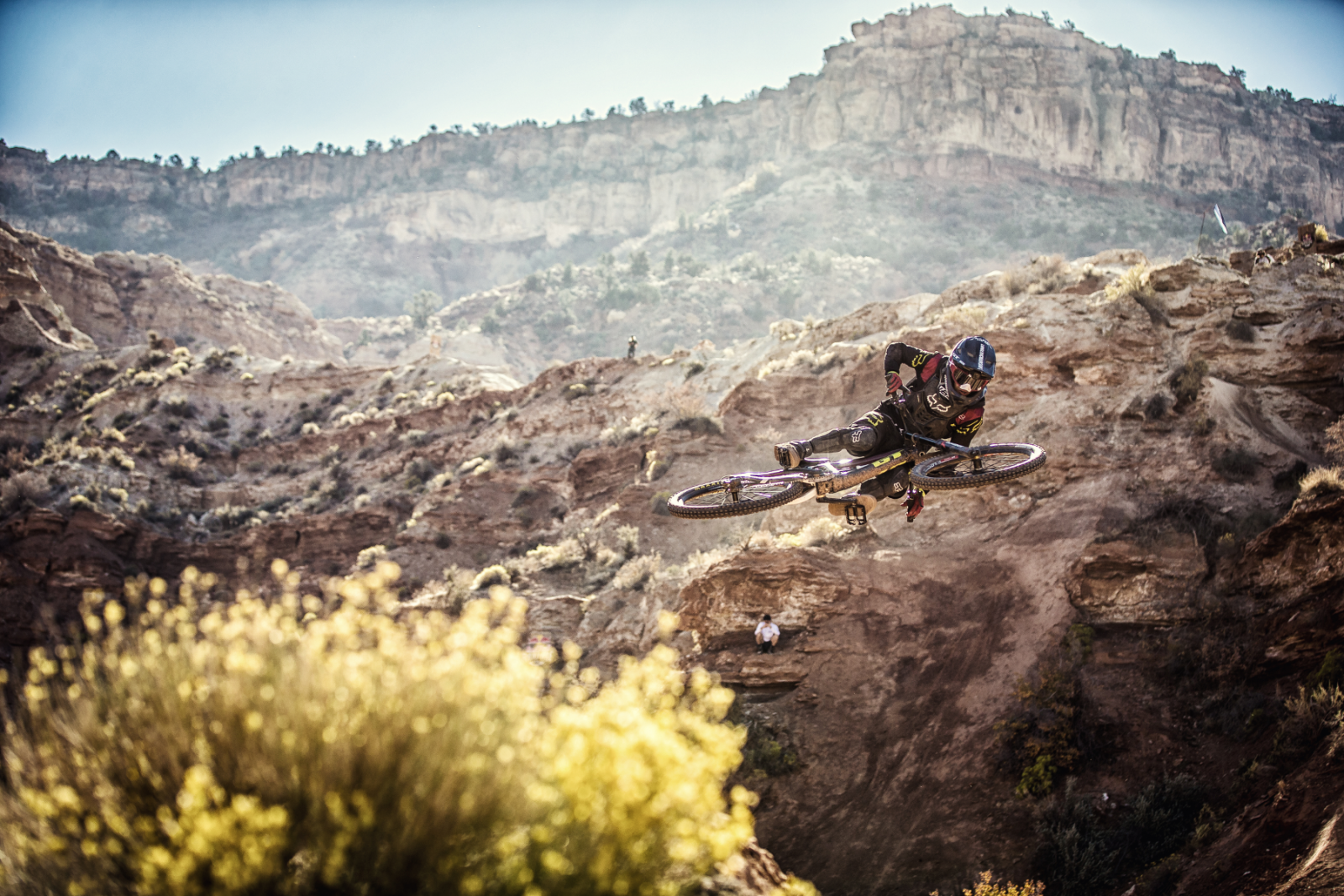 Find an in depth interview from GT Bicycles with their athlete Tyler McCaul Below! 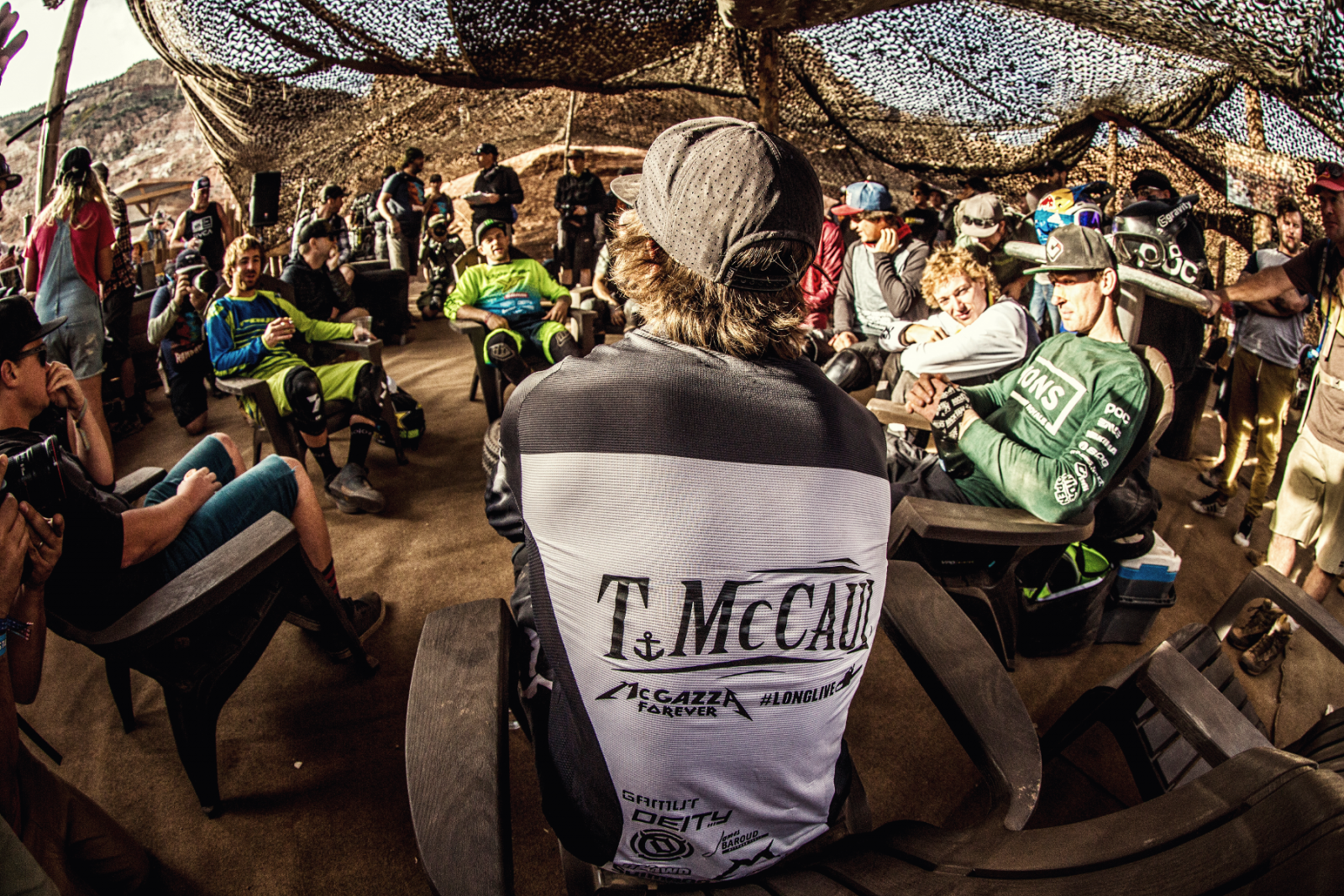 Who is on your build team this year?
I’ve had the same dig crew since 2015 and they’re back again with me this year. Alex Reveles and Tom Ghelli. Tom actually dug for me back in 2013. He was the GT Demo truck driver at the time and I didn’t know much about him. He offered to dig for me that year, and he ended up being one of the hardest working dudes I’ve ever met. He used to be a Mason, so he’s our master rock stacker and can sling dirt like no other. He also doubles as my mechanic and our master chef too. Bacon wrapped pork tenderloins for breakfast are his specialty. Alex is one of my best friends and I’ve been riding with him since back in the Aptos Post Office days. He used to dig for my brother, Cam, but after Cam’s last year competing in 2013 I swooped Alex up as soon as I could. He’s built a lot of things over the years and works smarter not harder. He keeps me safe, and makes sure nothing we build is preposterously stupid. He’s also the best at visualizing speed for jumps and drops, so he helps with all my speed-checks while I’m testing my line out. 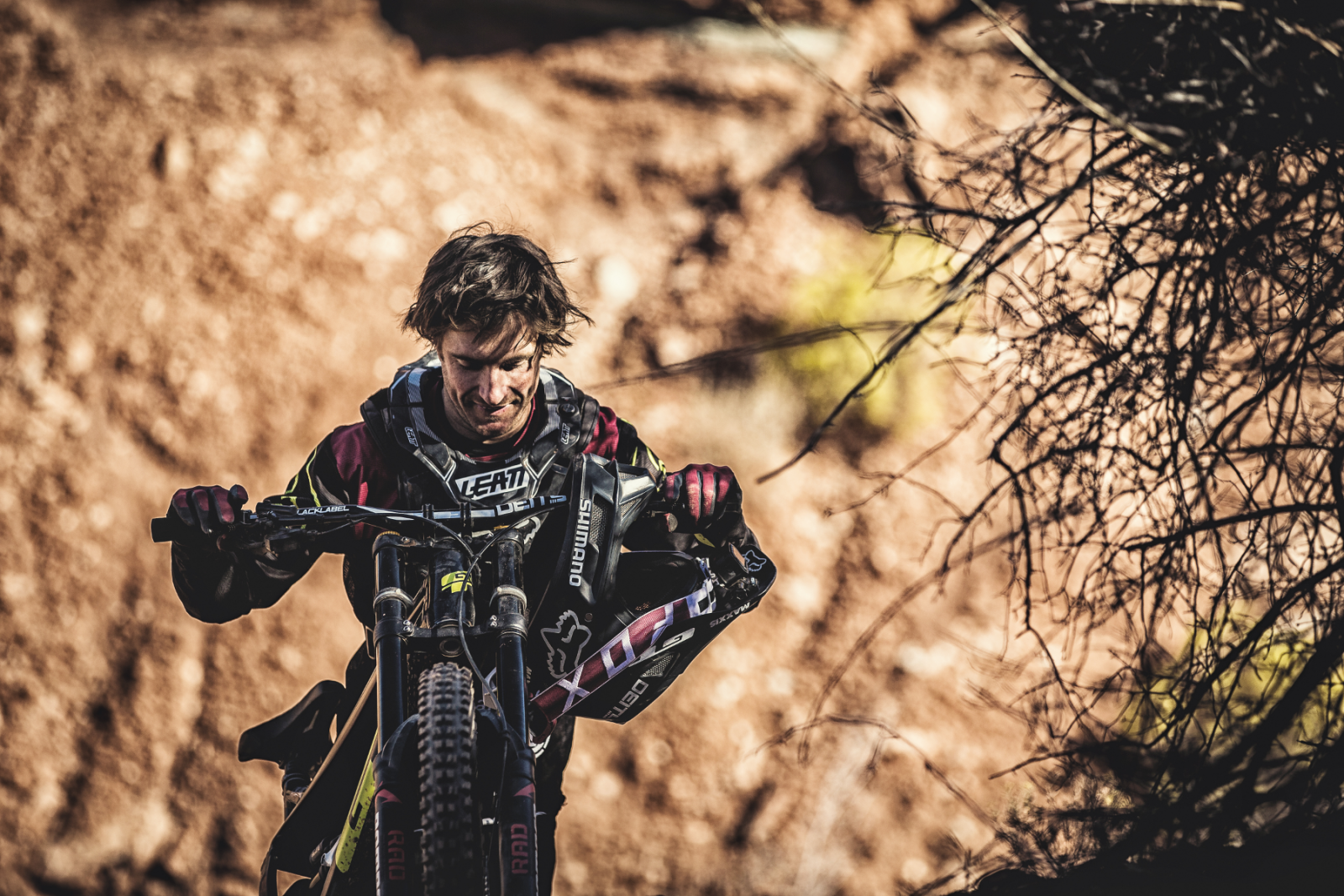 How will your Fury be set up?
I’m rocking the new Fury this year, and it’s taken some getting used to but I’ve been loving it. The new suspension platform feels like it’s capable of taking big hits A LOT better, and I’m looking forward to seeing what I can take it off this year. I set my suspension up stiff and slowww, and I run 2.7 Maxxis Minion DHF’s front and rear. Utah’s the only place that I run 2.7’s instead of 2.5’s, and I feel like having a wider footprint and higher volume tire just works better out there.
Other than that, Fox made me a custom rear shock that has a longer eye to eye length but maintains the same stroke. That allows me to run 26″ wheels front and rear, but brings my BB back up to a normal height. It steepens the head angle a bit, but then I run a 27.5″ specific Marzocchi 58 front fork that levels things back out. The geometry remains pretty much identical to the stock setup with 27.5’s, but with 26’s. Reason for me riding 26’s: I’m short, and I need the extra clearance to keep my butt from hitting the rear tire when I pull back to flip off big stepdowns with little take off’s. 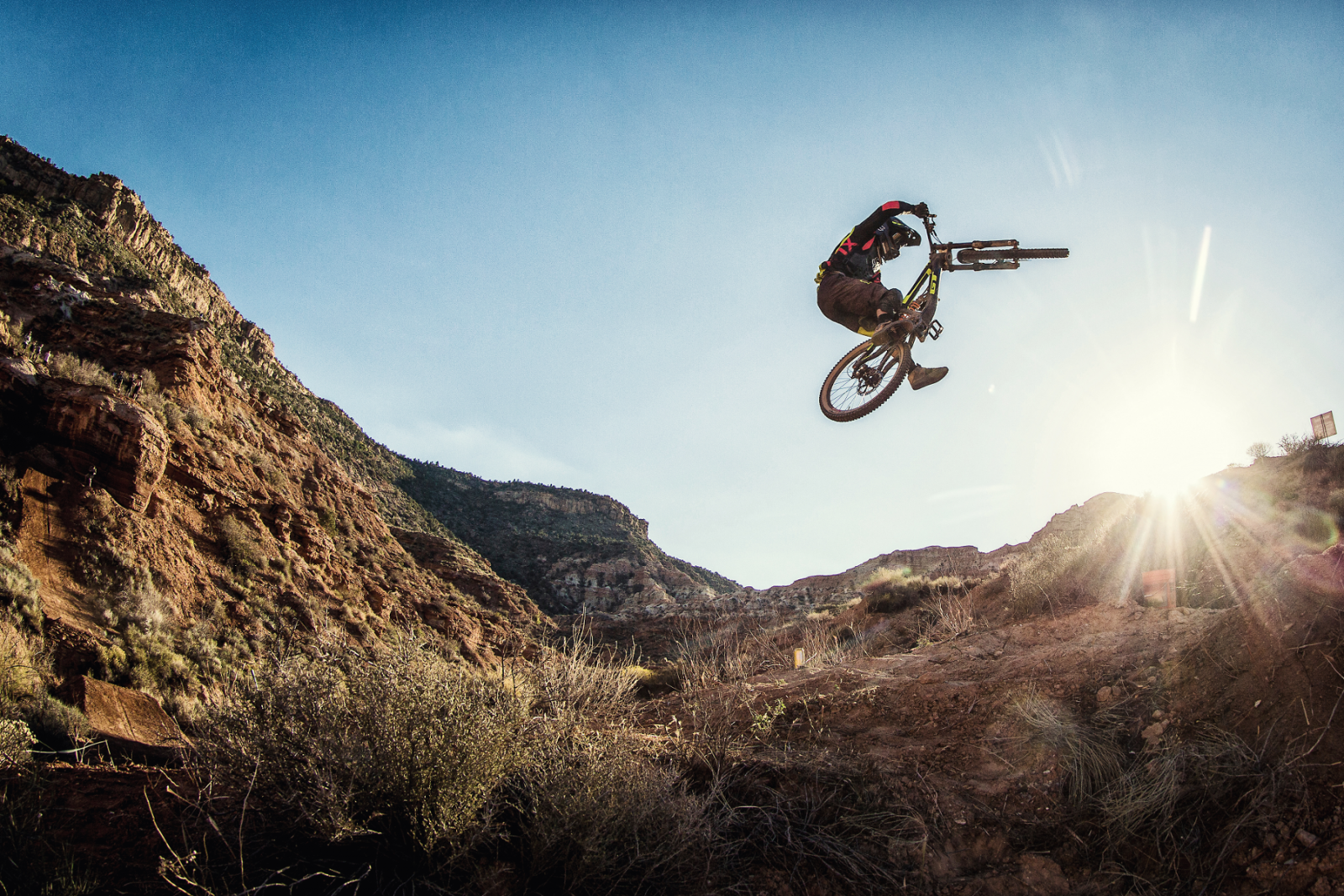 How do you prepare for Rampage? Does your daily and weekly routine change in order to be physically and mentally ready?
For sure. Mentally, once Crankworx Whistler is over, Rampage is all I think about and I try to spend every day doing as much as I can to prepare. This year has been a bit different. I’ve been losing a lot of riding spots in my hometown of Aptos, CA as of late, and there isn’t a whole lot to ride here as of now. A couple weeks ago I road-tripped out to Utah to just ride for about a week and a half and that was awesome. When I’m home I do a lot of off-the-bike training. It’s something I’ve been getting more into in the last few years, and I feel that it’s something that really helps my riding while I’m out in Utah. I go to a local athlete-based gym in Santa Cruz called Paradigm Sport. The owner, Joey Wolfe trains me there on his own time and beats the living sh!it out of me. Training is something I’ve grown to like more and more over the years, and I figure the more I suffer in there, the less I’ll suffer out in Utah. How has your approach to the event changed from the first time you competed compared to now?
The first time I competed I didn’t know what to expect, I had never even ridden in that kind of terrain. I was pretty relaxed going into it and really didn’t have any expectations. I figured I’d just pull out of the competition if I wasn’t feeling it. Once I hit the first drop out there though I was hooked. I ended up qualifying 5th I think and was fired up. I didn’t think I’d ever make it to finals. I ended up crashing on the last feature in my 2nd finals run, the big stepdown hip to dirt quarter thing that Gee hit and got 3rd with that year. I think I would’ve ended up somewhere in the top 5 that year if I hadn’t washed out. From then on, I’ve taken the event more seriously. Part of me misses the mindset I had in 2010 where I really didn’t have any stress or any expectations. Now I take it pretty seriously, and I just want to do the best that I can every year. At the same time though, I just want to have fun with it and do what I know I’m capable of. If I back down from something that I know I should’ve done, that’s when I’m bummed once the event is over.

It’s a long two weeks, from building to practicing to competing. How do you stay composed throughout the week? Do you even get any sleep?!.
I think having that much time to wrap your head around everything is only beneficial. You pick your line on day 1, but then you have 5 days to dig on it, look at it, and prepare yourself to ride it. We’re not even allowed to ride on those days. Then you have 4 days to slowly start testing stuff. It helps you run through all the scenarios and come up with a game plan. Usually, though, you’re digging until the last second and have to test everything on the last day of practice, ha ha. But at least by then, you should be pretty ready to hit everything. As far as sleep. I’m usually so exhausted from digging all day that I don’t have any trouble sleeping. There have been a couple times though that I’ve been stuck awake dwelling over things I’m afraid of, but I try to just not let my mind go there.

It’s finals morning. How does your day start and go from there? Who is making you breakfast? And what are they making you?!
Alex usually wakes up a little earlier, gets a pot of coffee goin’ and loads the truck up. We’re usually out of the house well before sunrise and get to the venue as the sun’s about to come up. They have catered breakfast for us at the venue the morning of finals, so I try to get some food down and then pad up and try to get a little bit of riding in before our mandatory riders meeting at 9 am. I’m usually last to the meeting every year, and the past two years I’ve gotten stuck at the top of the course unable to ride down cause it’s too windy. It seems to always be windy at sunrise on the morning of finals for some reason, and that’s a bit of a mind f*%k cause you never really know if it’s going to die down or not. After our meeting, we hike to the top of the course, hope the wind progressively dies down, and wait our turn to drop in.

What’s going through your mind when you are sitting under the starting arch at the top of the mesa?
It’s a little different every year depending on the line you have picked out and what you’re planning on doing on it. I’d say the number one thing I think about is wind. I’m checking all the flags placed around the hill to see which ones are moving and where the wind is coming from. Sometimes you can lean into it a bit, but usually if it’s too windy you’re just f*%ked. That’s usually the struggle. You want to drop in cause at that point you and your crew have put so much work in, but at the end of the day if it’s too windy then you have to be willing to walk away. It’s always hard knowing where to draw the line. 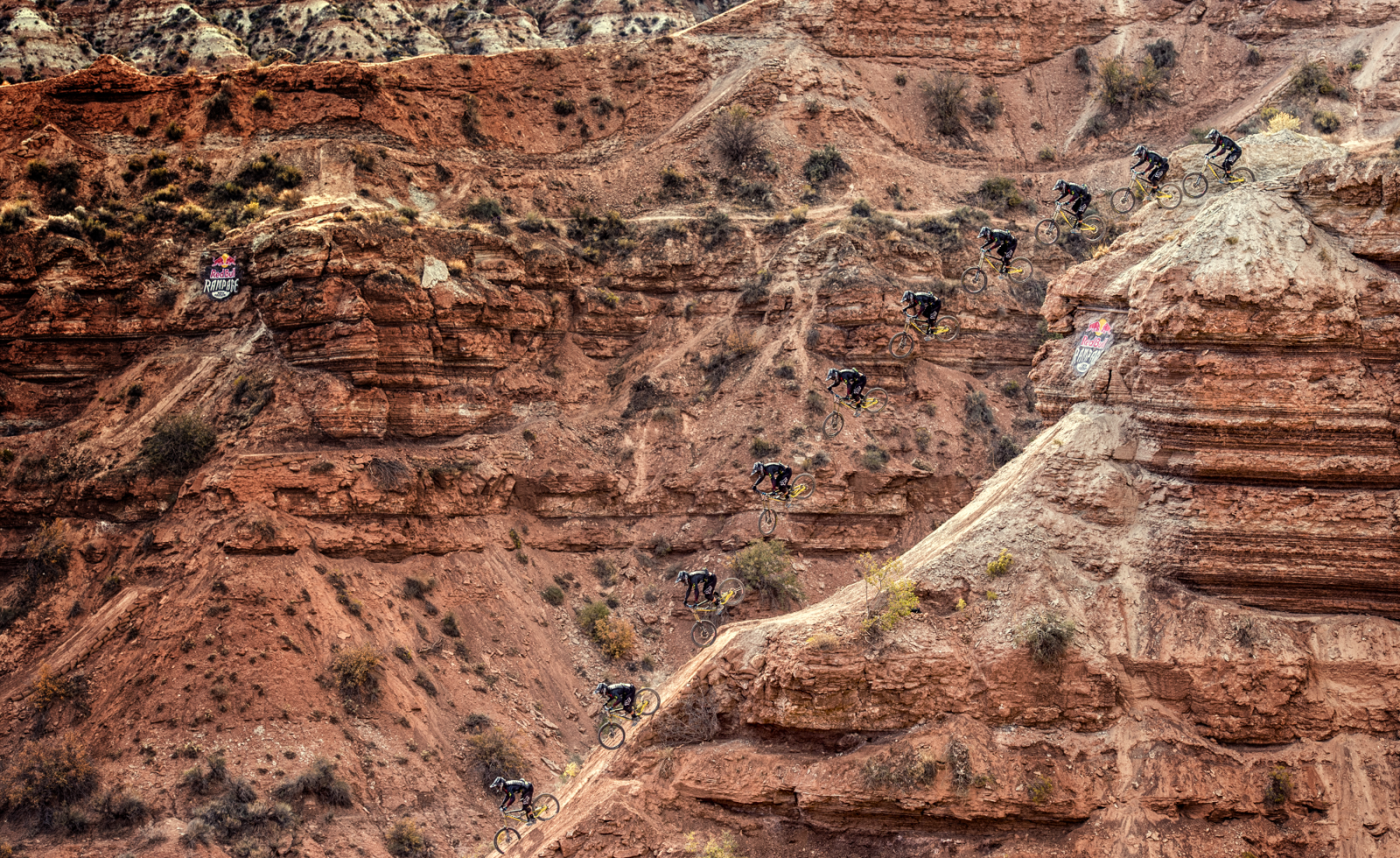 What is it about Rampage that makes you want to go back year after year?
I’ve never been able to put my finger on it, but it’s just something that I’m really passionate about. It’s a test of will power and dedication, and I’ve never experienced anything more satisfying than conquering that hill and walking away healthy and happy. It’s also a huge thing for our sport and reaches a much wider audience than a lot of other MTB events. I think a lot of us riders take it upon ourselves to help push our sport the best we can and bring awareness to big mountain freeriding, and MTB as a whole. It’s all relatable in a way, and I think everyone that has ever thrown a leg over a bike can in some way relate to that feeling we get when we ride that stuff.

What has been your personal favorite Rampage moment?
Hard to say, but in 2015 we built a pretty big drop and the landing was a HUGE build. A lot of people thought we were dumb for trying to tackle such a big job and were certain that we’d run out of time before we finished it. Once we finished it though and I got to hit it for the first time the night before qualifying, I’d say that was one of my favorite moments.

Do you want to give us any clues about what you are planning on pulling off this year?
Well, we have a new venue this year so I’m not too sure what to expect. We’ll have to wait and see!