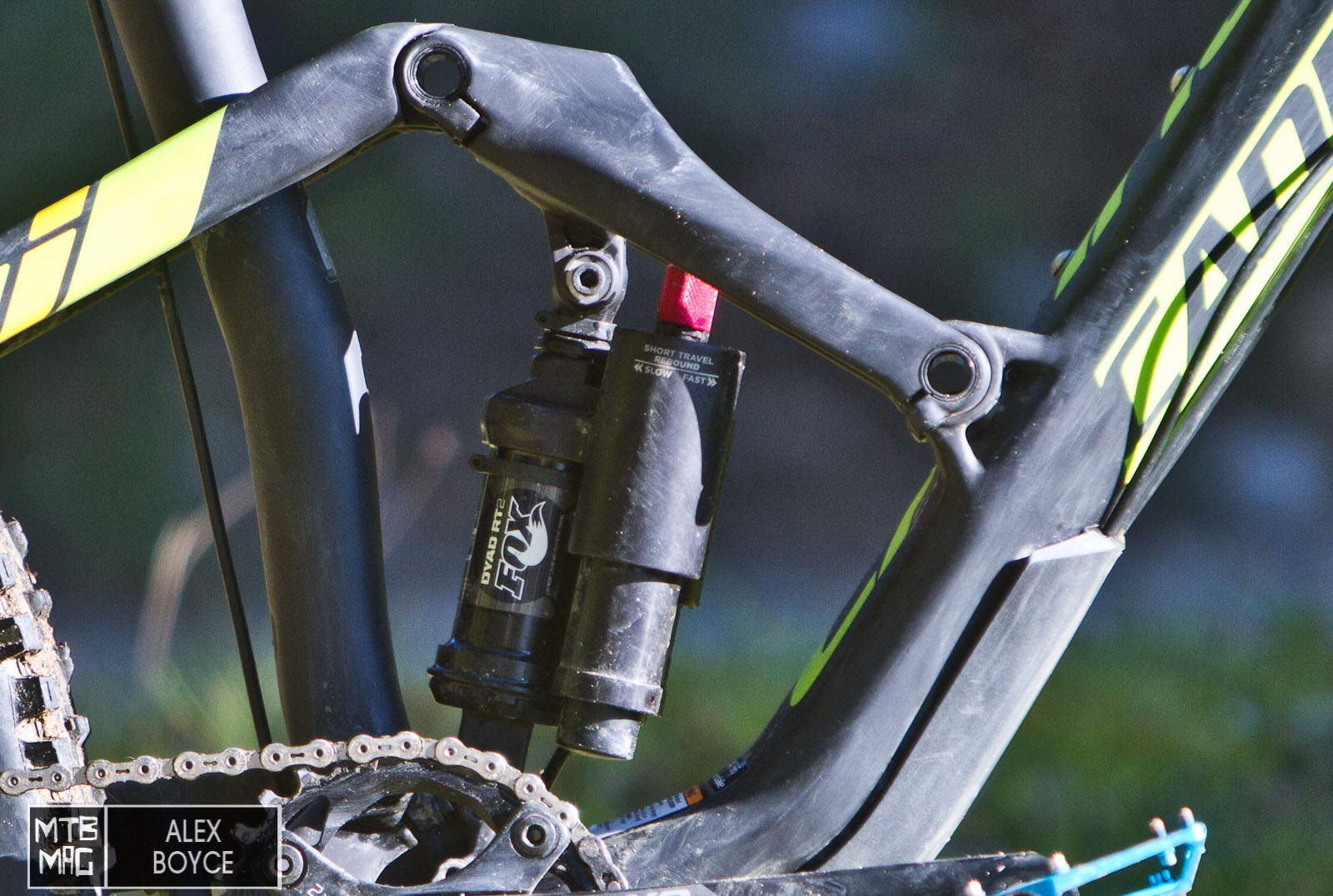 Cannondale with their Jekyll offering have bucked the trend when it comes to suspension. A pull shock and a lefty fork is about as different as it gets. Jerome Clementz the 2013 Enduro World Series champion was instrumental in the development of the bike and the performance of the suspension system. Jerome uses a Rockshox pike up front and the Fox DYAD pull shock on the rear, a unique set-up. As we have the Jekyll on test with this unique shock we thought it pertinent to ask for set up advice and find out what the 2013 world champion does with his shock. 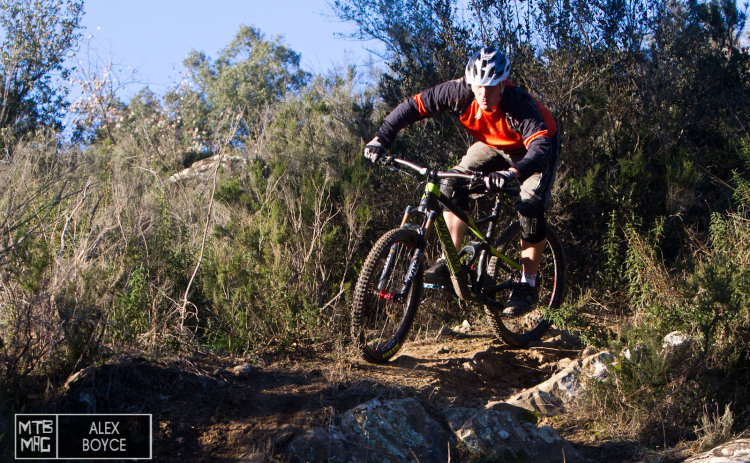 Testing the set-up of the DYAD RT2 Shock 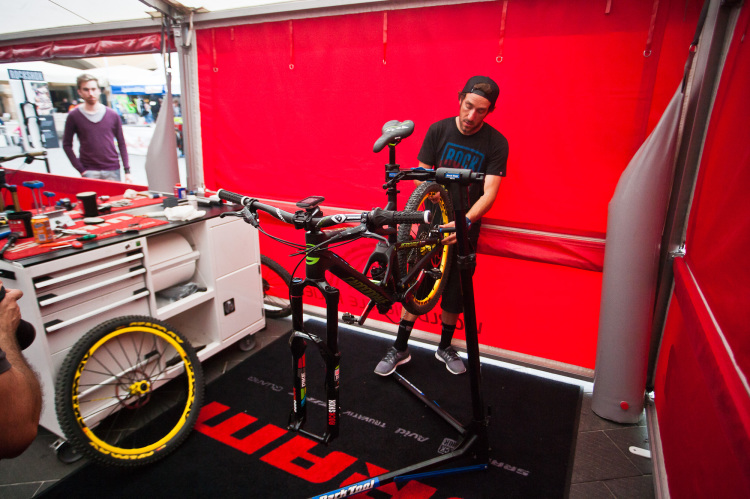 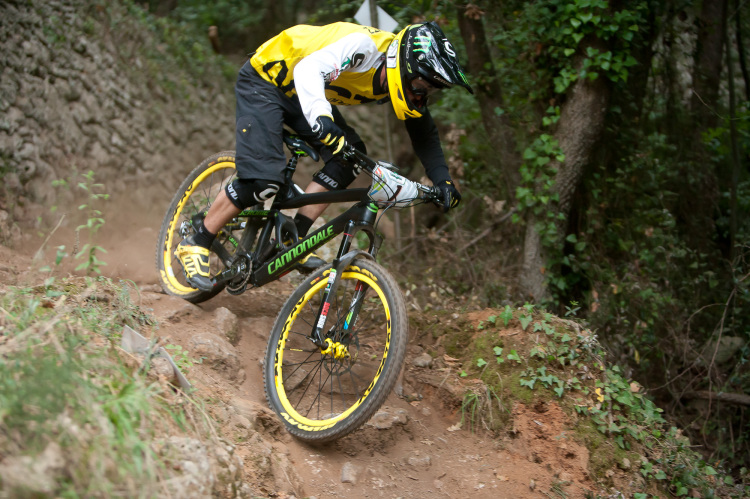 The shock is probably locked out at this point after a fast pedal section, with a quick twist of the left hand he can un-lock it..

We put a range of questions to Jerome to find out what he does with his pull shock system. 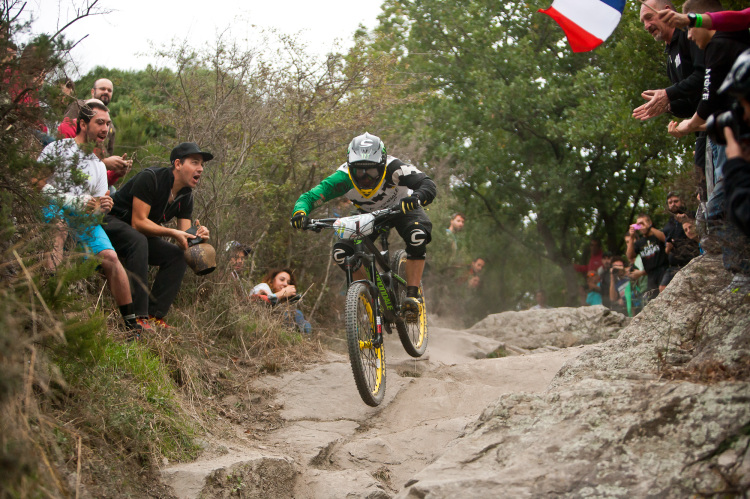 A fast rebound and open long travel option suits at this point in time.

With the pull shock system on the JKL what is your baseline suspension setup for racing, what are you looking to start from with sag and rebound?

Normal SAG for the Jekyll should be 18mm, so I first start with this. For the rebound I like it fast so I run both valves wide open. It matchs better with my style of riding, really dynamic, with a lot of little pushes and jumps. One thing you have to know is when the shock is new, rebound is a bit slower, and will be faster after few rides. So make sure to have this in mind and check the settings again after some rides. Regarding the pressure I run 225 PSI in the positive chamber and 200 PSI in the negative.

How do you tune the front suspension and back suspension to work together?

I like when they work in the same way, so a quick rebound, and the same feeling. I tend to have my fork a little bit harder so it doesn’t dive too much, this is something really easy to adjust with the Rock Shox Pike.

With the rear shock do you have a special tune?

We were involved in the development and making of the shock at the beginning, so for production they use our requests regarding the setting. I use then a standard set-up. The tune has been updated with some changes for the Jekyll 27.5″ and now you have a better feeling within the travel and more progression.

How do you vary the rebound on the short travel and long travel rear shock elements?

Wide open and never change them. Not really original but simple.

If you were a normal rider going at slower speeds what would you vary compared to your race set – up?

Fast rebound requires that you control your bike because this can make it accelerate. I’ll recommend then to run a bit of a slower rebound. Regarding the pressure it’s normal if you bottom out sometimes but it should not happen all the time. I’ll then first follow the scale Cannondale provide with the Jekyll and see where I am at. I then go a bit higher with the pressure or lower the pressure accordingly. Remember that changing your shock pressure will impact your rebound, so when you change pressure, you need to check your rebound too.

How much influence did you have on the production suspension tune that is on the Jekyll?

See my answer before, plus we did some testing on the first Jekyll in 26″ and then again for the new 27’5. Every-time we were able to make our request and then try different versions, regarding efficiency but also reliability.

What is your suspension tune aimed at doing with the bike?

Any recommendations for those just starting out with the the Jekyll when thinking about the best set-up?
Start with the recommended set-up and then play with it until you find a good compromise. It doesn’t take too long but it is worth to dedicate one or two rides just for this if you want to find the perfect fit for you. After that you’ll not have to touch it and your ride will be even better.

PS: remember the news that Jerome won’t be riding Mavic wheels anymore? He’ll be on SRAM!

With these comments then we will be carrying out testing to see how set and forget the suspension is, on first glance a shock like this looks complicated, but in reality it is probably not. 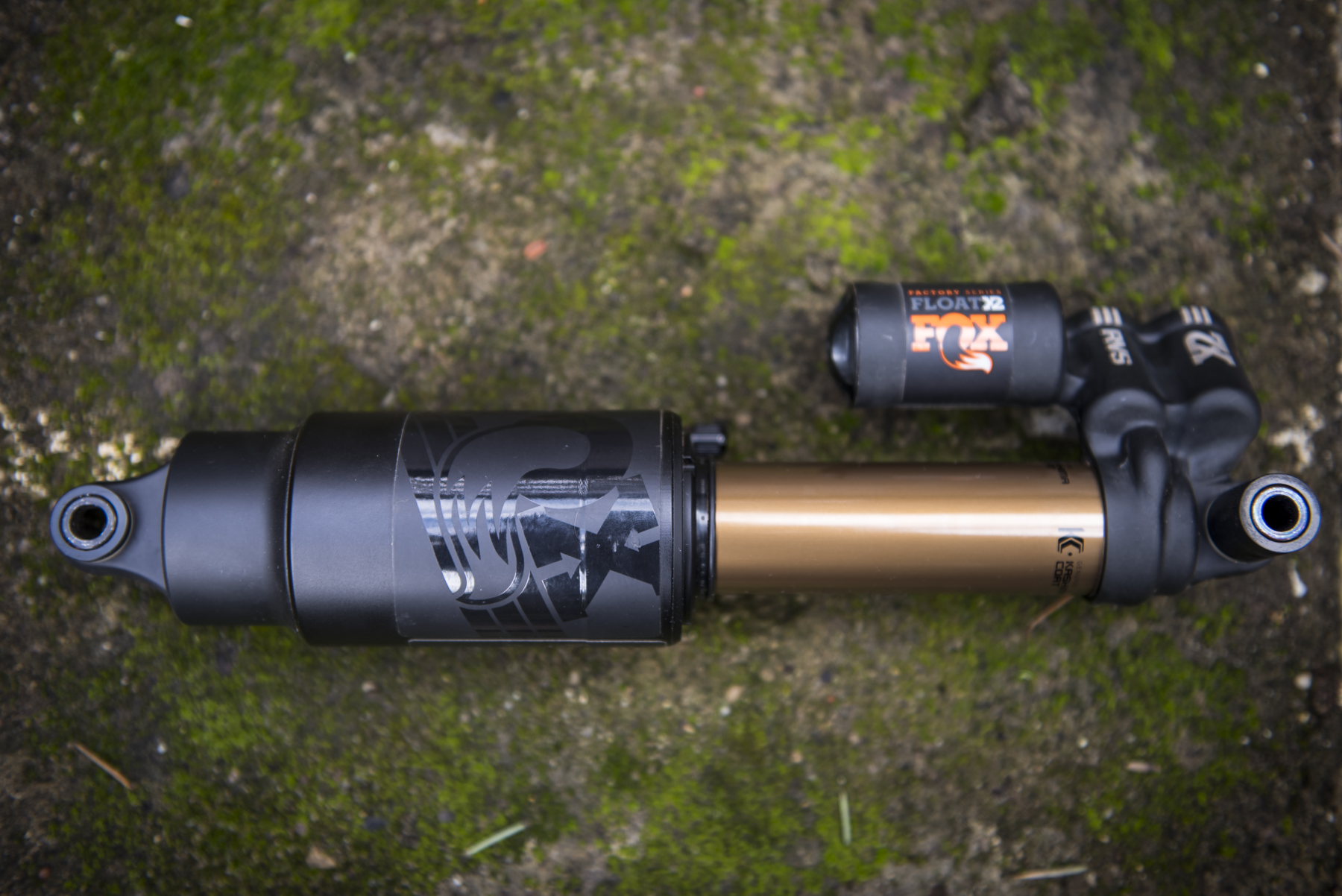 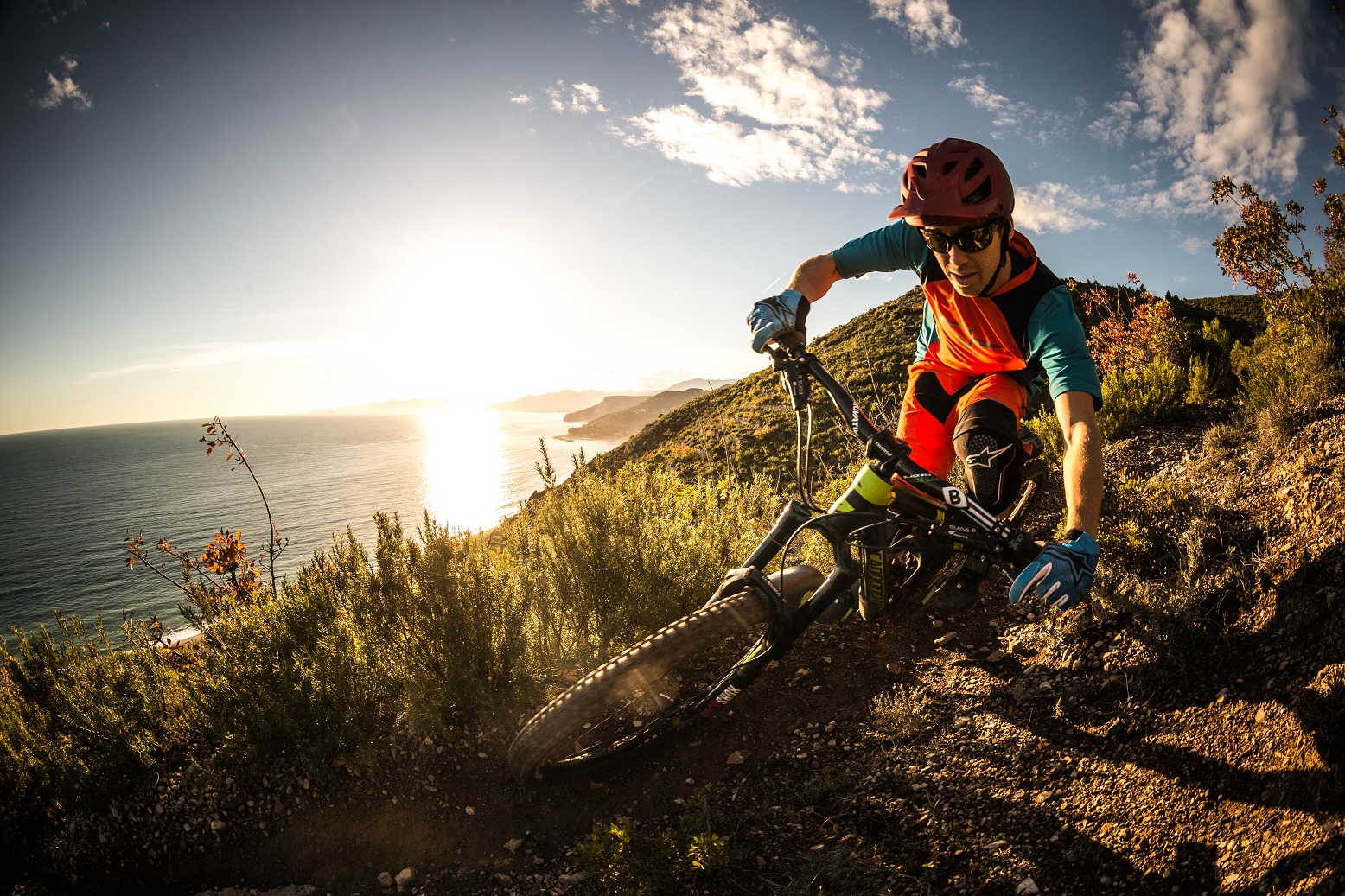 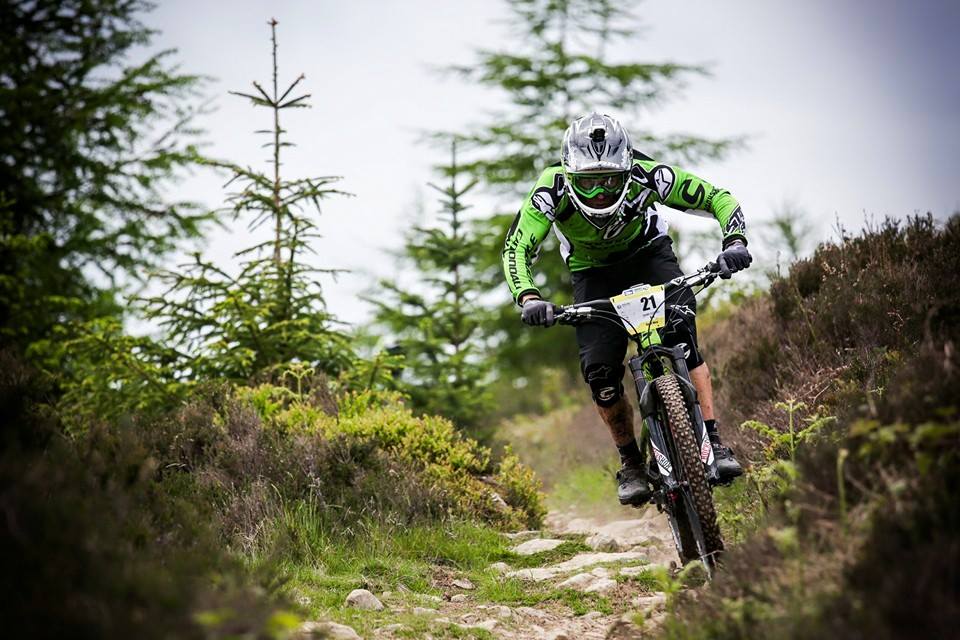