I first got this frame almost a year and a half ago and eventually featured it as an all out “Dream Bike” build. It was a bit of a strange case for me at the time because I hadn’t really ridden, much less owned a Devinci until then. There are certain attributes, geometries and suspension systems that I tend to prefer, but all in all, I do my best to be neutral and open minded. When looking for a 27.5″ personal bike, I arrived at the Spartan because I tend to like Dave Weagle’s kinematics, and the geometry appeared to be right in my wheelhouse. Anyhow – here I’ll go over how the full carbon Spartan 27.5″ has treated me as a frameset, regardless of which components were hung on it. 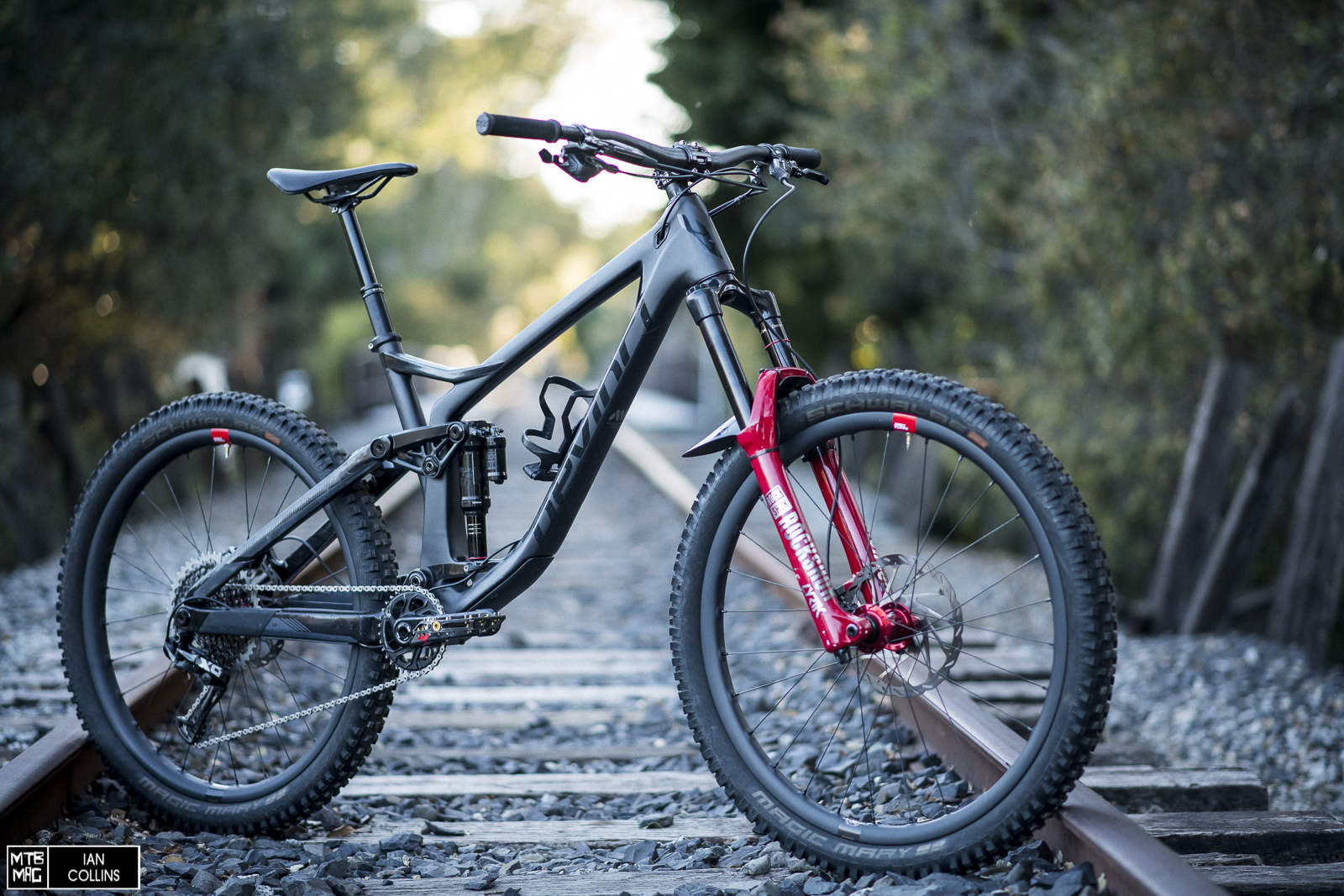 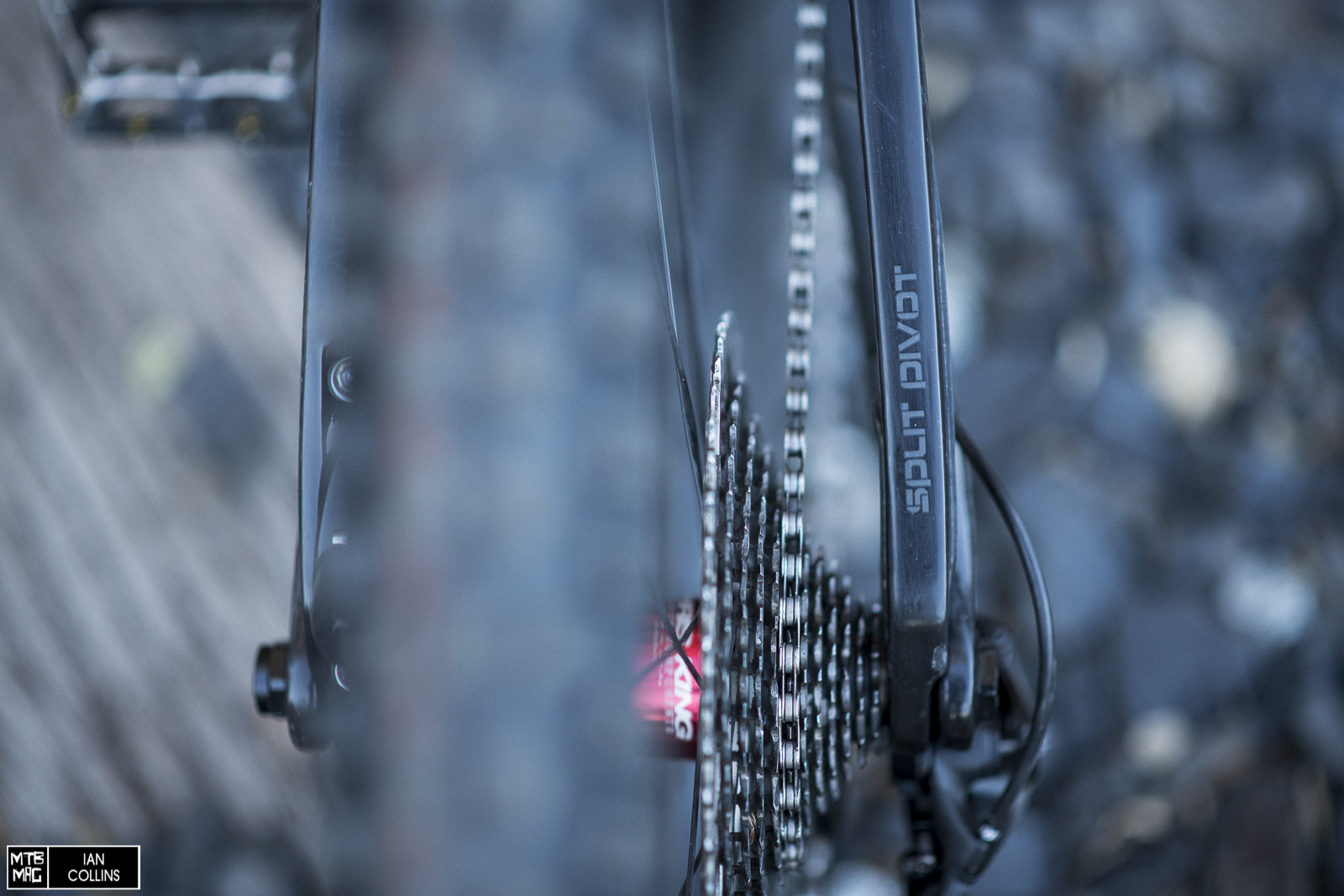 Starting with suspension, the Spartan is essentially a four bar system, but deviating from the norm, it uses DW’s “Split Pivot” suspension platform where a crucial pivot is concentric to the rear axle. 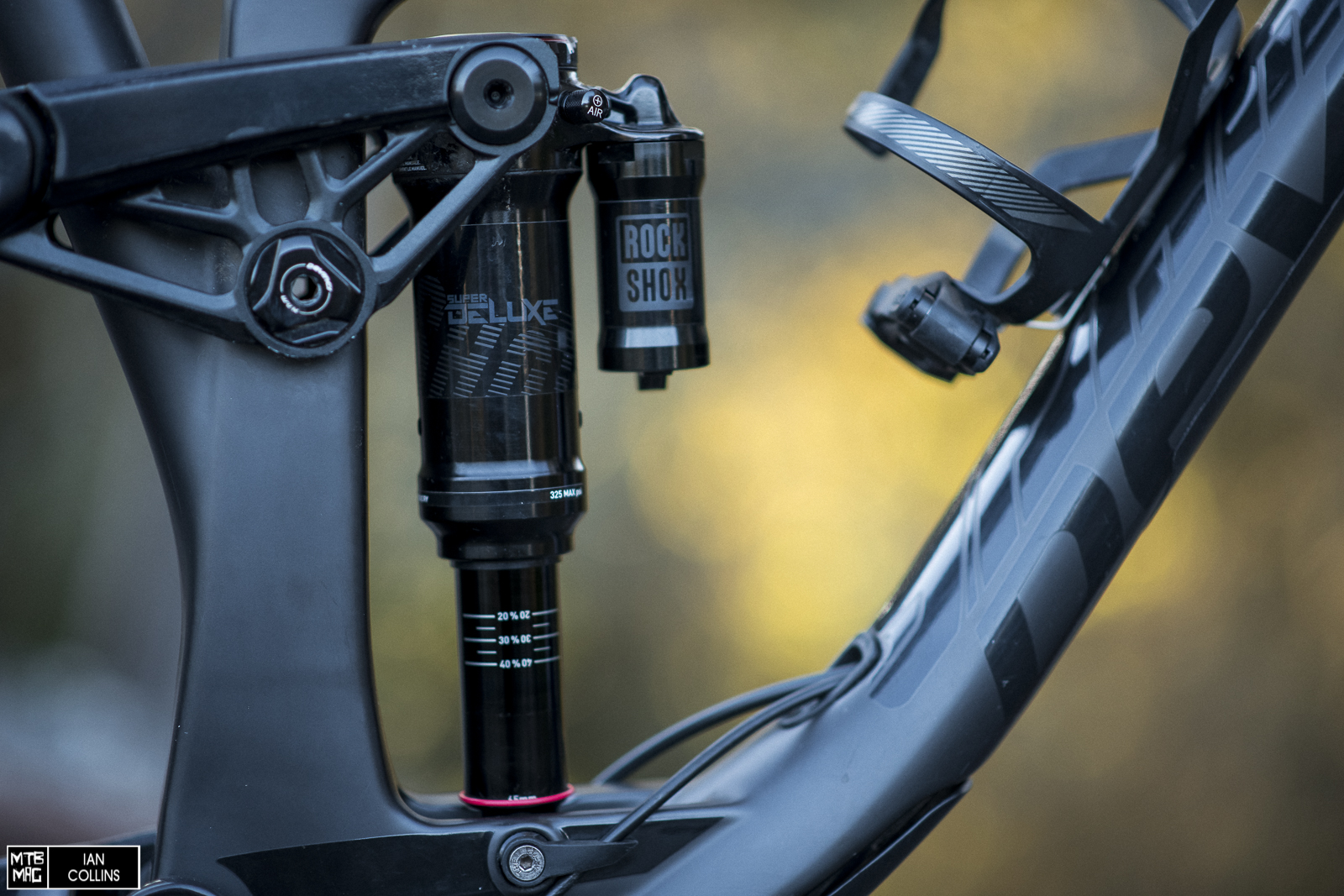 At the heart of the bike, a burly rocker (with a great deal of machined relief) drives a 205mm X 65mm RockShox Super Deluxe rear shock with a trunnion mount. At 165mm of rear travel, this provides a nice, low leverage ratio of 2.53:1, making it one of the leaders in its class. 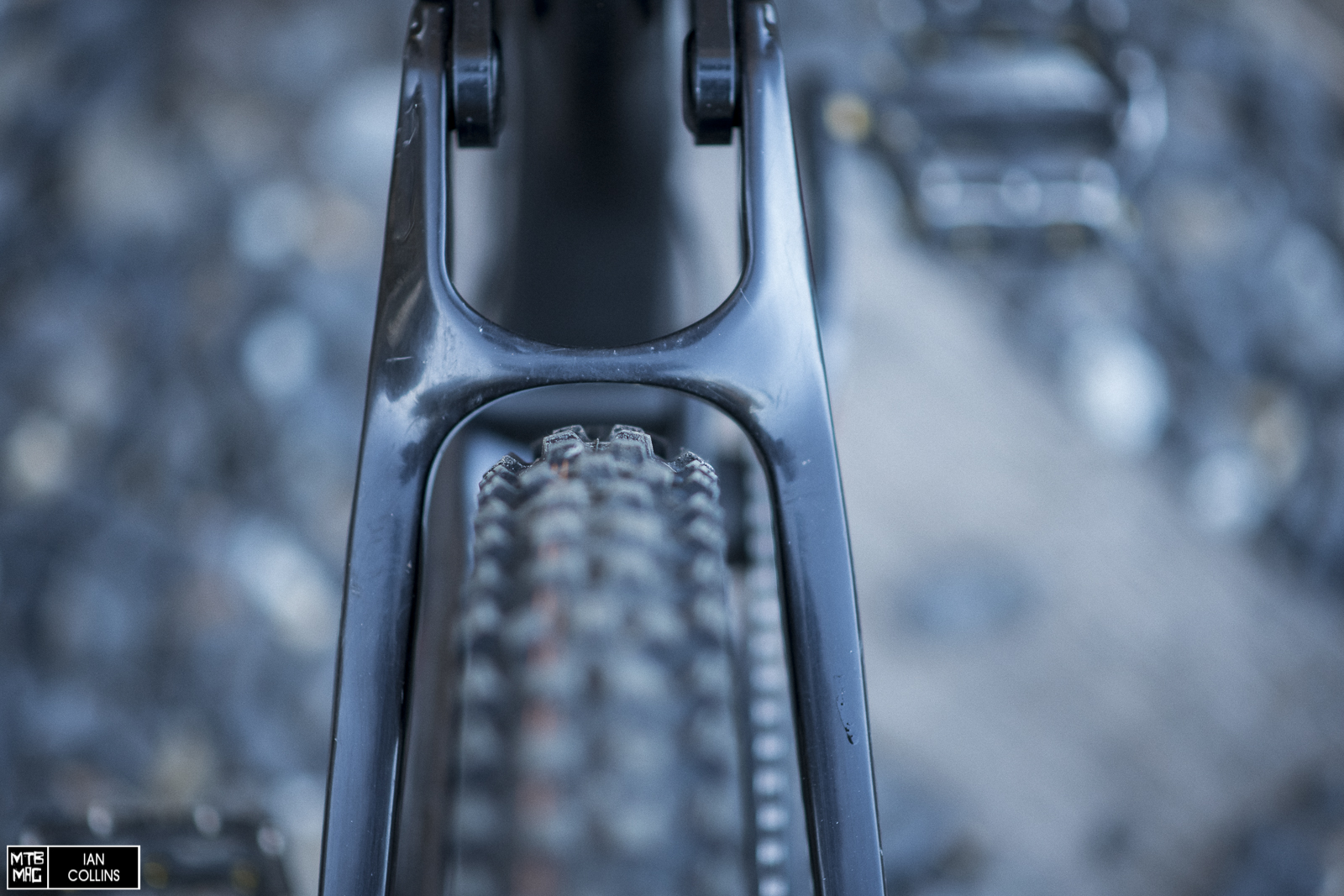 Out back, the broad, sleek seatstays and asymmetrical chainstays provide enough clearance for tires up to 2.6″ wide. 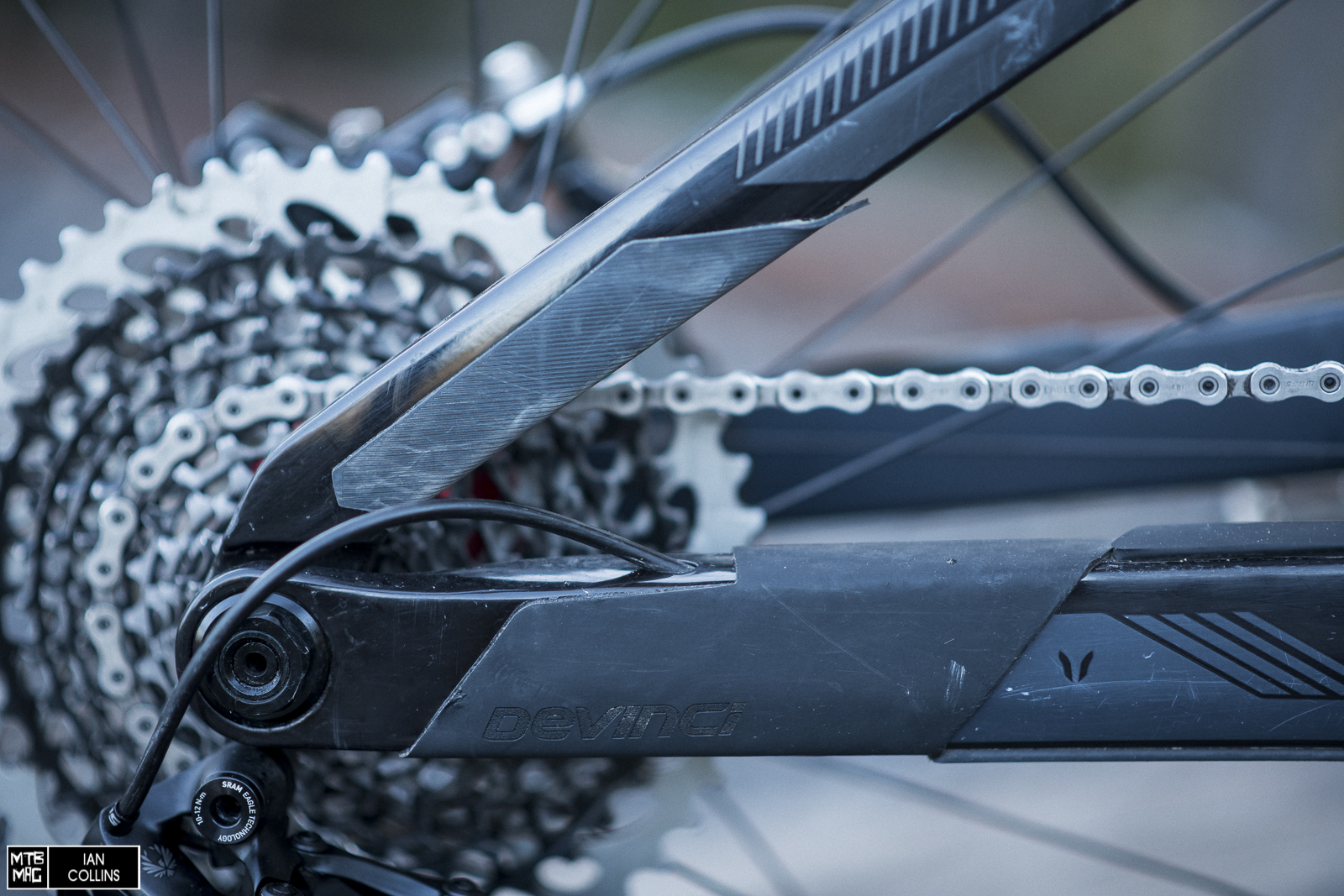 The frame features a few cleverly placed rubber protections throughout at the back end. None of which were super dense or heavy, but like many others, they didn’t have the best adhesives and peeled slightly in a couple of corner areas. 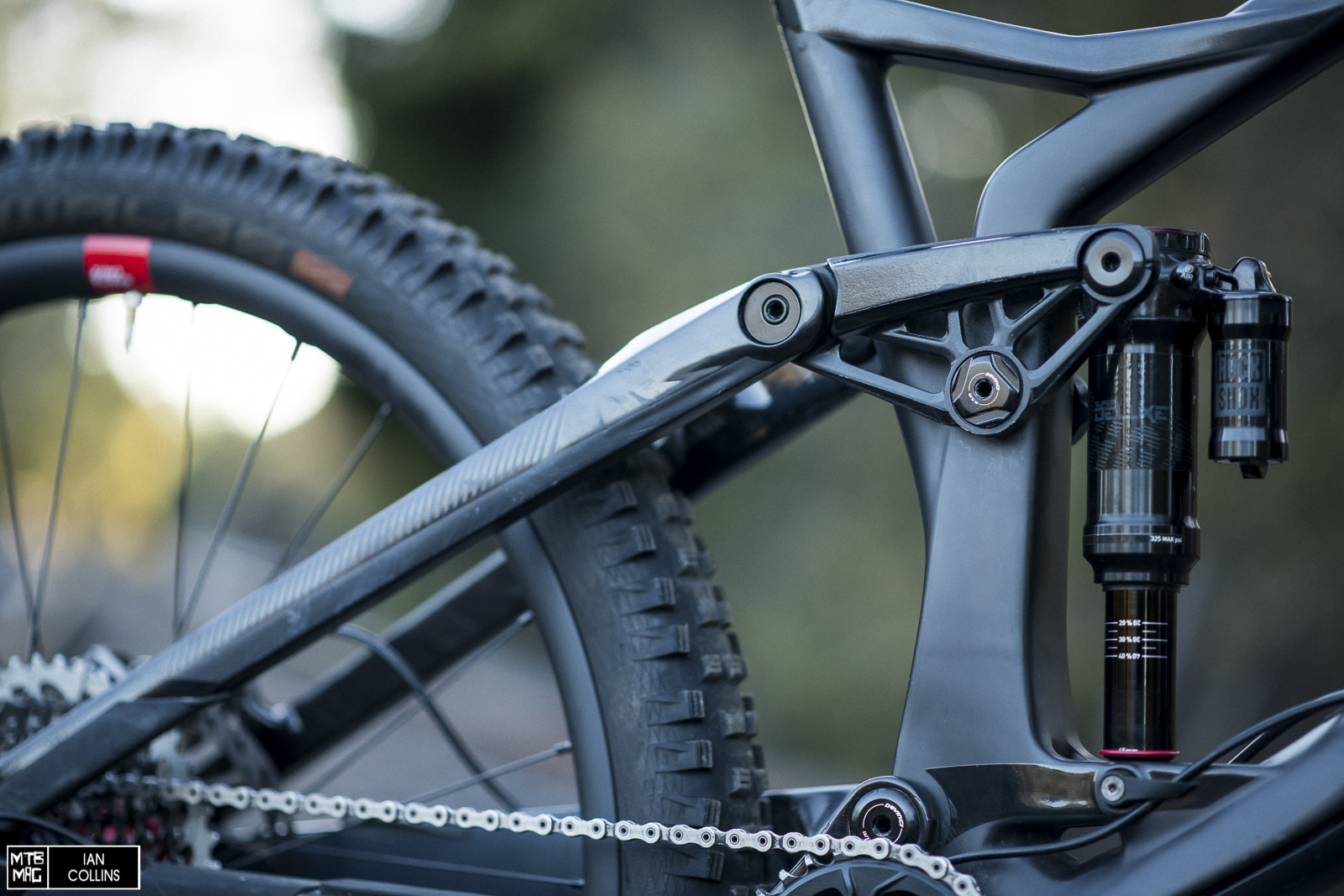 It’s a bit difficult to see, but where the seatstays connect to the back of the rocker link, there is a flip chip. By way of a 5mm allen key, despite being a bit cumbersome to use, you can adjust by 5.5mm of bottom bracket height and .6º of head angle. 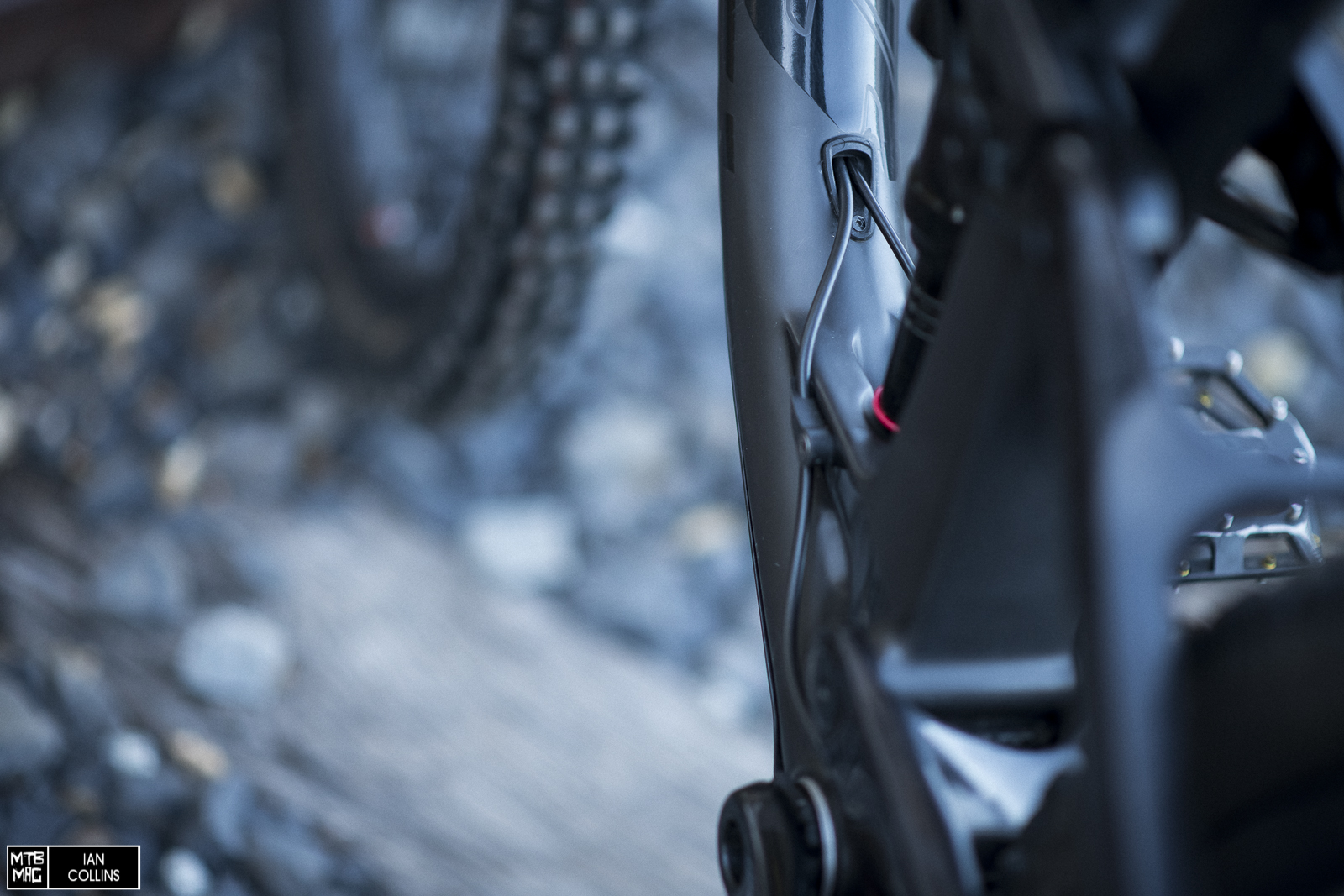 The cable routing is super sleek and internal throughout the front and back end, with sneaky tabs (to keep things tidy) that screw into the lower shock bolt. There are no sleeves, so maintenance was a bit on the tedious side. Another minor gripe I had was since there are rather dramatic curves in the cable’s routing, so the lining of the housing wore quickly and hampered shifting quality every few months. 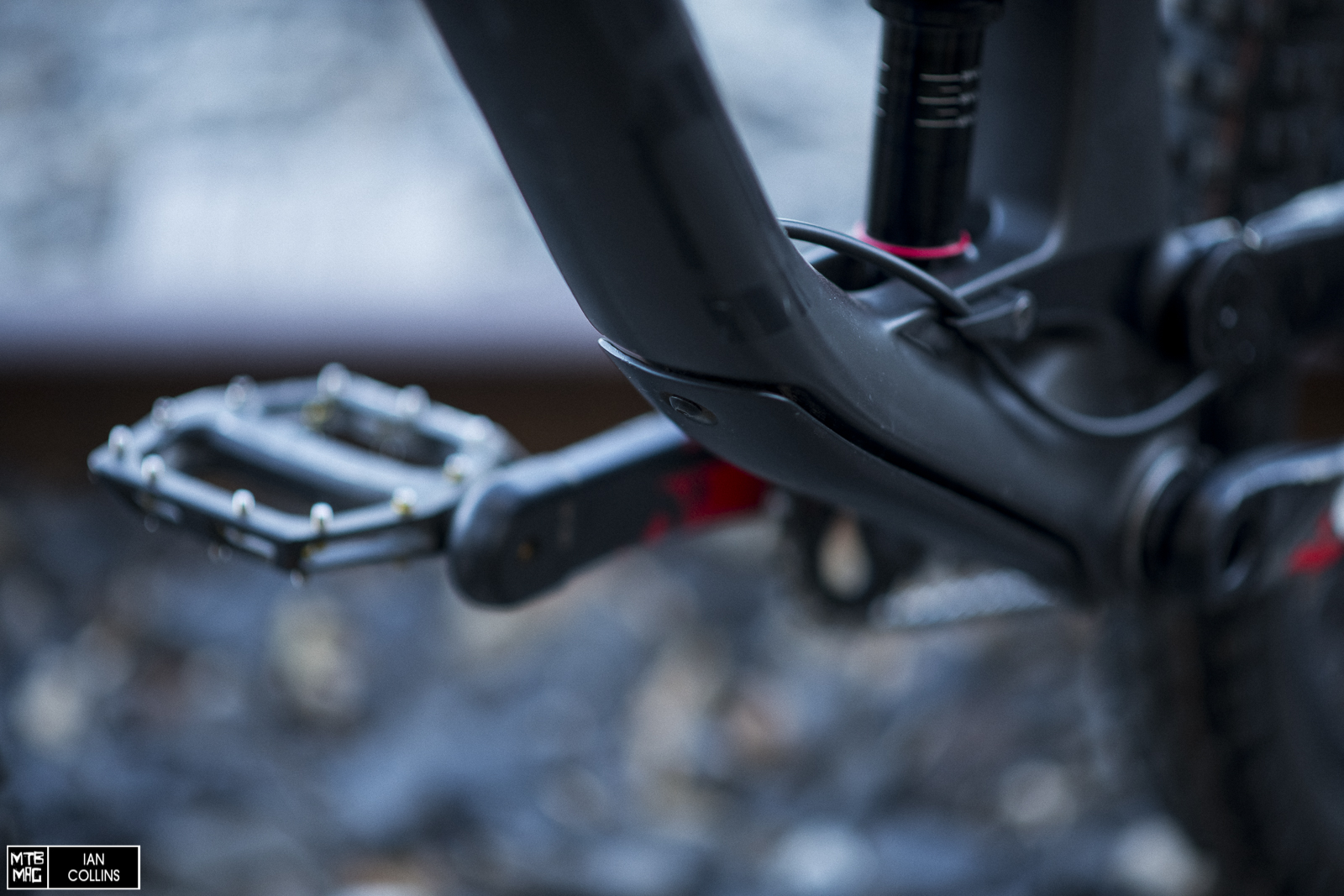 The downtube’s burly carbon/kevlar protector screws in and houses Di2 batteries. Beyond that, you couldn’t really put much else in there.

The numbers on this frame were a huge high point for me. Compared to most bikes in the long travel, medium (27.5″) wheeled “Enduro” category, at the time it came out, the Spartan had just the right mix of steep seat angle, moderately slack head angle, long reach and  fairly short chainstays. At 6′ tall I tested the Large and mainly rode it in the high/steep position. 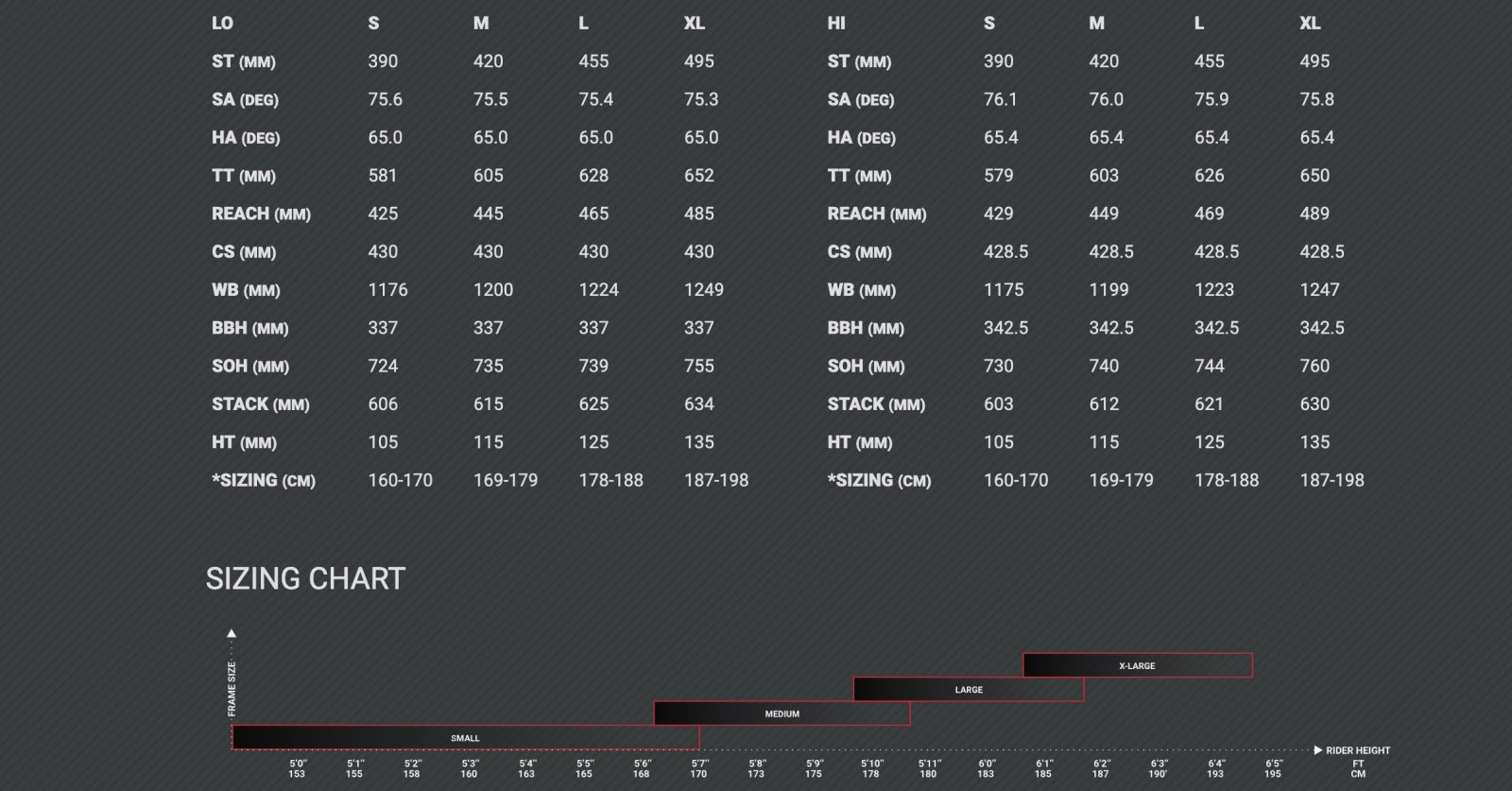 Most good rides start with a climb, and even in high level enduro racing, it often takes pedal power to get to the top, so we’ll start there. Compared to everything else I’ve ridden (Enduro, Jekyll, Nomad, Remedy, Reign, etc.) in this class, the Spartan is a freakishly good on the climbs. It’s equal part body positioning, due to the steep seat angle which helps push your weight forward when seated, and equal part kinematics. Dave Weagle’s suspension layouts are generally excellent  in terms of pedaling efficiency, but given how much travel the Spartan has, I didn’t expect it to be anywhere near as good as it is. Although I rarely used trail mode, on long grinding climbs on smooth surfaces I would lock the rear shock out here and there. For general, technical climbs however, there was simply no need. 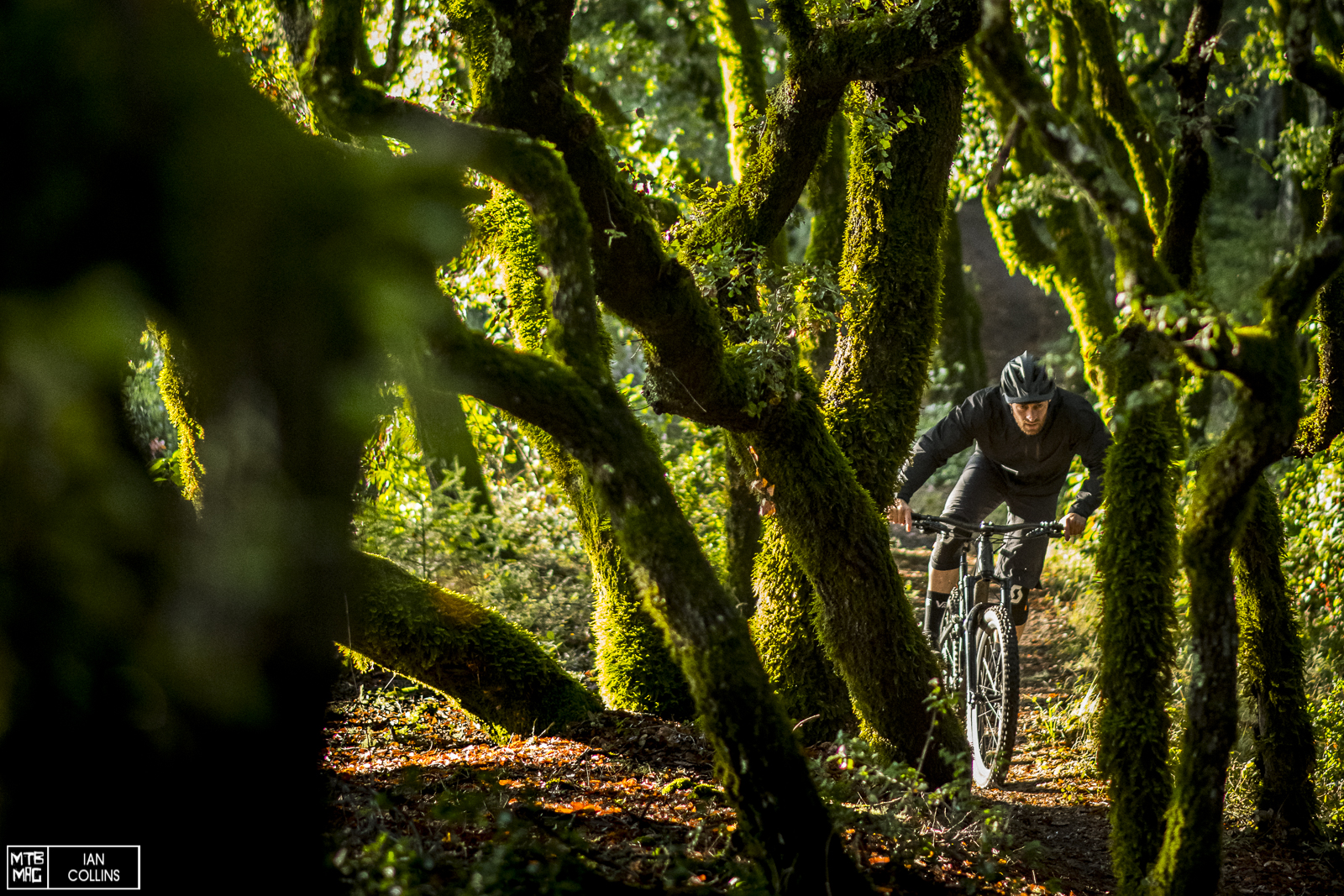 With a fairly firm platform to push off of, it was no surprise that the Spartan was sprightly and light on its feet. That’s not to say that it had loads of pop or anything, but rather, it didn’t wallow or feel boggy when I would load the suspension. With very well balanced suspension, I found myself more comfortable in the air with it compared to anything else I’ve ridden, save my downhill bike. I mainly rode the Spartan in the Santa Cruz area, but also managed to get time on it in So Cal, Bend, Bellingham, the Sunshine Coast and Whistler. 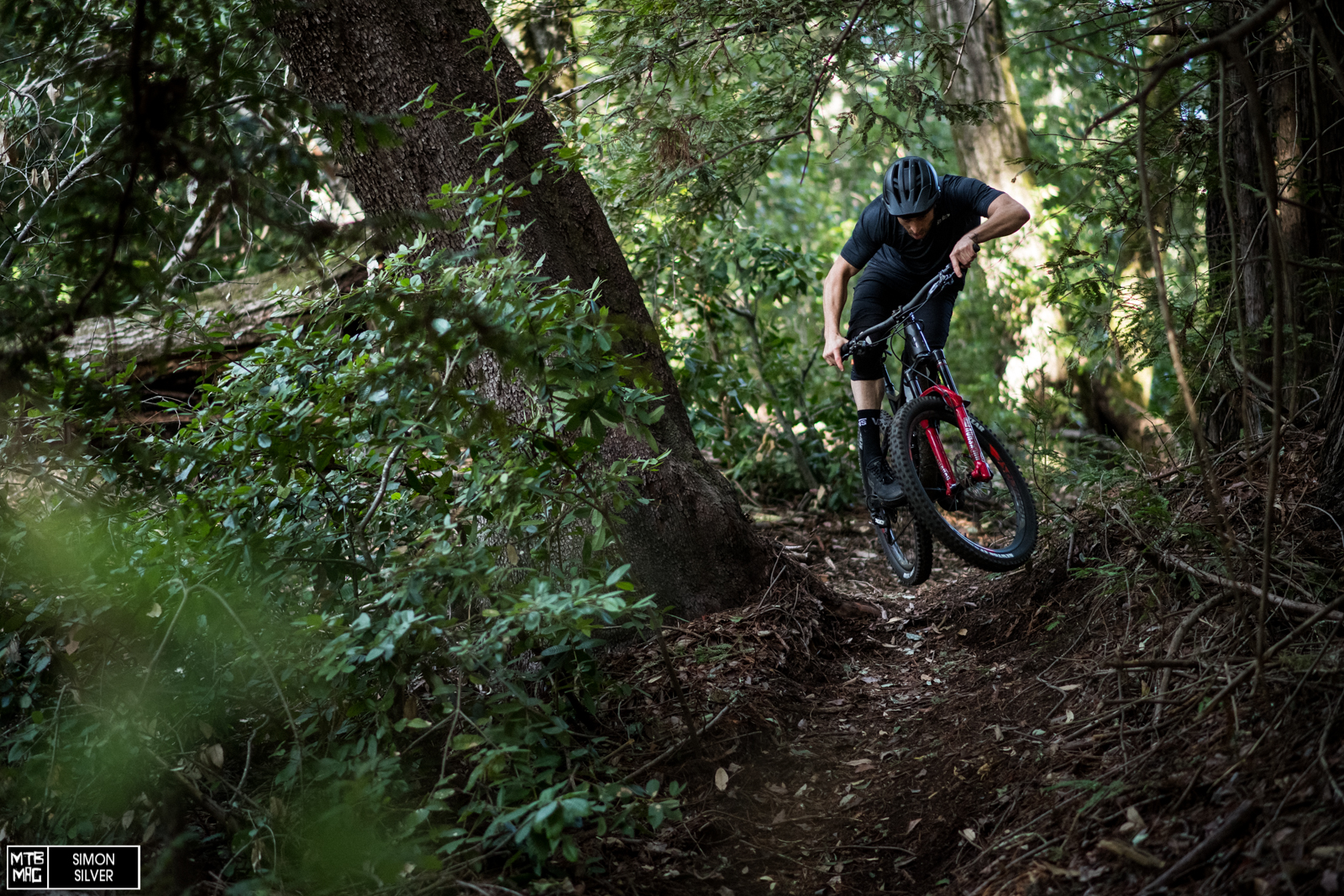 When it came to cornering, I found that the suspension itself provided a similar feel to what I mentioned in the paragraph above. When you go to load the bike into a corner, it resisted diving nicely and dug right in, sitting up in the travel. A great deal of this also has to do with how progressive the suspension is. Since it has a nice low leverage ratio, the shock isn’t overwhelmed and thus, I was able to run the bike with either one or zero volume reducers. In other words, the frame’s suspension rate handles the progression as opposed to other poorly designed bikes that require you to pack your rear shock full of spacers in order to prevent it from bottoming…Anyhow – I never once felt a metal to metal bottom out on this bike; in that regard it was simply astounding. The other aspect to credit for the Spartan’s brilliant cornering is its geometry. The BB is quite low – enough so that I rarely deviated from the “high” setting. Additionally, I prefer fairly short chainstays and at around 430mm I think these felt snappy in the turns. Last but not least, the frame itself is brilliantly laid out – for how lightweight it is, it’s shockingly stiff and well supported at the back end. You can really feel that in the corners, but it’s still a nicely tuned layup that still takes the edge off front to back. 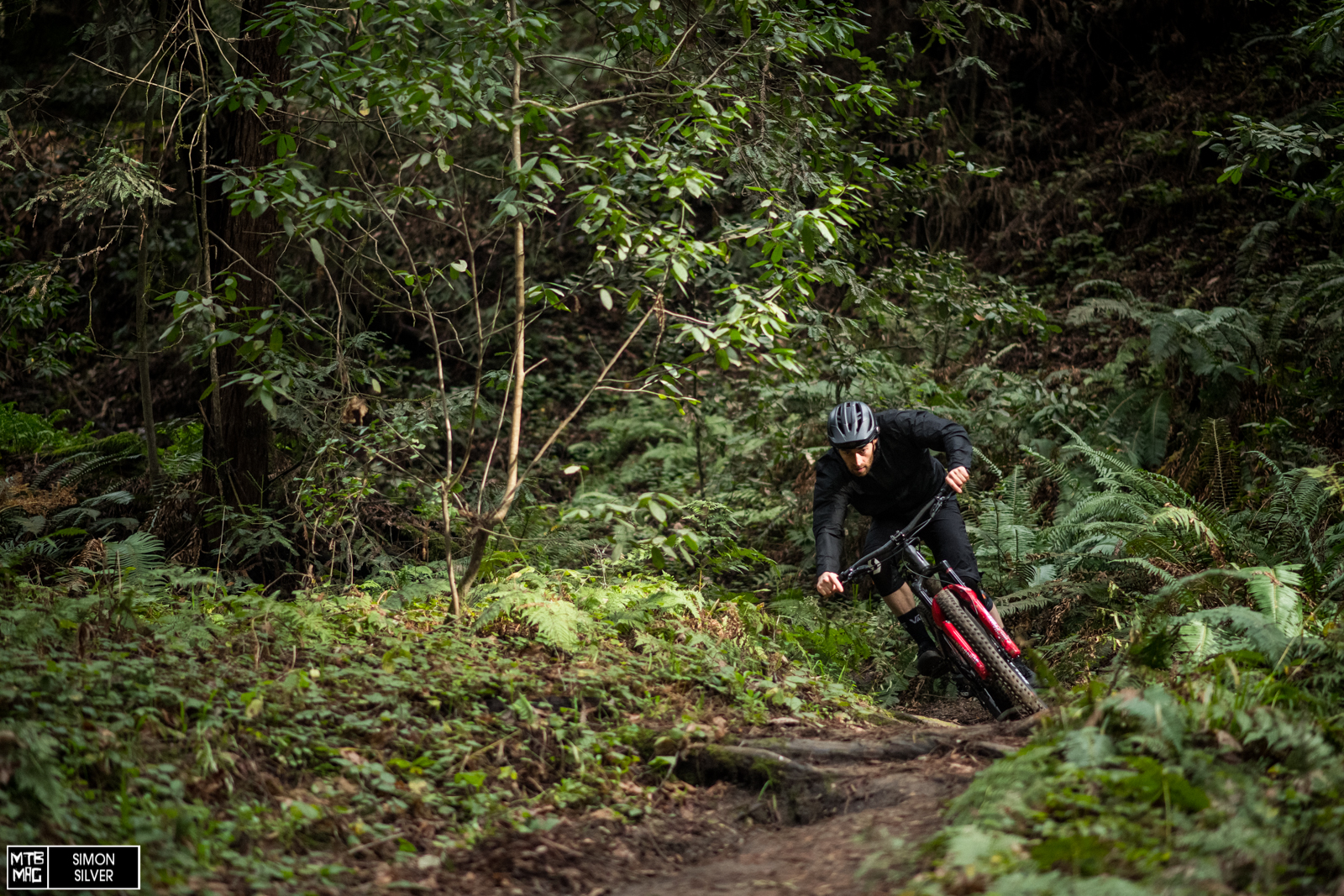 All that glowing praise for the bike’s climbing and calm, planted suspension has to come at some sort of expense, right? Well, the Devinci does have quite a bit of anti-rise, as well as noticeably high numbers for pedal kickback, particularly as you get deeper into the travel. As you might expect, it had a tendency to ride ever so slightly rough, when things got really rough. Successive, mid sized hits weren’t gobbled up quite as smoothly as they would be on a less well rounded, mega plush bike. That’s not to say the bike was even remotely close to nervous by any means, but you could feel the pedal kickback at times on really harsh terrain. It’s all about gives and takes, but this did make me curious to see if a coil sprung rear shock might open things up a bit. As this bike is still running like a dream, in the future, I’ll be exploring that option… 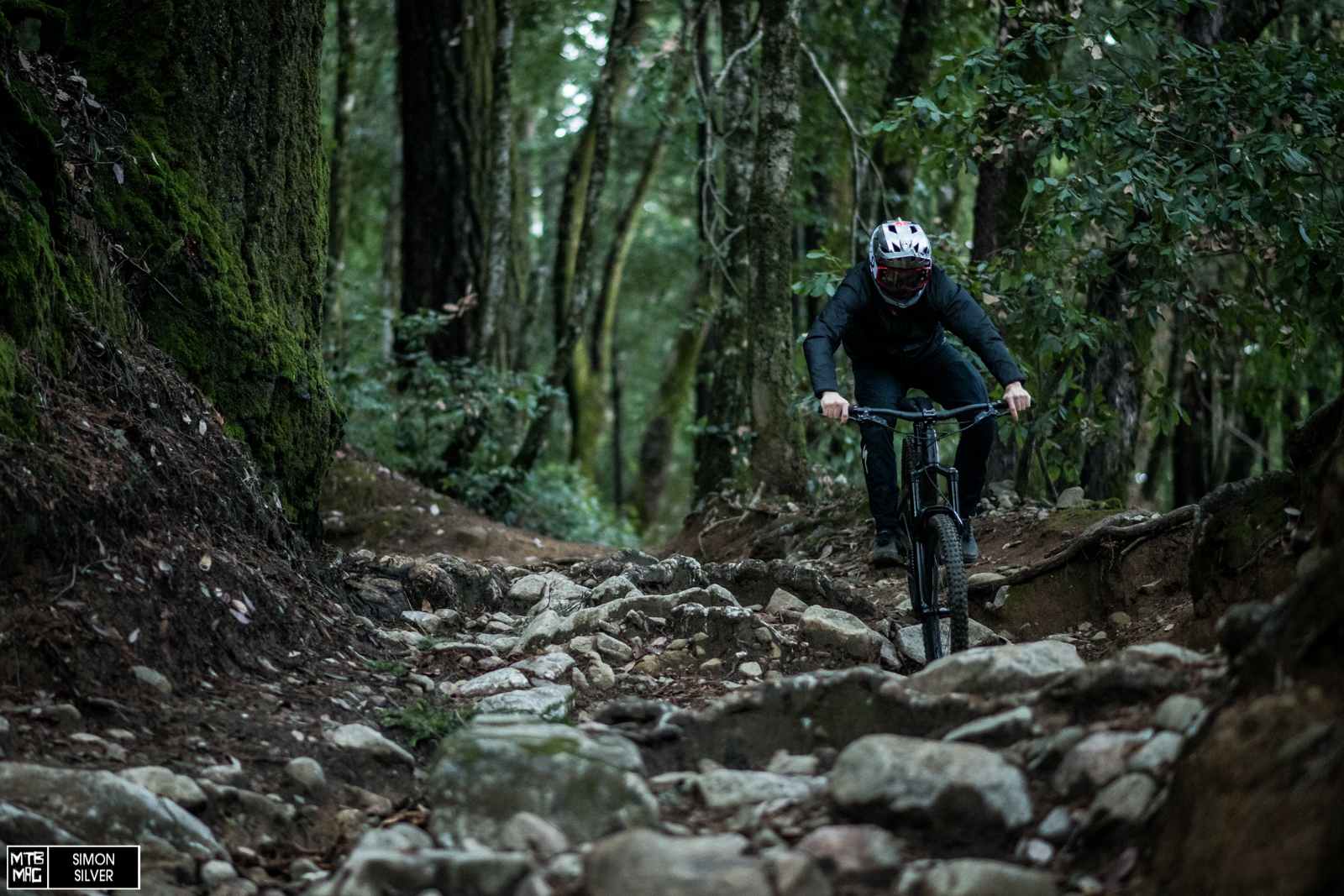 In terms of longevity, all of the bearings and pivot hardware are in tip top shape and the Spartan has held up extremely well given how much use it has seen. The rear shock has received a couple of quick air can services, but has shown no signs of degradation. Aside from some minor complaints about a couple small corners of the rubber chainstay protection, this is a frame that’s in it for the long haul.

In the grand scheme of things, I’ve really enjoyed this frame. Like many other flagship, carbon fiber, frame only options, it is quite pricey. With that in mind, Devinci does offer completes at great value, such as their $5,529 GX build. Getting back to the summary, I found the Spartan to be more well rounded than many of its “Enduro” counterparts. In short, it’s sprightly, refined and efficient. I have a hunch that a coil and a 180mm air spring would make it more of an all out smash machine if you’re into that kind of thing, but for the trails I ride throughout most of the year, it’s been a perfect go-to bike. In a world seemingly dominated by brands like Santa Cruz, Specialized and YT, it would be foolish to overlook Devinci these days.