A couple of times per year, I build up a personal bike to conduct various product tests on. A recent onslaught of long travel, 27.5″ wheeled enduro bikes have made their way between my legs for testing, but I haven’t been completely enamored by any one particular bike. I know what *I like*, but as an editor, it’s important that I recognize that other people have different preferences. And thus, I try to be as neutral and clear as possible when I’m reviewing bikes – keeping everyone in mind. That said, there are certain numbers that I prefer for geometry…I like bikes with a low leverage ratio (read – wheel travel:shock stroke travel)…I am usually a fan of Dave Weagle’s bikes as they tend to actually exemplify what everyone claims to be looking for in terms of kinematics. That would be – sensitive to small bumps, supportive in the mid stroke, and progressive right at the end – resisting harsh bottom outs. Well, I’ve never owned a Devinci before, but on paper, the new Spartan checked all those boxes, so I built one out… 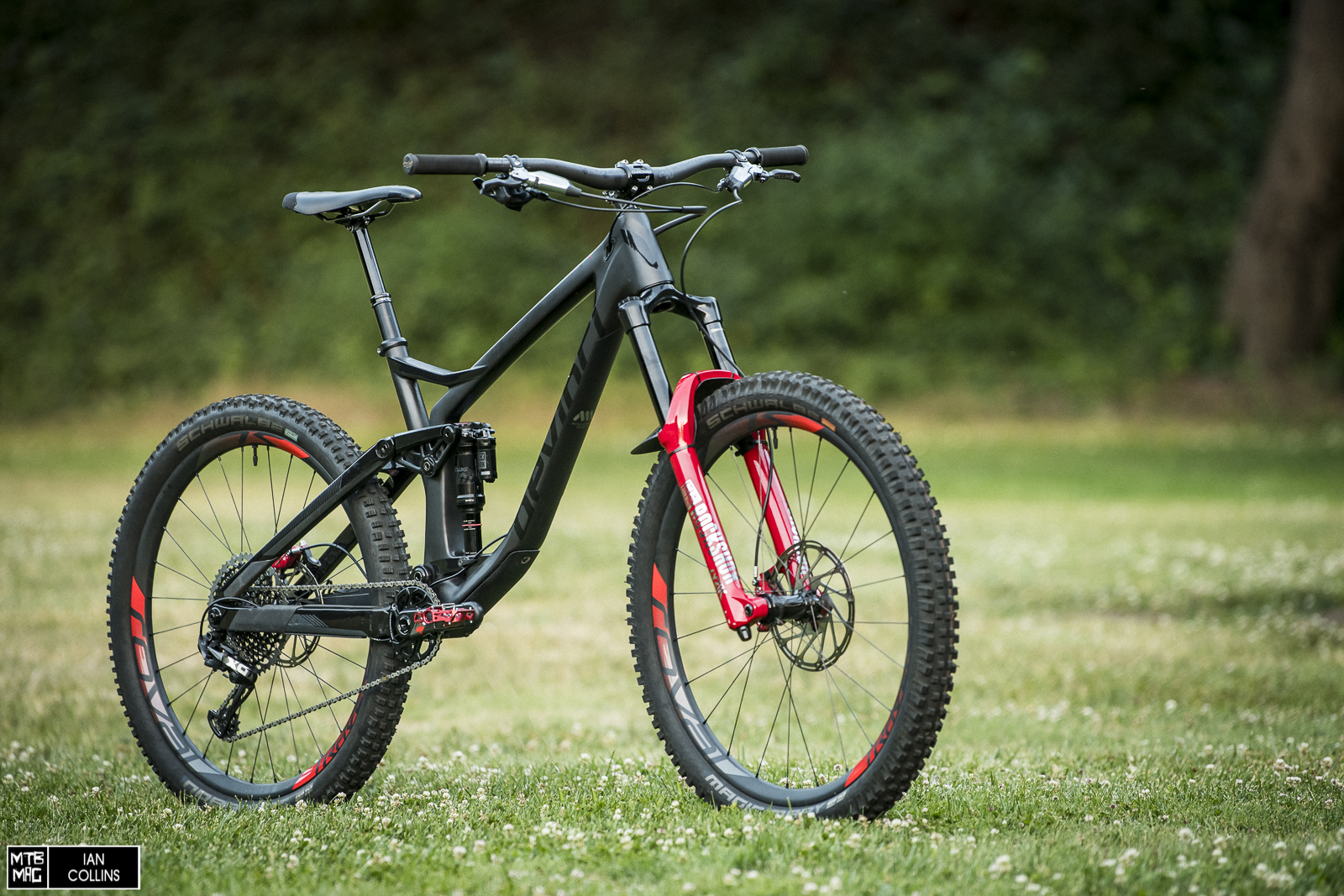 Here it is…27.9 pounds, without pedals, for my size Large. For sake of reference, I’m 6’0″ tall. The frame is full carbon fiber, which keeps things lively and light weight. I love bikes with a four bar style linkage, but prefer the Split Pivot / ABP variety over the interrupted chainstay (FSR style) models as Split Pivot / ABP tends to be more compliant and in my opinion, better isolate drivetrain and braking forces.

Surprisingly, I’ve mostly ridden the Spartan in the High setting. It’s plenty slack for the trails that I ride, and being a bit steeper in the head angle is nice on the mid-grade sections where I want it to feel sprightly. Also, the steeper 74.9º seat angle is helpful in getting me to the top of the bigger climbs when I’m wheezing away. I like short chainstays, but I think there is a fine line with going a bit too short. For me, riding a size Large, 430mm is just right. The same can be said for reach – I’ve ridden longer bikes, but 465mm is just right. Paired with a 35mm length stem, it provides fast steering and I have no problems getting up over the front. 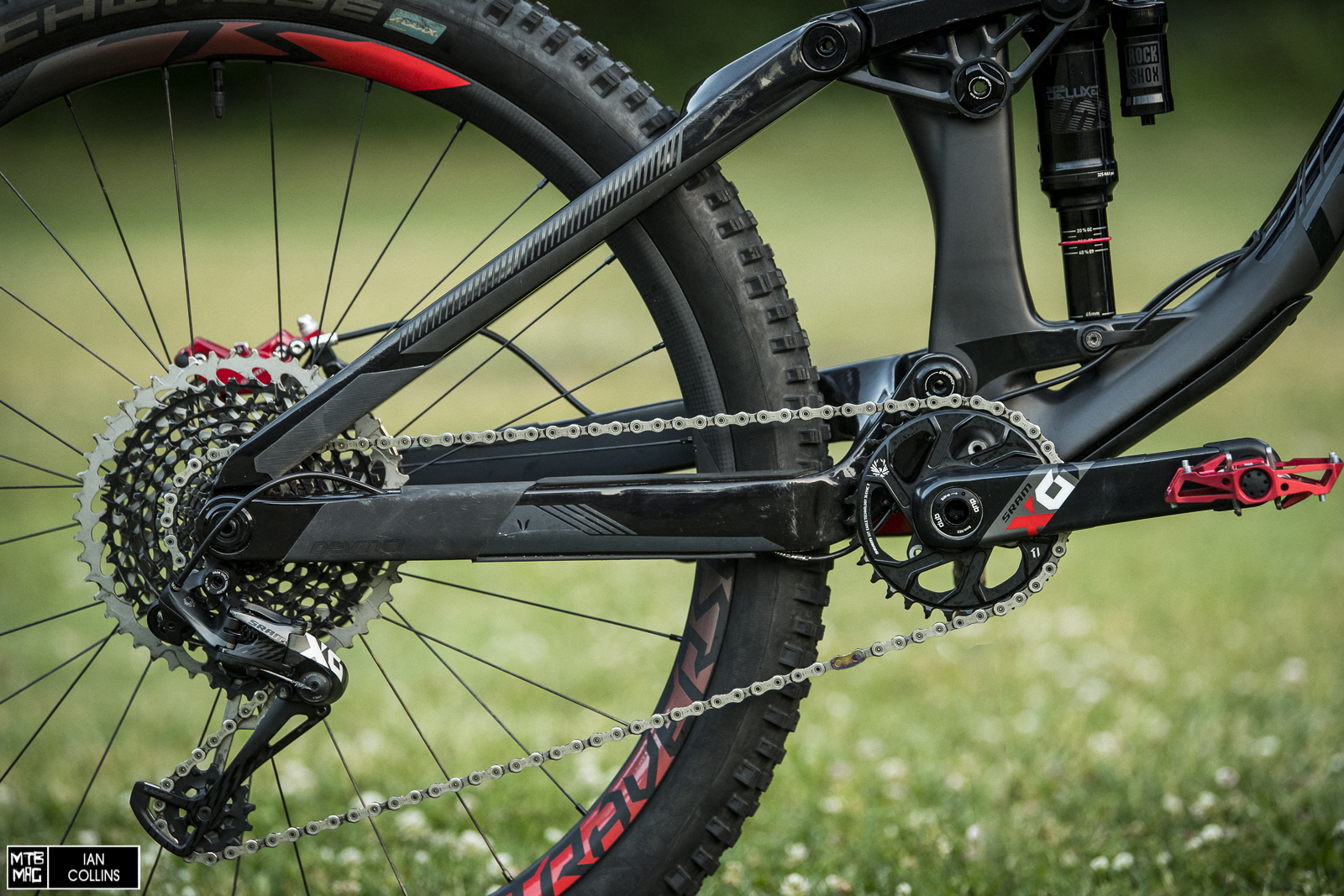 SRAM’s XO Eagle group, and Eagle in general, has been excellent. It has huge range, which can be a relief during big days on a big bike. The shifting is freakishly crisp and very fast…I could run a 34T, but prefer a 32T ring because it means I’ve got just enough clearance and don’t really need a chainguide, most of the time anyway. 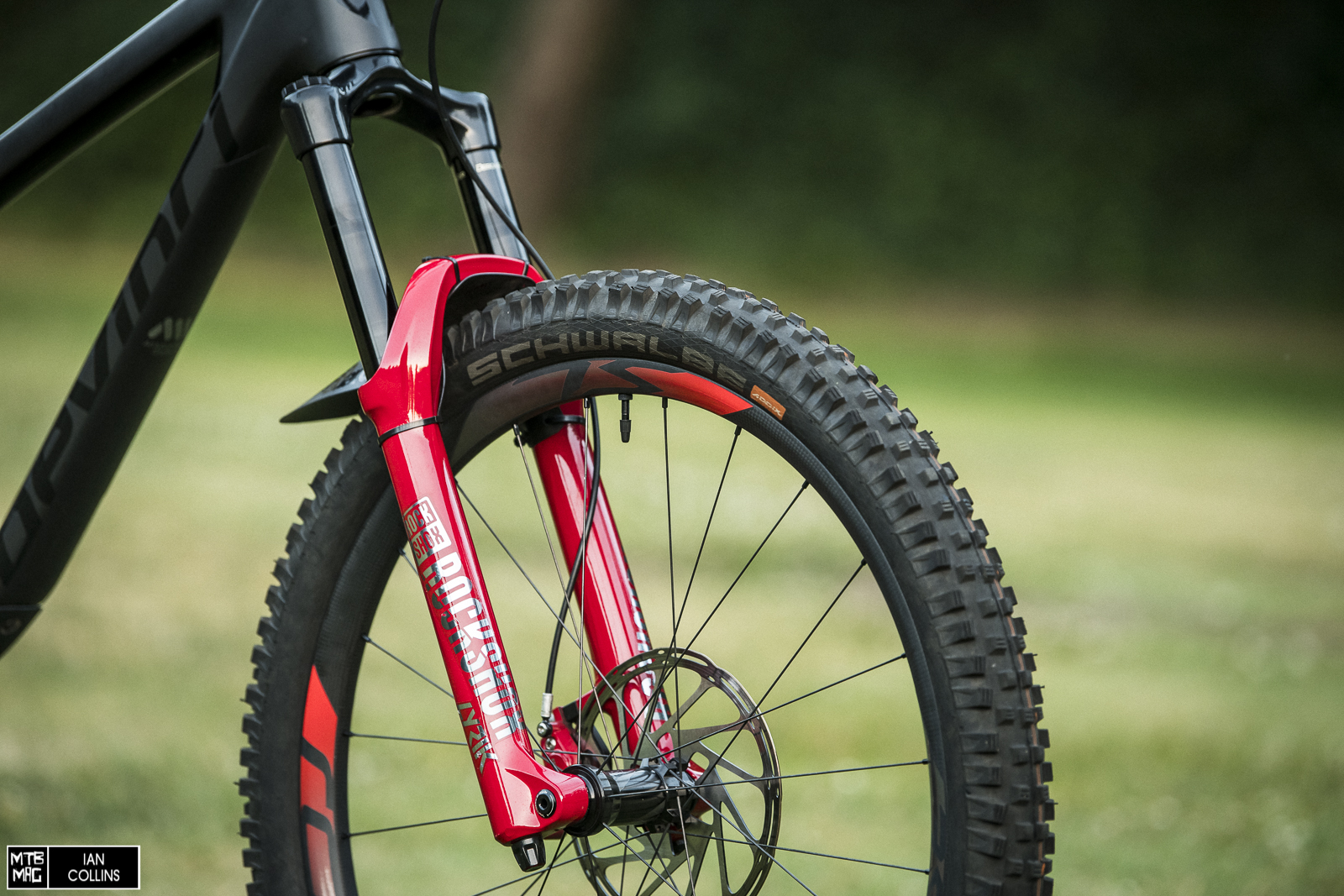 I’ve chosen this bike to test the new RockShox Lyrik RC2 on. The architecture of the fork is basically the same as the last iteration, but the internals have received some big updates. I don’t want to give too much away just yet, but it feels like a completely different, and much improved fork. 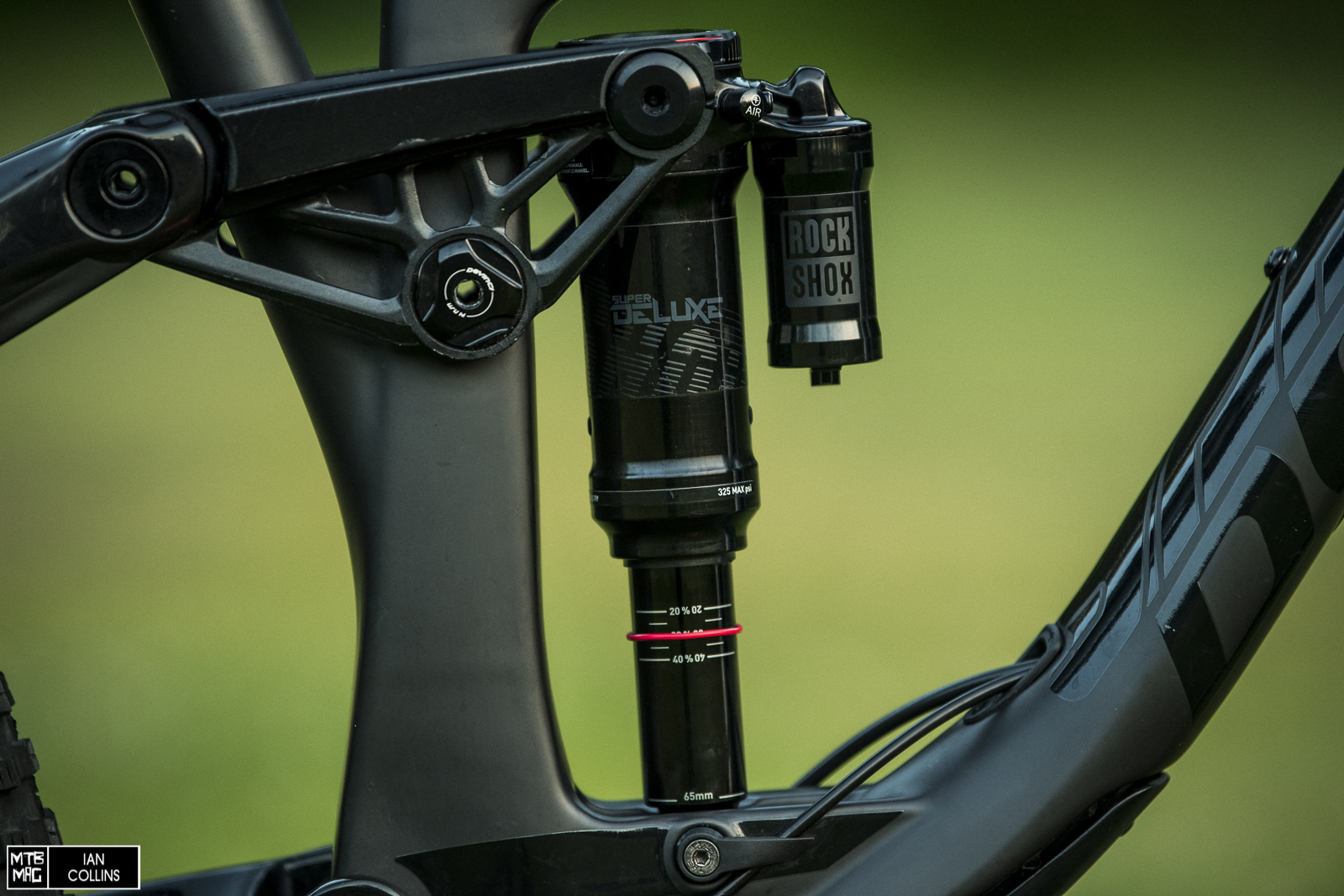 In the past, haven’t been shy about how stoked I am on then RockShox Super Deluxe line and alas, I was quite happy that the Spartan arrives with one installed. The Spartan has 165mm of travel and uses a 65mm stroke shock stroke length. That gives it a 2.53:1 leverage ratio, which is less taxing on the rear shock than the average bike is. That’s part of the reason I like this bike. Anyhow, I typically have to run 2 to 3 volume reducers in my rear shock to get enough bottom-out resistance. On my Spartan, I don’t need to run any volume reducers, whatsoever. That is shocking…No pun intended. 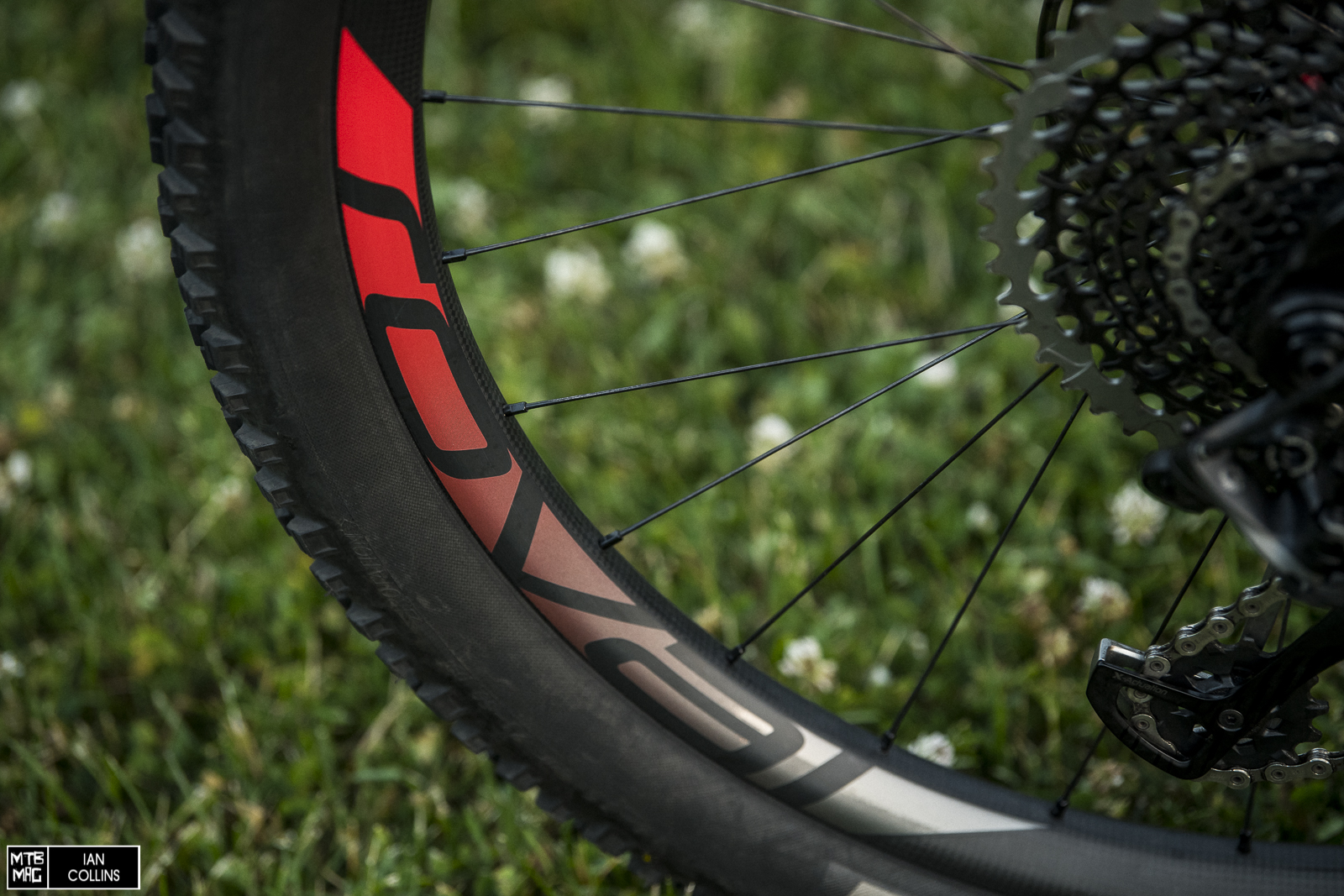 I’ve tested a handful of different carbon fiber wheelsets over the last few years and keep coming back to Rovals. Specifically, the Traverse Fattie SL. At 1495 grams, they’re quite light and very, very tough. Above all, they don’t feel too rigid on the trail. The layup gives just enough vibration reduction while still being stiff enough in the corners. The relatively wide 31mm inner diameter keeps your tires from rolling in the corners. 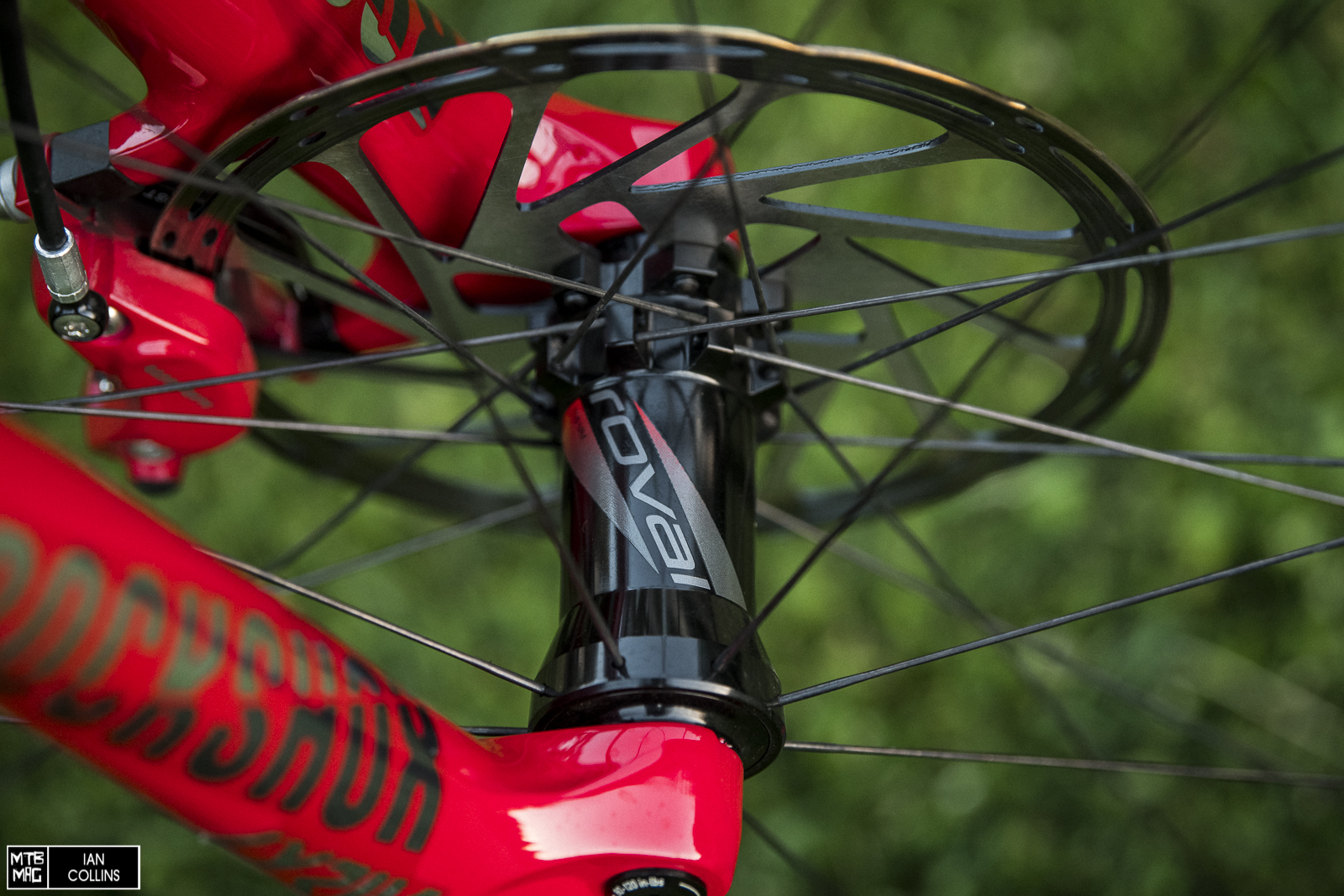 I’m also quite fond of the hubs at the heart of the Roval wheels. Up front, they’re Torque Cap compatible, which helps squeeze out a little bit of extra stiffness. In the back, they utilize DT-Swiss’ tried and true “Star Ratchet” engagement system. A nice perk is that they feature the upgraded 54T system for super fast engagement. Bonus: the driver can also be rebuilt with your bare hands and some grease, without touching a single tool. 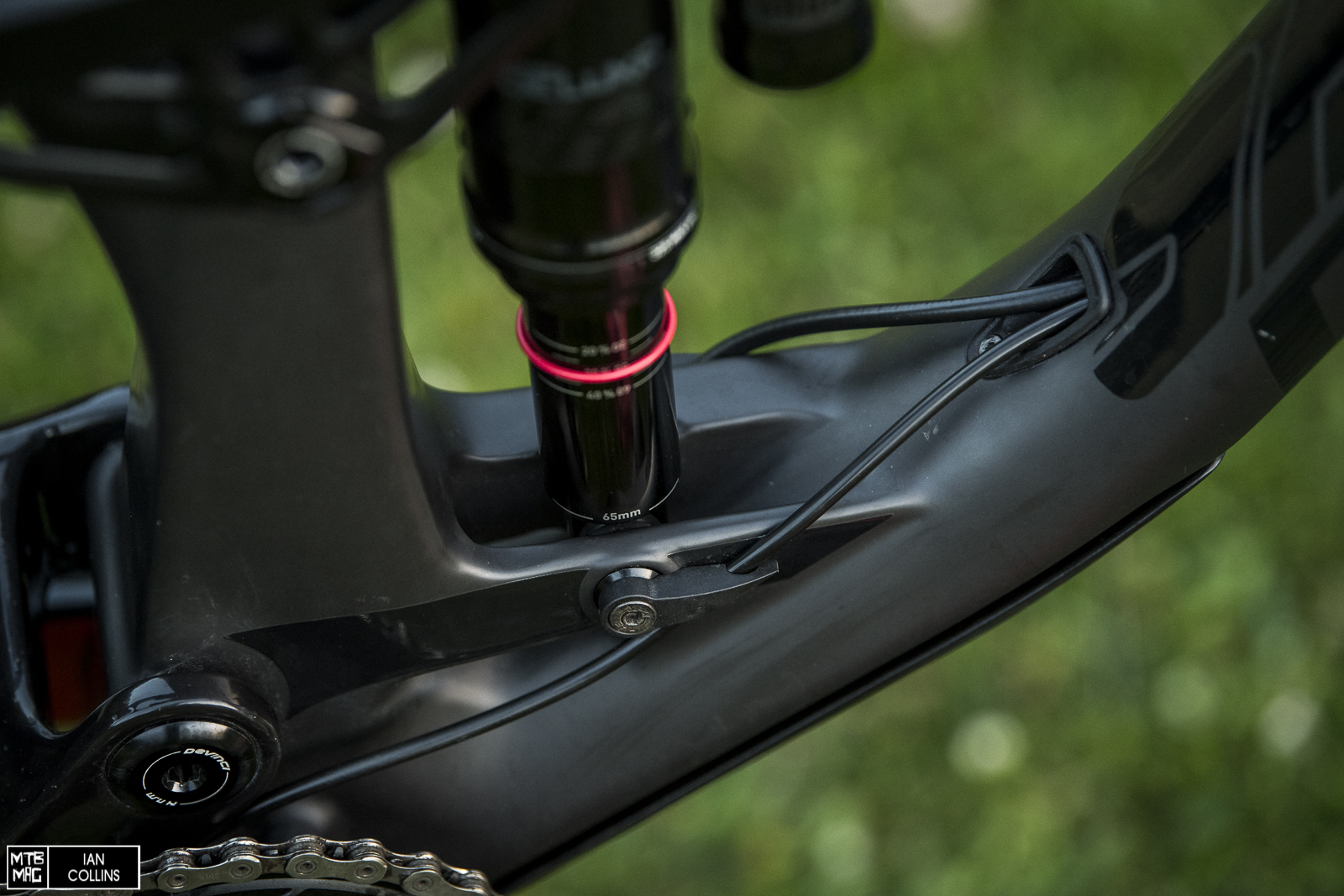 I’m typically not a huge fan of fully internal cable routings as they make maintenance more of a hassle. That said, I think that Devinci aced it with this bike…It’s so clean, just look at that! The ports are quite large so it’s not that difficult to fish cables in and out of them. The tabs on the lower shock eyelet keep them from moving, and in turn,  this bike is ridiculously quiet. 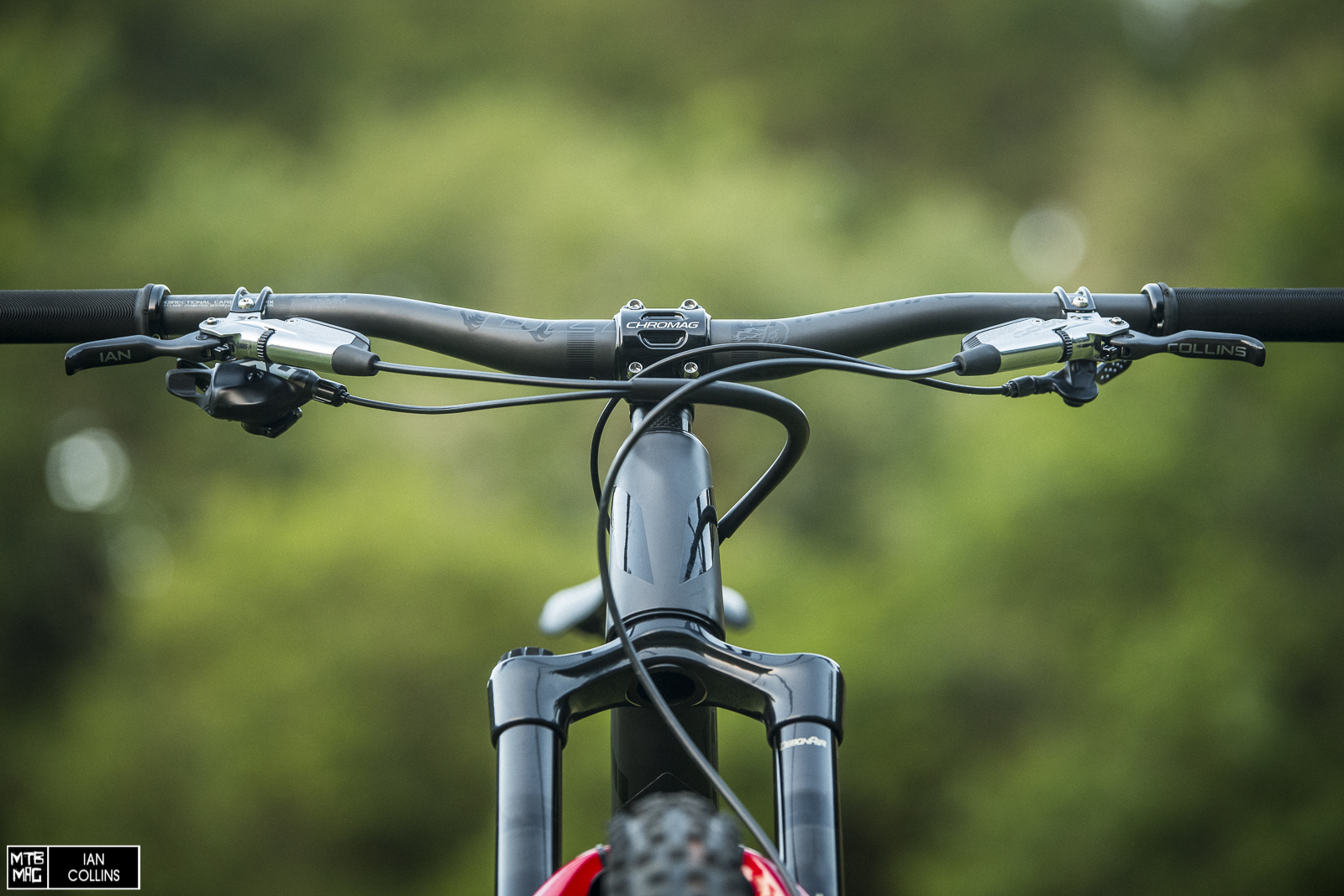 SRAM was nice enough to send me a set of Codes RSC brakes that I’m just going to “Code Ultimates”. They’ve got carbon fiber lever blades and red calipers that match the Lyrik. The ex-racer kid/fan boy in me feels like I’m on the Blackbox program and they say “Sam Hill”, but in reality, I’m definitely not even close to worthy. Moving away from the nostalgic part, the Code RSC’s are the best brakes that I’ve used to date, and they’d be on this bike whether they had my name on the levers, or not. 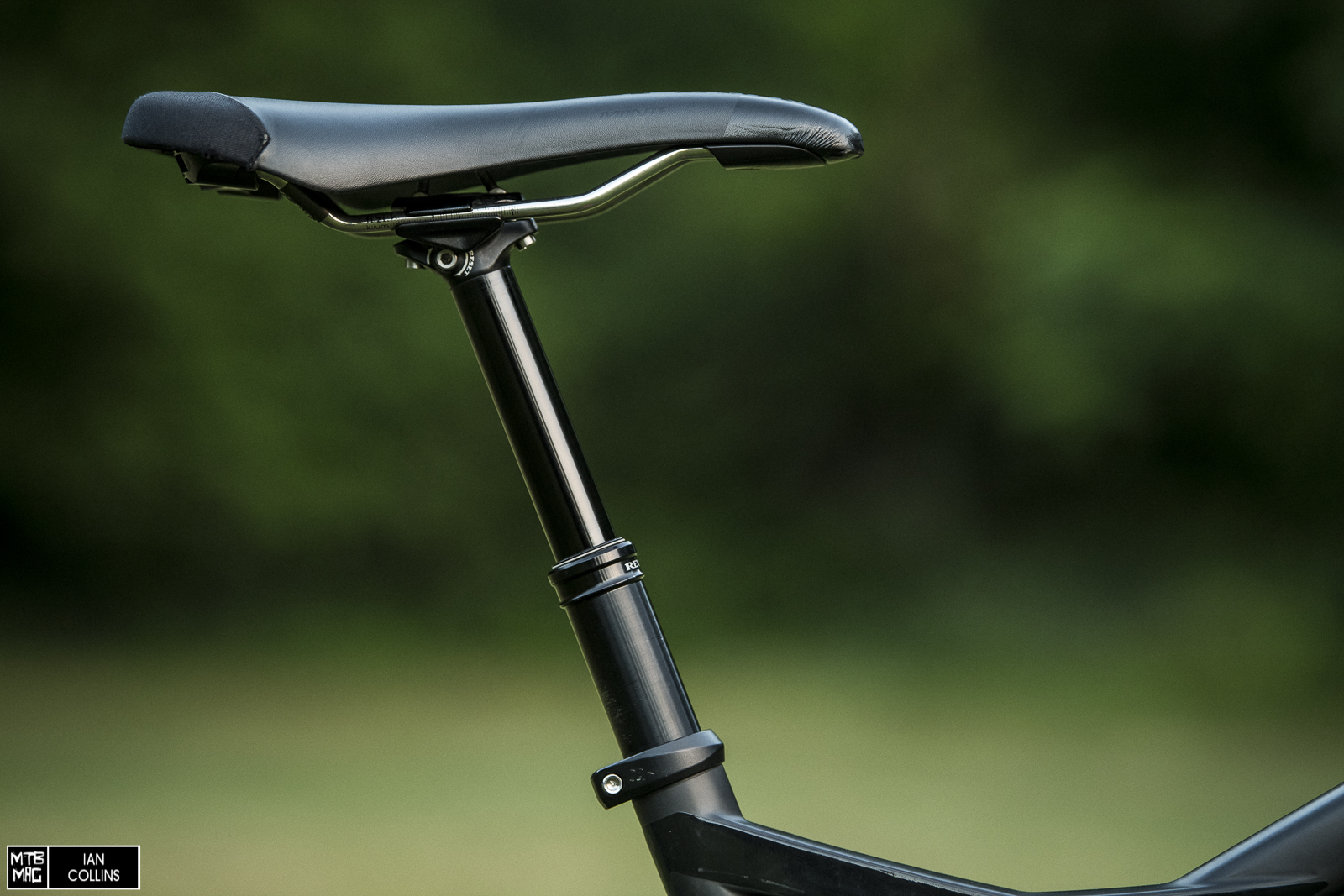 It’s not pictured fully extended, but I really like the BikeYoke Revive dropper. It has a whopping185mm of travel and can be reset (read: bled) in ~15 seconds via a 4mm allen key. I like that it has a nice, smoothly damped return speed so it doesn’t ever punch me in the nuts. I ride a lot of really, really steep trails and have very long legs, so above all, it gets out of the way when I need it to. Gotta protect my personal bike! I take pretty darn good care of most of the bikes that I test, but on the rare occasion that I shuttle, I can’t have the down tube get mangled by a tailgate pad. Therefore, I put a lightweight AllMountainStyle down tube guard on it to keep it fresh. 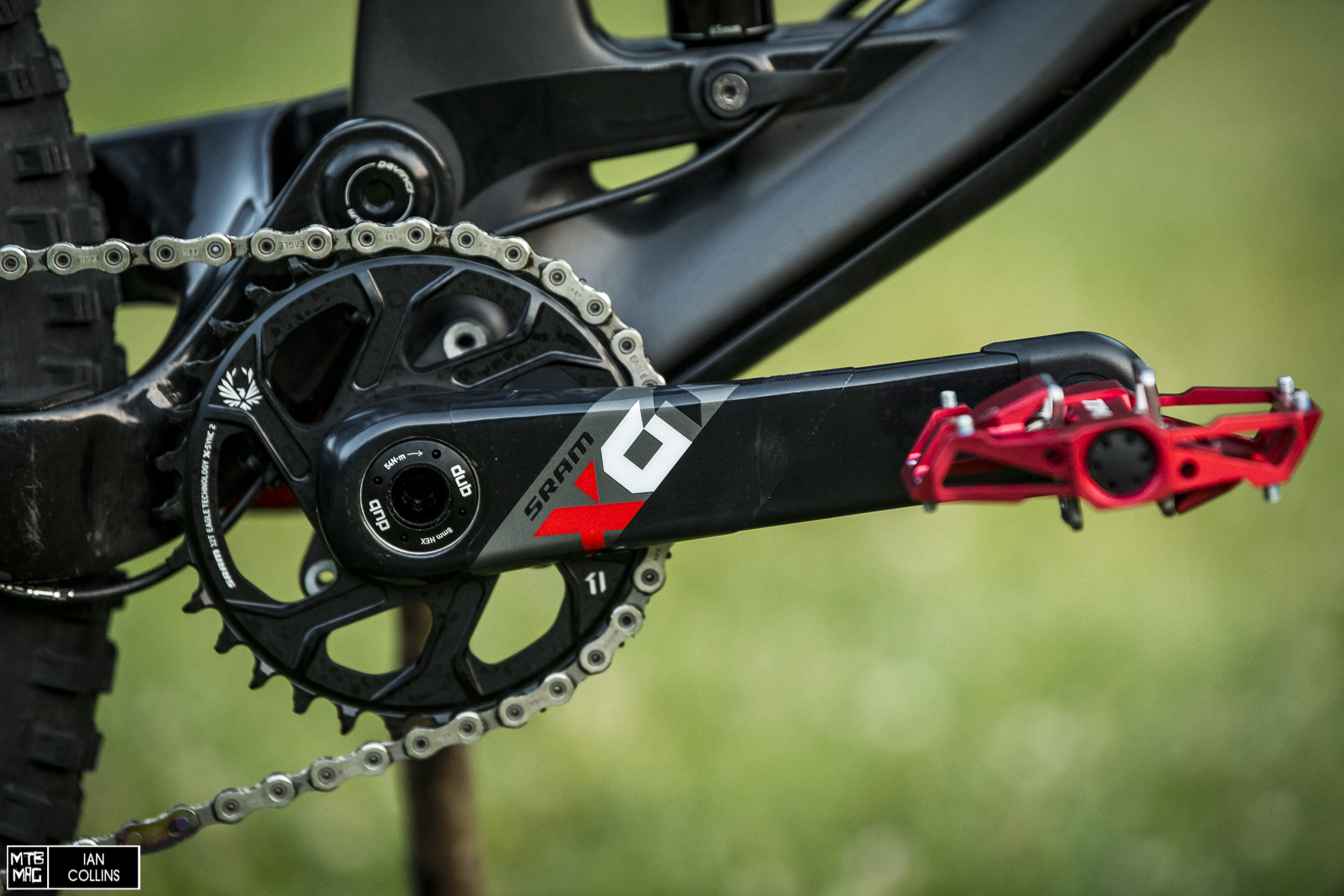 I’m on board with DUB. The haters and skeptics out there can belly ache and moan about a new “standard” all they want. In my eyes, the bottom line is that if you buy a nice set of SRAM cranks, you can now move them over from bike-to-bike-to-bike, regardless of which bottom bracket it uses. At worst, you’re only set back by a few bucks for a fresh BB, which you should probably be installing on a new bike anyway. On top of that, both bikes with both press fit and threaded BBs see a bigger, more robust axle and an improved BB. Rant aside, I chose a 170mm length for some added clearance. 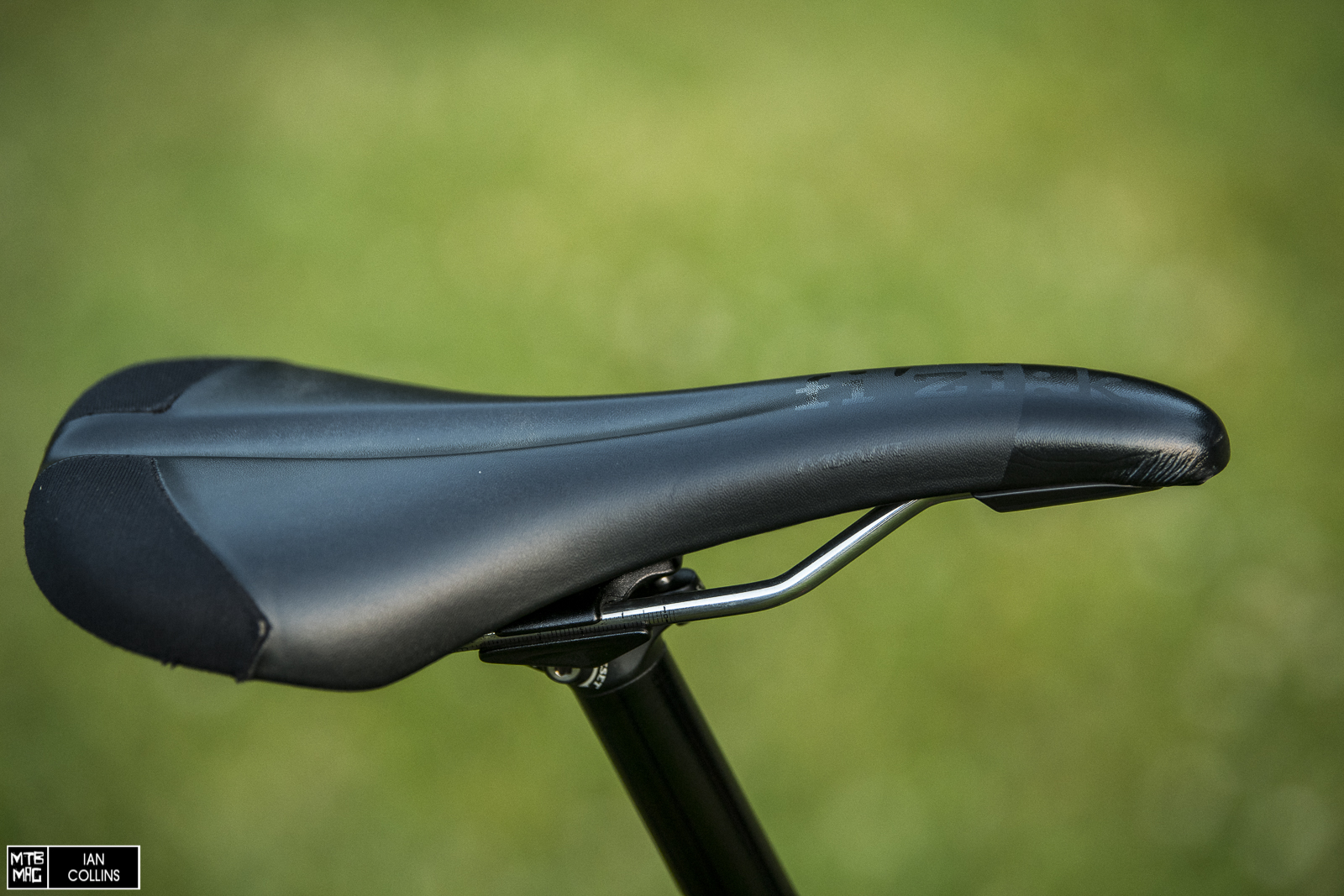 The Fi’zi:k Monte saddle as become one of my favorites over the years. I used to run a WTB Silverado on most of my bikes, but feel that this is more refined and a bit tougher as well. The rounded nose and wide tail just work well for me. I’ll admit, I’m an unabashed fan of Time pedals. When they announced the ATAC Speciale with a once piece body and traction pins, I had to get my hands on a set. I’ll be running a long term review on them in the future, but so far, despite their high price point, I’m quite a fan. 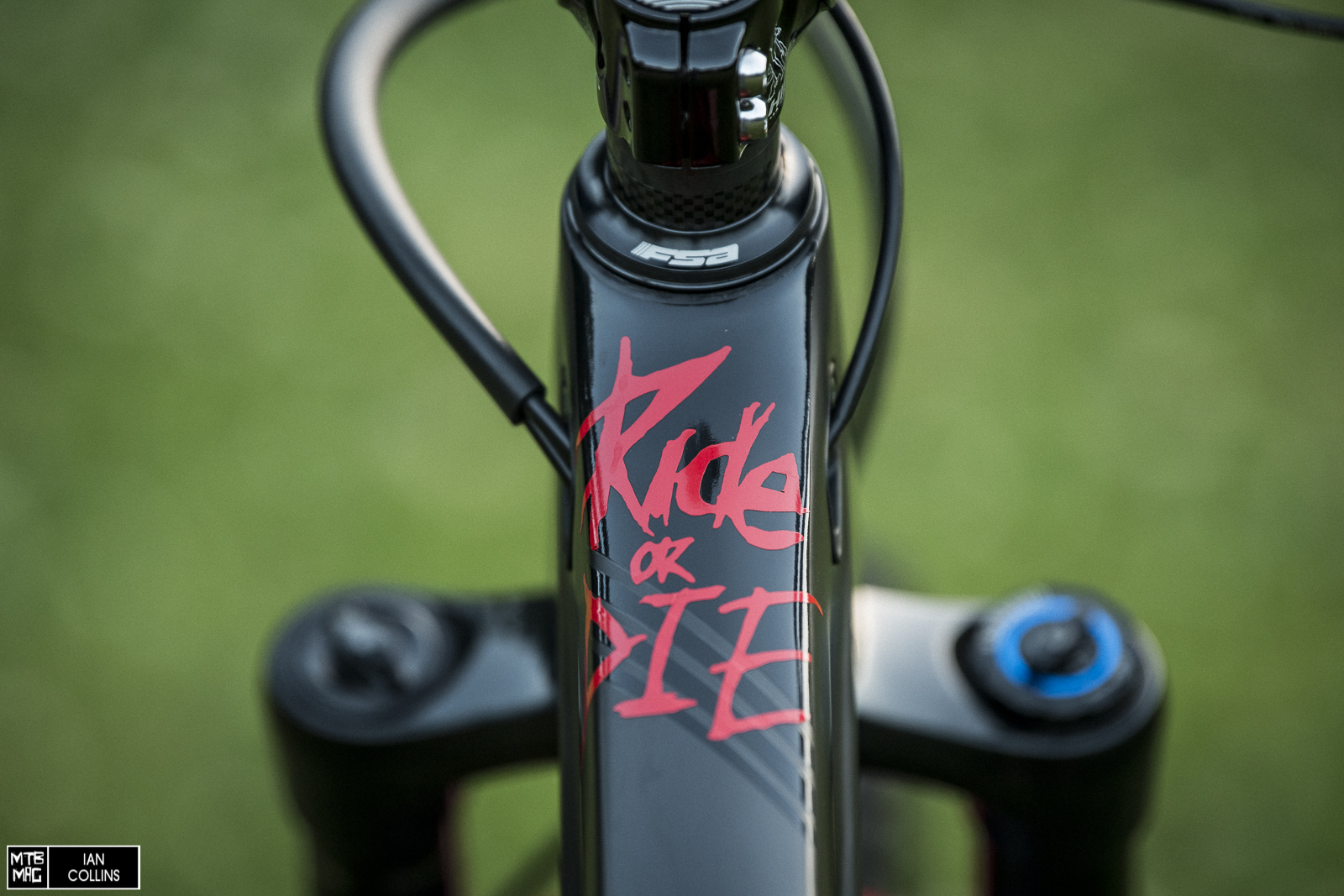 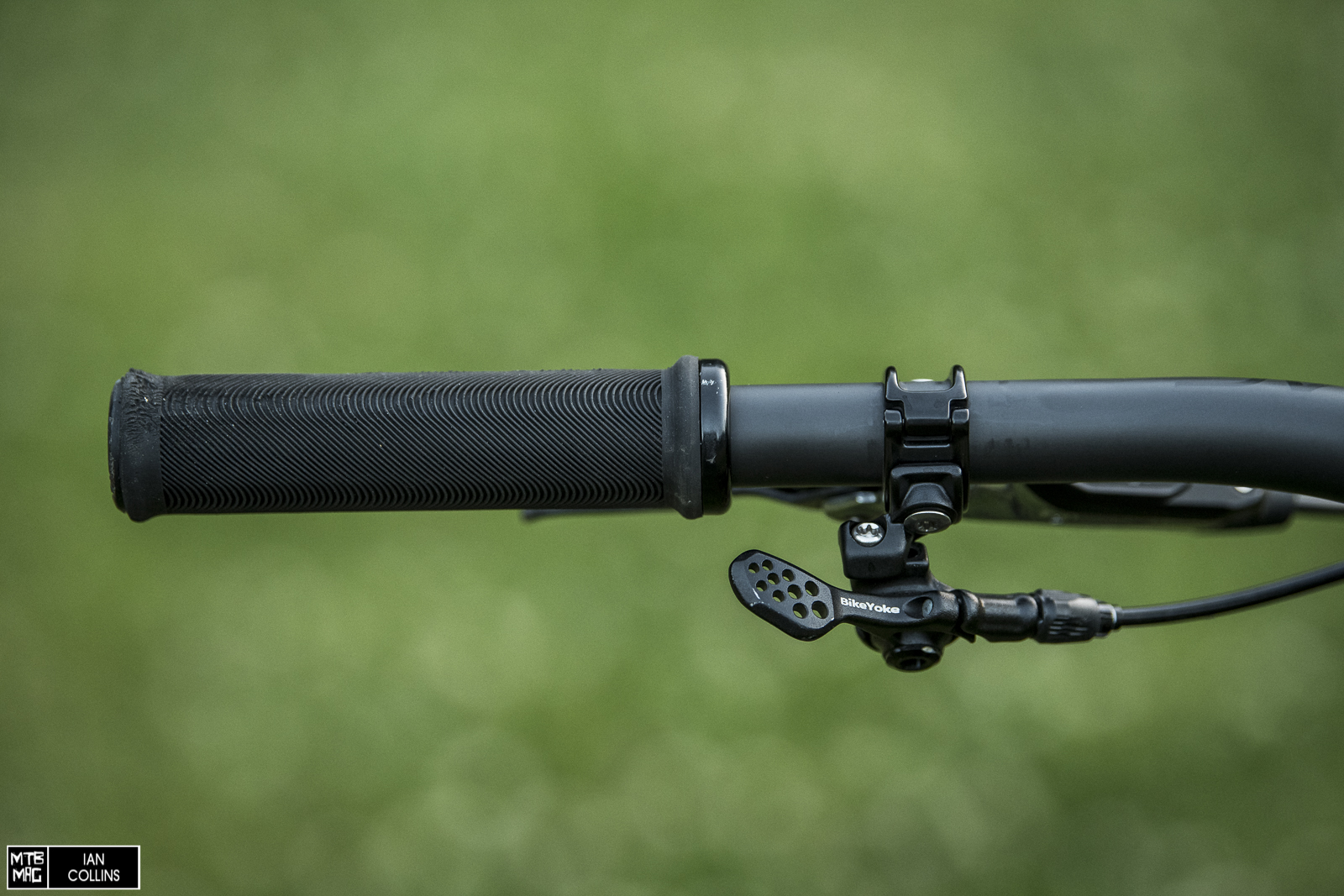 Sensus Lites. I like thin, single clamp, lock-on grips…And so, these are the go-to choice. Just the right amount of crush. 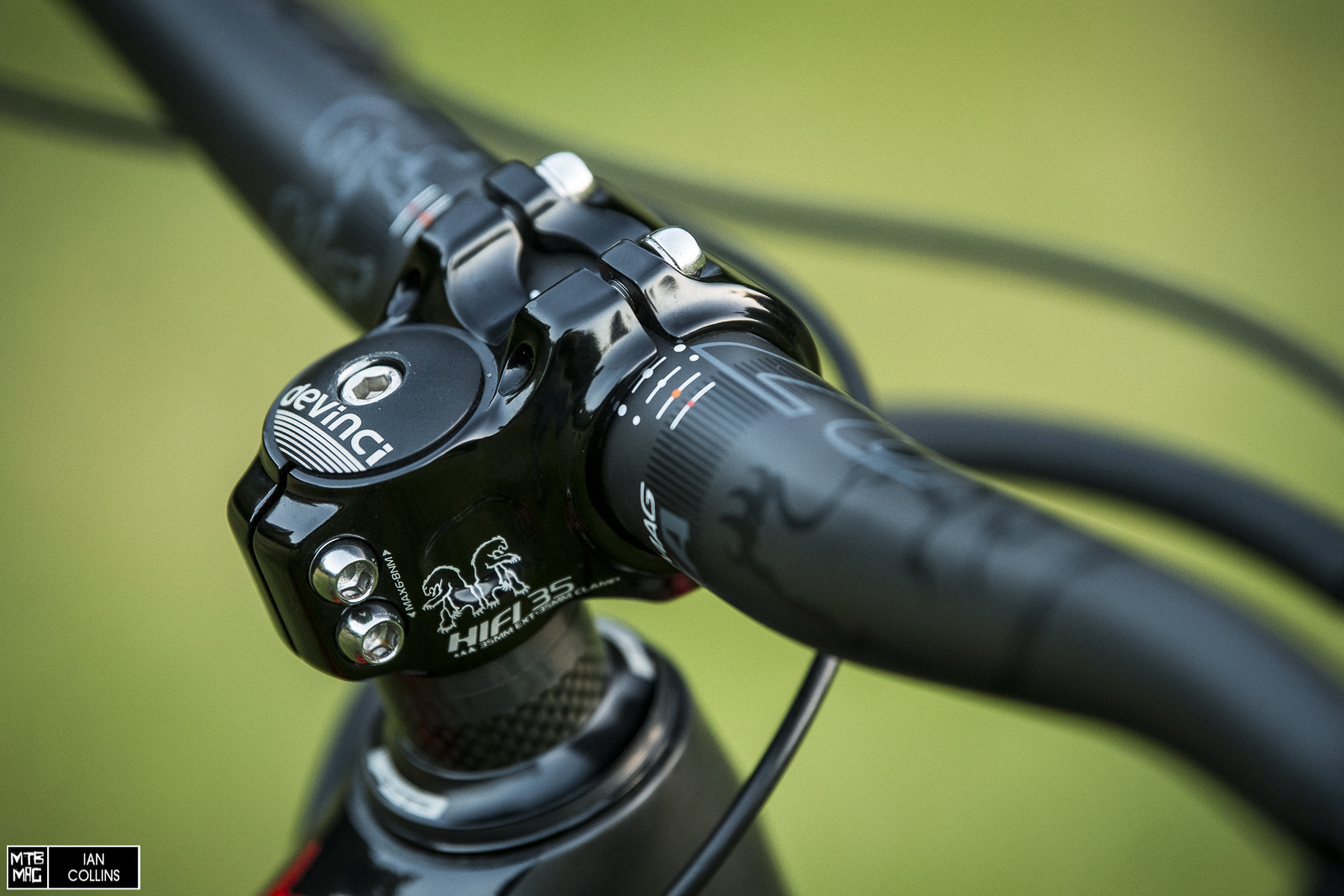 I was pretty set on a 35mm length stem for this bike, so I chose the Chromag HiFi with a 35mm clamp. I paired it with a carbon fiber BZA stem and leave it at the full 800mm width. I’ve ridden quite a few carbon fiber handlebars and think it takes the edge off more than most. I dig the upsweep/backsweep combo as well. 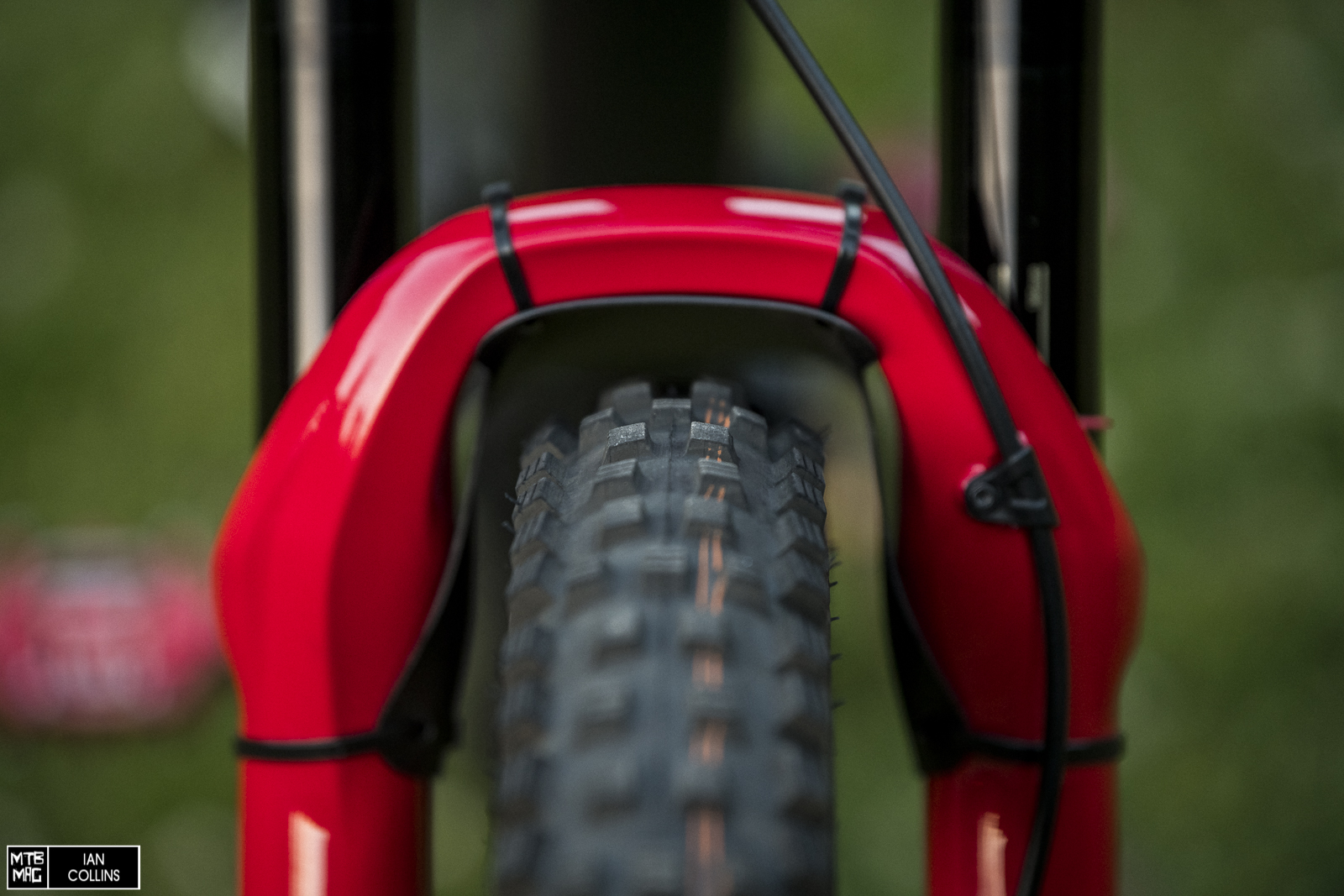 I’m a huge fan of the Schwalbe Magic Mary. Prior to discovering them, I typically changed out my tires frequently. I rode one particular tire for loose, loamy conditions and a completely different tire on hardpack, rocky trails. I’m not the only one who thinks that Magics are the best in both of those very different sets of conditions. It is truly a game changer. 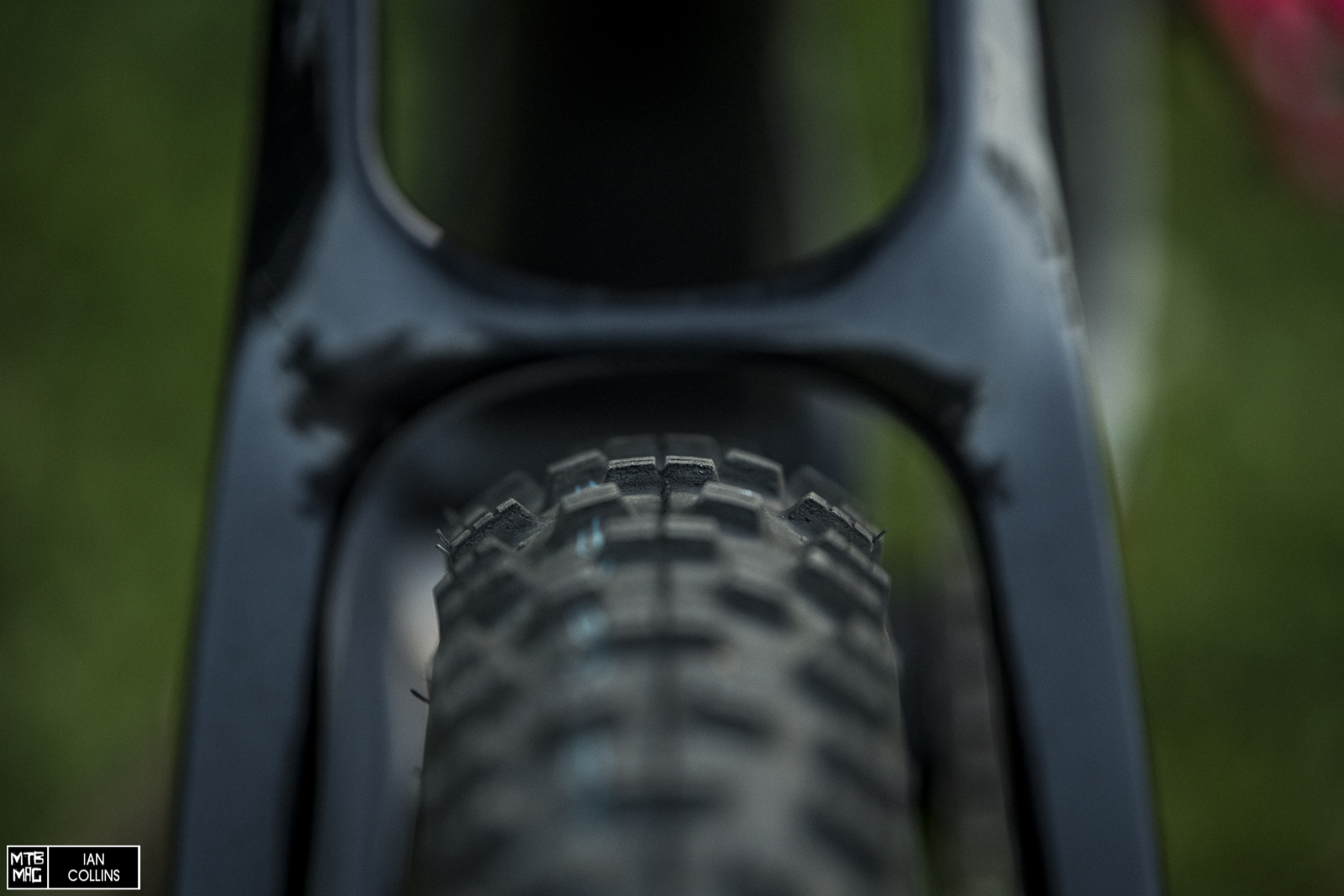 I chose a Nobby Nic to run out back. In the past, the Nobby Nic didn’t have the best reputation. Last year, Schwalbe overhauled their entire tire line up and introduced a completely new range of compounds, dubbed Addix. I’ve been spending a great deal of time on everything from Mud Spikes to All Arounders and have been blown away so far. I run a “Soft” tire up front and a “Speedgrip” out back. I’ve seen no premature degradation and no ripped knobs, but have been really happy with the well balanced compounds. 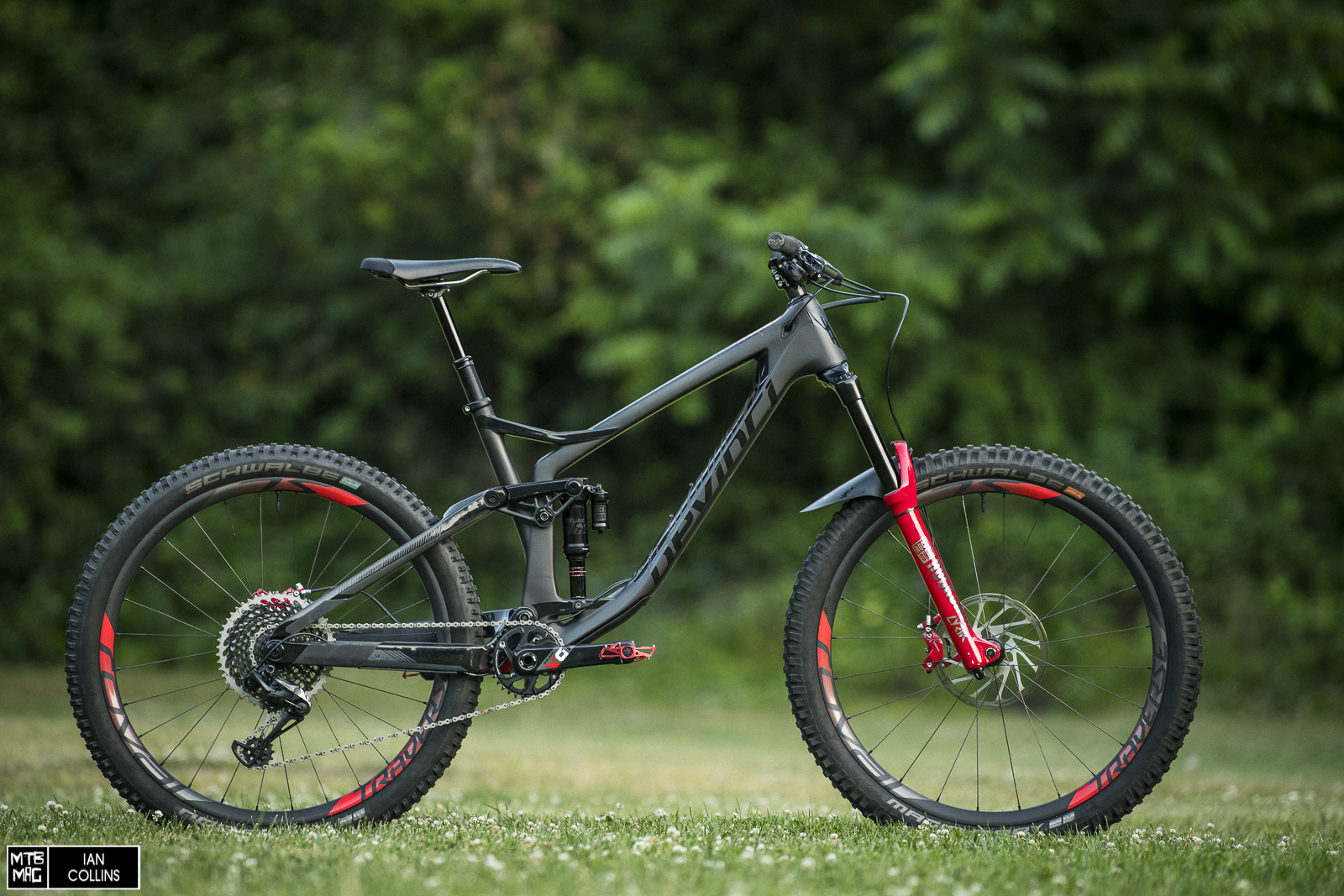 Thanks for checking out my bike! If you have any questions, feel free to leave them in the comment section. Keep in mind, long term reviews are coming on a handful of the parts featured on this bike…