We recently got ahold of a surprising new kit from E*Thirteen. It’s a 12 speed conversion kit that works with 11 speed SRAM drivetrains. It’s officially being announced today, but we got one a couple of weeks ago and got a couple of rides in on it. In short, it’s a wide range 9-46T cassette, a chain and a couple of replacement parts for the shifter and rear derailleur to facilitate the conversion. Here’s a closer look… 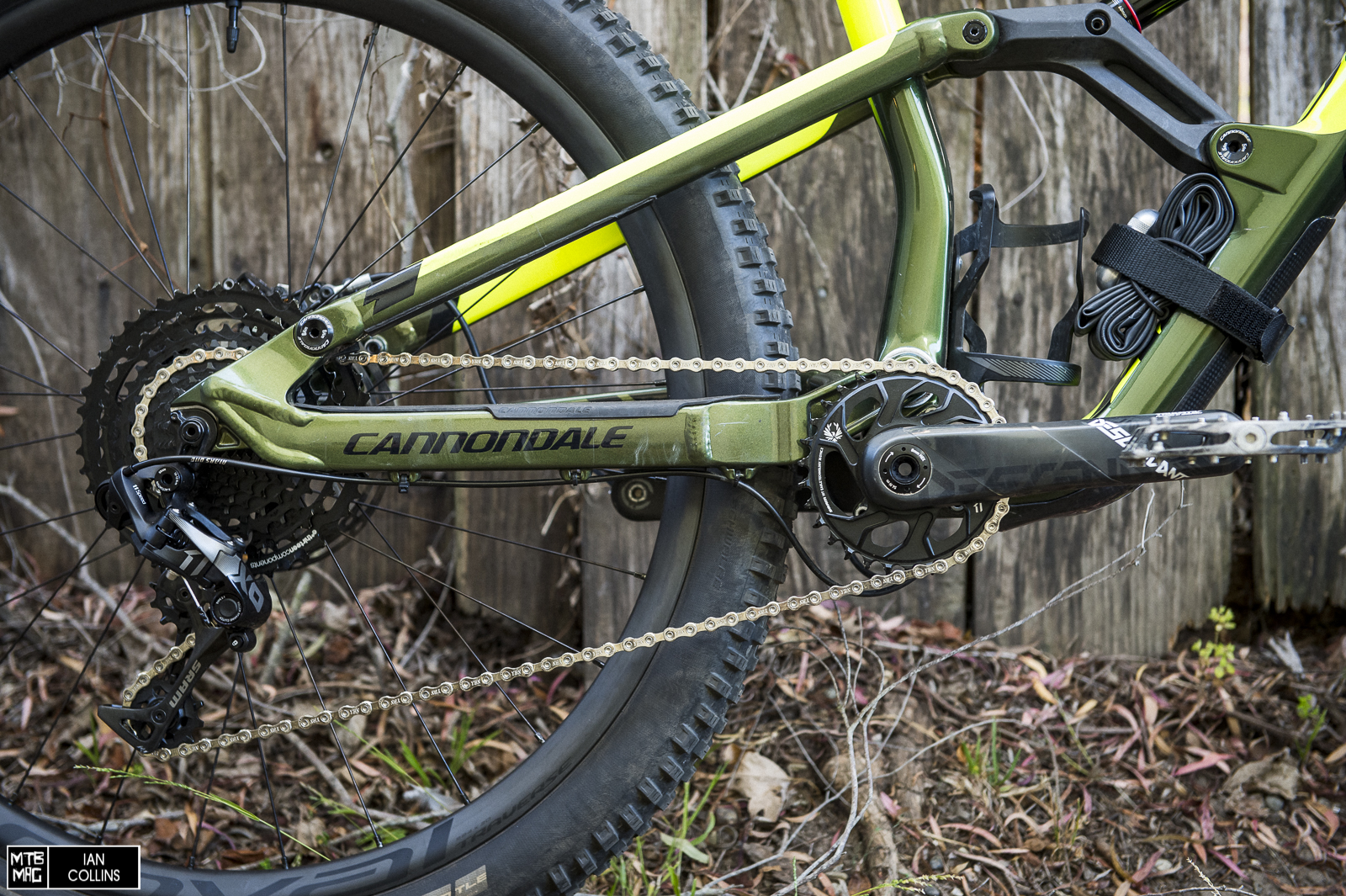 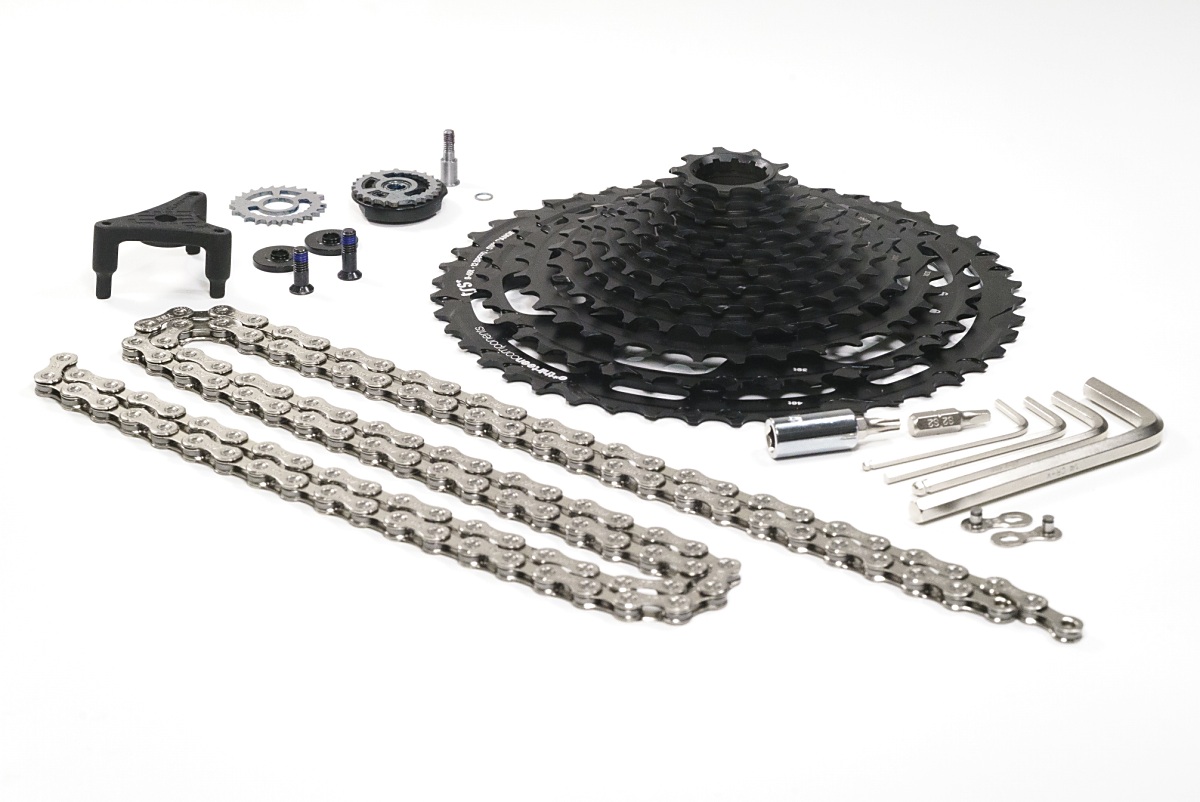 Everything that arrives in the package…It comes with tools and all. 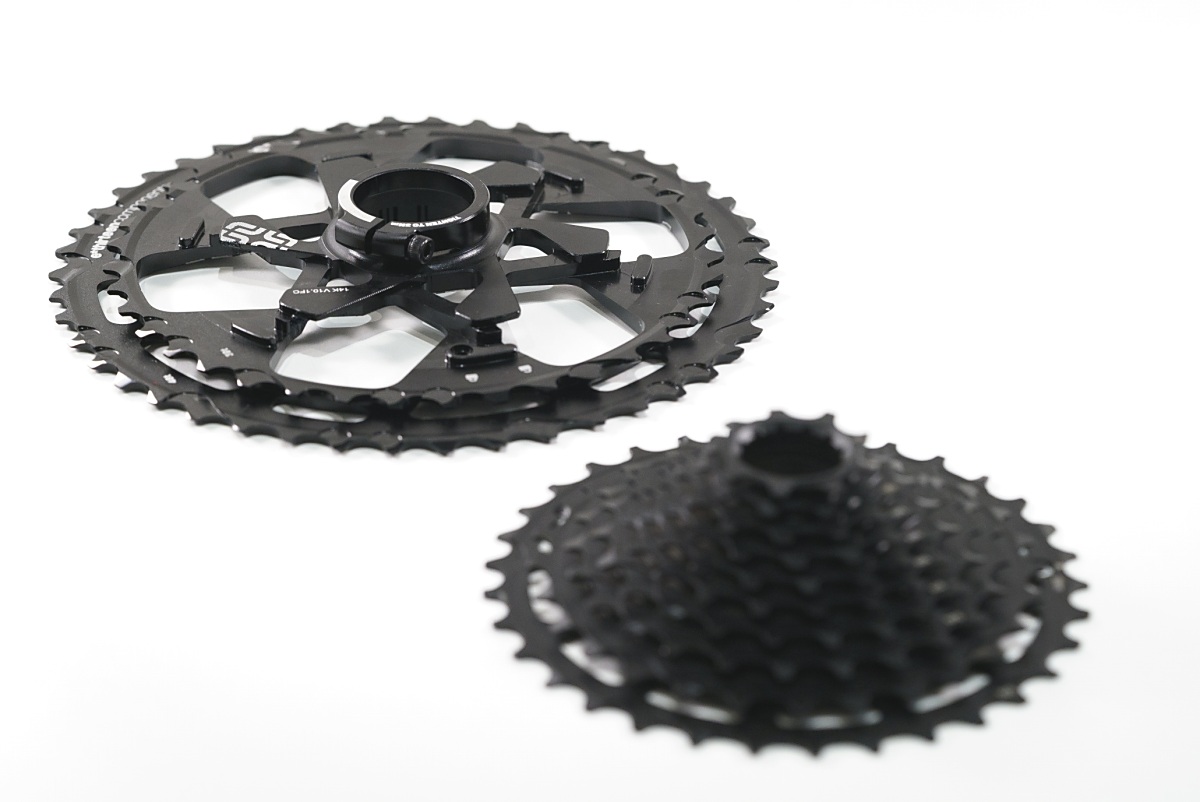 E*Thirteen updated their two piece cassette with a much smarter design. The largest two gears are aluminum and are secured by a lockring. The remaining 10 gears are a one piece steel block that locks onto the big gears similarly to their old system, but it’s now secured by a set screw for added security. 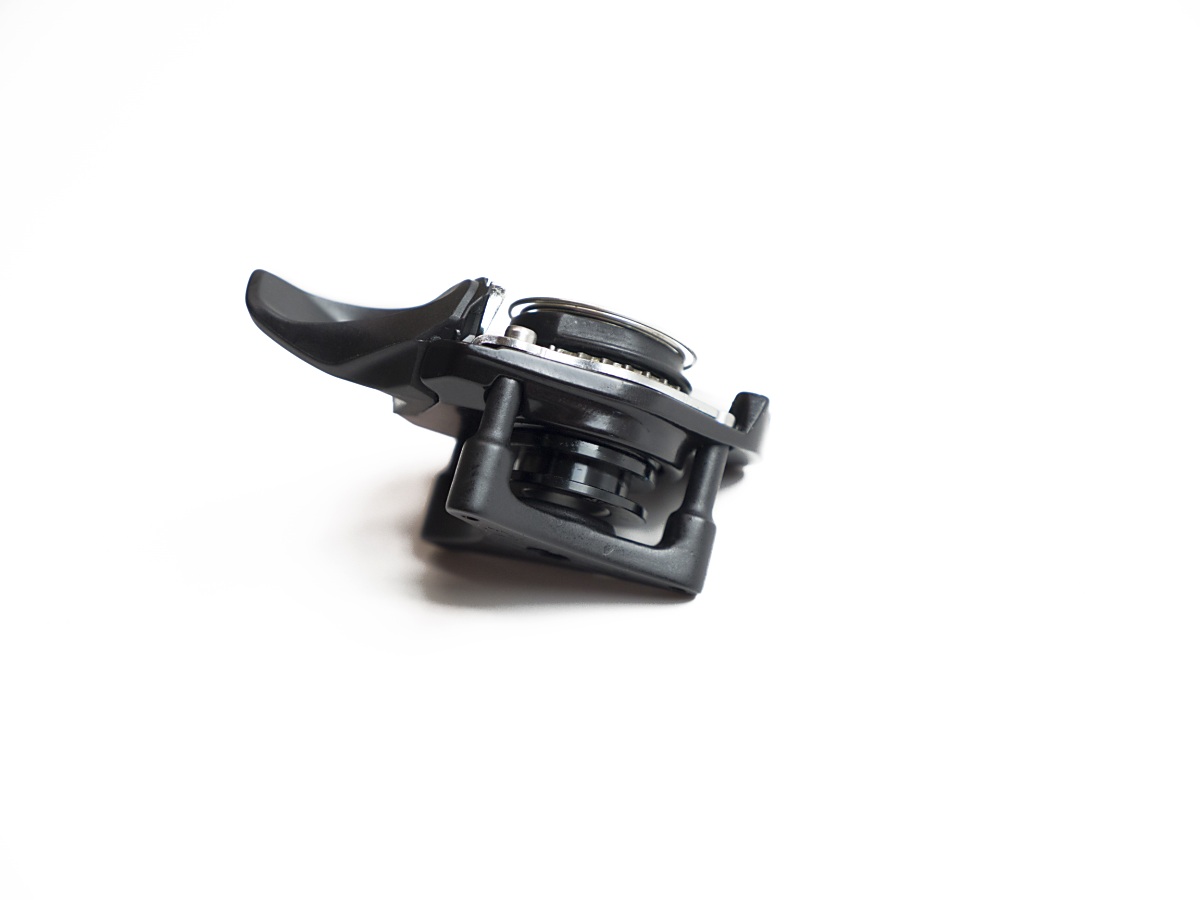 Using a tool called “the claw”, you pull your 11 speed shifter spool out for the included 12 speed spool. Simple enough. 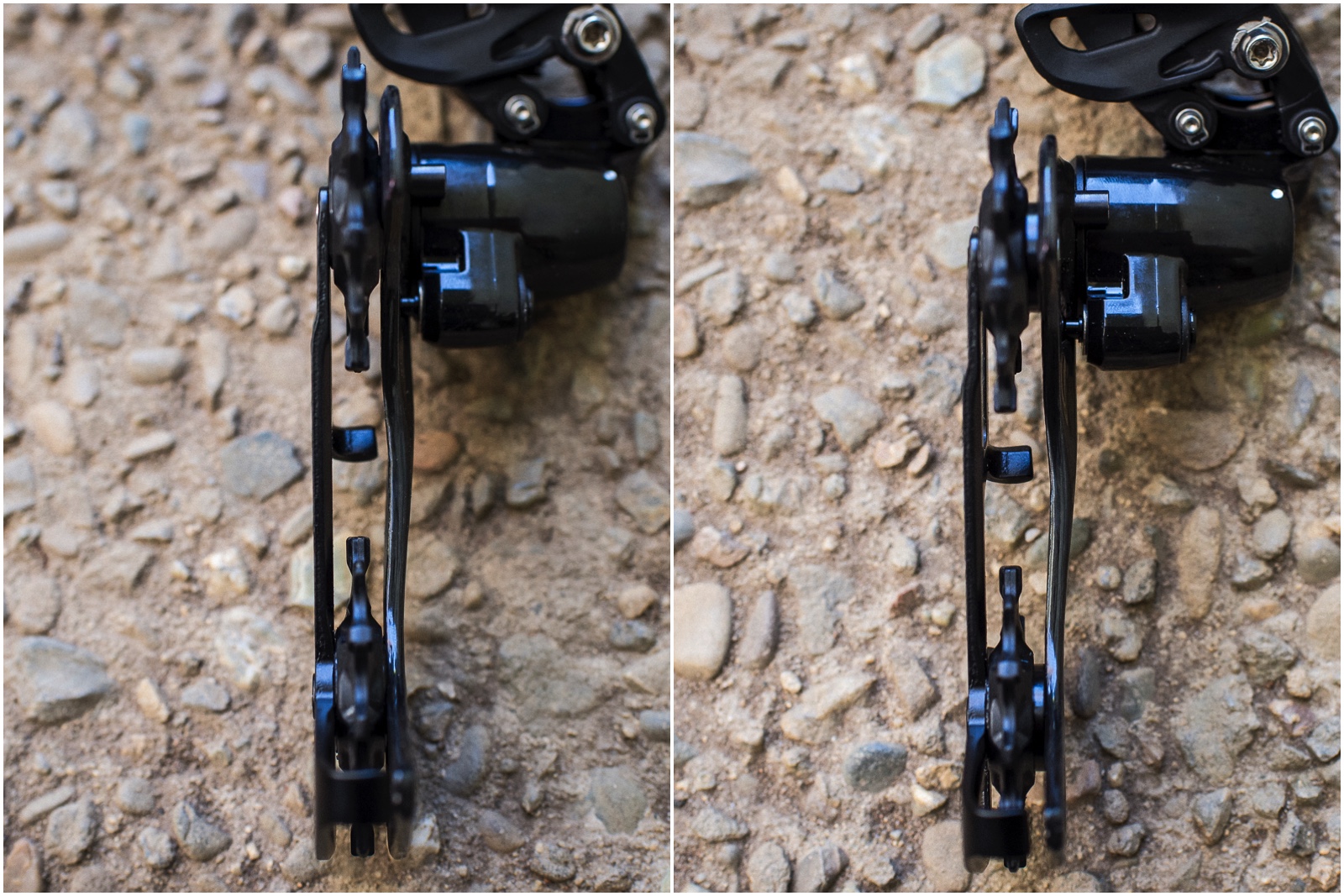 You also replace the outboard derailleur pulley spacers out with a wider set and their respective longer bolts. This allows the derailleur cage to reach the largest gear. It’s also quite a simple install…

The installation is straightforward if you’re a fairly good mechanic and you follow their instructions well. The included 12 speed chain uses a standard style master link and arrives with plenty of extra links for most setups. It’s worth noting that we were using an XX1 shifter, which doesn’t require the claw. 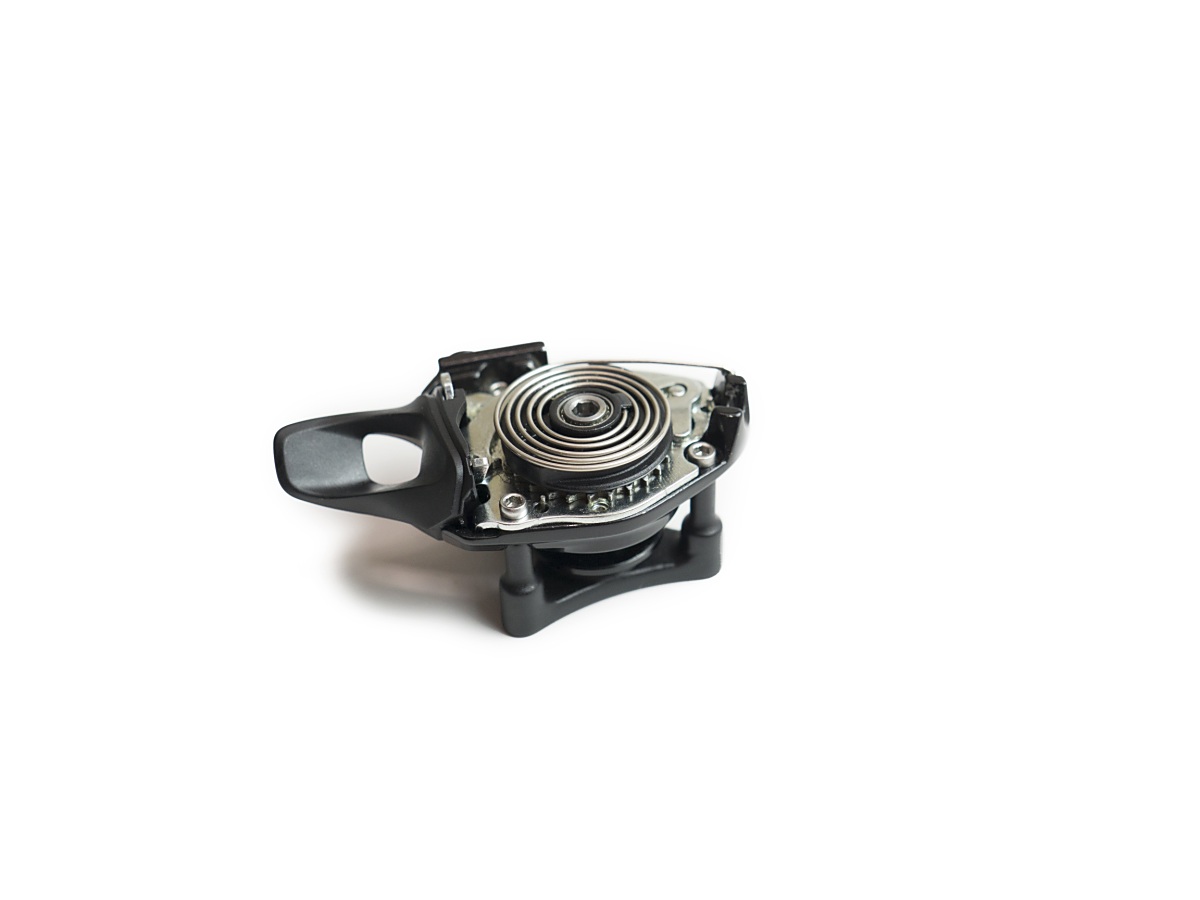 Our one hang up was that we were apparently a bit ham fisted when tightening the shifter up after installing the new spool. The spool rotates on very tiny, delicate bearings and ours got roached in the process, leading to shifting that lagged quite badly. We pressed them out and swapped them for the bearings in our original spool and all was well. Basically, just tread lightly and everything will be fine. Aside from that, everything else is a breeze to install. The updated locking mechanism on the cassette is a huge upgrade from past E*Thirteen models as well, by the way. Another facet worth pointing out is that the chain *seems to be extremely high quality, although time will tell. 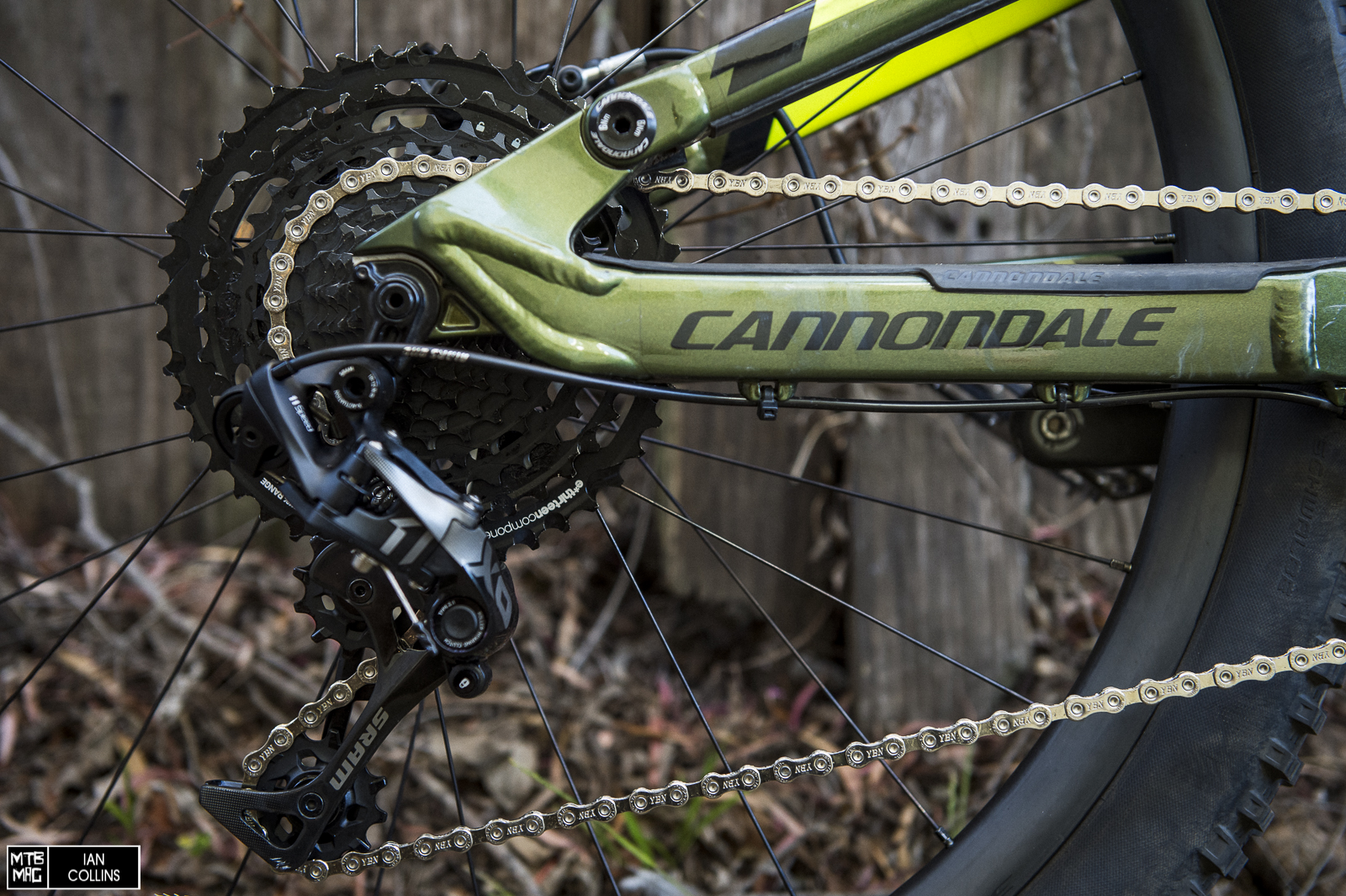 As we are well familiar with 12 speed drivetrains and the fact that they can be a bit fussy, we took extra care in the setup, and went through all the right procedures. A new cable, plus freshly trimmed and lubed cable housing is a good start. We opened up the housing ends nicely and used aluminum housing ferrules. All of these things and a nice straight derailleur hanger help improve shifting in general, and we’d recommend that with any drivetrain, but emphasize that it’s paramount with 12 speed.

Anyhow, once everything was on, it was time to ride. Admittedly, we only got two rides on this new system, so we’ll have to see how it holds up in the long run, with a more exhaustive review. Here’s what we observed…The shifting is faster and more crisp than the 9-44T E*Thirteen 11 speed cassette that we’ve used in the past. Perhaps improved ramp and tooth profile are due some credit. The shifter takes on a bit of a different feel. It’s still quite positive, but the clicks don’t feel exactly the same. It’s hard to put a finger on, but neither good, nor bad. One issue that we encountered was that the shifting between the 9T and 10T lagged really badly. We reached out to E*Thirteen marketing guru Conor Bondlow for his official word on the matter. To paraphrase his words, they’re taking a closer look at the machining process and shift ramps on those cogs in particular with the possibility of making improvements to them. As for the shifting between all other gears, everything was impressively fast. 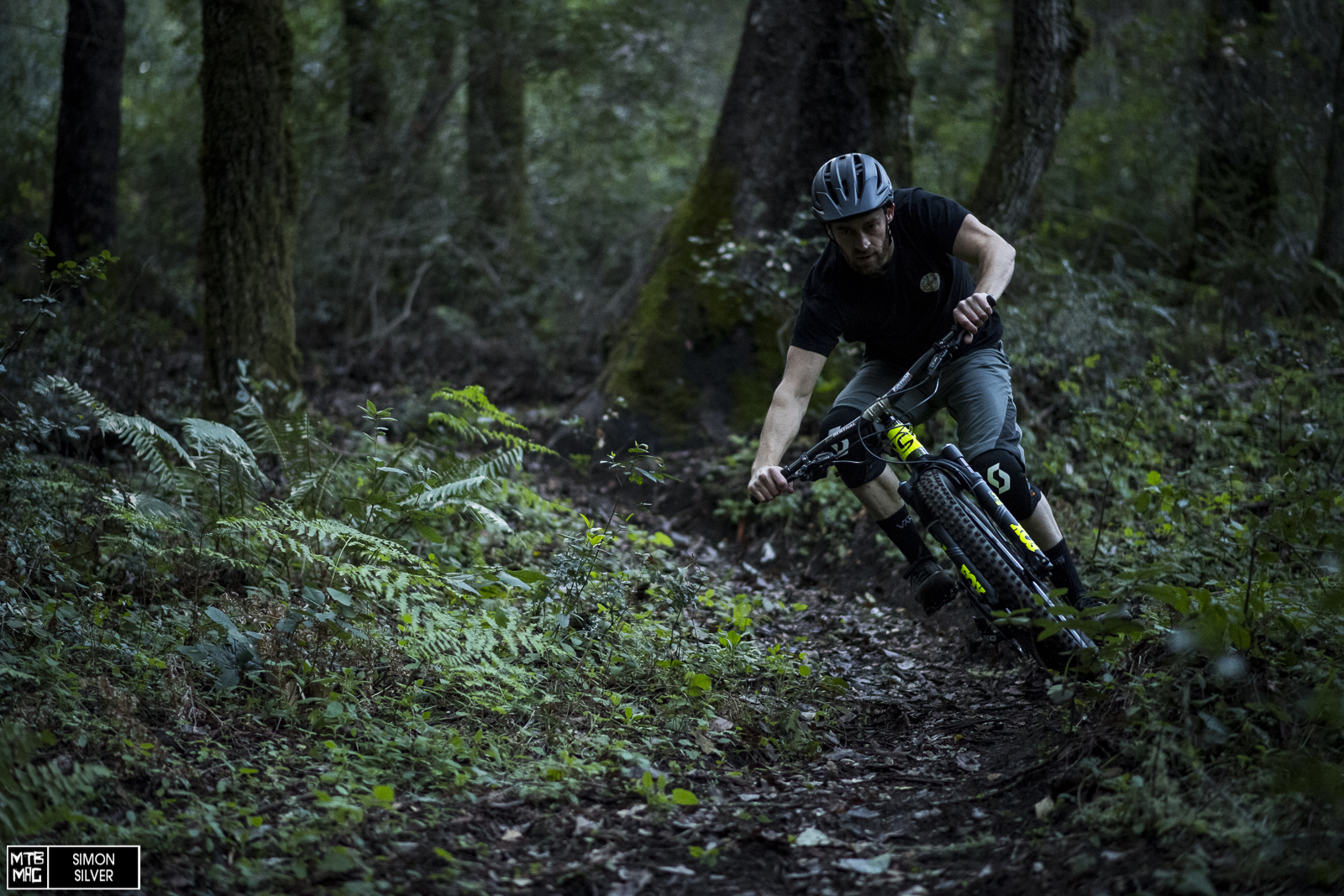 We removed Eagle from our test bike in order to test out this group, which is useful for comparing and contrasting. Although there are many advantages to Eagle, perhaps the biggest is how well the gearing is spread out. Compared to wide range, 11 speed hop up kits, it’s easy to settle into the right cadence when pedaling. What’s interesting about the E*Thirteen kit is that it solves some of the problem with broad gearing and limited gears, but at the same time offers a nominal 11% more range than Eagle, which in turn somewhat mitigates how tight the gearing becomes. The range is huge, which is great and all, but it will take some big, tiring days in the saddle to see if this drivetrain leaves us feeling like we’re wanting that “in between” gear. That seems doubtful though.

Compared to the average wide range, 11 speed hop up kit, we think that this is likely a better option. It will take some time to fully make the call on how this kit compares to Eagle on the whole. At the moment we think Eagle is a bit more refined, but we can say that this kit is extremely well thought out and quite budget friendly. It’s worth noting that it also allowed us to run a 30T chainring and get a load of additional clearance, which is cool. The shifting in generally is quite good, save the nagging 9-10T jump. Stay tuned for the long term review.