I first received a SRAM XO1 Eagle AXS upgrade kit for testing two years ago. In due course I published a shorter term test on my findings with the intention of following up again after about one year of ride time. Well, as they say “time flies when you’re having fun” and it’s been two years now, so this article is a little late. Here we go… 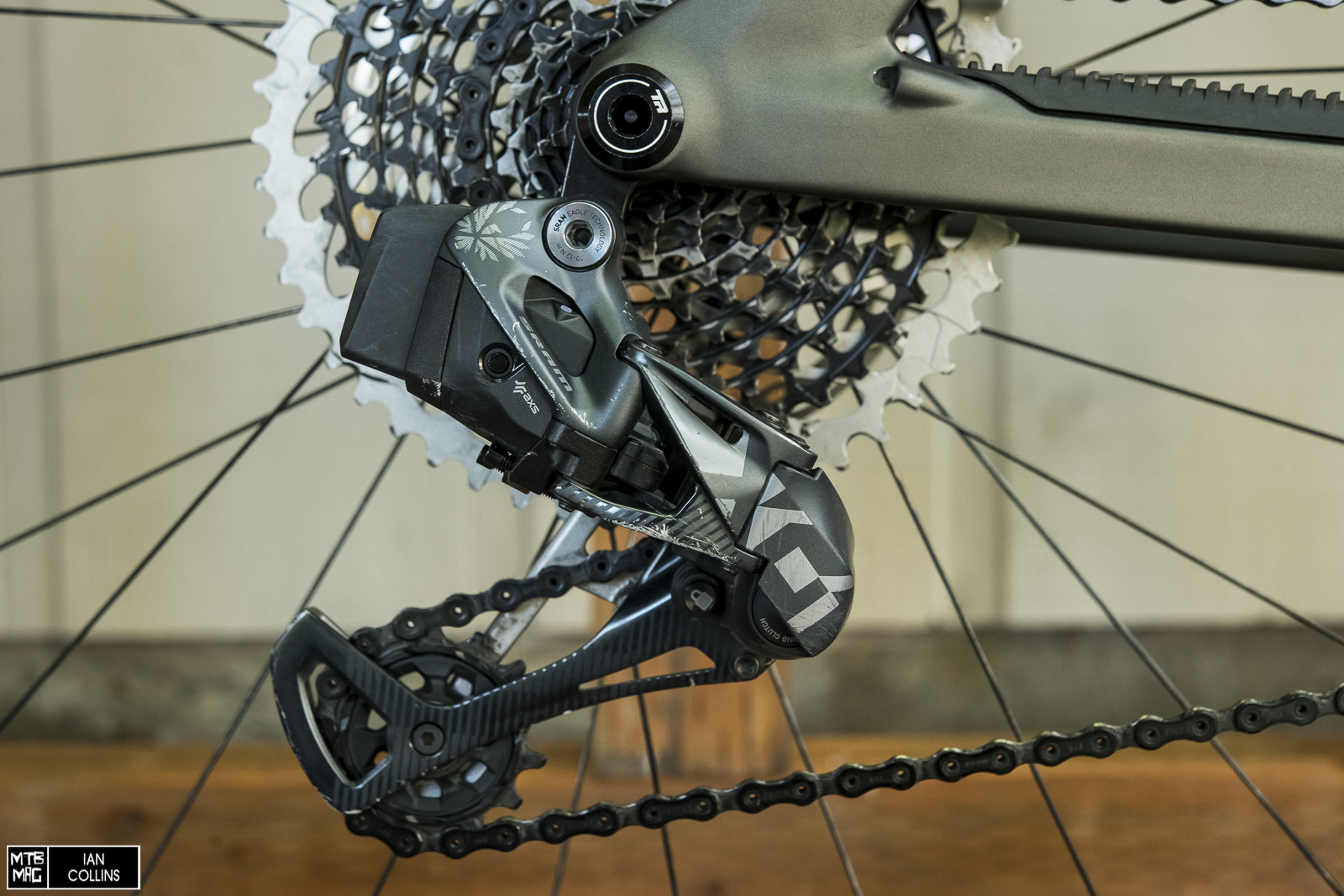 This derailleur and controller has been on a handful of personal bikes over the last two years and thus, has seen quite a bit of frequent abuse. In fairness, I do spend time on multiple test bikes day to day, so I haven’t exclusively ridden this setup. Given the amount of waves AXS made in the industry, and with SRAM’s claims of unprecedented strength and durability for a derailleur, it seemed like interesting content to circle back on the long term findings, now that this particular combo has seen a load of ride time. The purpose of this article is more to point out some interesting aspects I’ve noted over the years and to report back on the durability. For a more incisive look at the AXS upgrade kit from a features/performance standpoint, you can check out the initial review here. 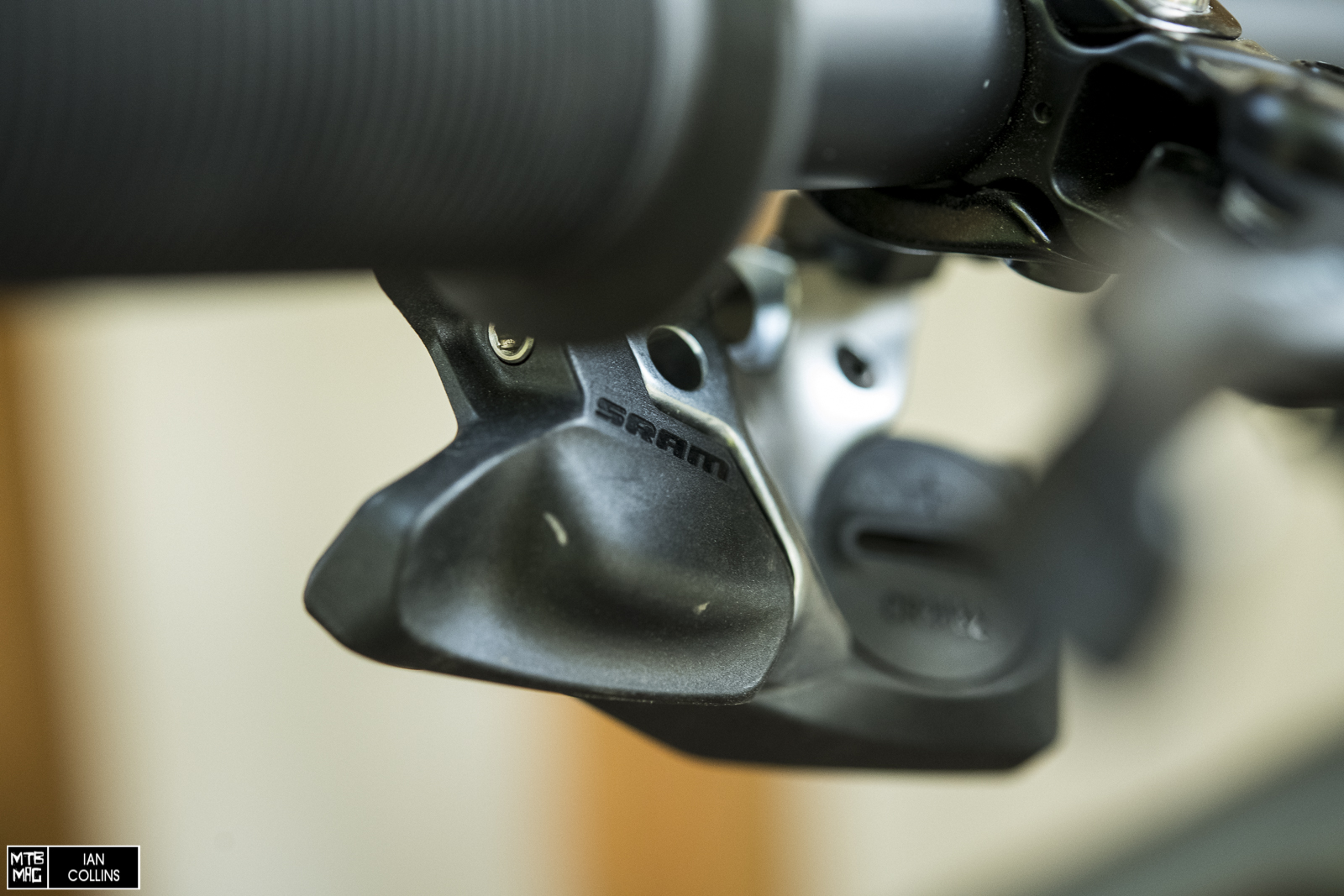 With the introduction of electronics into the drivetrain world, and likely more commonly in the suspension world soon, there will naturally be questions about battery life. Starting with the controller, after about a year and a half of use, I replaced its dedicated CR2032 battery, which can be found at most pharmacies or hardware stores and for about $2 each. You can swap it out with a coin in 30 seconds. SRAM claims its battery life is “around two years”, but I swapped it preemptively as I’d prefer that to finding out that it died the hard way. Speaking of the controller, I did swap to the – in my opinion – much improved Rocker paddle and much prefer its ergonomics over the original paddle. It’s also worth noting that if you’re having trouble getting the controller to line up the way you prefer while using SRAM’s integrated Matchmaker interface, it’s worth trying the dedicated clamp as it provides a greater degree of rotation and helps it sit lower. 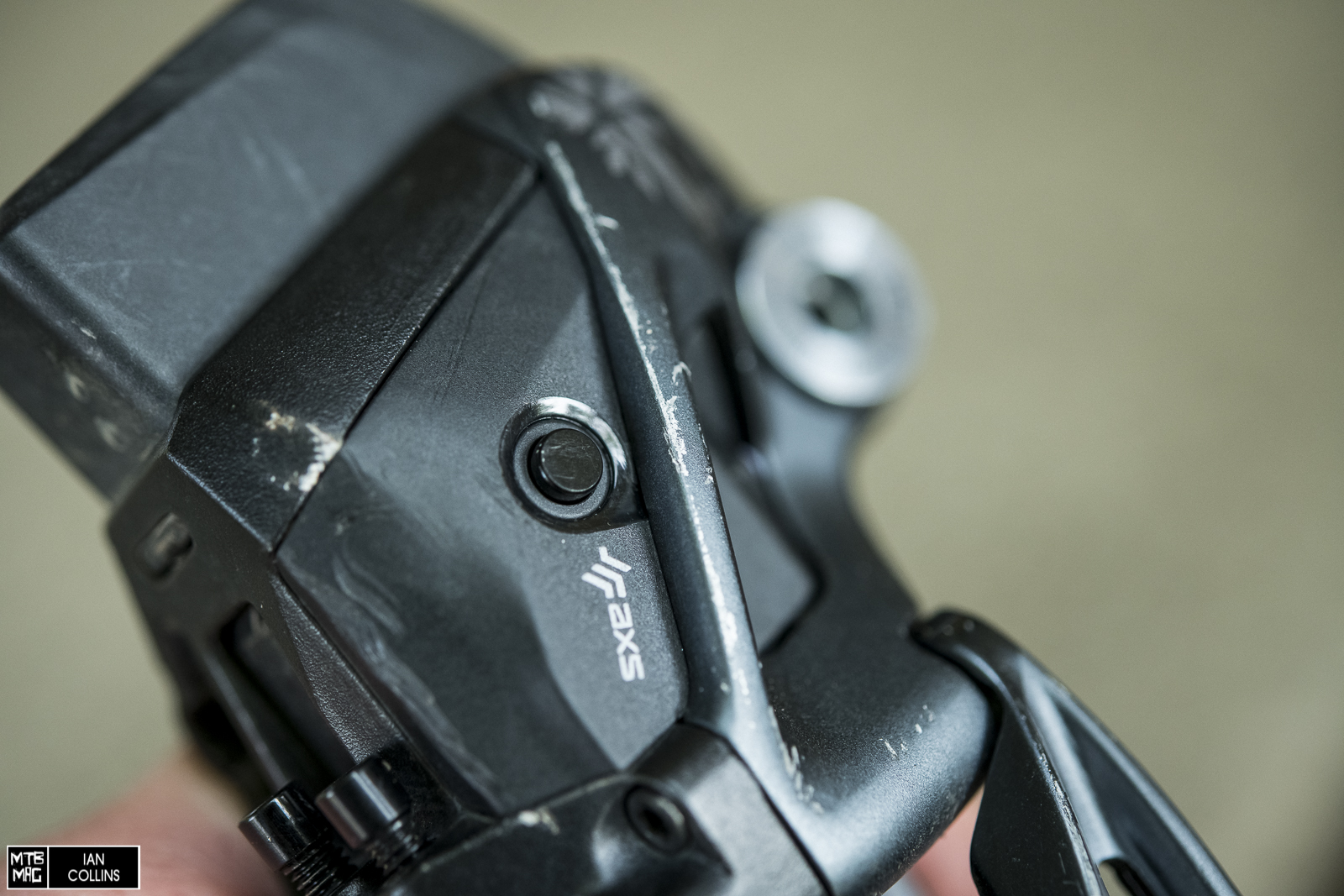 The battery on the derailleur was generally good for 2-3 weeks of frequent riding, and after one outing where I forgot to check the battery status first, it became hammered into my brain to check before each ride. I also chucked a spare battery in my truck, and you could also just add one into a tool wrap or riding pack since they are quite small. If you have a Reverb AXS, you can always swap batteries and limp home from a ride. Regardless, as for long term durability, I haven’t seen any degradation in battery life nor have I had any issues with the elements interfering with contact points or seals. That’s with rain, snow, dust and mud plus a plenty of hosings. This derailleur has had many a run-in with many a trailside obstacle and it’s still dead straight and performing better than any derailleur I’ve ever used. SRAM’s “Overload Clutch” is an interesting feature that lets the derailleur get out of harm’s way under impact. While it is interesting to see it in use, I wondered how well it would work in the real world, on the trails. After quite a few crashes, plenty of rock strikes as way too many sticks jammed into the derailleur, it’s still running as good as new. The overall wear and tear is mainly seen in the form of small bits of abrasion marks, but thus far, nothing is starting to feel loose or work any differently. From the cage’s movement itself, down to the cage lock button, everything is functionally as good as new and moving freely without any excess play. Last but not least, pulley wear has been good overall. I’ve replaced my chain twice and cassette once in this two year span, but I’ve yet to change out the pulleys – which are a simple and affordable swap. At the end of the day everything has worn well, run smoothly and not rung any alarm bells.

Thus far, we’re two years in and I haven’t missed a single shift on this system. In fairness, there have been a couple of instances where there was a slight lag, but generally that has been my indicator that I need to make a minor B-gap adjustment – something I’ll touch more on under maintenance. Regardless, the actuation and shift quality has been far superior to any cable system I’ve used and I think some of it comes down to the systems power and baked in precision. There is no cable to flex and no strange bends in the cable housing causing friction. These are some of the factors that may not come to the fore at first, but they play out well and pay dividends in improved performance on trail. All in all, I still firmly believe that it’s the best system I’ve used to date from a performance based standpoint.

As far as day to day upkeep is concerned, something dawned on me recently, which I think very much affirms just how much I enjoy this setup. While it’s easy to get hung up on the aesthetics of a bike with just two brake hoses, the best aspect is that you no longer have to lube your shifter cable, or replace the housing as it wears out. Better yet, if you have a bike with a less than ideal routing, which can lead to added friction – and thus, hampered shifting performance – an AXS drivetrain eliminates that issue altogether. For my day to day riding, the only thing I had to be mindful of (aside from battery life) was the B-gap adjustment. My limit screws and trim settings have been “set it and forget it”, but I’ve found the vertical impact and constant jarring of rough terrain can slowly unwind the B-gap screw, which meant that I had to check it every other ride or two and often give it a half turn or a turn to put it in place. I’ll take that over cable and housing swaps any day of the week…

When AXS was first released, many people scoffed at the price. Part of this was due to the fact that it was initially only available as full drivetrain groups, with carbon fiber cranks and all – running to the tune of $2,000. Then, AXS became more accessible when the $1,000 Eagle AXS Upgrade Kit hit the market, with the option to mix and match with any chain, cassette or crankset that’s part of SRAM’s Eagle ecosystem. Making it more affordable still is the new GX AXS upgrade kit, which comes in at just $600, while boasting the exact same performance but with a slight weight penalty. Personally, in two typical years of riding I would have gone through at least a couple of fairly pricey derailleurs and quite a few cable and housing swaps. On one hand, perhaps I’m more accident prone than some, but on the other hand, I’m also confident that – barring a huge catastrophe – this derailleur can keep ticking for another two years. So in the long run, I can affirm with a very strong YES – even with a cost:benefit analysis under intense scrutiny, AXS is worth every penny in the long term – especially now that it’s more affordable than ever.