This was my first year going to Crankworx. Actually, it was my first year going to Whistler altogether. Based off of recommendations from good friends I decided that it was best to just bring my DH bike. At the moment, I’m riding a 26” Scott Gambler. Overall, it’s been a great bike and I have no real big complaints, but as a critical person there are always little tweaks and changes I’d like to see in just about everything I’ve ever ridden. Nothing is perfect.

After a few days of riding my bike and being quite happy with it, and Whistler in general, I bumped into the boys at Scott and Ben Walker (product manager/marketing coordinator) suggested I throw a leg over the new 27.5” Gambler and do a comparative test. I was already in Whistler with a great mix of terrain to throw at the new bike, so why not oblige him? 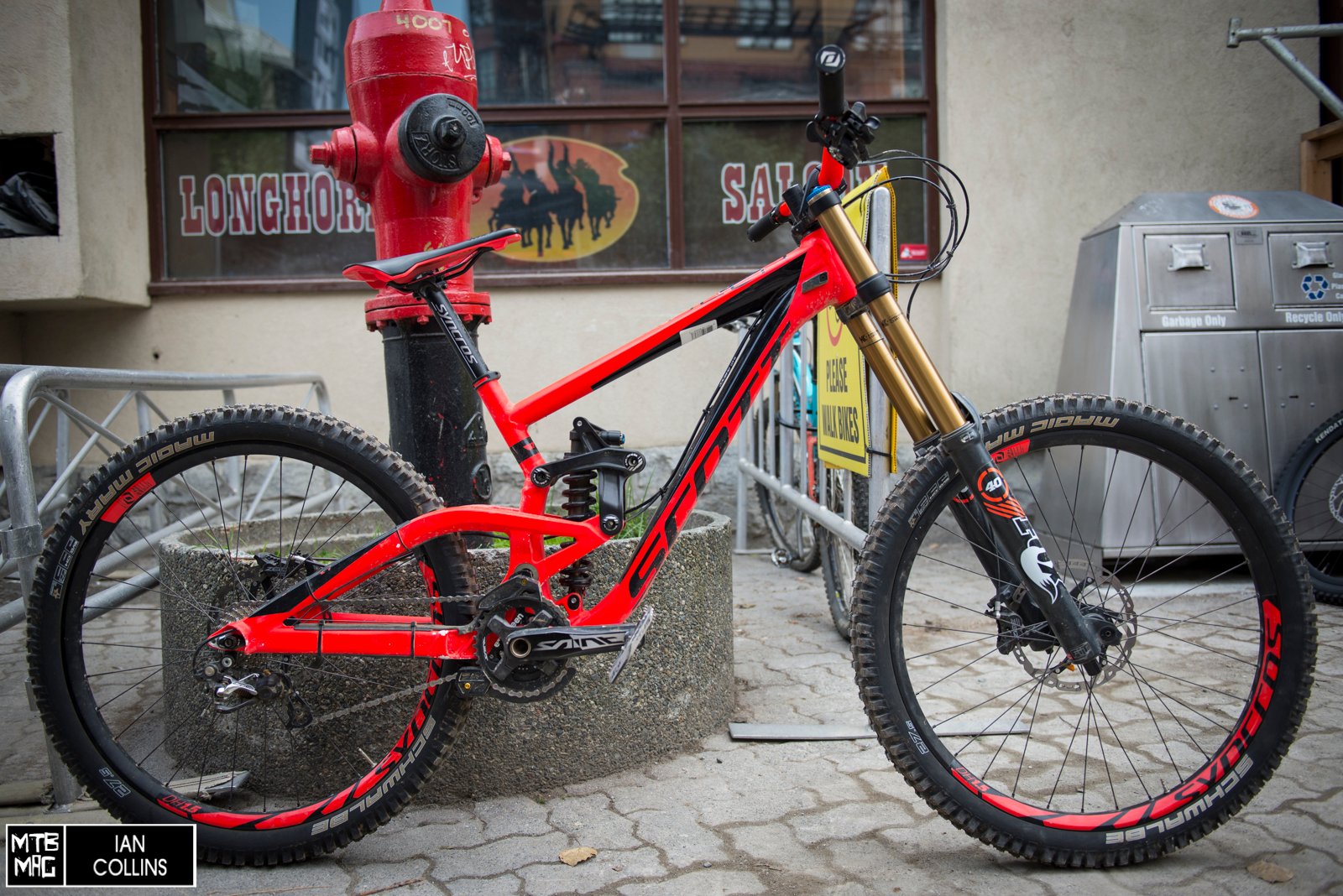 I’ll start with my current bike and what small variables I would’ve liked to see changed. The top tube felt a bit cramped, so to alleviate that, I purchased a +6mm set of custom cups to extend it out a bit so my arms could stretch out. I wasn’t alone in that call out, but Scott has listened to their consumers and the new Gambler’s top tube has been lengthened by 10mm. I thought that might feel a touch long, but I know I can just bump my stem from 50mm to 45mm and it will be right where I want. Perfect. 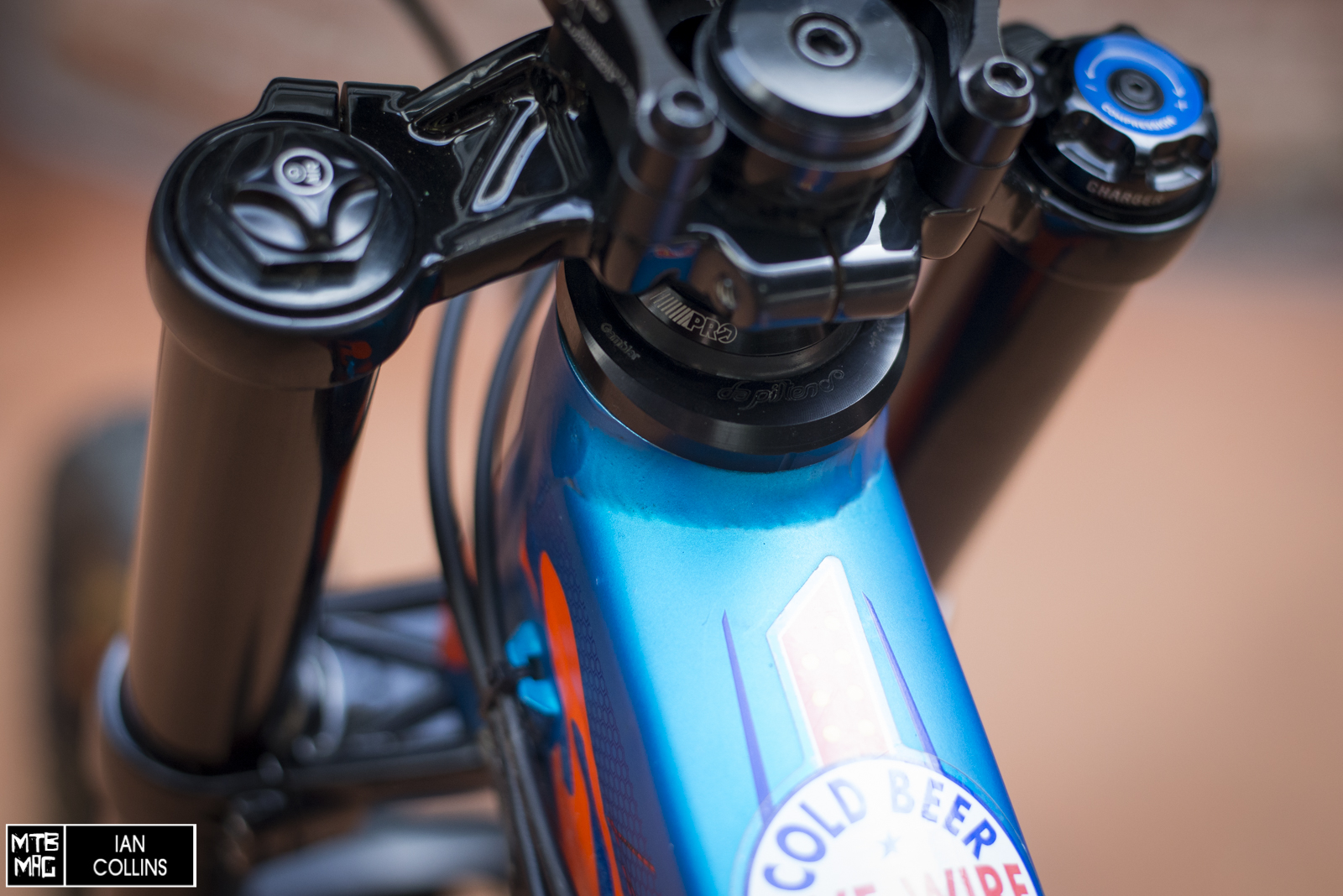 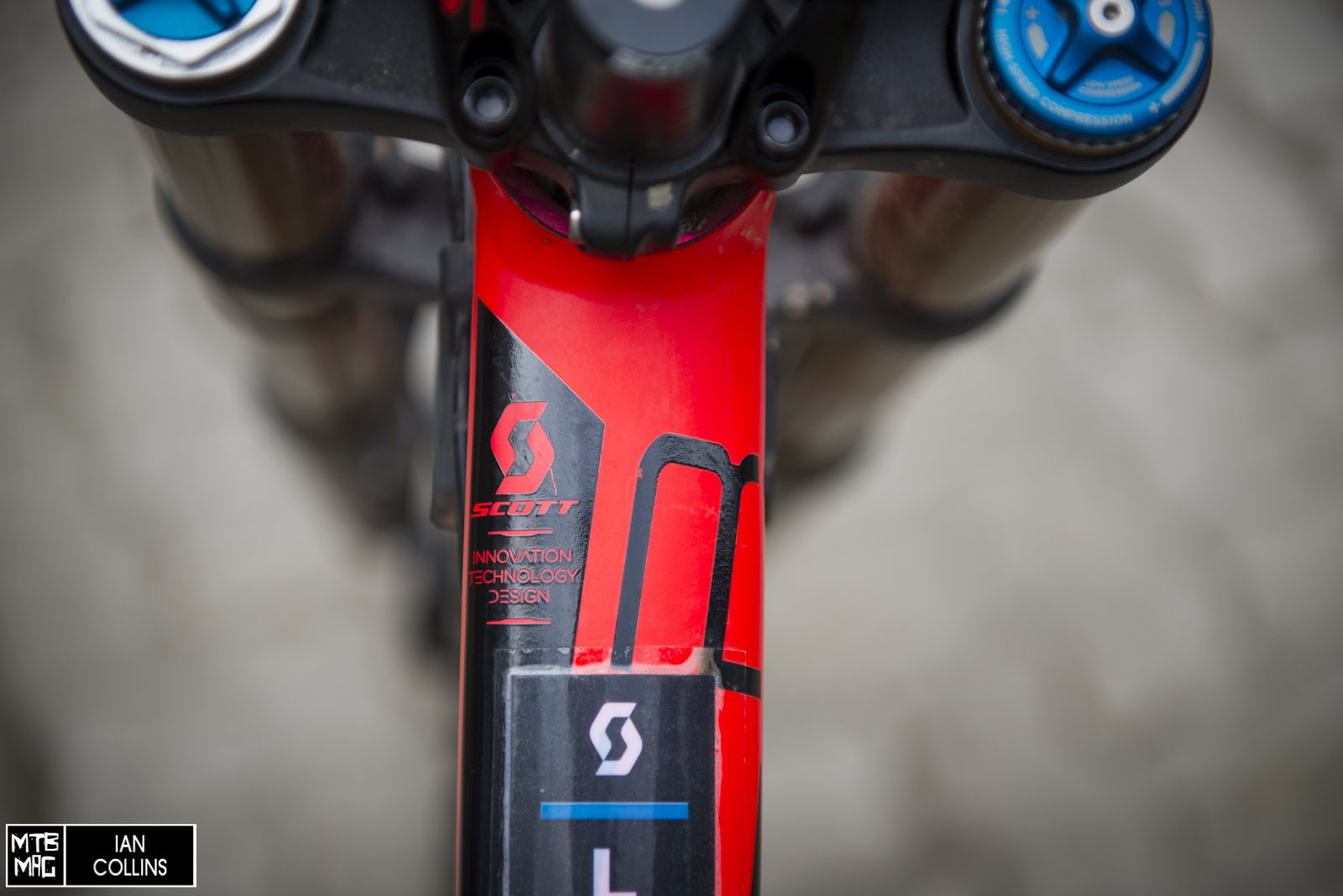 The next minor gripe was the super steep seat tube. As my saddle raised in height on the old bike, it barely lengthened my reach. Once again, Scott takes feedback seriously and has dramatically slackened the seat tube angle. A layback post will now no longer be necessary.

The single biggest change is the ability to adapt to either 27.5” or 26” wheels via a flip chip on the lower shock eyelet and two different rear wheel axle positions. Some people still like 26” wheels and this new bike won’t leave them high and dry. For instance, Nico Vink – a Scott team rider is running the new Gambler with 26” wheels. Then again, Nico spends more time off the ground than most of us. Additionally, the bike’s stock head angle went one degree steeper for better handling with the big wheels. Don’t forget, the Gambler comes with 3 sets of headset cups so regardless of wheel size or riding style you will have whatever head angle you want. 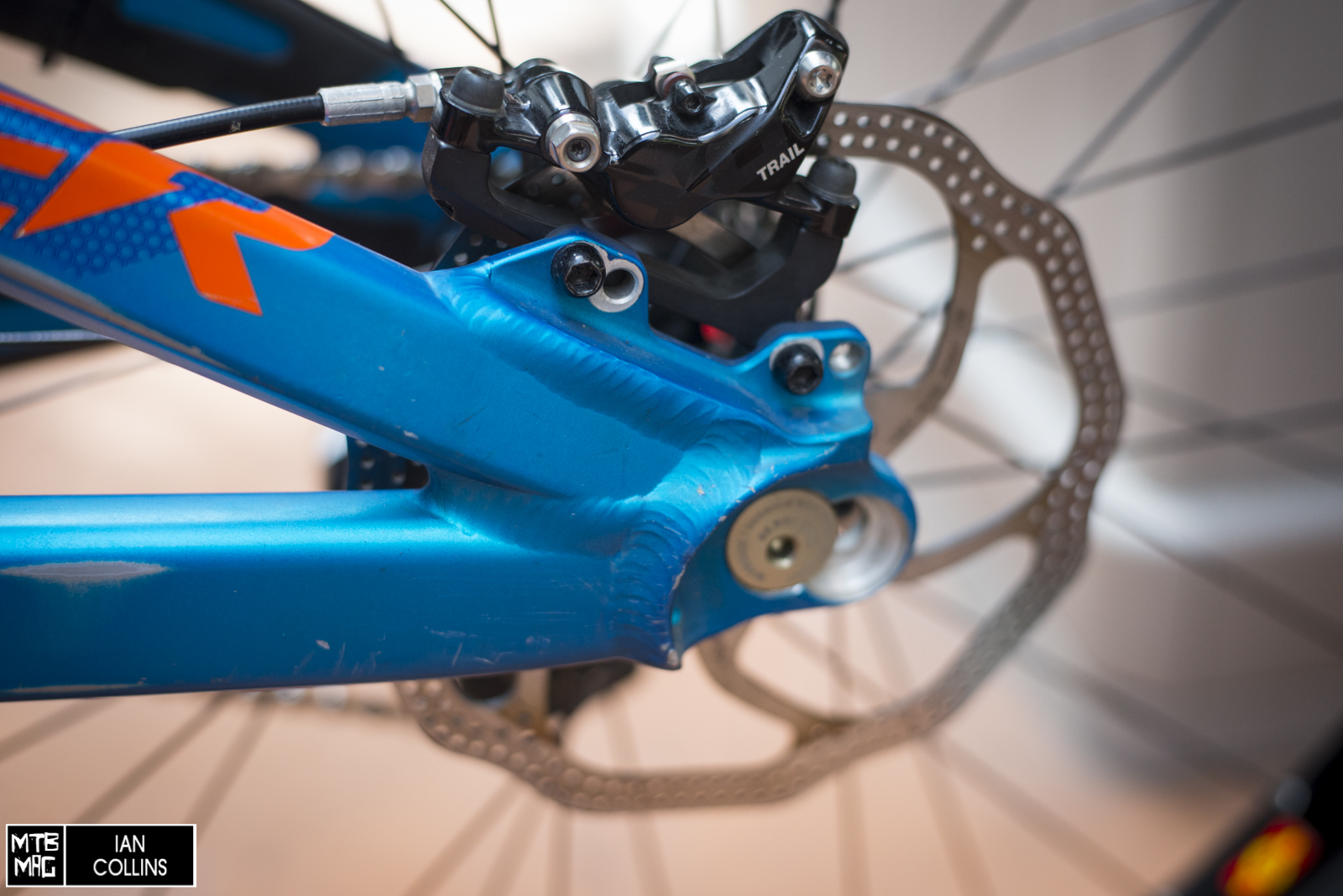 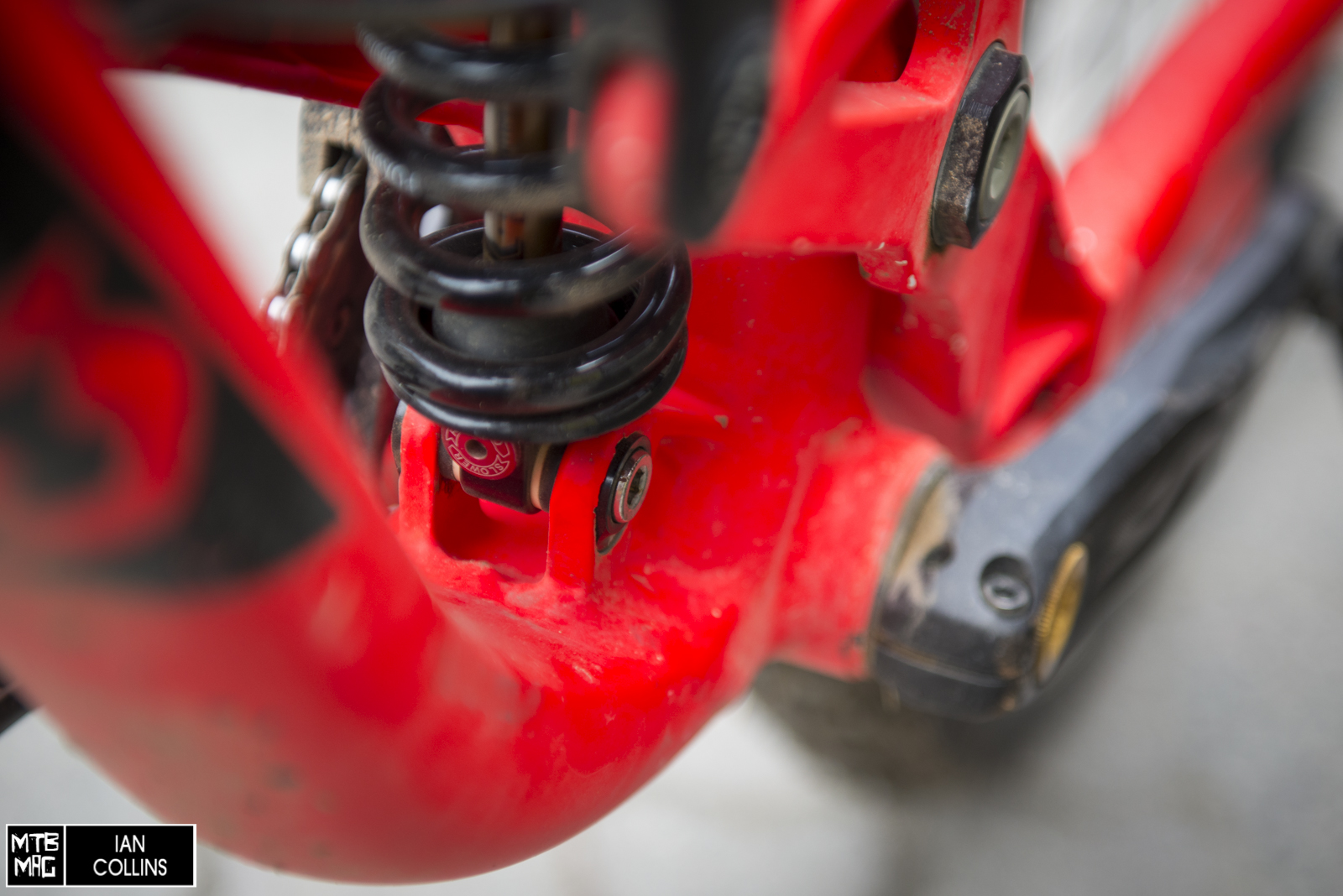 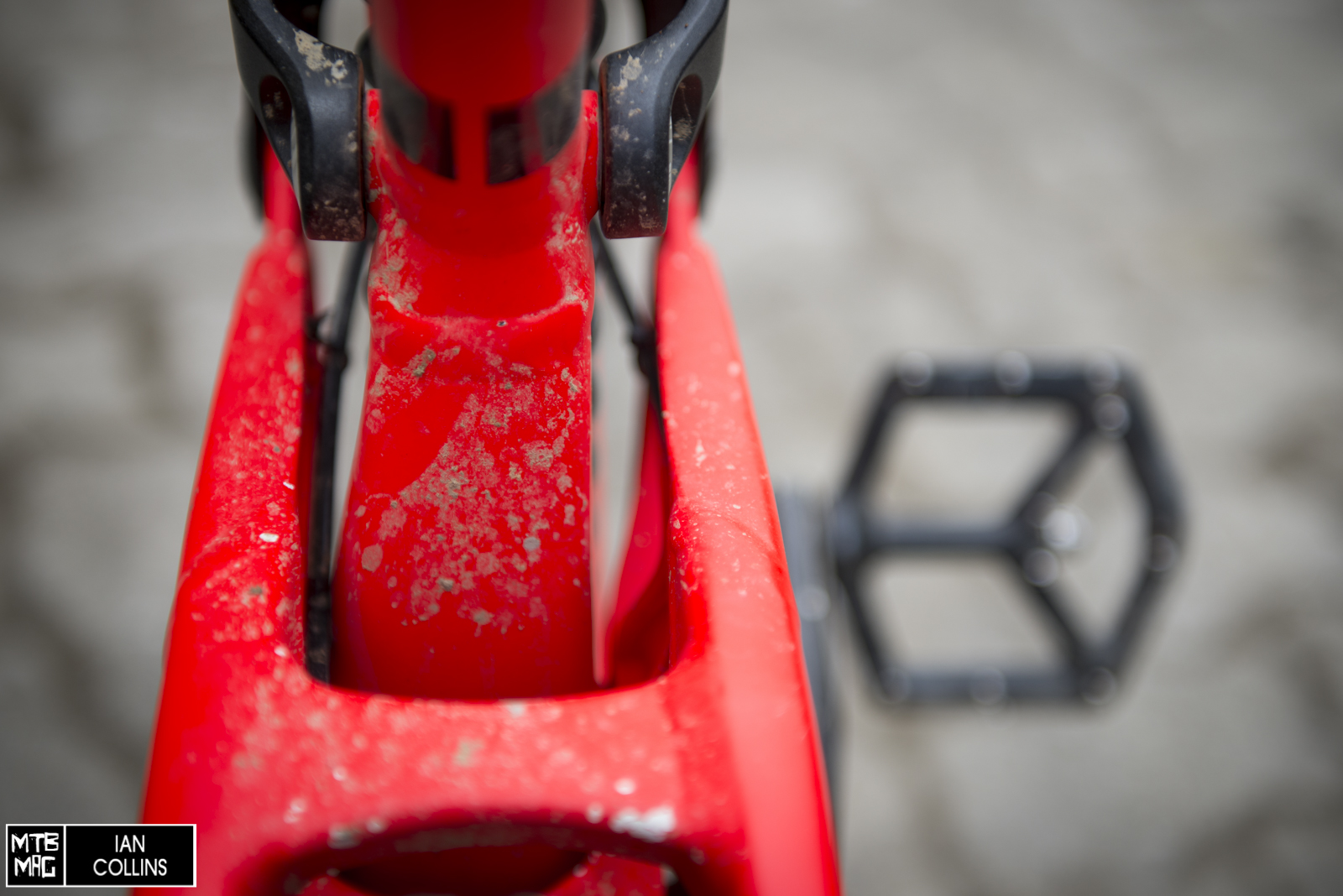 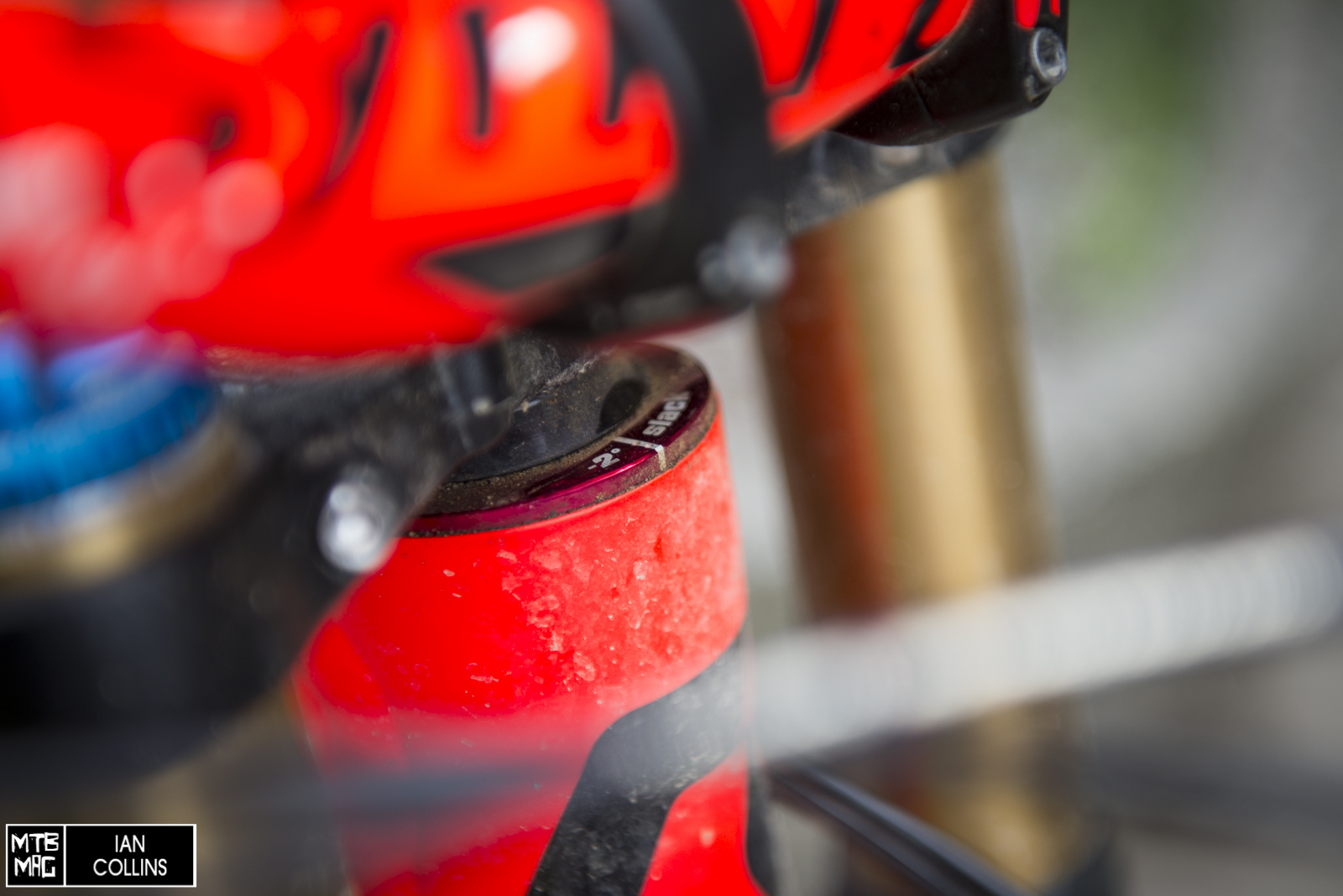 OK, enough of the boring stuff, let’s dive into the juicy details and geek out on the suspension. Scott has slimmed down the linkage to reduce bulk and simplify things a bit, but also they have changed the bike’s rate/kinematics slightly. The original Gambler was designed around the older Fox RC4 with a wider shaft. When Fox replaced that model with a narrower shaft, that changed the feel of the bike. The new bike has adapted accordingly and utilizes a 20% progression rate as opposed to a 23% progression rate. This makes the new bike a bit more linear, and thus – more predictable in the rough mid sized stuff. 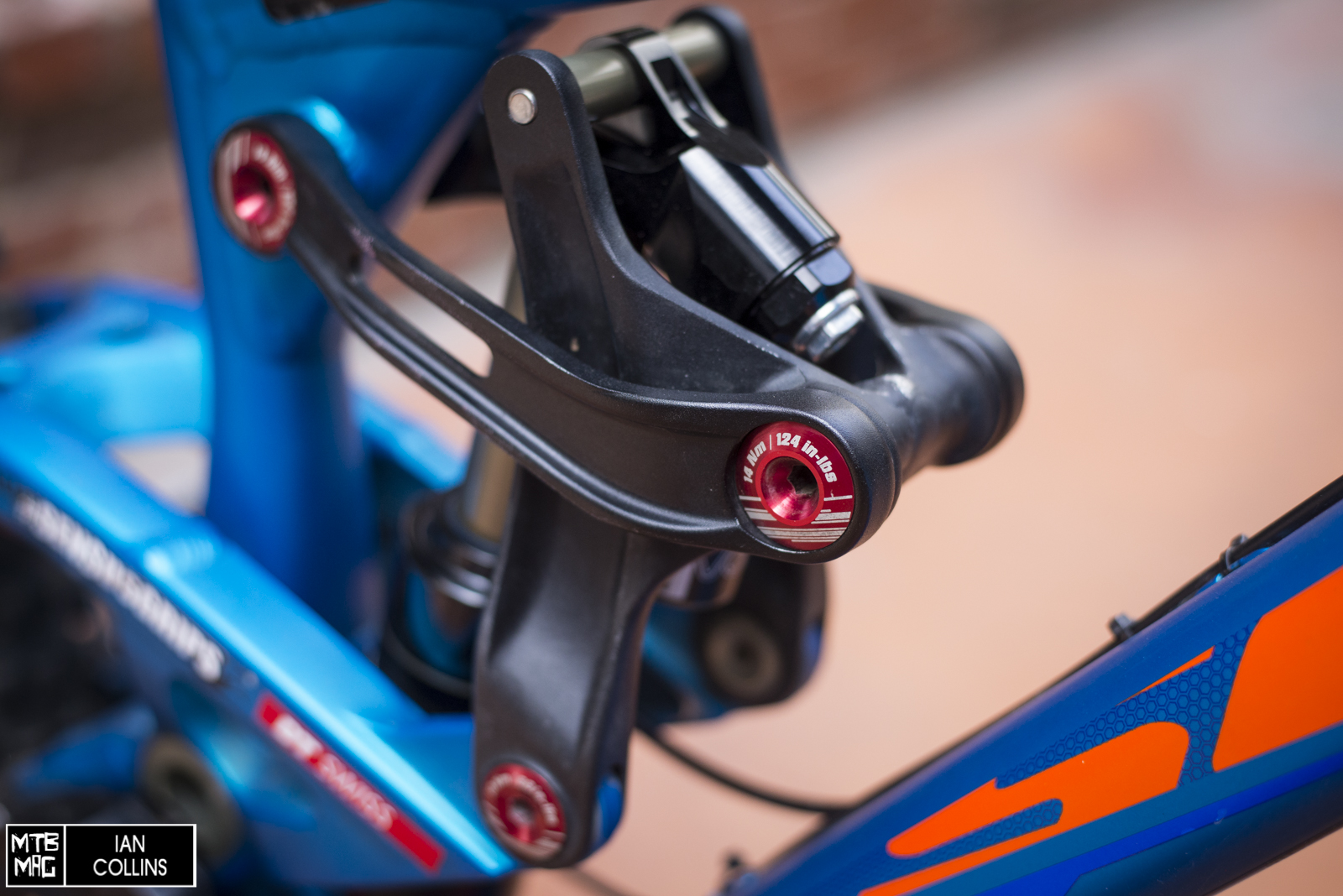 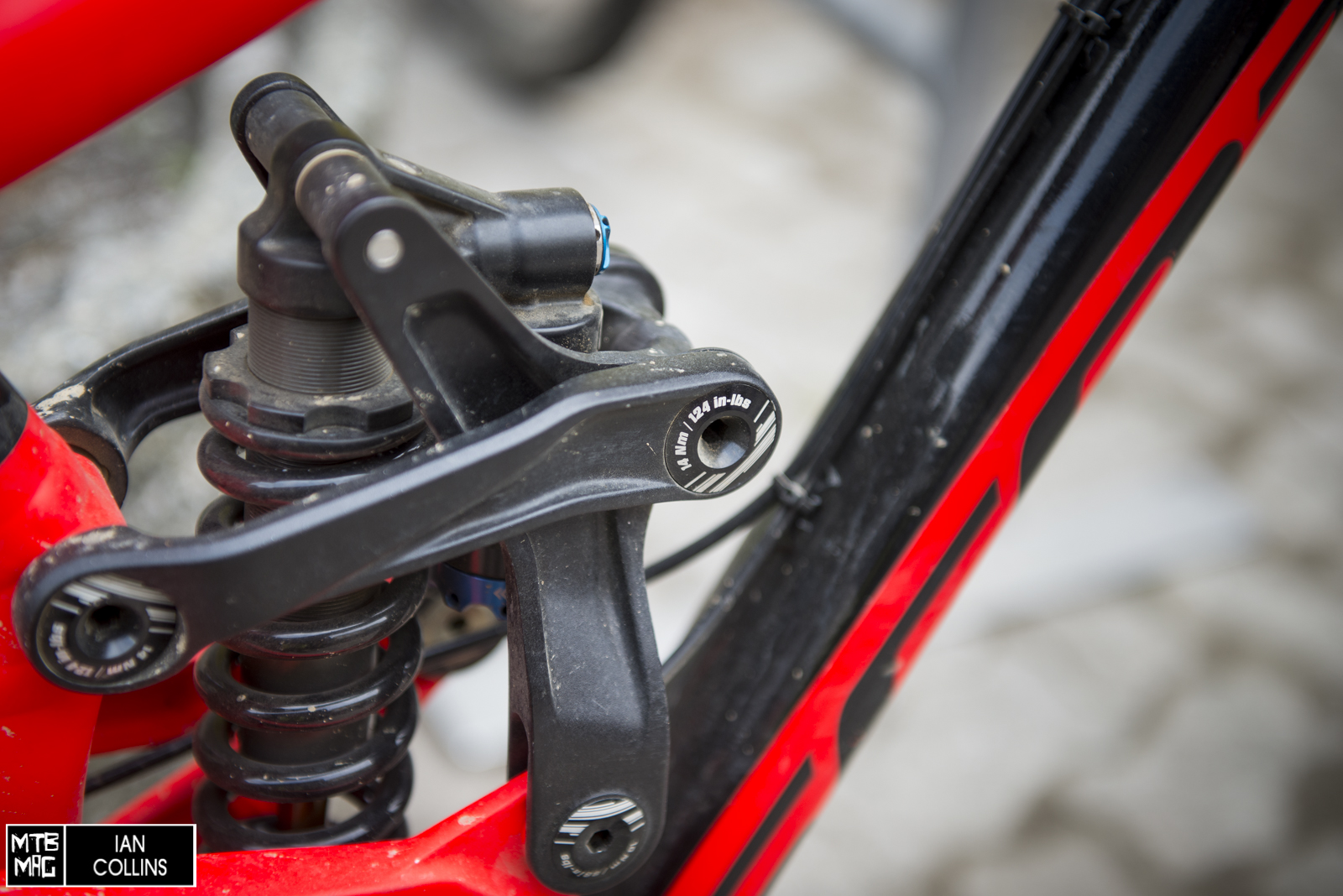 To wrap up the other details, Scott made slight tweaks to some things like the tube set and fork bumpers, but all in all we’ve covered the differences between old and new, let’s see how the bike felt in the real world. First and foremost, and as expected – the biggest difference was the wheels. Simply put, they took the edge off and made it easier to ride the bike faster with less effort. Braking bump chatter was less noticeable. Jarring big holes didn’t rattle my whole body or throw me offline. Big wheels don’t seem to make much difference on the big huge bottom outs, but they definitely did get up to speed and pick up momentum a bit faster than on the old bike. 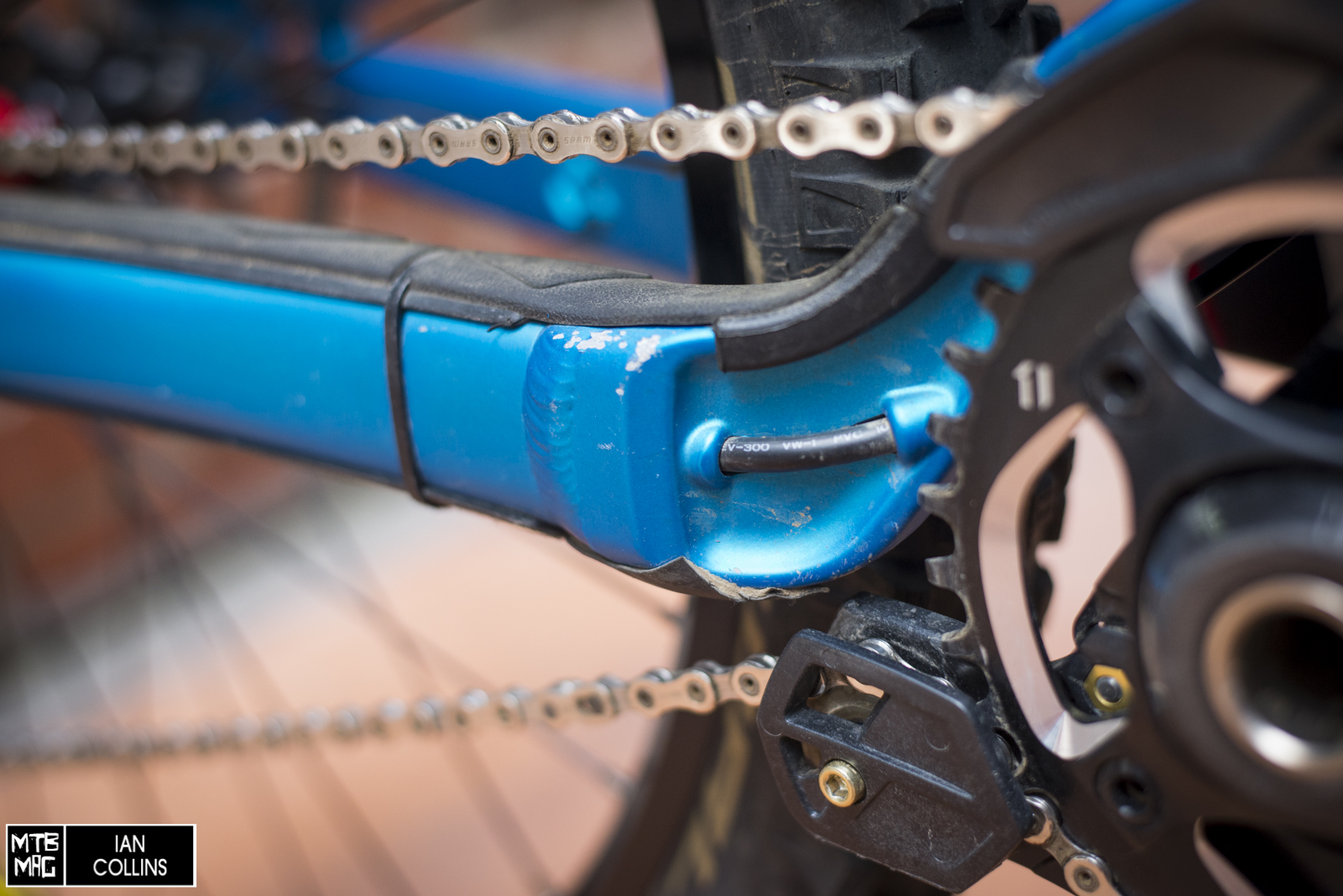 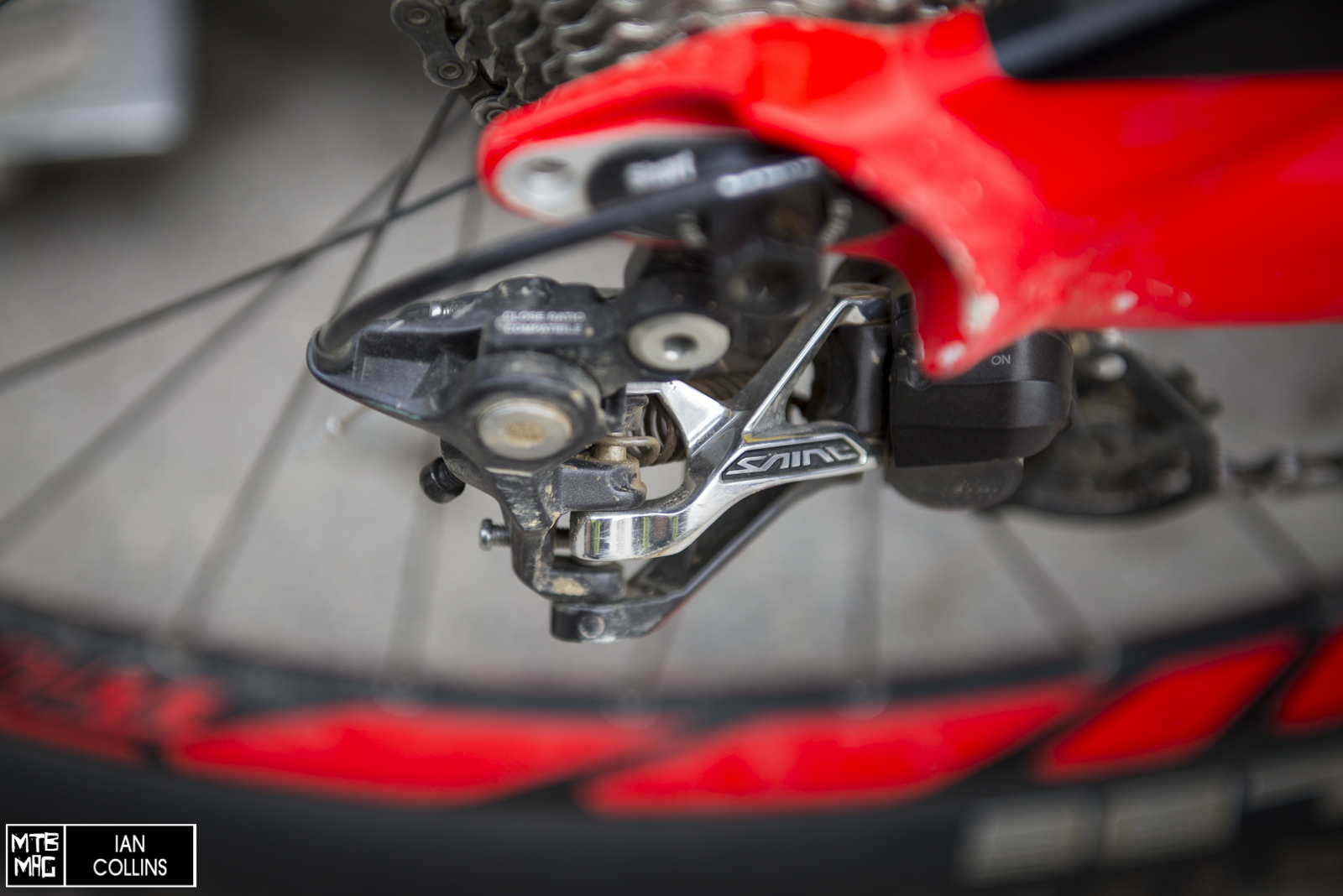 I rode the new bike on a good mix of fast open bike park trails with big jumps and berms, then some wooded bits that required a bit of body english to carry speed in the flatter turns. Lastly, I rode a really steep, fresh cut loamy section of new trail with some huge holes and ruts.

On all 3 types of terrain I didn’t feel any negative attributes relating to the larger wheels. Skeptics claim that the wheels might not corner or jump as well, but I had no issues and found the bike to simply be more forgiving and easier to ride at speed. Added traction meant later braking, and with the edge taken off on the small to mid sized hits, I felt less fatigued while riding. It’s worth mentioning that the bikes rate may have played into this a bit. I definitely could feel the suspension opening up a bit more on the mid sized rocks and bomb holes. This was most likely due to the more linear nature.

While I only had limited time on the new bike, I am thoroughly convinced that it’s an improvement all around. The 27.5” wheels are a big advantage and Scott addressed the slight tweaks and refinements that I think needed to be changed in order to move forward. The rest of the bike is pretty similar in construction, so it’s safe to infer that it will be just as stiff, durable and maintenance free as the previous iteration. I can’t wait to get my hands on one for a long term test.

[Video] Schwalbe Procore: a look inside the system