In this new article of our column “Once Upon a Time”, we reminisce over some of the more legendary frame graphics which have shaped mountain bike history. MTB brands have often created graphics for special editions which remained in the hearts of the fans. Some other times, a particular coat characterized the brand so much to almost substitute the logo, and be used for the official racing team and for the top-notch models. Certainly, we often remember the graphics of these special editions more than any other technical detail. We chose 7 among the most iconic graphics, but there are many others which deserve to be mentioned.

Talking about historical colors, maybe the first graphic that the “older” MTB fans remember is the one which made Yeti so famous in their early days, with the A.R.C. and A.R.C. AS. Turquoise blue and yellow have been the notorious colors of the Yeti racing team since 1987 and even today we can see them in some special editions of the iconic Colorado brand. In the picture we can admire a fantastic 1994 A.R.C. painted with the colors which first appeared in 1992. It is still eye-catching today for its elegant balance between class and flashiness. 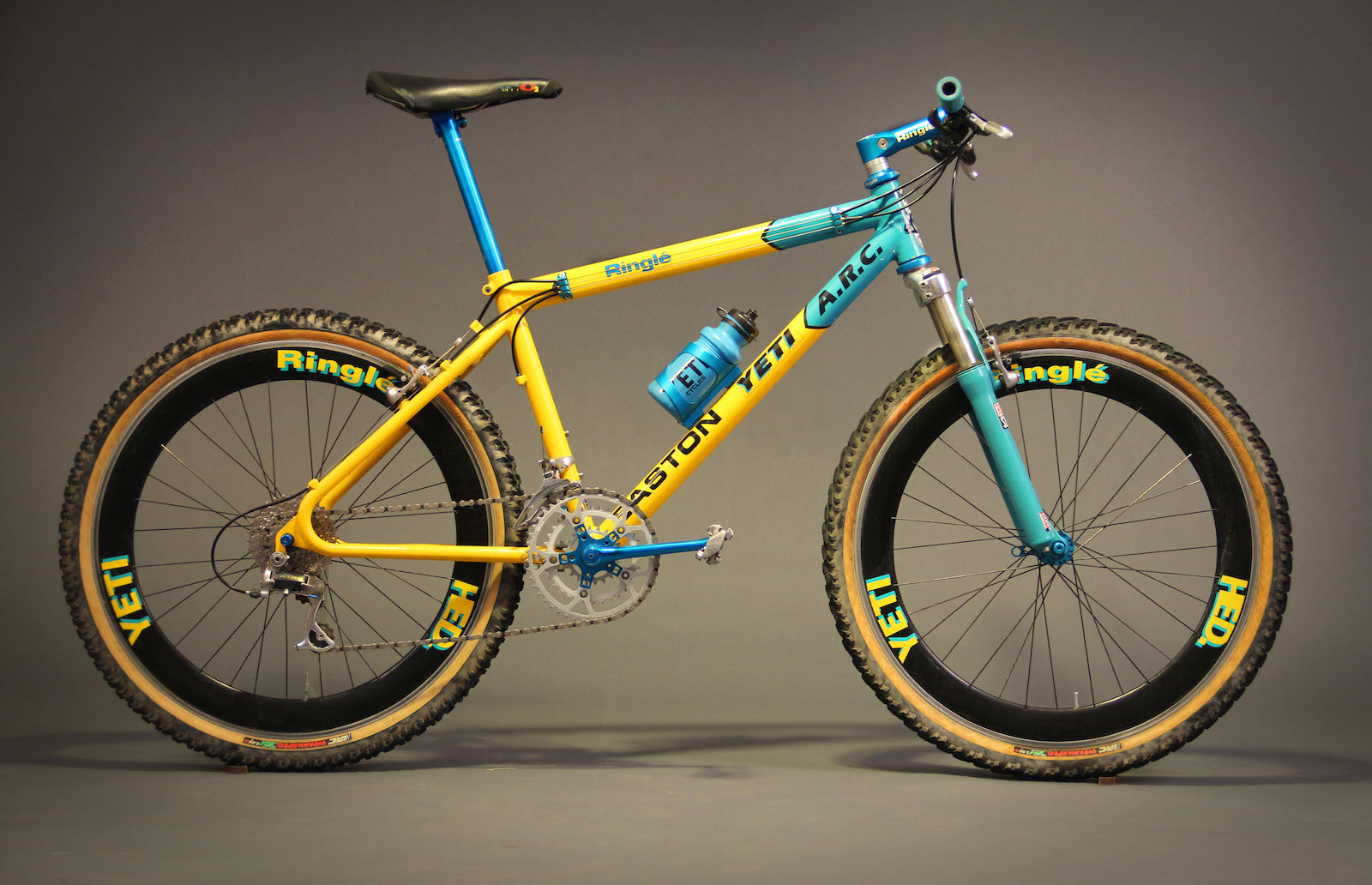 Speaking of  elegance, in 1995 Rocky Mountain launched the “Canuck” coat for the first time. The Suzi Q, a not-so-successful bike in comparison to other models of the same catalogue, like the Vertex and the Altitude, was first painted in white and red with the classic Canadian maple leaves shading. Various models would pick up the “Canuck” torch. In 1997 a new hybrid version of the red and yellow Team Only coat was created for the Element and the Vertex, adding the typical maple leaves shading. Then there has been a comeback of the classic red and white graphic used on some Rocky Mountain milestone bikes such as the Slayer, the Switch, the RMX and many more, including the Element from the 2018 range. 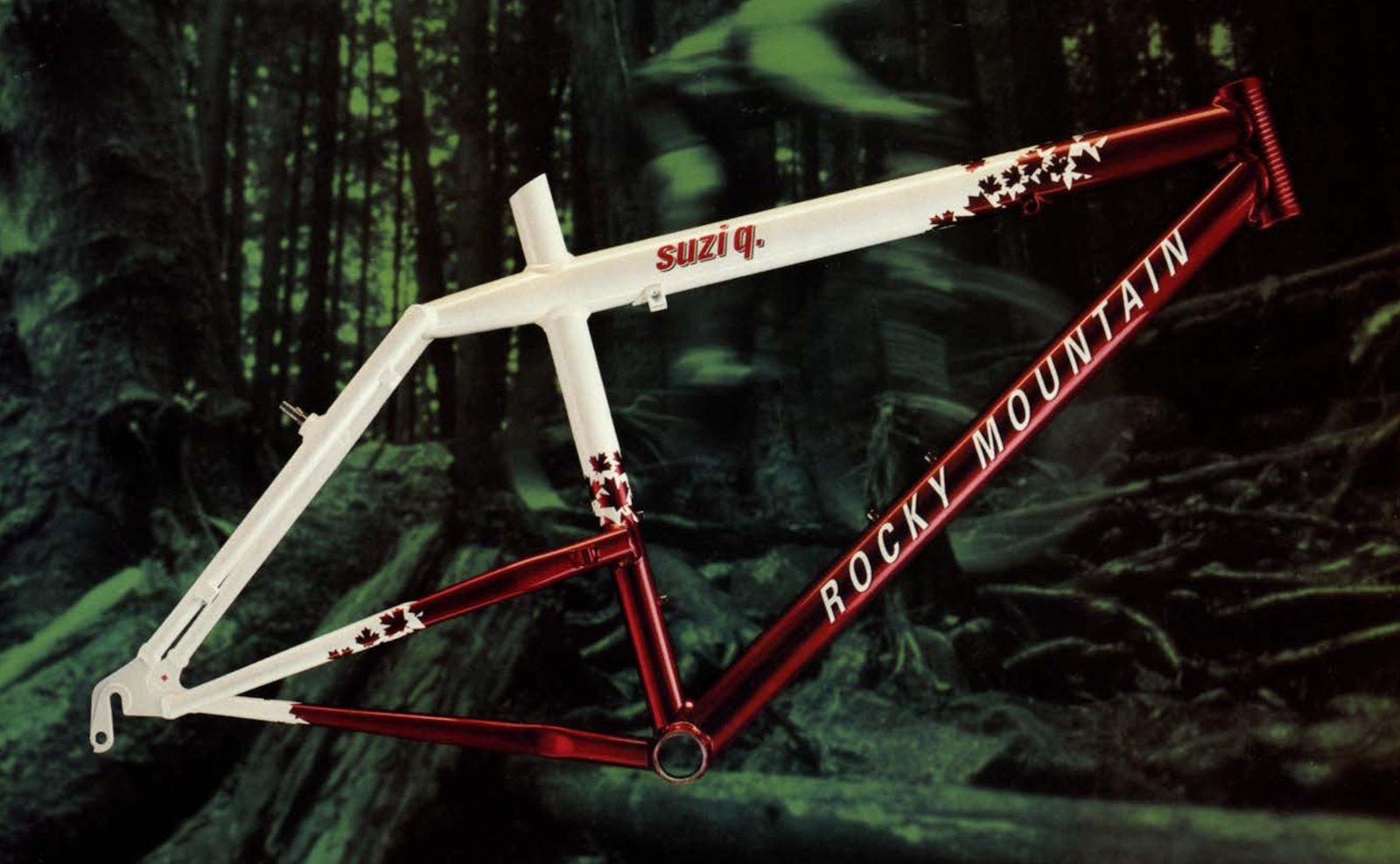 Not so classy, but definitely cool and showy, is the Intense M1, ridden by Shaun Palmer at the 1996 UCI DH World Championships in Australia, at Cairns, who got a silver medal right behind a young Nicolas Vouilloz. The monocoque M1, with the large and flat surfaces of the frame, made of two  huge parts welded together, was perfect for a customized graphic. Palmer wanted a “stars and stripes” design to show off at the Championships, and chose thea artist who was known as the best motocross helmet airbrusher of the time, Troy Lee (Designs). Palmer launched the idea, still popular today, of having the bike painted with the National colors at the Worlds. Under the podium, in his classic punk style, Palmer said: “alls I’m saying is that once I get some fitness he better watch out…” 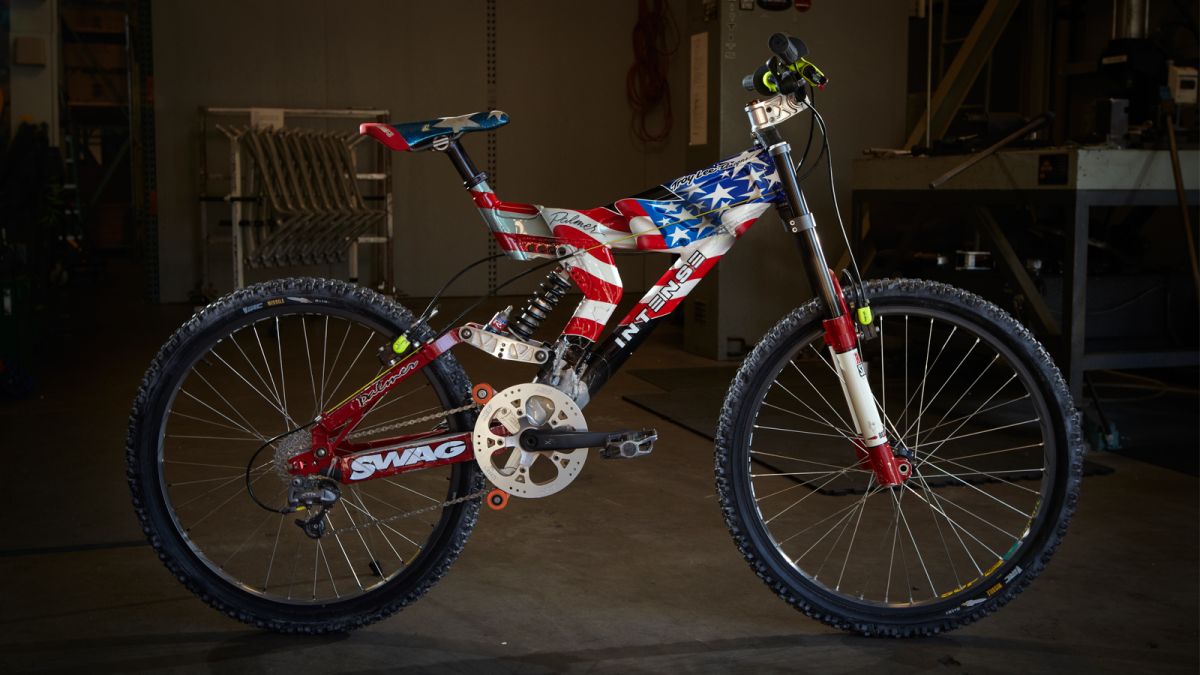 Rocky Mountain deserves a special place in the frame painting field. The Canadian brand has always paid great attention to the quality of the graphics and the paint itself. It is impossible to forget the 2003 RM7 Wade Simmons edition, painted in silver fading into green flames over black, typical hot rod style. In those years Wade was the king of Freeride (or Froride, to be more exact) and this RM7 has been the forbidden dream of many of us. In 2016 Rocky Mountains launched a special edition of the Maiden with the same graphics: a nice gift… but the RM7 Wade Simmons remains unmatchable. 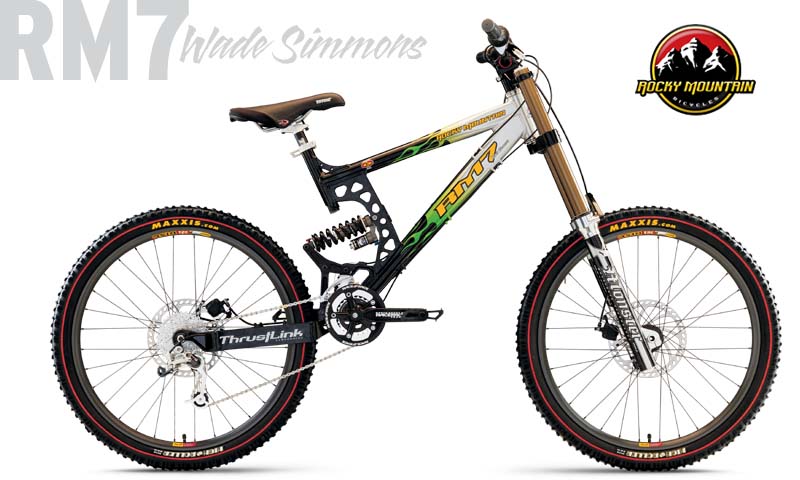 With this bike we enter the modern era of MTB. In 2007, the Australian Sam Hill was unbeatable in DH, winning well ahead of everybody else with incredible margins. The Iron Horse Sunday became synonym of Sam Hill and he had it customized with various graphics, using gold or the green of his main sponsor, Monster Energy. Some of the graphics the rider used at competitions, would be produced in the next season, but there was one which is still iconic and has never been used again. It is the Australian flag coat Hill won the 2007 Worlds in Fort William with, after a superior UCI DH World Cup season. For those who were into DH in those years, the Sunday with that coat stands for a great chapter of the history of this sport. 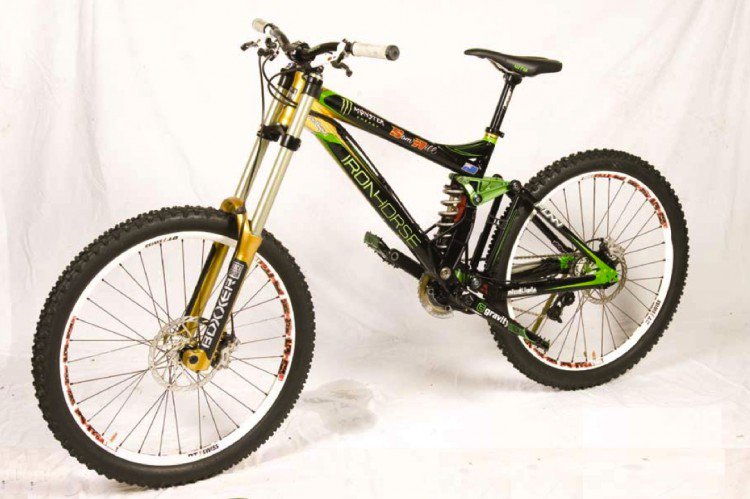 The Syndicate Santa Cruz V10 deserves a place among some of the more recent MTB frame paint schemes. The Syndicate team always creates interesting graphics from season to season, which are specifically made for the athletes of the racing team. Since 2006, when the team was born, the first V10.2 had unique graphics, which were greatly appreciated to the point that that those frames became a sort of status symbol. The most iconic version appeared on the 2007 V10.3 prototypes ridden by King Peaty and the stylish Nathan Rennie. They had the team colors, red, white and black, combined with the Syndicate and Santa Cruz logos. The black faded into white through a sophisticated line with a grass blade pattern, and the same was between white and red. This idea was kept on the World Championships versions, except for the fact the bikes were painted with the National colors of the athletes. 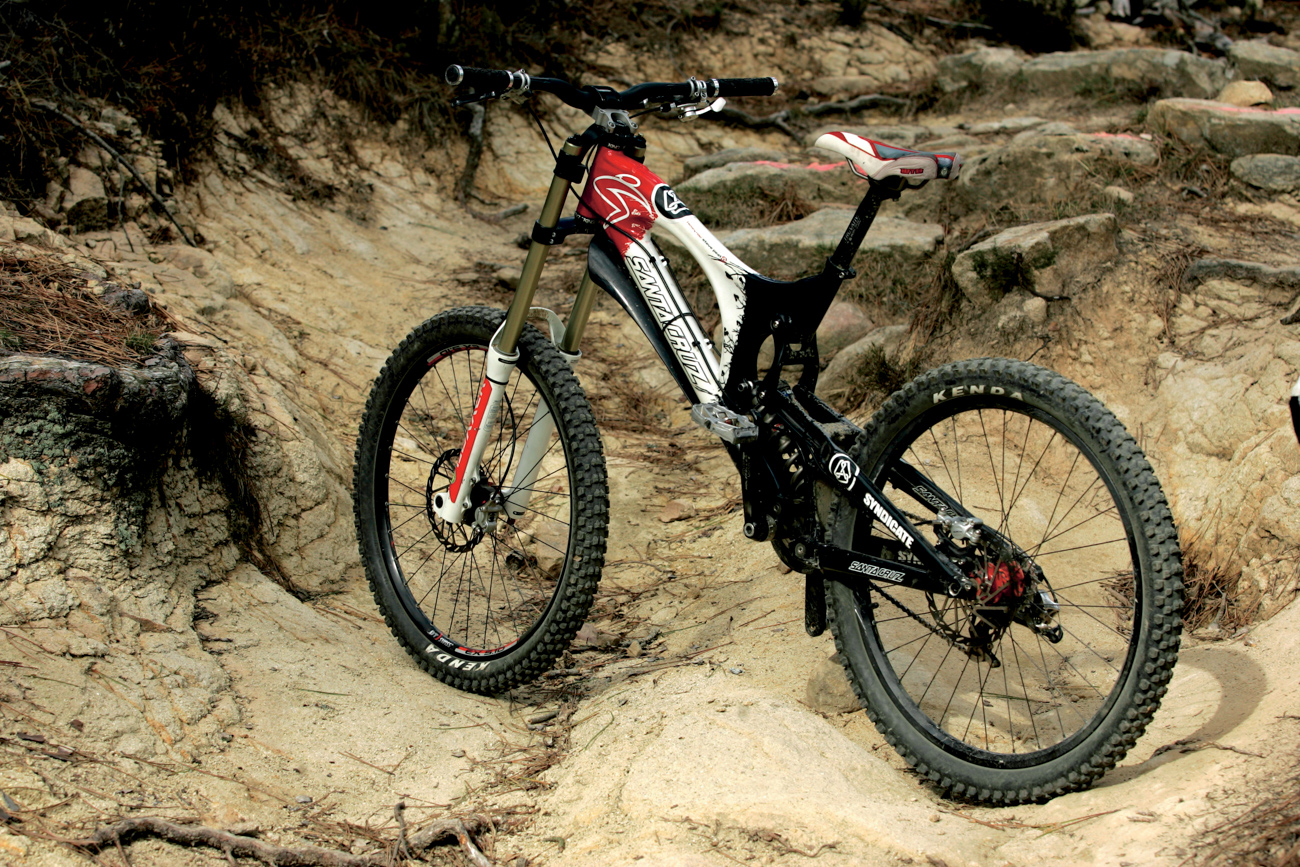 The next season, a fresh wave of wild bike colors came from the UK. Orange established an official UCI DH World Cup team together with the video company MTBcut, which painted the frames the same neon pink as their logo. From the first 224 EVO, the Strange prototypes and in the end the 332, including some Enduro models such as the Patriot, (pictured) the Five and the Alpine, Orange made the neon pink the official color of the new era of their racing team. Athletes like Ben Cathro, Fraser Mcglone and Joe Barnes (who is now committed to Enduro) were able to bring a breath of fresh air in the DH World Cup circuit, binding the neon pink to the typical British riding style, mid-way between competition and pure fun. The same athletes, in those years, riding these neon pink bikes, created the well known video series called “The Dudes of Hazzard”. If this article called to mind some other particular models, share them in the comments…the other readers will be glad, for sure.