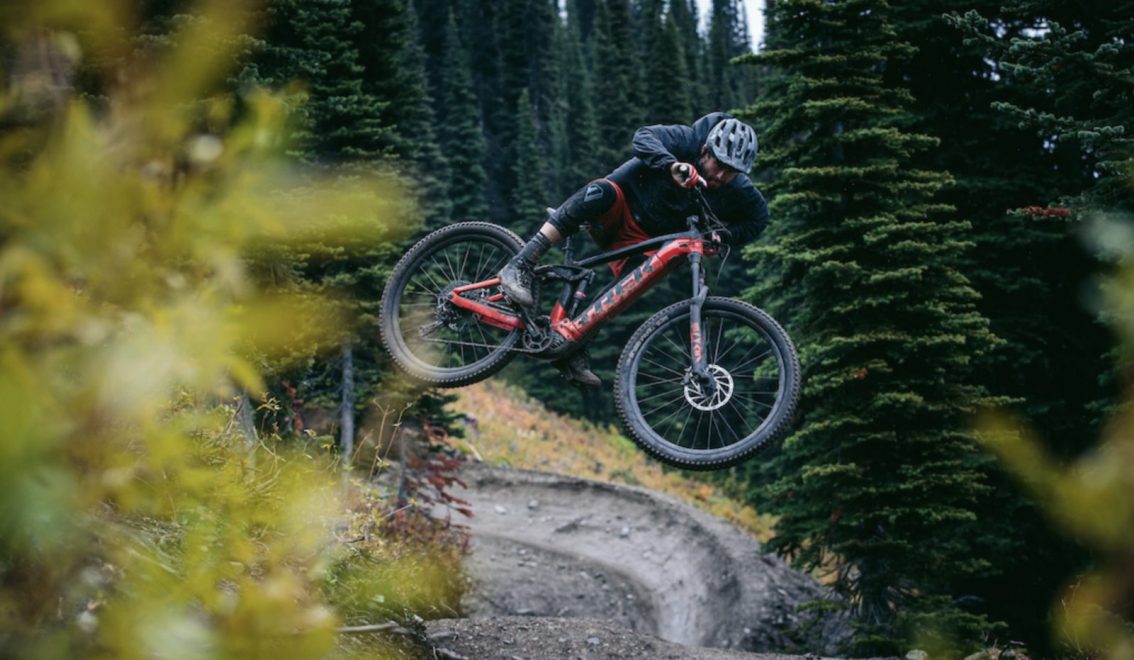 [Opinion] An E-Bike Will Make You a Better Rider

[Opinion] An E-Bike Will Make You a Better Rider

After much grappling with my own thoughts on the matter, finally, a few months ago I caved in and bought an e-bike. I waited a while for a few reasons, but as a photographer who’s often carrying around a heavy camera bag on gnarly missions where light and timing is critical, it was only a matter of time. Another justification is that I often dig and work on trails deep in the woods, but I don’t exactly enjoy hauling tools 2 hours out and back into the woods in work boots and jeans. So, my motivation for buying an e-bike was mainly utilitarian, despite the fact that almost all of my riding buddies incessantly rave about how much fun they are.

And then I started riding it…

After the initial buzz wore off, I noticed something that I didn’t expect – every time I got back on my “normal” bike, I was riding better and better. I was overshooting jumps and stepdowns that I typically had a hard time clearing. In fact, a couple of weeks ago, I hit a rather sizable, blind drop for the very first time which had been haunting me for the last 5 years. I’ve eyed it up on a downhill bike with a full face many times, but just never had the stones to do it. I’ve been feeling so confident from riding the e-bike that I finally sucked it up and sent the damn thing…on the e-bike! Riding an e-bike on aggressive trails is like running underwater, or something. Maybe that’s not the best example, but due to the extra weight, you have to pull up harder to jump and manual. You can’t late brake to the same extent and your cornering speed has to be more precise because it’s hard to slow down and easy to overcook turns on top of an extra 20 pounds. The back ends of e-bikes are usually pretty long and the suspension typically doesn’t feel as sophisticated. You need heavier duty tires and wheels, which are also harder to throw around.

The list goes on, but the point is that LITERALLY the only thing that’s easier on an e-bike is climbing. Absolutely everything else is harder and that is precisely what makes them the ultimate training tool.

Don’t believe me? This idea first came into my head during the shooting of ‘Parallel’ with Brandon Semenuk and R-Dog last Winter. The project was no easy task – orchestrating two riders and a filmer on a moto with a 300 pound rig, all riding on a twisty, custom built track with the riders constantly making passes. Add in the fact that the track was steep and our times to shoot were short, due to bad weather and that didn’t exactly leave the riders with loads of practice times for multiple takes. The answer? E-bikes. Every day when we finished with whatever digging we had to do, Brandon and R-Dog put the shovels down, jumped on their e-bikes and knocked out a few practice laps to get the timing down quickly without having to deal with multiple long pushes back up to the top of the track. To quote both of them loosely: “there is no way we would have finished this project on time without e-bikes.” They also both commented on the fact that the sluggish nature of the e-bikes made the riding effortless once they jumped on their standard mountain bikes as well. 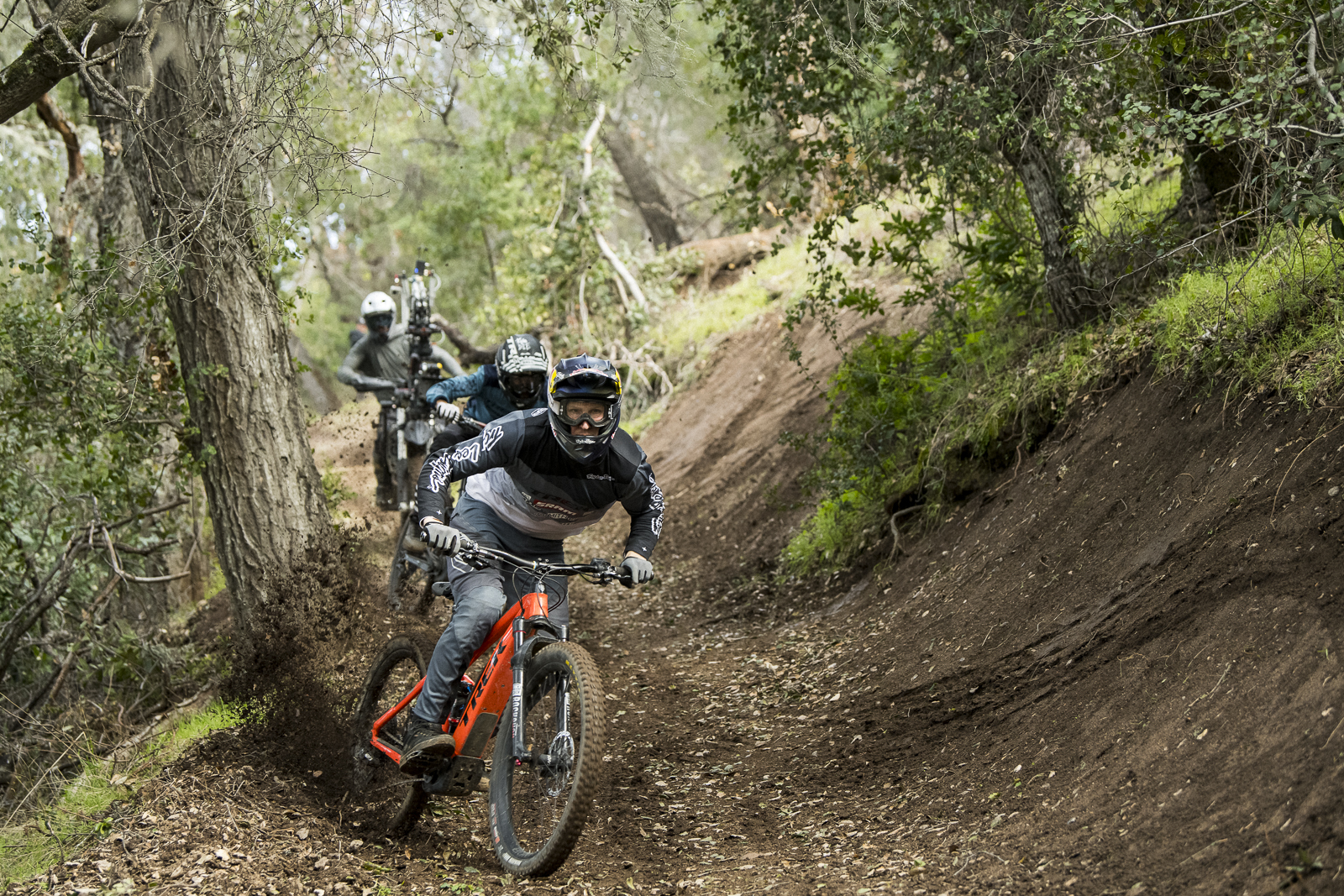 Sill don’t believe me? Just ask the pros…E-bikes are their semi-secret training weapon that no one is talking about. EWS and World Cup DH pros are riding e-bikes way more than you think – especially now, during this pandemic. You don’t need to rely on other friends to shuttle in order to get in tons of descending in a short amount of time. You can smash out 10 laps on a 3 minute track in an hour and a half, no problem, by yourself. Hello blisters! There’s no way that’s NOT beneficial to a training regimen. Speaking of racing – brands who don’t actually even make e-bikes are BUYING e-bikes from other brands for their racers to train on. While I’m not going to out the brand or the racer who told me this, I know this first hand, for a fact. In any case, if that isn’t proof of their effectiveness, I don’t know what is.

At the end of the day, I’m not trying to convince you to go out and buy an e-bike. I don’t really care what you do with your time and money. I’m just letting you know that they can and will make you a better rider…If you still think I’m wrong, good luck convincing Brendan Fairclough, Bernard Kerr, Brandon Semenuk, Ryan Howard, Martin Maes, Josh Carlson, Kyle Strait, Kade Edwards, Olly Wilkins and many more that they’re wrong too… 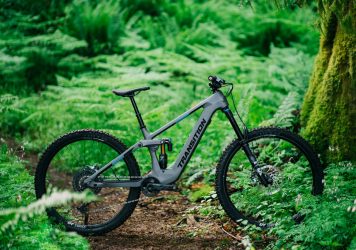