Snowshoe made its debut in the World Cup MTB circuit hosting the final race of the exciting and hard-fought 2019 season, full of spectacles and twists. The stars and stripes layout offered two sections, the first one fast and full of jumps and berms, broken up by a natural section that were rough and rocky everywhere. These sections’ flatter nature posed a challenge as riders couldn’t easily pedal though them, so carrying speed naturally was key. A track far from trivial put the world’s top riders to the test, closing out the season in the best possible way, with a razor-sharp finish in the challenge between Loïc Bruni and Amaury Pierron. It was Danny Hart, incredibly fast and precise in his run that led him to his first victory of 2019. 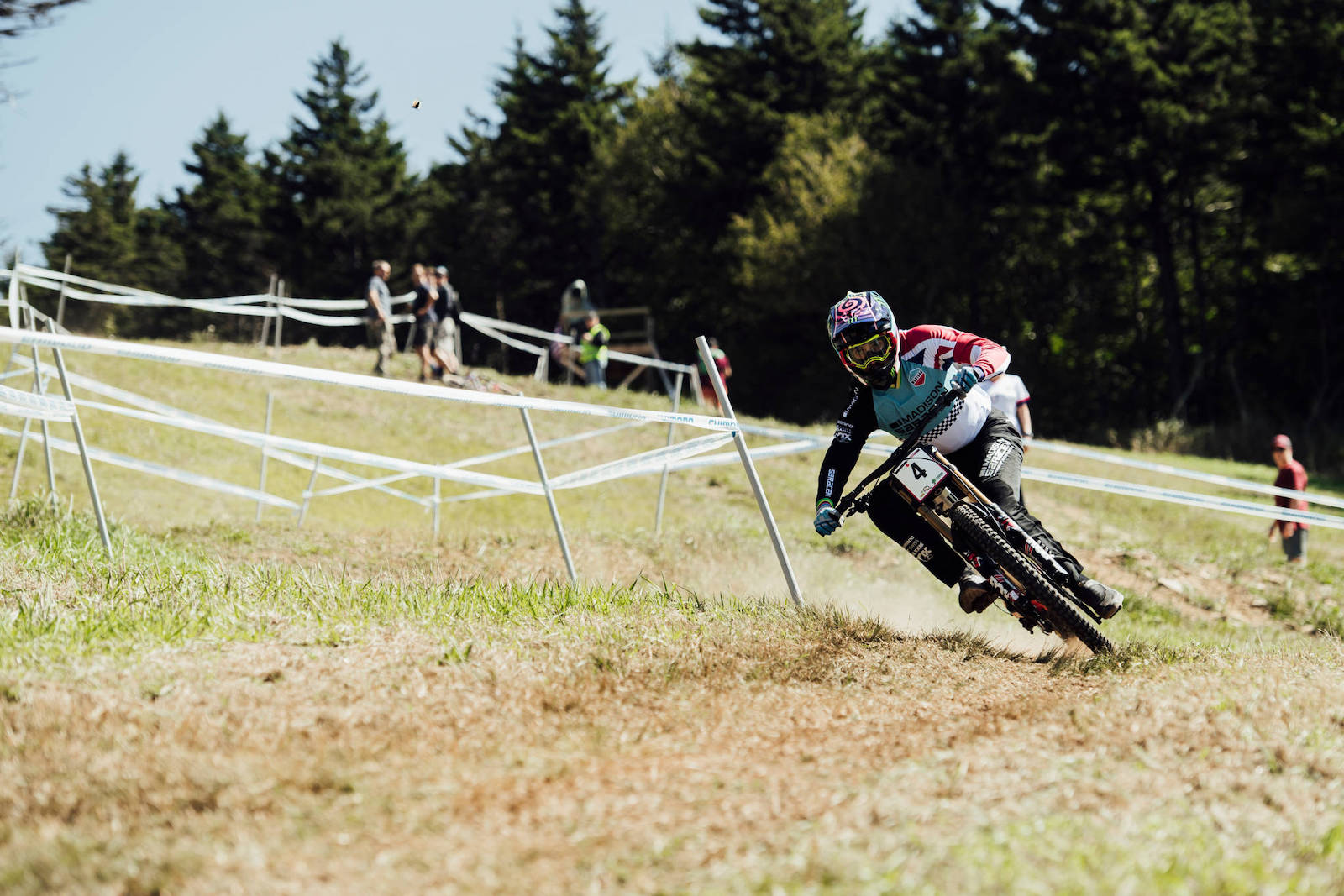 In fact, before his descent Pierron was in the lead, while Bruni was in third place. If Hart had landed between Pierron and Bruni, as the split times were indicating, the new world champion would not have had the necessary points to win the overall. But in the end, Hart in an incredible progression displaced everyone by winning the race and stomping out the advantage held by Pierron… serving the overall victory of the UCI DH World Cup 2019 circuit to Loïc Bruni, the first of his brilliant career. 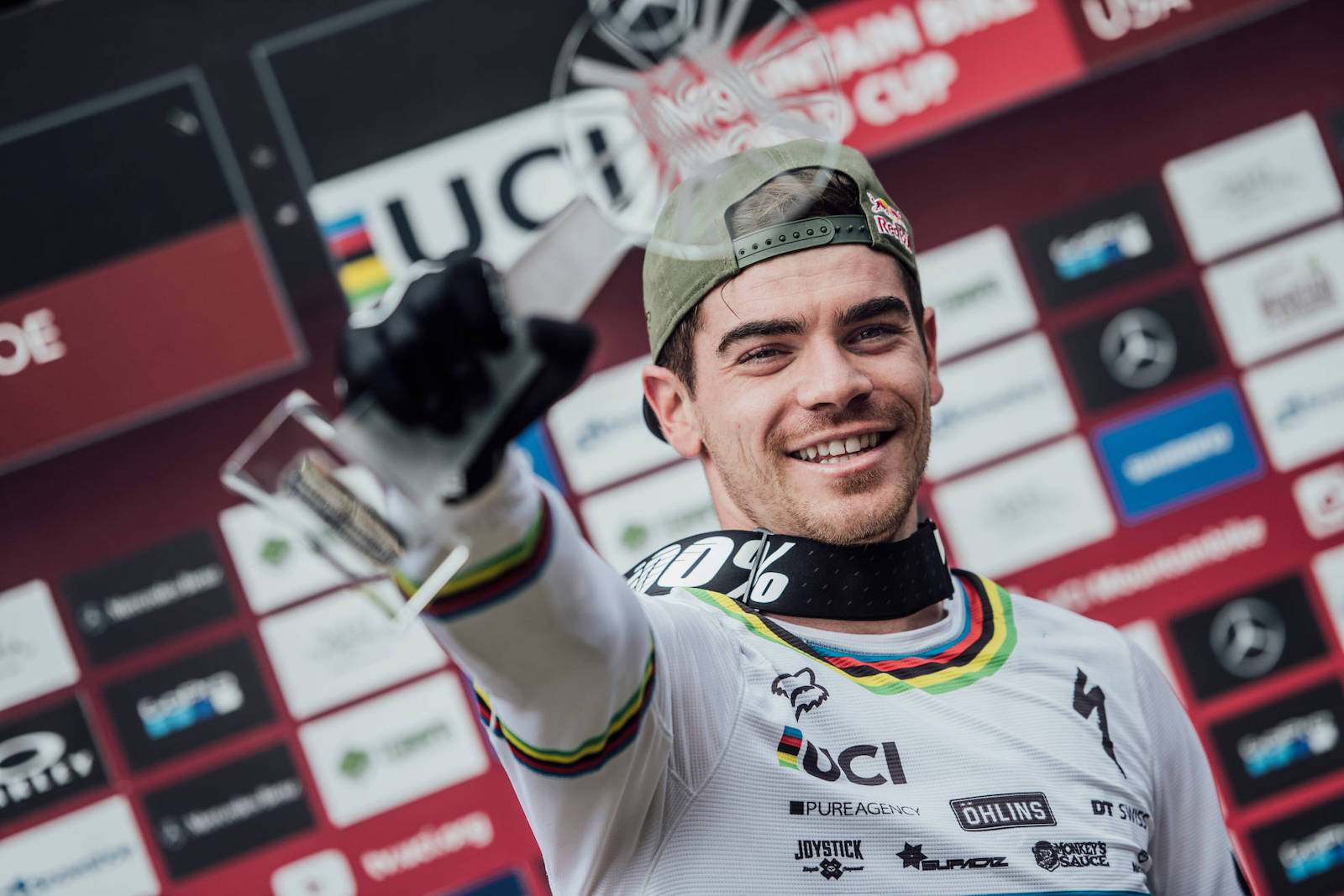 Pierron had to therefore settle with second place both in the race and in the overall, despite an impressive run where he literally flew over the rocks and straight lined impossible trajectories with incredible riding that showed his willingness to lay it all out on the line to win the overall. 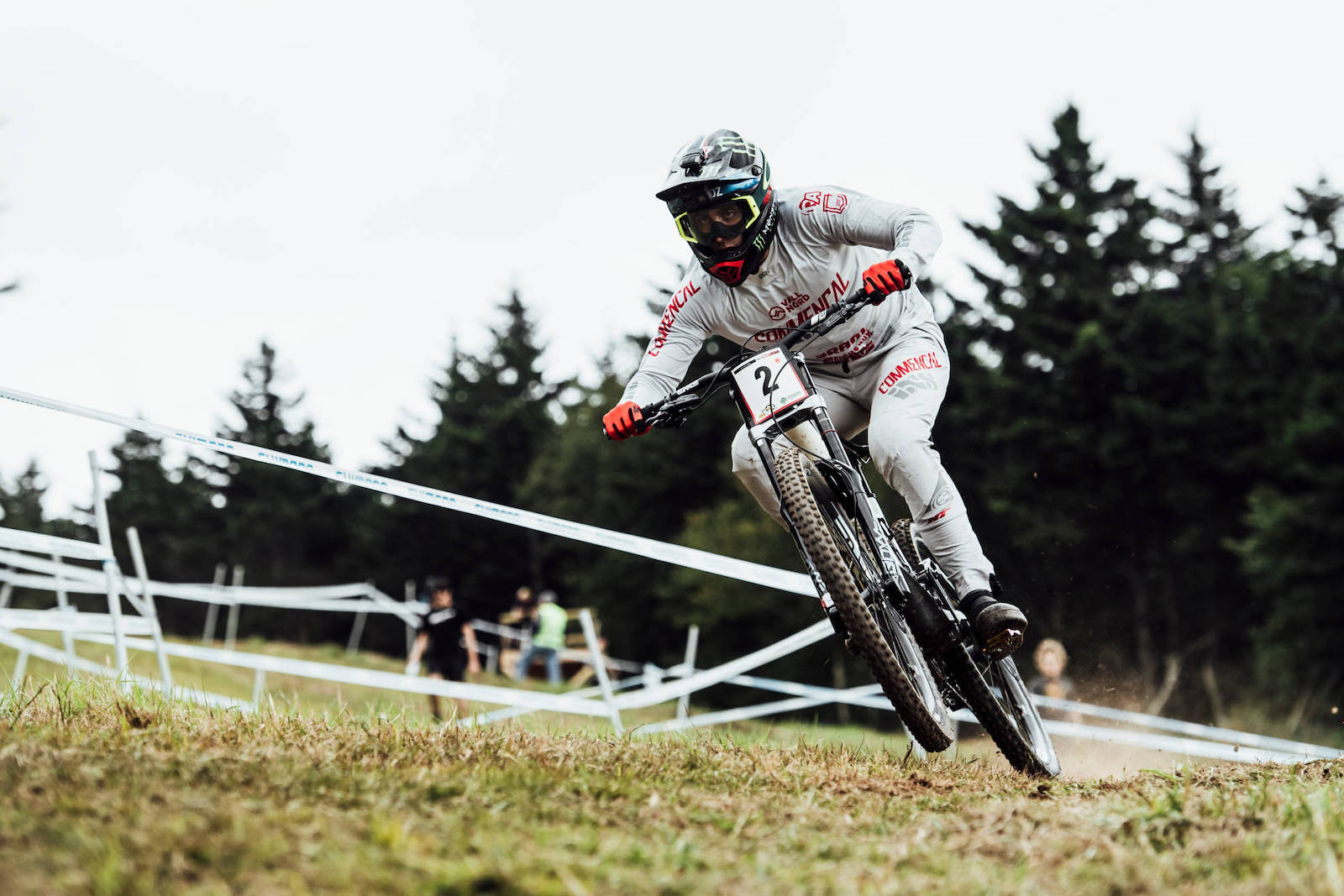 Third place in front of the home crowd for an Charlie Harrison, who threw down an incredble run on the Snowshoe track backing up yesterday’s third place in qualifying. 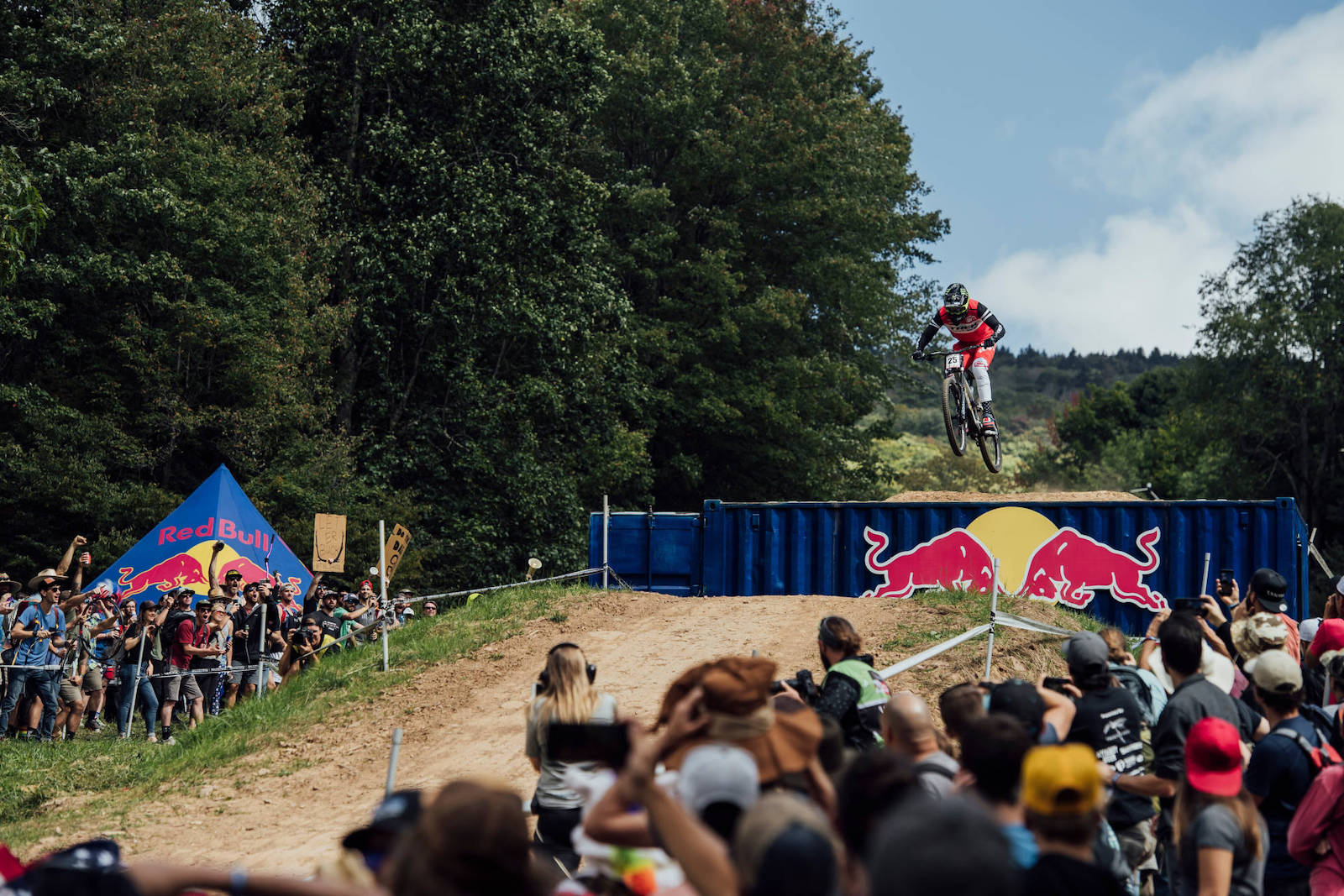 Fourth place for Loïc Bruni, who was shook with nerves because of the stakes, making some mistakes that cost him about 2 and a half seconds on Danny Hart. 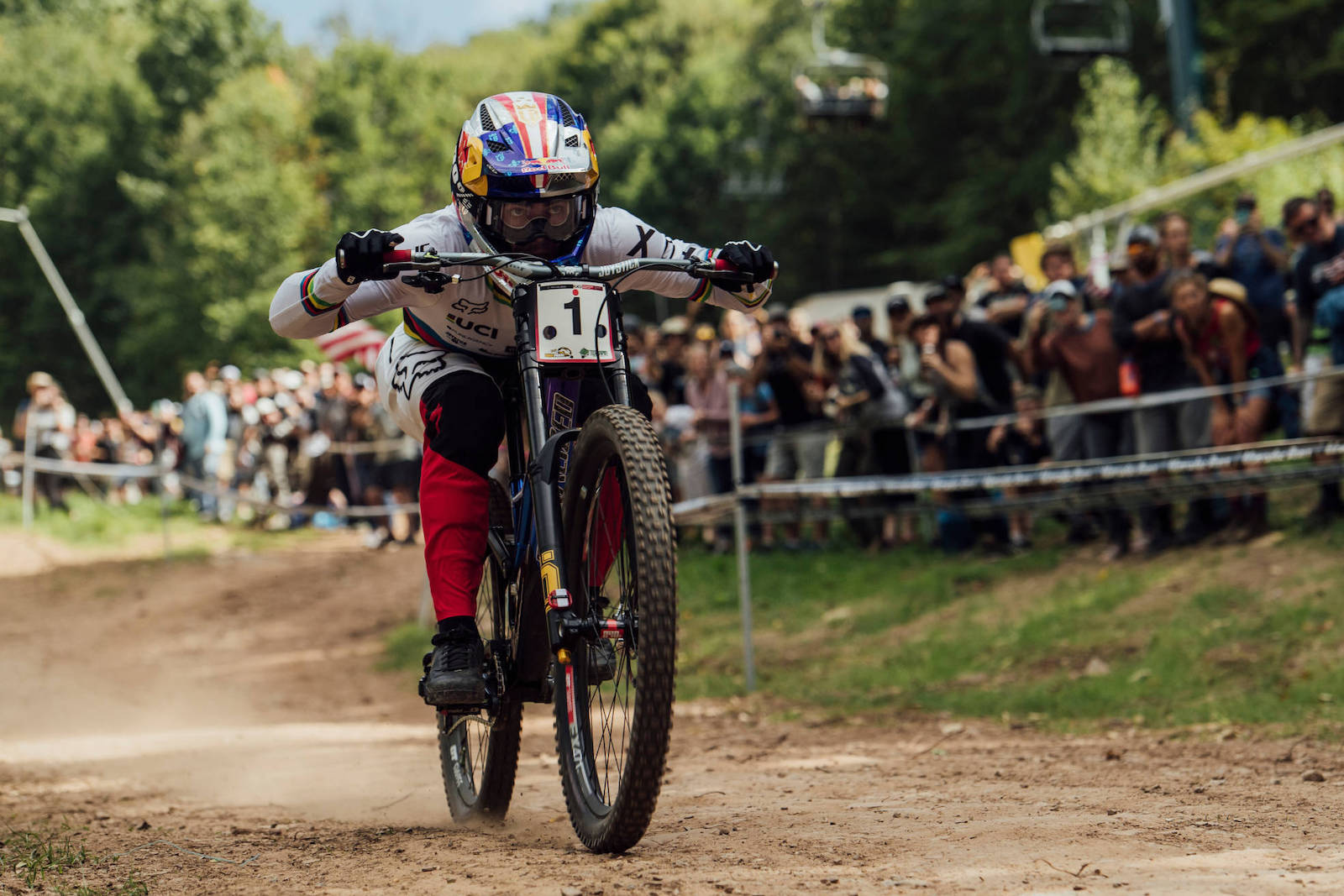 Closing the podium was Greg Minnaar in excellent shape, probably the best in the race on the initial part of the track, putting his unparalleled precision and flowy skills to good use. 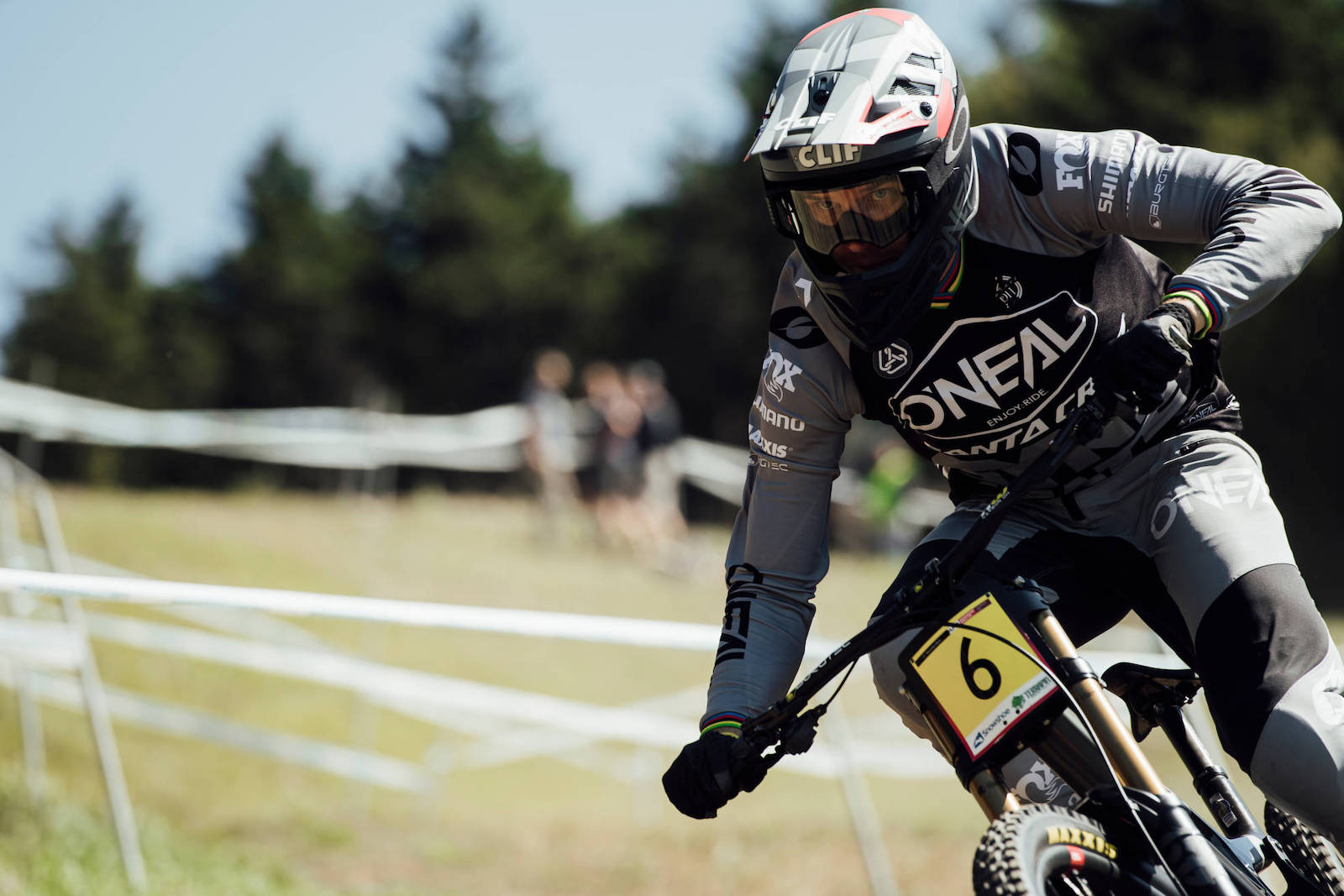 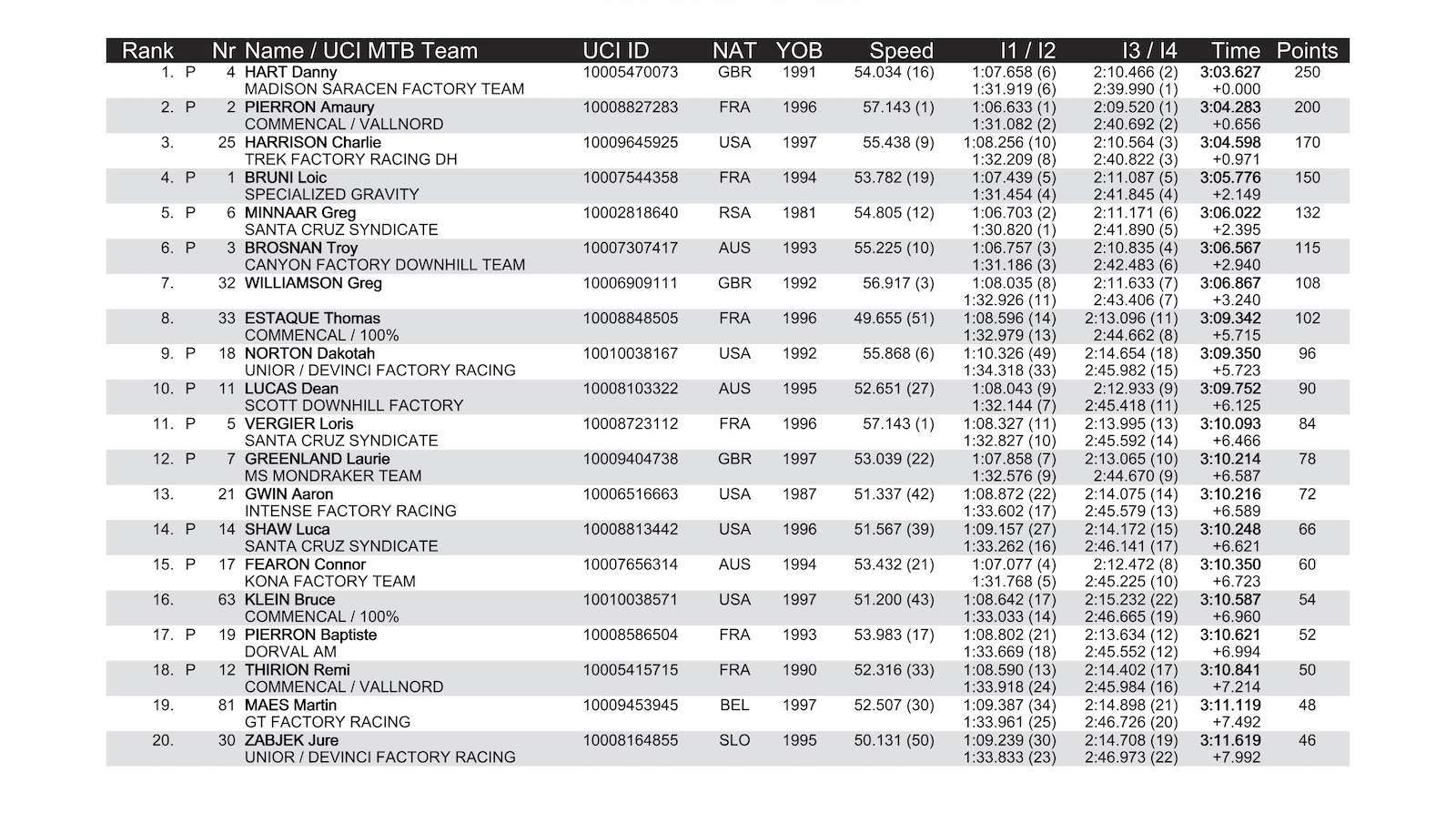 In the women’s race it is still France that dominates with the growing talent Marine Cabirou who is acquiring more and more awareness of her abilities, landing an impeccable run that brought her back to the top step of the podium, in front of her compatriot, newly crowned world champion, Myriam Nicole. 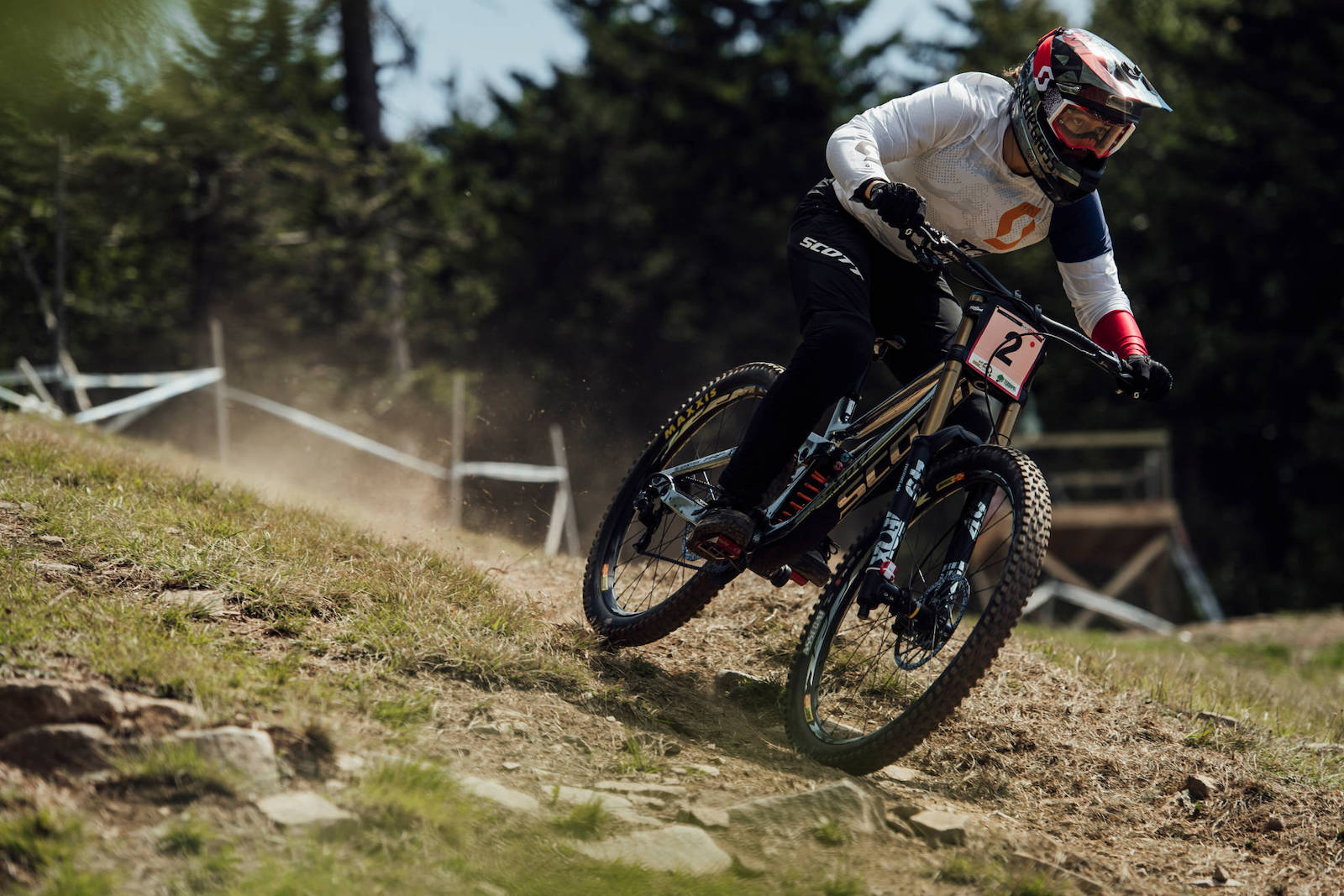 Excellent performance by Veronika Widmann who earned the third place spot less than 3 and a half seconds behind Cabirou, also climbing to a prestigious third place in the overall standings. 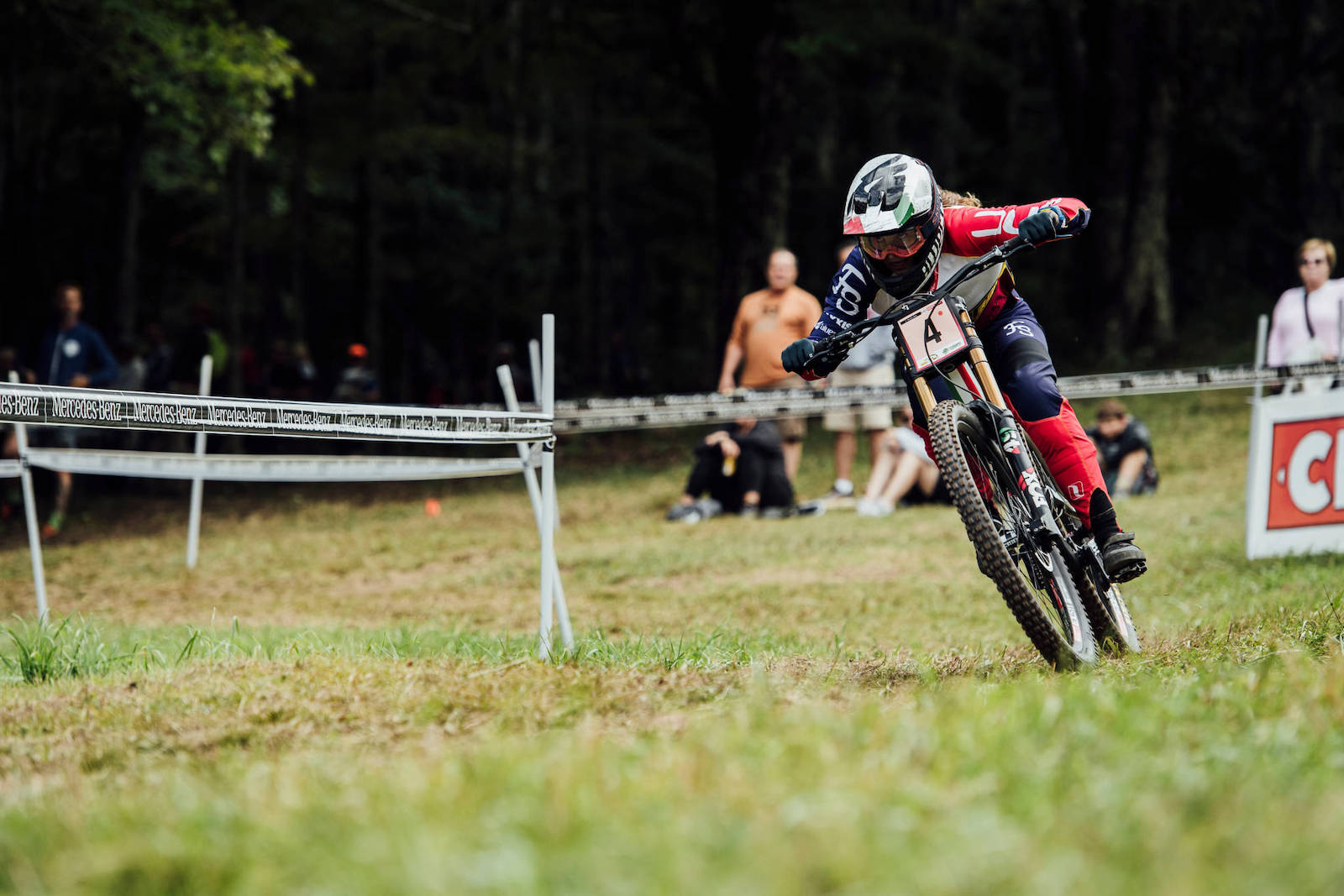 Fourth place for Tahnée Seagrave who evidently has not yet fully recovered her physical form after an injury while Tracey Hannah, fifth at the finish line, ran a tactical race, riding in a rather conservative way to avoid taking risks and obtaining the necessary points to keep the lead in the overall standings on her closest pursuer, Cabirou. 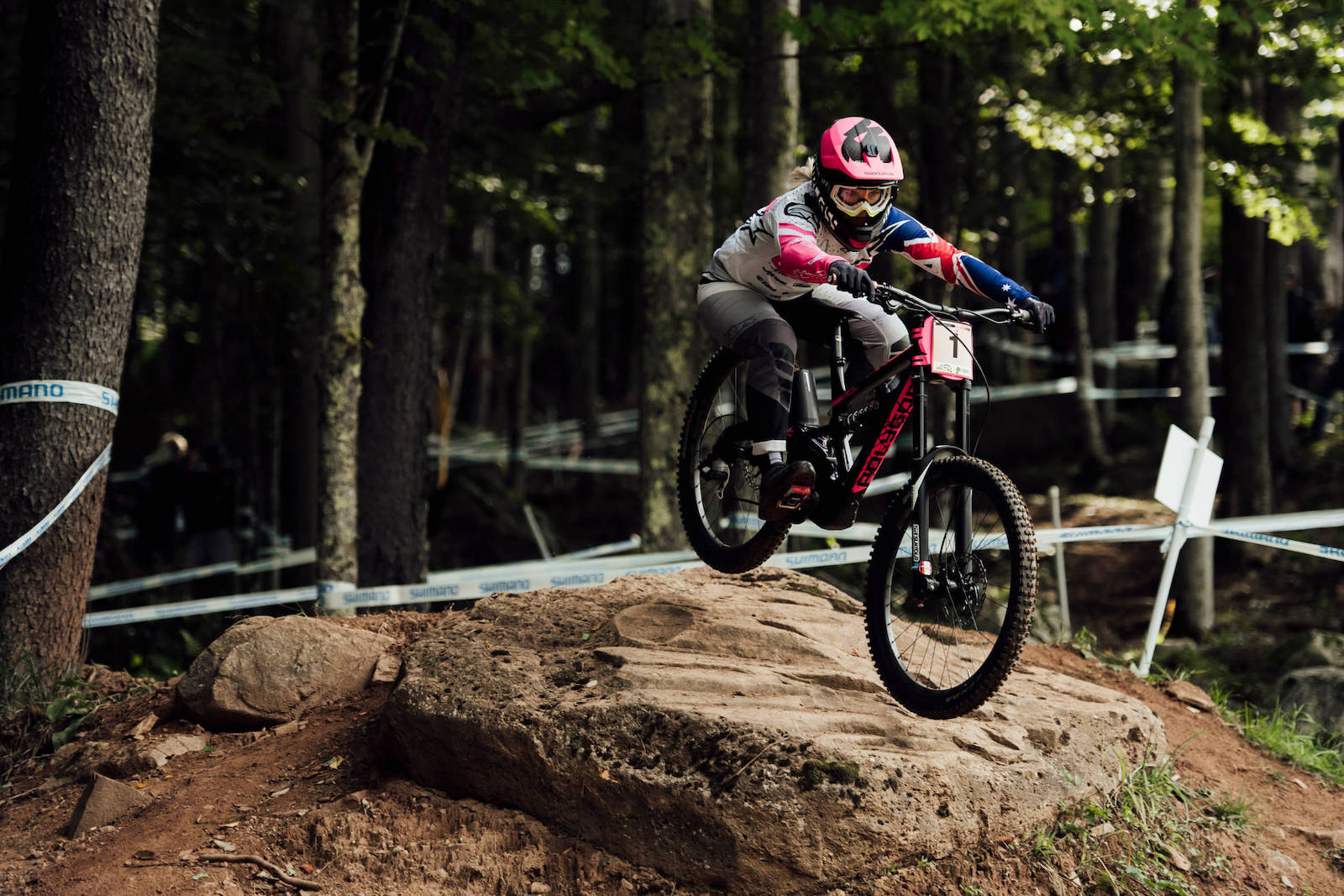 The French champion in fact, despite the stage victory, ended the overall with 30 points less than the Australian who can thus raise the trophy of the UCI DH World Cup 2019 overall. In the Junior categories Snowshoe confirmed the results of the season, with the two rulers of their respective categories, the Frenchman Thibaut Daprela and the Austrian Valentina Höll who set the fastest times by winning the final race and winning the overall for the circuit.