With balmy weather on a dry track that many riders were vocal in lamenting for its lack of technical sections we are back in Leogang. Unfortnately, Loic Bruni is out and in the hospital with a massive hematoma on his thigh, and French fan favorite Remi Thirion out after a gruesome crash on the finish line jump. 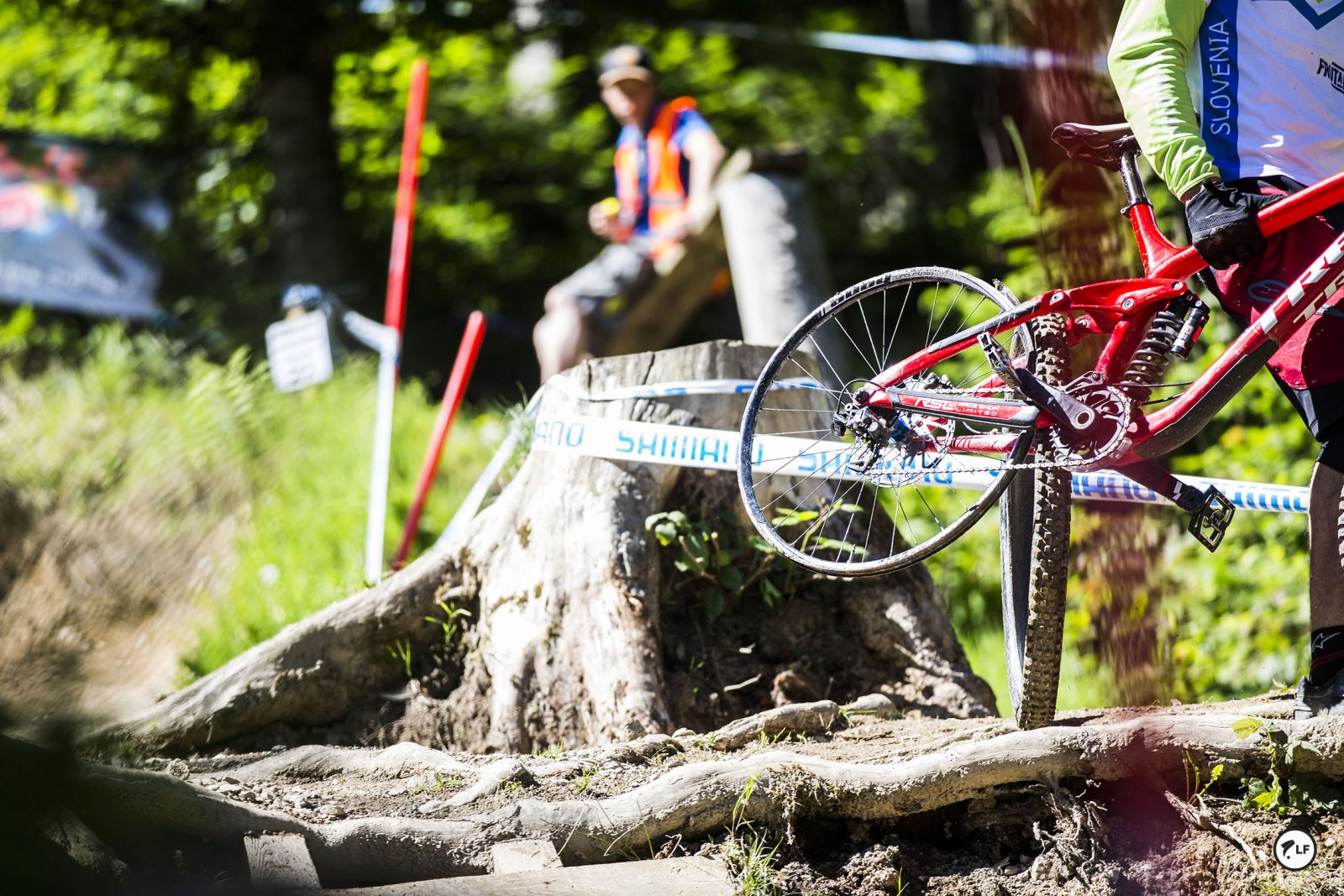 Getting into the top end of the men’s field, Phil Atwill had the hot seat for a fair bit. When interviewed about the race he asked where he could find a gin and tonic, then said “the only dangerous features are sidewinds and high speeds”…He was eventually upset by the Dean Lucas, who unironically was on a 29” prototype Intense. 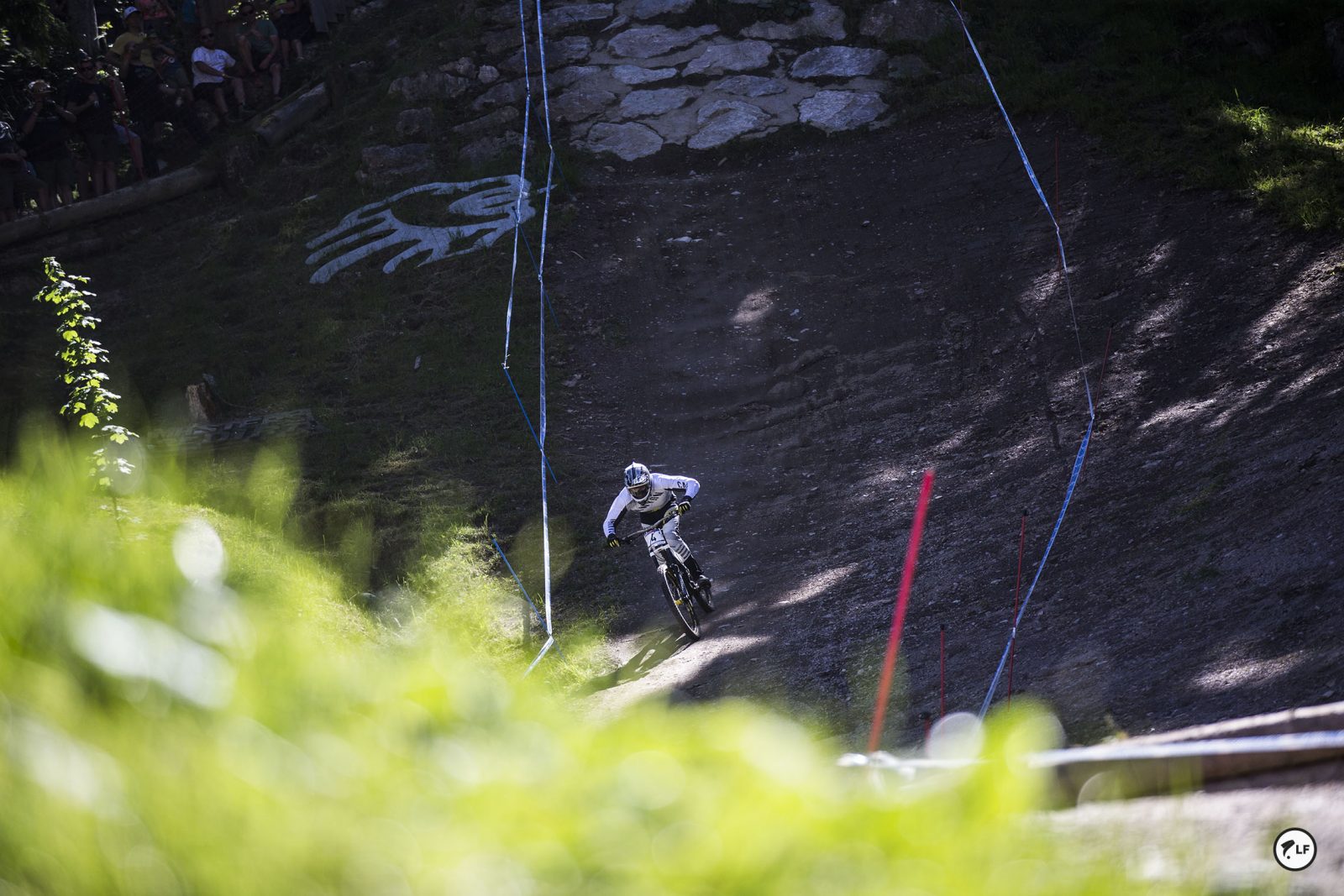 Mark Wallace had a crazy run. He broke a chain, was down at the first two splits, then somehow was up at the 3rd split. Eventually his chain wrapped up into his wheel and he lost his speed. Between this and Aaron Gwin’s win with no chain it speaks volumes about the track but also is indicative of how much drivetrain interference Horst link bikes tend to have.

Young Slovenian, Jure Zabjek held the hot seat for a good while until Jack Moir (2nd last week) upset him by .7 WITH a crash that he recovered from with lightning fast speed. Connor Fearon had a blazing run destroying corners left and right, but just barely missed edging out Moir. Luca Shaw came down and bested Moir by nearly 2 seconds with a freakishly smooth run. Danny Hart suffered a snapped chain out of the gate, somehow was fastest at the second split, then dropped back but was only 2 second and change off of the hot seat. Bernard Kerr dropped hammers on his run, rode wild and bested Luca Shaw by about .8 second. 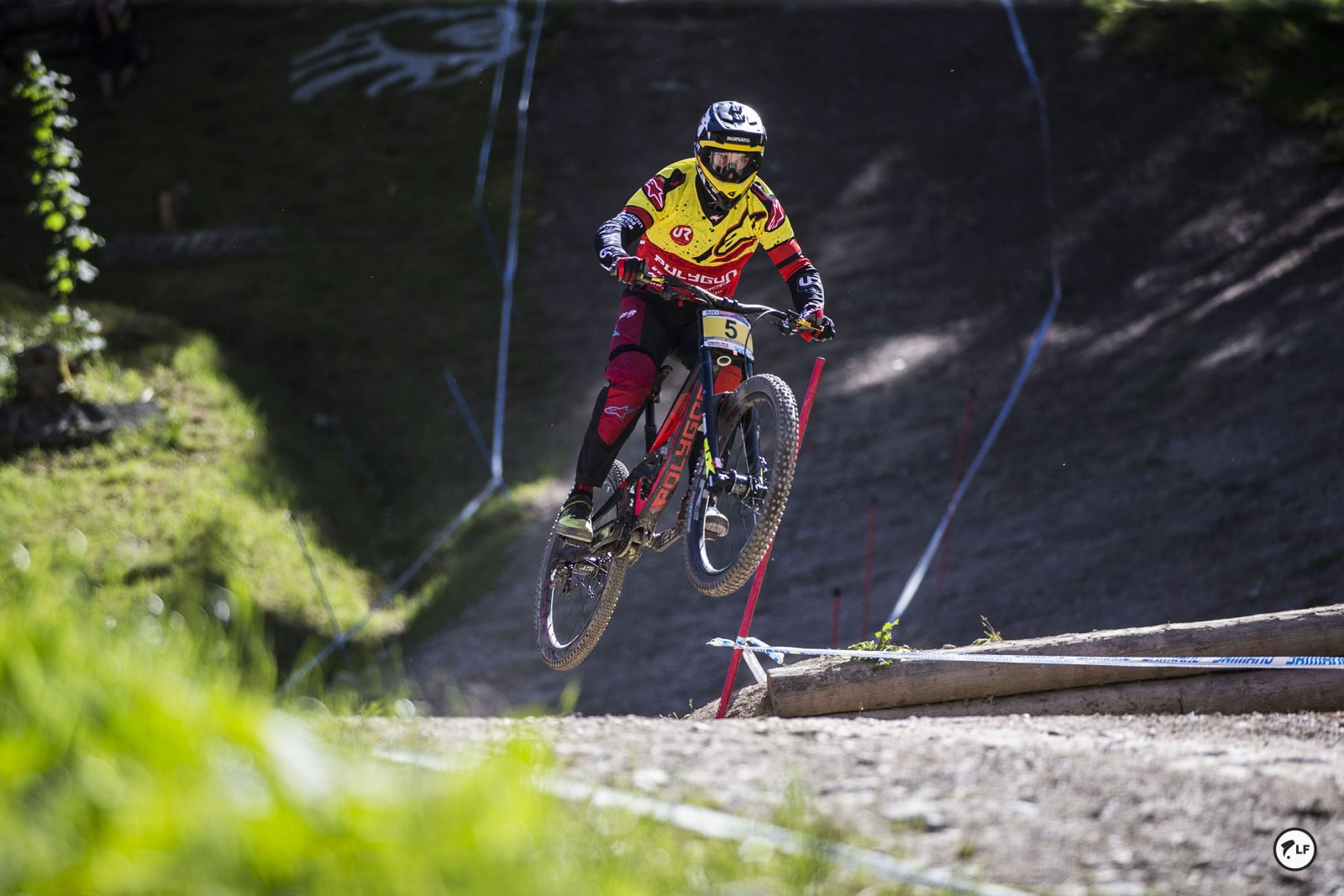 Mick Hannah had a great run but was plagued by a flat ish tire. 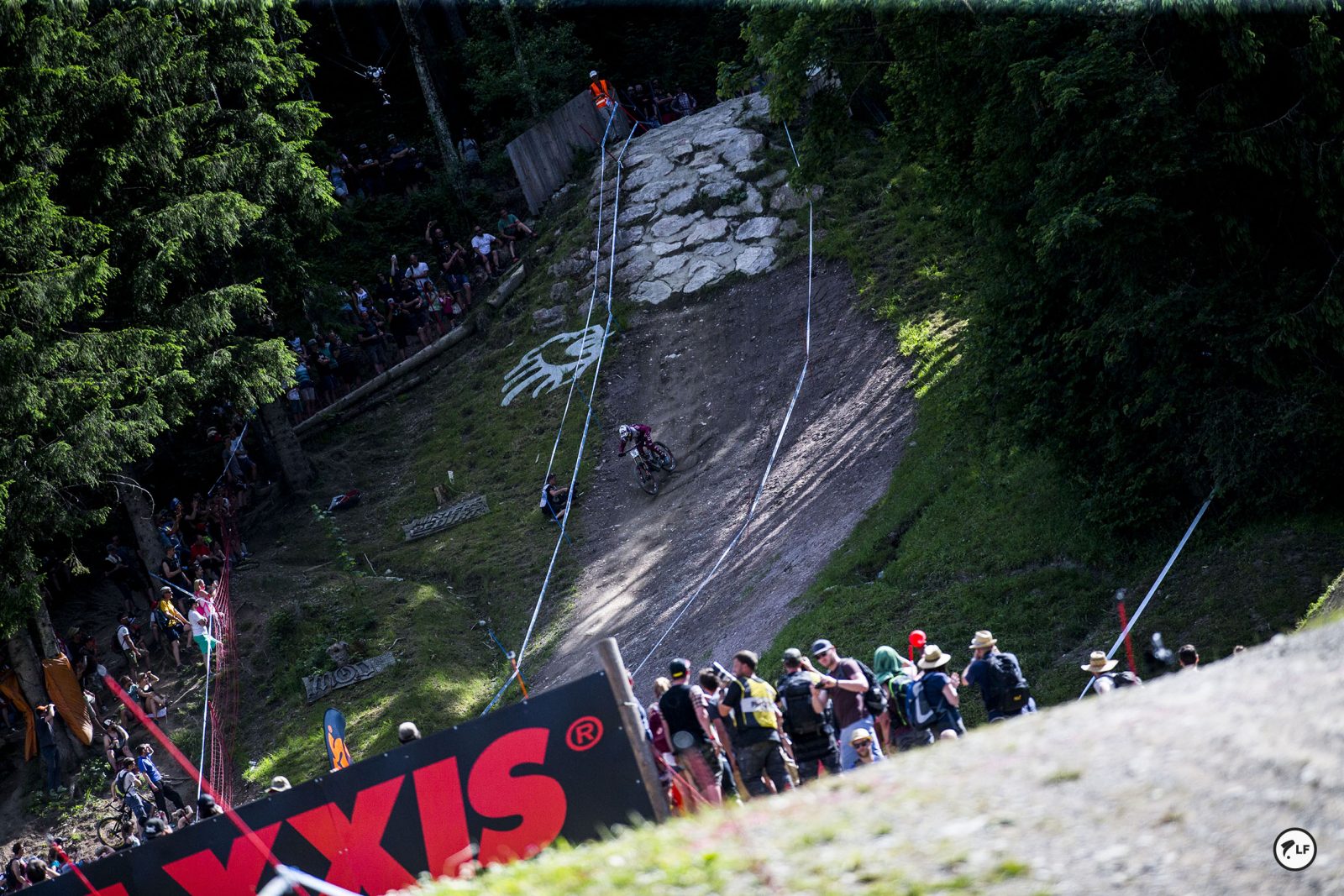 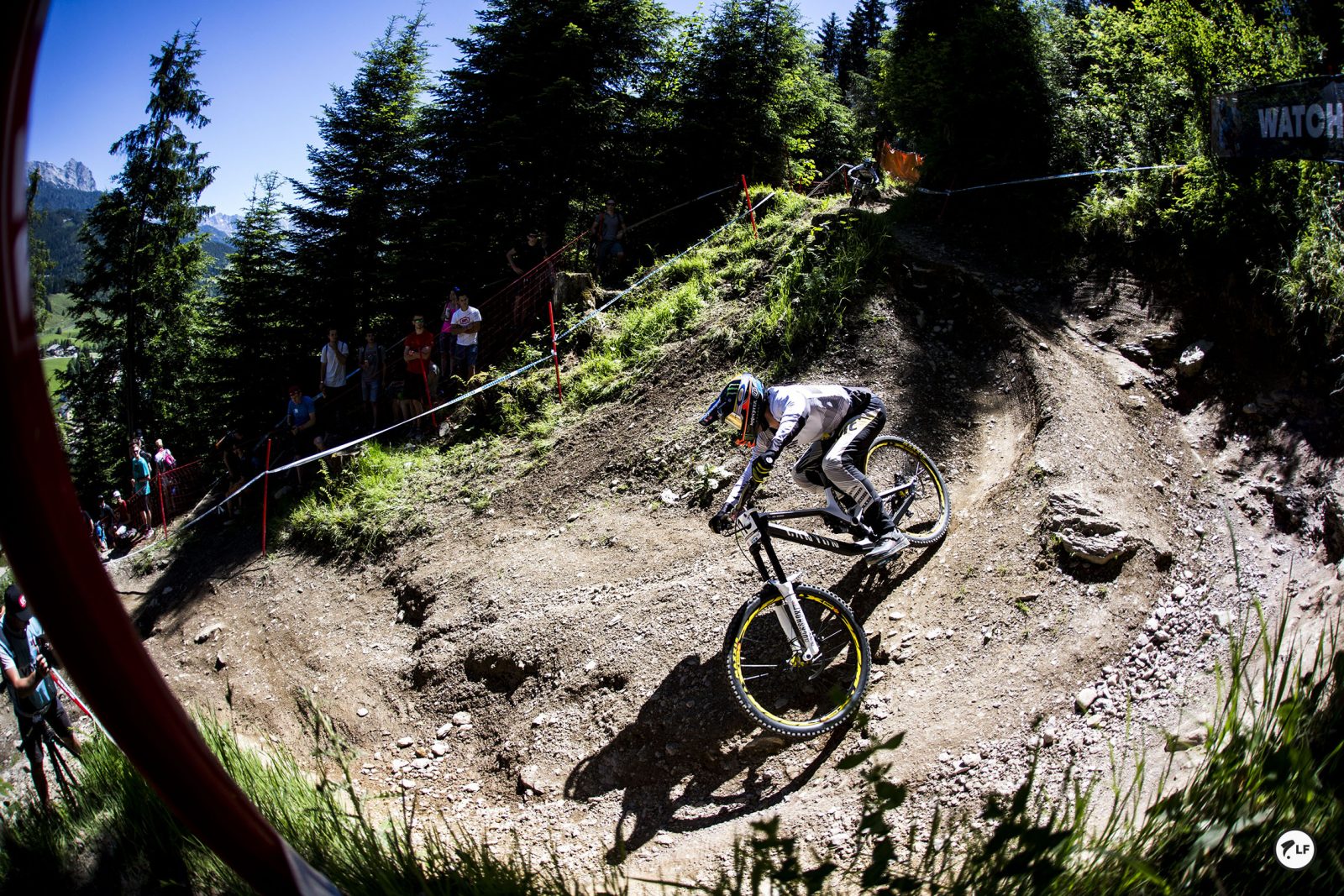 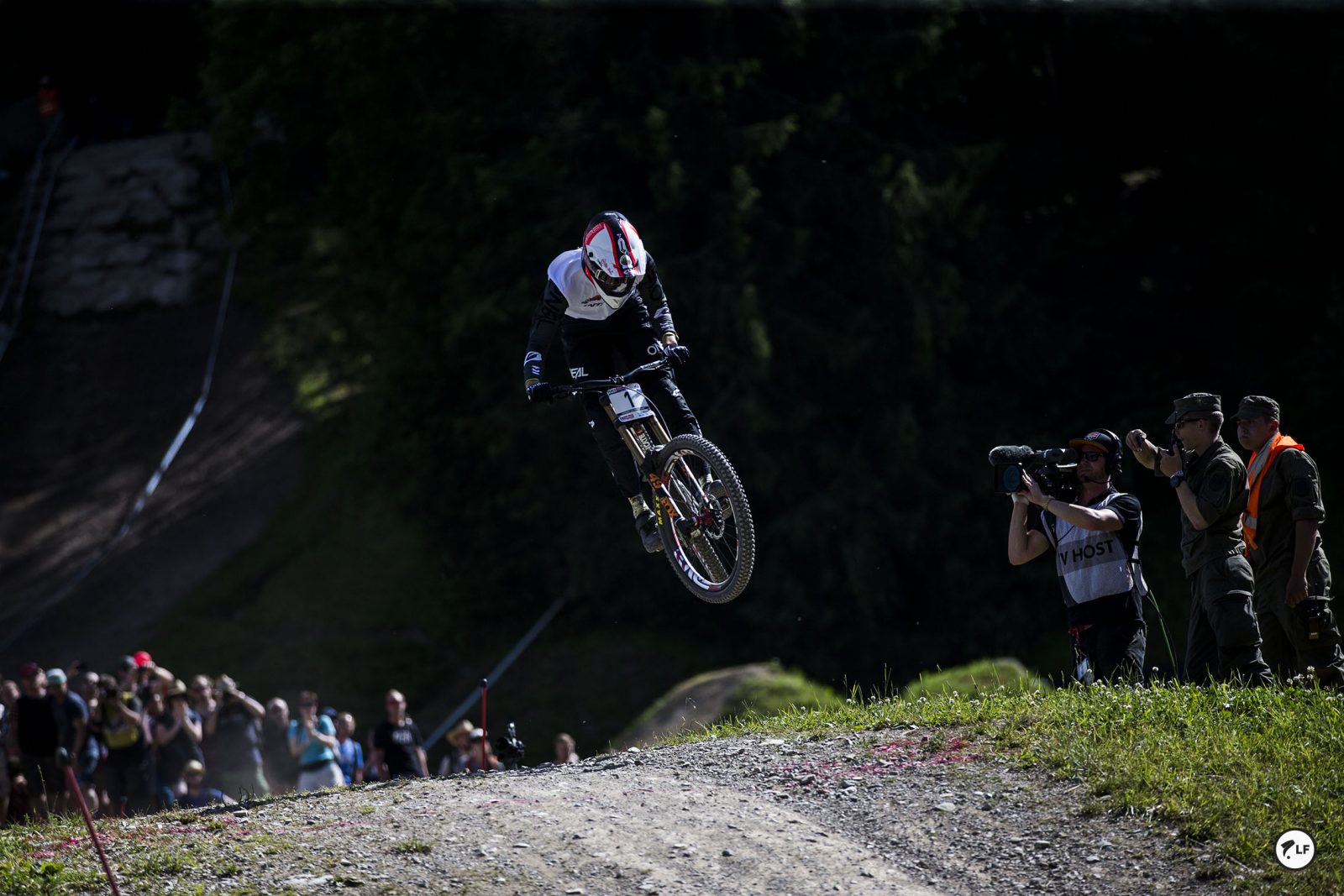 On to the top 5…Loris Vergier picked up time at every single split to toss his team mate Luca Shaw out of the hot seat by nearly 3 seconds. Troy had a great run but it wasn’t enough at 1.8 back; a podium run though…Minnaar had yet another incredible run and edged himself between Loris and Troy with Aaron as the last man on track… 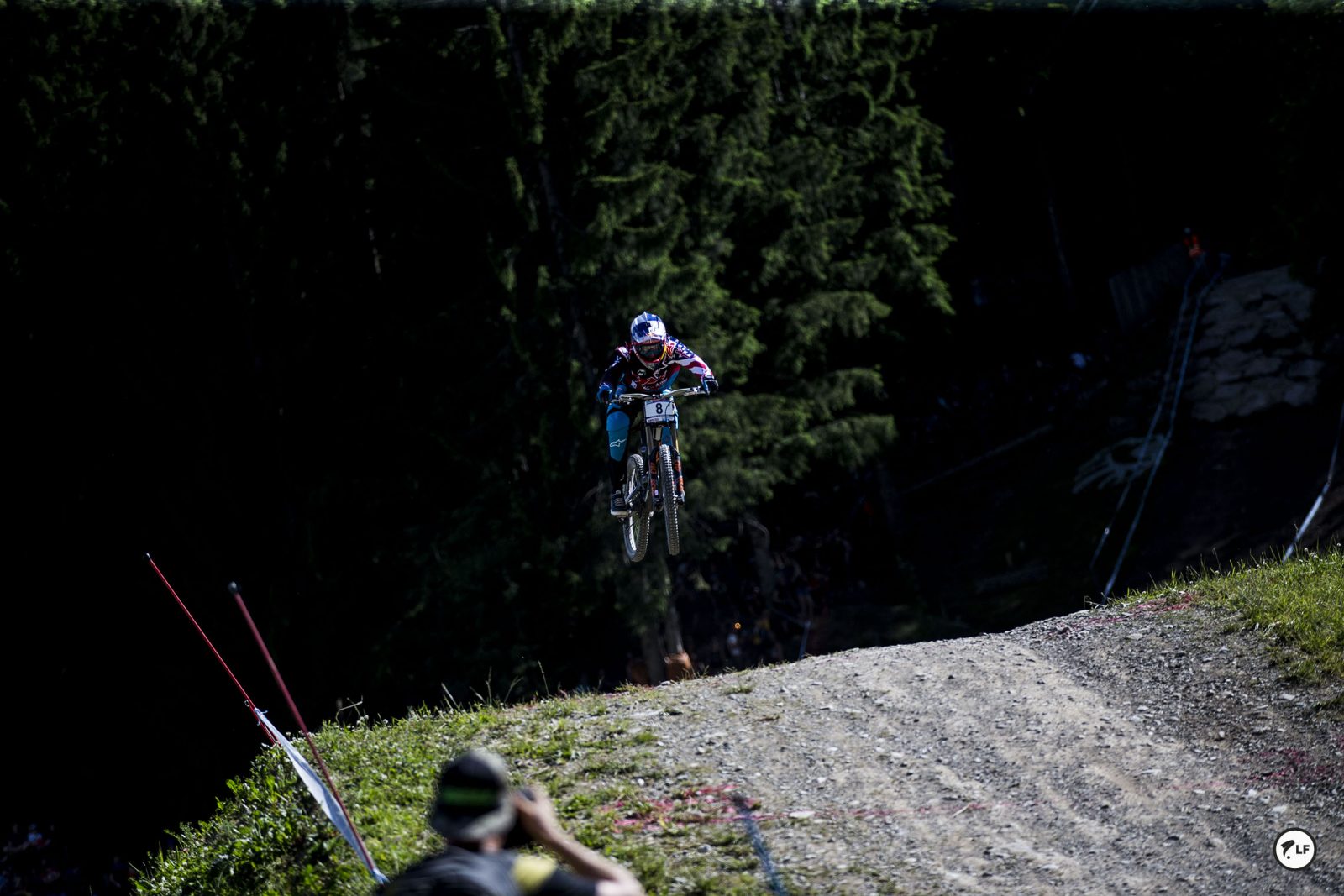 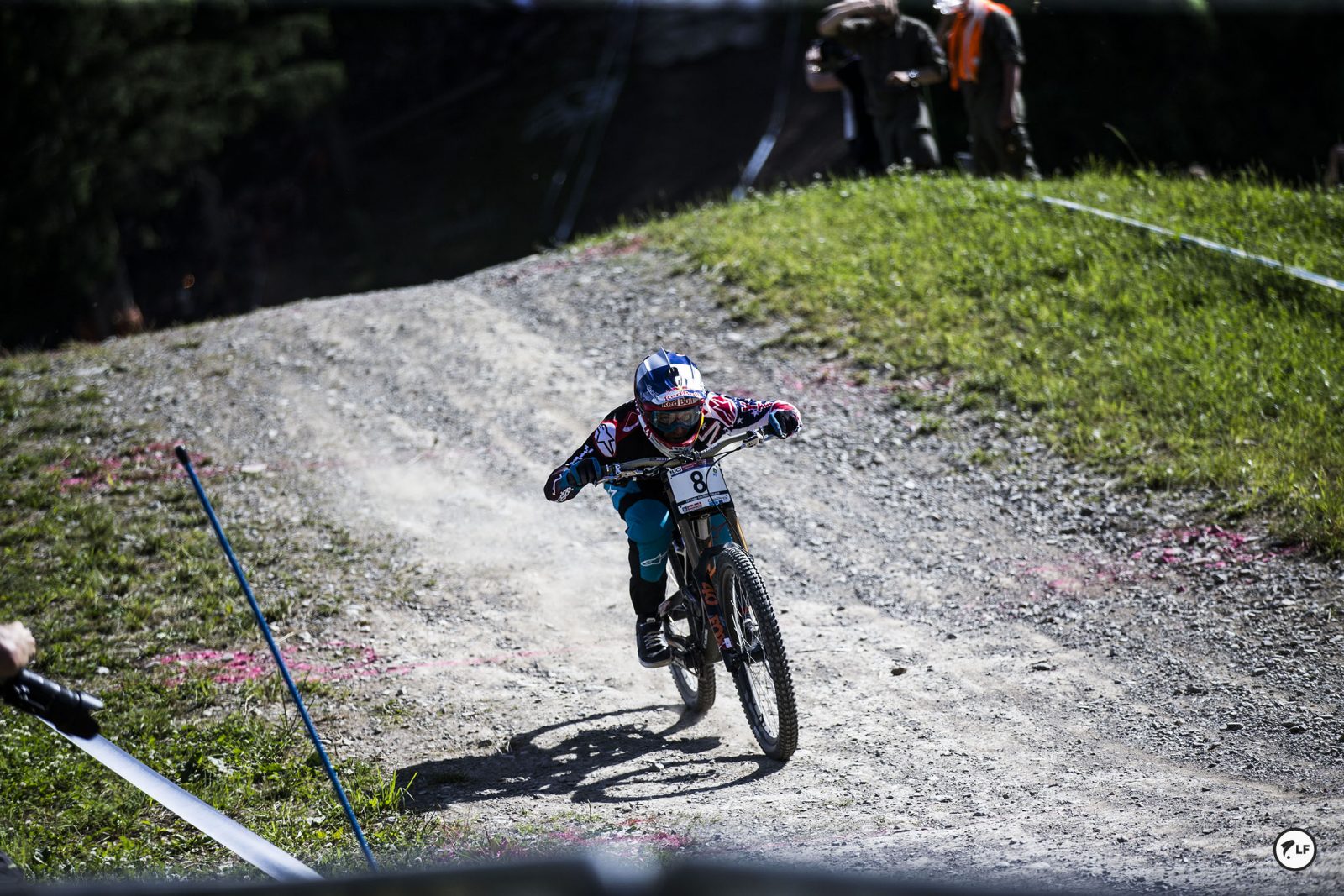 GWIN. By 1.43 seconds with an absolutely wild and crazy run…reminiscent of Sam Hill in his peak. That makes 17 wins for Gwin, tying Steve Peat and 3 wins shy of Greg Minnaar. 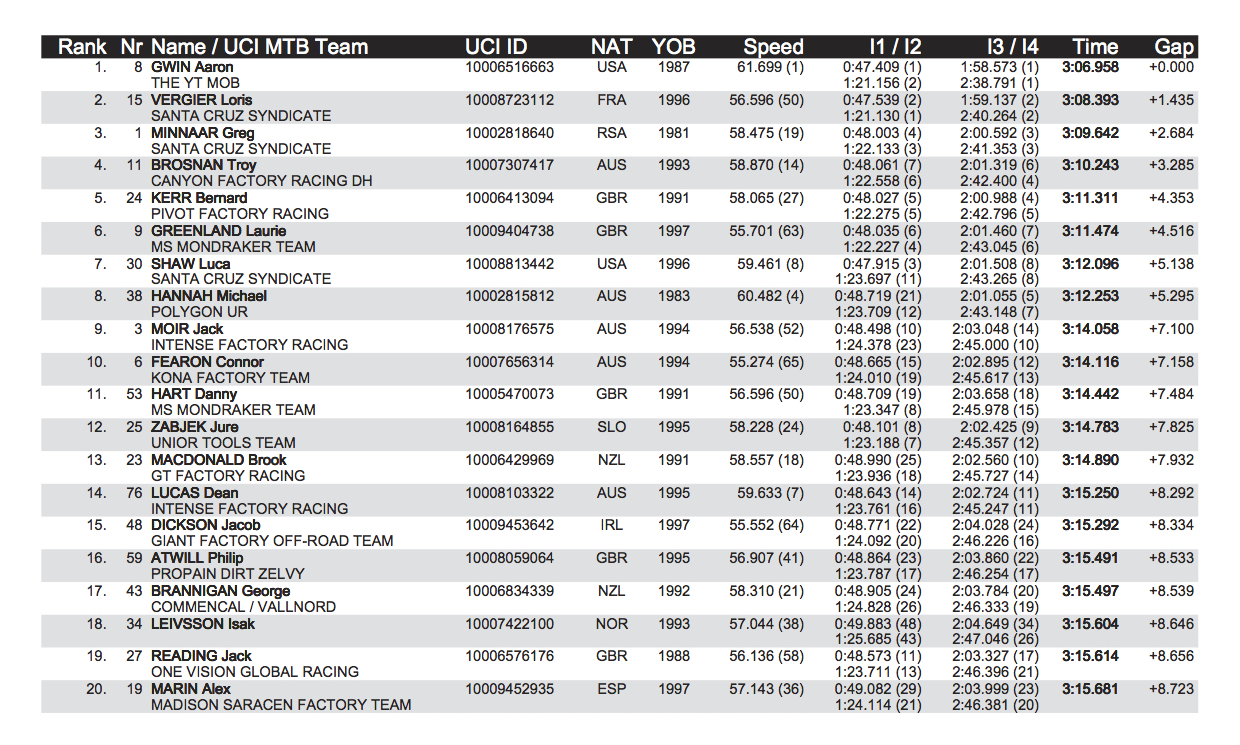 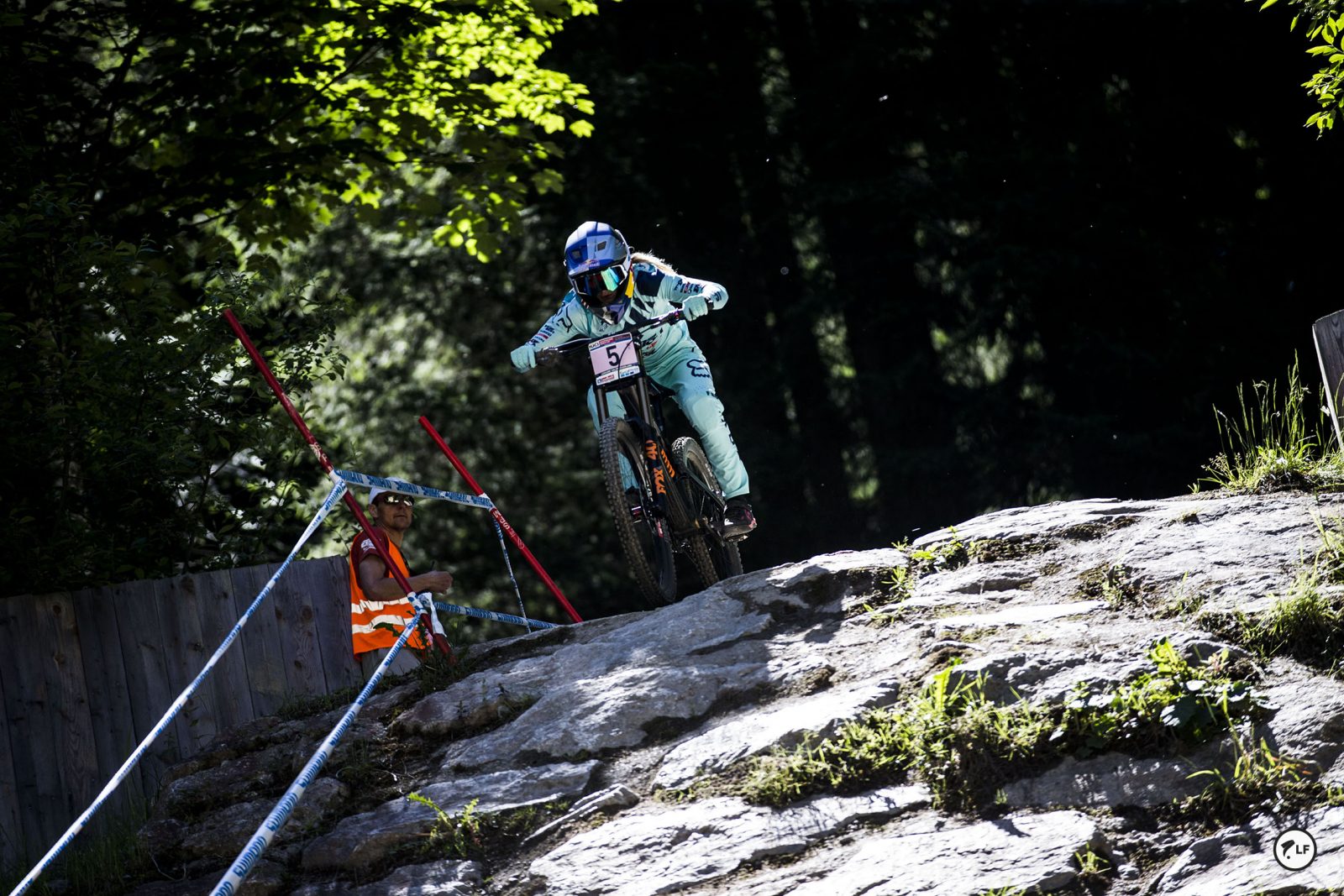 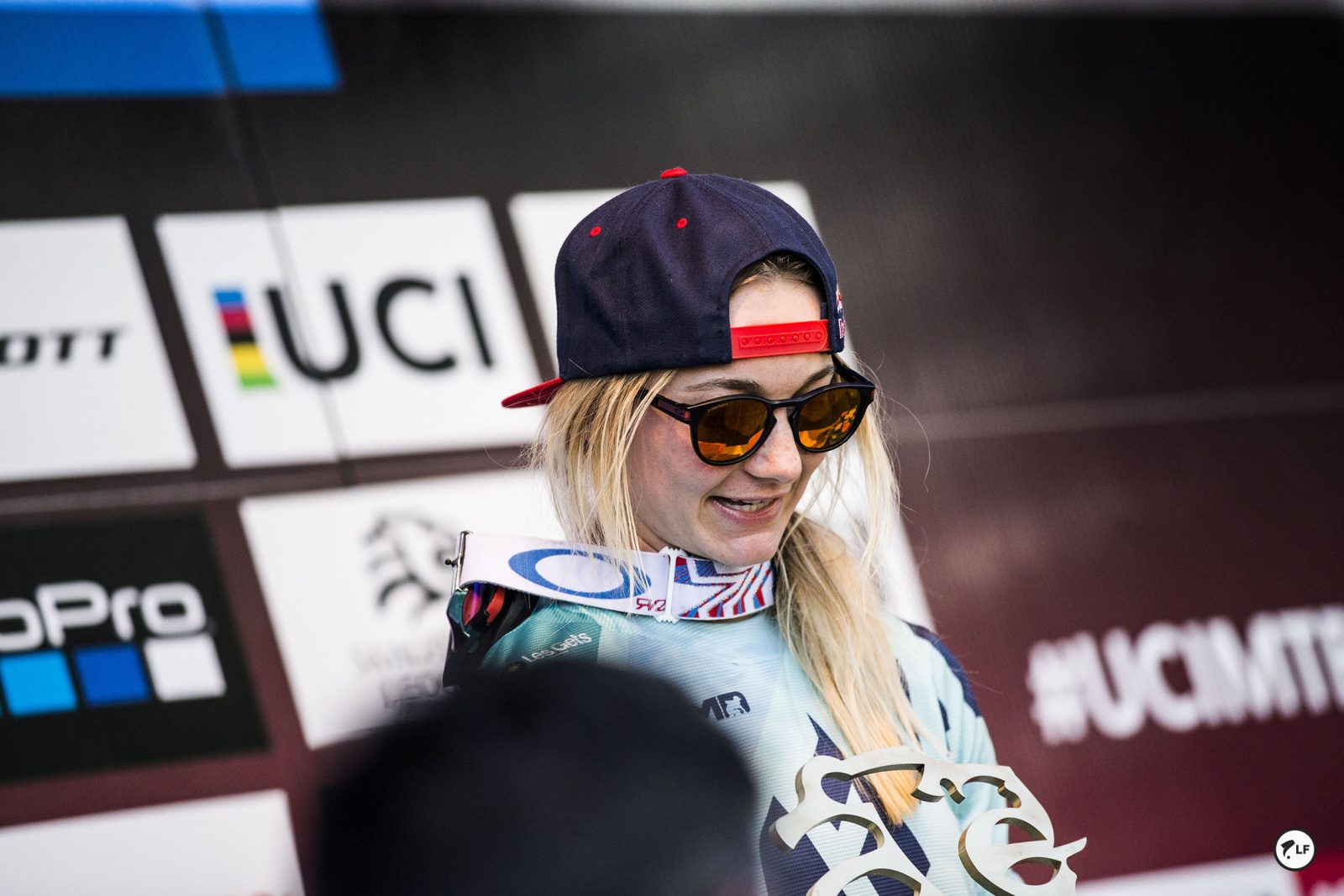 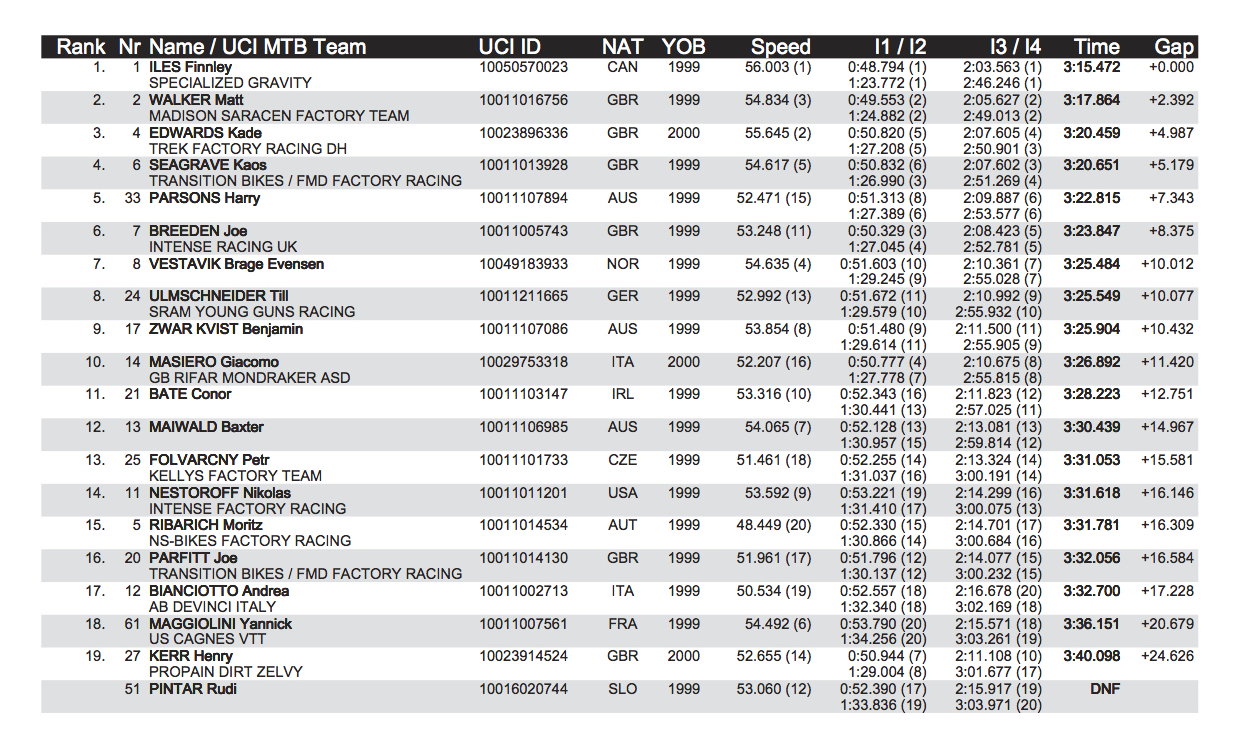 In men’s juniors, Finn Iles showed he was holding back a bit in qualifiers and busted out the win, putting Matt Walker back in 2nd place. Finn’s time would have put him in 16th in Elites…Impressive. [Video] Will 29ers Dominate in Leogang?