With a fast, dry track in Mont Sainte Anne, things aren’t looking terribly unusual results wise. Aaron Gwin took the fastest time by 1.5 seconds over Loic Bruni. Despite really good results, Aaron hasn’t been the dominant force that he typically displayed the last few years. Loic Bruni, and Greg Minnaar round out the top 3. Loic is definitely out for a big result and Greg has been quietly consistent. The overall is looking interesting… 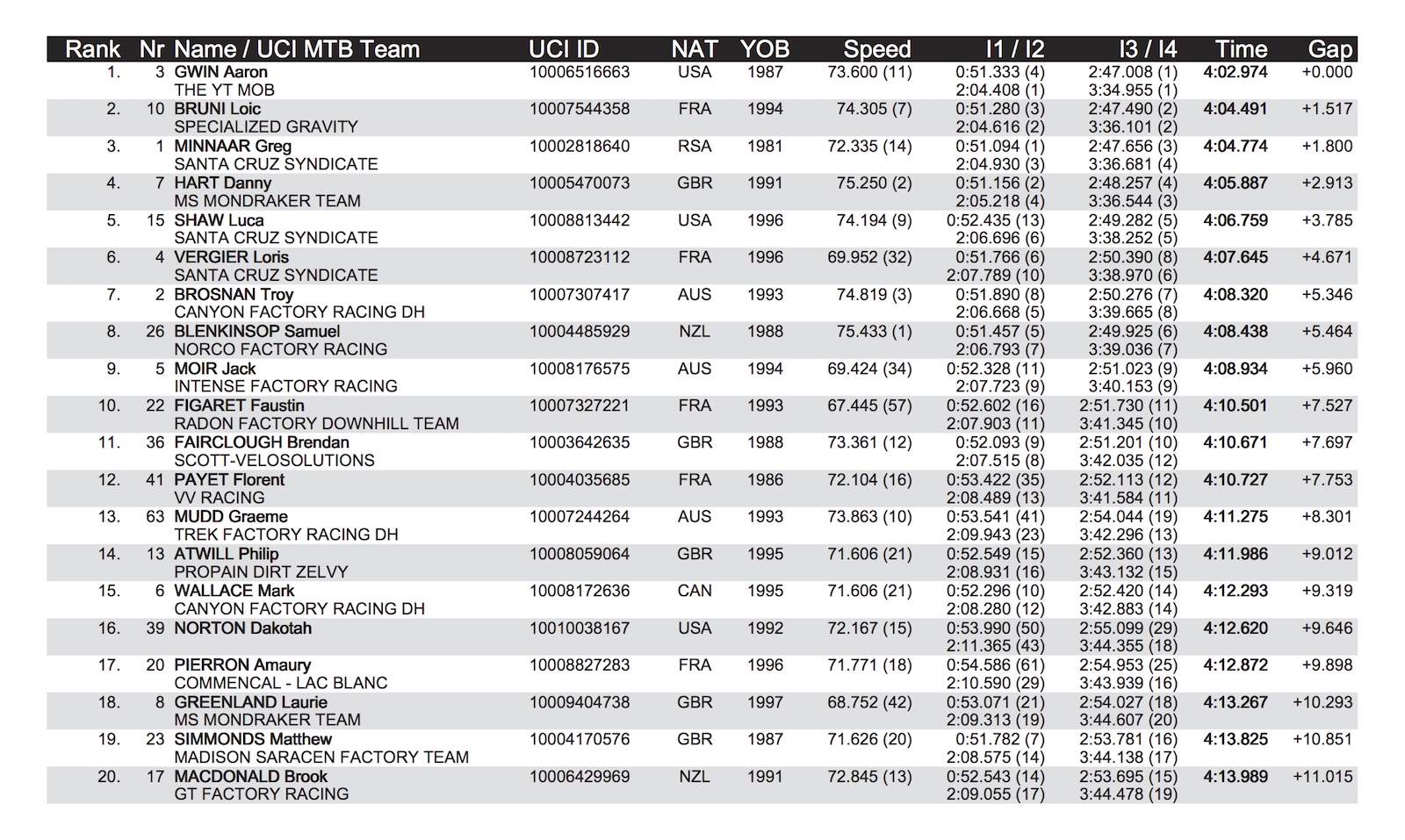 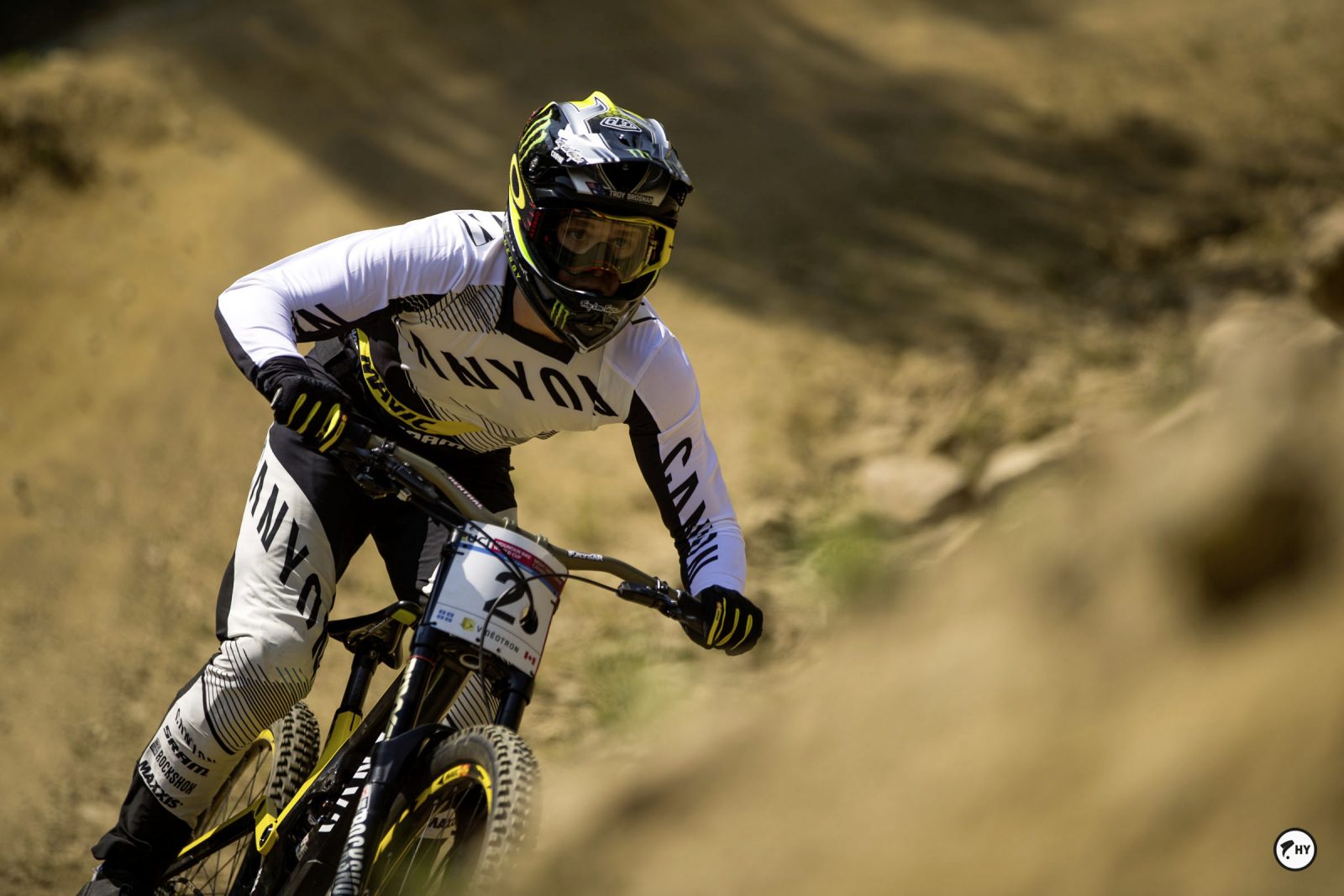 Troy has been on fire in practice…He has quietly crept up to the #2 spot. The overall very well could be his…#7 in qualies. 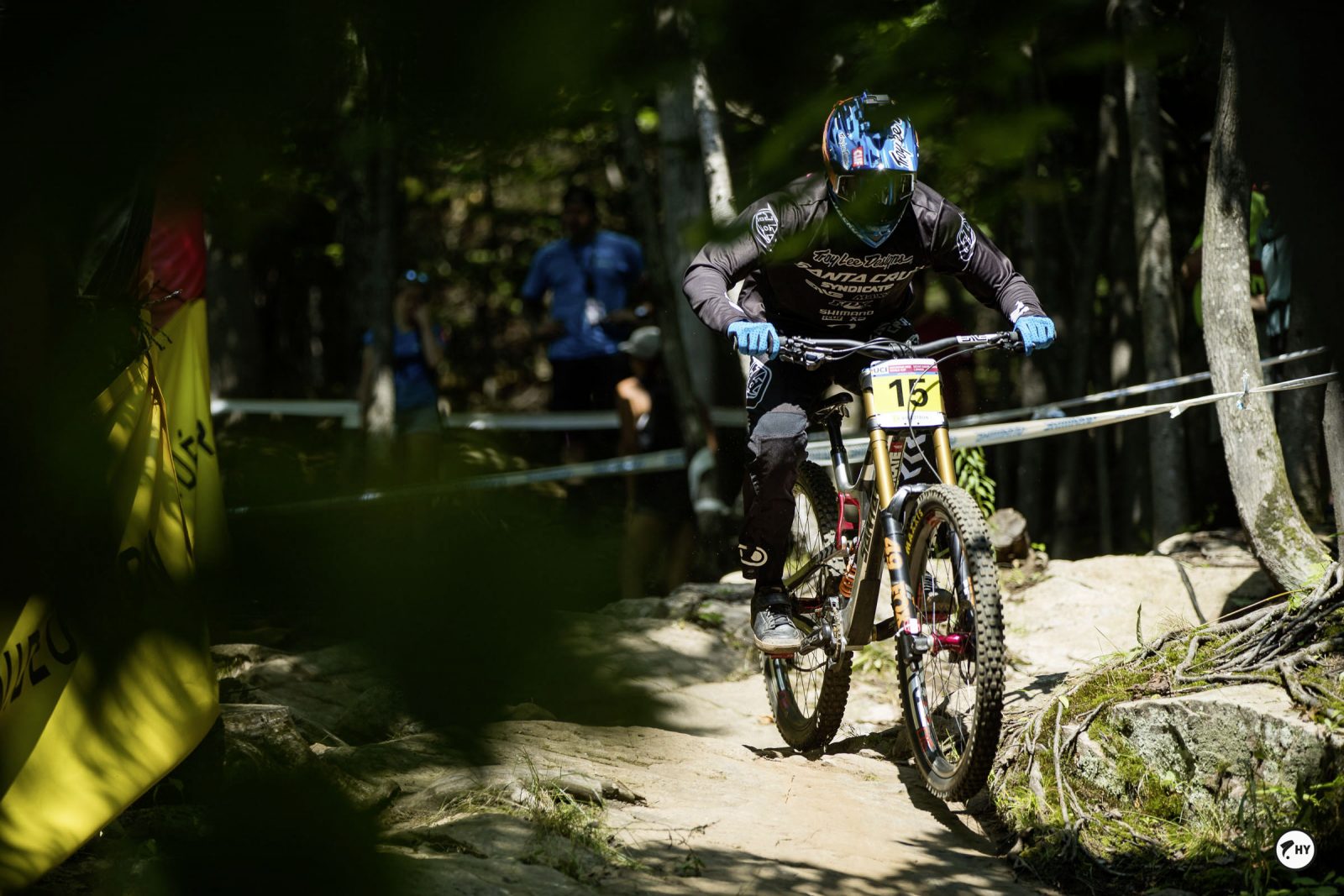 Luca Shaw has been showing incredible consistency this year for such a young rider. It’s only a matter of time until he wins one of these things…# in qualies. 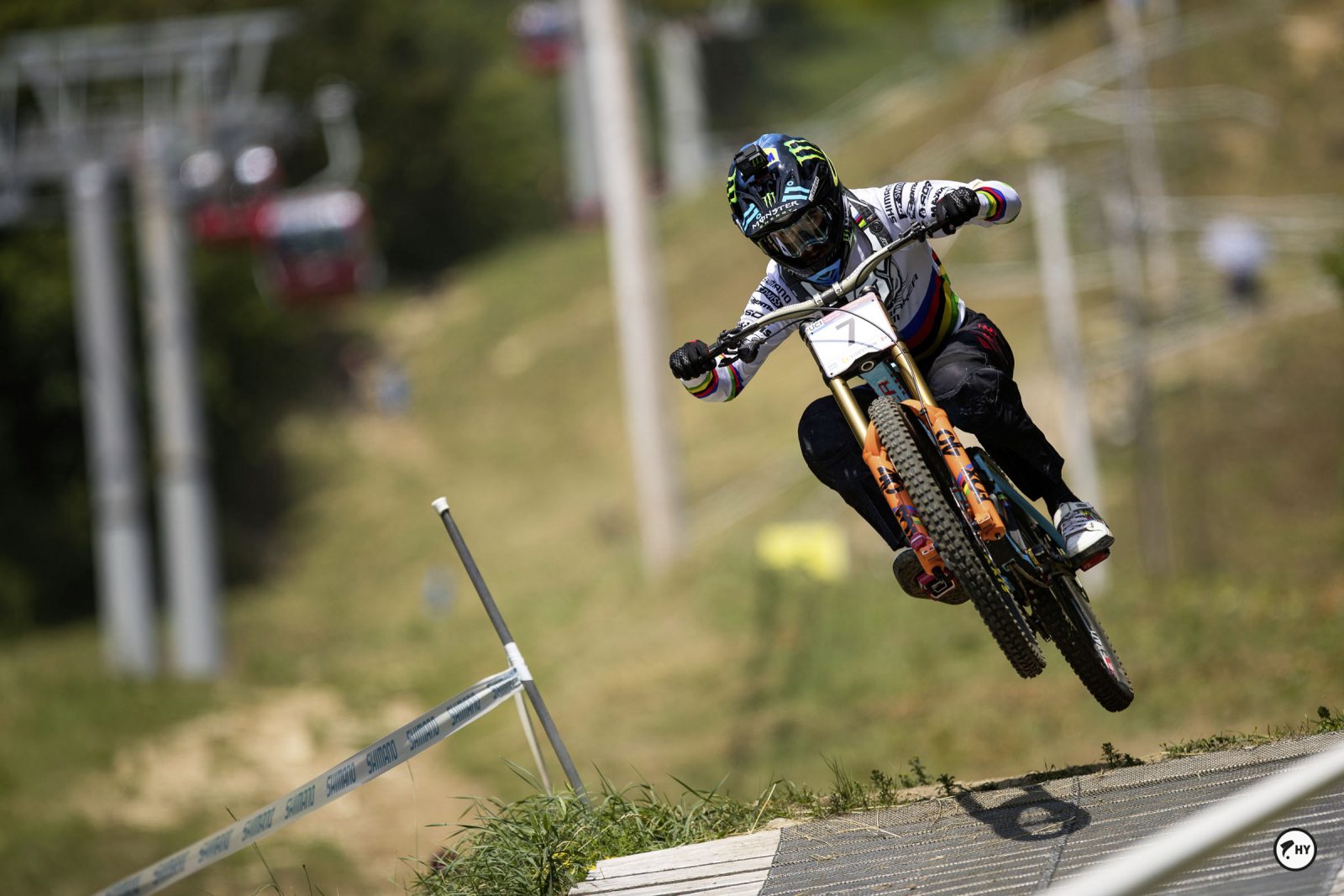 Danny Hart has been very consistent all year as well, but has struggled to find the form and blistering place that he exited the 2016 stage with…#4 in qualies. 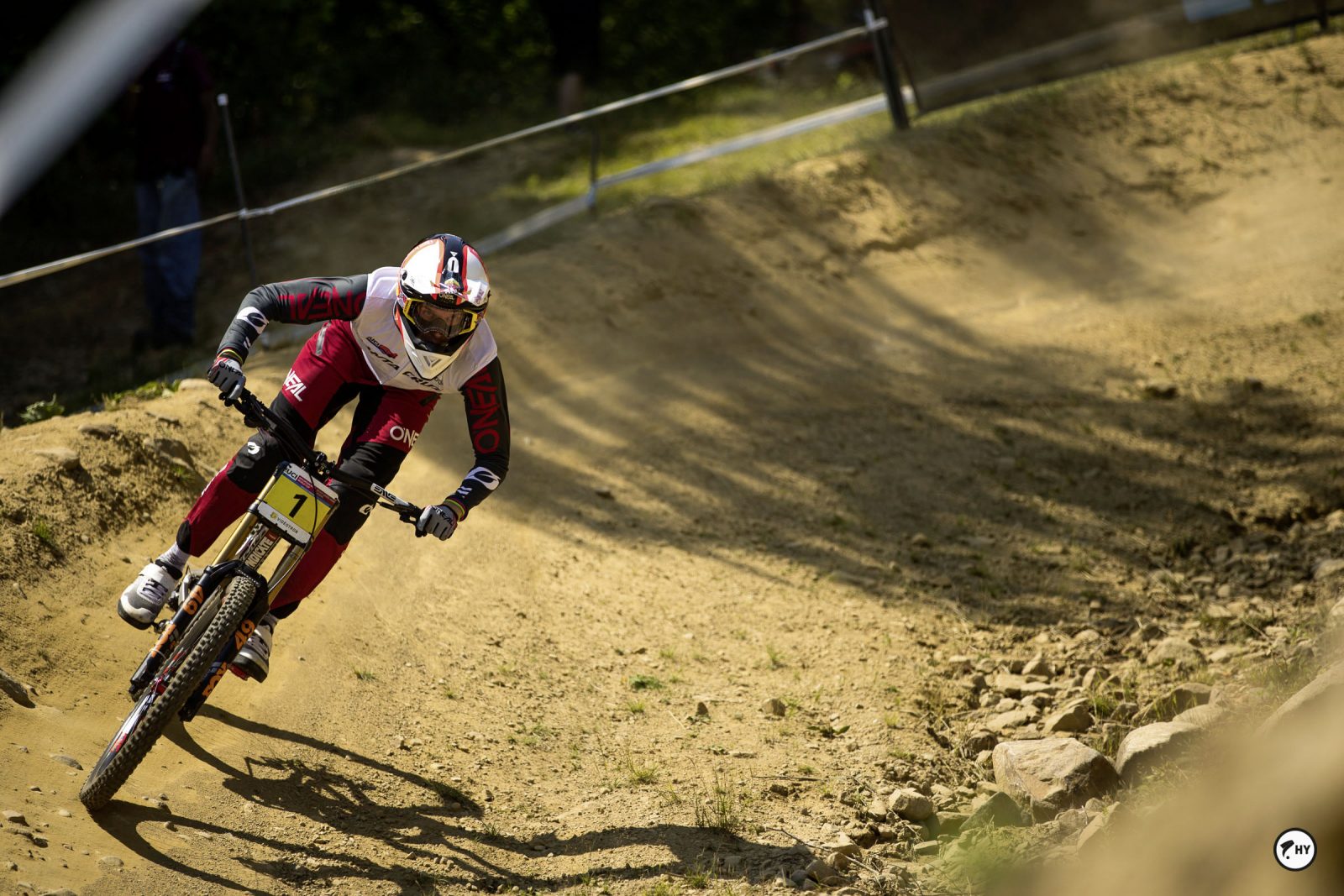 Greg Minnaar with the number one plate.  He generally fares well at Mont Sainte Anne…After all, we’d hazard a guess that he’s been riding here for longer than anyone else on the circuit.  #3 in qualies. 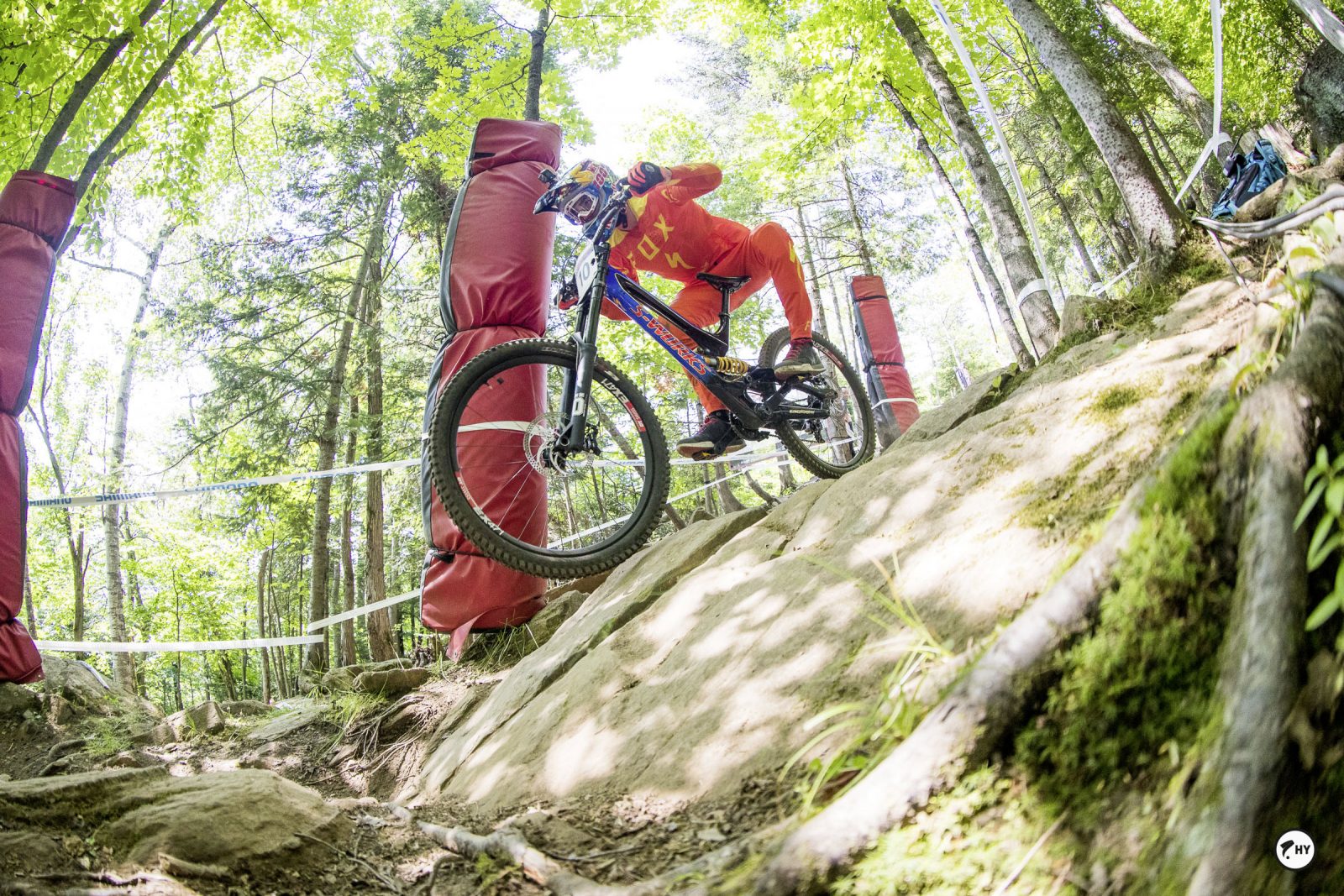 Loic has had some strong results this year, but “strong” and “solid” aren’t enough…his aspirations are massive and he wants some wins….BAD. #2 in qualies. 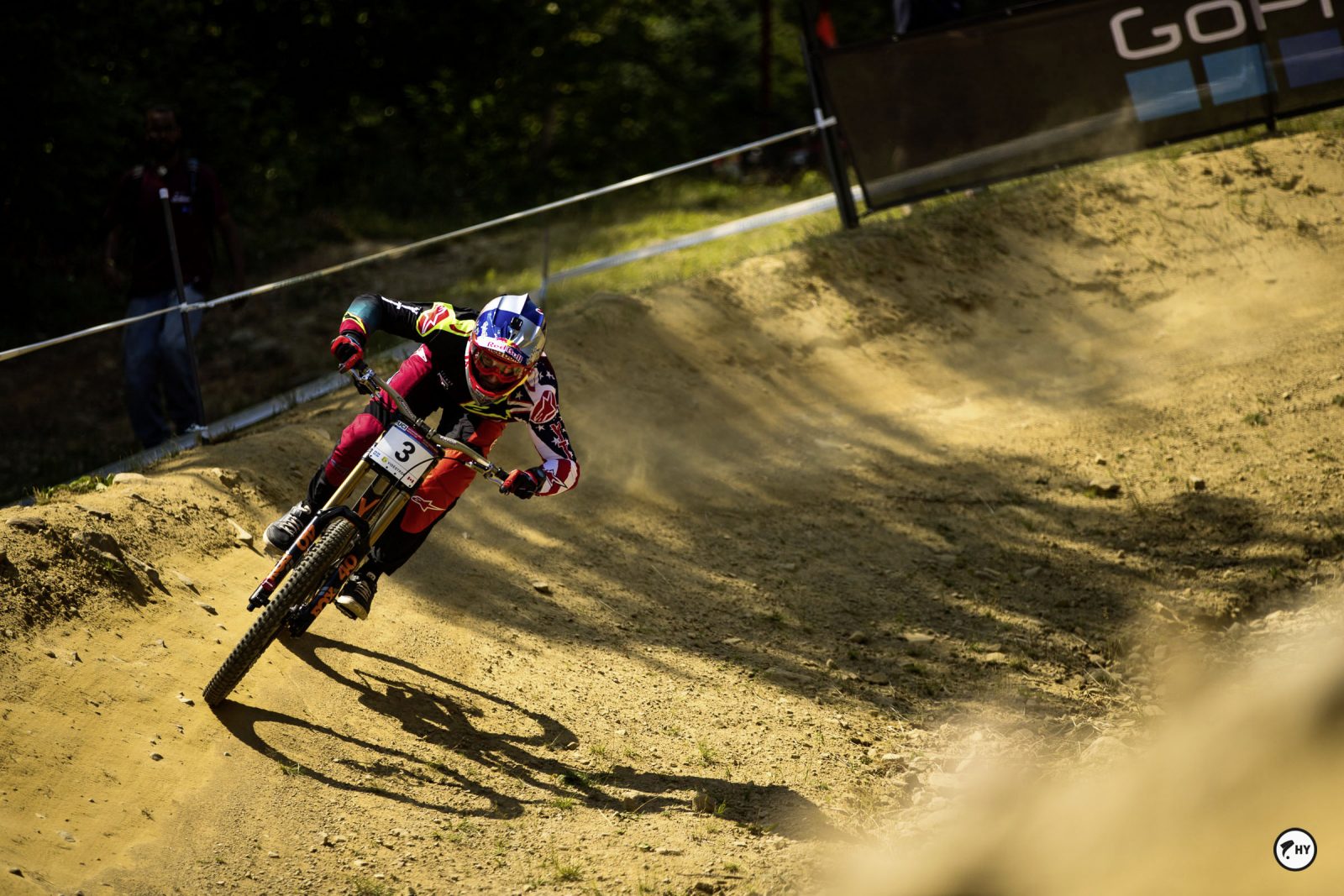 Aaron Gwin went on a tirade and qualified in the number 1 spot. He certainly has the pace and tenacity to win on any track on the circuit. With MSA being rough and physical, he could definitely take the win here as he’s freakishly fit… 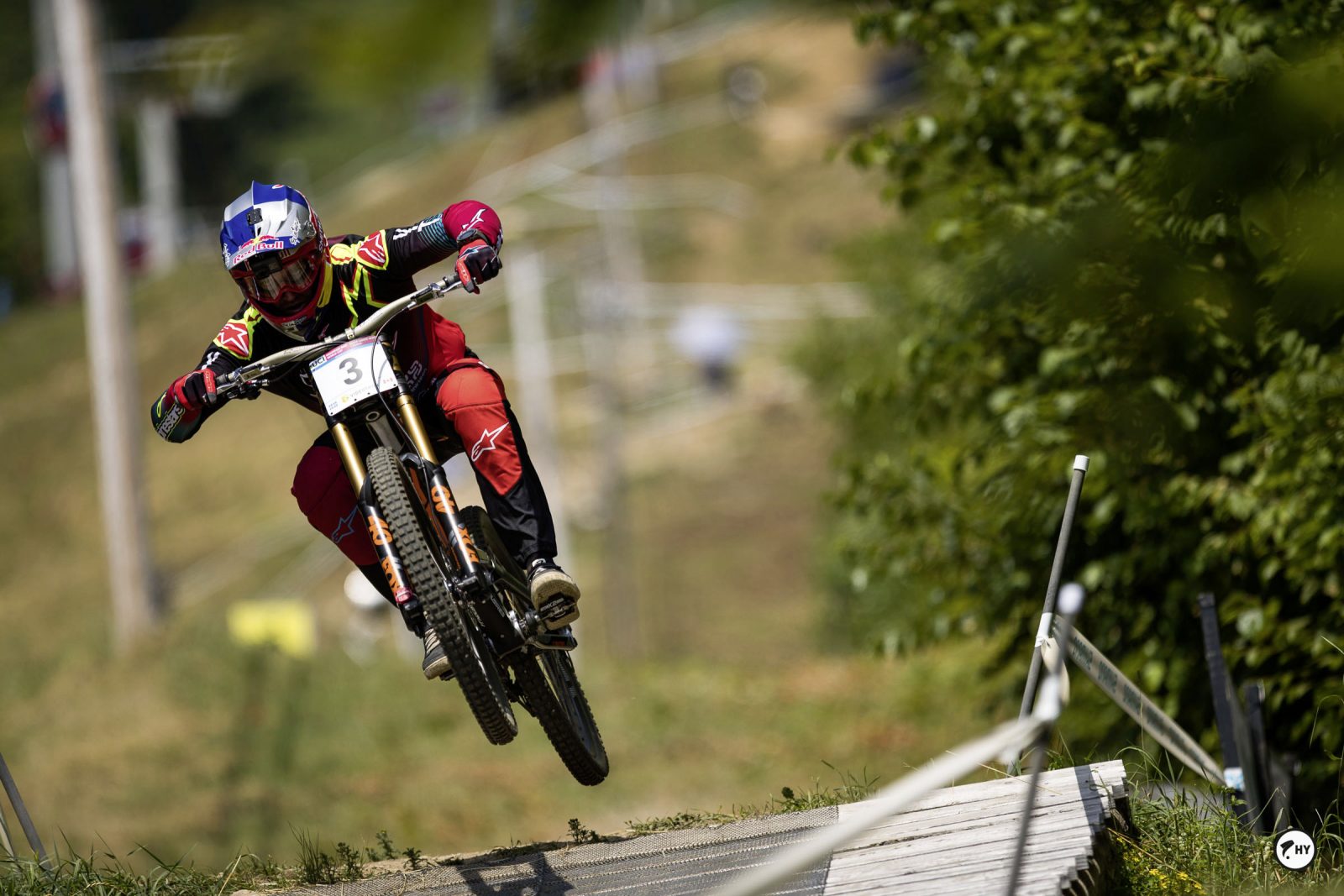 In the women’s, Nicole Myriam trumped Tracey Hannah also by just about 1.5 seconds with Rachel Atherton over 3 seconds back. Mont Sainte Anne is an extremely physical track so we’ll see if Rachel can fight back the shoulder pain and get another win under her belt. 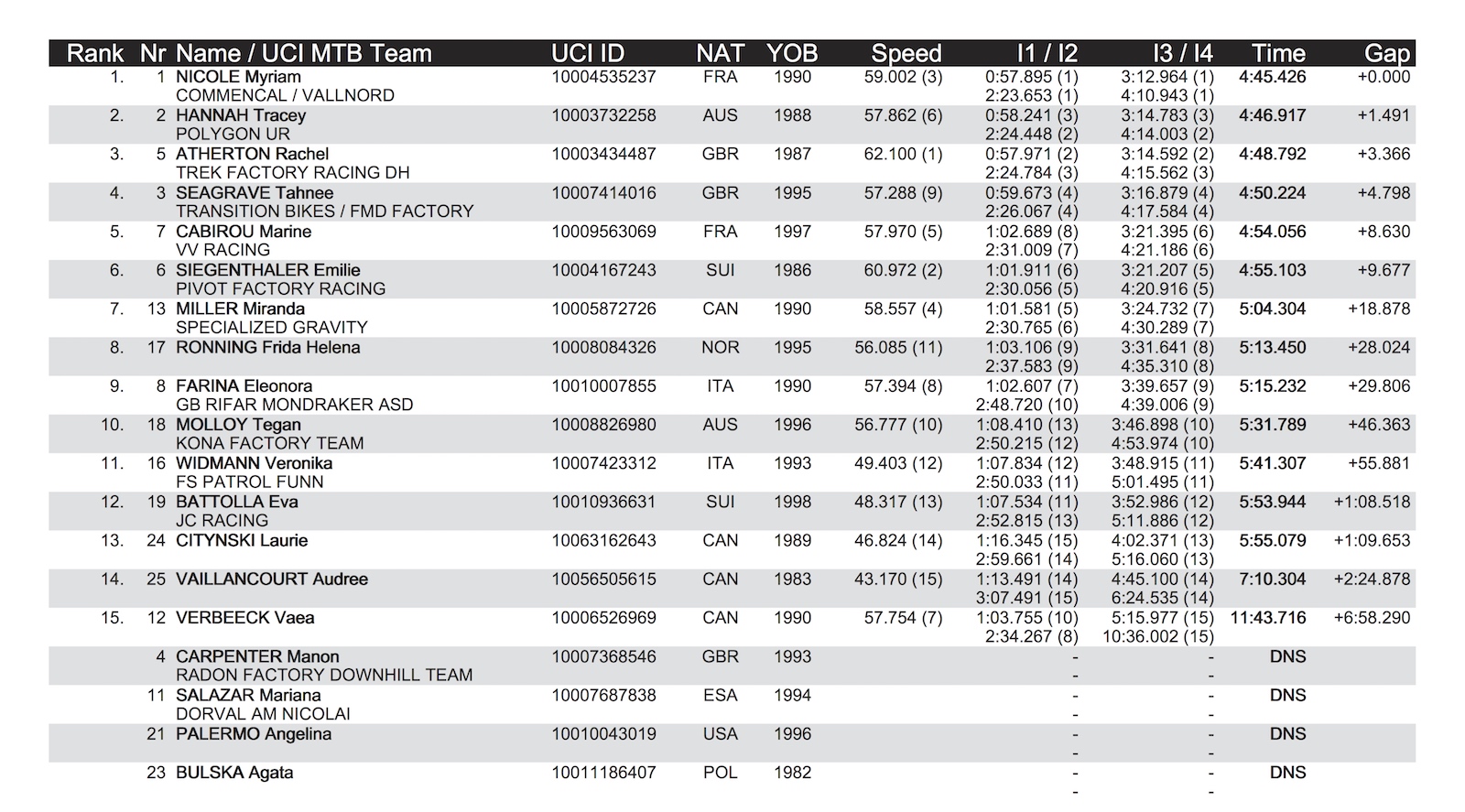 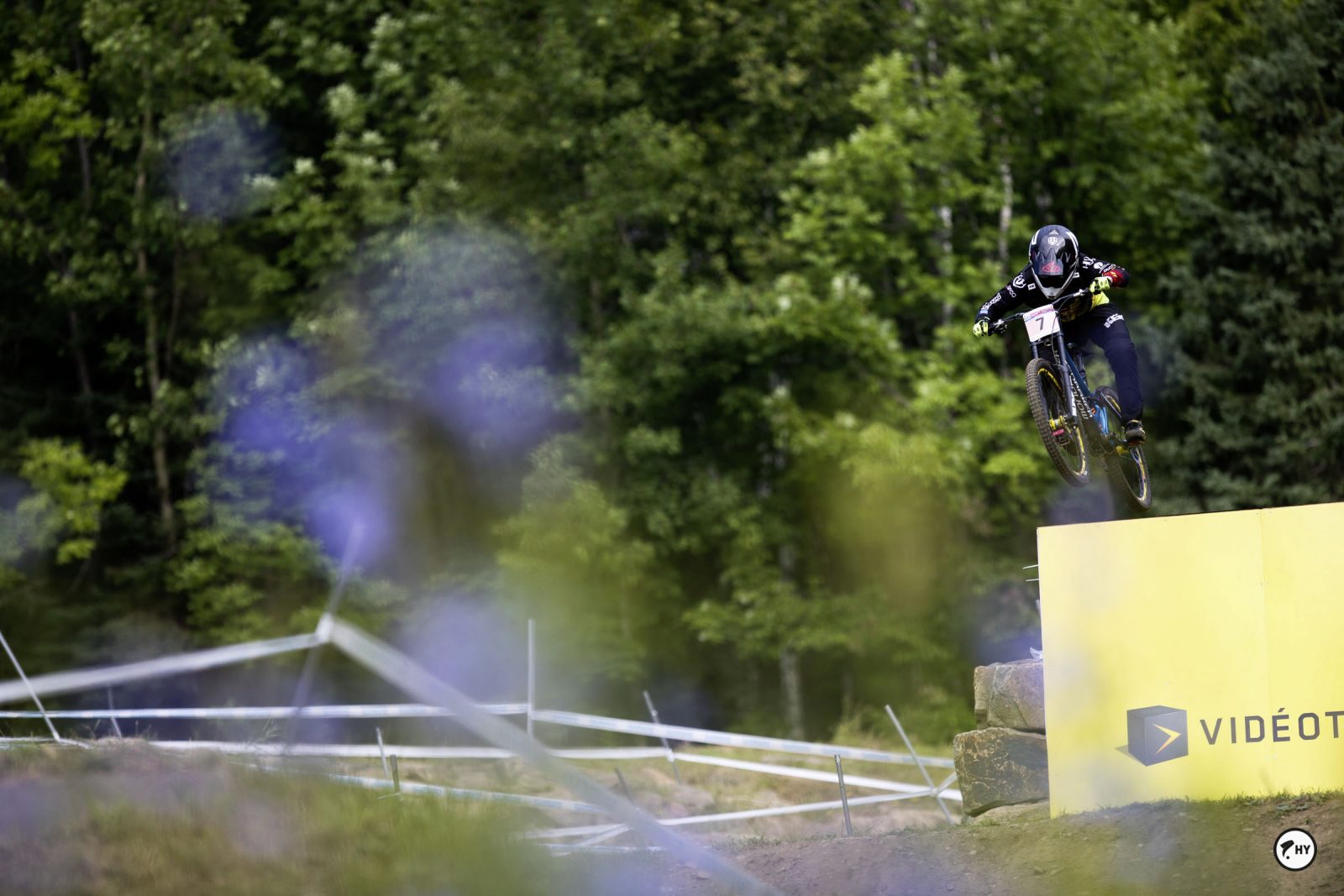 Marine Caribou took the fastest time in the timed training, but cruised into 5th today in qualifying. 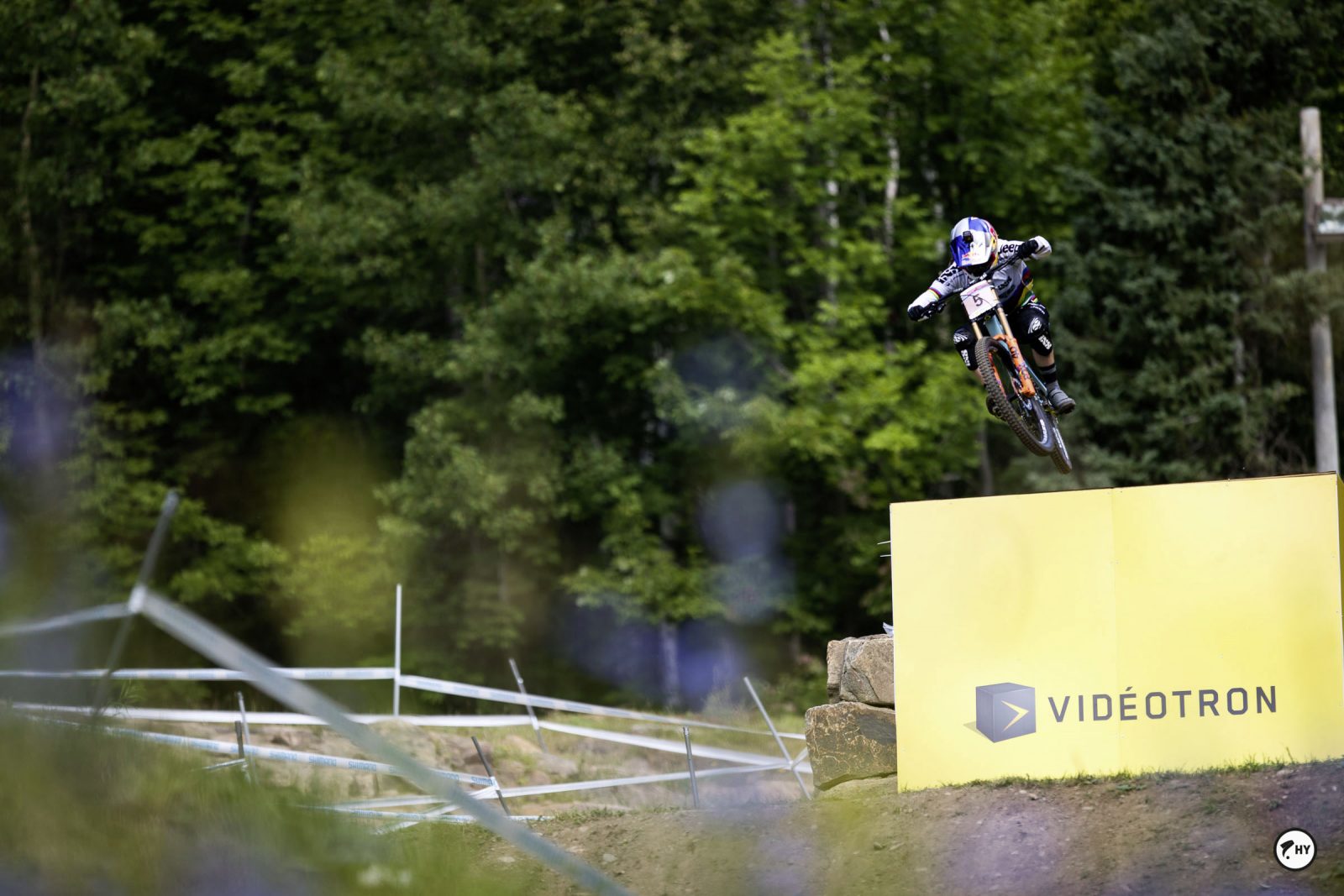 Rachel Atherton is still not 100% after a shoulder injury a couple of months ago.  On a couple of occasions on social media, she’s been lamenting just how brutal the track is on her shoulder…head games?? Since Rachel’s injury, Nicole Myriam’s consistently stepped it up and been a force lately. Finals will be exciting!

In men’s juniors, we’re assuming that Finn Iles must have crashed or flatted…It’s completely out of the ordinary this year for him to be back in 9th in qualies. More on that plus photos when they roll in from our shooters tonight…Stay tuned! 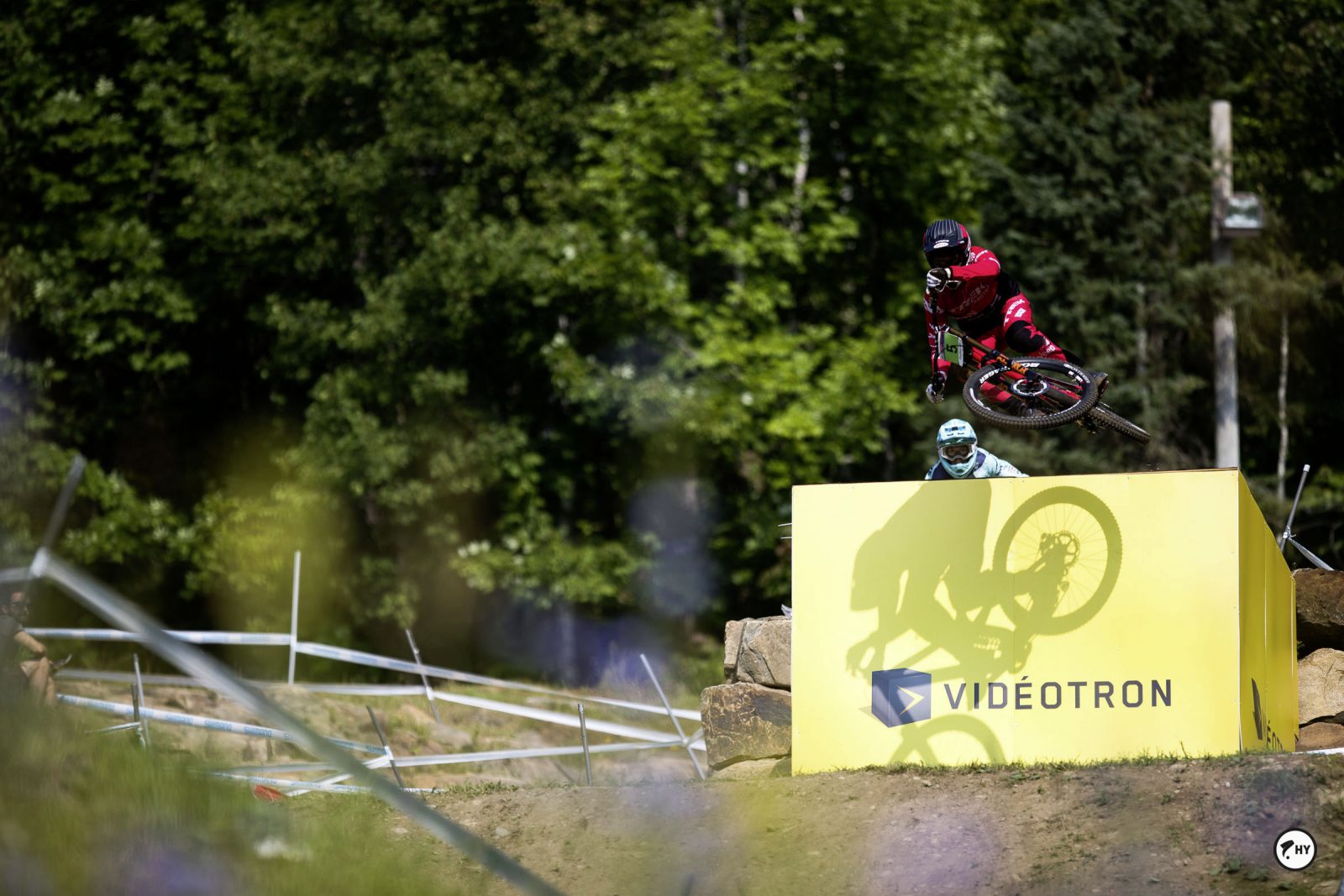 Kade Edwards is a FREAK! Nasty scrubs from this rising star. 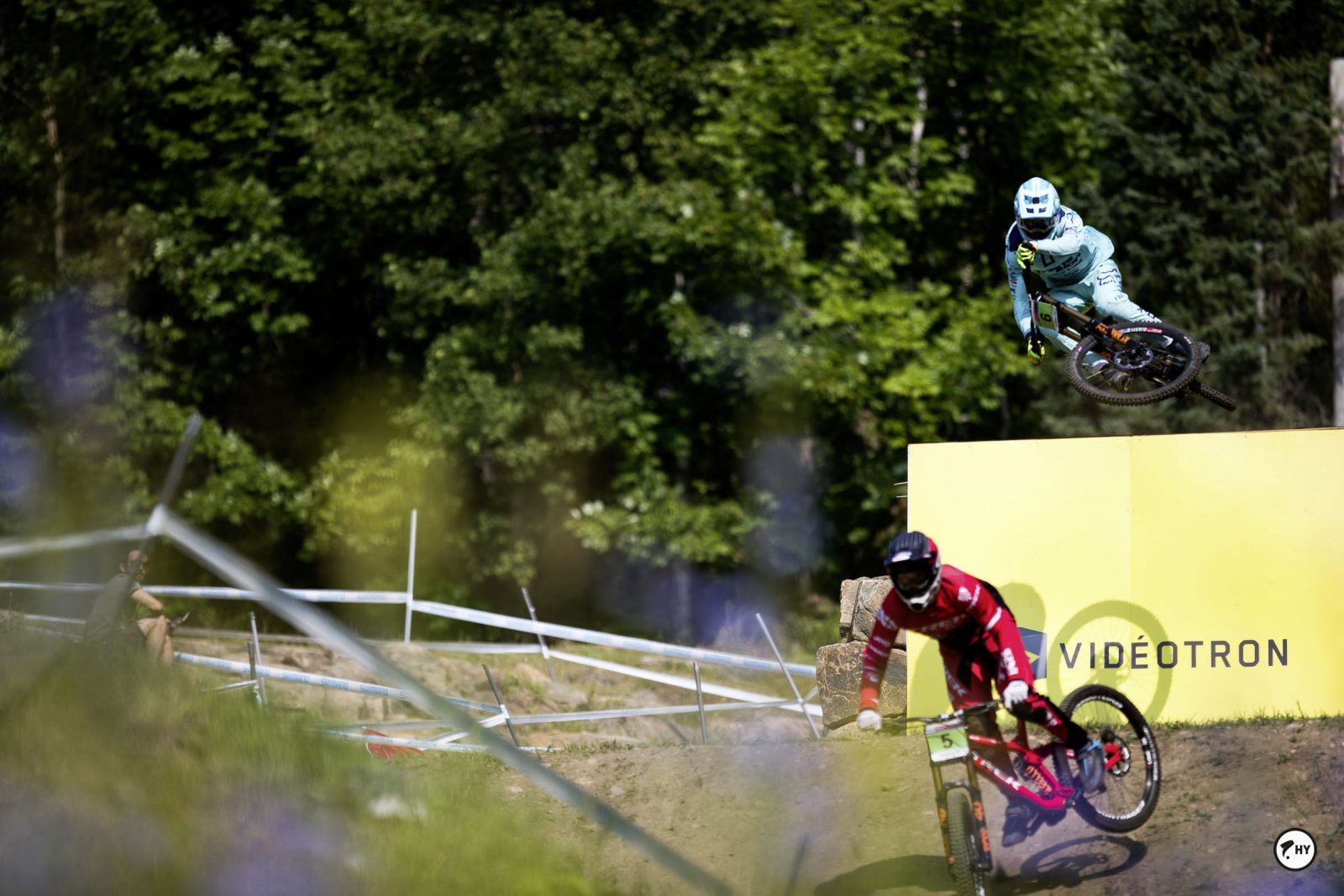 The same can be said for Kaos Seagrave…One thing’s for sure…the kids are alright. Matt Walker took the fastest time in Men’s Juniors by a freaking landslide…His time was up by 9 seconds on 2nd place and would have put him in the top 20 in elites…A front flat was confirmed by Finn; let’s see if he can rally and continue his winning streak