Another year, another exciting race in Val di Sole on the dry and dusty soil of the dreaded Black Snake track, between huge rocks and ominous roots. Amaury Pierron sealed his utter domination of the UCI DH World Cup 2018 season by also winning Val di Sole, his third World Cup victory in a row. The win is doubly impressive ast VDS is easily the most feared and brutally challenging race on the circuit, of which he is now the undisputed leader in the overall standings. 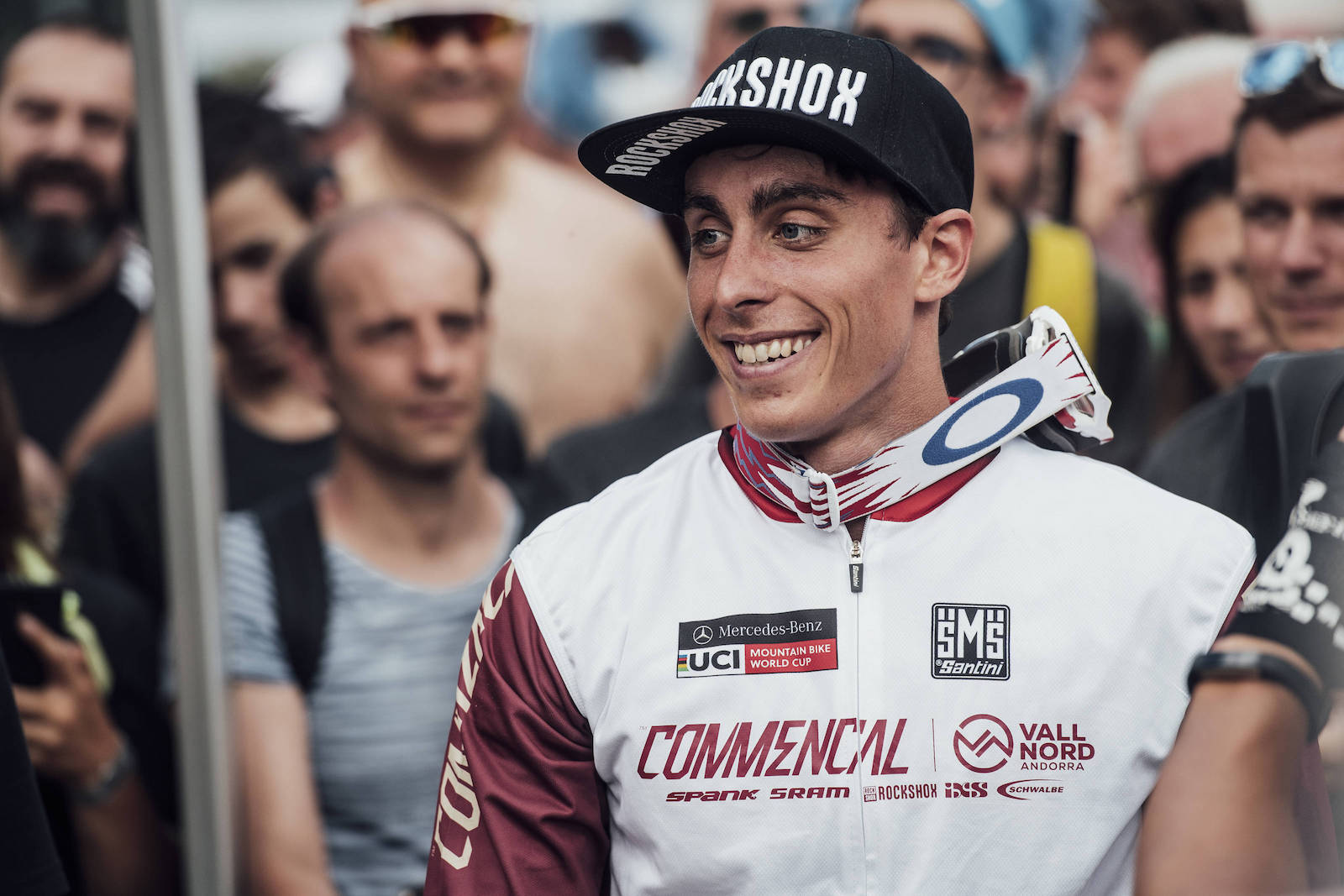 Pierron shows his total confidence, but his win may have come from the fact that he took a completely different line choice from the rest of the competitors, while staying fluid and fast. This is proving to be very effective strategy at every race. Second position went to Laurie Greenland, who had an excellent run, full of adrenaline and energy, practically perfect. Only half a second separated him from Pierron’s time and thanks to this result he climbs from the fifth to the second place in the overall standings. Danny Hart landed in third position with a slightly conservative race run (for his style), but clearly he was blazing fast as he was just over a tenth of a second from his former team mate Greenland. Danny also went up in the overall, to fifth place.

Fourth place went to Luca Shaw, the only one of the Syndicate team on track,  due to the injury of Minnaar and a fall at the beginning of the track for Vergier. Thomas Estaque, after a long hot seat streak that marked the time to beat, gave a hard time to several top riders, eventually ending with a brilliant fifth place finish. 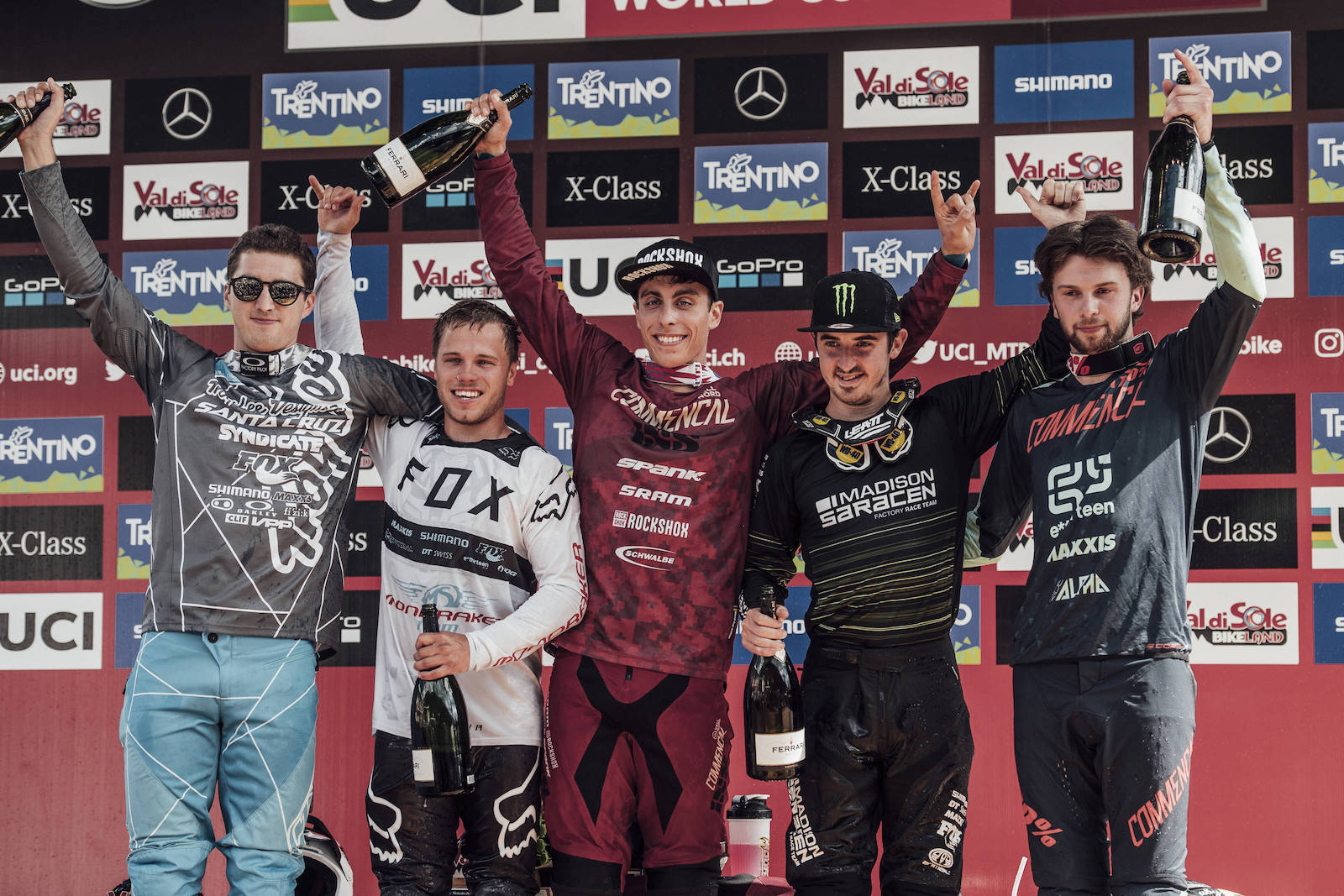 Bruni crashed unfortunately, while Gwin raced despite the thumb injury, obviously without expectations of results. 2nd place qualifier Finn Iles would eventually end up in 8th with a great results, especially for his first year in elites. 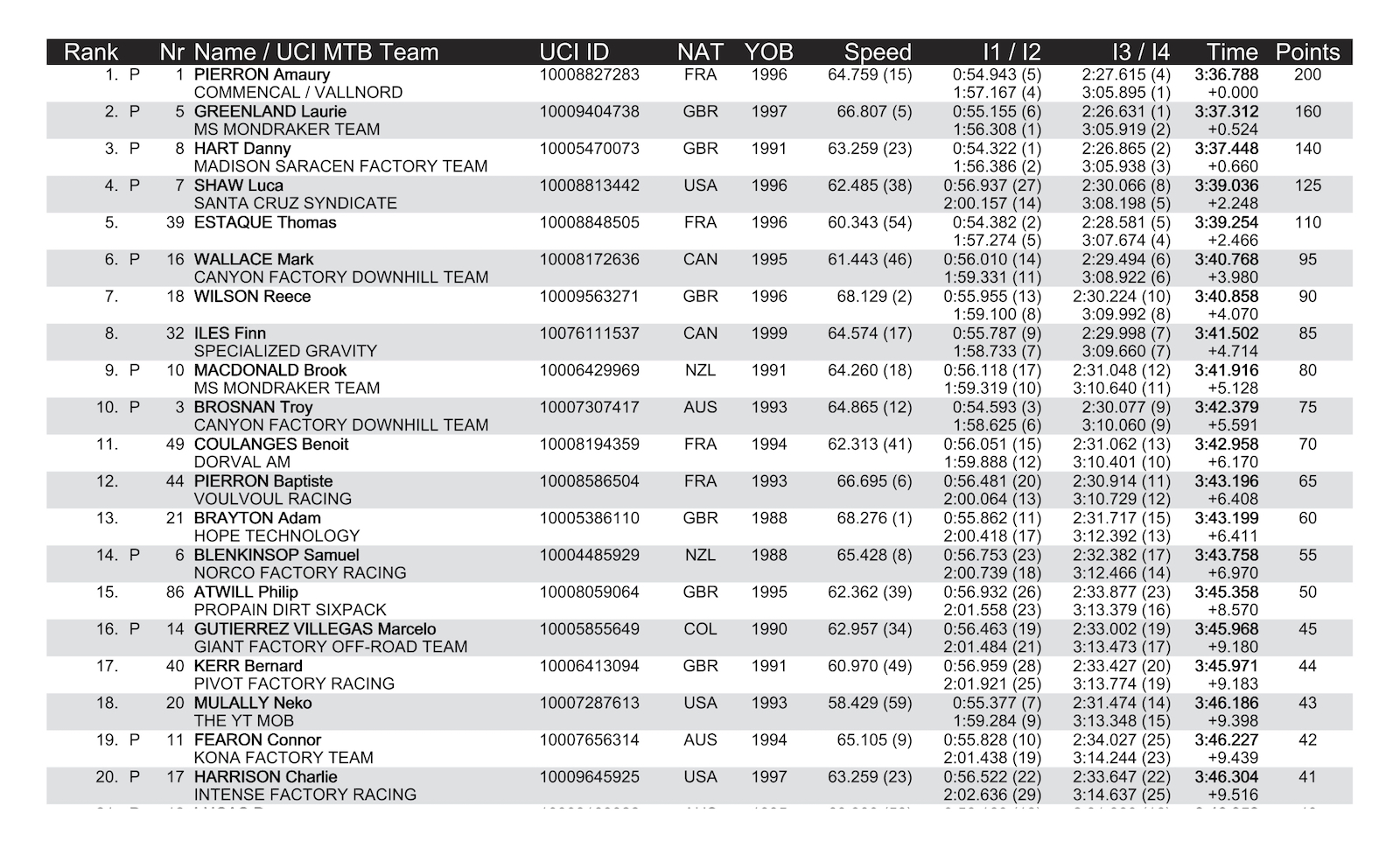 It was an exciting race also in the women’s category where Tahnée Seagrave held on to a consistent and controlled run that allowed her not to make mistakes and to push along the whole development of Black Snake. 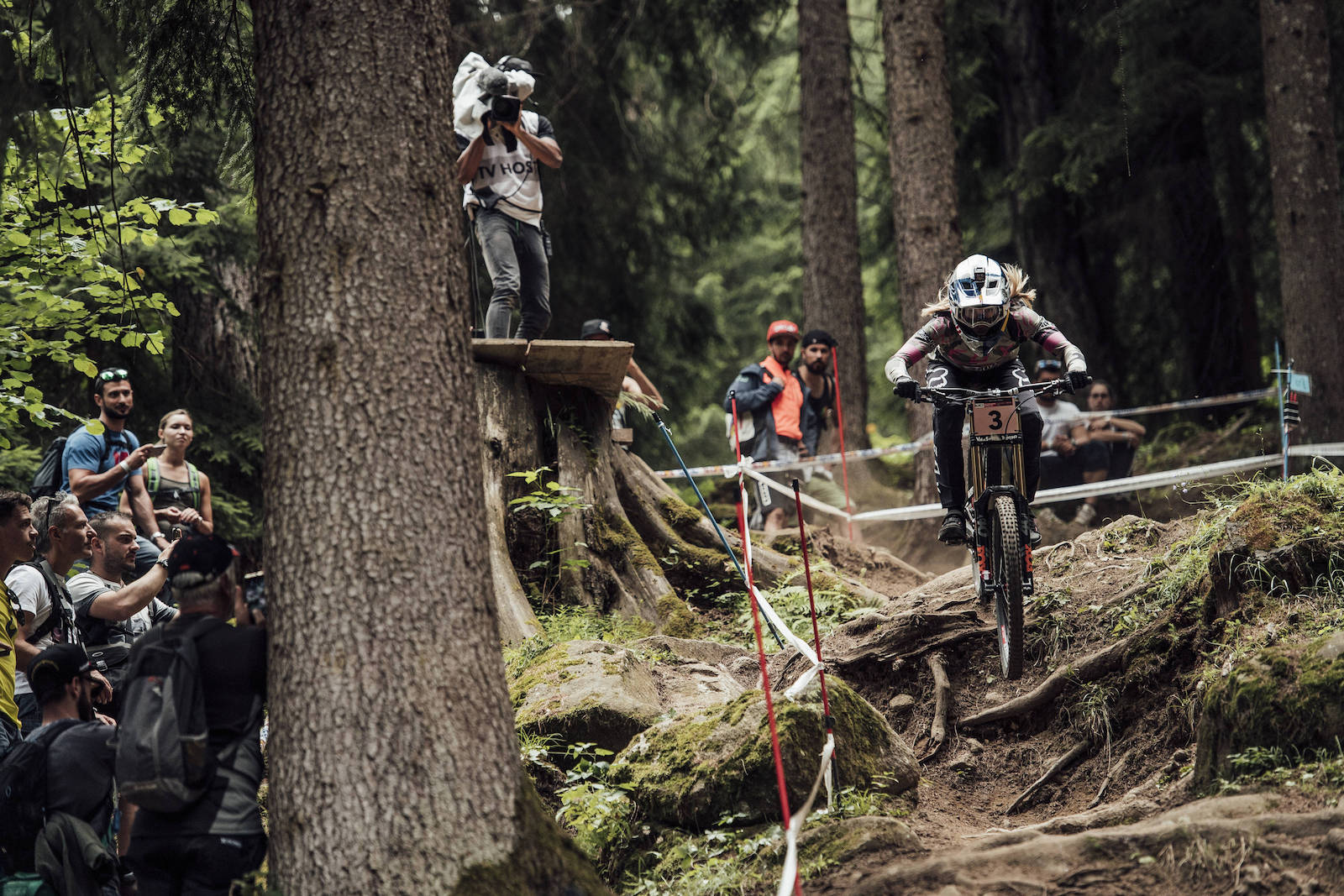 Rachel Atherton led out one of the best runs in the women’s category, but suffered from exhaustion in the final stretch, missing out on first place and finishing second.

Rachel and Tahnée both overtook Myriam Nicole in the points race, after PomPon was taken to a hospital in Trento because of a back injury she sustained during yesterday’s practice, which fortunately is less serious than initially thought, but still prevented her from racing. An ever faster Monika Hrastnik conquered the third spot on the podium, confirming her excellent form with which yesterday she won the qualifying heat. Fourth position for Tracey Hannah and an excellent performance by Veronika Widmann who finished in fifth position after a long hot seat. 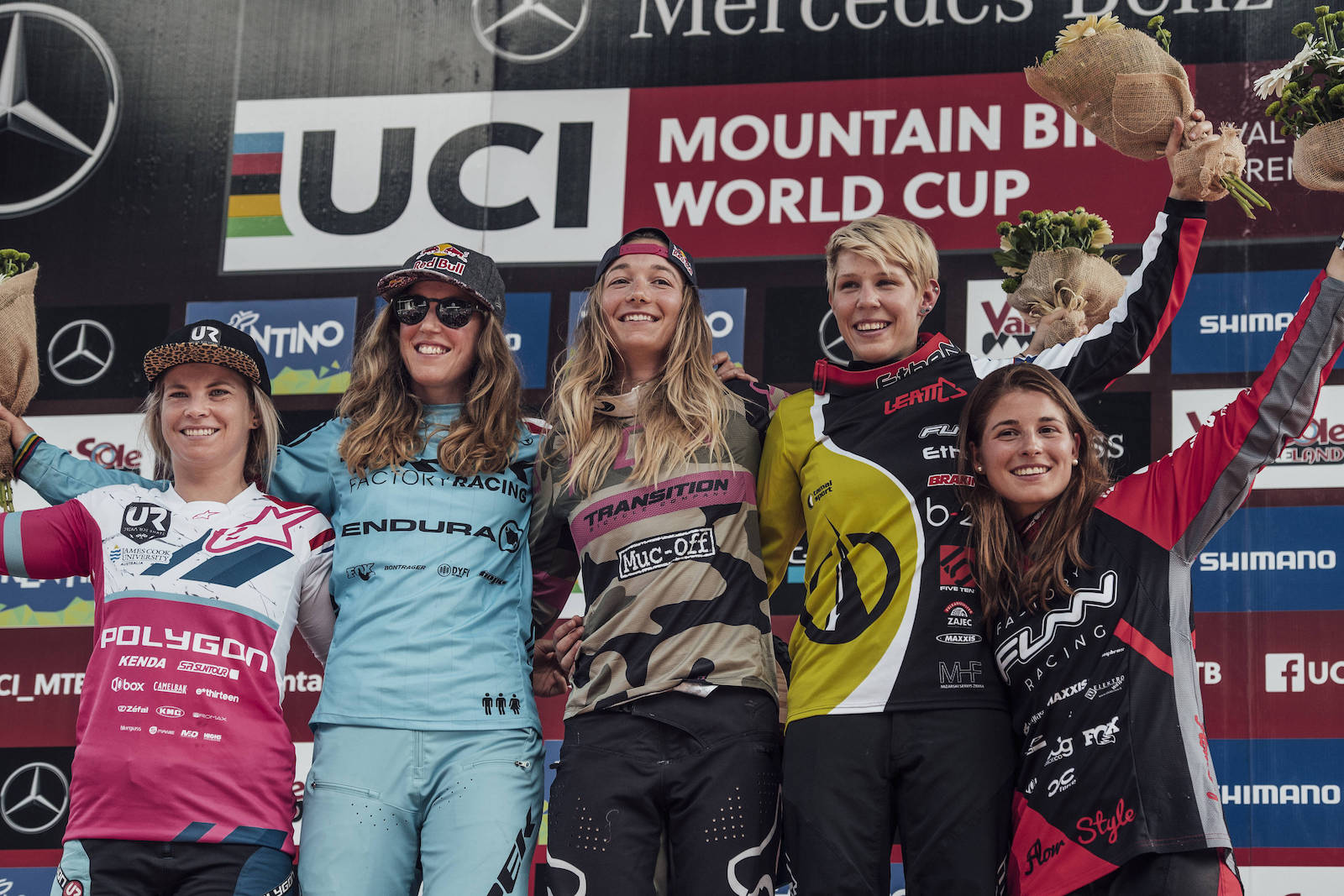 Thibaut Daprela continues to show consistency and took first place in the Junior Men category, scoring an overtaking the circuit leader Kye A’Herne who yesterday did not qualify for the final due to a fall. Second place for Henry Kerr, followed by Patrick Butler. Whatever the conditions or difficulties of the track, the young promising Valentina Höll literally dominates the Junior Women category as if she were racing in a category of her own. Over 17 seconds ahead of the first of her pursuers, or rather, the first of the “non-Höll”, the American Anna Newkirk took second, puttin her in third place in the overall standings.