On a beautiful sunny day, the UCI DH World Championships in Lenzerheide took place on a fast, technical and very interesting track that has tested the athletes both technically and physically.

Loic Bruni put down a flawlessly calculated run, thus winning the third DH World Championship title of his career in the Elite category, which he dedicated to team mate Jared Graves. In doing so, the Frenchman reconfirms his world title earned last year in Cairns.

Bruni, was the only one to beat the time of Martin Maes, who took the silver medal by just 2 tenths of a second from the World Champion after a long hot seat, demonstrating his mindblowing interdisciplinary talent.

Danny Hart had a great run, but it wasn’t enough to beat the Belgian. Less than a tenth of a second behind Maes put him in 3rd place. Loris Vergier closed it out in fourth position paying for a small but significant mistake that cost him precious time while he was leading in the first split.

Fifth place for Aaron Gwin who just cannot manage to crown his world champs dream. He too paid the price of a mistake that made him lose more time even though he was not in the lead at the beginning of his run.

Both Brook MacDonald, who was first in qualifying, and Amaury Pierron, winner of the 2018 World Cup overall would succumb to crashes that dashed their chances of top honors.

Rachel Atherton wins her fifth World Championship title at Lenzerheide. It was a very well deserved victory for the British champion who stomped out her opponents by 10 seconds with an aggressive, clean and simply perfect run.

With an aggressive run, despite some uncertainty, however, on the second half of the track, Myriam Nicole put down a fluid, fast and steady run that earned her the bronze medal, less than 7 tenths behind Seagraves.

Fourth place for Marine Cabirou, followed by only 3 thousandths of a second by Tracey Hannah.

Young British racer Kade Edwards, the protégé of the Trek Factory Racing team finished the World Cup overall in third position. Today he lit it up with the fastest time in the men’s Junior category, winning the gold medal and the top step. Australian Kye A’Herne was behind him at almost 4 and a half seconds back, while the third step of the podium was occupied by the Canadian Elliot Jameson. Thibaut Daprela, winner of the UCI DH World Cup 2018 season and favorite for this world title, couldn’t manage better than fourth place. Fifth place went to Henry Kerr, only 4 thousandths of a second away from Daprela.

As expected, in the Junior Women’s category Valentina Höll donned her first world championship jersey, which we can bet will kick off a long series of world titles. The young Austrian athlete has distinguished herself since her first World Cup race as a champion, gaining more and more awareness of her talent and bringing a breath of fresh air into the women’s racing scene. The Elites better be scared about next year…Congratulations Vali! 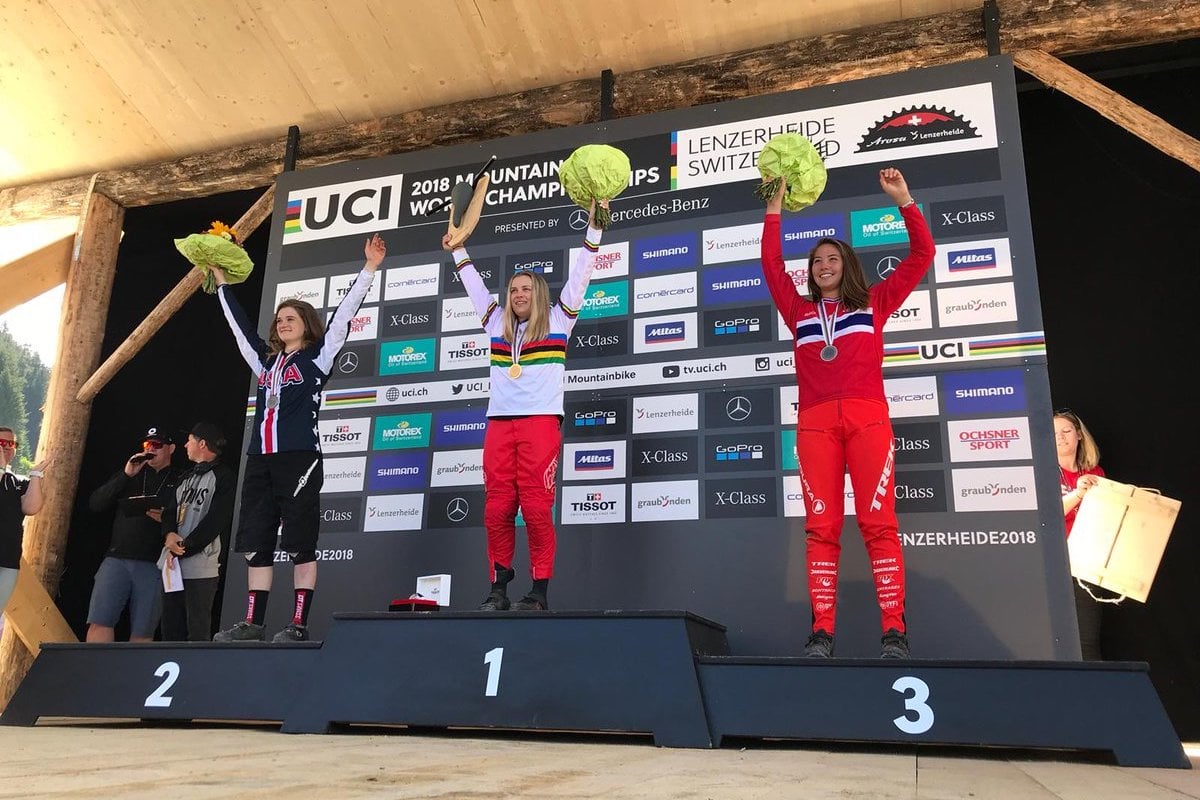 American Anna Newkirk had a good run attempting to close the gap from the new World Champion, landing just over 10 seconds back. Third position for the Norwegian Mille Johnset, followed by Nastasia Gimenez and Paula Zibasa.