On a track that has progressively dried out from its former, slimy muddy state, the triumphant return of Schurter has taken place in Albstadt. 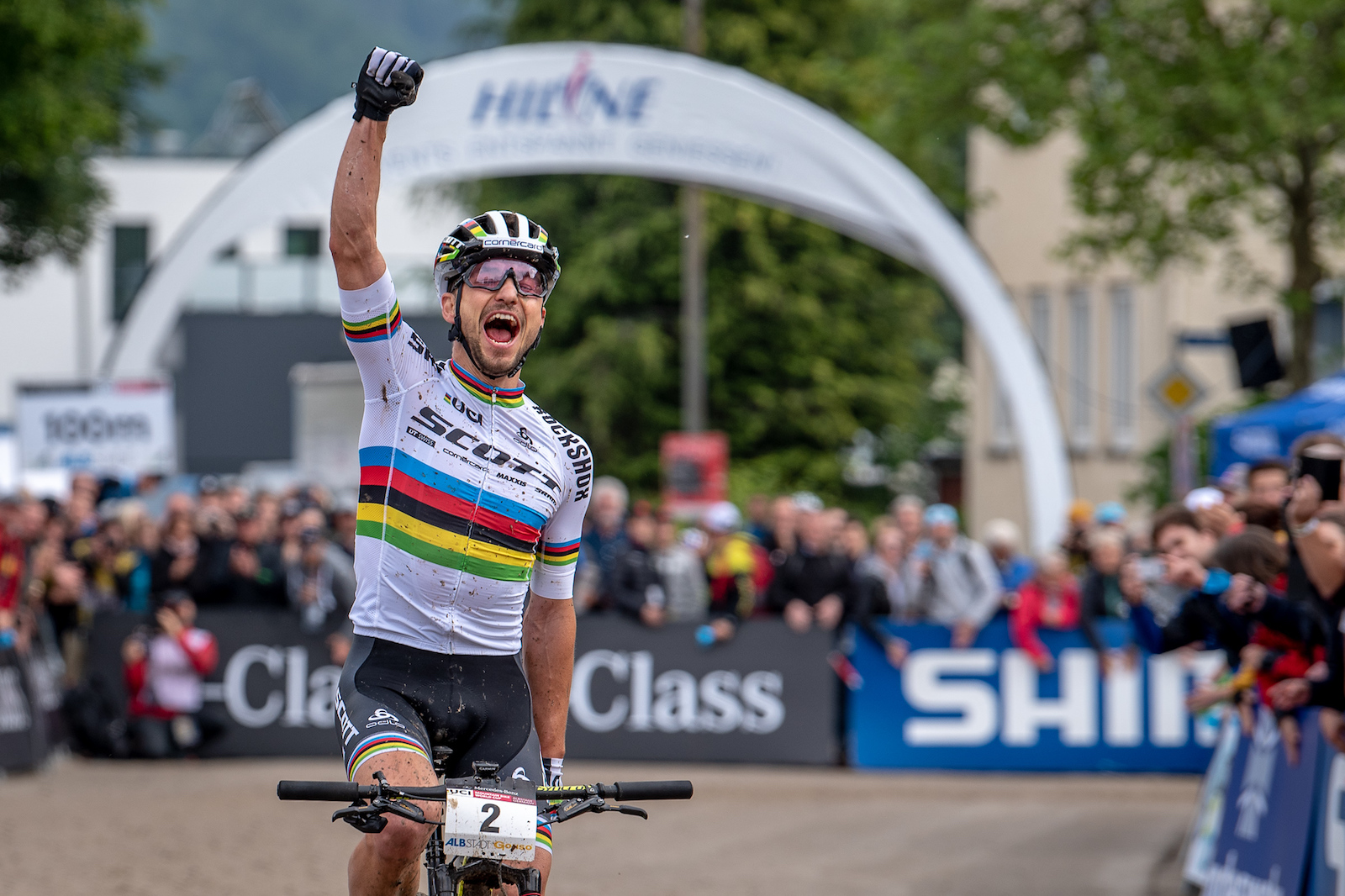 The World Champion, after a lackluster short track that relegated him to third place at the start, today in the race he recovered positions immediately slipping into the leading group together with Marotte, Van der Poel and Flückiger. 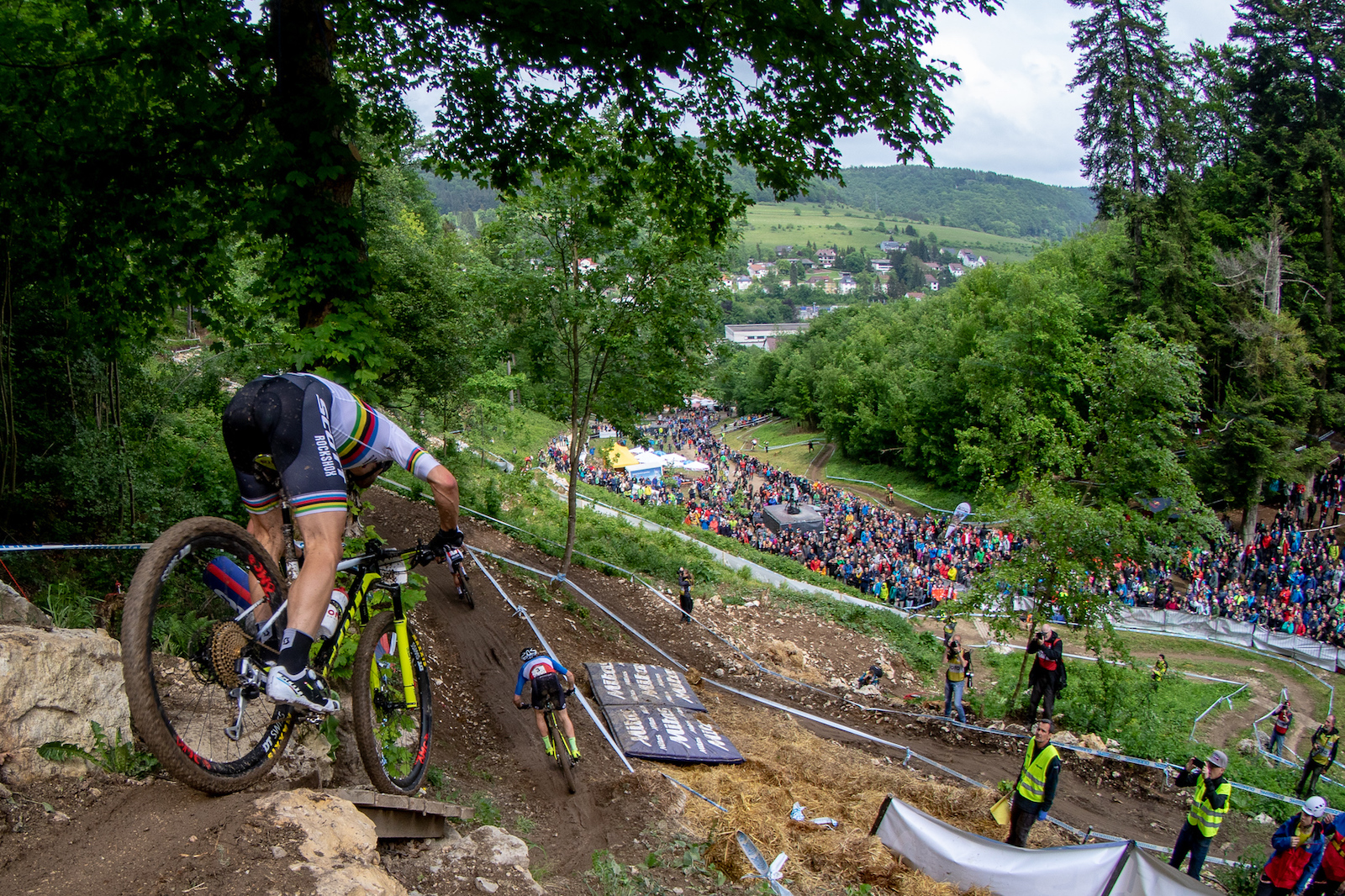 Mathias Flückiger during the second lap due to a puncture and almost flat tire sprinted to the technical area, scoring the second best lap of the race, where he changed the tire in 35 seconds returning to the race losing only 28 seconds on the lap . He finished in 6th place doing his best to recover the effort on the sprint lap, gaining some position to hunt for the podium. 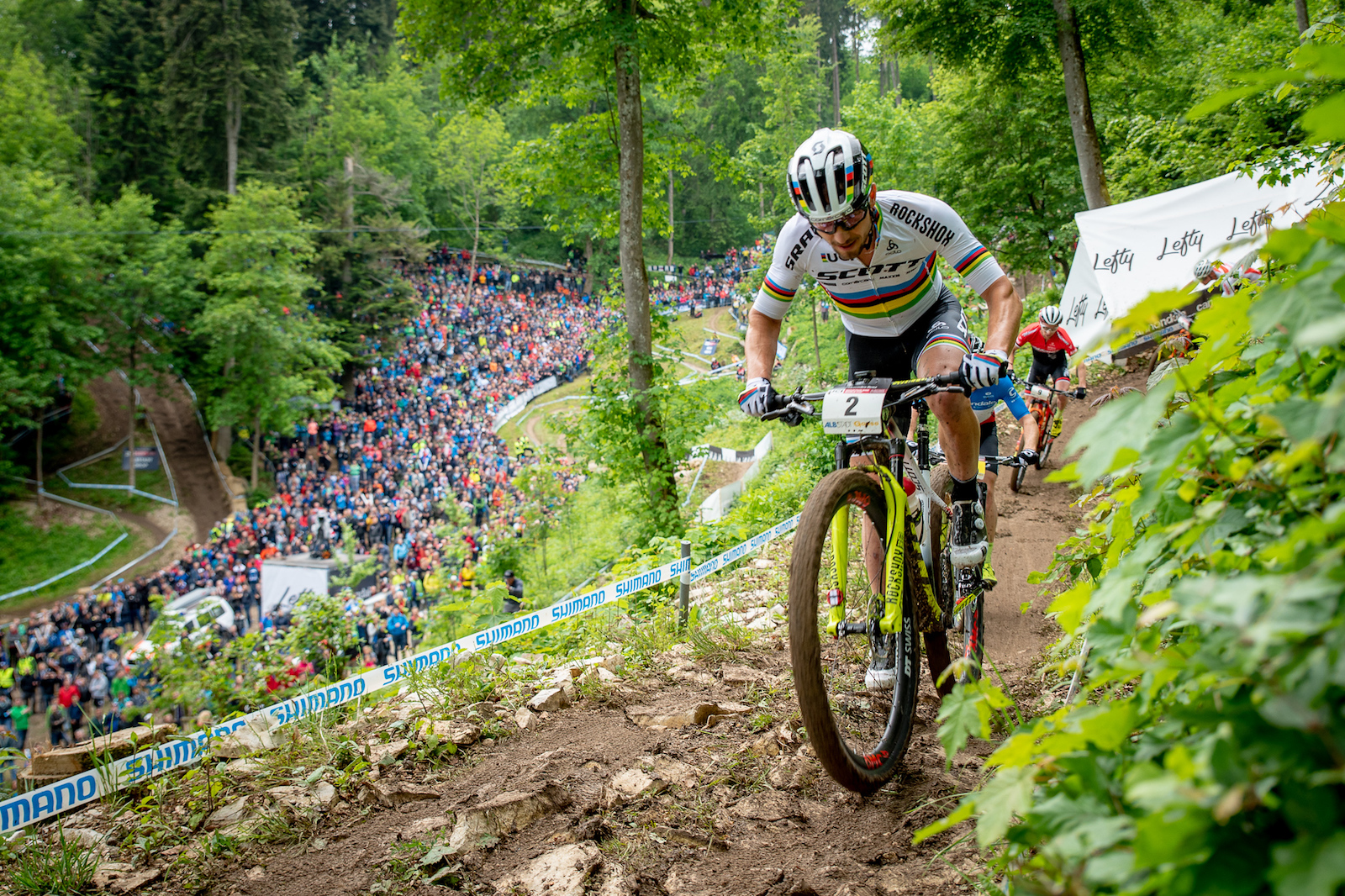 In the fourth lap Schurter got his first big increase in pace by dropping Marotte and Van der Poel to get away, followed by Stephane Tempier who attacked his wheel until the last lap, when Nino took off on his own, thanks to a further increase in uphill pace and greater downhill speed where the telescopic seat post played its part. Tempier concluded with an excellent second place. 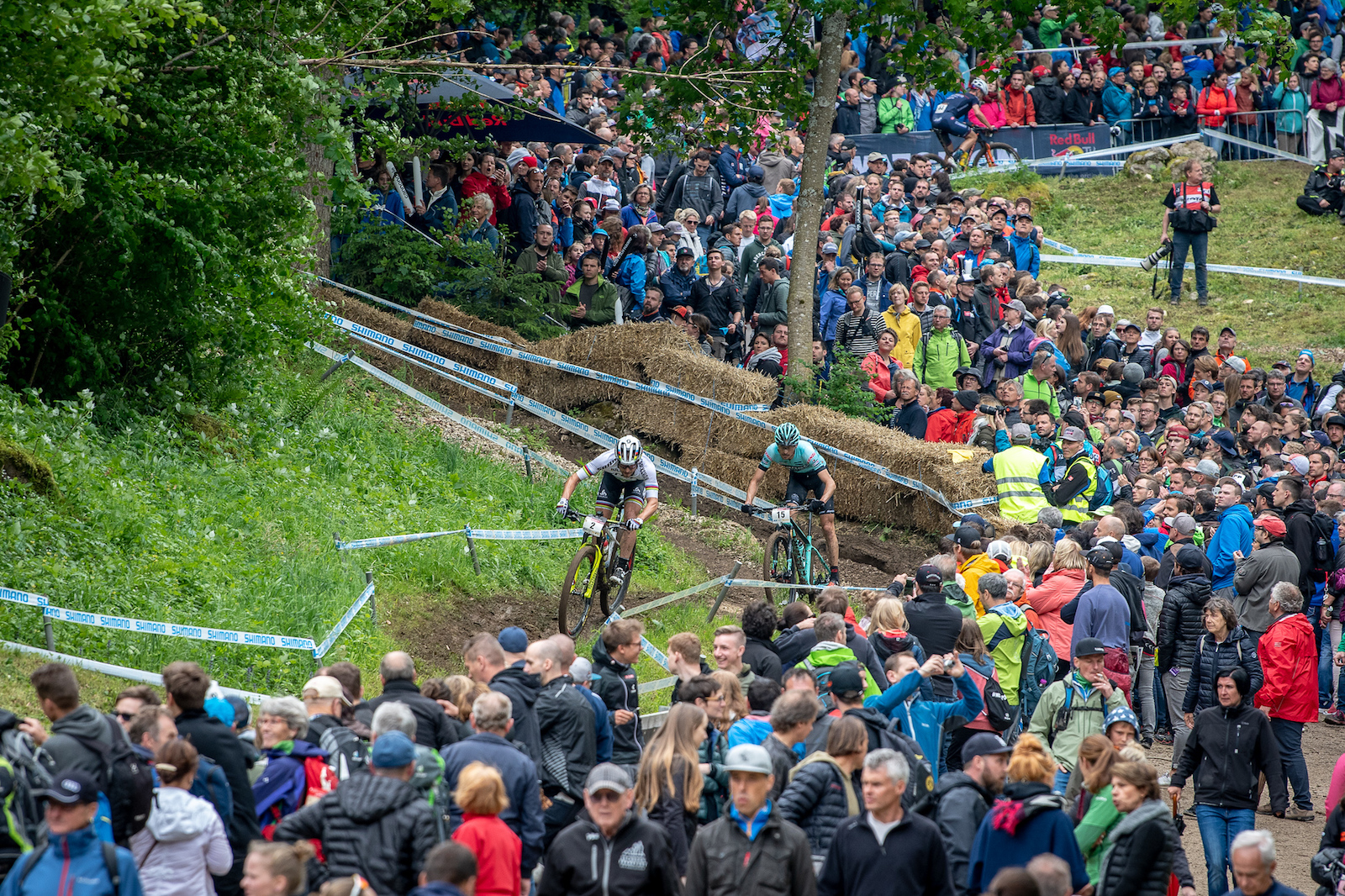 Van der Poel, despite a broken scaphoid that will be operated tomorrow, has engaged and won a close fight with Maxime Marotte for the third position. 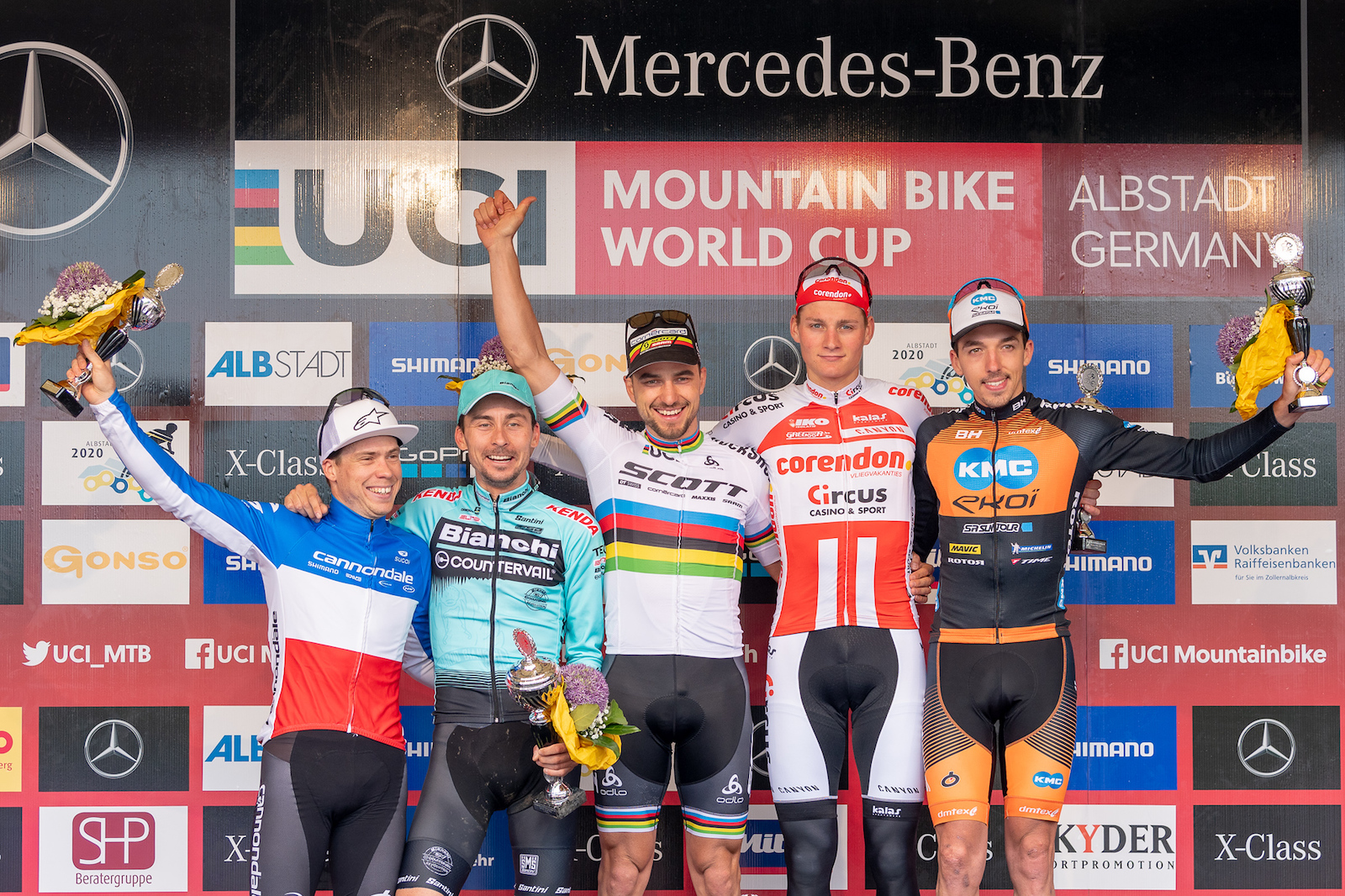 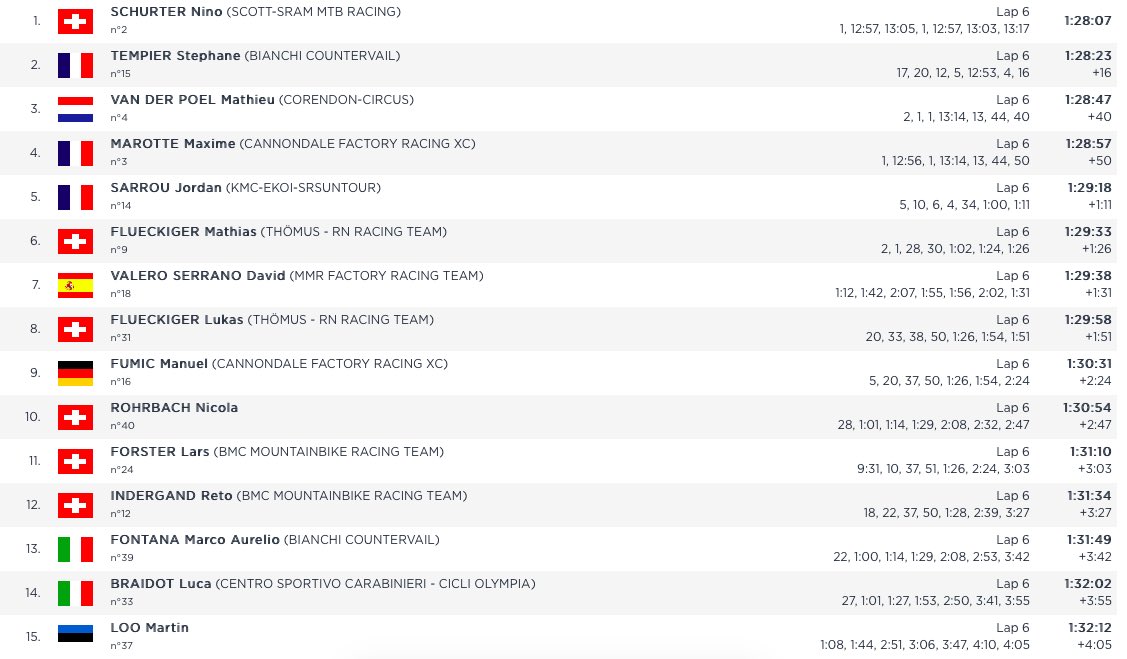 In the women’s field, on still very wet ground, we saw Jolanda Neff’s absolute dominance, particularly at ease in the mud. 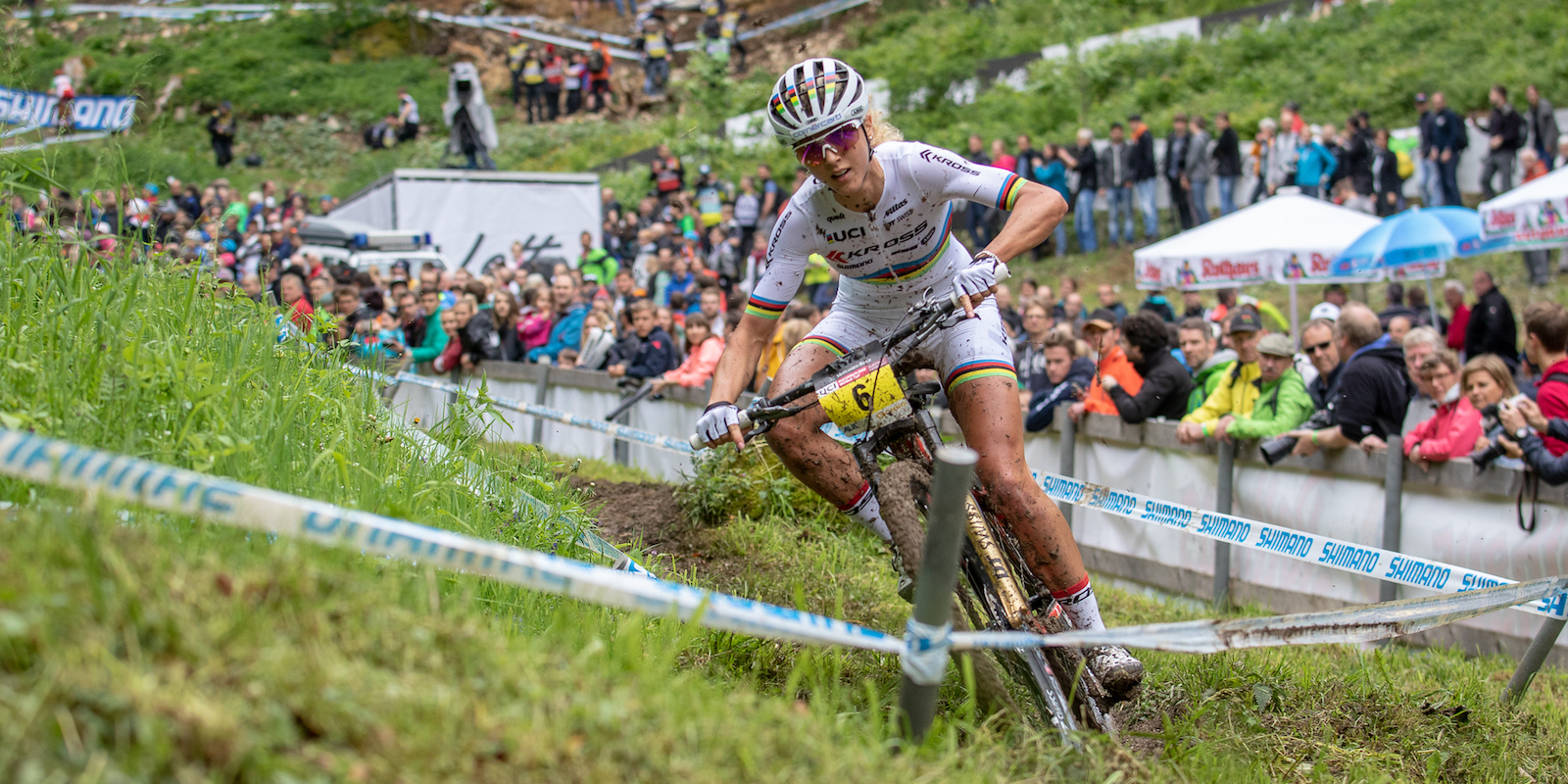 The Swiss set the pace starting from the first lap during which she was positioned at the head of the group and then progressively gained on all the others, competing amongst themselves, without any sign of failure, winning by 2 minutes and 16 seconds. 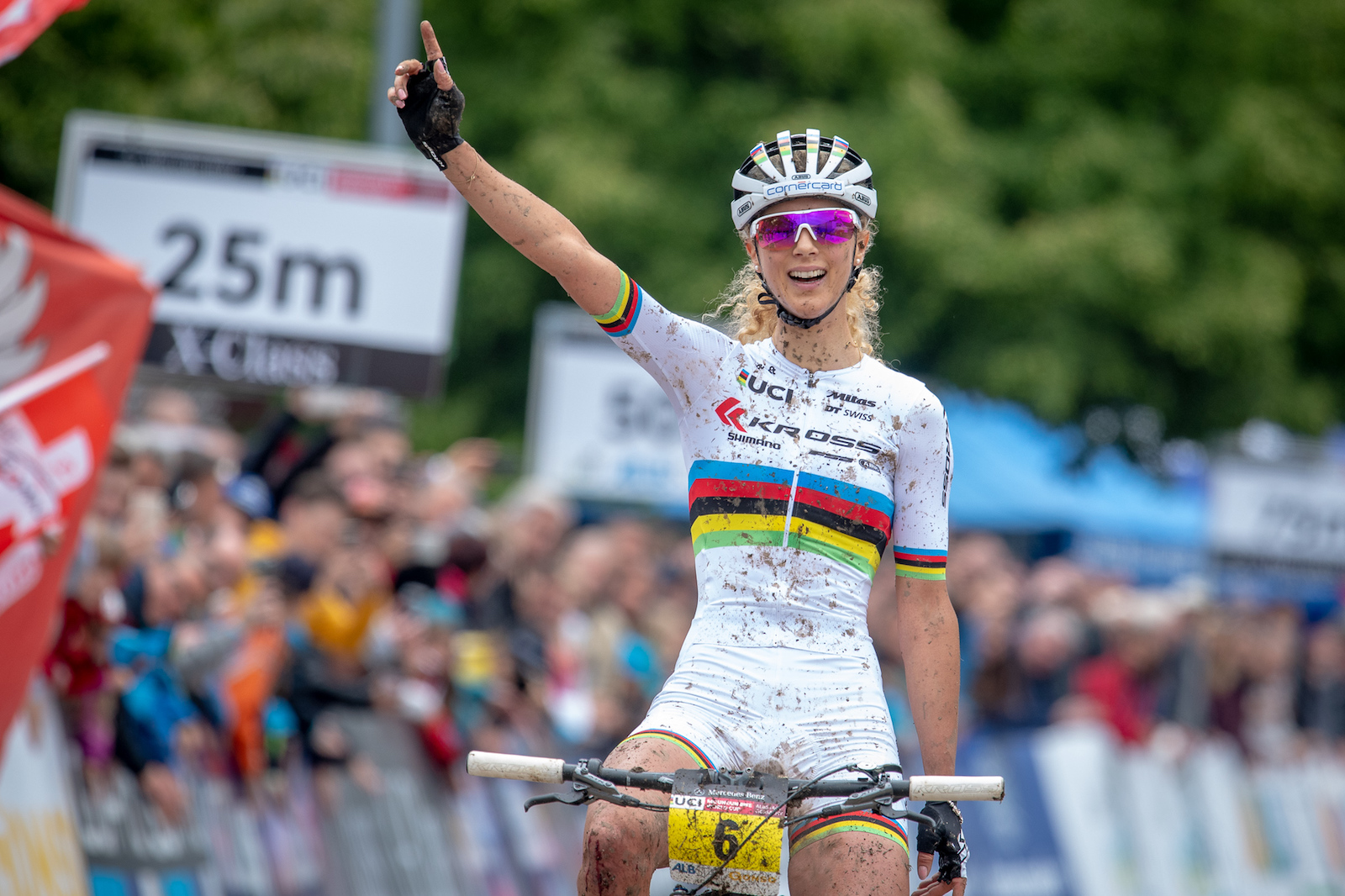 Second position went to Yana Belomoina who kept a steady pace behind the other podium positions, and then shot up during the last lap, closing the gap on Alessandra Keller, who long retained the second place despite two ruinous crashes in the most technical downhill section of the track and despite appearing to have good form. 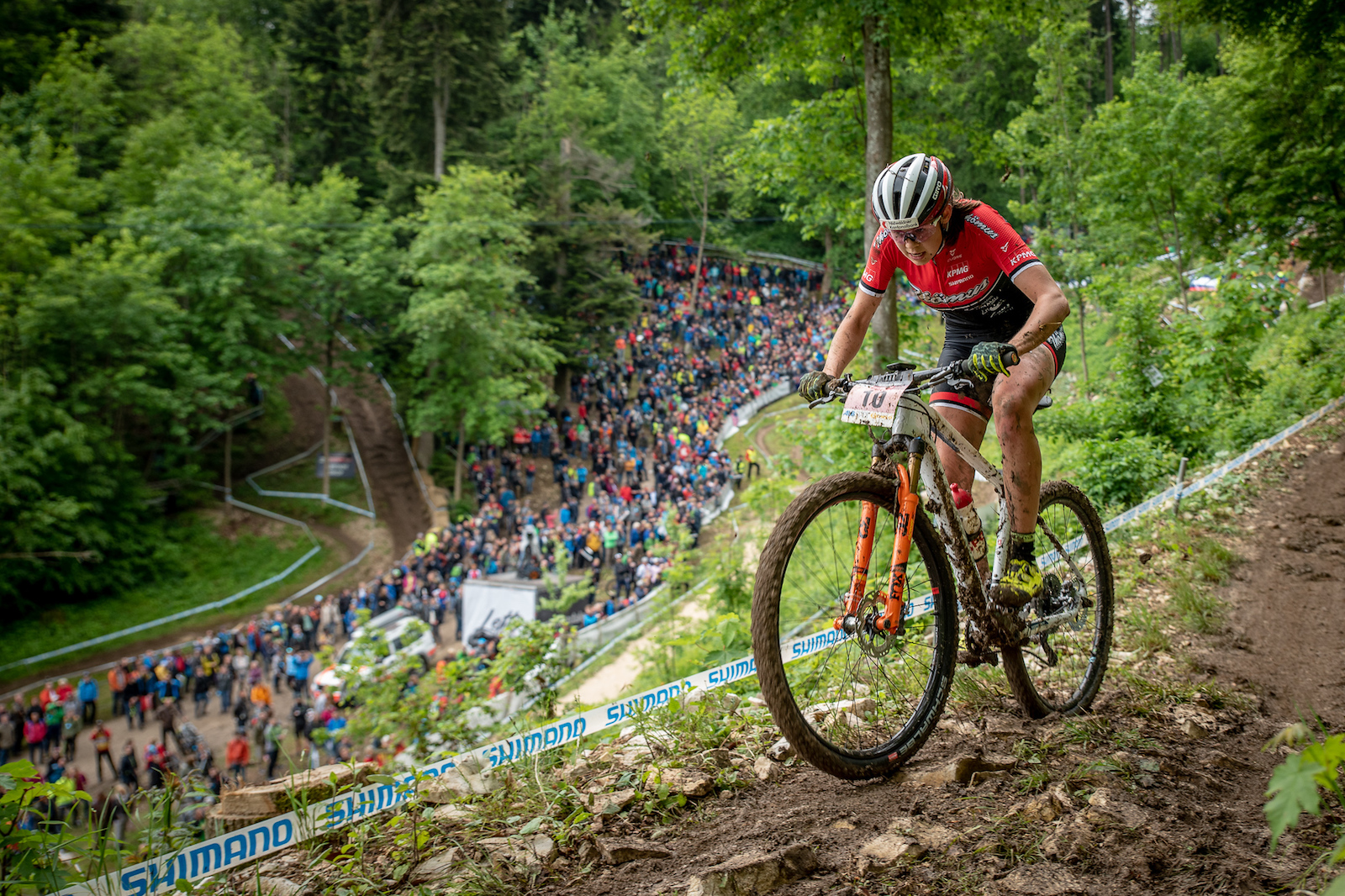 Finally, Keller ended up in fourth place, surpassed by Dutch racer Anne Tauber, who followed Belomoina for part of her sprint, slowing down later, but still managed to recover the third position just before the finish line. 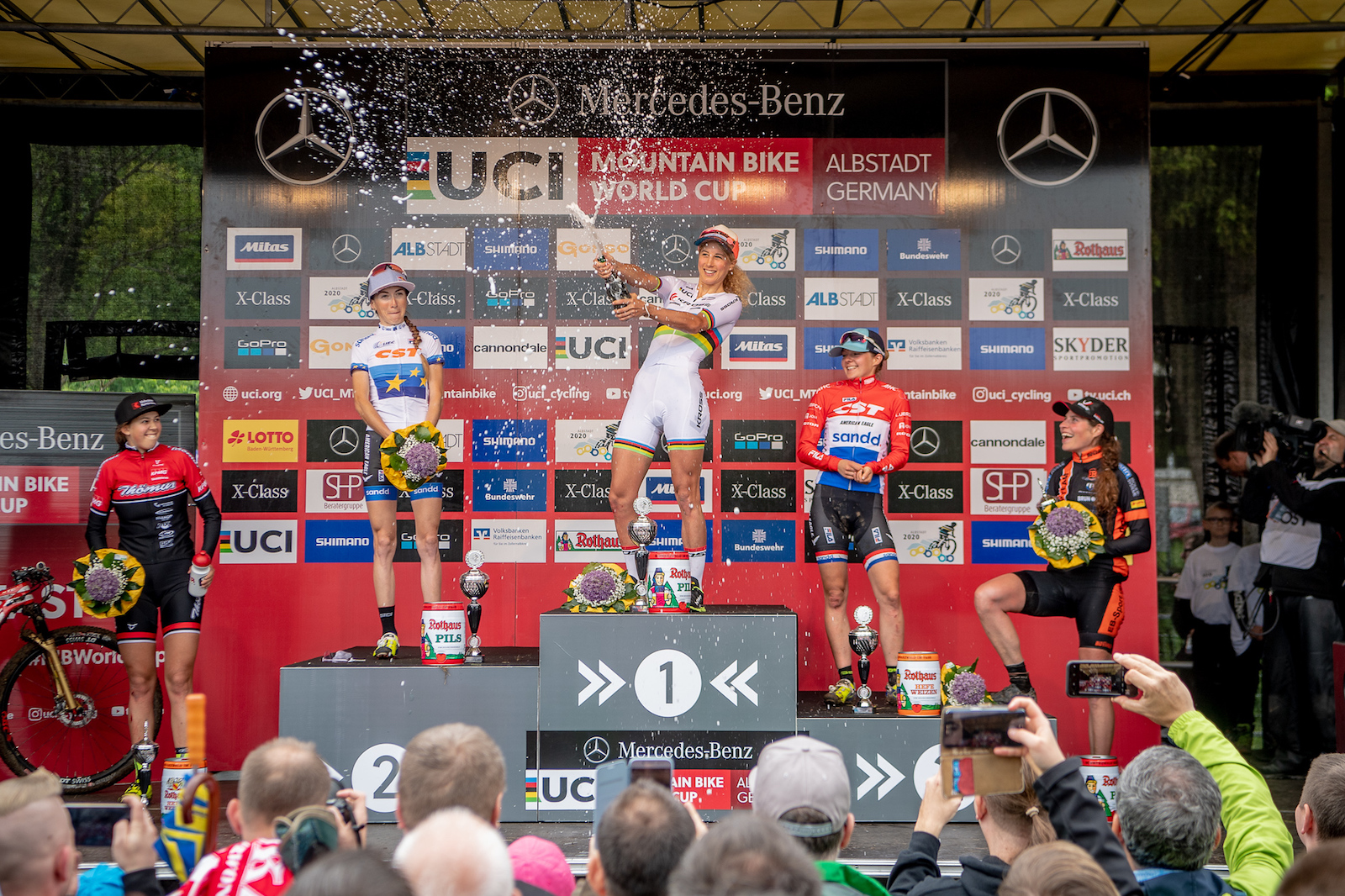 In tenth Katy Courtney progressively showed signs that she keeps working her way up to being a force to be reckoned with. Annika Langvad, who scored the fastest time yesterday in the Short Track, started today in first position, but finished in 29th place. 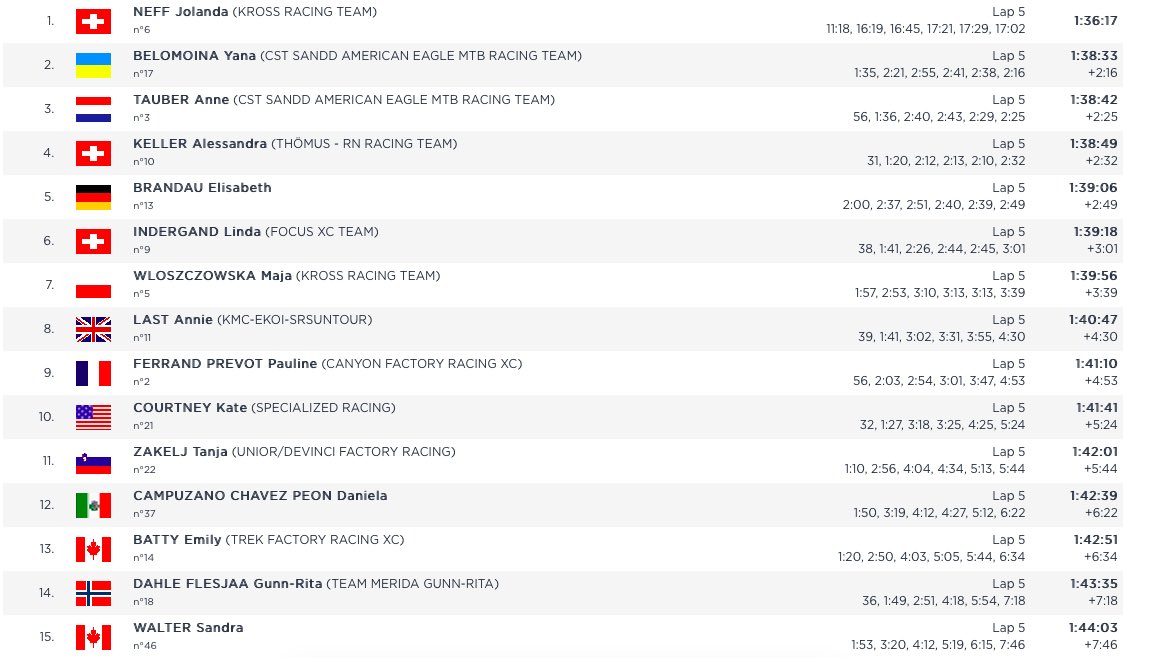