[ad3]
A few weeks back, Specialized invited us to ride e-bikes…errr – “pedal assist bikes” in one of the few places on earth that has banned them from singletrack designated for mountain bikes. Our initial thought was : “What the hell are they thinking?” 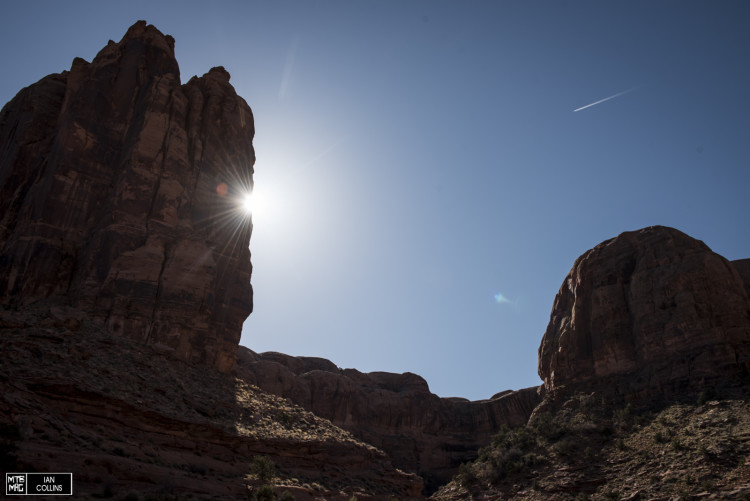 It turns out there was more to the story and we shouldn’t be surprised that the controversial California brand had done their research. The technical, undulating terrain of Moab would prove to be the perfect testing ground for pedal assist bikes.

Although Moab is known by mountain bikers far and wide as a mecca for slickrock singletrack, the motorized world hails it as a big destination as well. Specifically, Jeeps and Motos love to go exploring out on the rocks and the local community welcomes it. It turns out we were headed out to Moab not to illegally ride MTB trails, but to legally ride ride on trails for motorized off road vehicles.  Let’s talk about the Turbo Levo that we rode before we segue into the discussion about land use, trail advocacy, and other topics which will surely be inflammatory and controversial.  After all, understanding what exactly we were riding is critical in understanding why we were riding it.

Most of the pertinent information is laid out bare further down, but we realize that there is a lot to take in.  To provide an overview, Specialized have launched a new line of pedal assist mountain bikes that are unlike anything the market has seen before.  First and foremost, there is NO throttle.  You can’t just coast around without putting any effort in.  The battery adds power to your pedal strokes and matches your power as you push harder or back off.   Pedal assist bikes don’t really reach higher top speeds than a normal mountain bike.

Specialized managed to build a line of bikes for men and women, both rigid and suspended with very modern geometry and specs.  Dropper posts, plus size tires, 1X11 drivetrains and great suspension nearly span the entire line.  All of the Levo bikes house a proprietary custom made motor and battery discretely in the bike’s frame down low.  This helps keep the center of mass low, thus improving handling.  The motor drives the crank spindle via a clutch and the user can toggle between 3 power output levels from easy to reach buttons at the top of the downtube.  It’s also possible to switch/adjust those modes from a bar mounted pod or from a GPS device such as a Garmin.

As you’d expect, each mode and its respective output level affects the battery life.  You can ride for a longer duration on “economy” mode with less powerful assistance, and in “turbo” mode you get a the most assisted wattage at the expense of a shorter battery life.  “Trail” mode sits comfortably in the middle.  In the custom developed smartphone app, the rider can infinitely adjust the output of the 3 separate power levels amongst other variables.  Specialized made a point to avoid a bulky, vulnerable and distracting built in display.  Instead, they want the rider to focus on the trail and the experience.  Riders can choose to go fully display free and use the 10 LED’s on the power module as indicators of their battery life.

Now that you’re up to speed on the tech talk, let’s get down to the nitty gritty and discuss how the Levo rode.  After downloading the app to our phone and going through a relatively painless setup, we pedaled around the parking lot to feel the bike out.  Shifting and power transfer were both smooth, nothing was shocking really.  It felt like a normal bike, only substantially heavier.  We’re talking 1990’s DH bike heavy.

Anyhow, we headed out for our first ride on Sovereign trail.  The terrain varied a bit and reminded us of Sedona in many ways with quick punchy climbs and generally short descents.  Mainly it was technical and offbeat.  We quickly learned that you can’t really climb a Levo exactly the same way you’d ride a traditional bike.  At least on the ascents anyway…It was best to remain composed, sit and spin with the seat about an inch lower than normal.  The bike didn’t reward frantic bursts in difficult gears  but nor would this terrain on any bike.  You need to just trust that the motor will help you.  We quickly realized many sections of the trails we were riding wouldn’t be quite as enjoyable on a traditional bike.  We would’ve been gassed.  Don’t misinterpret that, we still got a hell of a workout; we just covered more ground in less time.

On the descents, the Levo was plenty capable.  It cornered well and was plenty responsive – composed and well behaved in rough, loose and rowdy terrain.  Due to the weight, it didn’t jump very well and super tight corners were a bit tricky as the chainstays are a good inch longer than most MTB’s.  With that in mind, they’re MUCH shorter than any other pedal assist bikes on the market currently.    After our first ride on day 1, we headed back in a sandstorm and honestly it wasn’t all that bad because of the added power.  We zipped back quickly with a head full of mixed feelings and a great deal of information to digest.

Ride number 2 was in the Slickrock area.  Our tester had never ridden slickrock before so it was a foreign experience in more ways than one.  The undulations in terrain were similar to Sovereign trail but with less obstacles and more traction.  We pedaled up some ridiculously steep sections with relative ease and they added to the continuity of our ride; especially as we began to adapt to the bike and adjust our style accordingly.

Speaking of continuity, what was interesting about these rides was that the bike leveled the playing field in terms of a group ride.  Since we were all climbing a bit faster, there wasn’t a bunch of waiting around for the slow guy, or conversely, struggling to catch the fast guy.  As Sean Estes from Specialized put it : “It’s like fast forwarding through the commercials”.

After day 1, we realized that we truly wouldn’t have enjoyed these trails as much on a traditional bike, nor would we have climbed as high and gone as far.  Moab is a rather unique place though and we weren’t on MTB rated trails.  Many of the rides we do in California are comprised of an hour climb and then 10-15 minutes of descending.  For rides like that, we’d likely never choose the Levo.  But are there riders out there who would?  Absolutely.

On Day 2 we rode Amasa Back trail but we stayed on the motorized section.  Early in the ride we bumped in to a group of guys out on motos trying to ride through a technical section.  Some of the more boisterous Specialized riders got through it just fine and impressed the moto dudes.  We carried on and saw some amazing views; covering a massive amount of ground in short time and getting more and more comfortable on the bike as time went on.

Functionally, Specialized have aced it.  This bike addresses and fixes everything anyone has ever griped about on a pedal assist bike.  Considering this is their first effort at a performance pedal assist bike, they’ve knocked the ball out of the park.  Although it’s a bit heavy, over the years as the weights come down it will just become more enjoyable and may begin to draw a more “core” crowd, but that won’t be an easy sell; it will be met with some resistance. 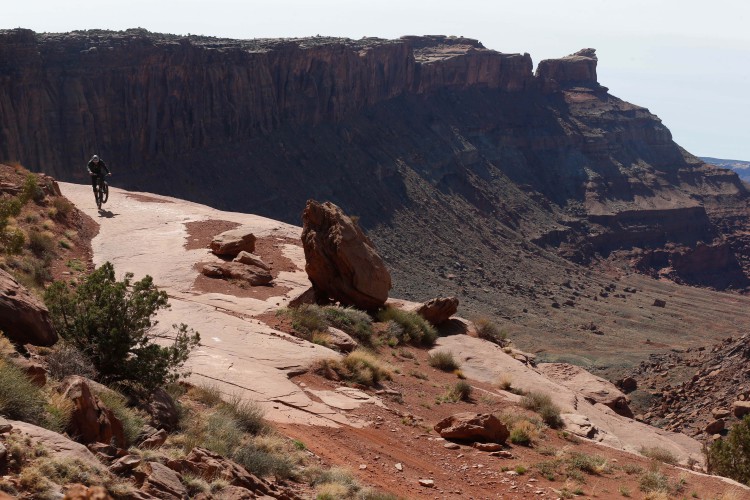 The same question keeps surfacing is “Is this the future?”

To which we’d respond : “Do you really think traditional bikes will be a thing of the past?  The answer to both questions obviously is no.  These bikes, after much resistance will eventually find their niche but they won’t fully replace 100% human powered mountain bikes.  The main issue they’ll be up against will be trail use and advocacy, particularly in the US.  The way that two wheel categories are defined and how land is divvied up amongst said categories is critical and has already begun to cause a rift.

So that begs a more suitable question : Who is the Turbo Levo for?  In a more big picture context, who is a capable, high performance pedal assist bike for? 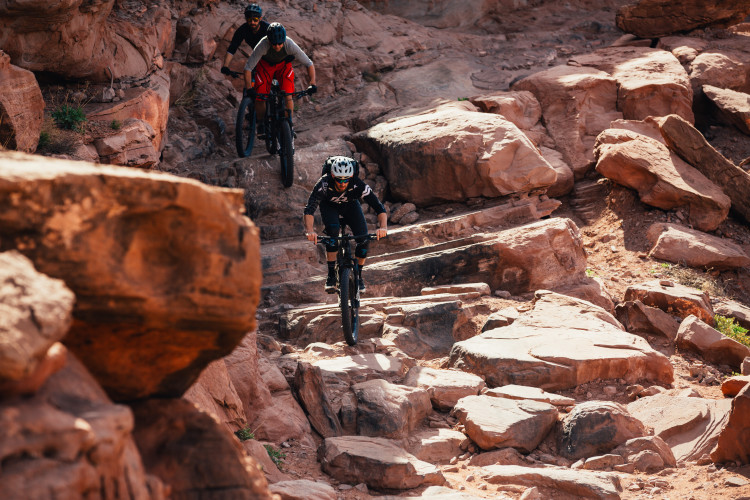 An ex-enthusiast with bad knees? Someone recovering from cancer?  A photographer/videographer with a 40 pound bag?  Or a core rider who just wants to go farther, faster?  Sure. Why not all of the above?

The Levo didn’t cause any more erosion than a normal bike.  It hardly made noise and we couldn’t do burnouts on it, but we definitely tried.  As mentioned before, we didn’t reach greater top speeds and nothing about the bike ever made us feel out of control.  In fact, quite the contrary.  Its weight and ability to push through the weird, off beat climbs is the kind of characteristic that might leave a first time mountain biker with a more positive experience and apt to come back for more.  We were also nearly as tired from 2 days riding on the Levo as we would be on any other bike; the difference was simply that we covered way more ground.  In the long run, don’t take our word for it.  Go demo one with an open mind once they’re available and think about the possibilities it opens up in terms of riding trails that may not have been considered as fun on a traditional MTB. While you’re at it think about who this bike could benefit…

On one last note : once we got home and we went for a ride on our go-to loop aboard our classic trail bike we found the sweet was that much sweeter on the way down.