This time we tested the Canyon Exceed CF SLX 9.9 Pro Race, a hardtail 29er whose frame weights only 870gr. It is 300gr lighter than the previous model, the Grand Canyon SLX, which weighted 1170gr. 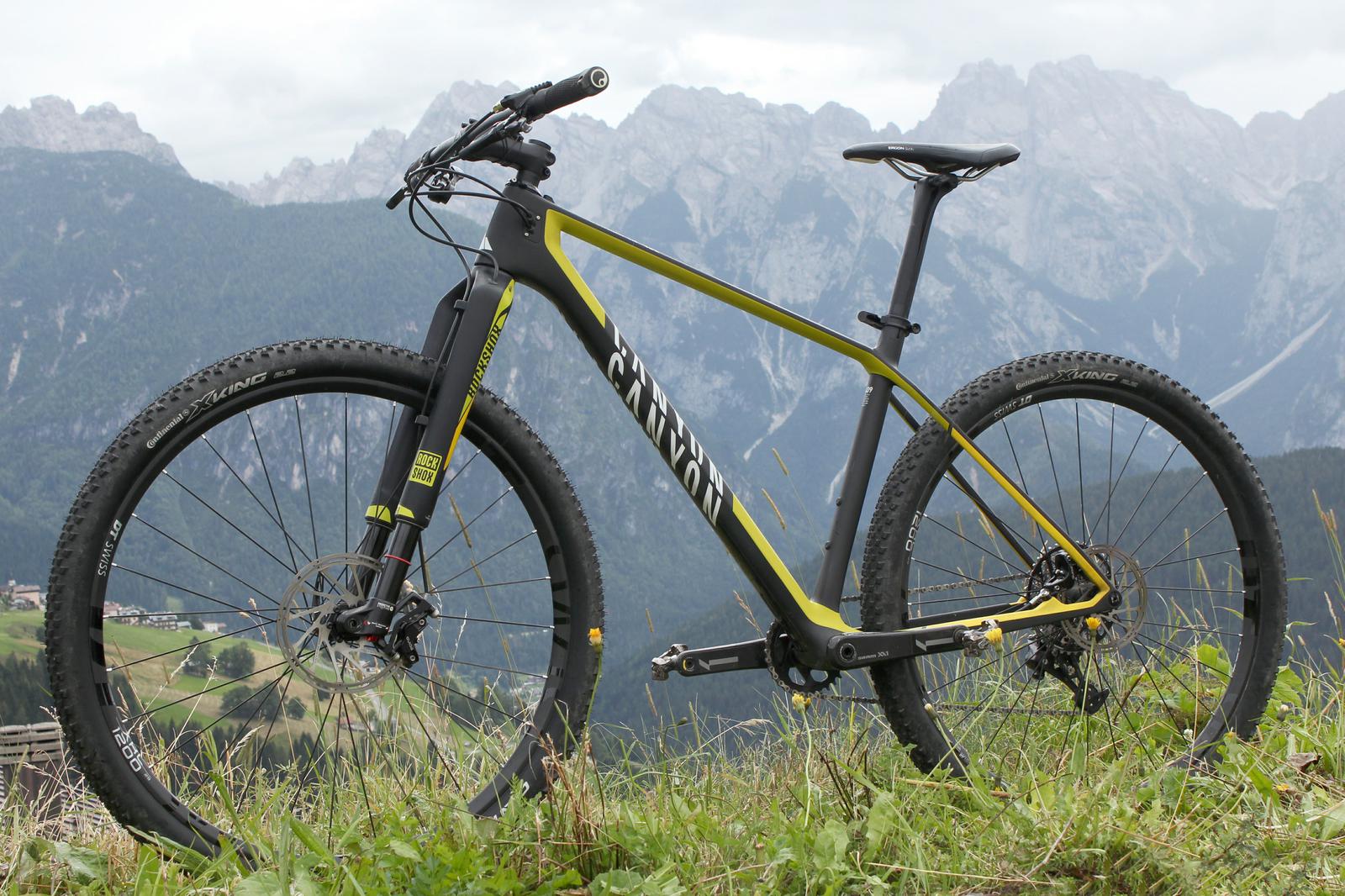 Though it was showcased in August 2015, on this bike Alban Lakata had already won the 2015 marathon World Championship during the Sellaronda Hero at Selva di Val Gardena.

The Exceed Cf SLX 9.9 Pro Race was supplied as in the catalogue. The fork is a 32mm RockShox RS-1 with X Loc remote on the bar. The transmission is a SRAM XX1 groupset with 32tooth chainring and the classic 10-42 cassette. 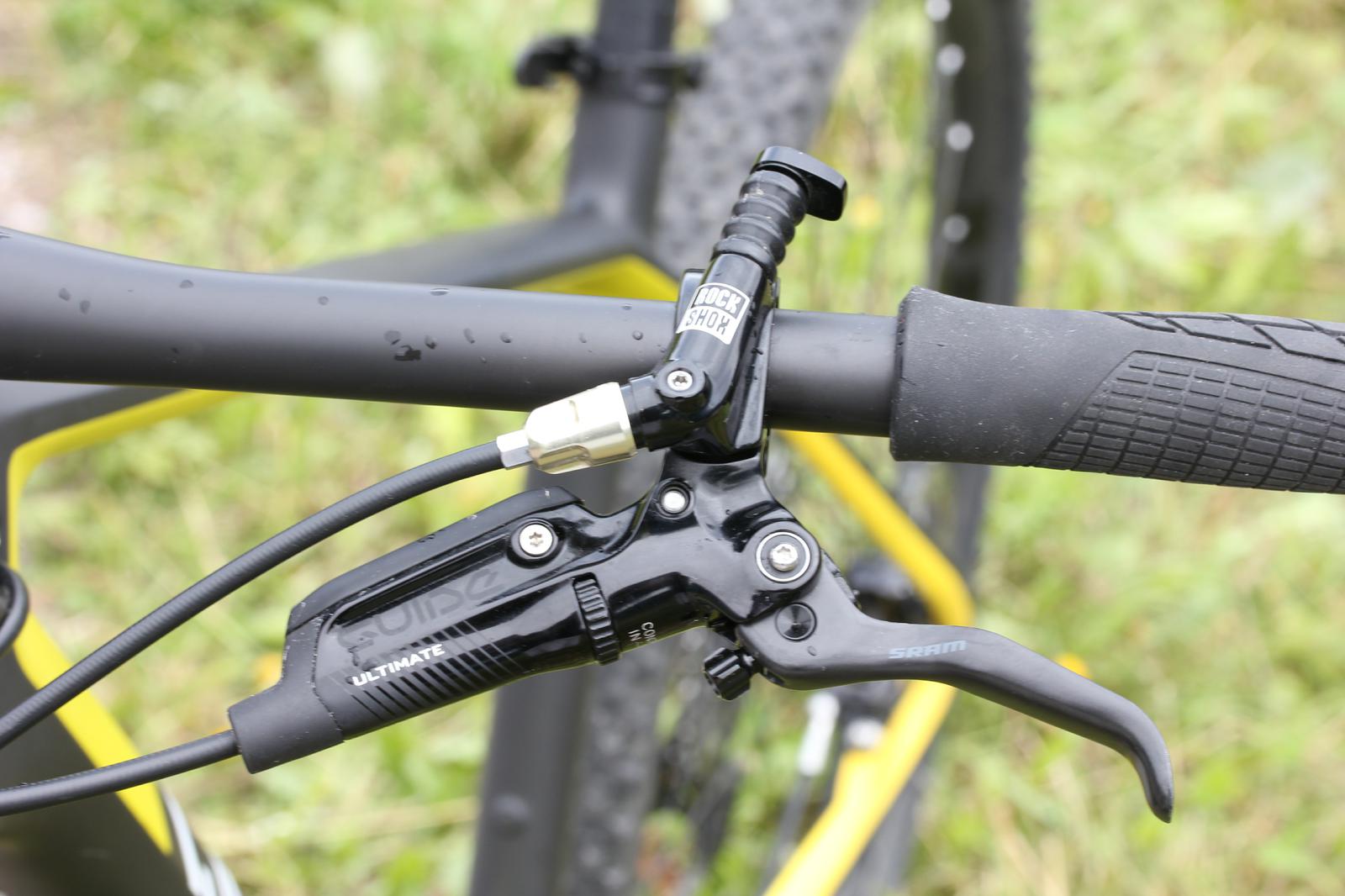 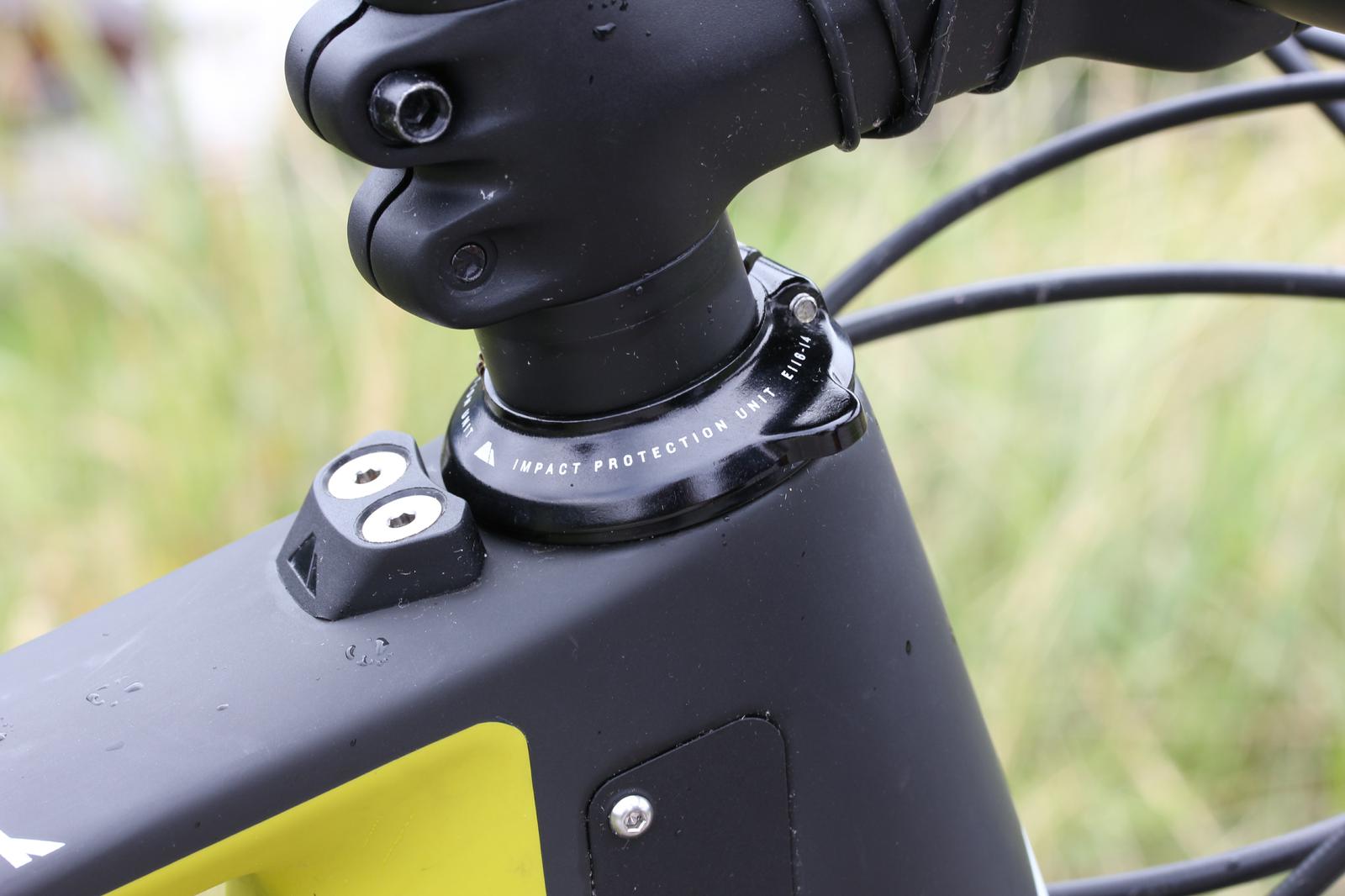 The IPU (Impact Protection Unit) on the headset, together with the integrated limit stop on the top tube, placed near the headset, prevent the total rotation of the handlebar. In this way, in case of a fall, brakes or derailleur levers can’t scratch nor damage the top tube carbon fiber, which happens fairly often to xc bikes. 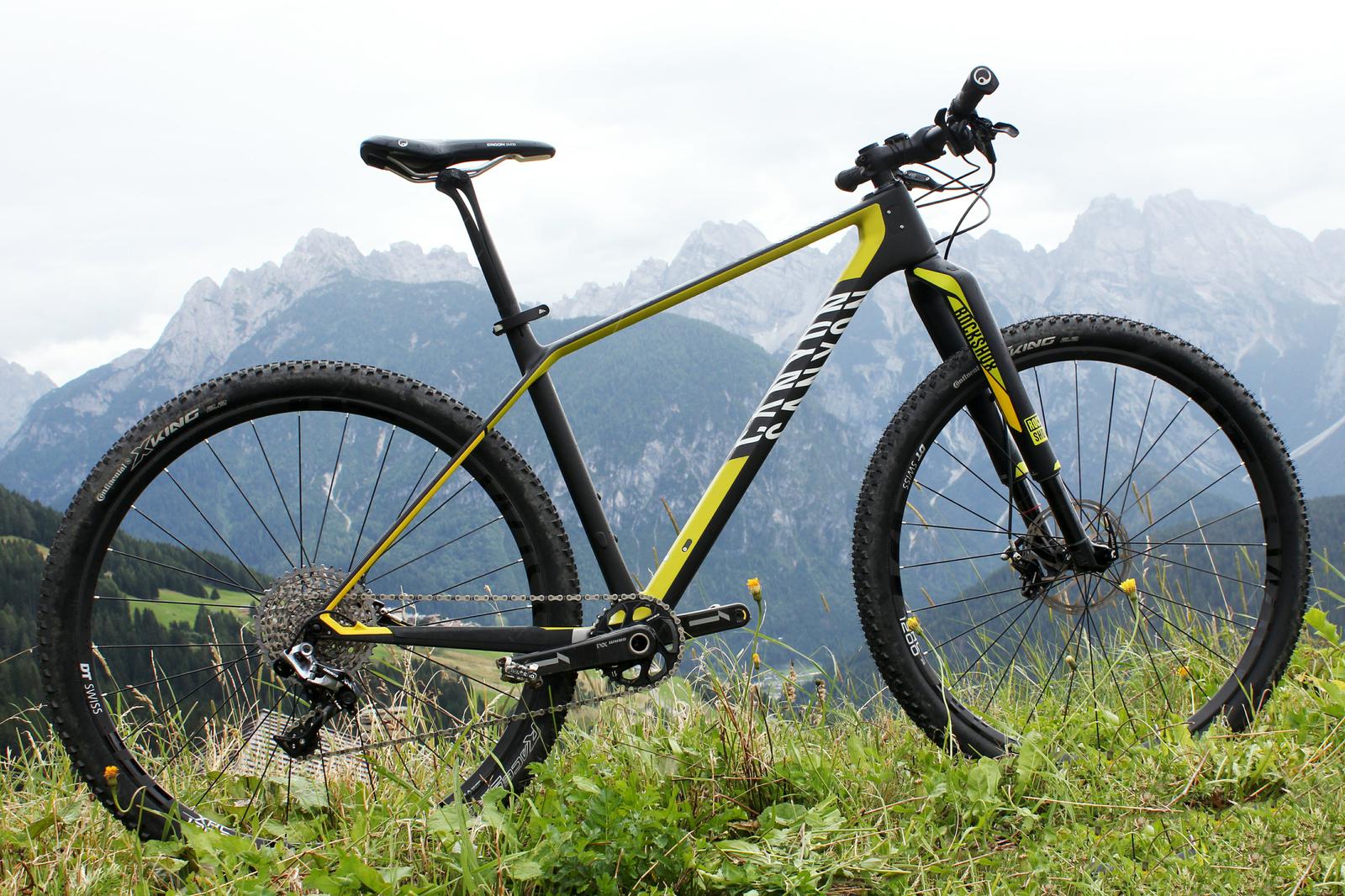 The measured weight of the tested L size bike, without pedals is 9.200 kg.

We tested the Exceed Cf SLX 9.9 Pro Race for about a month on the Venetian and South Tyrolean Dolomites, riding mainly competition trails including the 3 Epic Lavaredo Supertrail, focusing on both fast and technical mountain sections. 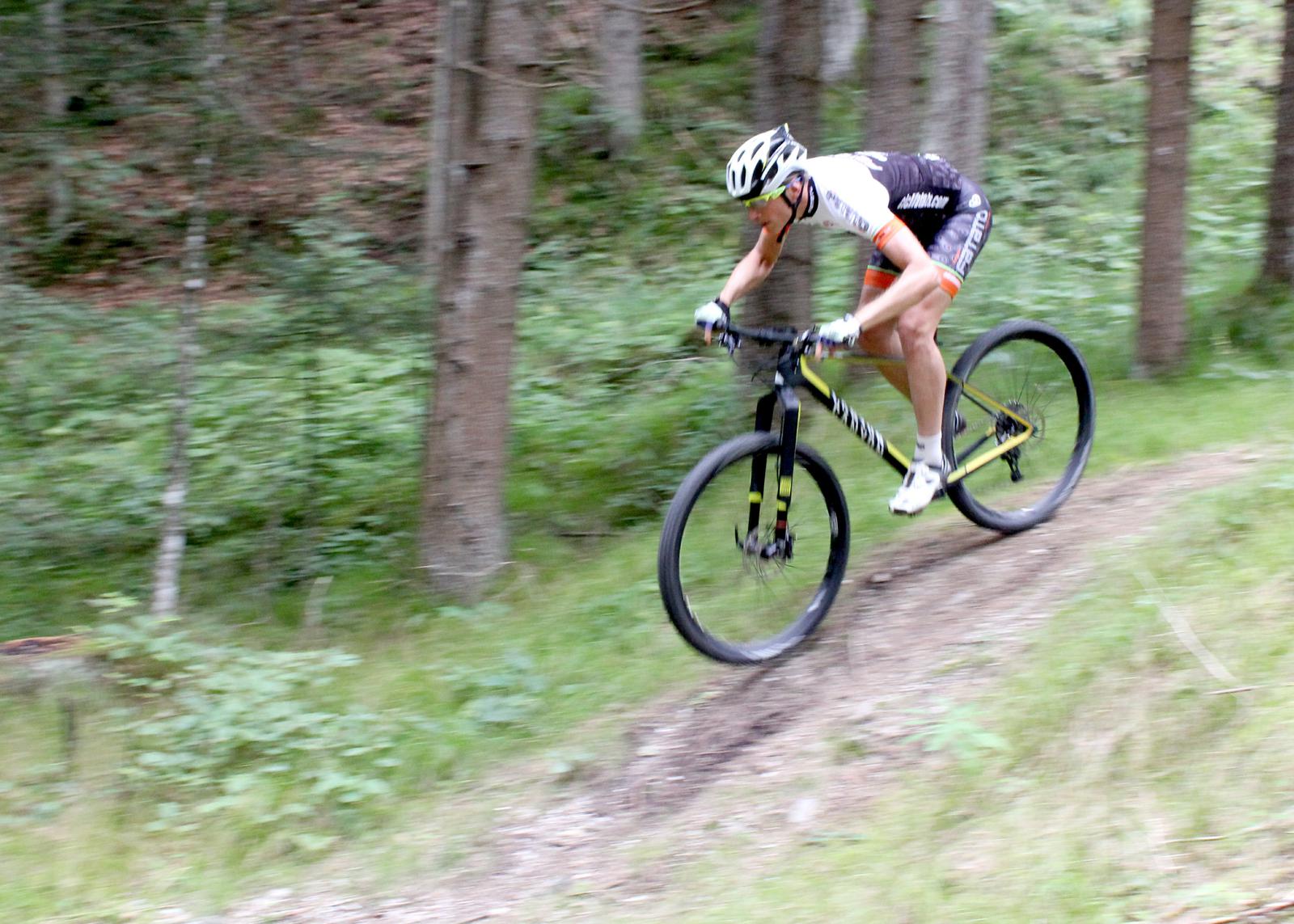 The Exceed Cf SLX 9.9 Pro Race is an excellent bike for all terrains. The bike is really stiff but never too nervous, confirming the tendency of producers to build slightly less reactive bikes. In this way the bike is easier to handle and pedalling becomes more efficient and comfortable off-road, resulting in less fatigue and more stamina.

These characteristics are conveyed by the new Exceed frame, since we can easily make a comparison with the Grand Canyon Cf Slx 9.9 Team Oneby, with almost the same specs, which we tested one year ago.

The Exceed confirms its excellent climbing attitude, even on steep slopes. Thanks to its light weight and the stiffness, the pedaling energy is not wasted, furthermore, the geometry keeps the weight well centered on the bike, especially on really steep sections, where the light-weighted wheels (considering they’re factory ones) at low speed are not a limiting factor at all. We’ve already mentioned the relaxed behaviour on bumpy terrain, despite the tubes installed on the tested bike, which made us choose not so comfortable pressure values, approximately 2.2/2.3 bar.

The Exceed is really precise and handy on corners and on technical narrow sections, mainly thanks to the RS-1 fork, whose stiffness has already been proved many times during other tests. The fork inverted design, especially when you’re not used to, makes it a bit complicated to mount the front wheel, because you need to manually align both stanchions with the hub hole and the thru axle. 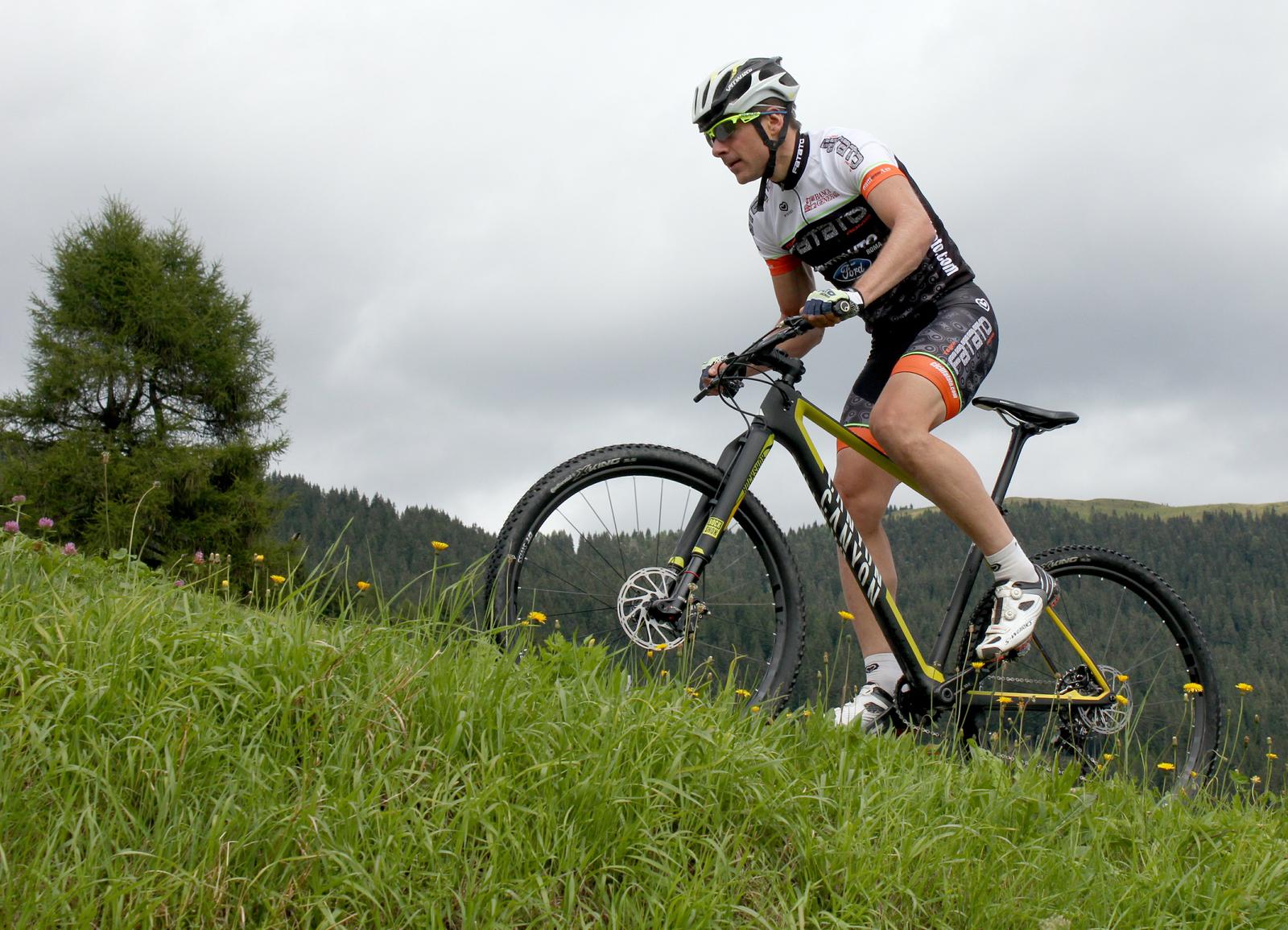 Downhill, at least in comparison to other tested xc hardtails, the Exceed turned out to be a step ahead: stable and easy to ride as a trailbike both on steep and bumpy sections, even at high speed. All in all, this bike rides nice also on long and hard descents (such as the Lavaredo supertrail). The only negative aspect are the vibrations, which in the long run bother and tire your hands and arms.

This sensation, in our opinion, is mostly caused, rather than the bike, by the Ergon handlebar grips which felt quite hard. Some foam or neoprene common grips, which are also lighter and cheaper, could definitely soak up more vibrations, thus making the ride more comfortable, especially when, pedaling out of the saddle, the weight moves forward.

The 2.2 Continental Xking tires, though not the most flowing ones, have always provided optimal cornering and braking traction and grip, even under pretty slippery conditions.

The transmission XX1 setup, with the 32 chainring and the classic rear 10-42, is quite demanding on long and hard climbs. Riding long trails with a lot of climbing terrain, that is the only real limiting factor of this bike, which otherwise doesn’t stress the rider too much in the long run. 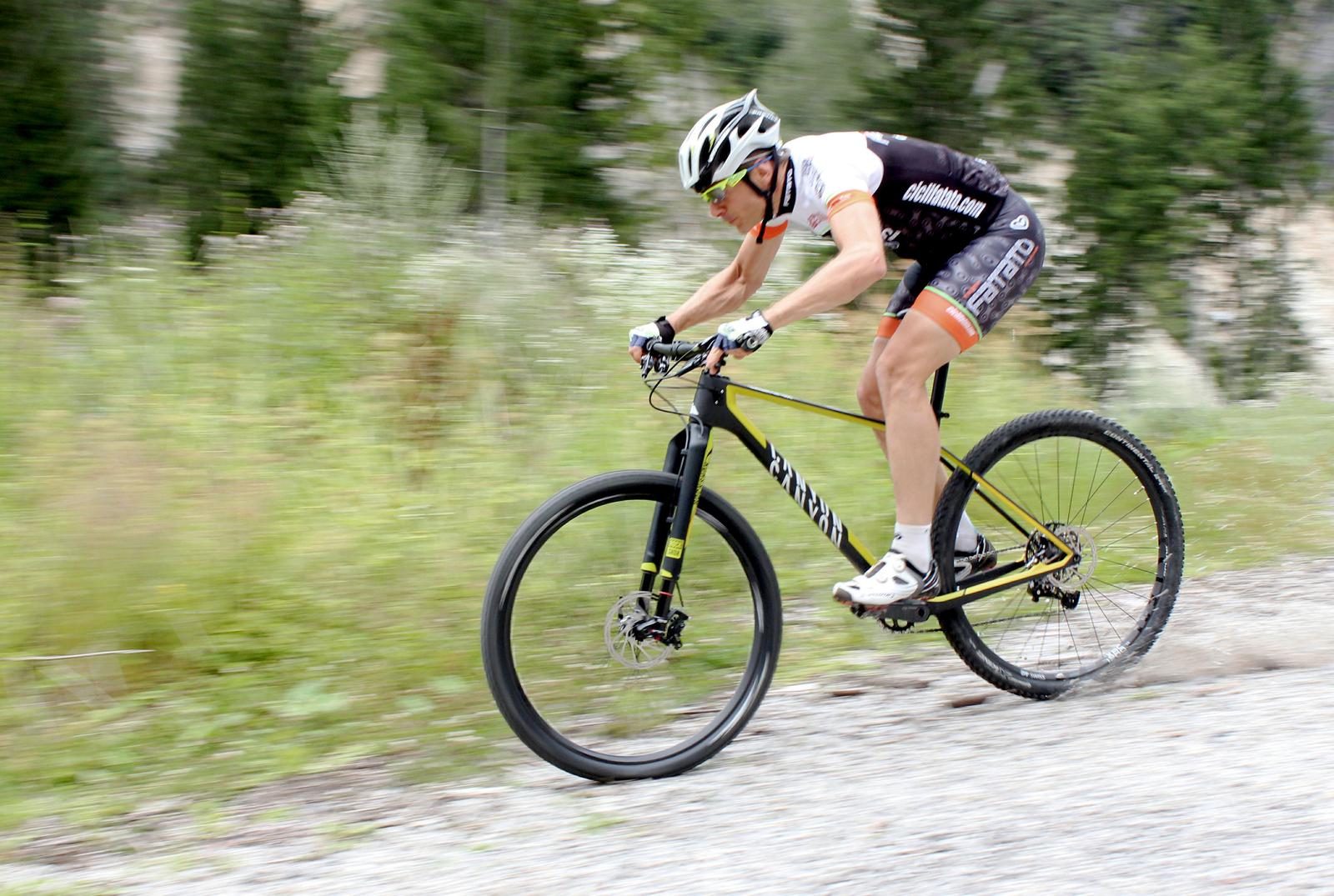 The SRAM Guide Ultimate braking system has always performed well in every situation. It is adjustable and powerful and keeps its efficiency also after long descents which heat the system up. The levers are really ergonomic and more comfortable with respect to the old XX model, and the handling is slightly better, especially on long descents.

The Canyon Exceed CF SLX 9.9 Pro Race is an excellent marathon bike, also considering the price. The main quality of the Exceed is to be high-performing and at the same time not too extreme to ride, thanks to a comfortable and yet stiff frame. The 1×11 drivetrain, on the long distances of a marathon, is not for everyone. But there’s no need to worry because Canyon offers also the Exceed with double chainring or with the new 1×12 SRAM Eagle drivetrain.

From a purely aesthetic point of view, the German essential style is combined with an extreme care of the details, giving the bike an elegant though aggressive look at the same time.