During the SRAM press release in Moab we got to try the Canadian Devinci Troy Carbon. As you can see from the photos, the whole assembly is custom SRAM/Rock Shox, not available for purchase as a complete bike from the Devinci range. You can, however, buy the frame and mount it at will.

This is a full carbon 27.5″ with 140mm of rear wheel travel, equipped with the Split Pivot scheme patented by Dave Weagle, a system designed to keep active suspension even when braking. Devinci defines the Troy Carbon as a trailbike, a definition which, translated into the European market, finds its counterpart in the all mountain bike category.

In fact, with 150mm of front suspension, managed by a Pike RCT3 Solo Air, the Troy becomes a rather aggressive bike, while remaining completely easy to pedal. 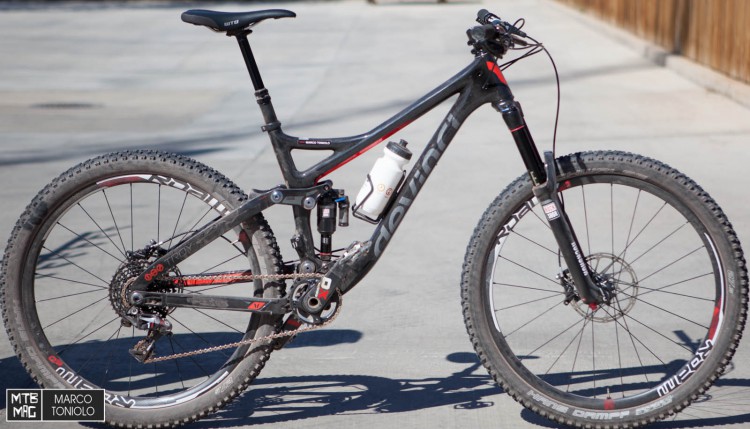 The rest of the specs will satisfy even the most experienced rider:

The total weight of the bike is 12.3 kg without pedals. 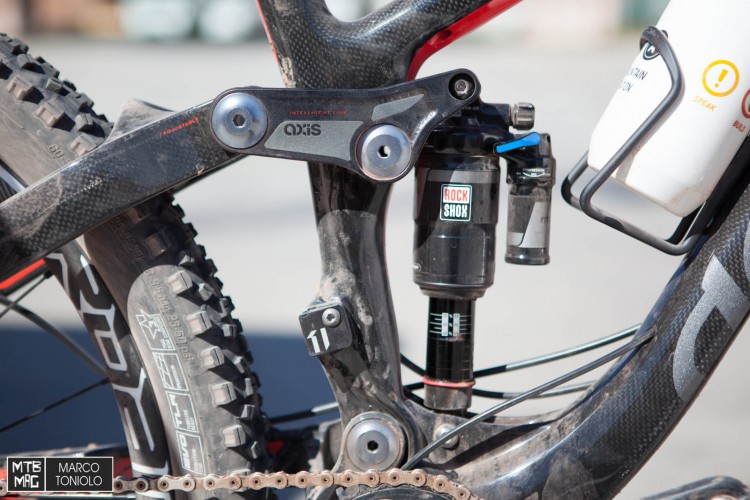 The size of the bike s an M, and its top tube is decisively short. The tester is 179cm tall, as can be seen from the chart listed below, that measurement falls exactly between sizes M and L. With the benefit of hindsight, an L might have been better.

The sloping of the head tube itself is very accentuated, a feature that is appreciated on the field in case a restart on a steep climb is needed. 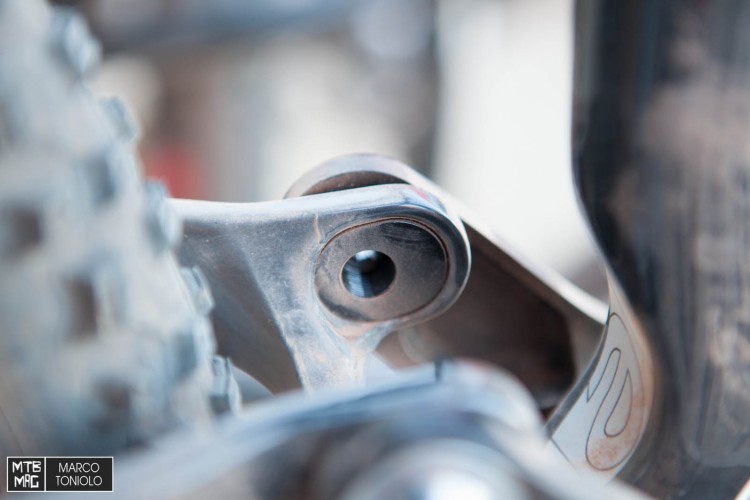 Thanks to an eccentric positioned in the rear joint of the Axis link, one can change the geometry of the bike with an Allen key. You can see the differences in this chart: 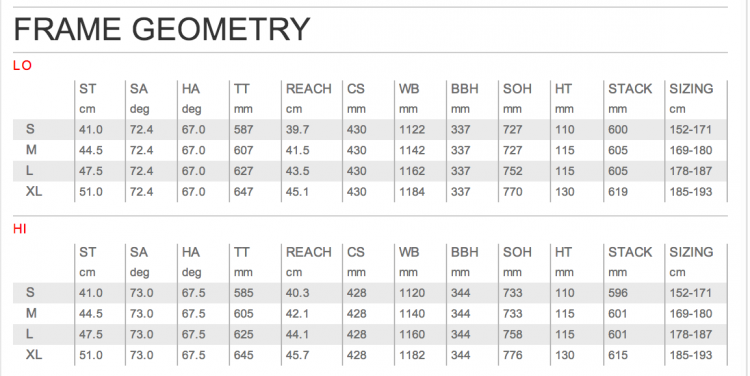 In the Low position (which was used during the test), the height of the central movement is 337mm, which then winds up being 20mm below the wheel axles, a number that is interpreted as excellent stability when taking curves.

The rear seatstay is rather short (for a 27.5″), which is noted in the agility of the Troy and in the ease of lifting the front in order to jump over obstacles. This feature is then joined to what was mentioned before about the top tube, resulting in an extremely agile bike. 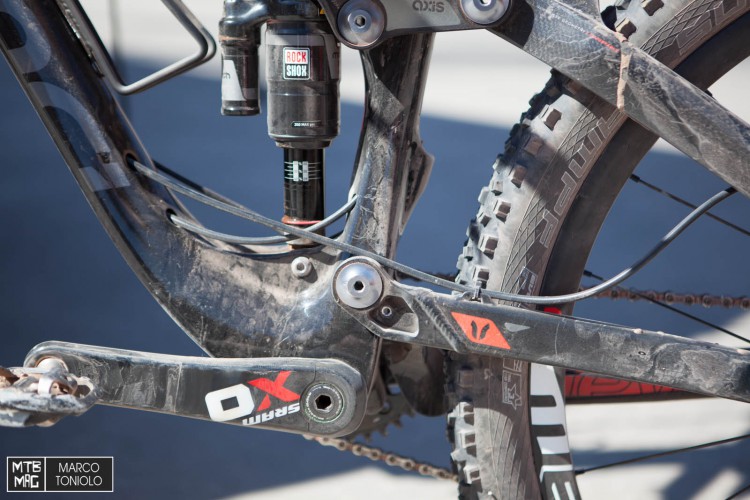 The bottom bracket is quite massive, while internal cable routing gives an elegant and very beautiful look to it, with the structure at sight carbon. 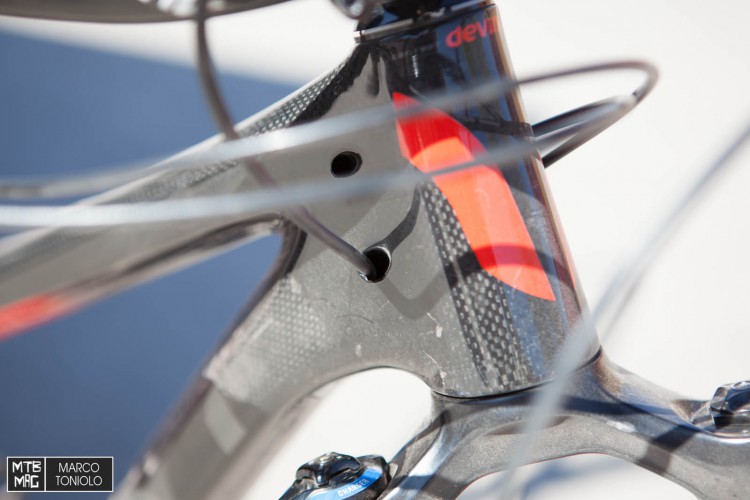 Take into consideration that we only tried the Troy on trails, both uphill and downhill. No fire roads. This involves pretty rocky paths with steep ramps and tight switchbacks that, when going uphill, requires the rider’s full attention.

The very short top tube doesn’t help in these situations, because the front end tends to raise itself before it should. It should also be noted that, after a period of getting adapted to the new bike, we were able to pedal all the technical parts of the uphill without much difficulty, notwithstanding the fact that a size L would have been better and would have saved us a little extra effort. 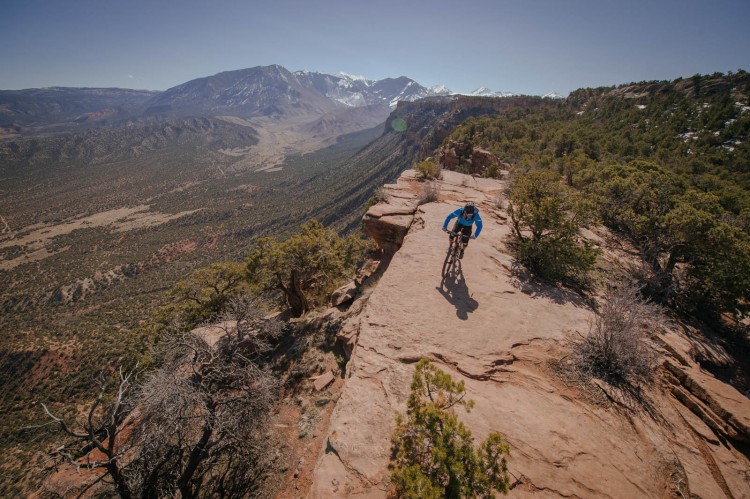 Already when going uphill we were able to appreciate the main features of the Troy, which is its agility and which we will talk about again in the section dedicated to the downhill. Making tight turns is very easy.

Once the Monarch lever is positioned in the middle position, the rear suspension gave us good traction for every situation, majorly copying every unevenness of the ground. The tires that are tubeless and inflated to around 1.8 bar for the front and 2.0 bar for the back, did their part.

At the beginning of the test we pointed out how the definition of “trailbike” went hand in hand with the Troy. Putting the bike in a downhill drive proved this more than ever: the rear suspension is the most sensitive type you’ll find anywhere on a bike for this sort of activity (as a reminder: 140mm). If the Split Pivot system contributes to this sensation, the new Monarch Plus seems to have been pimped out for good by Rock Shox.

Since we can’t tell you about this shock until the first of April, with this article we won’t reveal what has changed. But I will say that what was changed, changed for the better. 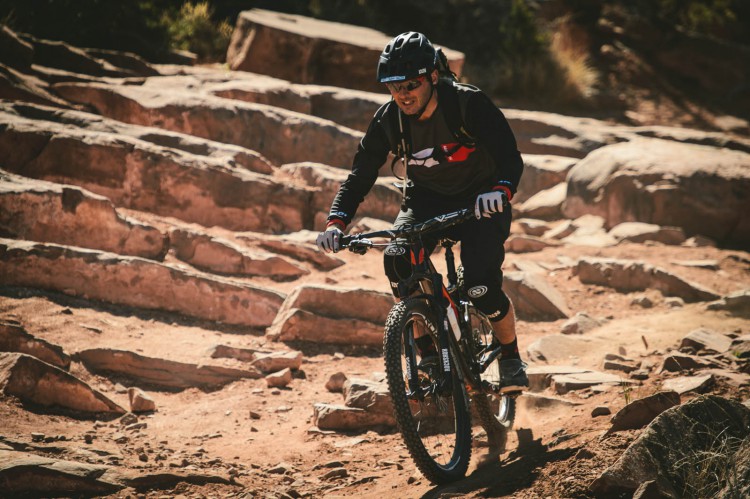 Rivers of ink have already been used on the Pike, we can add that it fits well with the new Monarch Plus in terms of sensitivity.

In the picture above you can see the Troy on the Porcupine Rim, a classic of the Moab area, with lots of rocky spots, tons of jumps (if you choose the more direct lines) and various relaunch ramps with steps that need to be taken with speed or pedaling at full speed. Both the bike and rider are put to the test on the 20 km trail, and the results that we obtained were unique after having ridden the same trail the very next day with a different bike: the Devinci Troy “SRAM Edition” is now placed among the bikes that we would very much like to have in our garage. 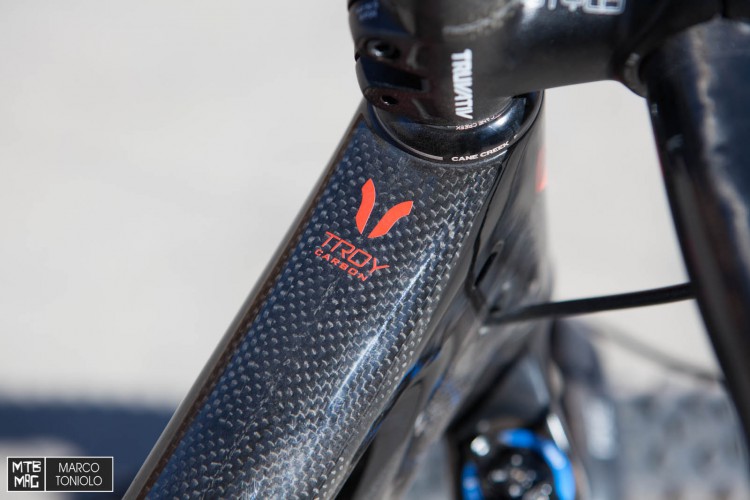 Sure, the carbon wheels are a luxury that not everyone can or wants to afford, when on a trail like that, you understand their value: we beat them against the rocks several times, especially when the tires were bottoming out, but the Roam 60 didn’t have a single fold. The result of our specific test was very clear.

The 67° steering angle, in a Low position, is the norm for a 27.5″, and is a good compromise between agility and stability. The latter is kind of the limit for the Troy, when fast, also because of the short head tube. Let’s say that for a 140mm trail bike it’s more than good but that, given the characteristics of the bike on a downhill, one finds they’re going with the throttle even where a bike of this type would use the brakes more. 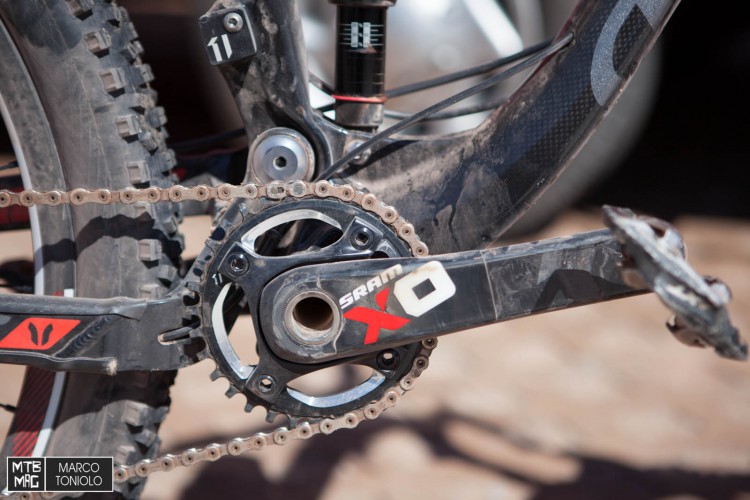 The overall rigidity of the bike is exemplary: precise in curves, it’s a pleasure to “crush” with the internal knee. The combination of the carbon crank plus the oversized bottom bracket stands out as a positive aspect.

Speaking of the crankset: the X01 group worked without any problems, remaining precise when changing and reliable in terms of retention of the drop of the chain. Even without the chain tensioner, we never had any problems. It was for a good reason that the engineers of the XX1 came to Moab to try it out, two years ago. The new SRAM Guide brakes also deserves a mention or two, even if we just presented them to you not long ago. The final part of the Porcupine Rim is rather tough on the brakes. On the singletrack, the Guides didn’t miss a beat, remaining precise in maintaining the proper braking point and powerful even when the brakes were nice and hot. You couldn’t hear a whistle or noise coming from the 7 people in our group as we descended (without taking a break) towards the Colorado River. Forward: we realize that this specs come close to the ultimate top of the line that’s available on the market. Still, the quality of the frame is out of question, even in cheaper builts. Consider this test an episode of “Top Gear”.

We often speak of “ultimative bike”, a term which in itself is an oxymoron, given the many facets of a modern day mountain bike. However, in most cases, with the Devinci Troy Carbon built like the one in the test, you’ll find you’ll do almost anything you want without wishing that you were using a different bike. An excellent compromise between uphill agility and downhill fun, the Canadian bike is equally at home on long cycling trips as well as the most challenging and technical downhill descents. Just one thing, be careful what size you buy.

Life warranty on all frames.