The Ibis Mojo HDR has been around for a couple years in the 160mm travel/26” wheeled format.  However, more recently the highly adept HDR has taken shape in the 130mm travel/650b version. By simply changing the upper shock mounts and utilizing a shorter shock the bike 26” bike can easily be converted to 650b. Although most consumers won’t be swapping back and forth, this is still pretty nifty and the bike lends itself to being highly versatile. At $6764.00 the bike comes in at a competitive price considering it’s build.

Our test bike came equipped with a 140mm FOX 34 fork.  The straightforward and sturdy front end featured a much improved CTD damping circuit for 2014 compared to 2013.  Climb/Trail/Descend – 3 different compression settings to cover all types of riding via a switch on the right side of the crown.  Out back – the FOX float CTD handled the rear suspension in similar fashion. 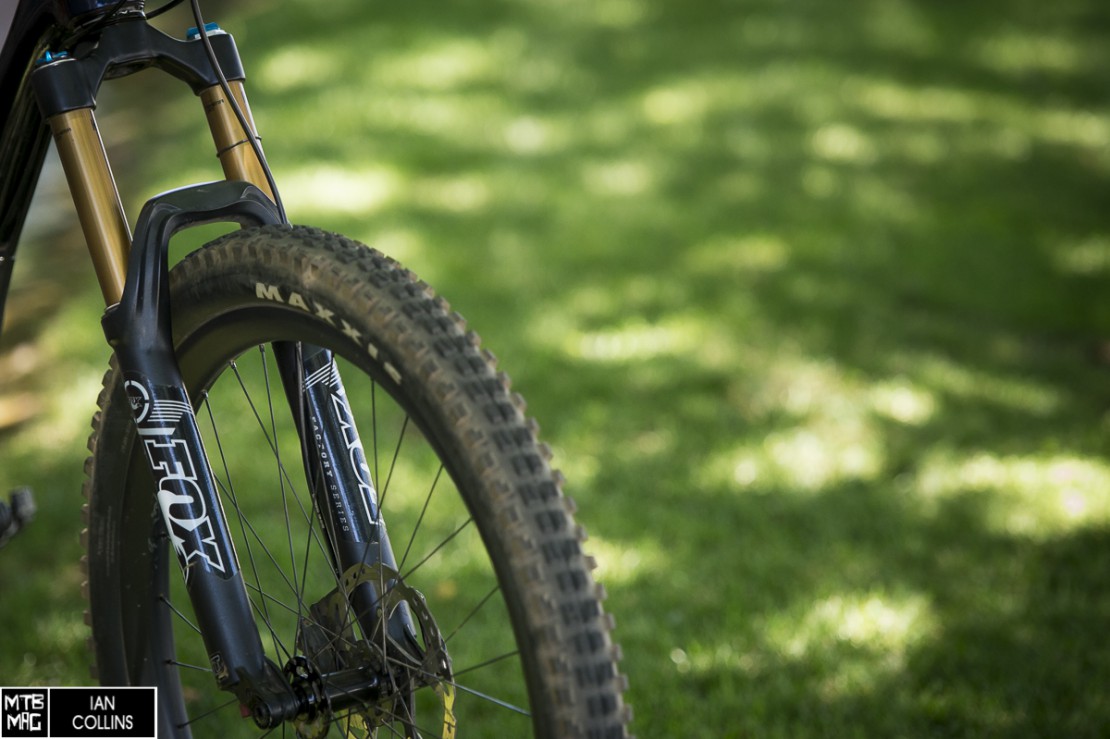 For gearing, our bike was dialed in with the consistent and reliable 2 X 10 Shimano XT drivetrain. Tried and true, totally straightforward all the way around.  This is Shimano’s mid range high performance drivetrain. 24/24 tooth up front and an 11-36 tooth cassette out back provides all the range most riders will need, and the clutch mechanism in the rear derailleur kept everything shifting smoothly and quietly. A KS Supernatural dropper post and some simple, reliable Ibis house brand bits to finish off the cockpit. The carbon bar was a nice touch, but a snippet on the narrow side. The bike came with a 90mm stem – we feel that is quite long for aggressive riding and opted to replace it with a 60mm stem. 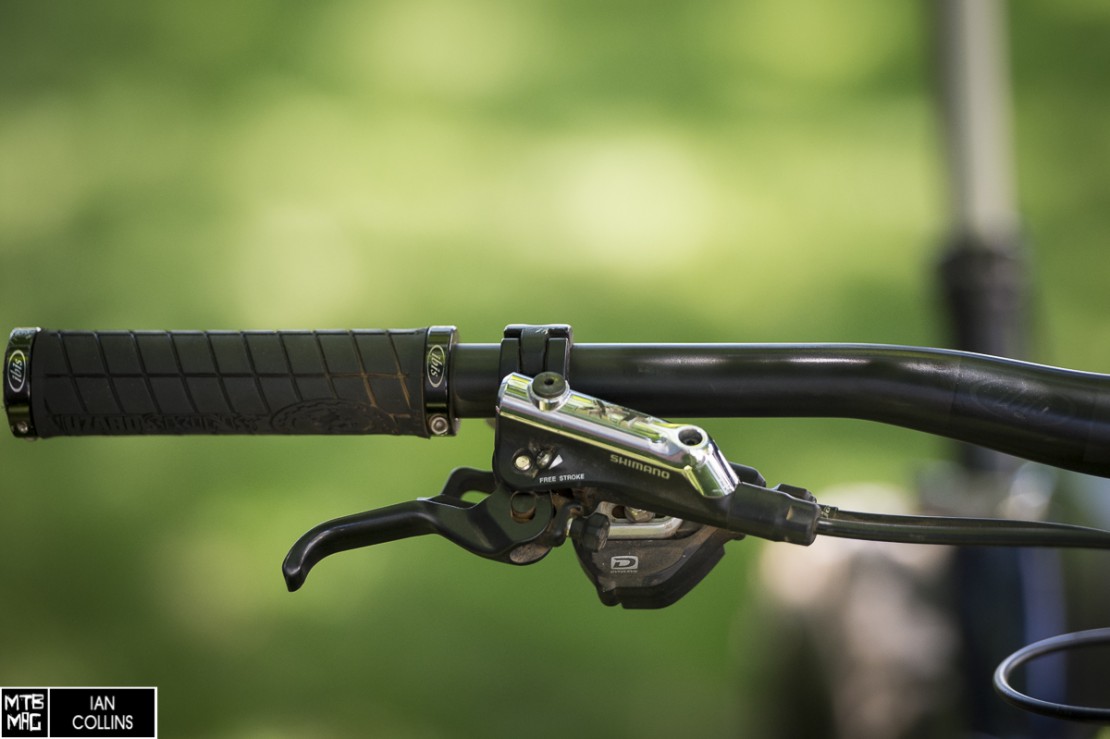 One of the highlights of the build is Ibis’ house brand 741 wheels fitted with 2.3” Maxxis Minions. We recently tested these wheels, to see what we thought –  CLICK HERE 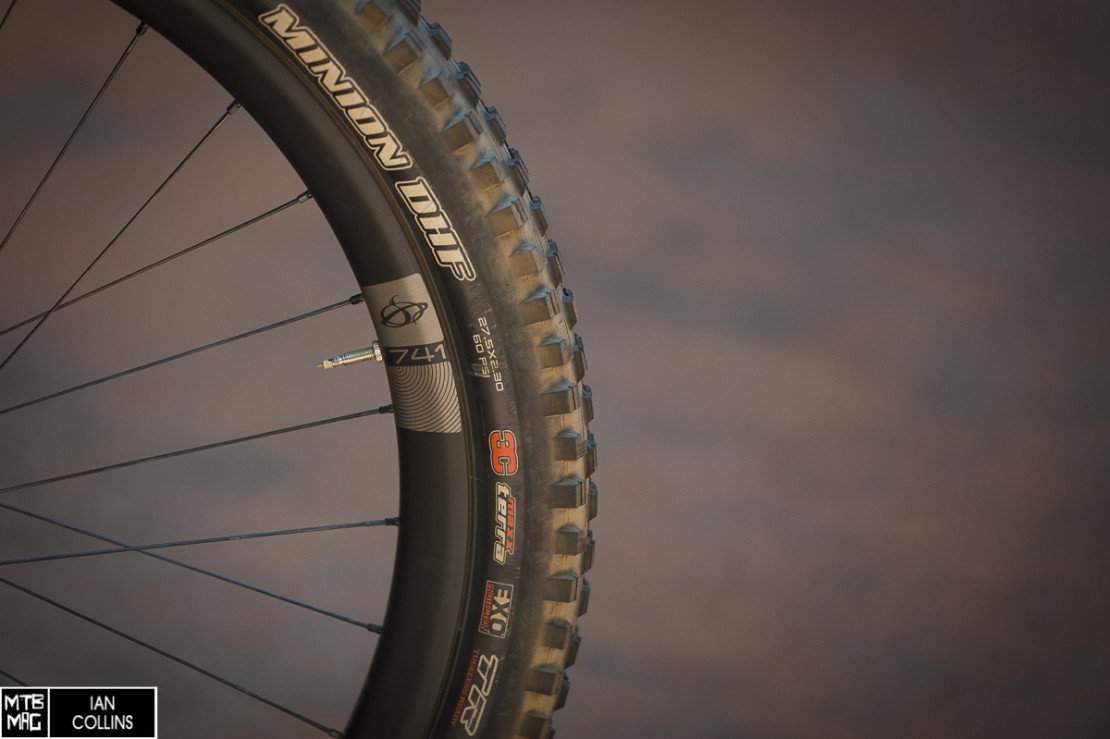 The rest of the spec rounded out with a set of e.13 cranks and bash guard.  Stiff, tough cranks and a little extra security to prevent the outer chainring from getting banged up. Perfect setup for a mid duty trail bike. With a relatively balanced feel and dw-link suspension, the Mojo climbed really nicely. Great traction and no pedal feedback – nice and efficient. Nowadays we’re used to bikes with 70mm stems or shorter. As mentioned earlier, our bike came with a 90mm stem. That felt a bit long, but the top tube is on the shorter side of things so we assume that was to balance this out. We switched to a 60mm stem to get the bike handling a bit better on the downhills, but it had us feeling a little bit cramped and sitting a little ways back on the climbs. Our tester is 6’1” with long limbs and was riding on a large frame. All in all, the bike climbed like a champ, but could stand to gain from a slightly longer top tube and a shorter stem. Then again, it all depends on the rider and his/proportions. The Mojo HD descended like a champ. It was hard to believe the bike had only 130mm of travel at times. The fox float CTD shock handled mixed terrain quite well considering it’s petite nature and lack of a piggyback. One thing we can attribute the confident nature the bike had when pointed downhill was the wheels. As mentioned earlier, we ran a separate test on them – they are a massive confidence booster when things get rowdy The bike remained very neutral under braking out back, and was torsionally rigid under hard cornering.  The fork was a little on the divey side under steep bits and hard barking, but this is said to be alleviated for 2015.  The geometry was near perfect and we really felt like we were riding “in the bike” even despite the fact we were wishing it was slightly more stretched out. Overall super snappy and responsive, the Mojo’s cornering prowess was fantastic. This may have been partially due to the compact feeling reach with the 60mm stem, but nonetheless, the bike handled the turns like a champ! Rough, choppy ruts and big holes didn’t seem to phase the bike much either. The added volume in the tires definitely helped here. Even with a “normal” set of wheels, we’re confident in saying the bike would handle adverse terrain confidently. All in all the bike is just a good solid package with no major flaws. It can handle most terrain you can throw at it. If you’re looking for an enduro race bike or something for really extreme riding, you may want to look elsewhere. For anyone ranging from a beginner to an advanced rider looking to cover anything from just daily riding on the local trails to weekend warrior road trip adventures all over the map this bike will do the trick. The frame and the wheels really stole our heart.  The suspension, drivetrain and cockpit got the job done, but didn’t blow our minds. All in all though, you can’t expect primo bits and pieces when you get a complete carbon bike with carbon wheels for under $7,000. The Ibis Mojo HD is a stellar bike.