While the debate over wheel diameter has been raging for a few years now, the latest and greatest topic of discussion with has become rim width.  Along with varying widths comes different rim profiles. Recently Ibis entered the wheel market with offerings in both 27.5” and 29” complete sets, all priced at $1299. They offer a “standard” 28mm width 29” wheelset, as well as 41mm wide sets in both 27.5” and 29”. All of the rims utilize a different profile compared to a traditional rim. Ibis utilizes a hookless bead with stouter sidewalls, offering more impact resistance. What is most impressive is that the new wheelsets come in at very competitive weights and even more impressive prices as well. The average complete wheelset is well over $2,000. While $1299 isn’t cheap by any means, Ibis has managed to enter the market with the first carbon wheelset that is reasonable. For the last few weeks, we’ve been wailing the 741 wheelset on a Mojo HDR at our local trails for a few weeks. Let’s see how they’ve held up! 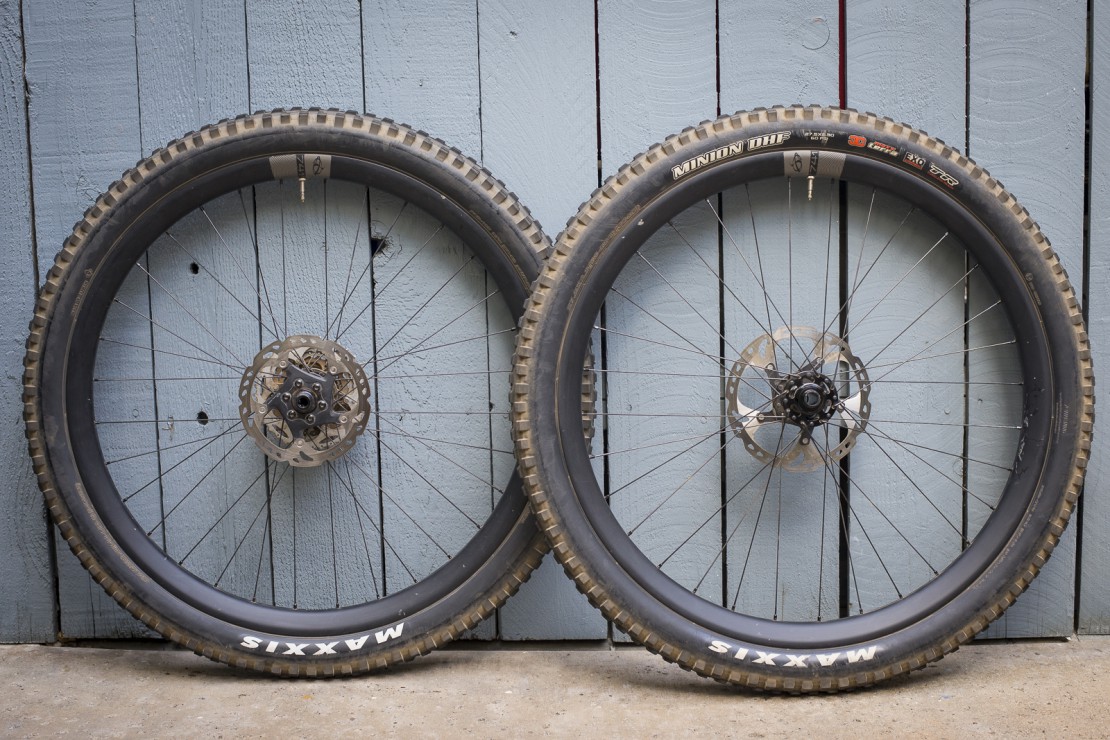 The first thing you’ll notice about the 741 wheels will be the svelte understated grapics. All black and understated, these wheels look really really good. The rim is coated so you don’t really have that carbon look, but you know its there. Next you will notice the rims width. It’s massive – at 41mm wide it also provides a very different tire profile, which in turn provides very unique ride characteristics – more on that later. 32 triple butted spokes lace up to these fat rims via a set of nicely refined hubs which roll on enduro bearings and are available with either a standard freehub, or an XD driver. All in all a solid package which proved it’s worth during our time spent on it. No corners cut, and 1650 grams for a set. 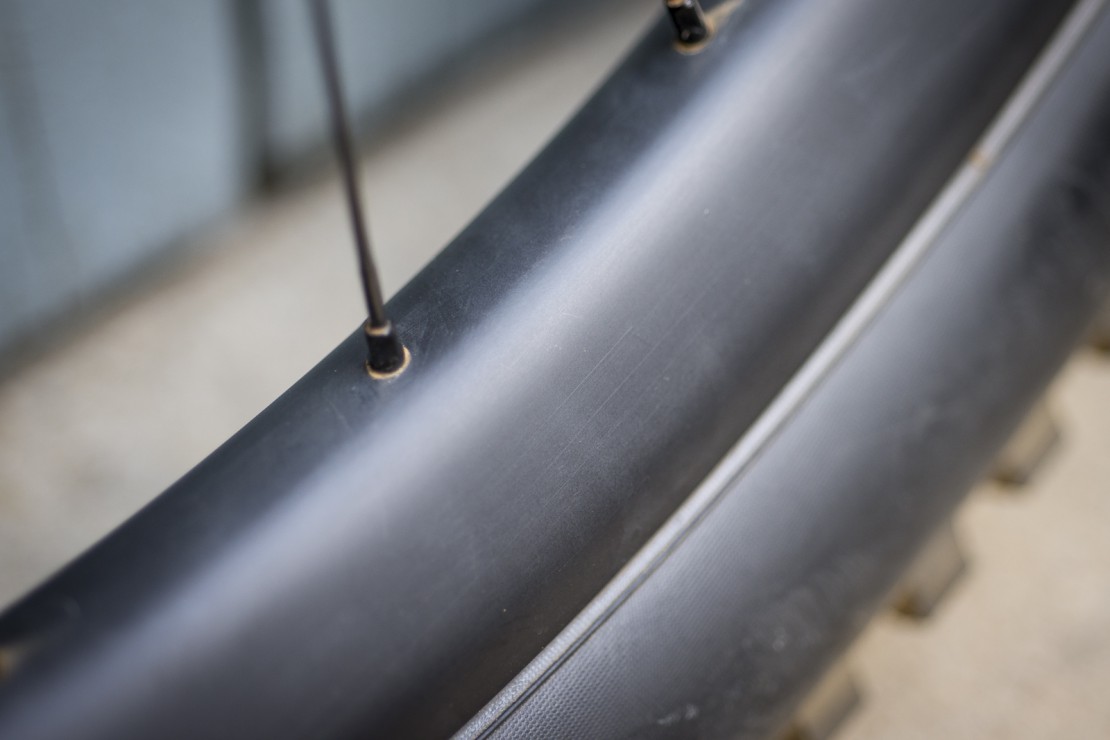 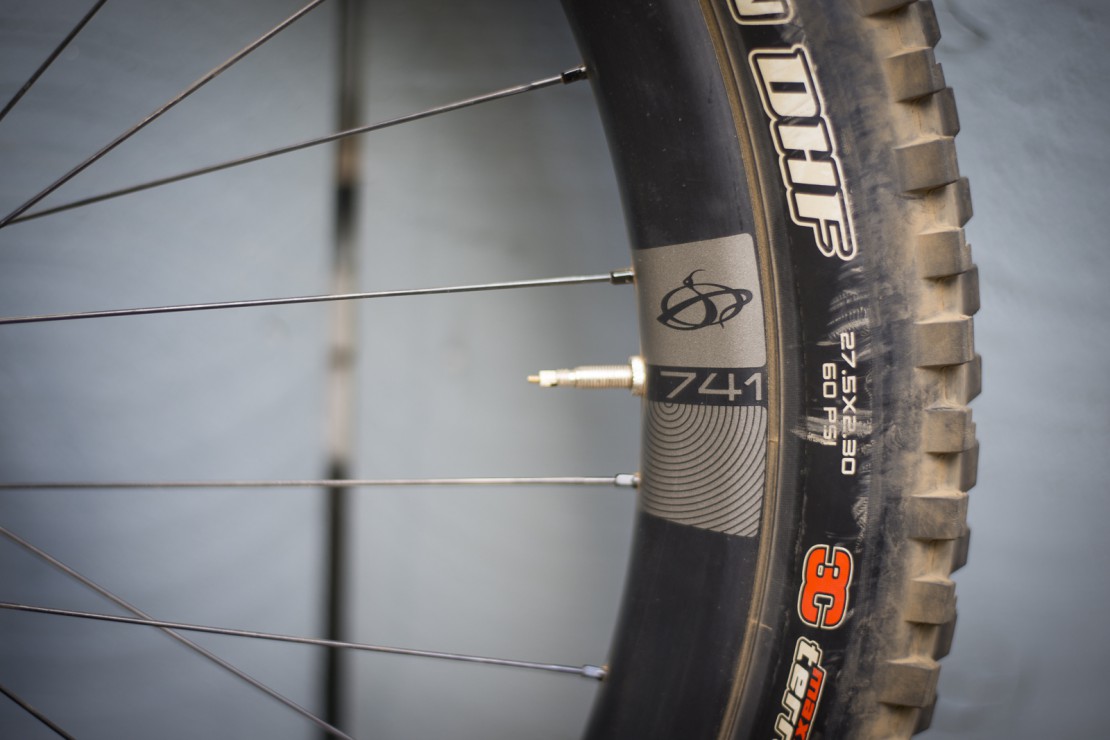 So why the wide rims? If you haven’t read into this, the bottom line is that wider rims allow for hookless beads on the rims. This allows for a much thicker, reinforced bead. This is advantageous because the number one killer of carbon rims is heavy impacts as the tire bottoms out and rocks strike the edge of the rim. This is a drag considering how expensive carbon rims are. Another case for wider rims is that they fully change the ride characteristics of the tire and rim and give the tire a much less squirmy, more predictable feel – especially in rough terrain and punchy turns. Because of the less bulbous and more square shaped profile the tire takes on when mounted it’s harder to roll it over while riding. After bouncing and bashing around on a handful of So Cal trails littered with rocks we’re back to report our findings. 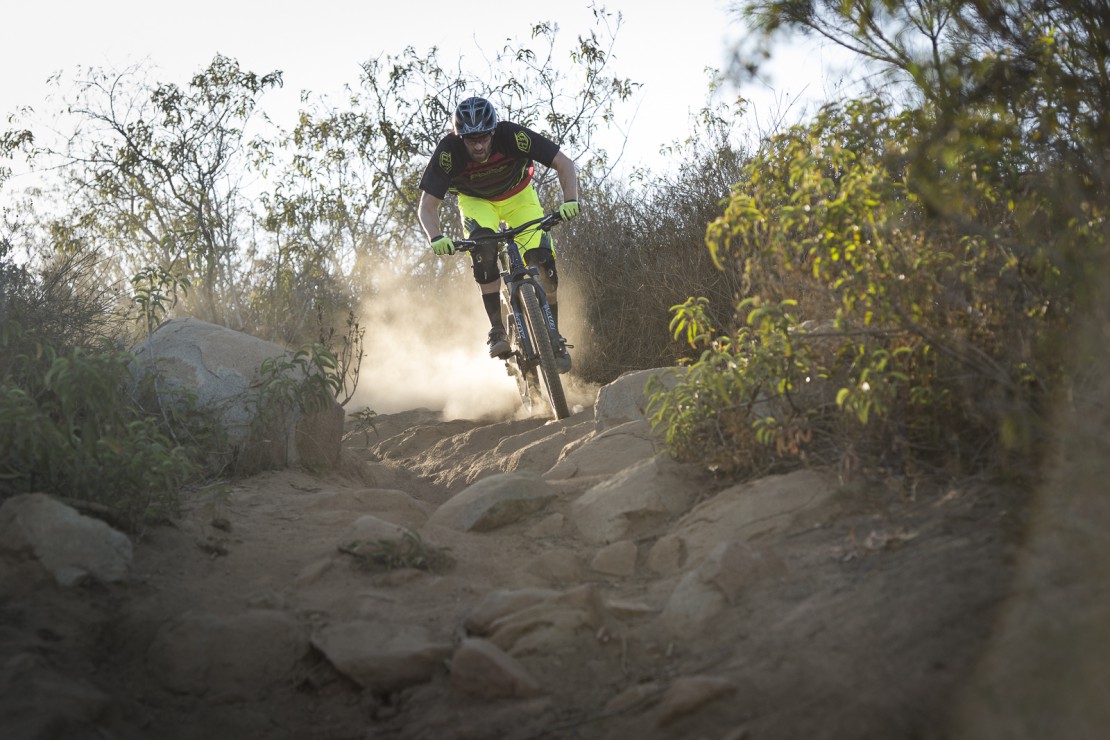 Ibis recommends setting tires up on the 741’s about 4-6 PSI lighter than normal. We did exactly that. Our 175 pound test rider typically runs 28PSI front and 30PSI rear with 2.35” 27.5” tires. He set up the 2.3” Maxxis Minion DHF that came with the wheels at 22PSI front and 24psi rear. We had no issues with pinch flats even at much lower pressure and even under some seriously hard square edge hits we didn’t have an rim damage. 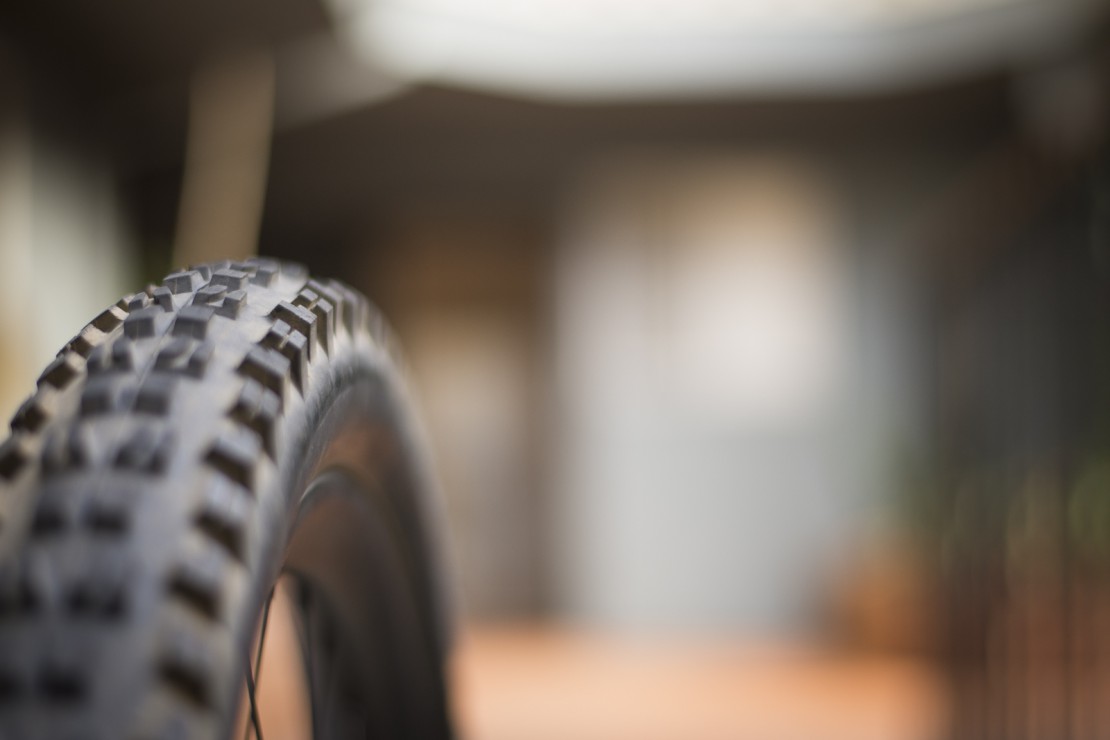 As the tire takes on a bit more of a square profile, it does have a bit of an increase in the contact patch, thus increasing drag slightly – this was a minor hindrance on the climbs, but there are tons of tire choices out there, many of which roll a bit faster than the tires provided. On the positive side – once pointed downhill, the tires provided an incredible amount of grip and stability. They also seemed to add an additional buffer between the bike and the ground. It almost felt as if our suspension had improved. To our delight, the increased traction was most noticeable where it was most critical. Loose rough turns, chunder and duff alike all became less threatening and more predictable. The bike held a line better in off camber bits.

Even at the lower pressures, the cornering performance was amazing.  Square edged and punchy turns didn’t cause the tire to squirm or roll, and the wheels felt far more snappy and alive than a traditional wheelset.  Part of this can be attributed to the stiffness of the rim, but we also felt that Ibis is onto something here and that the wide rim and tire profile does handle corners significantly better than a narrow rim. Braking was slightly improved, although that wasn’t the the most notable attribute. The overall rolling resistance increased slightly, but on the flip side the tires made technical climbing a bit smoother and gave our tester an increased level of traction in the rough bits. 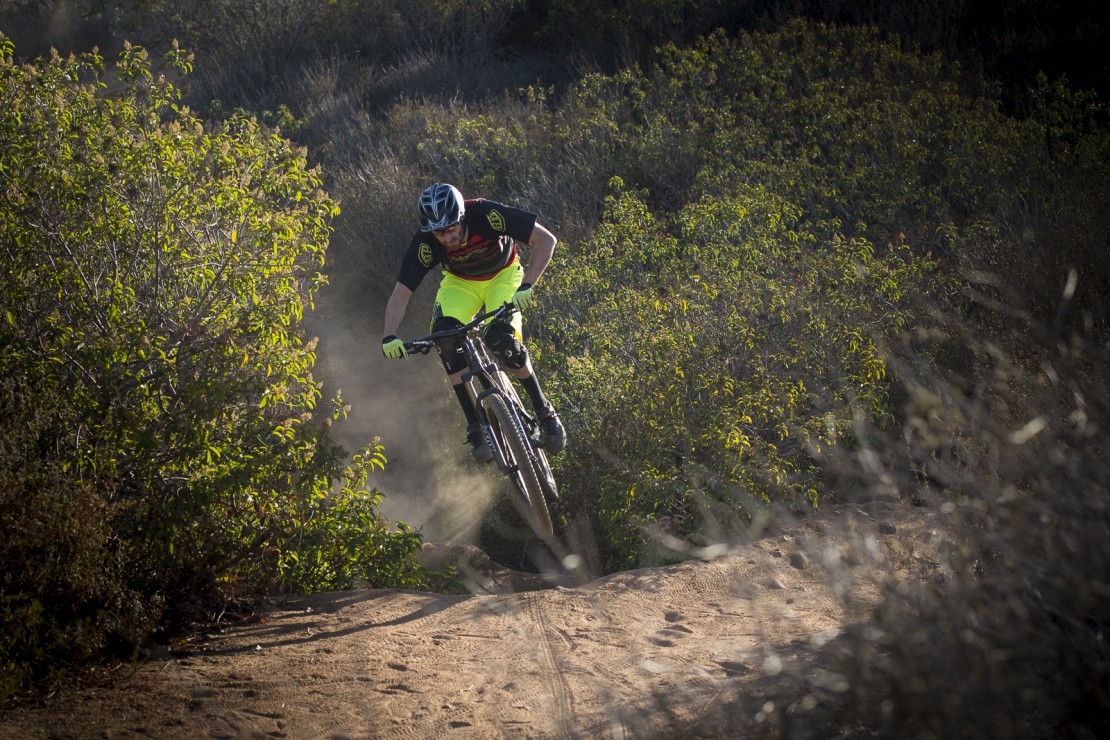 So what are our thoughts overall? As the trail segment has shifted over to larger wheel diameters a stiff snappy wheel becomes far more advantageous. As wheel diameter increases so do the benefits of having a stiff, snappy set of rims. There are a handful of practical riders who don’t lust after carbon simply to save weight these days. The bigger factor is the improved handling characteristics. 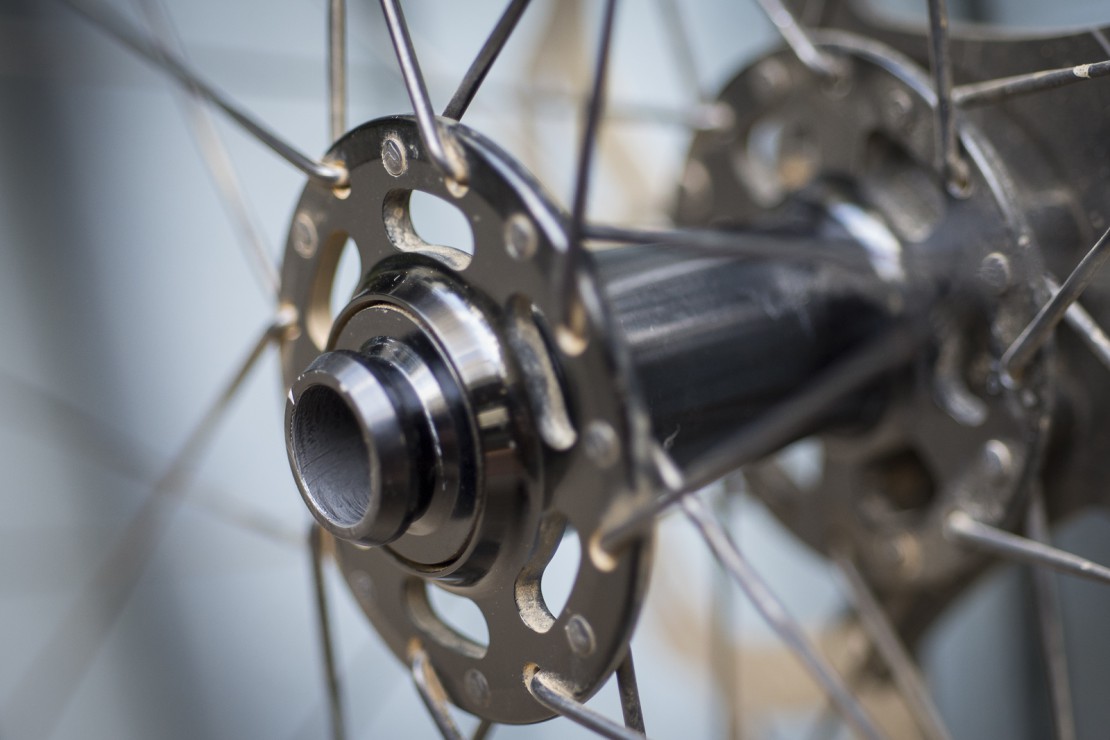 As far as the quality is concerned, we have nothing negative to report. The spokes were tough enough and enduro bearings are in it for the long haul. Ibis spec’d hubs from a high end shop in Taiwan custom made to their specs. These aren’t boutique hubs, but they get the job done. After all, it’s the rims you’re paying for. Also when you consider that this complete wheelset rings in at about half the price of most offerings while offering some unique technology, these are well priced. 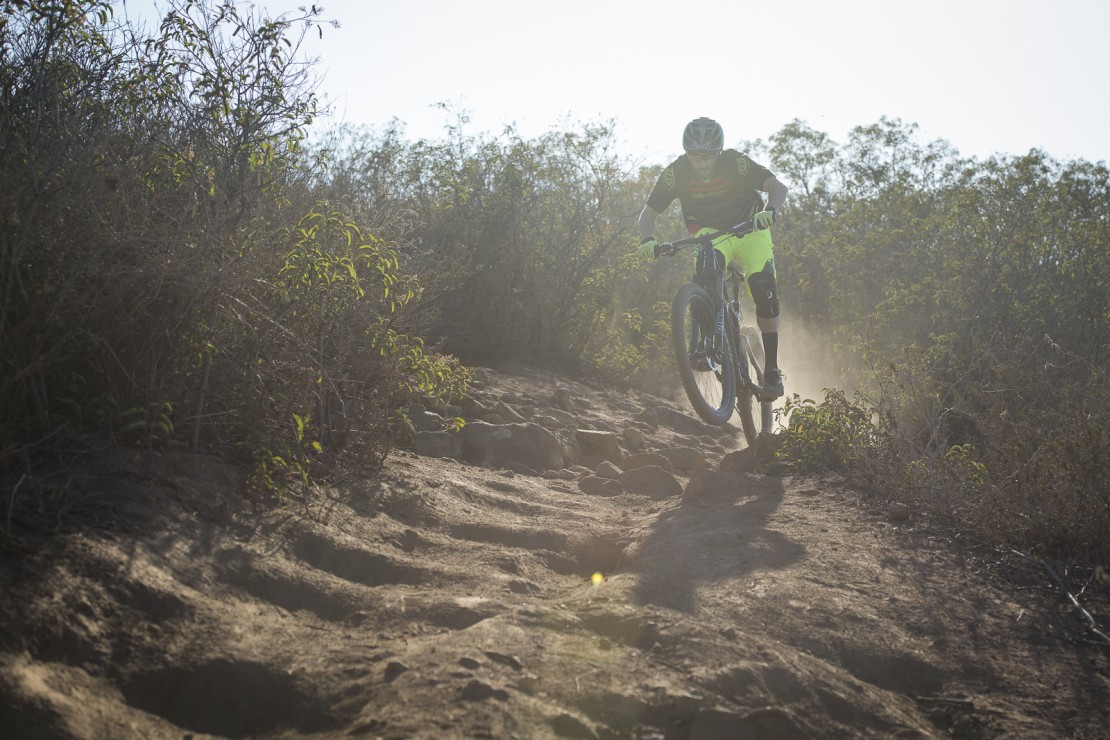 It was a wash in terms of efficiency on flat and uphill terrain. Technical climbs go easier but along with a touch more drag. Suffice to say, we also tested the 741’s with some pretty meaty tires. There are plenty of options these days. The bottom line is that this wheelset totally transformed our bike on the descents. They are the most confidence inspiring set of wheels we’ve ridden to date.