Short days with good weather means just one thing: night sessions! Lupine sent us one of their most powerful lights, the Wilma R7, with 3200 lumens, to be tested out in the darkest part of the season. 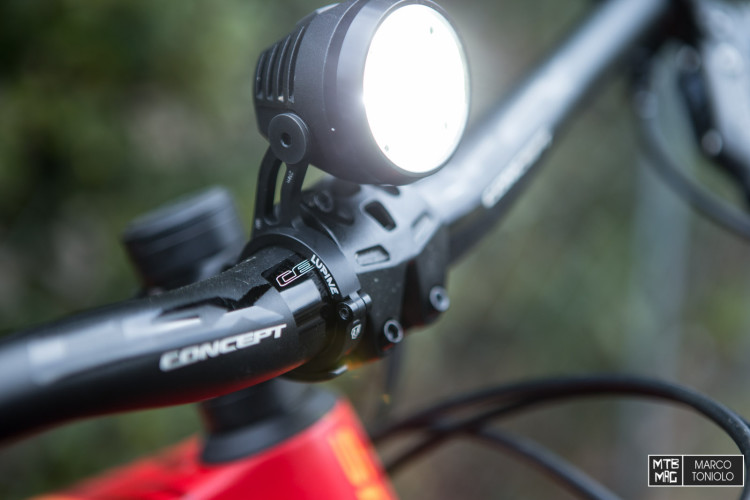 The technical details of the Wilma seem to come from a German engineer’s dream and the light is indeed made in Germany. It is so well finished that, to the most careful readers of MTB MAG, it could bring to mind the extreme attention to details of another German brand: Liteville.

Sorry for such a long introduction, but it helps to frame the price of this light and the differences with cheaper products.

Let’s take a look at the characteristics of the light, tested in compliance with FL1 Standards, established by ANSI (American National Standards Institute) and NEMA (National Electrical Manufacturers Association). The beam distance, at maximum power, is 325m and its peak intensity is really high, as noticeable from the picture below. Furthermore, the Wilma is waterproof and impact resistant as the body is made of 6061-T6 CNC machined aluminum.

At the core of this system are four Cree XM-L2 U4 LEDs, with 10 different brightness levels, from 45 lumens to 3200 at maximum power. Apart from the solid lighting mode, Lupine offers a lighting morse code SOS that keeps going until the battery completely dies to help locating the user. The battery charge status indicator has been carefully designed. There are LEDs on the battery itself and also a button, located on the head of the lamp, which changes color from blue to red according to the battery level. When the battery is empty, there’s an emergency battery available that enables the light to work in the less bright mode.

On the head of the lamp there are also 5 LEDs indicating the power. You can set 4 levels, manually or using an app, and switch to one or the other in sequence by pressing the central pushbutton or the Bluetooth handlebar mounted remote. The latter is powered by a 2032 battery. The helmet and handlebar mounts are crafted with extreme care. These CNC machined aluminum mounts are screwed to one or both sides of the lamp (the hex-key is provided) and then fixed on the helmet with a Velcro strap… … or a GoPro adapter… 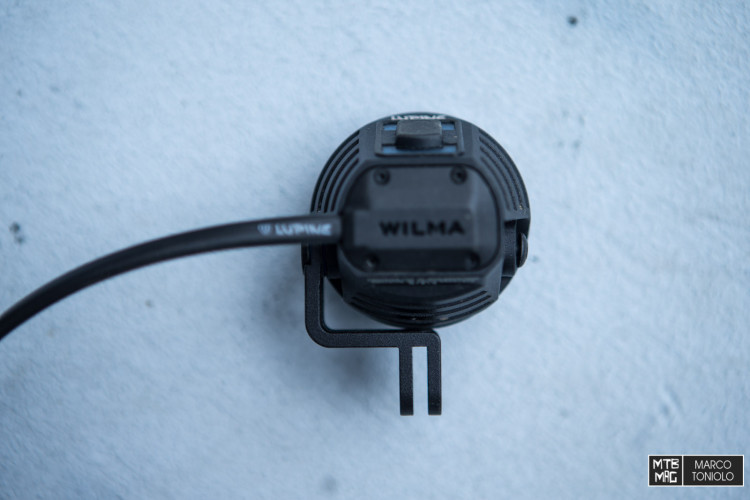 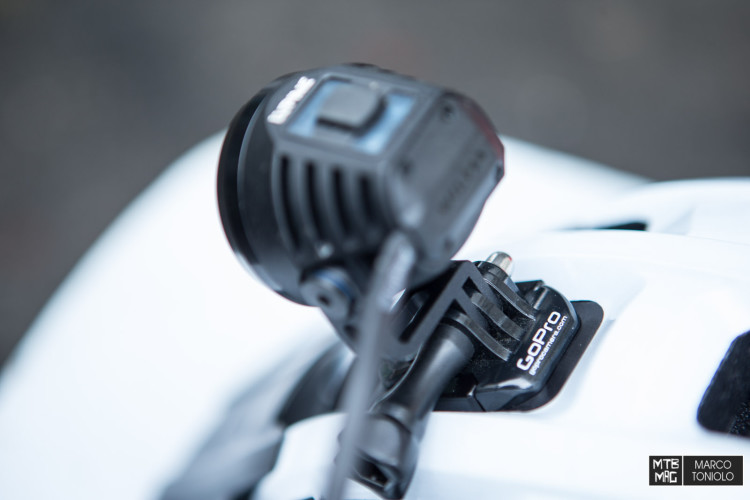 … or on the handlebar with a quick-release mount. This is also available for 35mm bars. 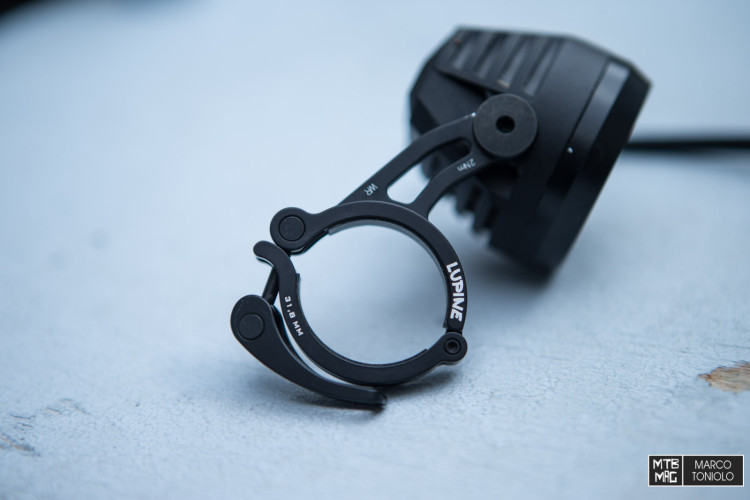 A SmartCore 6.6 Ah battery is included. A slight pressure on the on/off button lights the LEDs which show the charge left in increments of 10%. The same LEDs also work as a rear light if the battery is placed, for example, on the seat post. The LEDs can be set to work in flashing mode.

The battery can be fixed to the frame with the Velcro strap provided with the light, or put into a backpack. In the latter case, the provided extension cable must be used. 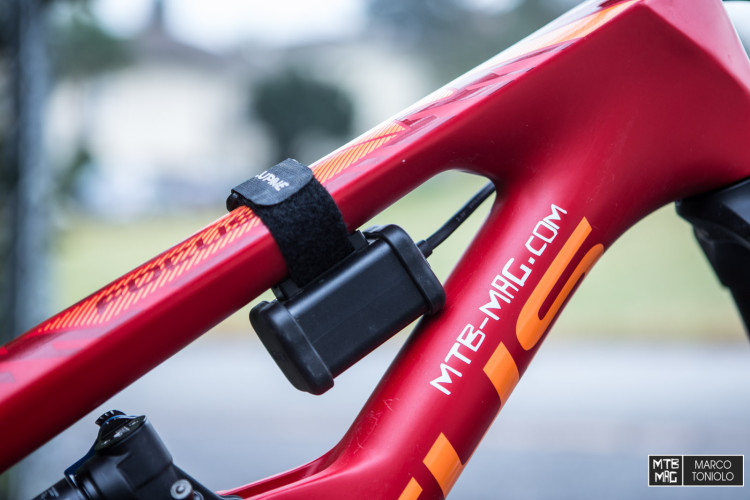 Cable connectors are solid and have a thick rubber protection to work well even in wet and cold (up to -25°) conditions. The mounts are the same for all Lupine products, this enables use of the mega 13.2 Ah battery for extra long rides.

The duration is different according to the power level set when in use. The chart above is really accurate and the values we measured were approximately the same. Brightness levels can be set manually or, more easily, using the free Lupine smartphone App, that shows also the lamp status when in use. 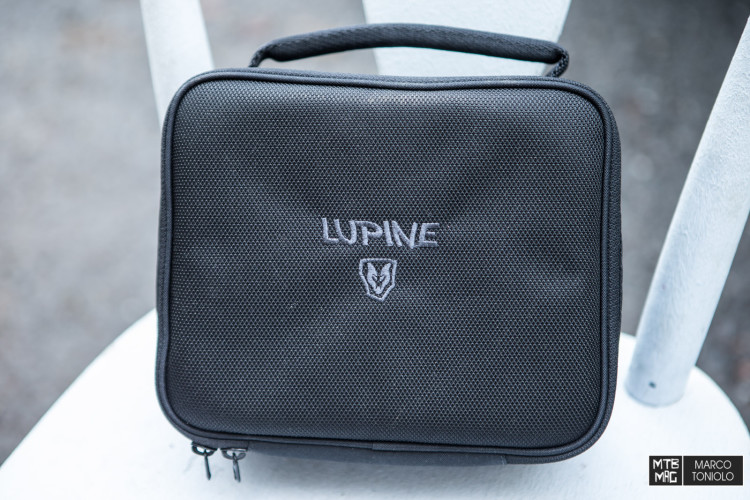 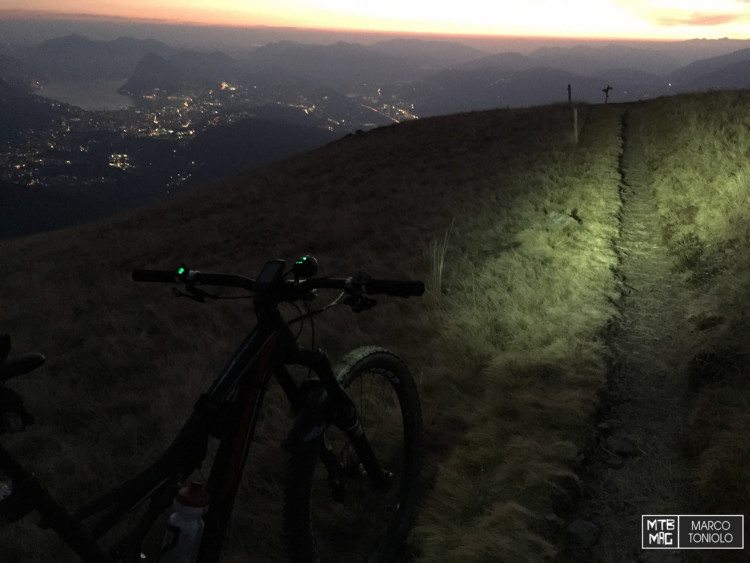 Riding at night is a pleasure with such a light. Weighing only 124 grams, it is extremely comfortable when used with the helmet mount, even on long rides. Best of all, however, is its ability to bring daylight into densely wooded trails.

In full power mode, ideal for singletrack descents, the light beam is white and cylindrical, and consequently not very wide, but so powerful that riding at high speed is not a problem. Below you can see the brightness of the three presets. For the record, right in front of the bike there’s a trench and then a climb. 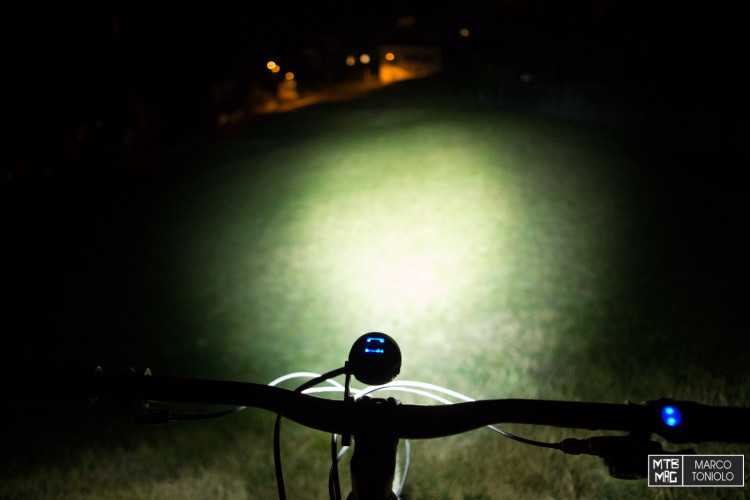 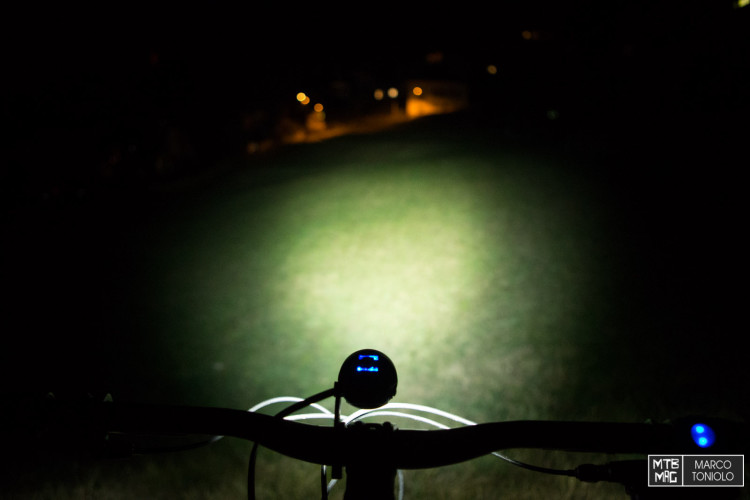 The battery has been used also in snowy conditions, at around zero degrees, and no traceable capacity loss was noticed. Regarding the duration, the light passed the test successfully, considering the alpine trails we ride. The 225 Lumens mode is perfect for climbing (estimated duration: 31 hours), On descents, unfortunately shorter than the climbs, most of the times we used the 3200 lumen mode.

Working with 3200 Lumens, the lamp gets really hot, but this had not been a concern during the test carried out in wintertime, in summer though, with warm temperatures, this can lead to an automatic reduction of power to avoid overheating. Most rides can be done at 1800 lumens, so the problem is mainly theoretical, considering the 10 different brightness levels available.

The Wilma helmet mount is rather high, so heat is not an issue with the helmet. Helmet and bar mounts work really well since they allow adjustment of the lamp angle with just a light pressure of the hand. The same can be said about battery securing system. None of the two units ever moved, despite the various rough singletracks we rode during the test. The Bluetooth remote is the most comfortable tool, it allows to keep both hands on the bar to switch the light on and off or to set the power. If you try it once, you won’t ride without it anymore, especially with the light fixed on the helmet. The button is pretty big, easy-to-use even wearing gloves, and the blue light makes it clearly visible even in the complete dark. It is important to underline that, due to its light beam and the lack of a dimmed mode, the Wilma is not made to ride in the traffic. This is quite the same for almost all head/mtb lights.

Quality is not free. The Lupine Wilma R7 keeps its word: Extreme brightness combined with a long-lasting battery, reliability and excellent construction. The Bluetooth remote is the icing on the cake. There is no way that any made-in-China light can rival this product, even though on paper a lot of lights seem to have the same performance. If you like to ride offroad when it’s dark, and you do it often, the Wilma is worth buying.