For nearly two months I have been riding the new generation of Fox Suspension products on my trailbike, a Santacruz 5010 with 125mm rear travel: the all new 34 Float Factory fork and the Float DPS Evol Factory rear shock. Today Fox released them to the world, and at MTB MAG we’re ready to share our impressions after many days of riding these new bits. 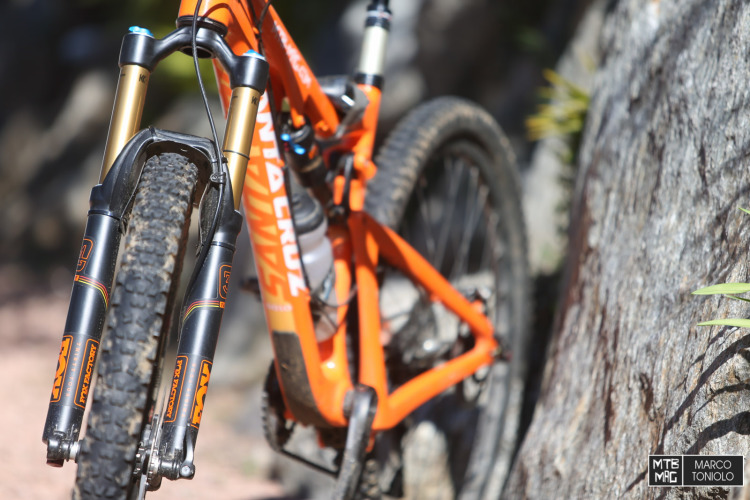 Last year Fox launched their Enduro fork, the 36, but still had to face the hard competition from the Rock Shox Pike in the Trail/All Mountain segment. Until now. The new 34 shares only the name with its predecessor: the chassis and the hydraulic parts are new and vastly different from the past versions. It will be available for 27.5″ and 29″ wheels, with a travel range between 120 and 160mm.  The one we tested is a 27.5″ with 150mm travel. 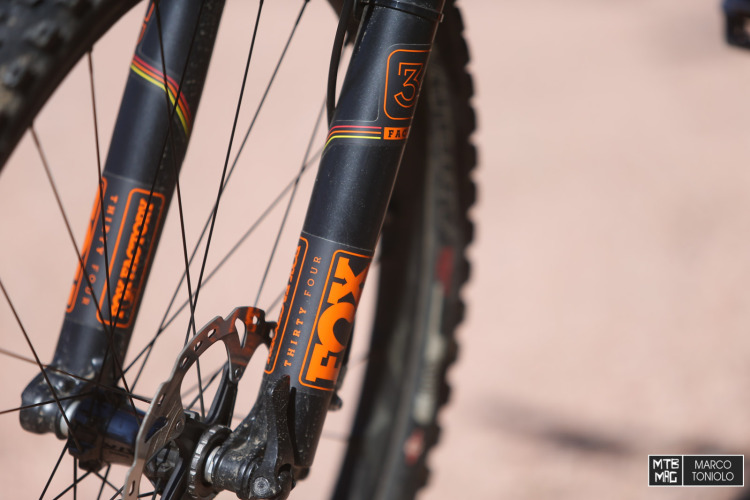 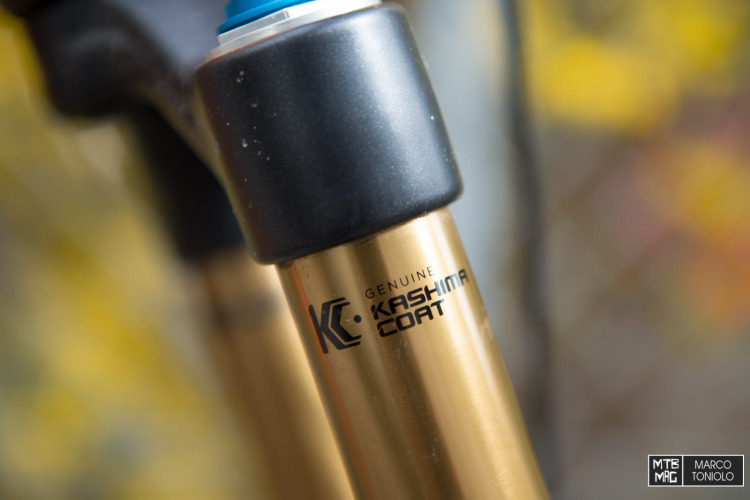 The new 34 features the 4th Fit cartridge generation, with a wider shaft (10mm) for a better oil flow and a  dual circuit rebound for a quicker recovery from successive impacts. From 2016 on, Fox will only offer forks with the Fit sealed cartridge, and the Evolution line will not be produced anymore. 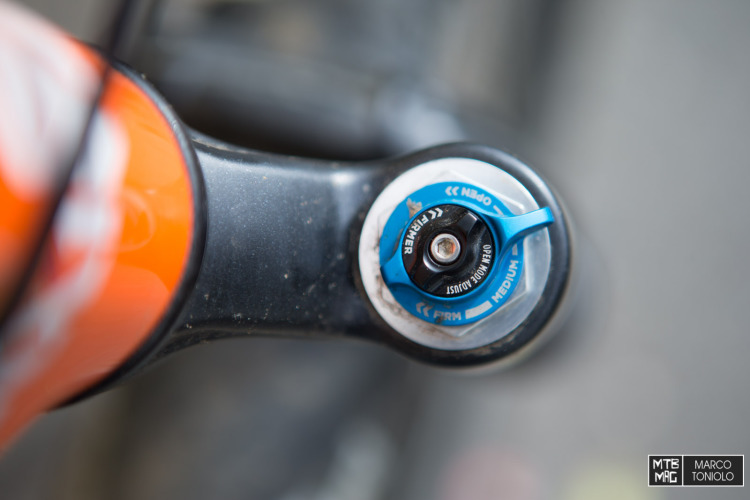 On the right side, we find the lever that regulates the compression. There is no CTD anymore, instead Fox calls the three positions simply “Open, Medium, Firm”, where firm means lock out. The black knob in the middle is for the low speed compression: 22 clicks allow the rider to fine tune the Open position. 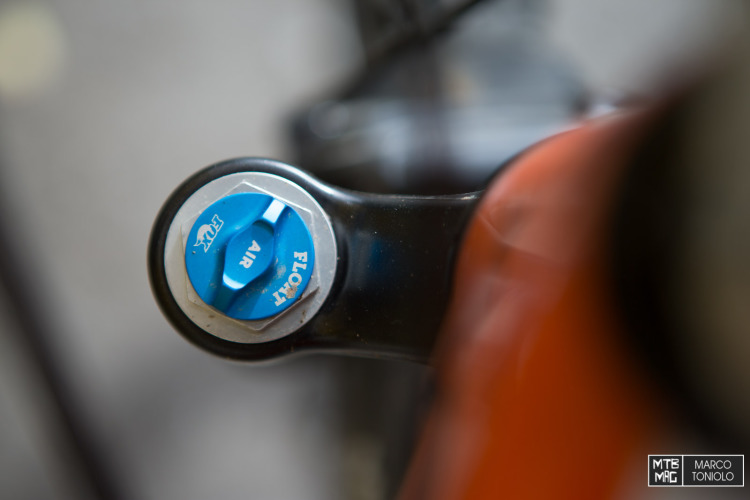 Also the air spring is new, with a self equalizing system between the negative and the positive chambers, for less friction and smoother performance. It’s also 125grams lighter than the predecessor.

Upon unscrewing the air valve cap it’s possible to tune the progression curve of the fork by adding or taking off one or more of the yellow spacers you see in the photos. Forget getting messy with the oil. Here it is how it’s done.

In the fork we tested there were already 2 spacers and I liked the progression curve, so I didn’t add or took away any. Its nice to have the option though. 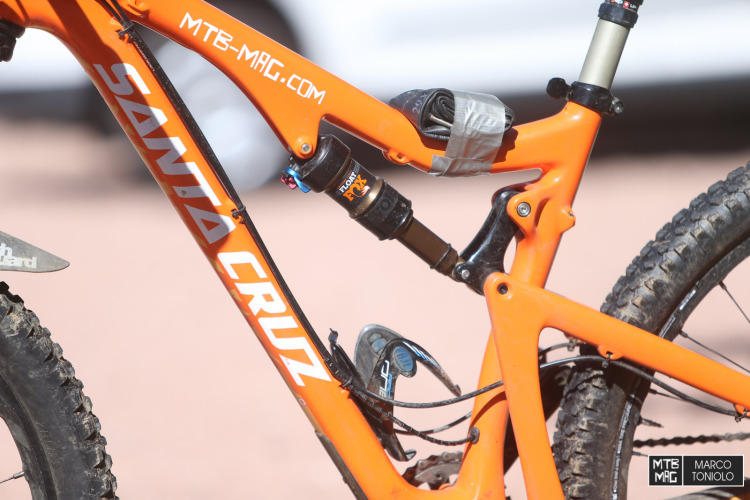 Also the Float shock has been completely revisited and it now has a bigger negative chamber and a new lockout system. Like the 34, this shock is also aimed at trail riders. The one we tested is a 200x51mm and its weight is exactly 300 grams with hardware. 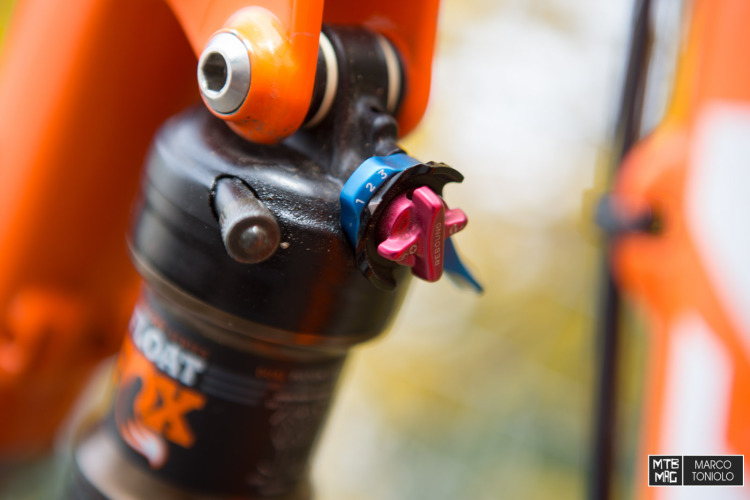 The three lever positions aren’t called CTD anymore but, as on the 34 fork, simply Open, Medium and Firm, and on the shock as well you’ll find low speed compression fine tuning in the Open mode, adjustable by the small black lever in three positions. The red knob is the rebound. 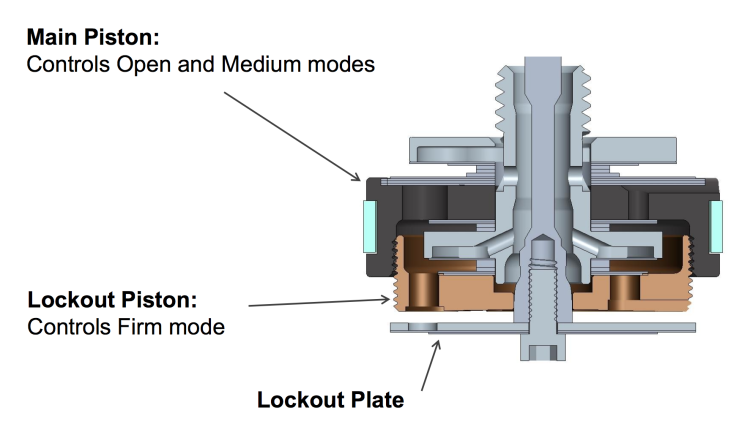 As said before, the internals have changed: DPS stands for Double Piston System, a mechanism that regulates the oil flow in the Open and Medium modes, and the lockout in the Firm mode, as shown in the image above. This implies that in the Firm mode the shock is nearly locked out, and the bike very stable on long and easy alpine climbs on gravel or asphalt. 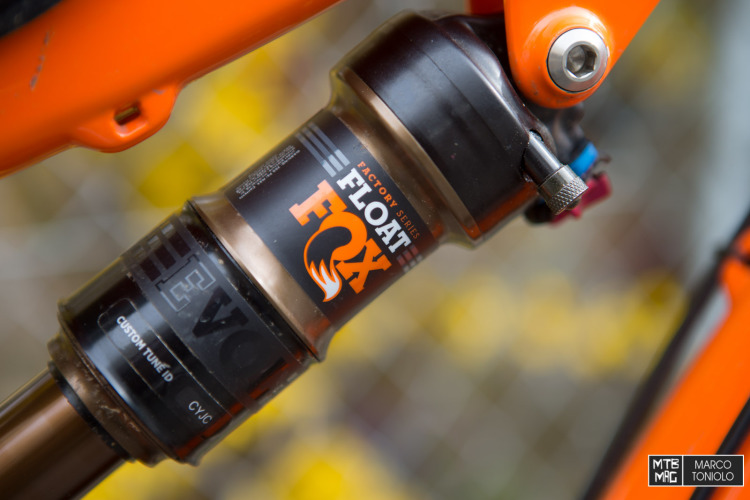 The big negative chamber reminds of the Rock Shox Debonair, and it works the same way: more volume means more sensitivity at the beginning of the travel and a more linear damping curve. No more Boost Valve. Fox credits this to the continuous improvement in frame kinematics, noting that the range of tuning needed by the bike brands has decreased over the years. The good thing about this is that now it has been possible to offer a proper lock out, which was impossible via the Boost Valve. 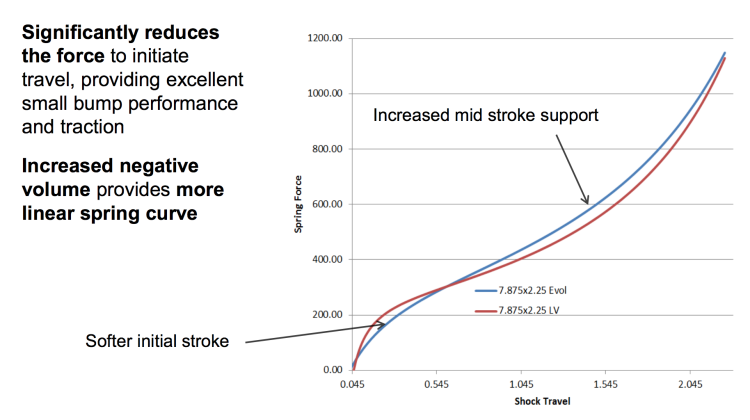 In the image above you can see the spring curve, tunable with the same spacers as the old Foat shock. 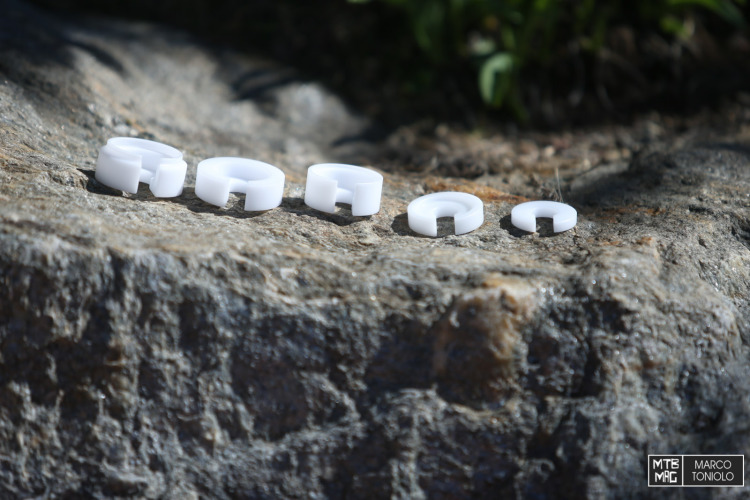 One important thing to remember when setting up your Fox shock is that it’s necessary to balance the positive and negative chamber inflating the shock to 100 PSI and gently pushing it a couple of time, letting the air flow between the chambers.  The same thing applies to the Float X. During normal riding it takes much longer to the air to balance, because the transfer window is too short to let the air go from one chamber to the other. 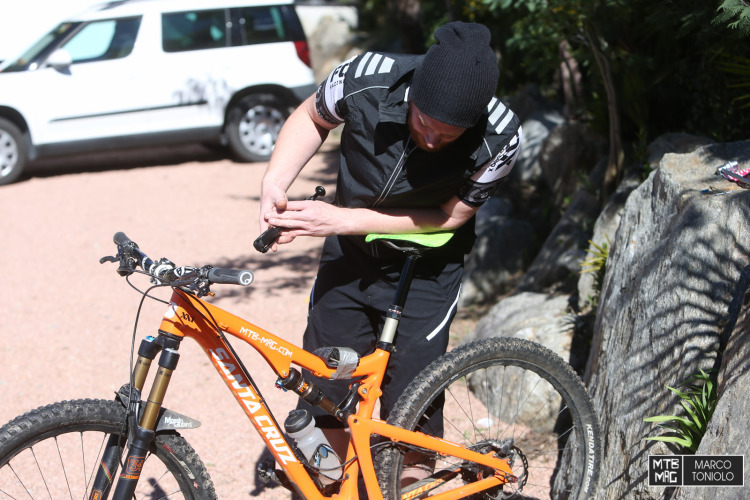 First off: I was blown away by the performance of the Float PDS rear shock. The 5010 suspension started to shine and became super sensitive to small bumps and much more lively compared to the old Float CTD. It’s really fun hitting obstacles with this trail bike and it has never been so easy to bunny hop the bike. On the downhills, the rear wheel sticks to the ground. You know the smooth sound of a DH bike hitting small bumps or rocks in a quick sequence? Exactly what happened to the 5010, transforming its behavior completely.

The Firm position is a real lock out, and turning the lever to the Medium position you can definitely feel the oil starting flowing. The fine tuning in the Open required some riding time before I could tell the difference between the three positions, but after some rides on my testing trail I started to like the way this fine tuning mates to the one on the fork (the one with the 22 clicks). I found the right balance having the compression in the same kind of setting front and rear: the bike paired the travel of both units brilliantly, feeling well balanced. Sure, personal taste and bike kinematics play a role in this set up, but using the available travel well is a sign of a good set up.

In the past I have been riding the Rock Shox Debonair specifically tuned for this bike. Compared to the Float DPS it felt less sensitive to small bumps in sequence and it went more easily through the sag, directly to the mid travel, enhancing the VPP weak point: being a little bit saggy if the chain pull isn’t constant and firm. 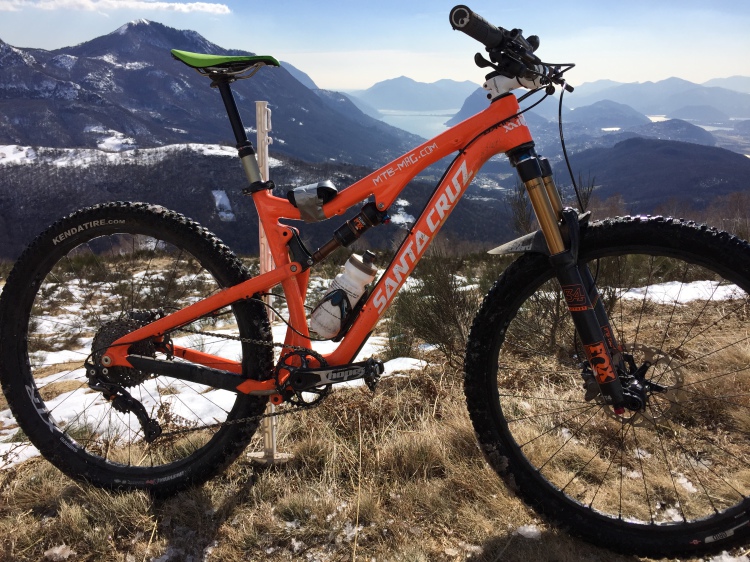 In regards to the 34, I can say this fork has nothing to do with the old one. It’s lighter, its small bump sensitivity is great, and it’s lively as hell, the same way the Float DPS shock is. I liked its more linear spring curve, and at the end of most rides I found that I have been using most of the travel, the O-ring being close to the bottom out point (this is on the top of the Kashima logo), but I never bottomed out.  In the past it was really hard to find that sweet point between using most of the travel and having the fork sit up in the travel and avoid diving. 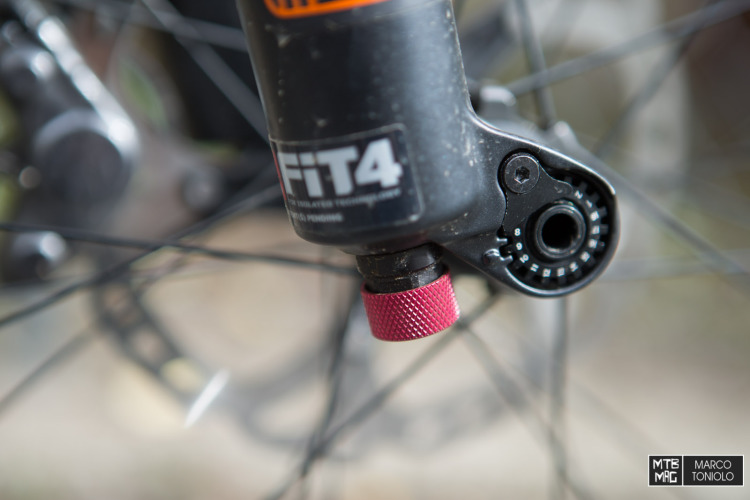 The low speed compression setting has a clear impact on the forks behavior between full open and closed, I preferred to ride it full open because the fork does a good job of staying higher in the travel. It’s good to have if you ride aggressively or in some gnarly trails where you want to have as much feedback from the terrain as possible. 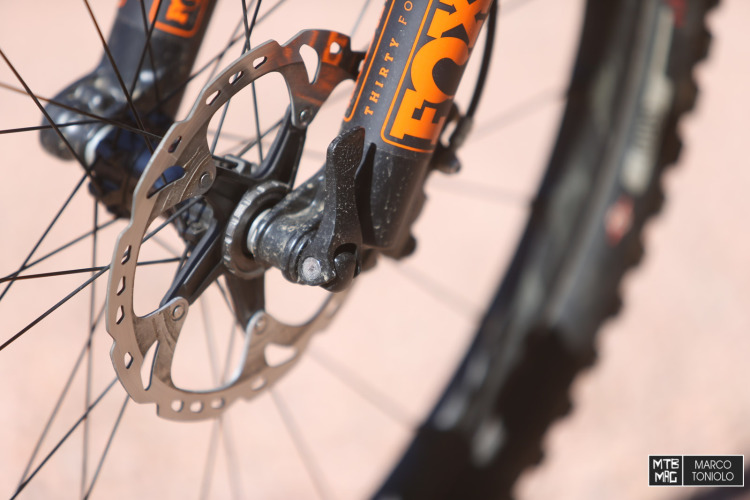 Regarding the loss of weight of the 34: normally this would equate to less stiffness, but let’s be honest. This is a trail fork, and it’s quite hard to judge its stiffness compared to the old one when riding, or even compared to the Pike or the even lighter Formula 35. Bottom line: most of the riders won’t complain about its stiffness, nor do I. If you are charging your trails hard or if you are racing, Fox offers the rock solid 36.

If we take the Rock Shox Pike as the market benchmark: Fox has closed the gap, the 34 is a superb fork and it’s even some grams lighter. Competition is good, and even haters have to admit that having two big brands pushing each other hard is the best thing that could happen in the market. Hopefully more brands will come and follow suit.

The Float DPS shock is probably the best trail rear shock out there. Great sensitivity, very lively and easy to set up. On our Santacruz 5010 it was a huge improvement over its predecessor, the CTD, and I was stoked since the first time I tried it on my home trails.