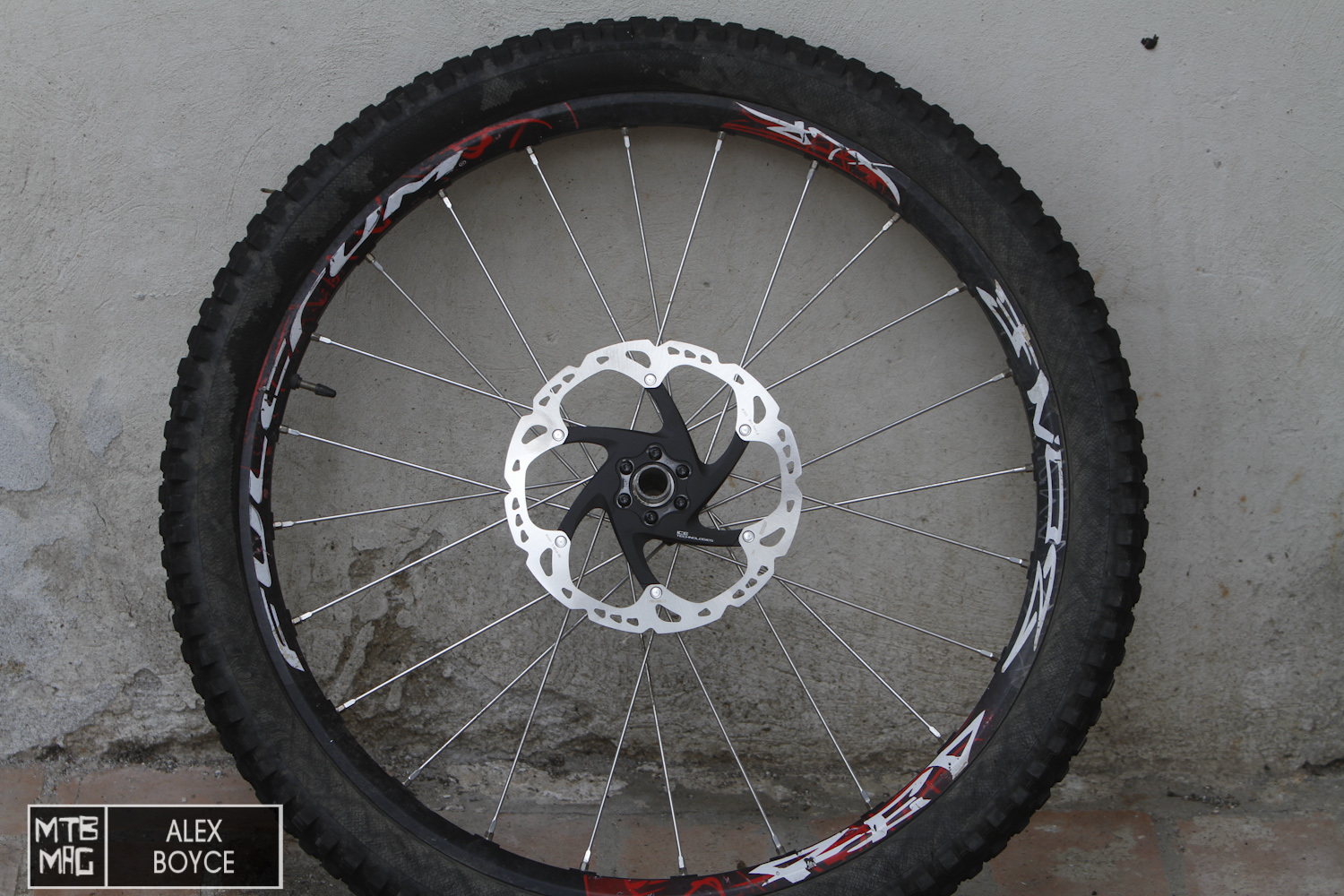 Shimano brakes have become noted for their stopping power and reliability over the last few years. One of the features of Shimano brakes is the ability of some models to be Ice-Tech compatible.

Ice-tech is Shimano’s name for it’s brakes that have extra cooling features built into the brake system. These focus on an aluminium/steel composite vented discs, brake pads with cooling fins and in some cases brake callipers with cooling fins.

The Shimano Zee range of components includes brakes which are Ice-tech compatible, in other words they can be used with Ice-Tech disc rotors and brake pads with cooling fins.

Our aim in this test was to do a number of back to back runs to find out if the Ice-Tech system really works compared to a non Ice-Tech setup and if so what difference it really made in the real world. 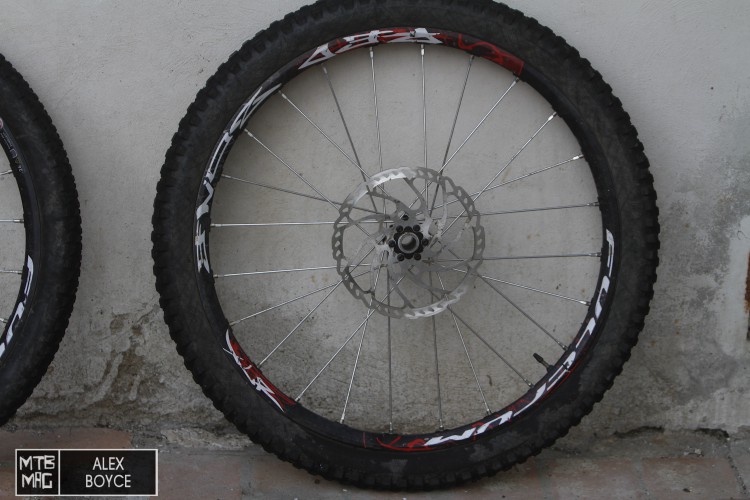 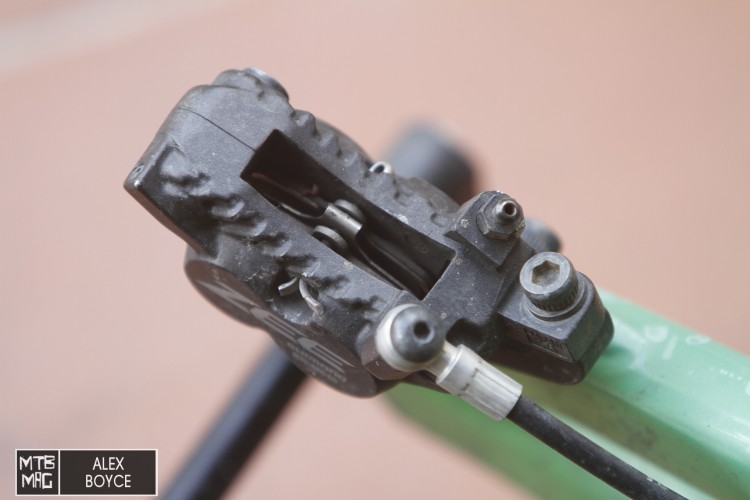 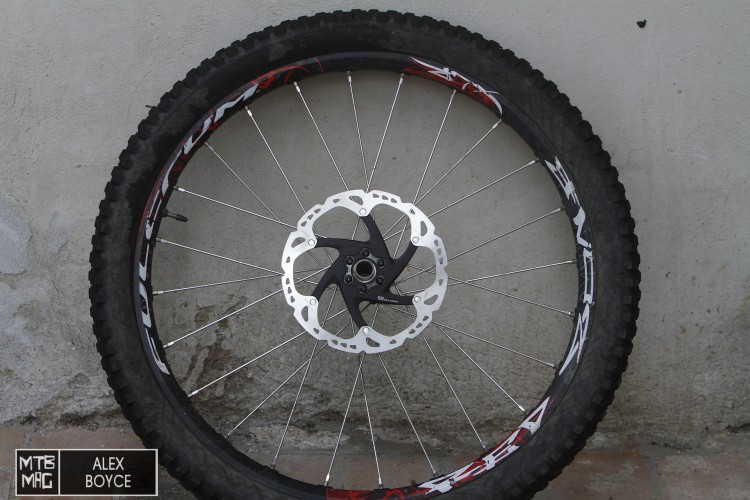 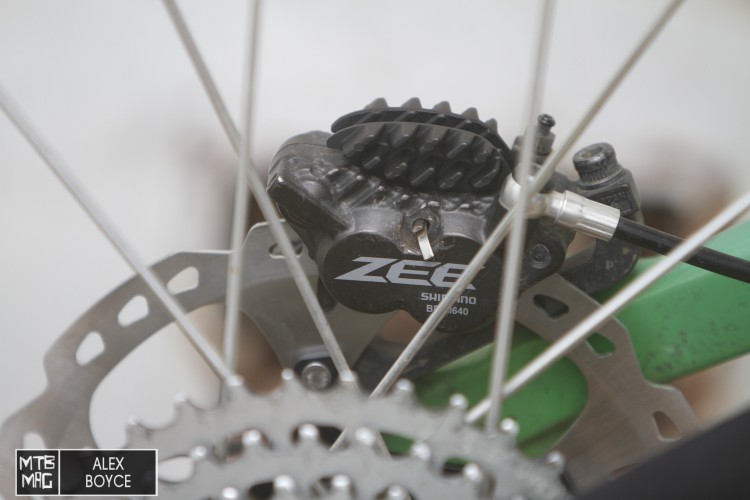 Ice-Tech pads mounted up behind, notice the cooling fins.

For the test runs we were using a 26″ bike with a fairly aggressive set-up. 203mm rotors were mounted on the front and 180mm rotors on the back. First we tested the Ice-Tech set-up then we tested the non Ice-Tech, downhill on a fast 4 km 20 minute trail with some technical, some steep and some flat sections.

The brakes prior to riding were bled and both set-ups were “burned” in, i.e. they were both bedded in. Our brake set-up was Shimano Zee four piston brakes.

We a few runs each time to assess the brakes and then swapped over to the non Ice-Tech brake set-up and repeated.

We did not have a laser temperature reader with us, which would have been useful to understand the numbers behind what we were doing, but as far as we could understand our aim was real world riding not just science. 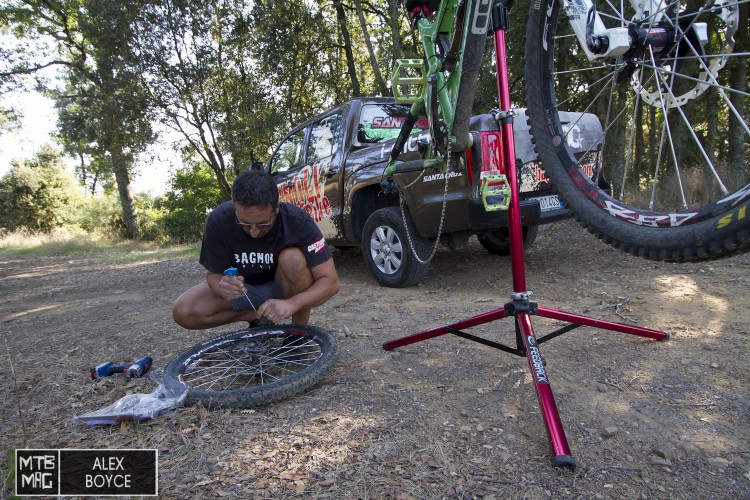 Precise set-up was essential before and after each run. 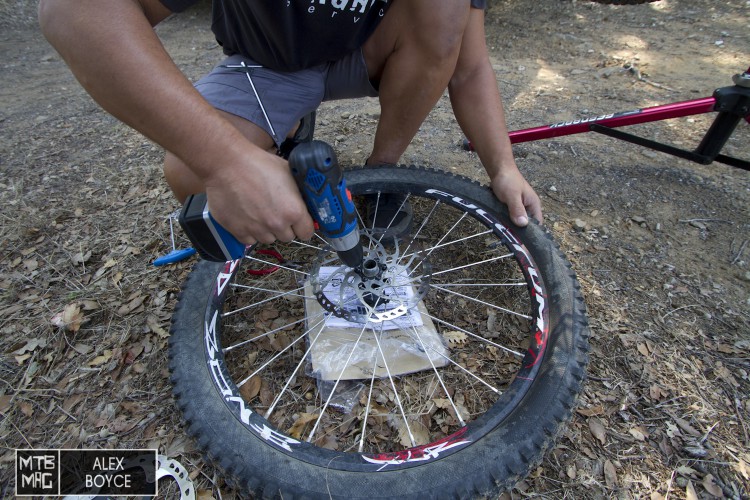 Changing the discs over.

Our test runs were fairly good fun but we tried to be as fair as possible choosing the same line each time down the track and tried to maintain the same speed and braking points throughout the runs. We were looking for as consistent a test as possible. We kept our hands relaxed on the bars and minimised any poor riding technique. 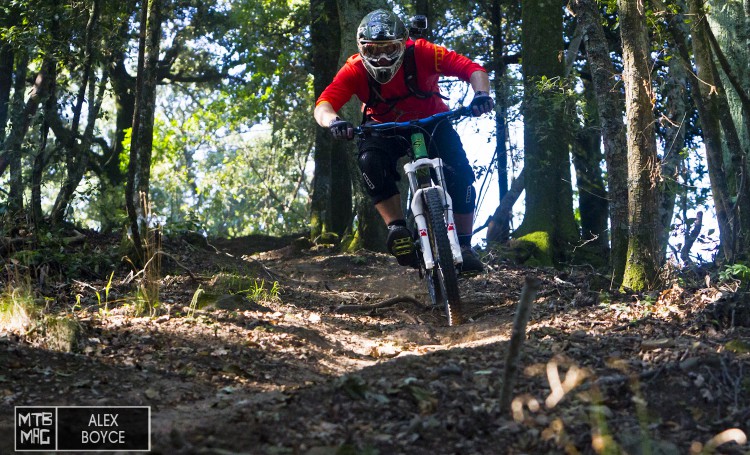 We tried to be as consistent as possible with our braking tests.

Off the top of the trail for the first 500 metres down we got comfortable and started to increase speed and play with the brakes. The first thing we noted was that at the start of the trail with cool brakes both set-ups worked incredibly well, with lots of bite and positive brake feeling coming back through the bar.

In the middle part of the track we started to notice some differences in the way the two set-ups’s performed. Firstly although we felt that power was equal in the handle as the brakes became hotter it was evident the non Ice-Tech variant brake set-up was not the same as the Ice-Tech variant.

These differences came across in a number of ways:-

Consistent bite and precise braking at all times, it felt like you needed to brake less and when you did the reaction of the bike was responding quickly to the lever input, the braking felt like it started from the initial moment the pads came into contact with the disc rotor. As more force to the lever was applied the brakes always performed the same. When in technical sections and reacting to the rocks and terrain, a quick dab on the brakes allowed instant correction of the bike movement.

The bite feeling started to change as the brakes became warmer down the track, they lost the precise immediate grabby feeling much more quickly. Instead the brake lever needed to be squeezed more once the pads had come in contact with the discs to have the same effect. Although the overall power felt similar, in our experience it meant that the rider had to anticipate braking more compared to using the Ice-Tech set-up. We actually felt like we were braking more compared to our previous runs, although we were riding at the same speed on the same lines. When we got into a technical section we found that our braking efforts did not reward us with the same amount of movement correction as with the Ice-Tech components, leading to more mistakes and in our opinion a slower less controlled ride when it got harder or we had to react. Finally lever feeling did change a bit as we descended, with a harder lever and a different pad contact position/feeling at the bar.

When thinking about testing both brakes back to back down the track and then going through all the different things we felt, it was clear that the Ice-Tech set-up gave us a more consistent, more reliable feeling and a better response to immediate braking inputs that facilitated more precise bike control movements.

Although the non Ice-Tech brake set-up functioned extremely well, we just felt we rode better with the Ice-Tech set-up. Some of the killer clues to what we experienced were the facts that after descents on the two set-ups, our hands felt less tired and fatigued when using the Ice-Tech components. The brakes felt more consistent and we felt we rode better as we could control our speed better.

Based on what we experienced we can see why Shimano developed this system. Its basic braking science that we experienced first hand, cooler brakes means better braking, heat build up causes fade and other changes in the system. For a slightly great price of the pads and discs, we think for many riders that the extra cost of the components are worth it, especially if as a rider you are doing long runs and extreme braking, or like to have more control in technical sections, its a highly recommended set-up to have. The Ice-Tech discs we were using were XT. Saint and XTR also have even more cooling fins on the discs themselves, again for extreme long runs or maintaining brake feeling consistency it will give a greater advantage.

We were surprised by the outcome of our test as we are normally quite sceptical about how much better it really can be with more polished components, does it really improve the riding experience? Well in this case yes. At a later date we will be experimenting with other variants of Ice-Tech rotor size, we are particularly interested to see if its possible to use a smaller rotor and save weight. 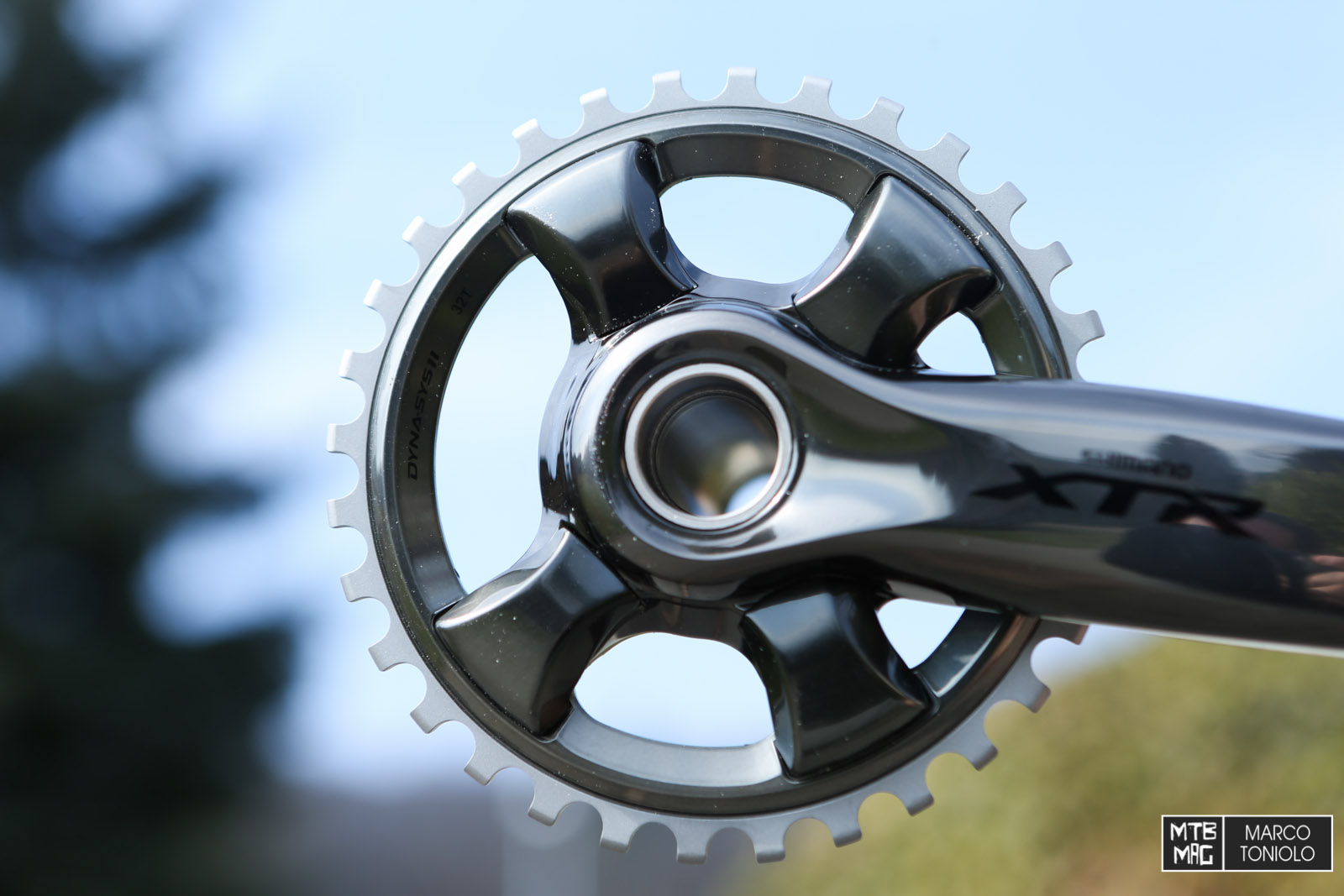 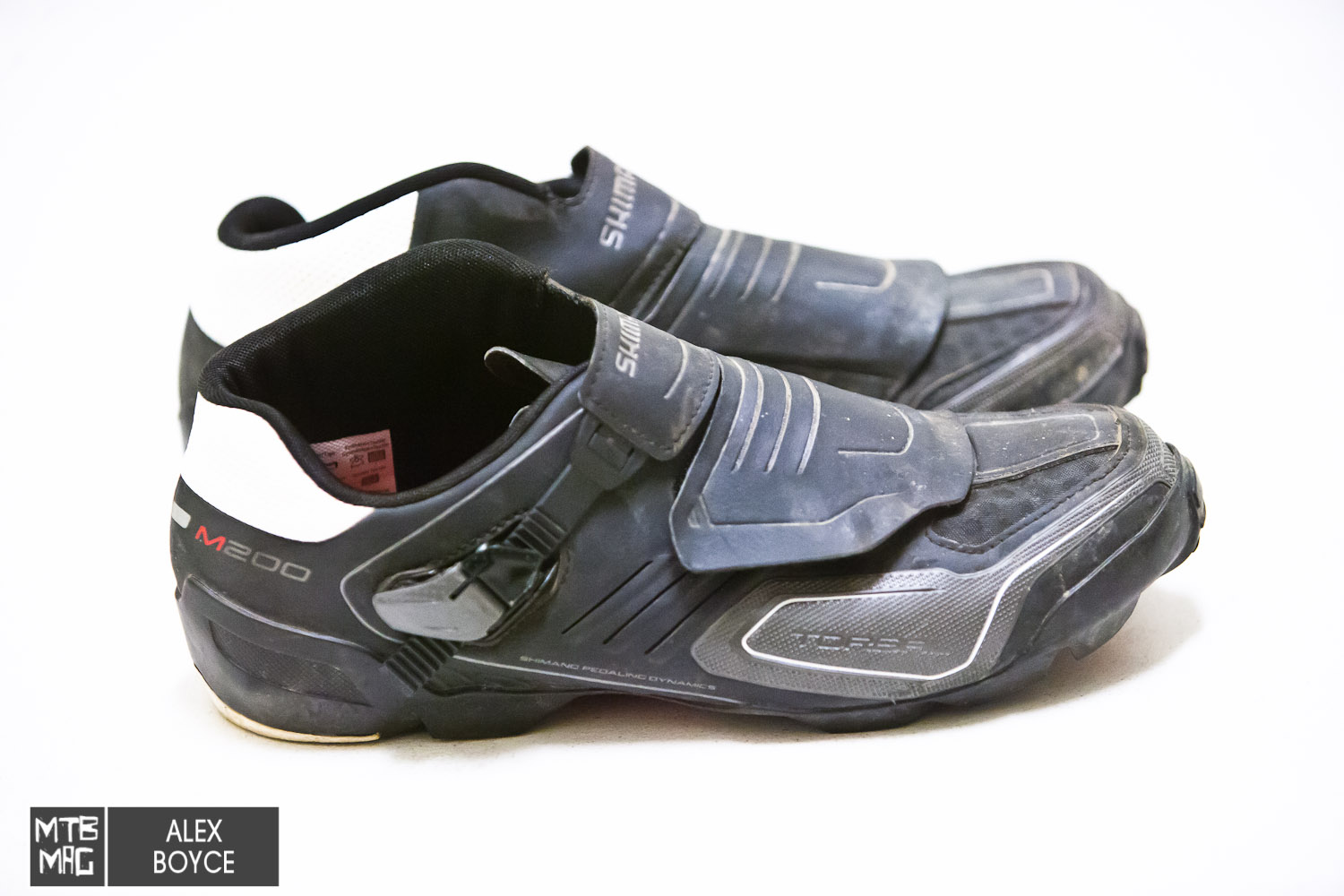 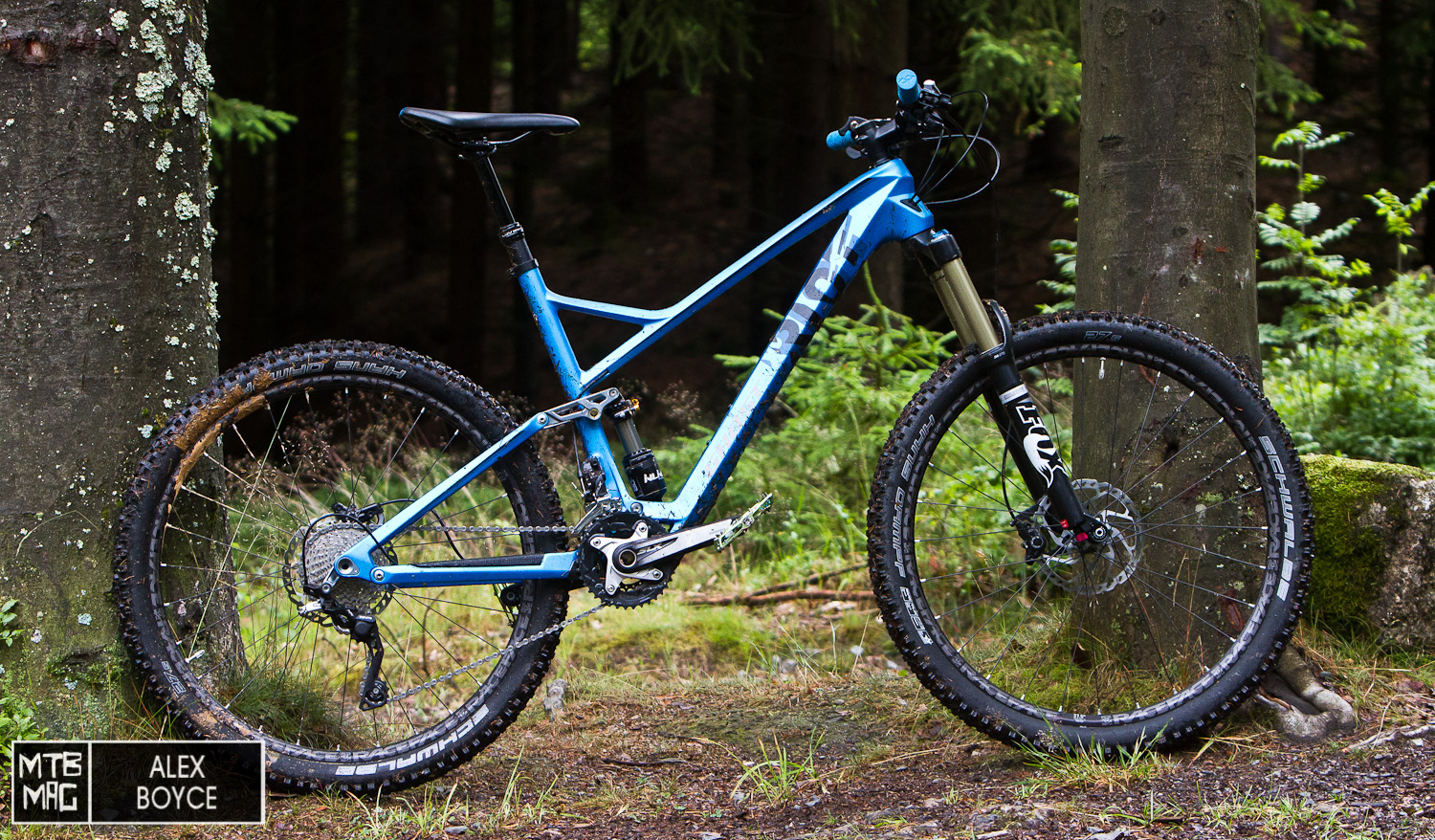