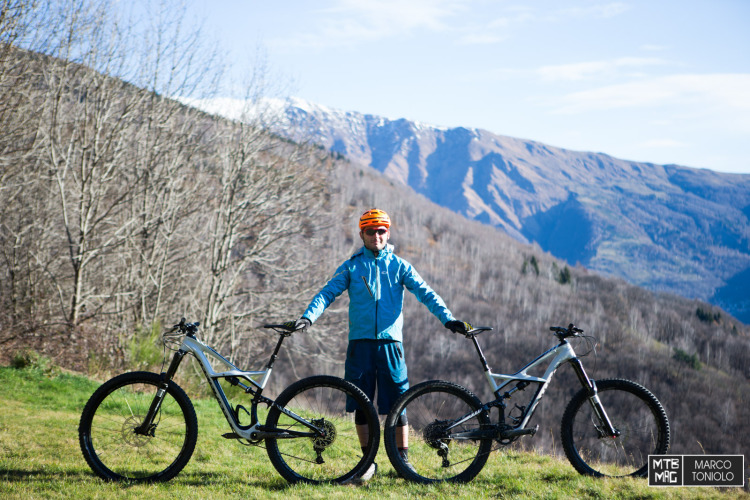 We independently tested the Specialized Enduro Expert Carbon 650b and the Enduro Expert Carbon 29 in the past weeks, now it’s time to compare the two bikes on the field. Specialized Italy provided the Enduros for as much time as we wanted, in order to ride one after the other on our home trails. One of our testers is Marco Milivinti, winner of the 2014 Superenduro Series, to get the “pro” point of view.

Both bikes have a Fact Is-X 11m carbon front triangle and a M5 alloy rear triangle. Both are also size Medium and identically spec’d (relative to the different wheel sizes) the handlebar being the exception: the 650b has a higher rise. The build is the same you can find in the shops and on the Specialized Website. 650b | 29.

If the builds are the same, the real differences can be found in the geometries. Our bikes are medium sizes.

The first thing you can notice is the chainstay length: the 650b is just 8mm shorter, and the wheelbase is the same, which is a pretty short bike for being an 29″ enduro bike. Seat angle and BB height are about the same, the real difference is in the head tube angle: 65.5° vs. 67.5°, two numbers that cannot be compared without noting that the 29er does not need a slack angle to become stable at speed, because of its bigger wheels.

For all details about the bikes, please go to the single tests. Now you can find the sensation of each tester. 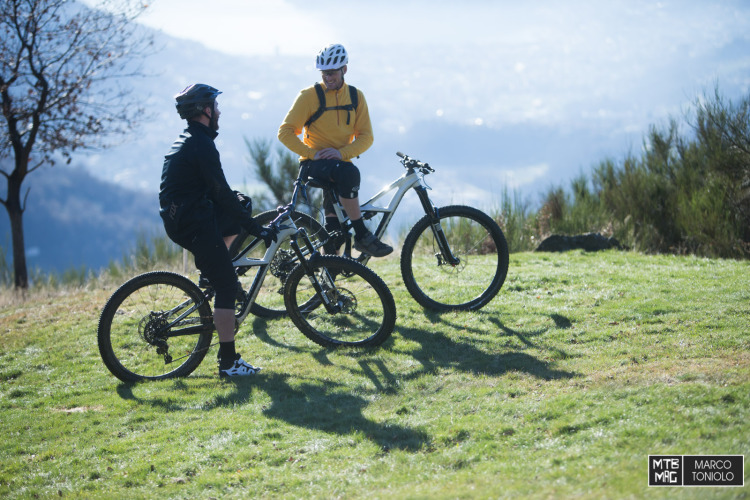 The first thing I noticed on the 29″ is the added stability and roll-over-obstacles performance, both uphill and downhill. The traction helps a lot on steep climbs, but when the speed decreases I needed more power to keep the big wheels going compared to the 650b. I noticed that also in the downhills when the trails get twisty, where I lost some speed because of various riding mistakes, it takes longer to get back into the rhythm. The slower acceleration kept me changing my lines, looking for more rounded and flowy ones, to keep the speed up. The better stability helped out, especially in the turns where it was easier to hold a line. I noticed also that my position on the 29er was really central, a kind of “inside” the bike, that correlated directly with body weight distribution. Each small movement transfers to the riding: I needed a little more power but smaller movements were required on the bike. The 650b, on the other hand, is more reactive and lively, I could say it’s even more fun in some aspects, but requires higher fitness to be controlled properly. 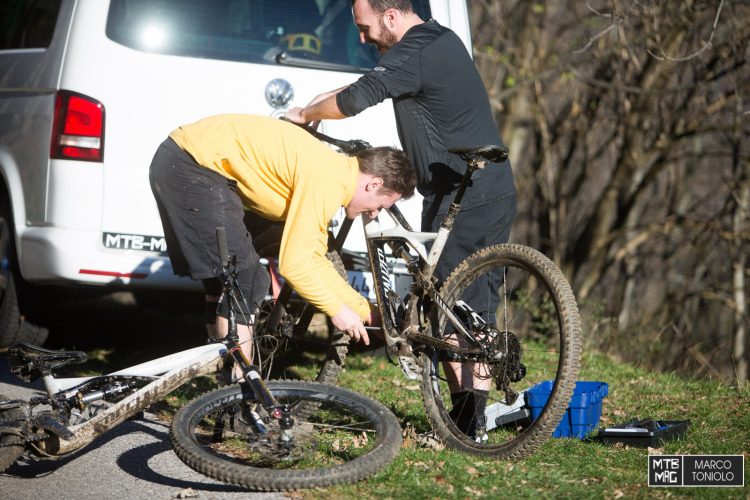 I would define the Enduro 29er and 650b like twins: very similar in how they look like, but with a different temperament: the 29er  is more composed and rational, the 650b more lively and dynamic. I don’t know which one I prefer, probably for my style of riding I’d go for the 650b, but it would be interesting riding the 29er long term, as it is the only one of its kind on the market.

Both bikes are “easy”, that means that you feel comfortable on them starting with your first ride.

The bigger wheel size didn’t impress me at the beginning, what impressed me was how the bike manuals: once you pull up the front wheel it never goes down again!
The 29er never felt bulky as I expected, for sure the front really “sticks to the ground” and gives a lot of self confidence during the ride. The more the terrain gets rough, the more this quality comes out. When changing direction the bike is not super reactive, I could feel the bigger wheels size and I needed more power to ride it.

On the other side, the 650b is more nervous and for the unexperienced rider can become hard to manage. 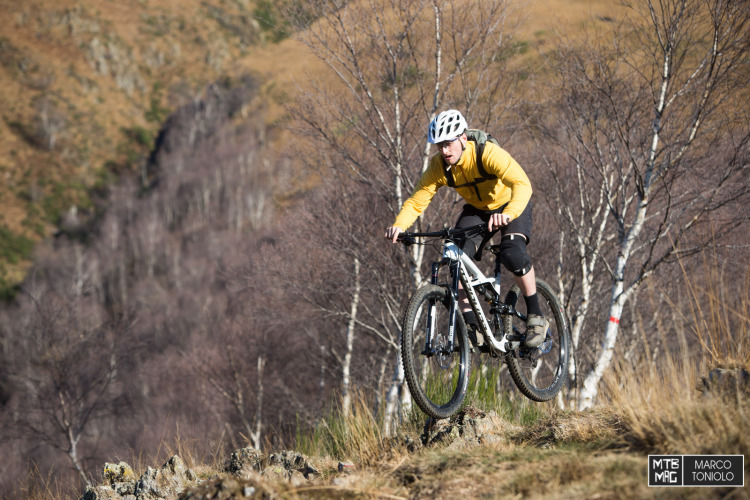 The bigger wheels roll much better over obstacles and steps when climbing, there is no comparison to the 650b. I could search for lines that normally would have brought to an “over the bars” crash. Getting into the turns is harder with the 29er: I had to anticipate them more than with the 650b, using more room on the trails, but once that the bike was on the line I chose, it followed it really well. This is on one side a positive thing, especially if you know the trail well it’s easier to keep a higher average speed, but on the other side it limits you when you have to improvise or react to a bad line.

Practically you have to ride as rounded as possible to get the best out of  this bike, because you have to keep in mind that the 29er is slower when accelerating, for example after a slow turn. In this case the smaller wheels helps out a lot, when saving the line at the last second it’s easier to change trajectory.

My favorite one? The 650b: more “playful” and responsive in the riding. 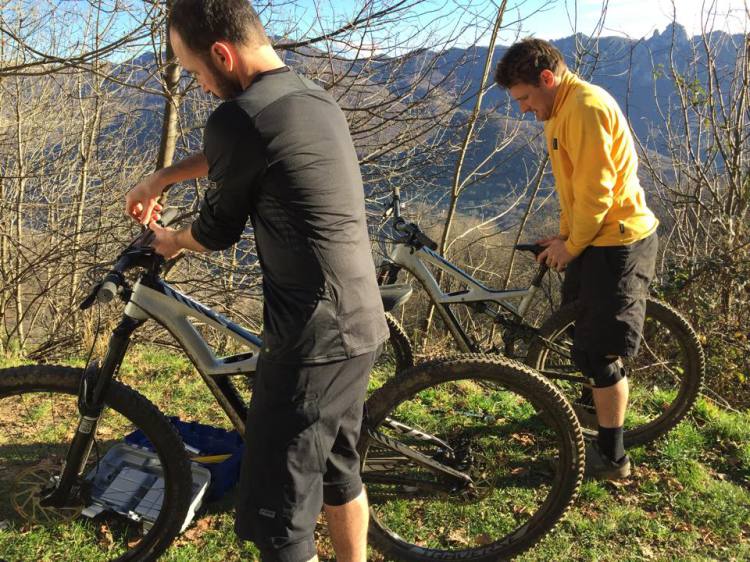 Straight away: it’s hard to choose between the Enduro 650b and the 29er. On the 29er I love the traction during the climbs and the grip when descending, combined to the easiness to roll over obstacles, both at high and low speeds. When riding fast the bike “floats” very well over big rocks, helped by the well harmonizing suspensions. In slow technical sections the bigger wheel size avoids painful over-the-bars, like in a typical alpine switchback with some loose rocks at its exit, where it’s necessary to push the pedal hard to clear it. Sure, you won’t find many of these spots during an enduro race, but you will if you like alpine tours. 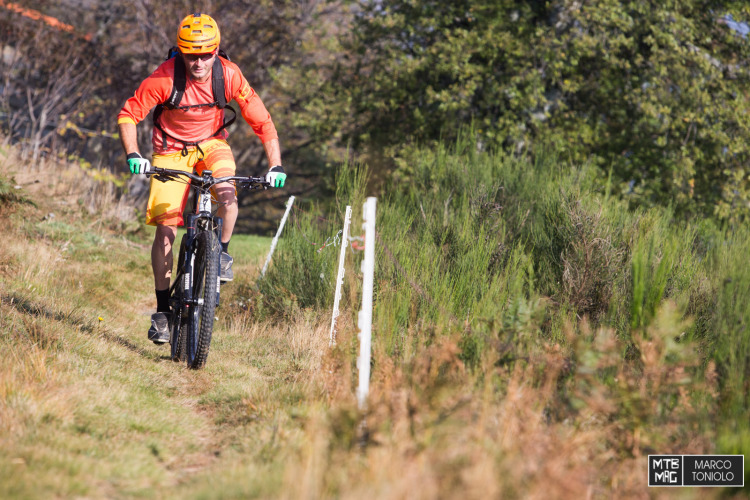 I can’t deny that the 29er is harder to get into the turns, especially when they are fast. More physical strength is needed to bring the bike into the line, but once it’s there, no 650b or 26″ can keep up with the traction and self confidence given by the grip and rolling characteristics.

I can’t really complain about the weight: Specialized minimized the weight difference between the two bikes: the Expert Carbon 29er is only 400 grams heavier than the 650b (12.7 kg for the 650b, 13.1kg for the 29er, without pedals and tubeless). You can barely feel it during the climbs, where the 29er crushes the competition: there is no other enduro bike that climbs as well. Speaking of enduro, it’s no secret that the downhill is the most important part of all where I like the agility of the 650b, but when it comes to my favorite type of riding (long tours in the Alps) I can really appreciate the self confidence of the 29er on long and technical descents. As you may have gathered from the testers’ comments, all three agree that the 650b would be the right choice for racing, where its agility and liveliness helps to react fast. And where the climbing is not important. If you prefer classical alpine riding, with lots of technical uphills and downhills, there is no reason not to choose the 29er. There is one exception: if you need a Small size, you will have to buy a 650b, because Specialized doesn’t sell it with the bigger wheels. On the contrary, if you have an XL, there is no 650b available.

Which is the fastest bike? Hard to tell, it depends on lots of factors like riding style and your home trails, but if you’ll ask the 2014 Superenduro Series Winner, Marco Milivinti, he’d say: the 650b.

[Video] The Rise of Enduro In Canada

[Comparative Test] 15 Enduro Bikes, Back to Back

[Video] The Dudes of Hazzard Part 5