After a surprisingly long, successful run on the same chassis for a years and years, RockShox updated the BoXXer for 2019 with a completely new design, from the ground up. With the emergence of 29″ wheels in the DH scene, it was only a matter of time before adaptations needed to be made in order to accommodate big wheels. So – the new fork features Boost hub spacing, more tire clearance and an updated, completely flat crown, amongst other things. I’ve been riding a 27.5″ version since last spring and after racing it in the US Open, doing numerous laps in Whistler, Coast Gravity park and Northstar, I feel confident in reporting my long term thoughts… 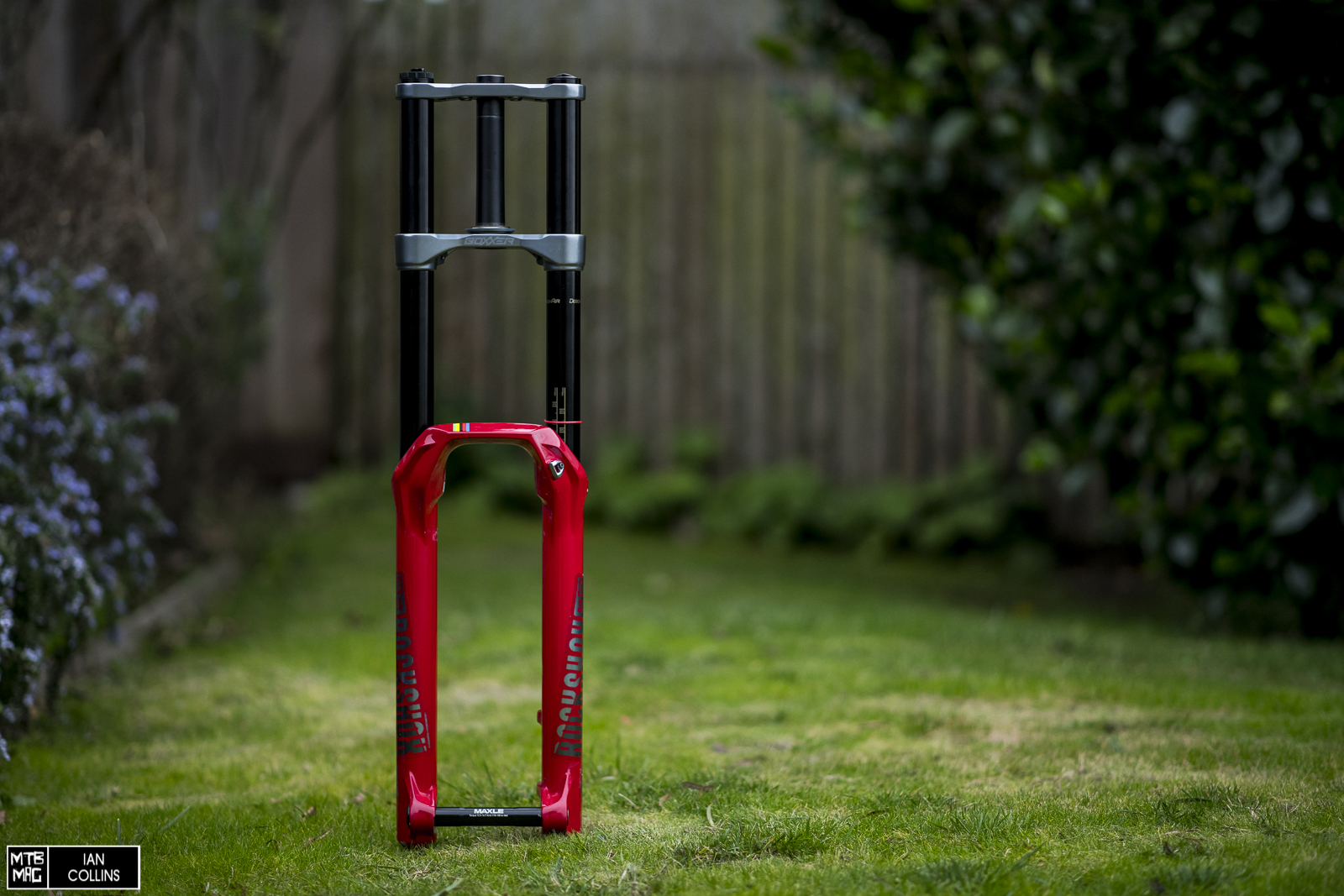 Aside from the chassis overhaul, perhaps the most obvious update is the new Charger 2 damper, which now features independent high and low speed compression damping, as opposed to just a single compression adjustment. This new Charger 2 damper still uses a bladder, but did see a complete re-design. Also – while the new flat crown sits dead flat, to better work with taller 27.5″ and 29″ wheels, there is still a drop crown available. 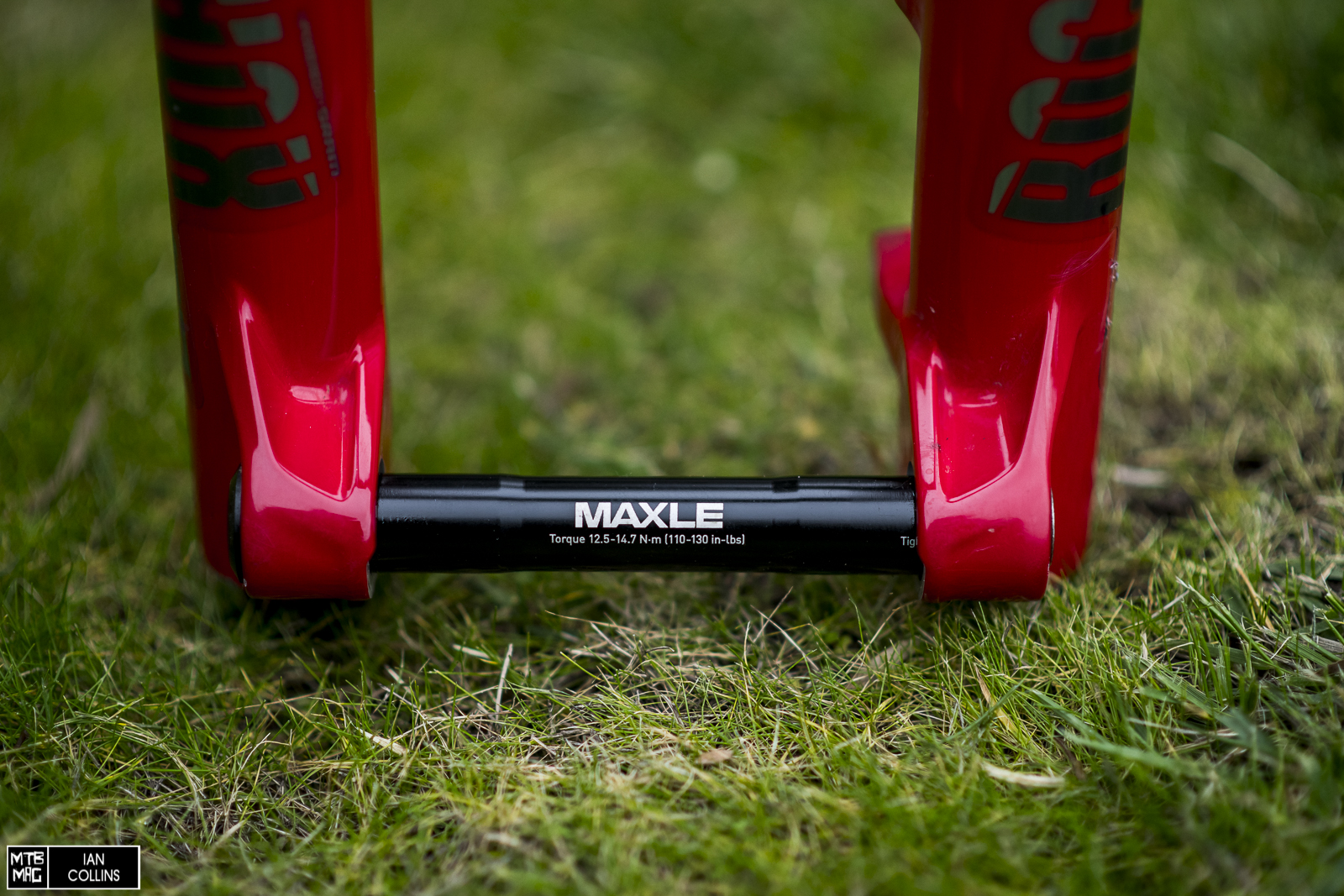 With bigger wheels come bigger responsibilities. The new BoXXer has an updated Maxle, and now features Boost spacing. Bigger wheels’ spokes need broader bracing angles between the hubs and rims. With 29″ wheels on the rise in the DH racing world, Boost is here to address that. With that in mind, if you have a standard DH hub spacing, it isn’t hard to find a 5mm spacer for your rotor and longer bolts to boot. The bottom line is that this is NOT a conspiratorial ploy to sell you new hubs that you don’t need. 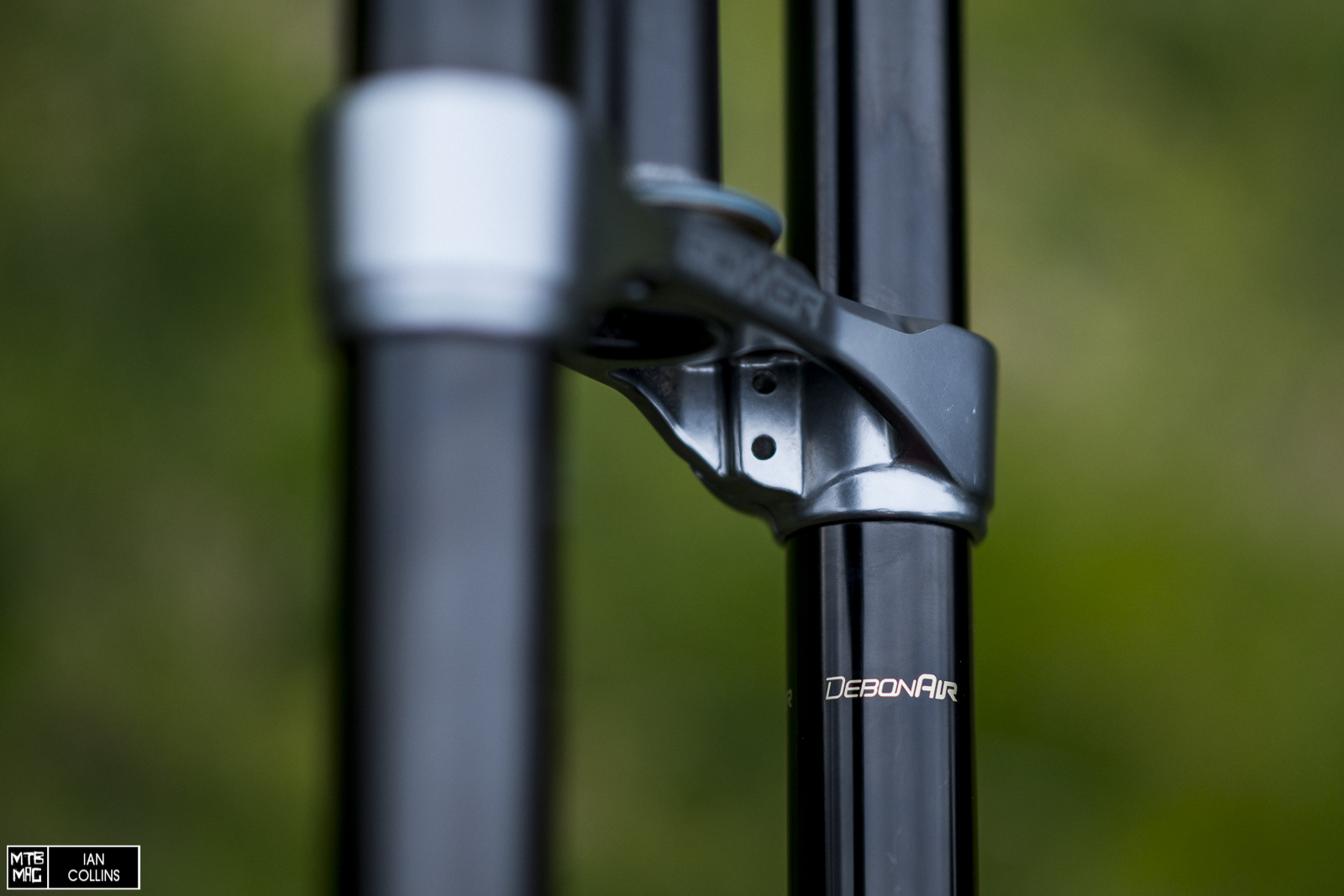 The newly updated DebonAir spring is perhaps the single biggest upgrade. Compared to the last iteration, the negative air spring volume has increased quite a bit. Like with the Lyrik, RockShox engineers brilliantly found space inside of the hollow air spring shaft. This increased volume helps to reduce initial breakaway force and provides a more “coil-like” feel. Compared to the old BoXXer, it requires more air pressure, but less volume reducers. More on that later… With the BoXXer, the torque specs required are etched in on the crowns, right there in plain sight. A subtle update that could easily go unnoticed is that the screws on the crowns are now angled in a way that a 3-way or foldable allen key set doesn’t bump your handlebar, making height adjustments and general maintenance faster. 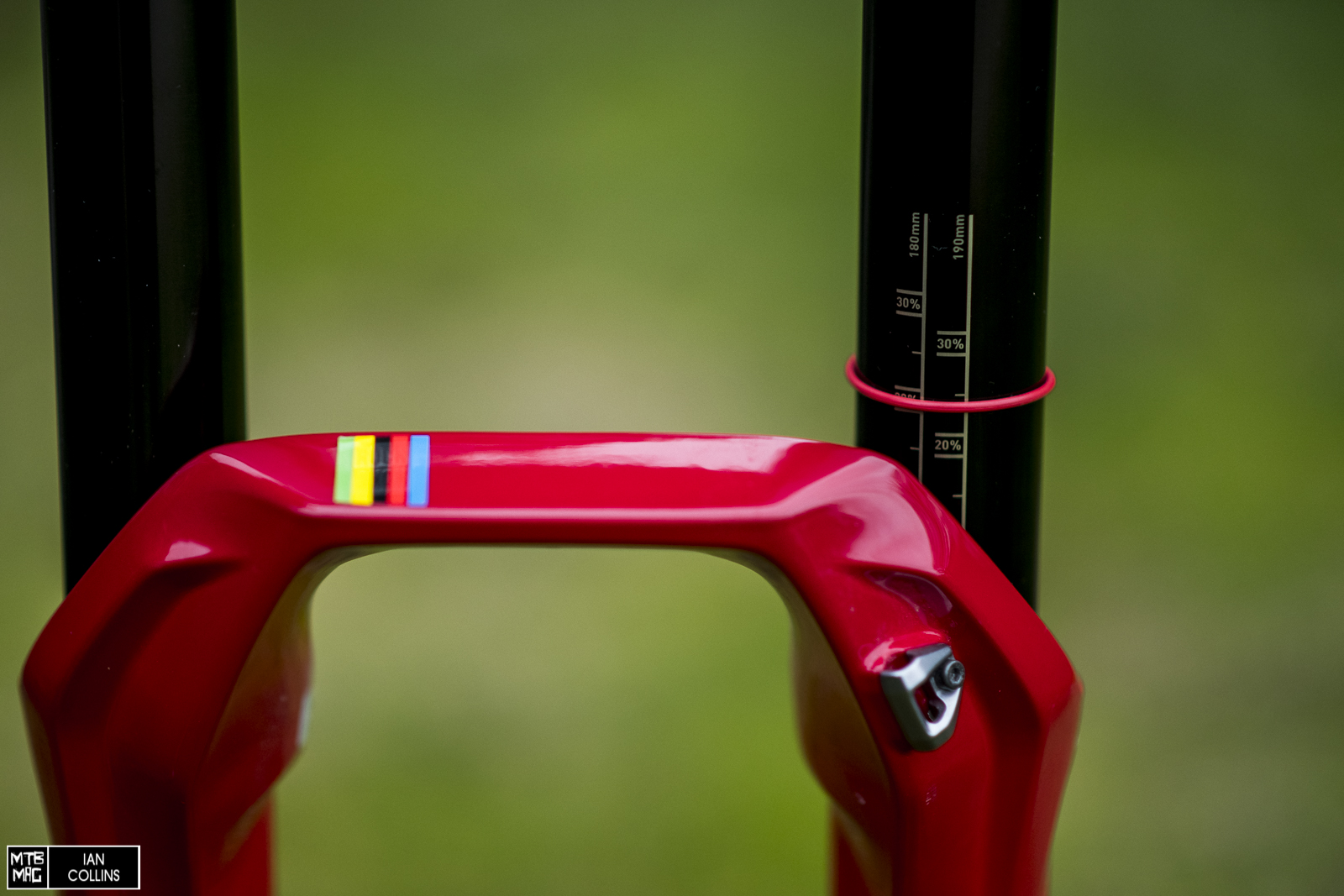 Etched in “Air Guides” are a patented RockShox exclusive that should surprise no one at this point as they’ve been around a while. The brake hose mount has been cleaned up and it’s now made from aluminum (instead of plastic), and threads in at a 45º angle, which, like the new crown bolts makes life easier when wrenching. 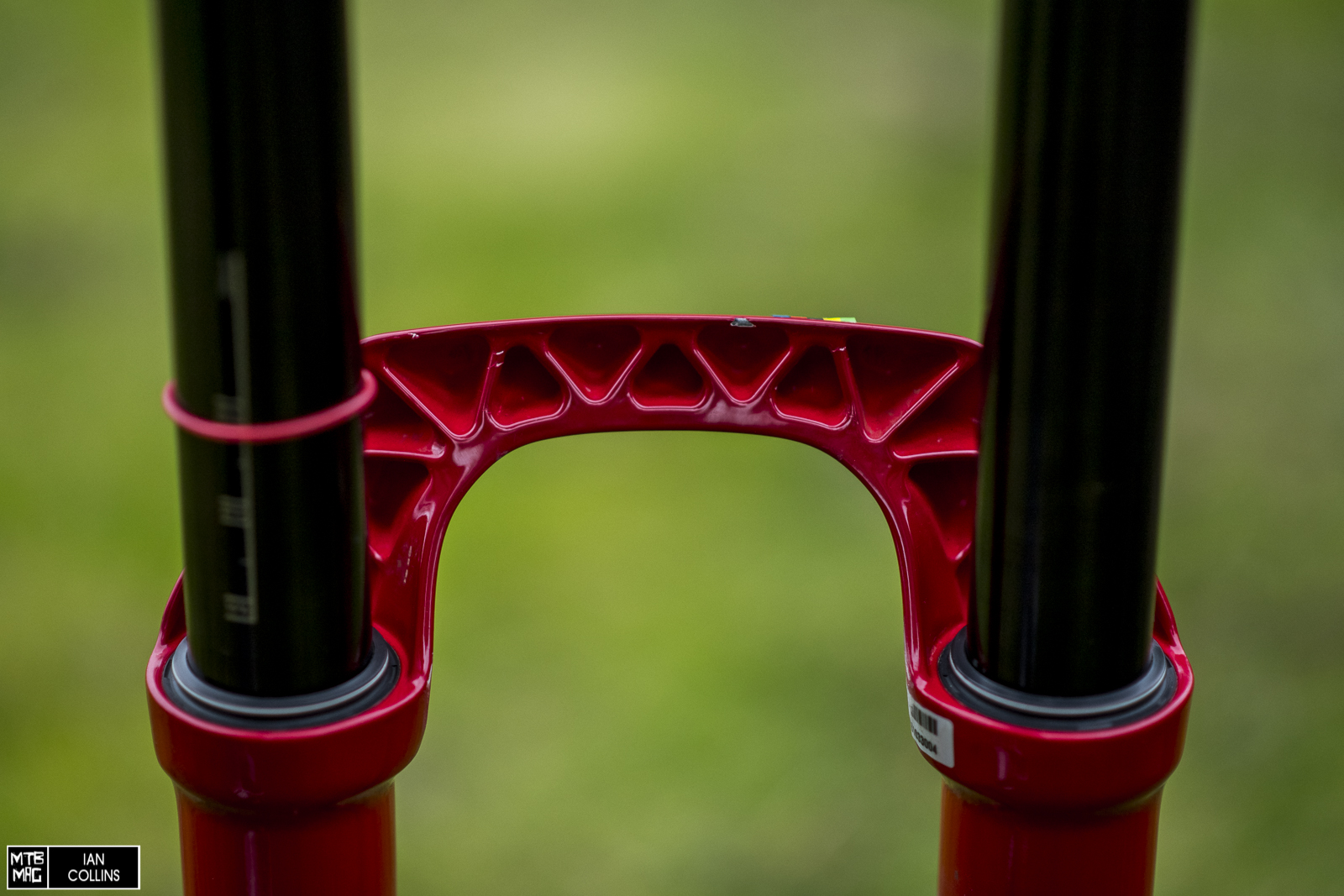 While the BoXXer keeps its fairly lean 35mm stanchions, it now sports a wider stance, a broader arch with a beefier feel and even more tire clearance.

When it comes to setup, this is an entirely new fork, but if you’re used to RockShox, it will still feel like home. With the last iteration of the BoXXer, I ran around 100 PSI and used 3 bottomless tokens. In this fork I ran in the 130-140 PSI range and only felt the need to use just 1 token to put me around 19% sag. For the sake of reference, I weigh about 185 pounds (without gear) and I ran the following:

I figure that I’m right about median weight for a DH rider, so given that I found myself in the middle of the adjustment range on just about every setting, it’s safe to say that RockShox hit the nail on the head in that regard. 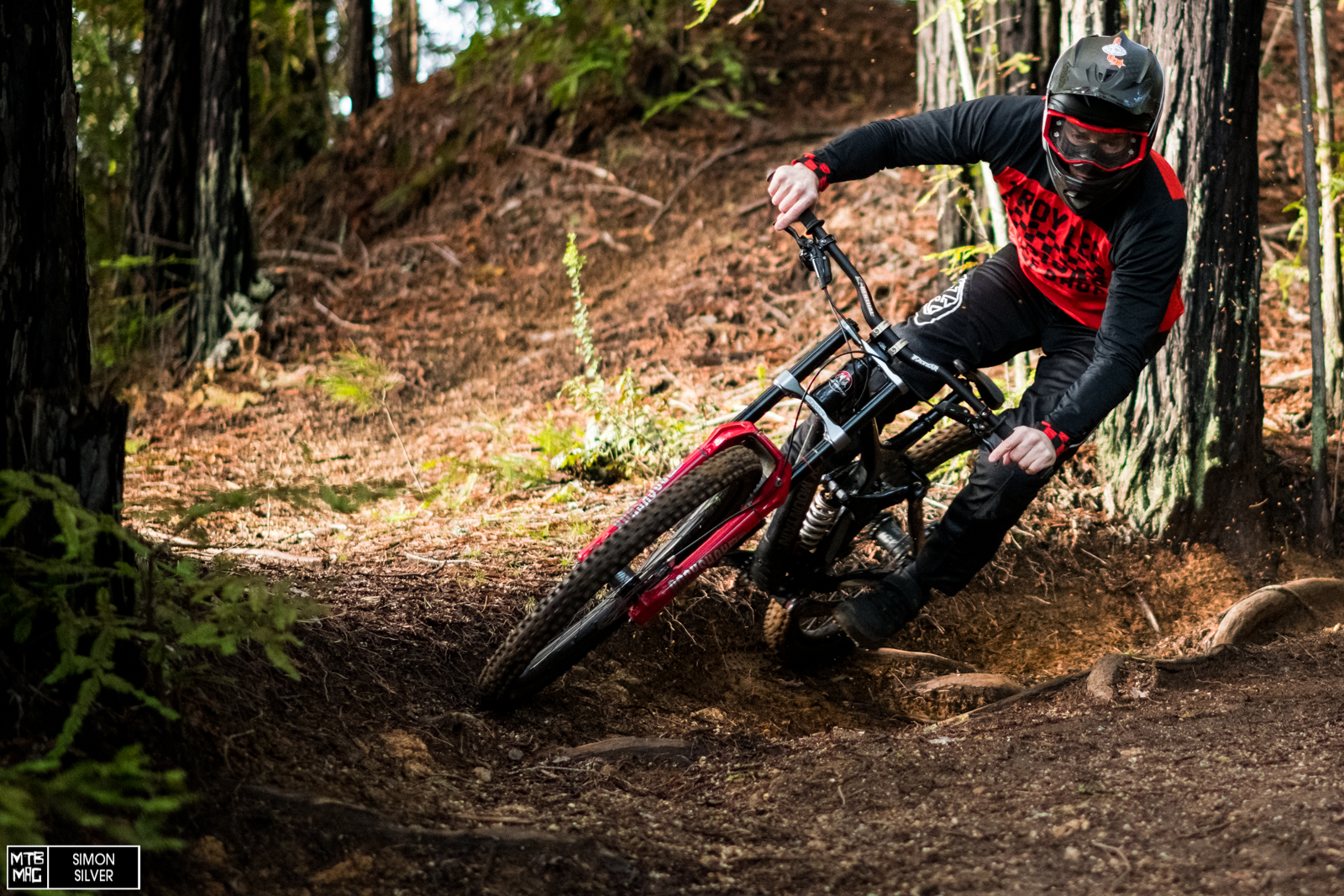 Early on in my riding, there were three things that became immediately apparent, in no particular order. The new air spring’s curve is spot on perfect – in my opinion, there truly is no need for a coil spring now. The chassis has been stiffened up, but not too much – despite its beefier crowns and lowers the new BoXXer still uses relatively small 35mm stanchions. Stiffness under braking seems to have greater gains than torsional stiffness, but I’m no engineer. Either way, just like past models, the fork still provides just the right amount of flex in rough, technical terrain so that you don’t get balled up from deflection. The new damper is far more refined both in feel and range of *usable adjustment. Speaking of refined, a great deal of what’s made this BoXXer so much better is cleaned up manufacturing processes. When I first slid the stanchions into the crowns they lined up perfectly and went in smoothly – this was not usually the case in the past where it was often a wrestling match. Just like in the Lyrik, the air spring features a new aluminum (not plastic) seal head which has more purchase on the shaft, thus reducing friction. Long story short, improvements like this are seen throughout the fork and the sum of those parts made a huge difference on the track. 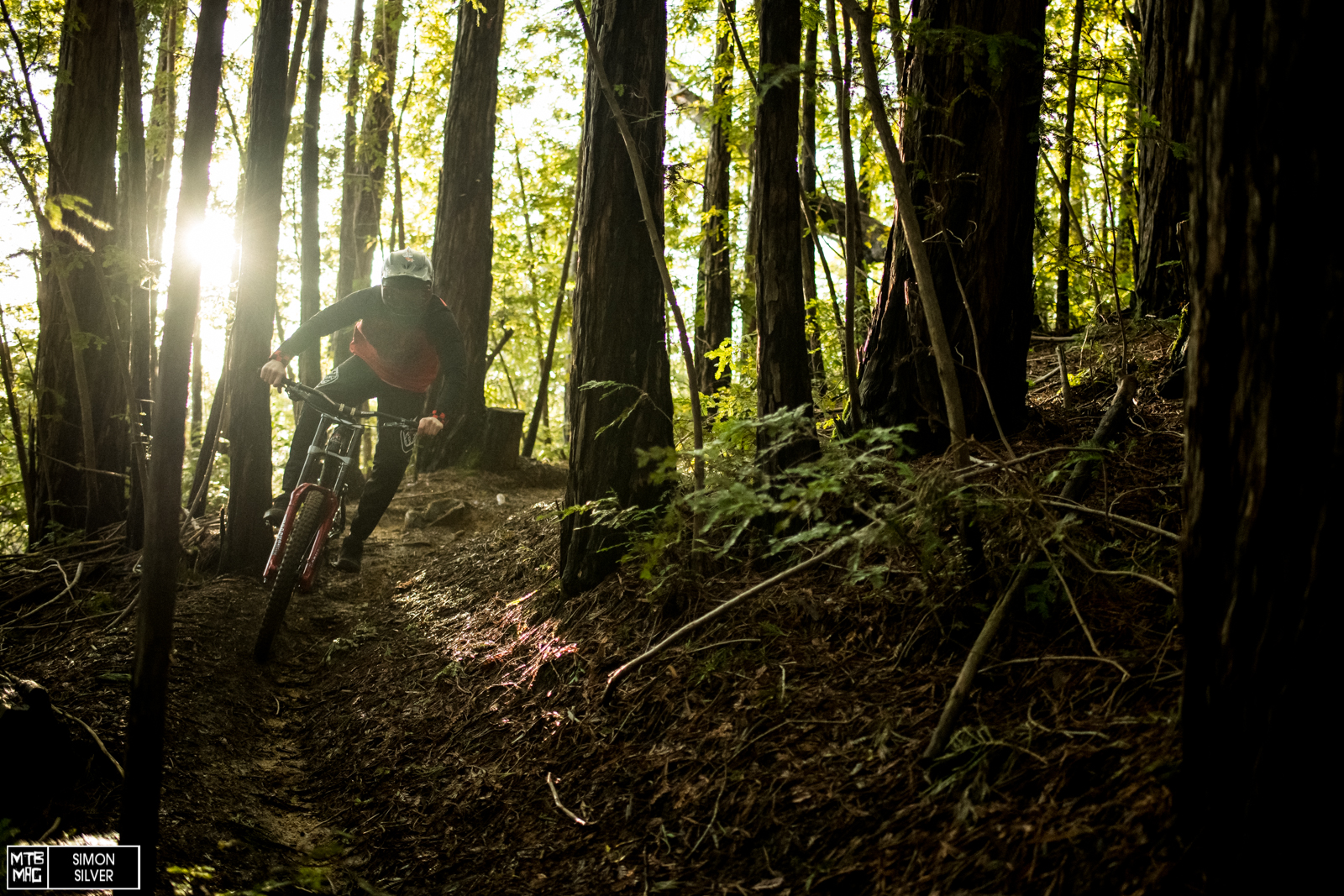 In terms of adjustments, I was happy to see two compression adjusters. I don’t go completely crazy with tuning, but when bouncing between different types of terrain, it was nice to have the option. The new knobs are easy to grab with gloves and their detents are crisp and clear both audibly and in terms of feel. It was quite a surprise to just need only one volume reducer (“token” in RockShox speak), but that’s where I found myself when searching for that perfect curve (light off the top, supportive in the middle, uses full travel but resists bottoming) which I just couldn’t quite attain with the old BoXXer.

The one topic I haven’t touched on is weight. Wider, stiffer, more adjustments, more reliable (and better feeling) aluminum parts which replace plastic ones, and yet somehow the new BoXXer is lighter? I’m not sure how they pulled it off, but the BoXXer World Cup Debonair is the king of light weight DH forks, so if that matters to you – look no further. At $1,699, the price is on par and what you’d expect from a flagship DH fork, so there isn’t much sense in making comparisons in that arena. Full disclaimer – I have not ridden the new Fox 40 with the Grip 2 damper, but it has a mid-valve, variable valve control and independent high/low speed rebound, so on paper at least, it offers more than the Charger 2. That said, it’s worth considering that the 40 weighs a good half pound more than the BoXXer. When I review something, I’m usually thinking long and hard about what I would change on that product, and to be quite frank, I wouldn’t change a thing on the BoXXer. Okay fine – I actually think the new red paint isn’t quite as durable as it could be, but it’s certainly not bad enough to make a fuss. Anyhow, there are many small improvements that have been made to the fork, which make maintenance and tuning easier, but above all the biggest improvement is feel. The new chassis is stiffer and handles more accurately. The Charger 2 damper is more consistent, has expanded tuning range and seems to handle the worst situations in a calmer manner. To me though, as someone who generally has preferred coil over air, the best improvement is the new Debonair spring, which feels like it has the best of both worlds.

[Video] Don’t Call It A Comeback! – Peaty VS Vergier