Quite often, I receive a press release about a newly updated SRAM/RockShox product and upon finding that they didn’t update the chassis or architecture, but rather – just the internals, the skeptic in me wonders if said product will be all that much of an upgrade, compared to its predecessor. However, more often than not, the relevance of their company ethos – “Incremental enhancements. Perpetual improvements…” inevitably proves me wrong, and continues to ring true. 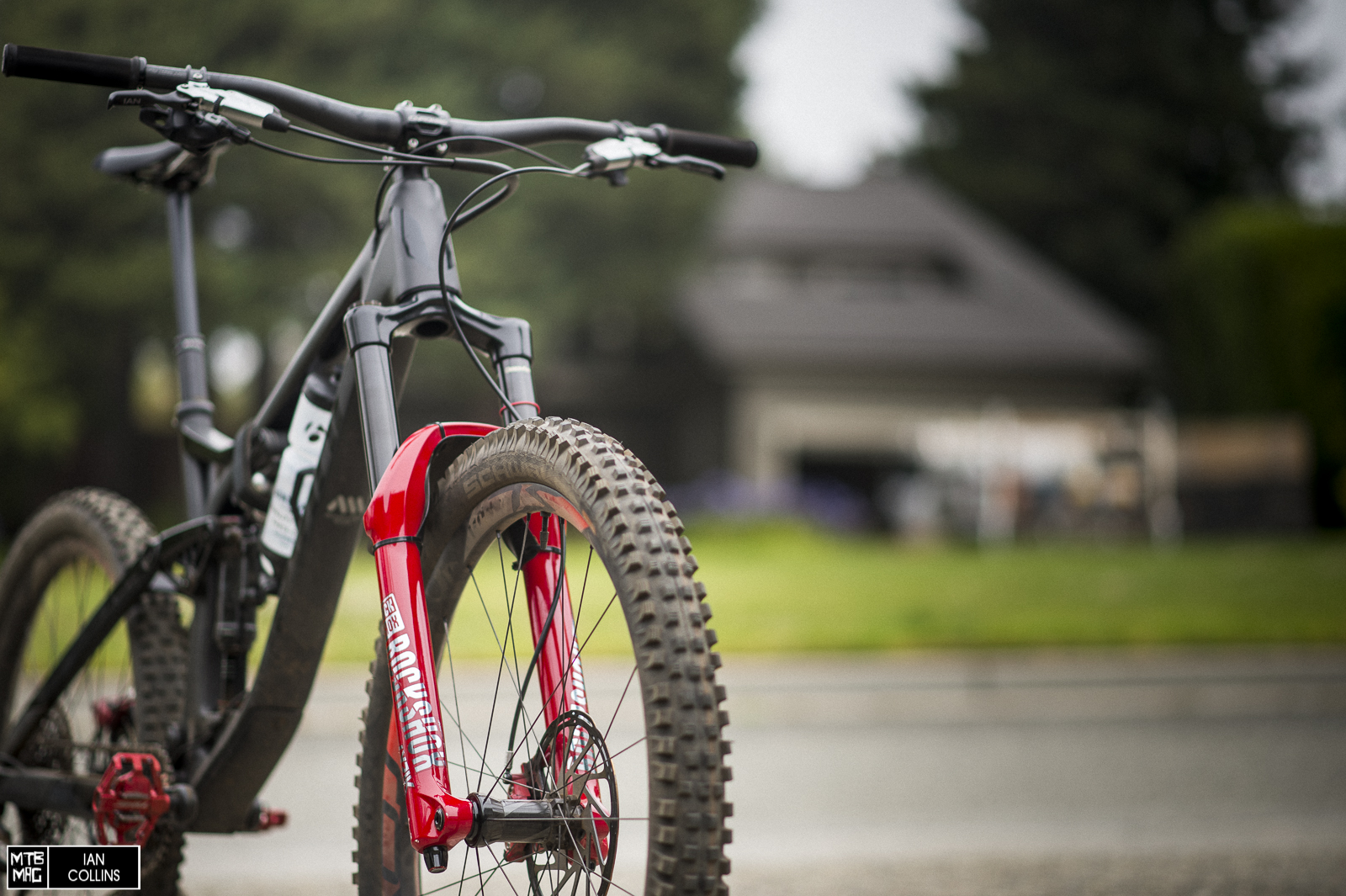 In my defense, like any large brand, there is a mire of marketing jargon to wade through. It takes a bit of reading between the lines, and ultimately spending time riding the product(s) before you can accurately gauge the merit of the updates. The case of the new Lyrik echoes my prior rambling. On the surface (color aside), the fork appears relatively unchanged as the upper and lower assemblies remain identical. Yet the air spring and damper received updates, as they quite often do from year to year and, per usual it’s fun to split hairs and see how effective those hidden beneath the surface, incremental changes really are. In this case, perhaps more so than other instances, the sum of the parts made a drastic improvement. Read on to find out how and why…

It’s safe to say that the new Debonair air spring assembly had the most perceptible impact, on trail, out of all the updates. It’s shown above, with the red anodized alloy seal head compared to its predecessor. Before we dive into more detail, just know that you can retrofit the new air spring assembly into your Lyrik, Yari, Pike or Revelation for just $42. Anyhow, RockShox switched from a Delrin (read: plastic) seal head to a larger aluminum head. The larger size helps to prevent binding under load, and the seal head now slides on a bushing, which has more purchase on the shaft, even further reducing friction under load. All in all, this small part deserves lots of credit for Lyrik’s improved action.

Another big improvement with the new air spring assembly is that RockShox managed to find a substantial amount of extra negative air spring volume inside of the hollow shaft, which is accessed by the two small ports shown at the base of the seal head above. Increasing the negative air spring volume helped to further improve initial sensitivity and even out the rate, leading to more mid stroke support and a better likelihood of eking out the last bit of travel at the end of the stroke; something I had a hard time with on the last Lyrik. 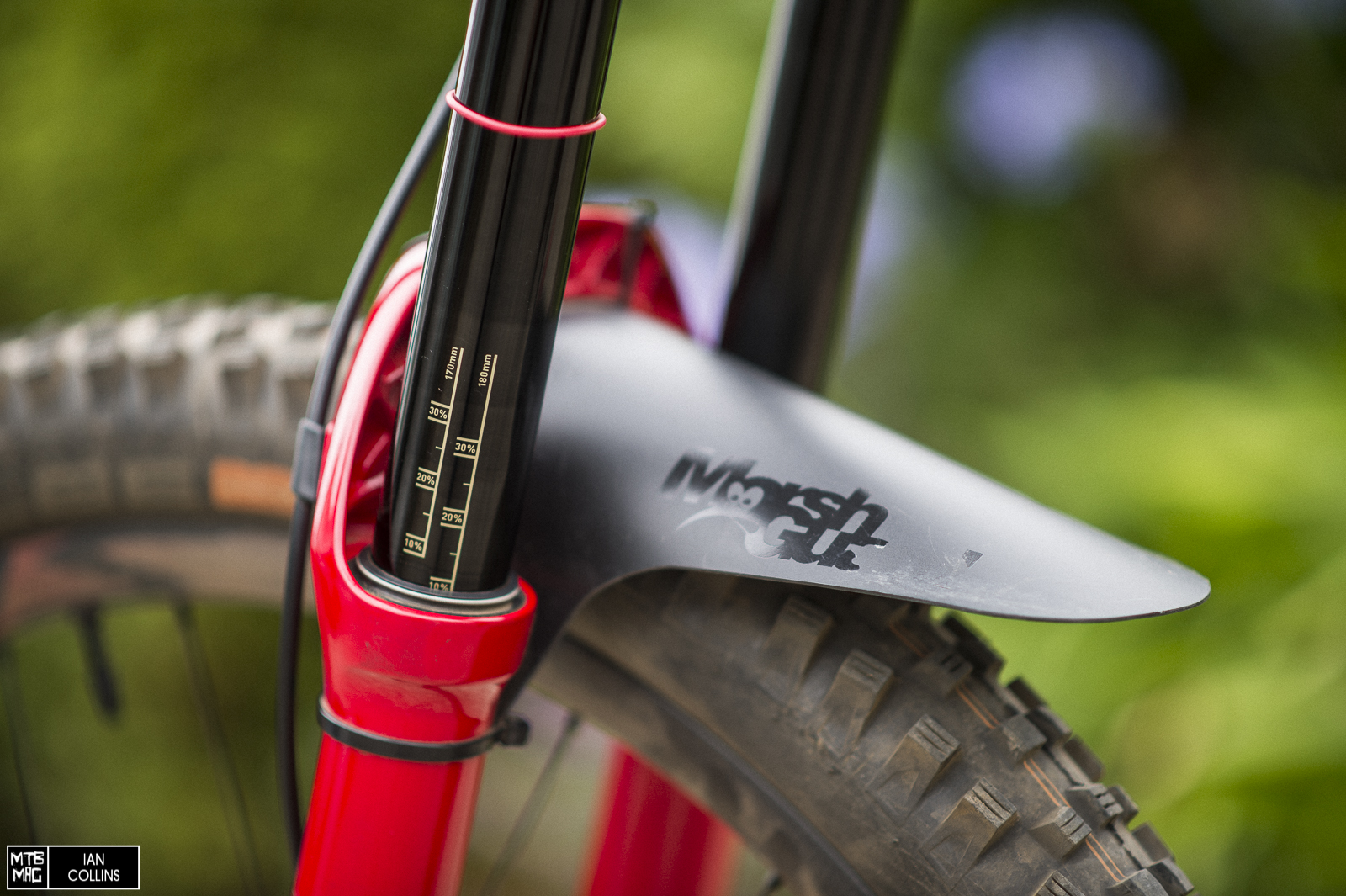 Sag gradients, a RockShox patented technology, remain in place – making it much less difficult to get an accurate gauge of your desired sag. It’s etched into the stanchion, right there in front of you.

The other side of the story is the updated Charger 2 RC2 damper. The Lyrik still has a 20 click low speed compression damping adjuster, but switched from a 3-position (Open/Trail/Closed) lever to a high speed compression adjuster. The high speed adjuster has 5 clicks, via its knurled knob. While this does forgo the lockout option, by departing from a “one tune for all” layout, it makes the fork’s high speed compression far more tunable for a wider variety of riders, particularly benefitting lighter and heavier riders. The new damper has more ports, which are larger, as well as less hardware and increased oil volume. 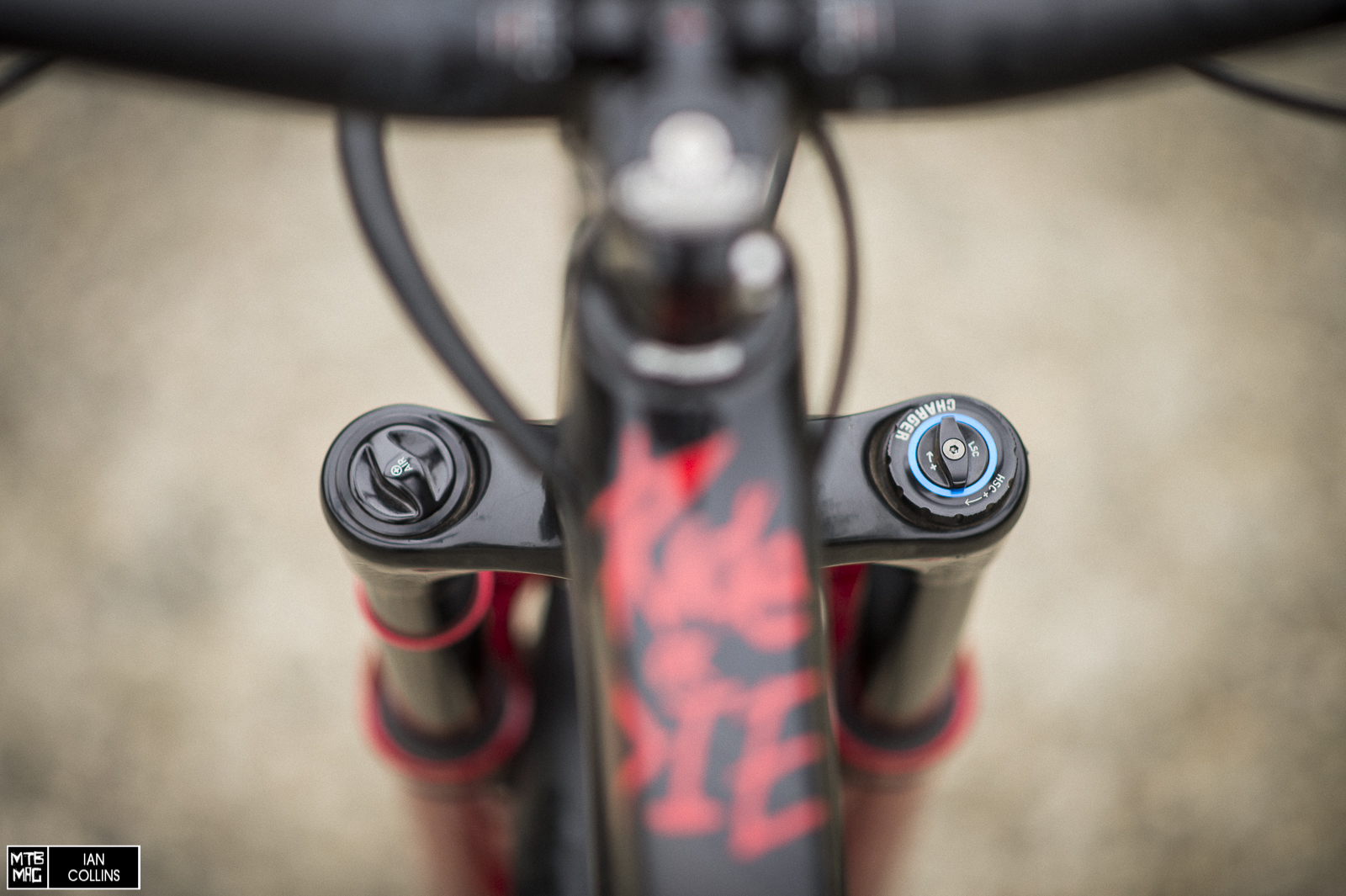 Riders with the last iteration of the Lyrik or Yari can upgrade to the Charger 2 RC2 for $244+ USD. This is a relatively painless, plug and play swap due to the fact that the chassis remains unchanged. The new Lyrik is “Boxxer Red”, just like the new Boxxer. It matches my spiffy Code calipers, but if red isn’t your thing, the fork is available in a much more universal black finish as well. It’s a bit hard to gauge, but I feel as if the red paint has beenb slightly more prone to chipping as I’ve picked up a couple tiny dings rather easily, although it could just be in my head.

It’s worth noting that the new Lyrik requires a bit more pressure to attain the same sag at a given weight…For most, that number will generally hover around a 10-15 PSI increase. At 185 pounds, I eventually settled in at 95 PSI for most of my riding after some fiddling around. For what it’s worth, I ran around 82 PSI in my old Lyrik, which also had 170mm of travel. Anyhow, I started out with the single token that came installed in the Lyrik, in stock form. As far as damping settings go, I typically ran the high speed compression 2 clicks from open, and 7-8 clicks from open for low speed compression. 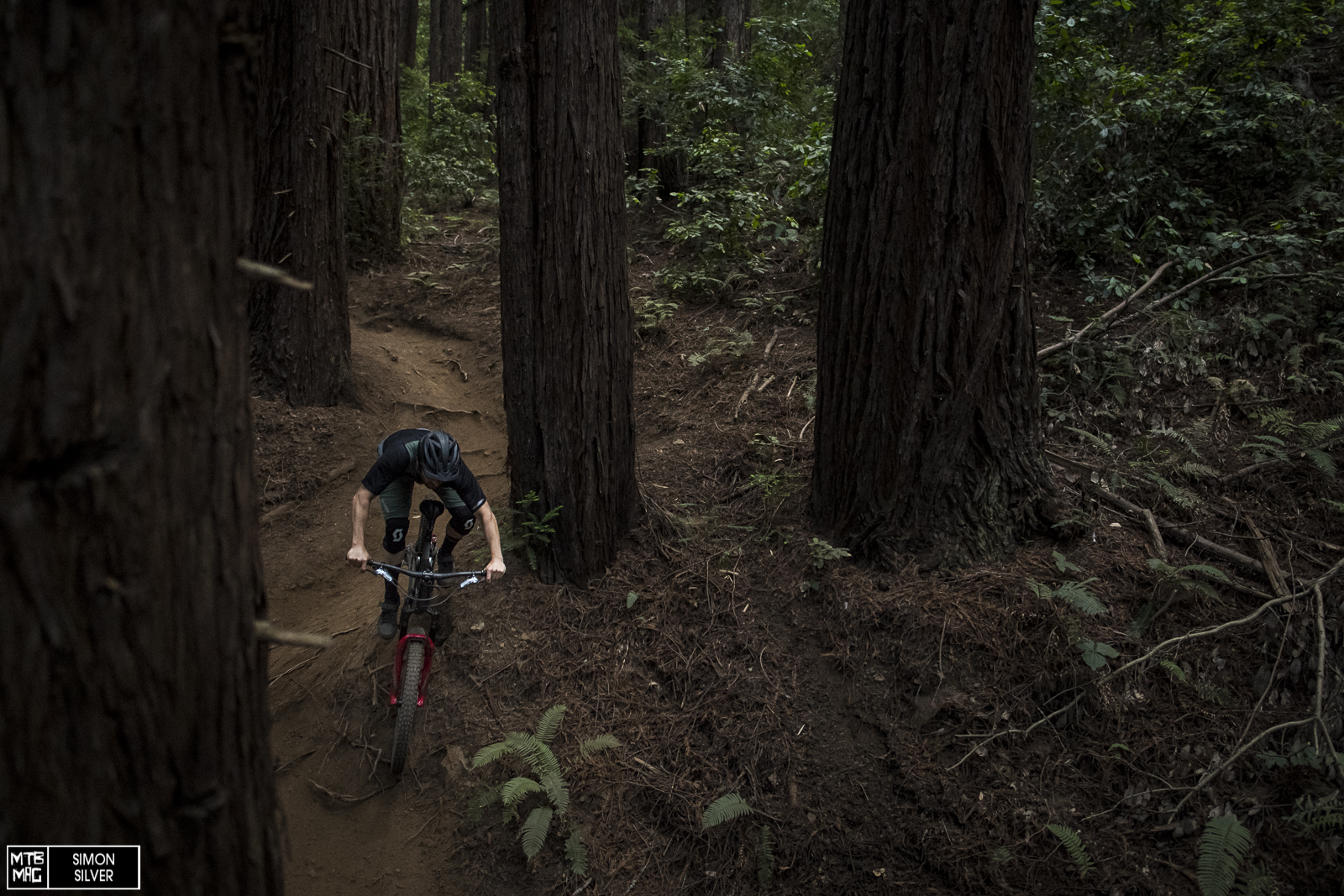 Before even dabbling with setup, I did immediately noticed that the action of the fork was substantially smoother. Again, this is the recurring theme with SRAM/RockShox as I noted earlier, quoting their motto. This feeling was reminiscent, but even more noticeable still, back when they switched to high quality SKF seals (which still remain), and increased the negative air spring volume the first time around. Needless to say, the breakaway force is next to nil and seal friction seems to be non-existent.

I tend to really nit pick air spring curves, perhaps even more so than damping, and because of that, I mess with volume reducers quite frequently. So much that with my RockShox forks in the past, I’ve sawed the “bottomless tokens” in half. Out back on my Cannondale Jekyll, I run the “Gnar Dog 2.5” volume reducer in the Super Deluxe. Call me a geek, but hey – why settle between 2 and 3 when you could have it just right, in the middle? With that in mind, I really want that perfect rate of “light off the top” (but easy to push off of), “supportive in the middle” (while somehow eating up chunder), and “progressive ramp, right at the very end” (yet still managing to use the full travel) feeling that I typically only get from the rear suspension kinematics on bikes designed by Dave Weagle. So – long story long, that’s what I got from the new Lyrik right out of the gate.  With the last Lyrik, it was always a pick 2 out of 3 situation. If I wanted progression and support, it came at the expense of not quite getting full travel. When set up to get full travel, the fork wallowed a touch in the middle. All in all, the updated air spring is the cat’s pajamas; it feels coil like, and strikes a much better balance between off the top sensitivity, mid stroke support and bottom out resistance.

*If you have last year’s Lyrik, and you aren’t ready to part ways with it yet, do yourself a favor – just spend the $42 and get the new Debonair spring. It’s a more important, and more perceptible upgrade than the new Charger 2 RC2 damper, and it’s also much cheaper.* Touching on the damper, at my somewhat middle of the road weight, I wasn’t losing sleep over the lack of broader range of high speed compression on the old Charger 2, but I do see how the new damper would be highly beneficial for someone who weighs 130, or say 230  pounds. They’d be closer to the extremes and would stand to benefit more from having increased adjustability. On huge days, not having a lockout was a little bit annoying, but when I know I’m just going to be climbing and suffering for an hour straight, I buried both compression adjusters and the fork barely moved. Then, re-adjusting before the descent just took a few moments. It’s hard to completely isolate the improvements felt from the air spring vs. from the damper, but I did feel as if the damping felt a bit more refined, and better controlled overall.

Regarding the chassis, to me – in terms of how the fork balances its deflection/accuracy (read: torsional stiffness), and rigidity under heavy braking with its overall comfort, the Lyrik is just right. Having ridden a few forks in this category, I think I would rate it as being just a hair less rigid than a FOX 36, but stiffer than most others. Full disclaimer: that is just my quick take from riding various forks. I don’t have hard data from any brands – that is purely an “armchair engineer” comment.  The Lyrik’s tire clearance is quite good –  I went up to 2.5″ with a fender inside and room to spare. With no fender, it’s likely that you could go up to 2.7″, depending on the actual tire size. A single 6mm key tightens up the Maxle Lite, and although it might be tough to gauge, the “Torque Cap” interface helps to stiffen things up at the hub, provided your wheelset is available with compatible caps.

The new Lyrik will leave even the biggest of skeptics with little to complain about. Some may lament the lack of a lockout, but it’s well worth the performance benefits and broadened range on offer from the new Charger 2 RC2 damper. A smattering of improved small internal parts contribute to smoother action, reduced friction (especially when things get dicey) and improved durability. Perhaps most importantly though, the new Debonair spring provides a flawless air spring curve. It’s easily tuned to feel “coil like”, but with even better end stroke support. The chassis itself is unflinching in its steering accuracy, but easy on the hands. Last, but not least, it was wise of RockShox to jump on the short offset options early, future proofing it for the latest geometry trends. Coming full circle once again, RockShox’ constant numerous “small” improvements have culminated into the total package.