Renthal started out in 1969 with an entrance to the motorcycle industry and have since earned a golden reputation as the leading manufacturer of both OEM and aftermarket handlebars. In 2010 they dove into the cycling world full on with the launch of the immensely successful “Fatbar”. Several World Cup and World Championship wins later – Renthal have already established themselves as a bulletproof mainstay in the gravity realm of cycling components. However, Renthal doesn’t just make handlebars. Though they do have a relatively niche corner of the MTB world, they make other cockpit parts such as grips and stems, plus some really nice chainrings as well as a few other accessories. 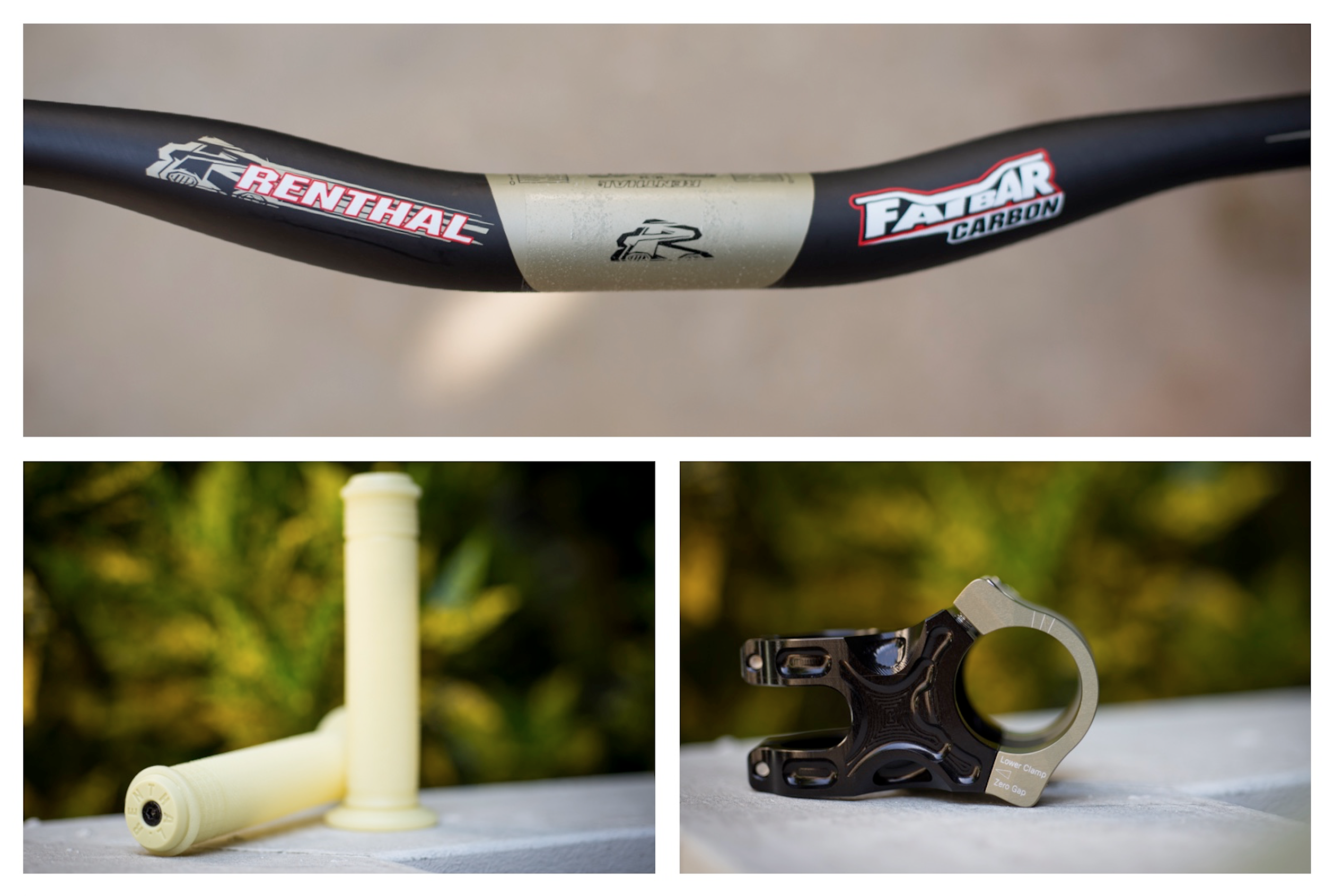 Recently, Renthal started manufacturing some of their Fatbar offerings in carbon fiber, and launched a whole new line of stems dubbed the Apex. They also updated their line of push on grips. A couple months back, we reached out to them to see about testing the new bits to see how they’ve come along. Here are our findings. 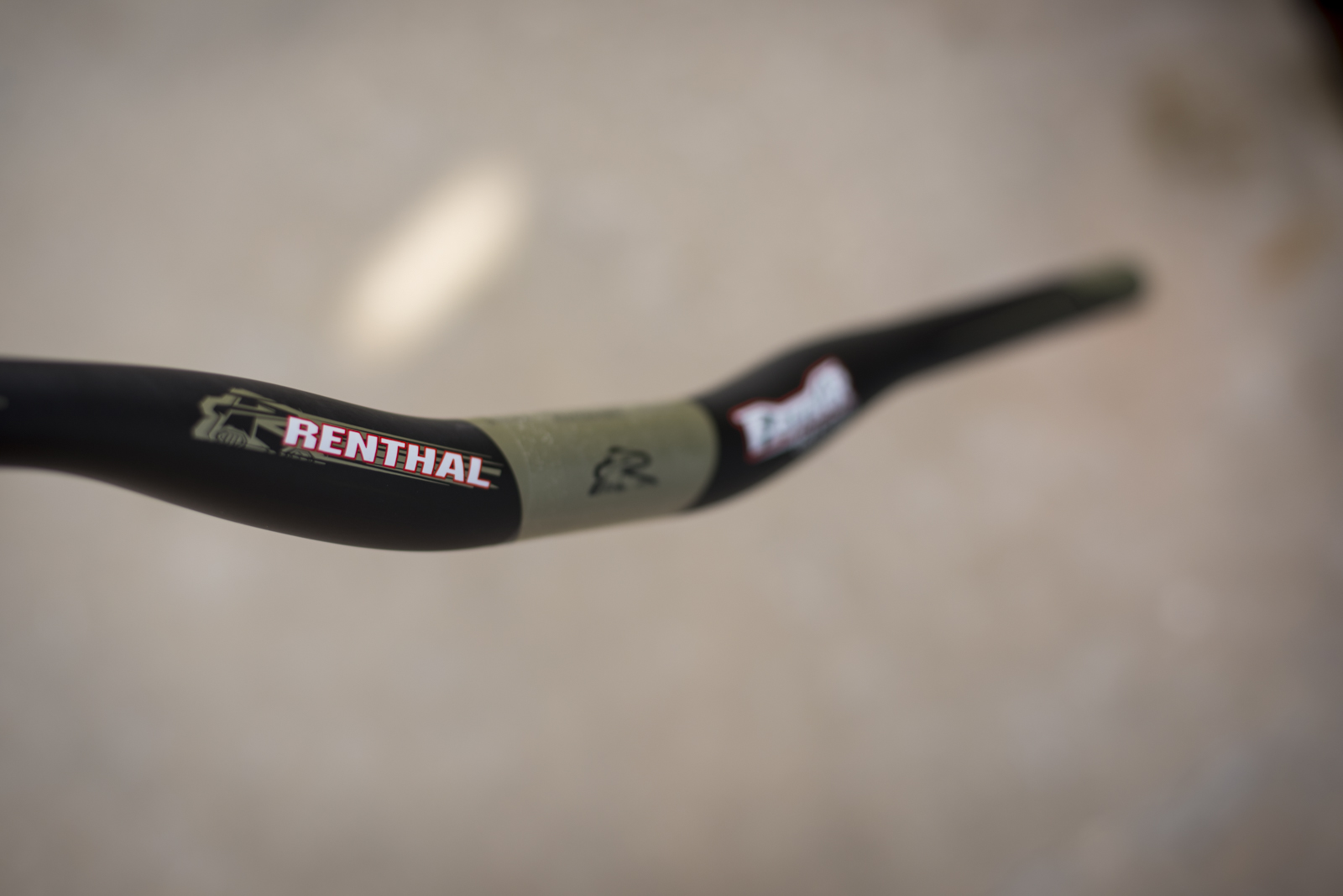 Starting off with the bar, the first thing we should mention is that Renthal also offer the Fatbar Lite, coming in at a slightly lower weight(180 g.) and a narrower width(740mm). Some might find it extreme that we tested a full width bar on an enduro bike, so for those looking for a trimmed down version, that will be your hot ticket. Personally we like wider handlebars and the added control they provide when things get rowdy.

We must admit, prior to getting our mitts on the Carbon Fatbar, the Aluminum version was our go-to handlebar for both trail and downhill. The combination of upsweep and backsweep on it is “just right”. There is something about it that makes you feel at home, not awkward. Aside from that, it was a sturdy, durable bar that you could trust. The new Carbon bar has that exact same back/upsweep ratio and perfect feel. Now, this does come in at a higher price, substantially lower weight, but also a different trail feel. Not in terms of where your hands and wrists rest, but in terms of vibration damping. When laid up correctly, given that it’s resilient in nature, carbon fiber can have a more forgiving feel on rough terrain. The original Fatbar is a great handlebar, but we weren’t alone in thinking it was a bit rough on our hands. 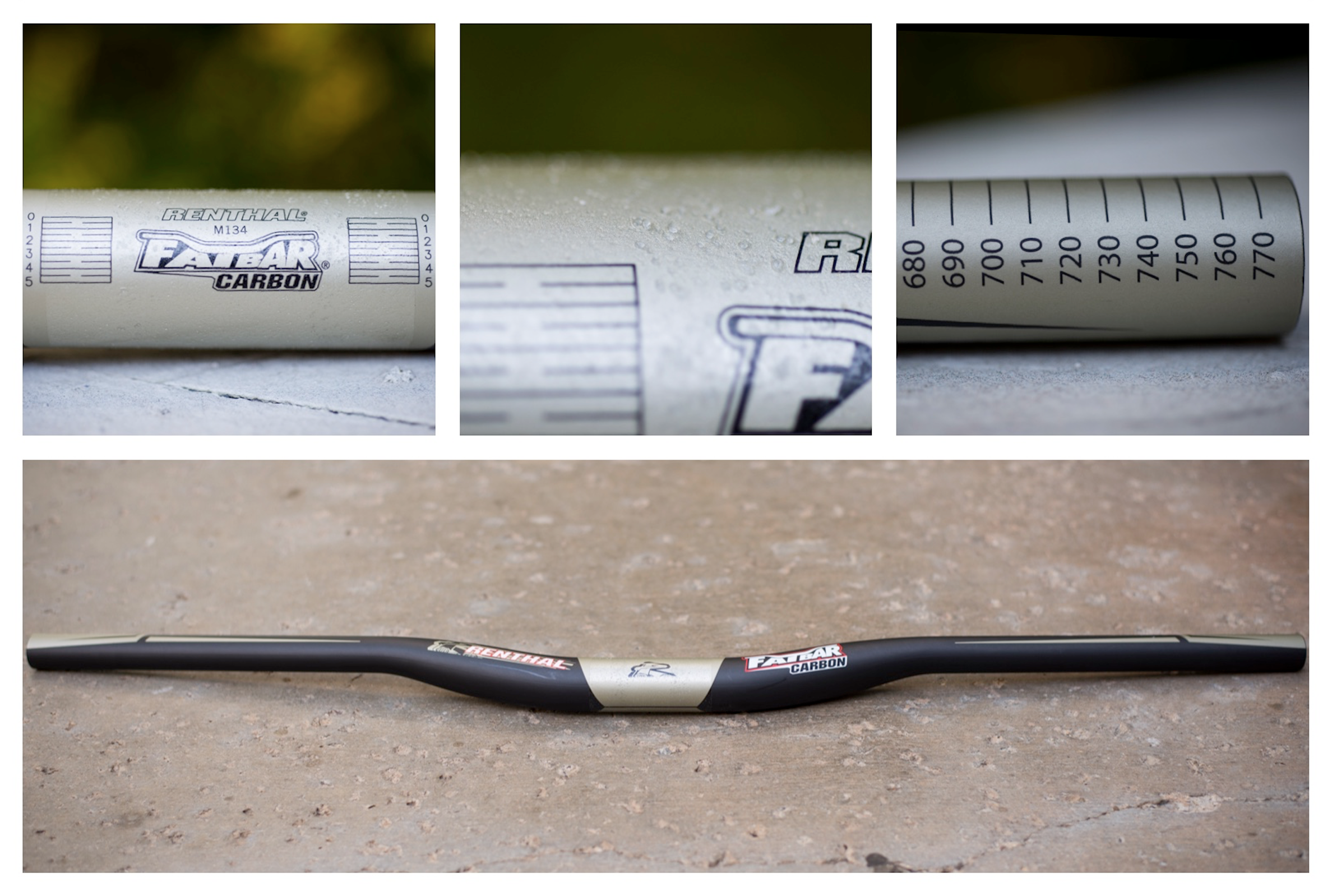 In terms of maintaining the right amount of stiffness so as to handle precisely and not flex excessively under load, the new bar felt just like the old one – sturdy. All in all, the only difference is that we’ve found our hands less fatigued at the end of each ride. Because of the well designed layup of the carbon fiber on Renthal’s end, this handlebar ended up balancing stiffness with vibration damping perfectly. Do we think that spending an extra $100 to save about 1/3rd of a pound makes sense? That’s up to you. However, it’s worth noting that people spend two to three times more money on titanium springs which don’t improve ride quality. This product actually does.

Some noteworthy features on the handlebar are the nicely laid out graphics for alignment and trimming the width. What initially caught our eye and made the bar more attractive to us was the rough, grainy center section. This encourages a bit more bite between the interface of the bar/stem clamping area. Anyone who’s ridden a bar had it slip and roll forward or backward while riding will appreciate this.

As far as durability is concerned, our handlebar has held up nicely even with a few small crashes. The finish is tough and the material is thick. We trust that Renthal has developed the Carbon Fatbar to withstand the worst that a gravity rider can dish out. It’s already has a couple of World Cup wins under it’s belt. 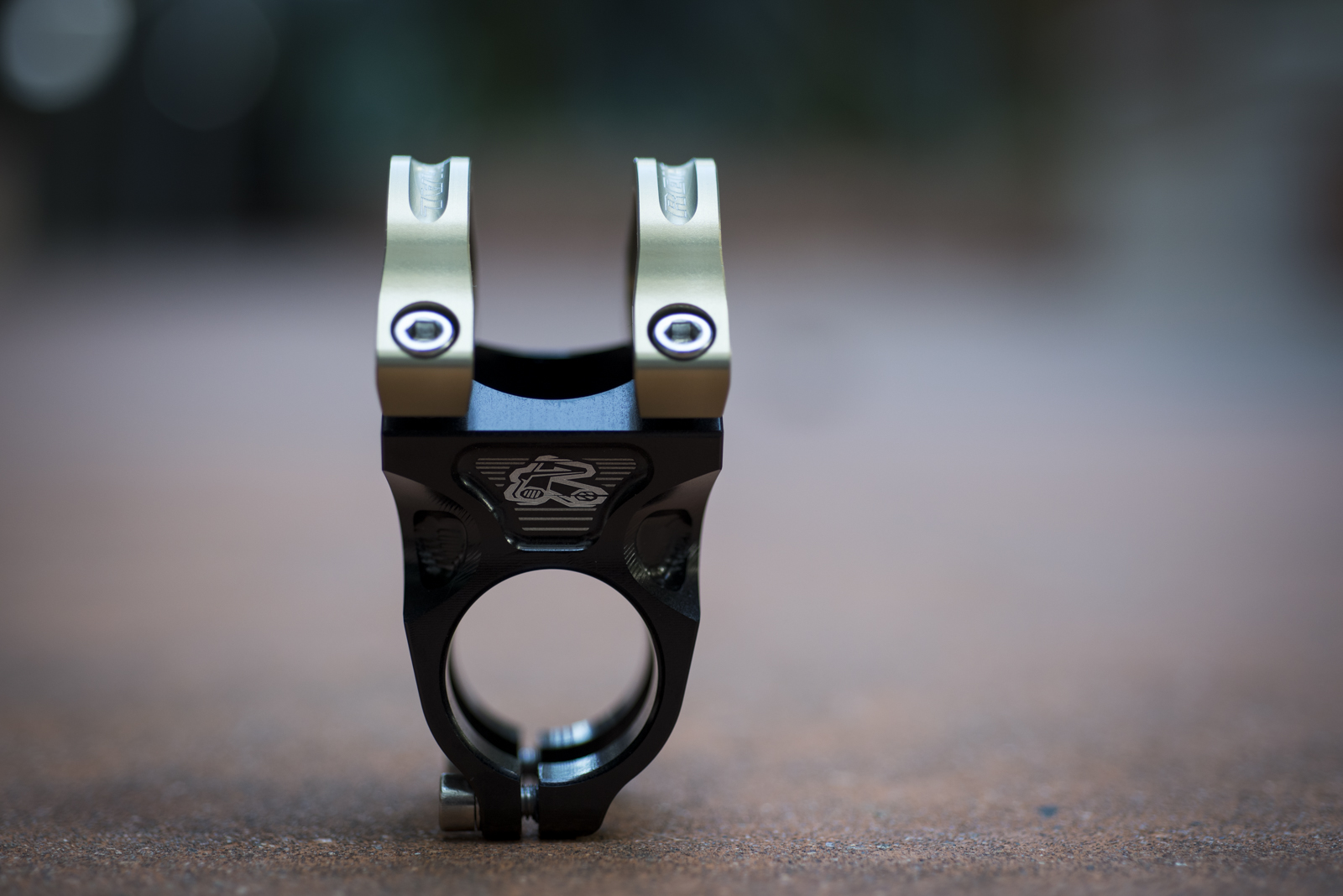 The new Apex stem is pretty exciting. First and foremost, we can’t think of a single MTB manufacturer that offers the same stem in six different lengths. That isn’t the only thing that’s worthy of mention, but we are impressed by Renthal’s effort to make something for everyone. It’s evident in their other products as well. Anyhow, right away, your eyes will be drawn to the gorgeous machine work, and unique look. At a scant 127 grams, there is little excess material to be found.

Sturdy hardware and the two piece face plate are refreshing. The Apex stem uses a 240° clamp. They claim this allows them to trim down the stem a bit. We also like the zero gap lower pinch bolt approach. On the two piece face plate, when you mount the stem, you bolt the lower clamps flush against the stem itself, then apply torque to the upper clamps accordingly. This helps ensure an evenly distributed load and proper alignment, all while quieting things. Another nice, subtle touch are the laser etched graphics that show you which end is supposed to be clamped flush. 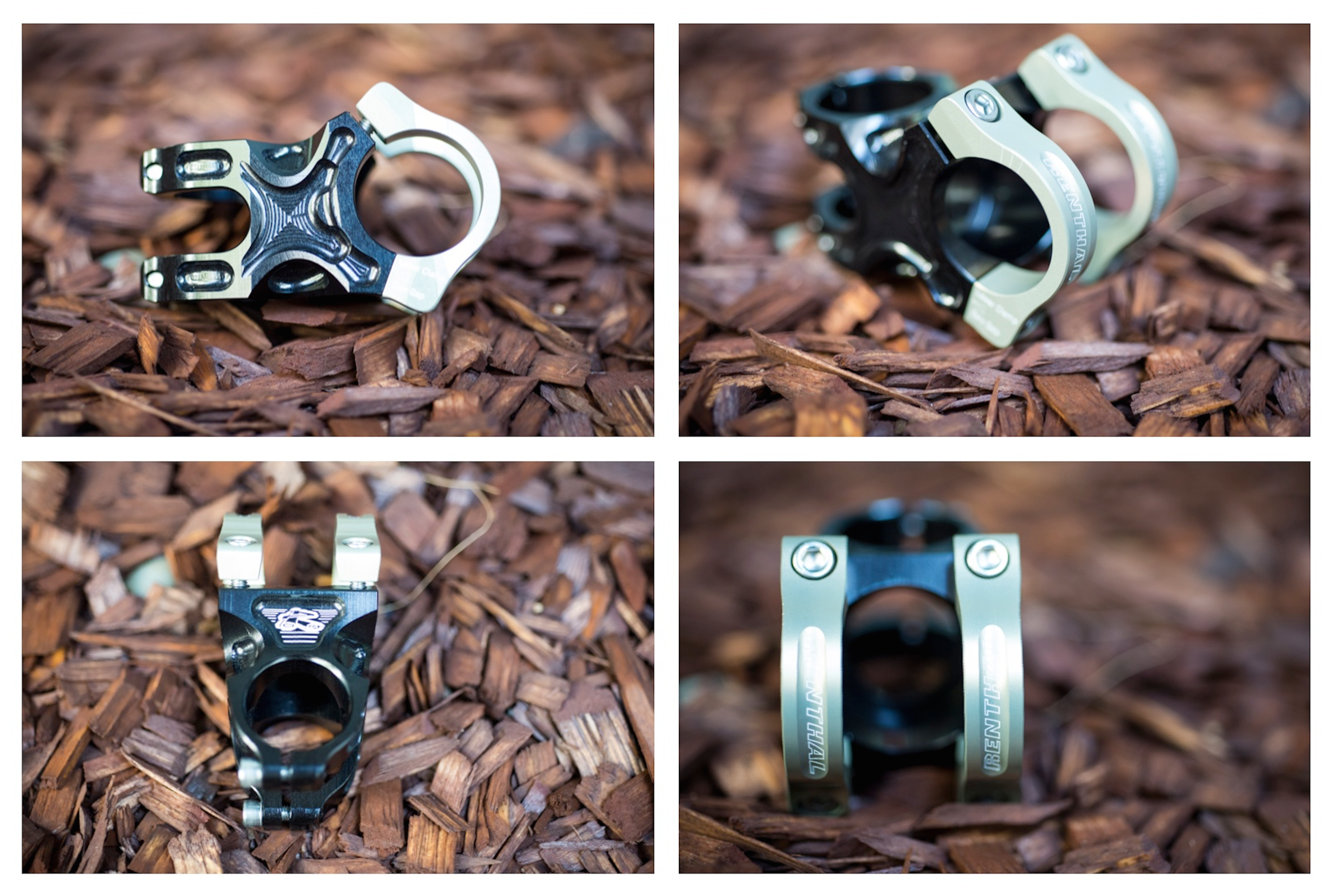 Speaking of noise, we have to give credit where it’s due. Coming off of the older Duo stem, we liked it’s overall design, but it made a racket. Regularly, we had to pull it apart and grease the bolts, and the interface between the upper and lower plates. The new Apex stem has nicely remedied this. It doesn’t make a peep – since installing it on our bike we haven’t had to fuss with it at all.

Aside from being quiet, a stem has a relatively thankless job. All it has to do is be relatively stiff, and not slip. We’ve found the new Apex was up to both tasks. With a reasonably wide(46mm) bar/stem interface it was plenty stiff, and the high grade hardware never had us fearing that we’d round out the bolt heads. Last, but not least – did we mention, the Apex just looks amazing from an aesthetic standpoint? 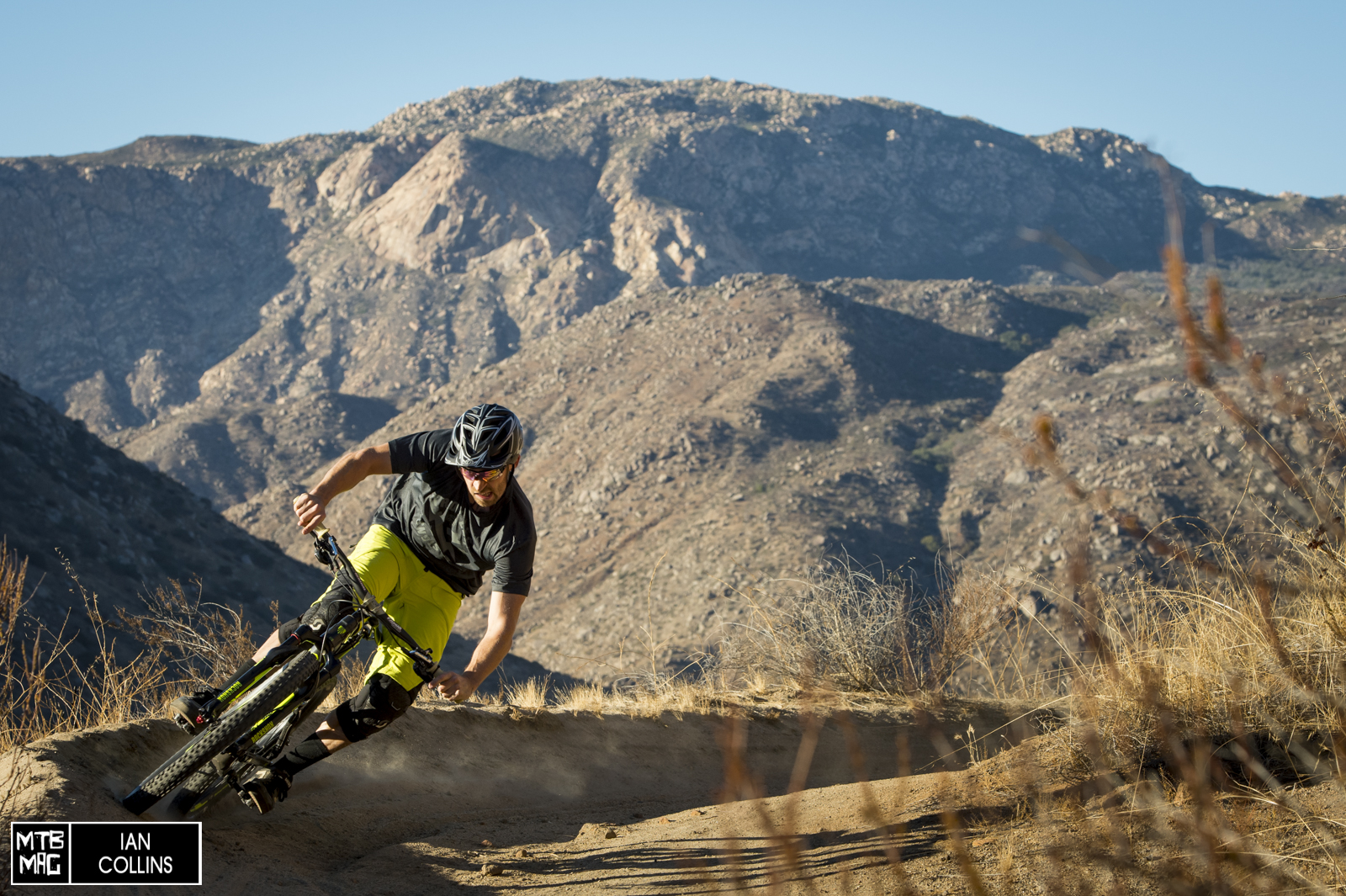 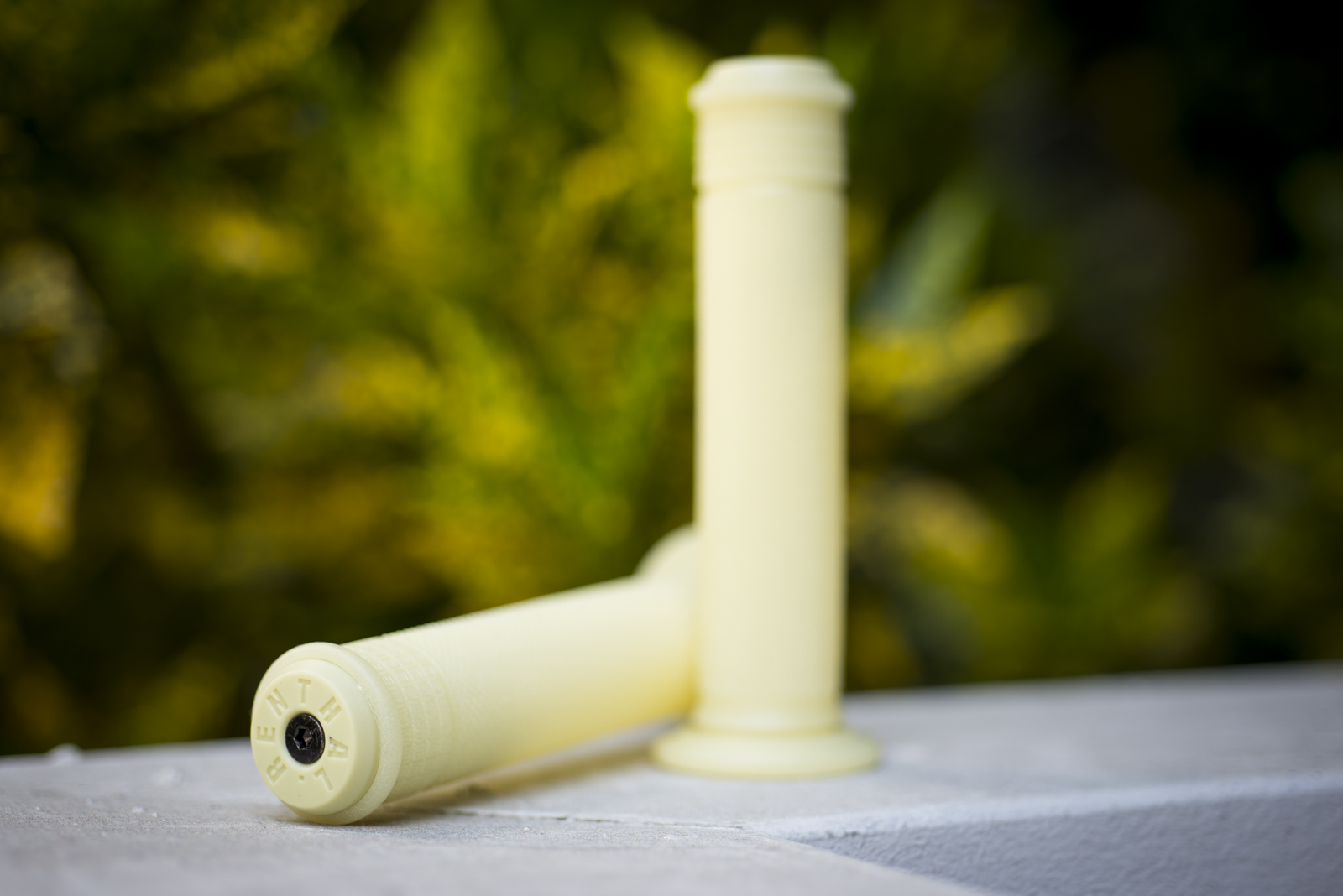 Renthal’s push on grip has been around since they jumped into the cycling game, and it has some crossover features from their wildly popular moto grips. We’ve actually been fans of this grip and used it in the past. When we inquired about testing the new bits, Renthal mentioned that they’ve updated the bar plugs slightly to interfere less with the rider’s hands. Overall, the diameter of the plug just came down a bit so if you tend to ride with the butt of your palm on the outer edge, the hard plastic won’t be digging in. They also updated the hardware to be secured with an allen key in lieu of a phillips head screwdriver. Nice, subtle updates, and good to know that they listen to consumers. Let’s see how the grips fared.

The chart above outlines the properties of each available grip. Available in 4 compounds, we chose to stick with the Kevlar compound. First off, in terms of mounting, there is a reason that clamp on grips are popular, and while Renthal does offer a lock on option, we really prefer the feel of a push on grip. The thinner design is personal preference as are most design elements of grips. It’s nice not having any metal hardware ever digging into your hands, and the fact that the grip is entirely comprised of rubber (instead of a co-molded rubber/plastic design) means that one can ride a thinner grip and enjoy more cushion while still getting a positive feel from it’s low profile. 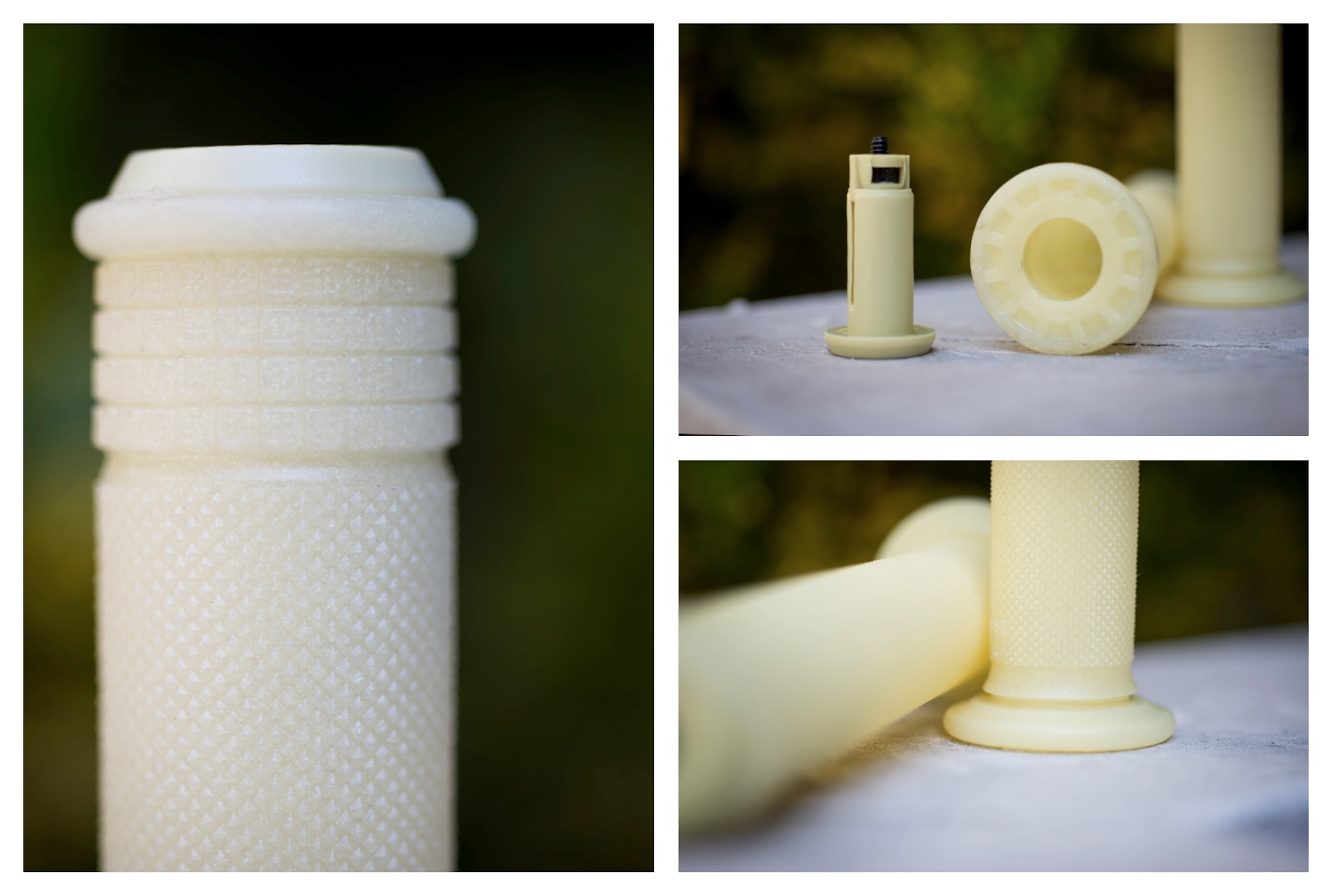 Suffice to say, this comes at a cost. Well, in a sense…push on grips are actually about $15-$20 cheaper in most cases. The cost comes with the fact that they can be a pain to install, and once installed if you choose to use grip glue like we did, they’re pretty much rendered useless once you remove them. Anyhow, we used grip glue and wired them down moto style on the outer edges. Grooves are molded into the grip to accept these wires. Since we’ve installed them, the grips haven’t budged or shifted in the duration we’ve used them, and while we’ve had them for only a couple of months, we’ve owned this grip in the past and can attest to their incredible durability. If you are a fair weather rider these are great and you could run them gloveless quite easily(once they break in). However, as their ergonomics are relatively smooth, we wouldn’t recommend riding them in the rain without gloves.

All in all, we’re really impressed with Renthal’s new cockpit offerings as a whole. They work together nicely, but as individual products they’re all top notch as well. The bar, like it’s predecessor feels just right, only it takes the edge off a bit better. The stem did an excellent job, and we’re floored to know how many sizes they are available in. While grips are always very personal, we warmly welcomed the subtle updates and really love their overall feel.

With all three products, we were extremely hard pressed to find any shortcomings. If we had to be super picky, it’s worth mentioning that the bar plug hardware was a bit difficult to get fully tensioned. Also, some may complain that the stem is only available in a +/-6° rise/drop. We feel that the large array of lengths available shadow that minor quip tremendously though. 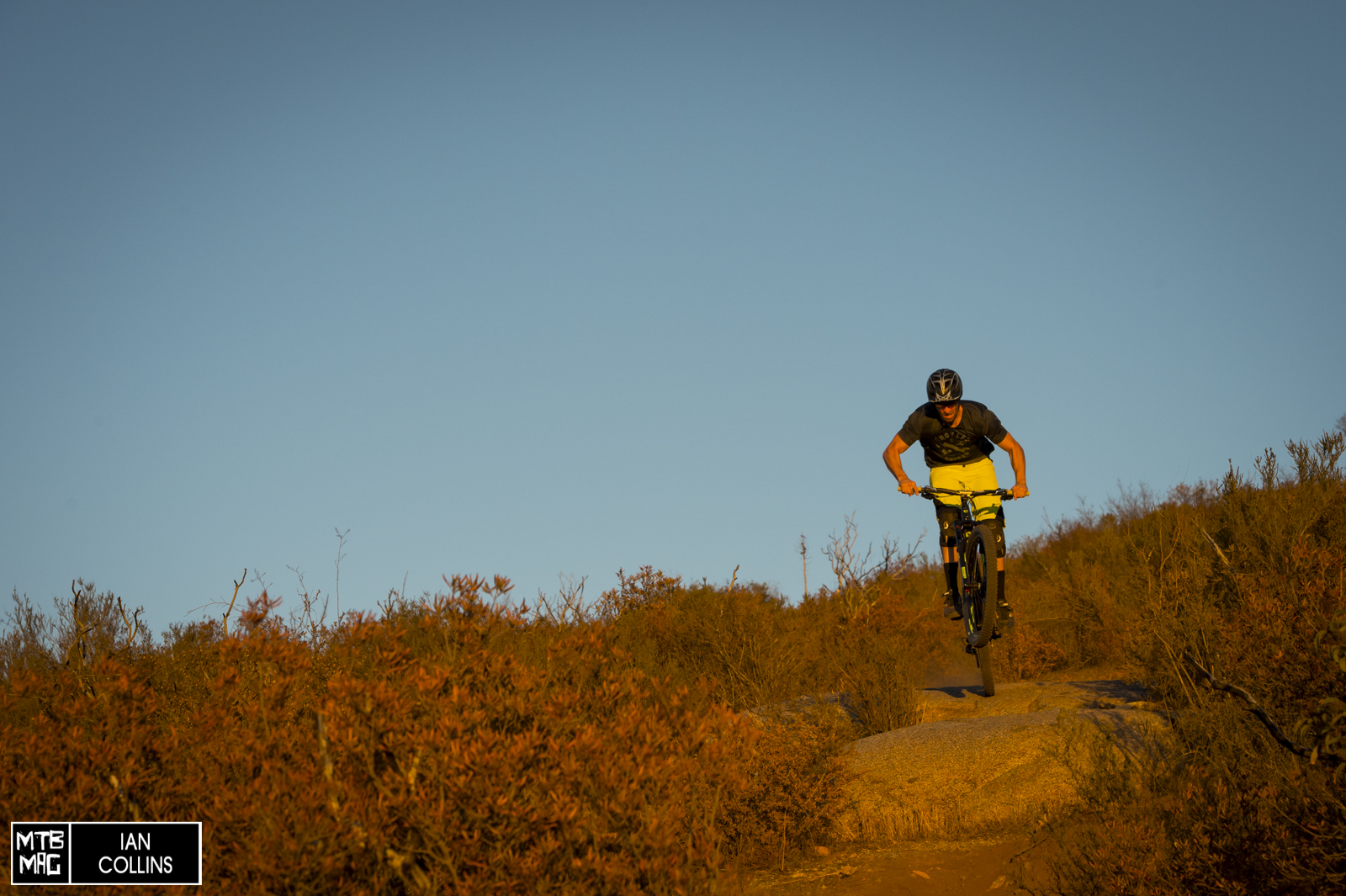 After just a few short years in the cycling industry, it’s nice to see that Renthal has already been listening to consumer feedback and making the pertinent updates to current products as well as expanding their line by offering cutting edge bits like the carbon bar. As poorly designed carbon fiber bars put lives at risk, we appreciate that they took their time with development and didn’t rush into the market. Renthal’s ethos and legendary reputation for quality in the motocross world crosses over into their cycling products and their commitment to the sport. We’re stoked to have them making mountain bike products and bringing a little bit of their moto flavor along with them.