Way back in the day, on any given weekend involving chairlifts and DH bikes, chainguides would almost certainly be the cause of headaches at some point. Fortunately they’ve improved a great deal, and with the advent of clutch derailleurs, these days they don’t necessarily have quite as heavy a workload. Above all, perhaps their most important duty is simply protecting the chain and chainring from impacts on the trail. It’s ironic that the chain retention duty became less relevant right around the time that most manufacturers had finally figured out how to perfect that aspect. Anyhow, E*Thirteen offer a few different versions of their modular LG1 guide which includes boomerang, skid plate, top slider and lower roller; all of which are removable. We tested their flagship, carbon fiber version… 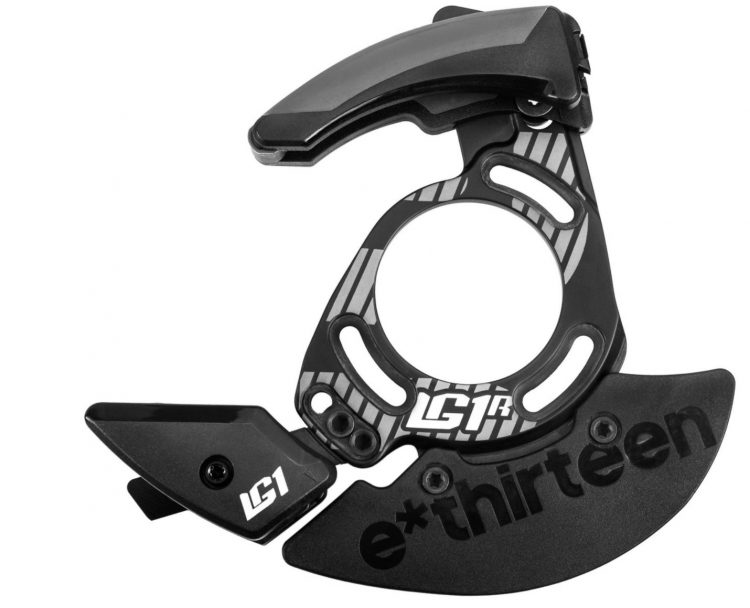 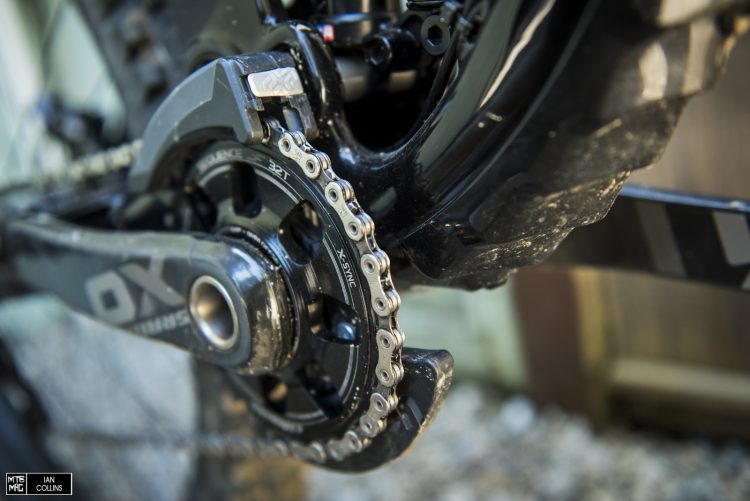 The first thing that struck us was actually how burly the boomerang was; this came as a bit of a relief as it bears a large deal of stress while supporting the skid plate under impact. The upper slider is co-molded with soft rubber on the inside to keep noise to a minimum and it features a tool free system to open it up, making crank removal a breeze. As far as weight goes, for a full coverage guide 164 grams is really freaking light and you notice right away in your hands. 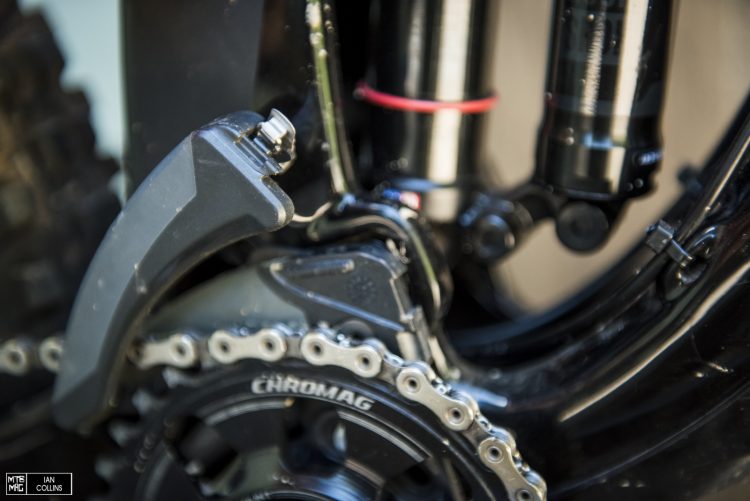 The bashguard itself is a polycarbonate that’s unaffected by lubes & cleaners so it won’t degrade or weaken over time. The LG1 Carbon guide comes with 3 different sized bashguards fitting basically whole range for 99% of mountain bikers (28-38T). We opted for the smallest of the three as we ran a rather small, but fitting 32T front ring in combination with the integrated 9-21T cassette that comes with the E*13 wheels we recently tested. As you can see below, the bashguard itself is relieved with honeycomb shaped holes on the inboard side. This saves weight and helps the plastic absorb the brunt of the load under impact so as not to transfer it to the boomerang or ISCG tabs. As far as setup goes, the LG1 comes with long and short mounting bolts as well as 3 spacers for the ISCG tabs. What’s unique to E*13 is that they use spacers as opposed to washers. This allows the user to make much easier inboard/outboard adjustments while the cranks are installed, thus providing a faster setup time. As for setting up the lower roller, there are two positions available for adjusting its placement depending on where your bike’s chain stay comes into play. 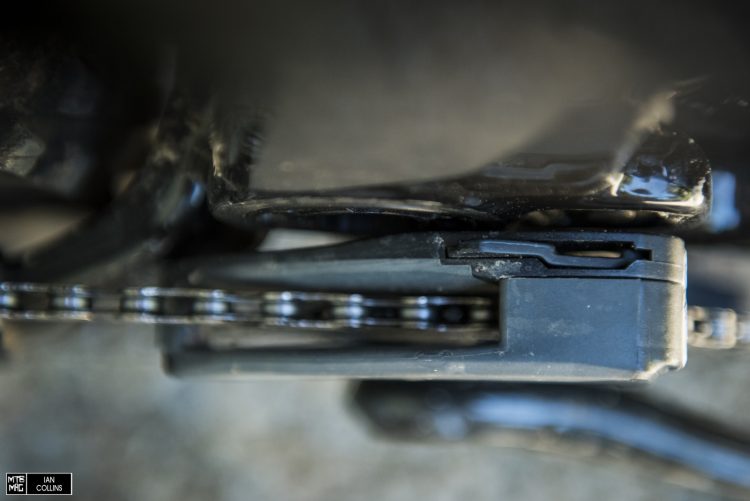 After a super simple setup, we were off…Immediately we were impressed by the lack of noise. If we opted to not use the lower roller, the guide didn’t contact the chain at all when pedaling regardless of which gear we were in. When in use, there is the inherent, but minimal drag of a 3rd pulley wheel (the first two being at the derailleur) as it rolls on a sealed bearing. Right away we realized that this is far and away the quietest guide we’ve used. The co-molded plastic is rather brilliant and its soft inner surfaces are likely responsible for the lack of chatter when things get rough. Because of that design, the chain is never slapping on hard plastic. Honing in on and pinpointing noise on our test bike is in fact quite easy as the bike we tested it on is freakishly silent on the trails. 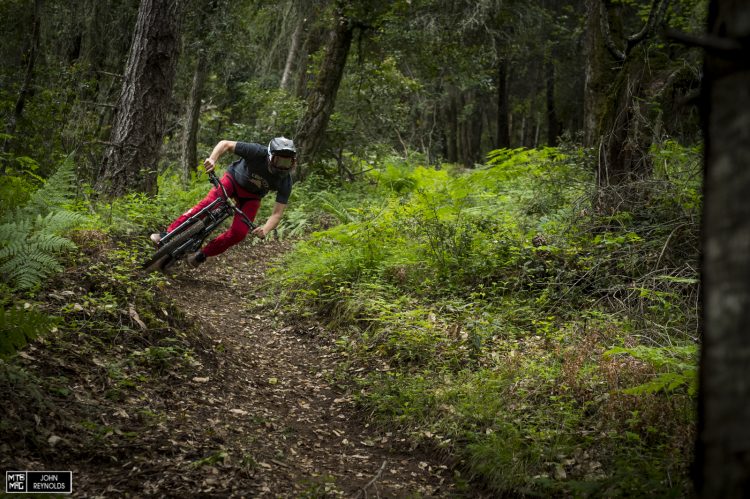 Over the course of 8 months, we’ve had a handful of strikes to the bashguard; admittedly more of them were log than rock as we live in the Santa Cruz area. That said, we had a handful of days testing at some rocky tracks in So-Cal as well as some big days at Northstar, Lake Tahoe; both of which are rock strewn. In any case, we’re confident in reporting that the carbon fiber boomerang held up like a champ. This was the one part which had us feeling slightly apprehensive, so it was good to put that to rest. As for the bash guard itself, it also held up well. We’ve cracked bashguards at the mounting bolts in the past, but after careful inspection we can report that it’s as good as new despite some scrapes, dings and scuffing.

In the grand scheme of things, a $199 chain guide is a bit of a luxury item, but riders who are less gram obsessed have two other LG1 models available which are much more affordable and feature all of the same parts, save the Gucci carbon boomerang. The takeaway point is that loads of adjustments, broad sizing, swappable parts & easy, tool free access for maintenance are standard on all LG1 guides every price level. 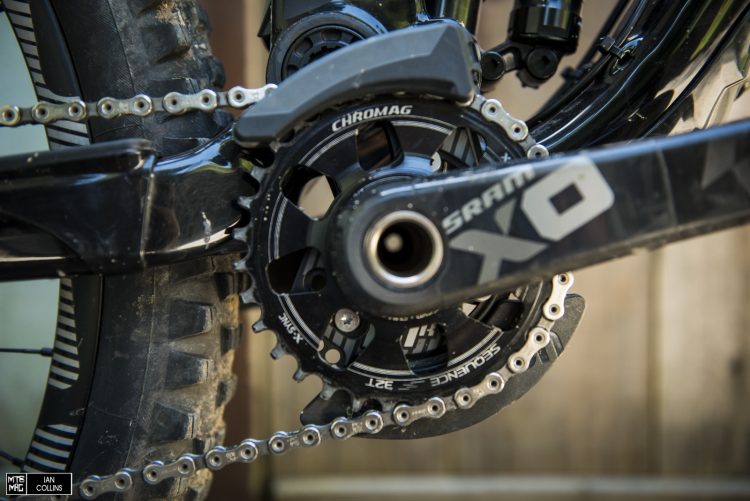 When we first met Dave Weagle around 2001 he was developing the first E.13 chain guides; they were well ahead of their time with the introduction of polycarbonate (in lieu of metal) for impact absorption. 16 years later, the brand is no longer being directed by DW, but the ethos remains the same, with simple “why didn’t I think of that” solutions increasing their product performance levels and consumer friendliness all the while…