At Crankworx this year, e*thirteen pulled back the curtains on a new line of cockpit parts – namely a range of handlebars and stems. This is of course in addition to their sprawling line of components that ranges from tires to wheels to drivetrain parts and dropper posts. Anyhow the handlebars are offered in 2 aluminum versions and one carbon fiber version, tested here. There are two stems – the Base and Plus, both of which feature 35mm clamps, the latter of which is in test. Here’s how the combination has worked out thus far. 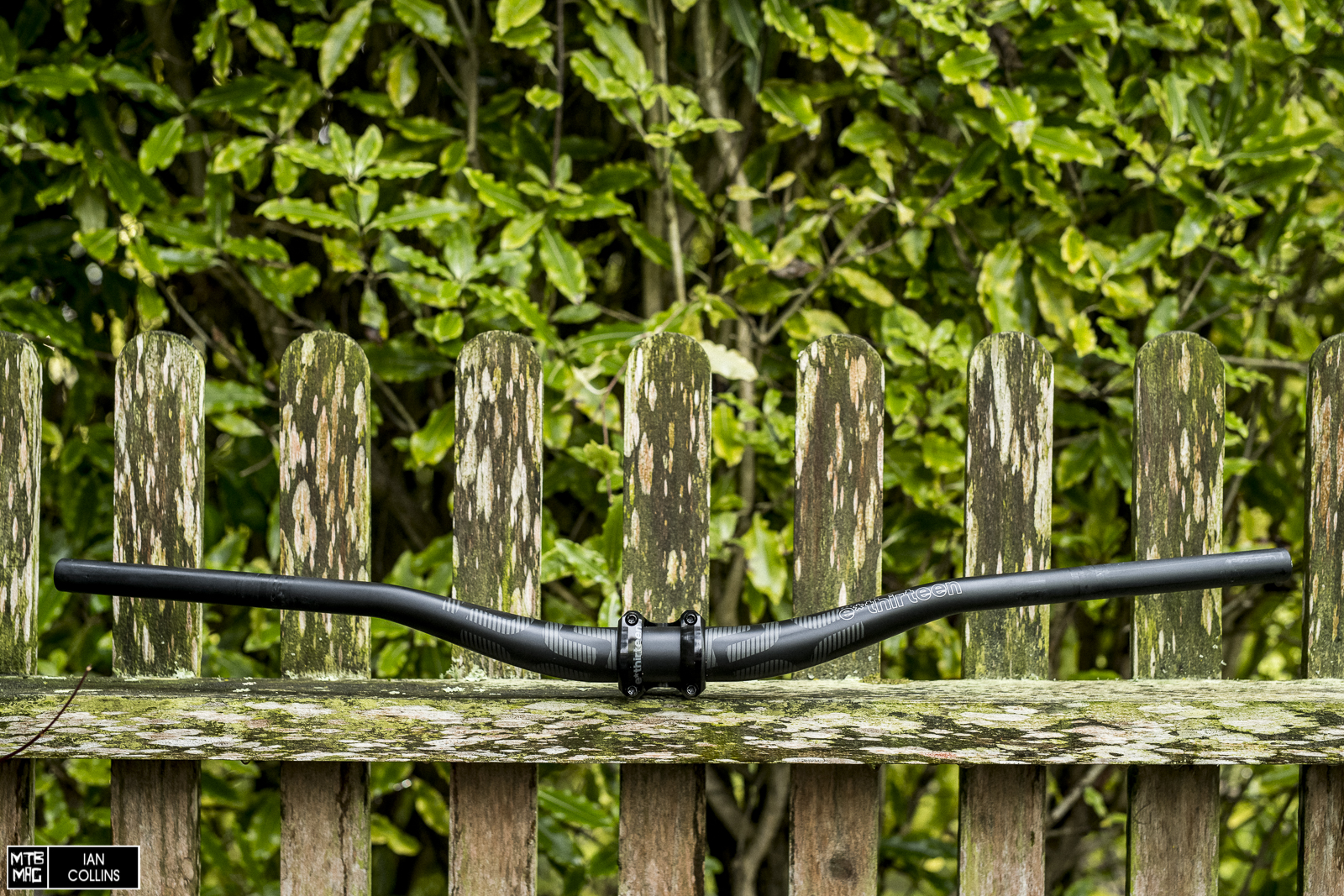 9 degree upsweep and 5 degree backsweep are pretty familiar, and to me they are very comfortable numbers. As I tend to like a fairly tall front end, I opted for the 35mm height. 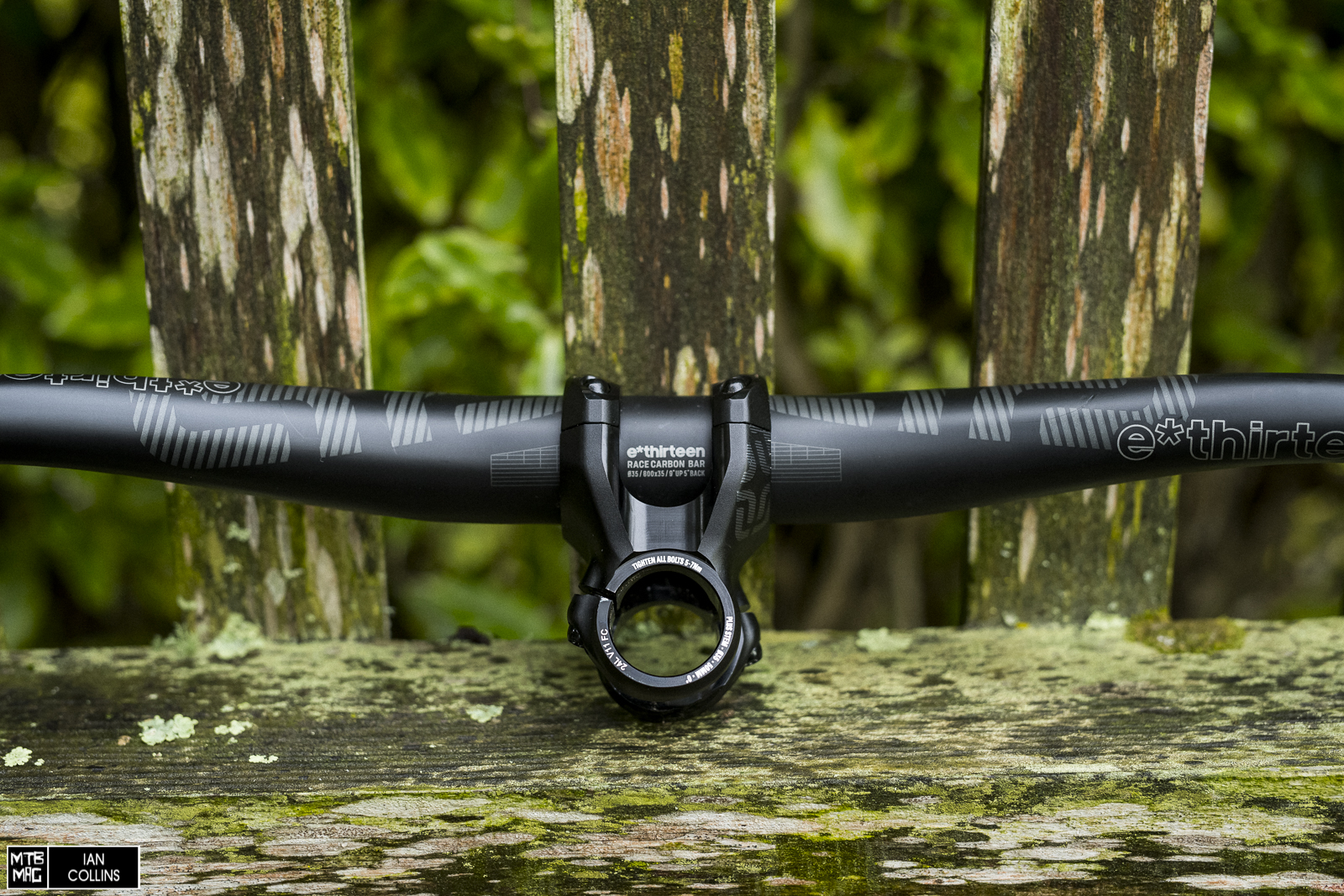 The graphics are mainly for aesthetics, with a small bit of function sprinkled in there to line up with the stem’s hashmarks for sorting your handlebar roll. Visually, the graphics are bold, but not garish – you can also get a sticker kit for color matching, should you desire. Looking closely at the highlights and shadows on the handlebar above, you can see that the shape is not perfectly round – there are some angular lines that are purpose built for taking the edge off. 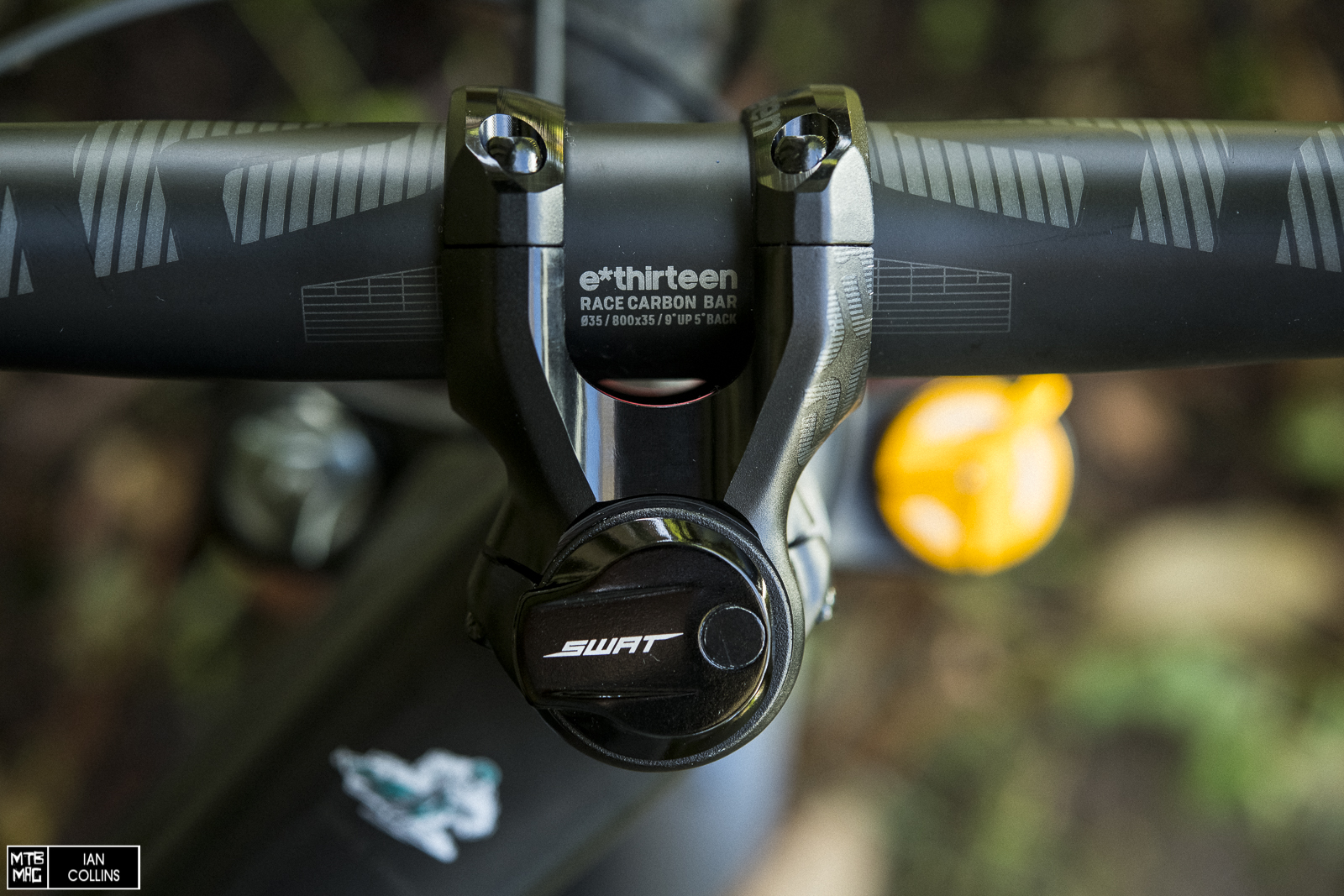 With a 58mm clamping surface, the Plus 35 stem has lots of purchase and a broad stance, which helps resist flexing under load. The combination of matte, shot peened graphics and sleek polished sections is easy on the eyes. 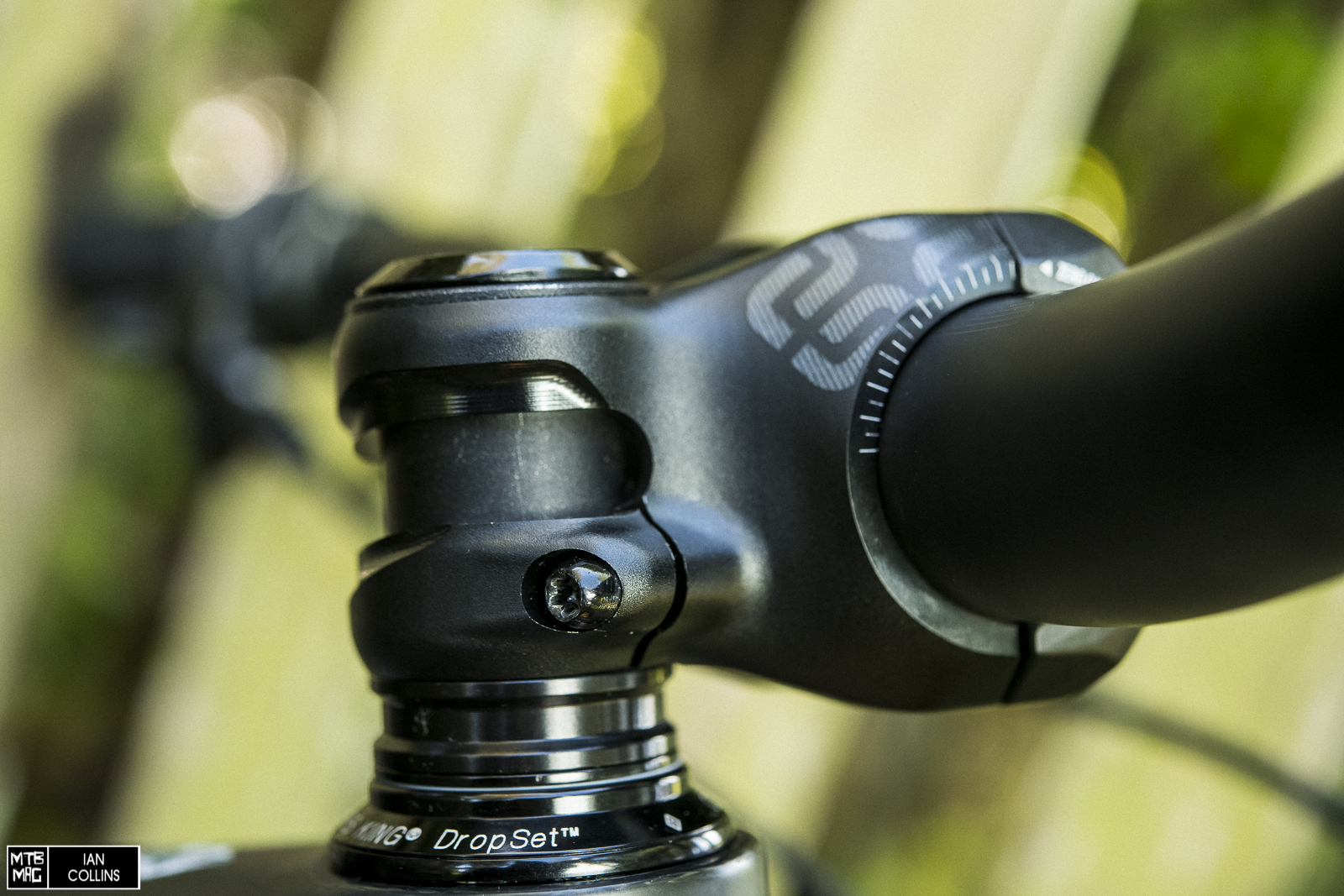 Personally, I really liked the idea of Torx (T25) hardware on the stem and would love to see more companies adopt that in the future. In addition to that, the shape of the clamps on the steerer are sleek and rounded off to prevent banging up your knees. 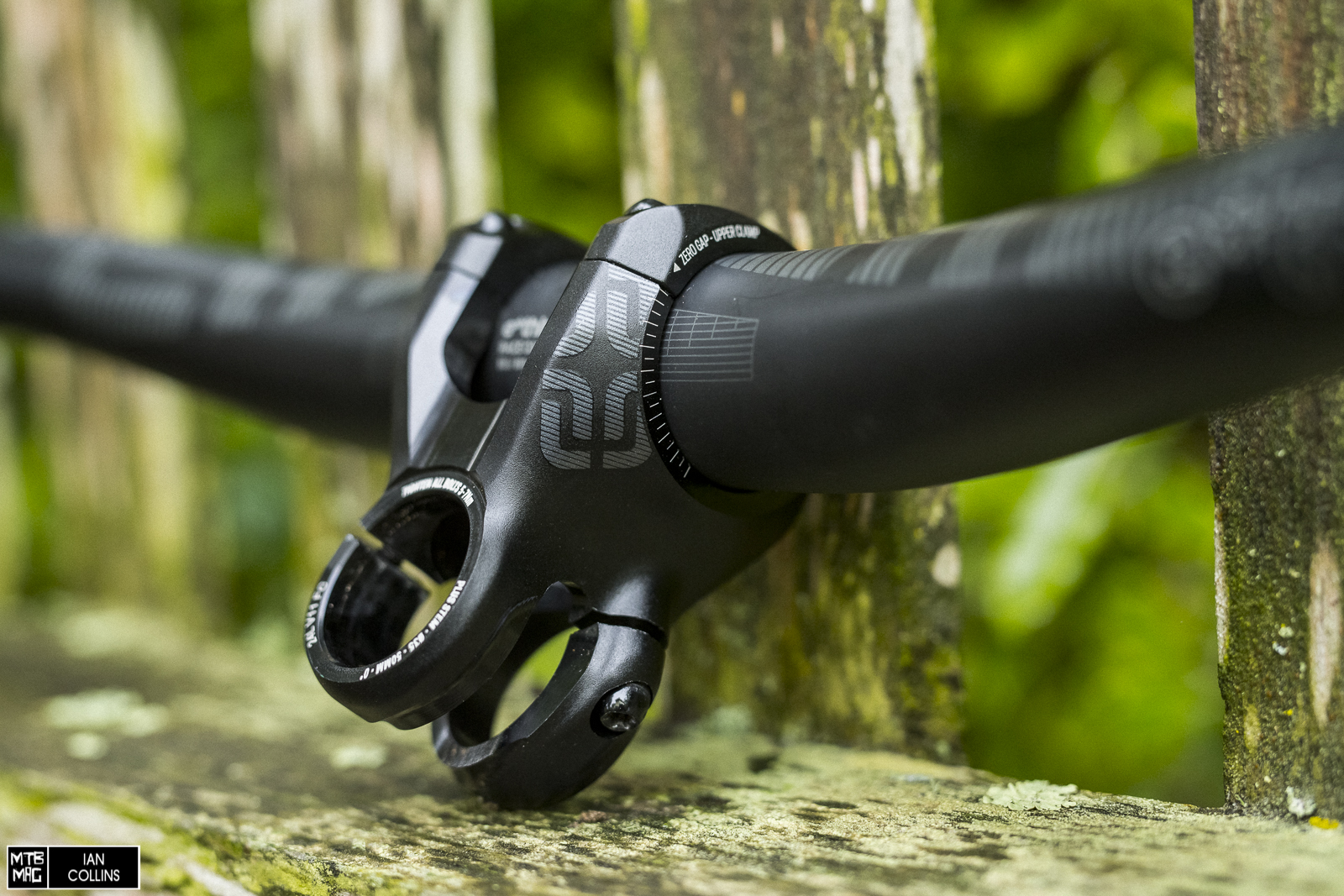 Lastly, you can see the zero gap upper clamp as well as how the hash marks line up with the graphics on the handlebar to set side-to-side placement as well as roll. All in all, the bar and stem have a clean layout and nice aesthetics throughout.

I felt at home on this combo right away as the geometry and shape of the handlebar immediately became an afterthought – just as it should. This was likely due to its comfortable sweep and the total lack of quirks, aesthetically speaking. As far as how compliant it is, that is always difficult to gauge with any sort of reasonable, calculable measurements. Most of the handlebars that I’ve ridden that were too stiff were 35mm and aluminum. Conversely, most of the handlebars I’ve ridden that were a bit too flexy were carbon fiber and 31.8mm. I’d say that the Race Carbon handlebar sat right where it should. Roughly speaking, it seems close, but perhaps ever so slightly stiffer than my Renthal Fatbar Carbon bar. In any case, it was plenty stiff in terms of steering, but took the edge off nicely. Coming in at 224 grams, it’s quite light especially given its width and height. 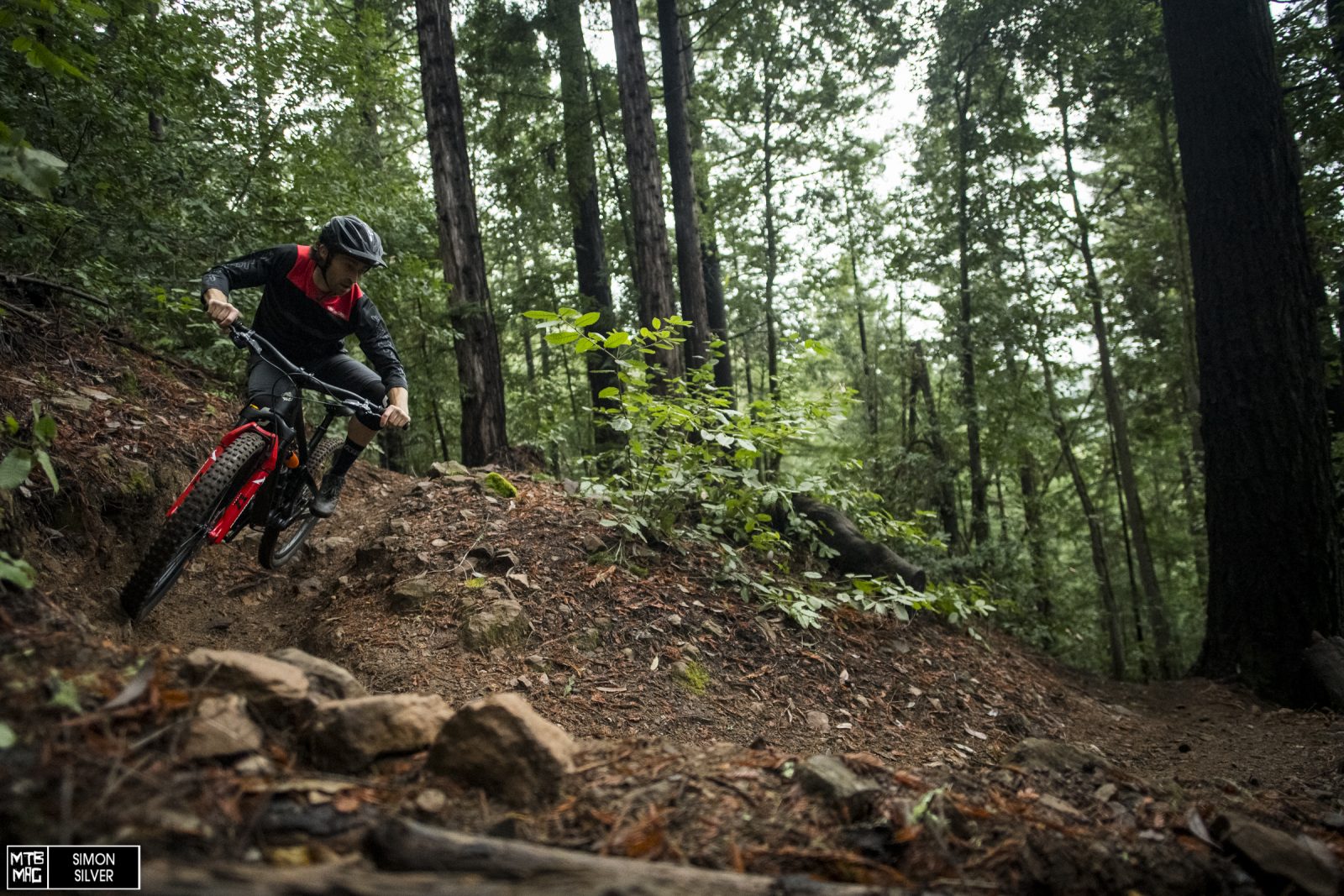 As far as the Plus 35 stem was concerned, it seemed rigid enough, and above all, it wasn’t prone to slippage on the steerer tube. For some reason, I’ve found that some otherwise very good stems can have problems in this realm. In any case, it could be due to the interesting layout where there is an angular cut separating the two clamps, which bite down on opposing sides. Regardless of why it worked well, it did…Even after a couple of pretty decent slams and crashes where I fully expected my bar to be cockeyed. In addition to being fairly utilitarian and having a clean design I can appreciate smart simple features like the rounded edges to make it easier on the knees.

In summary, I’ve been really enjoying the e*thirteen handlebar/stem combo. They’re simple, utilitarian parts that come in at very good weights and at prices you’d expect. Most importantly the strength, comfortable sweep numbers and ride quality is there. It’s also a bonus that e*thirteen seemed to spread out sizing and material options nicely to offer a good range for riders with different needs and budgets.

[Video] Sound of Speed: Jesse Melamed in Pemberton BC