A few weeks ago, e*thirteen sent us a sample of their newly revised Vario Infinite dropper seatpost. Available in two lengths with each offering a 30mm range of travel adjustment within their respective size, they are available for 30.9 and 31.6 diameter frames. You could of course use a shim for a 34.9mm frame if you wanted to. Anyhow, as the Vario replaces e*thirteen’s seatposts of old, it is introduced along side a really slick new lever. As of late, we’ve been using said lever in unison with the longest travel version of the seatpost pretty frequently for a while now – so, read on for the review… 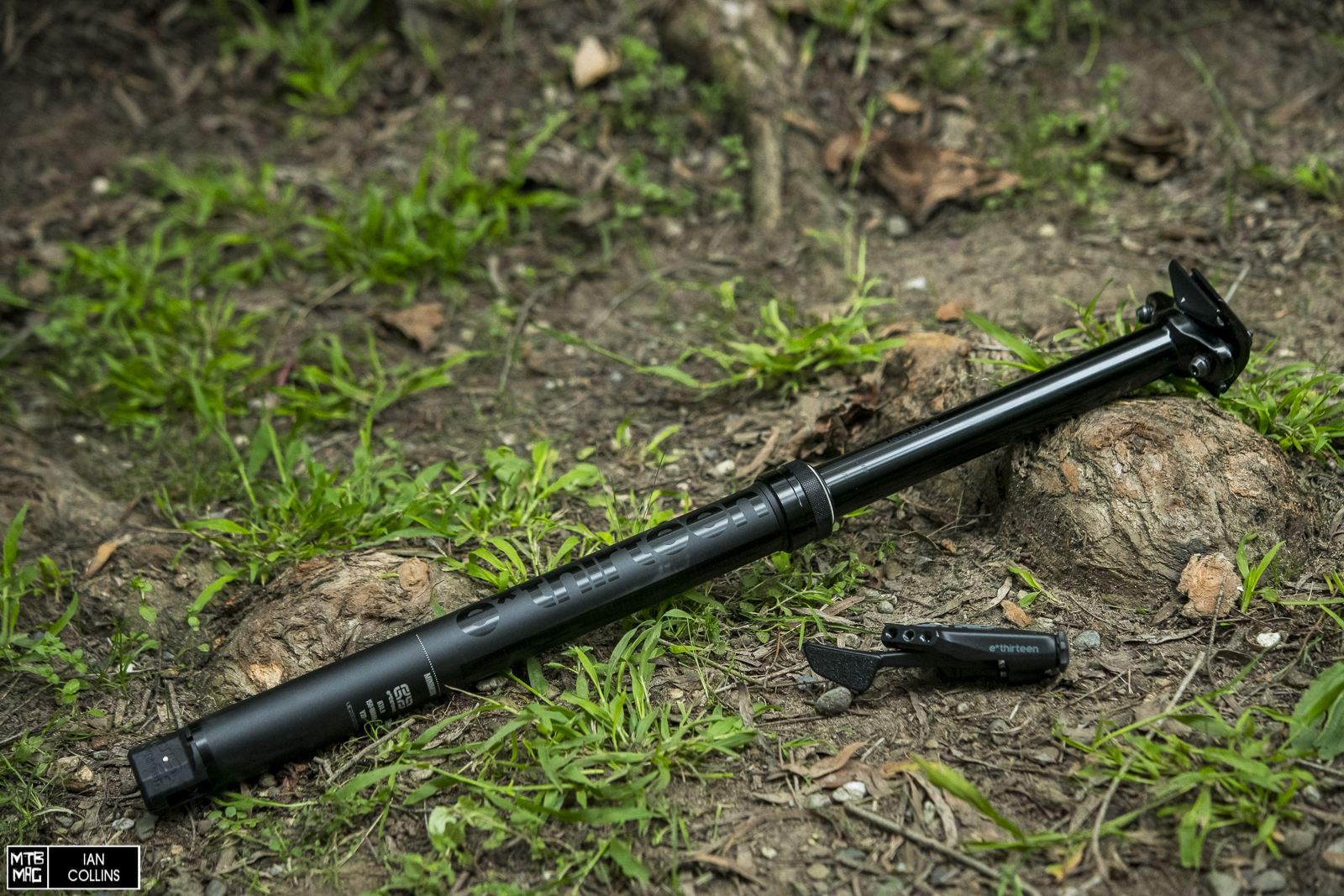 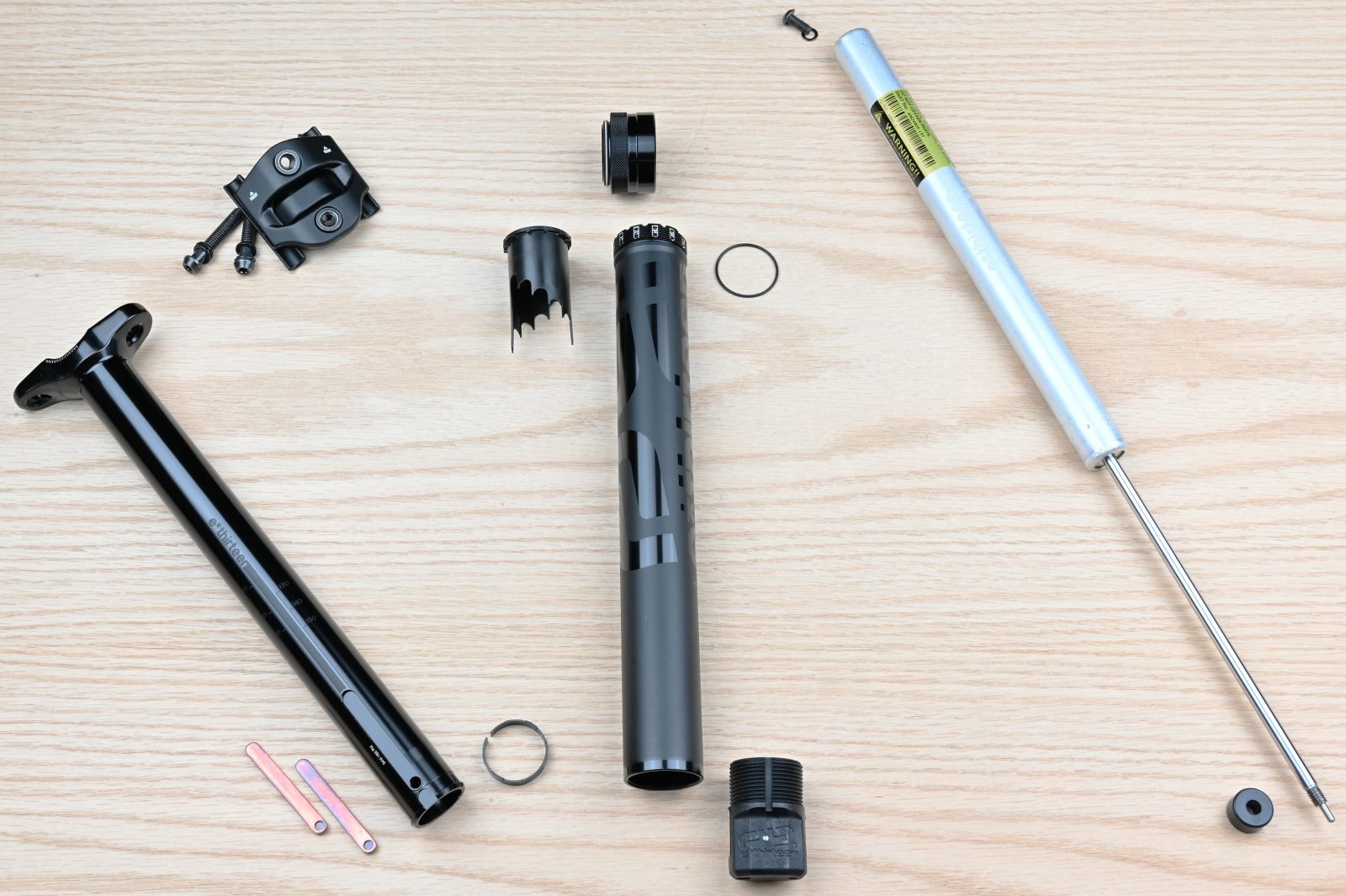 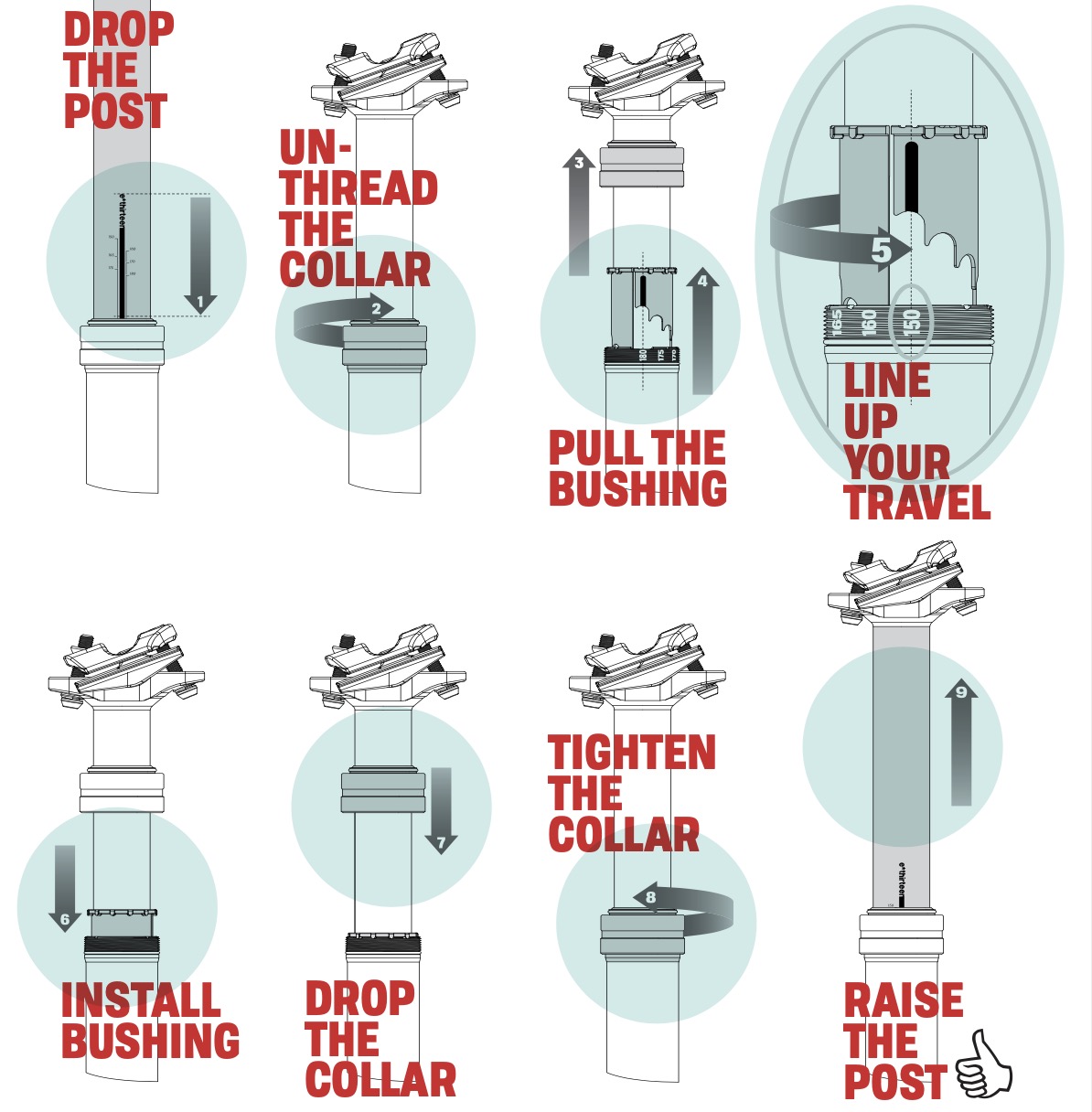 Perhaps the biggest story with the Vario seatpost is just how simple it is to adjust the travel. It’s a tool free, simple procedure as outlined above and only takes a few minutes. There are clear, but classy looking black-on-black indicators etched into the post’s stanchion to guide you through the 5mm adjustments within the post’s 30mm travel adjustment range. 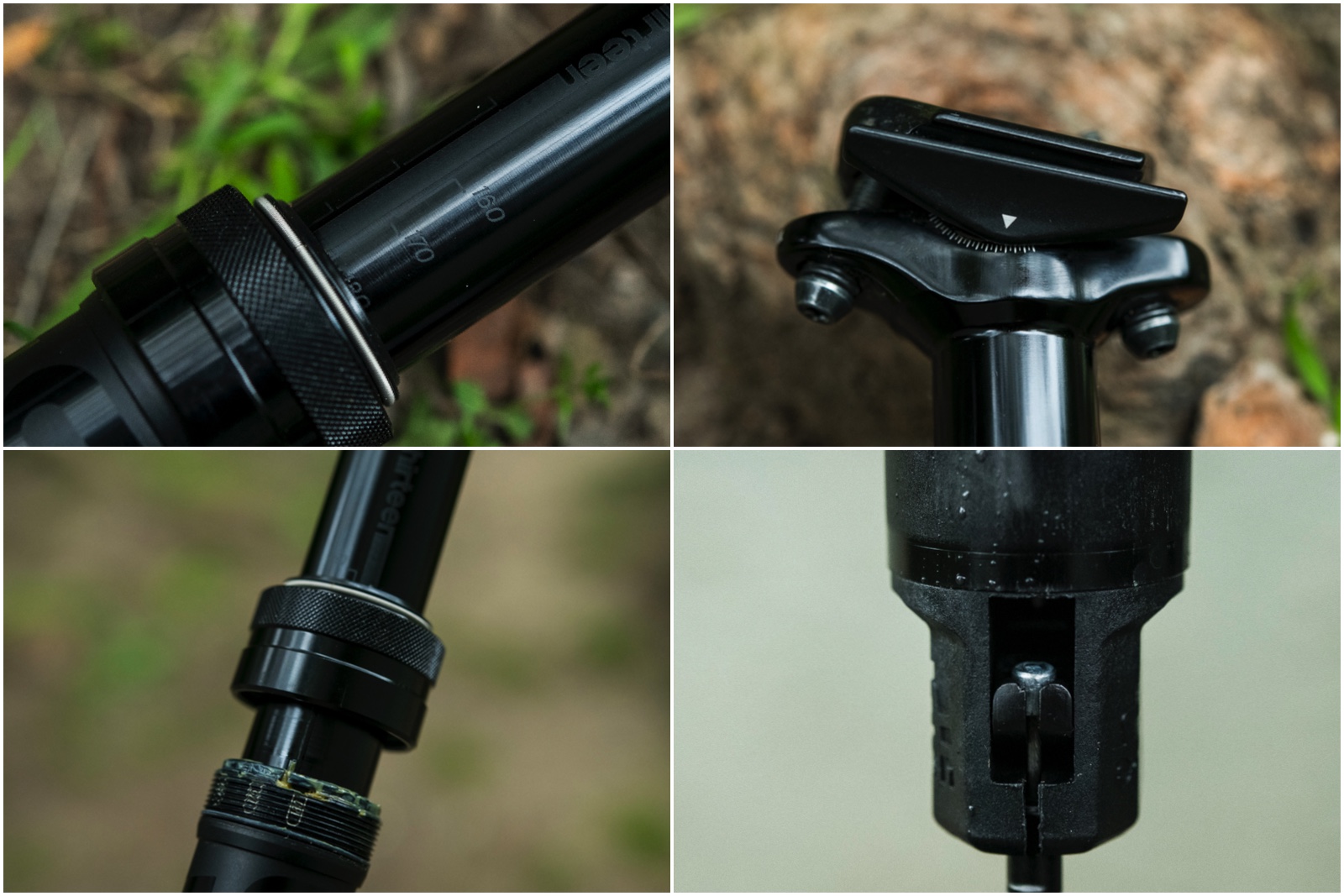 Clockwise from top left: The travel indicators are staggered from side to side on the stanchion above the collar. The Vario’s head is integrated and 3d forged with 28º of adjustment. A very cool feature is that a barrel is not required on the head of the cable – you can simply install a shifter cable as is. The knurled collar is very grippy and easy to unscrew by hand. 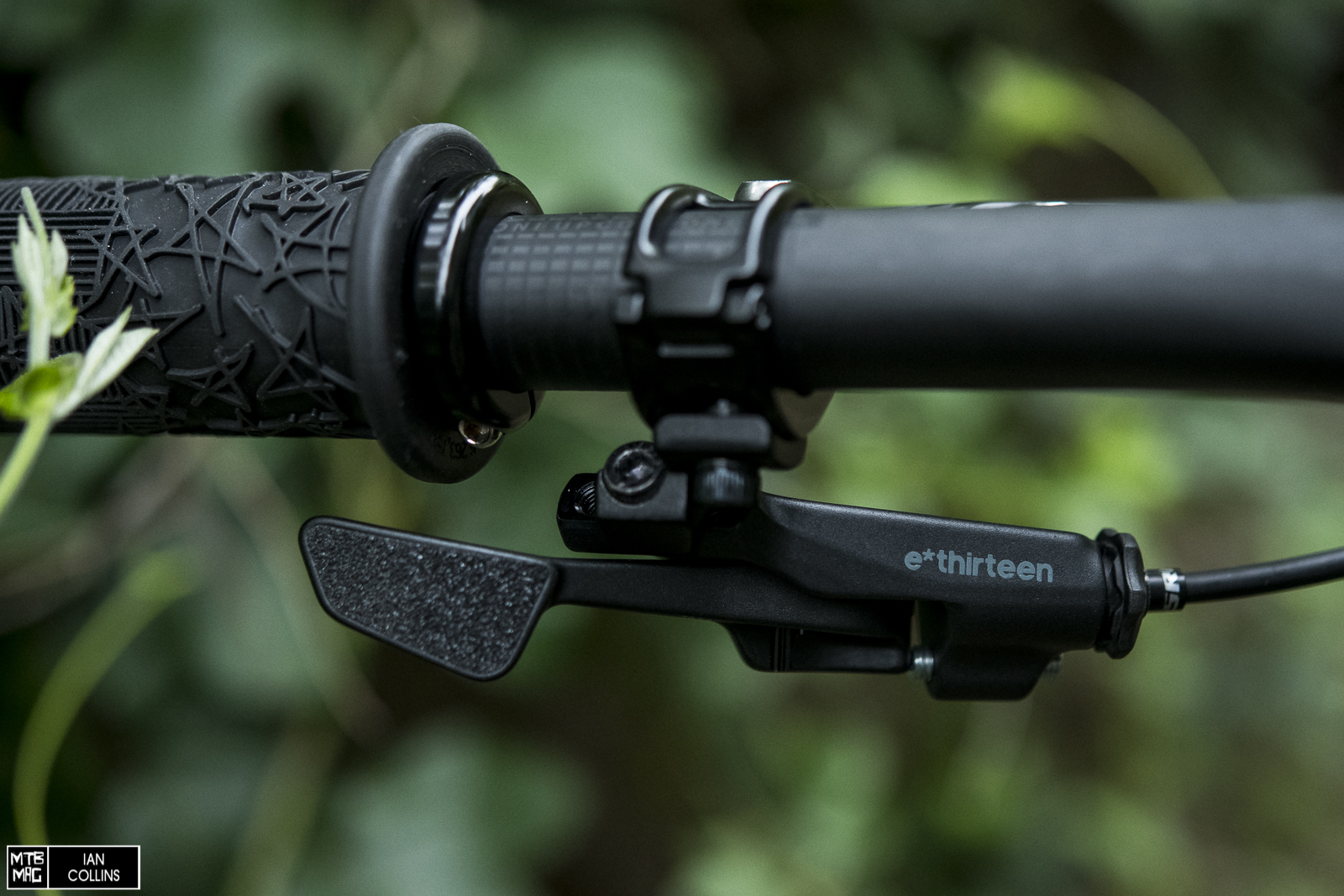 Alongside the seatpost is an all new 1X style lever. It comes with its own clamp, but works with SRAM’s Matchmaker and Shimano’s I-Spec. The body itself is quite big – enough so that it almost looks like a shifter. The barrel adjuster is wide, but doesn’t sit out very far, nice and low profile. 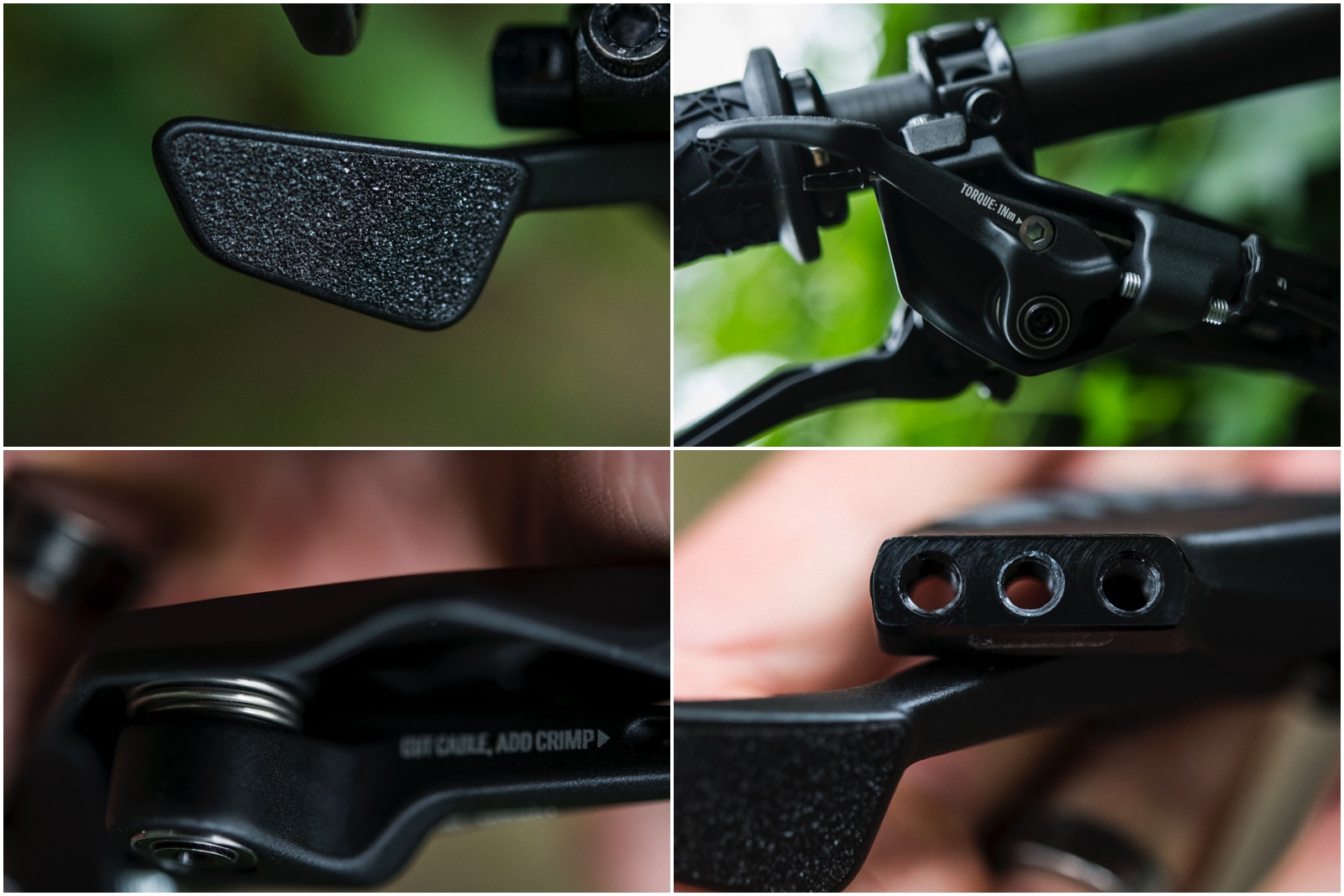 Clockwise from top left: while pros have been modifying shift levers with grip tape for decades now, e*thirteen was the first we know of to get the hint on a production level. Looking at the underside, the lever blade rotates on a cartridge bearing and there is a set screw to adjust your starting point. There are 3 separate inboard / outboard positions for the lever body. Lastly, the lever body has a spring built into it which helps fight cable friction and provide a snappy return, even if you’re two for lubing your cable – pure genius.

A very painless setup meant everything was dialed in after about 5-10 minutes. Threading the cable through the lever was seamless and right away, I noticed the lever has a really short throw, which I got used to and grew fond of. Mechanics aside and more on the ergonomic and tactile front, I’d rate the lever at a 10/10 – it’s seriously so good. The grip tape and lever paddle shape / feel are grabby and just right, respectively. The long set screw provides a great deal of adjustment for the blade’s starting position, while having 3 mounting positions give you plenty of room laterally. I wouldn’t rate the lever action itself as super light by any means as e*thirteen claims, but rather it felt pretty middle of the road. Despite its short throw, once I got used to the feel, I noticed it was possible to control the return speed by feathering it a bit. With that in mind, since the Vario operates with a pre-charged cartridge you can’t adjust pressure internally to make things faster or slower. Overall the return speed is on the slow side, which is fine with me as there is nothing worse than getting punched down there by your saddle. Remember the Specialized Command Post? My reproductive bits sure do. 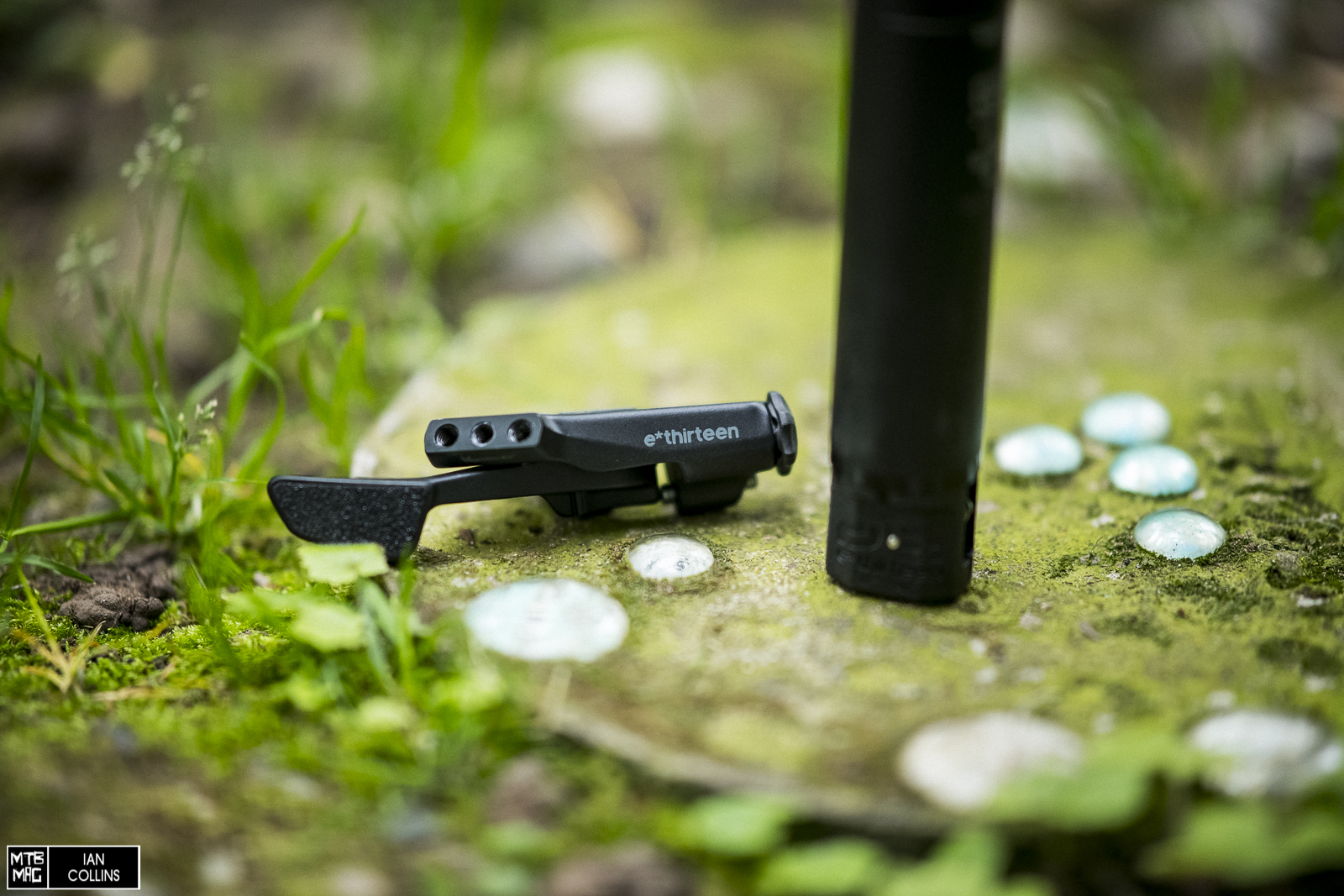 As far as some of the technical features go, I’m pretty long limbed and prefer a seatpost travel of at least 170mm, so while I dabbled with the adjustments to see how they worked, but mainly rode the Vario at its longest travel 180mm option. While like most riders, my travel adjustment will be a set it and forget it thing. That said, changing the travel is super easy and e*thirteen deserves some props for being the first to make this process tool free and easy to go back and forth without cutting bits and / or replacing them. In this regard the Vario is brilliantly executed. As far as the head is concerned, the fact that it was one piece helps prevent it from creaking. It boasts plenty of range in angle adjustment (28º) and a wide, supportive base that should help prevent bent rails. Lastly, just like e*thirteen’s new stem, the Vario’s head uses T25 torx hardware, which I think is better option than allen keys.

So far, so good – the performance of the Vario dropper has been solid. Time will tell in the long term. The only potential hangup could be, if you don’t like a return speed that leans slightly on the slow side, then it might not be for you. The range in travel adjustment is handy for personalizing things, and every aspect from a design standpoint is excellent, with the lever being the highlight. The weight and range are fairly middle of the road – certainly nothing to be scoffed at. As far as durability goes, so far there have been no signs of premature wear but we’ve only been riding it for a few weeks. There is and has always been, the slightest bit of up and down play, but hardly any side to side. In the time I’ve been riding the Vario, neither of these aspects have worsened, so it’s safe to say it’s the just standard room necessary for the internal parts to function properly with respect to their action. Regardless, e*thirteen will have you covered with rebuild kits for $25 when things wear down. All in all, a really good seatpost – it’s sturdy, straightforward, and features some new and unique industry first features, along with a killer lever.