With some carbon fiber wheelsets trickling down towards similar prices as a high end, custom set of aluminum wheels, we’re seeing more and more of them out on the trails; they are also more commonly spec’d on bikes at increasingly lower prices. These days it seems that carbon wheels are less of an over the top upgrade that only can be justified by those with deep wallets. In house brands (Bontrager, Roval, etc.) and a handful of mid-sized companies such as E*Thirteen Components all compete to find a place in the market. Competition is good – because, ultimately the consumer wins as prices come down. We’ve ridden a handful of carbon wheel sets ranging from $1,200 to almost $3,000 over the last couple of years. Recently we’ve been smashing along on a 27.5″ pair of the E*Thirteen TRS Race SL Carbon Wheels, which are aimed at the Trail/AM/Enduro crowd. 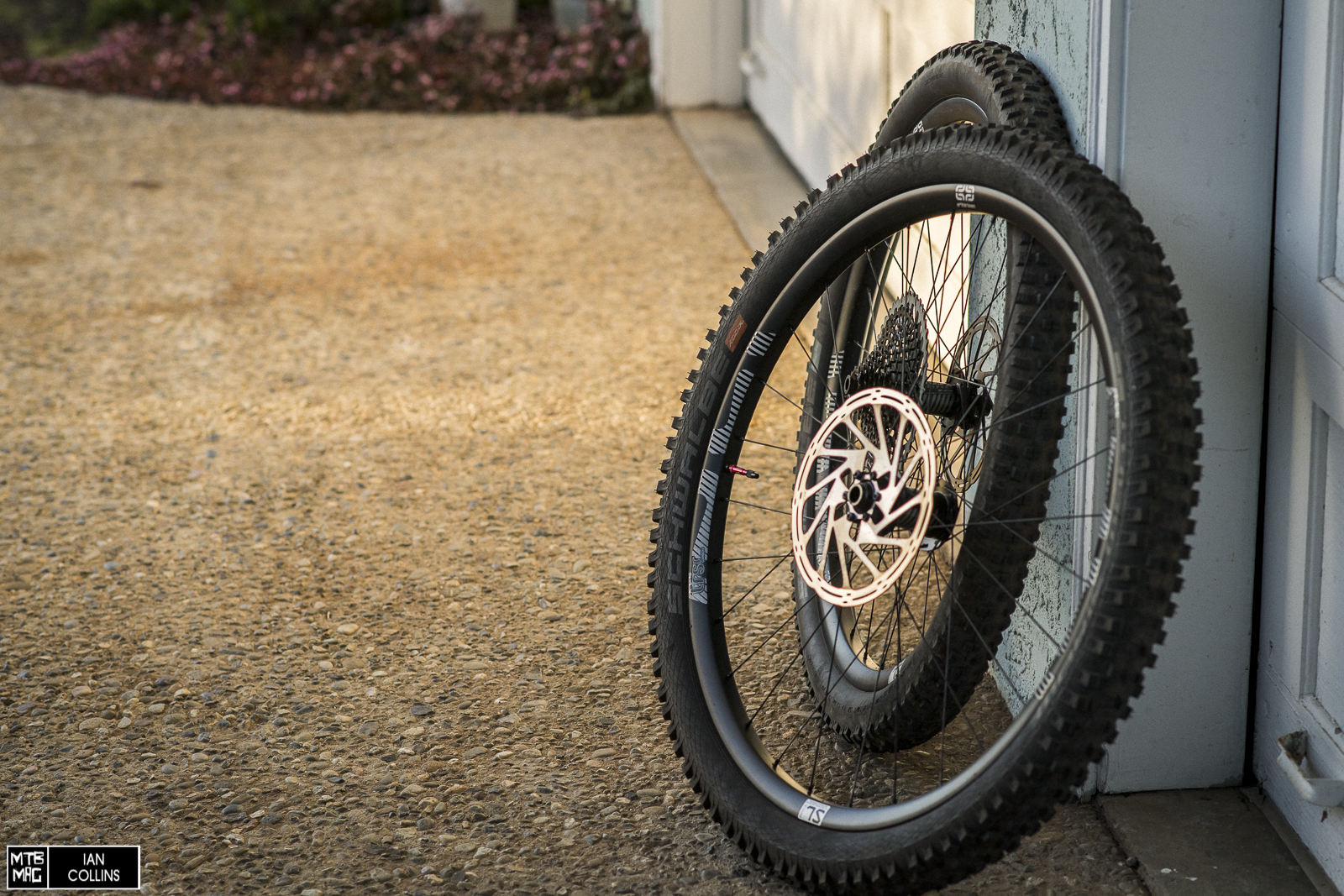 After a quick glance, these are a pretty straightforward, utilitarian set of wheels. The Northern California brand doesn’t employ any over the top proprietary methods to get the weight down to a freakishly low number. Rather, they use traditional J-bend, non-bladed spokes with a standard count, feature a rim profile that is tried and true (no pun), and don’t boast anything groundbreaking. Unsurprisingly, they come in at a reasonable price…Here’s how they’ve held up over the last few months on just South of the Bay from E*Thirteen’s Petaluma headquarters…

Nothing too far out of the ordinary here.  As an overview, there are 28 spokes laced 3 cross and the hubs feature a relatively fast engagement. The TRS Race SL wheels feature a standard profile for both hubs and rims, making for a fairly traditional wheel layout. 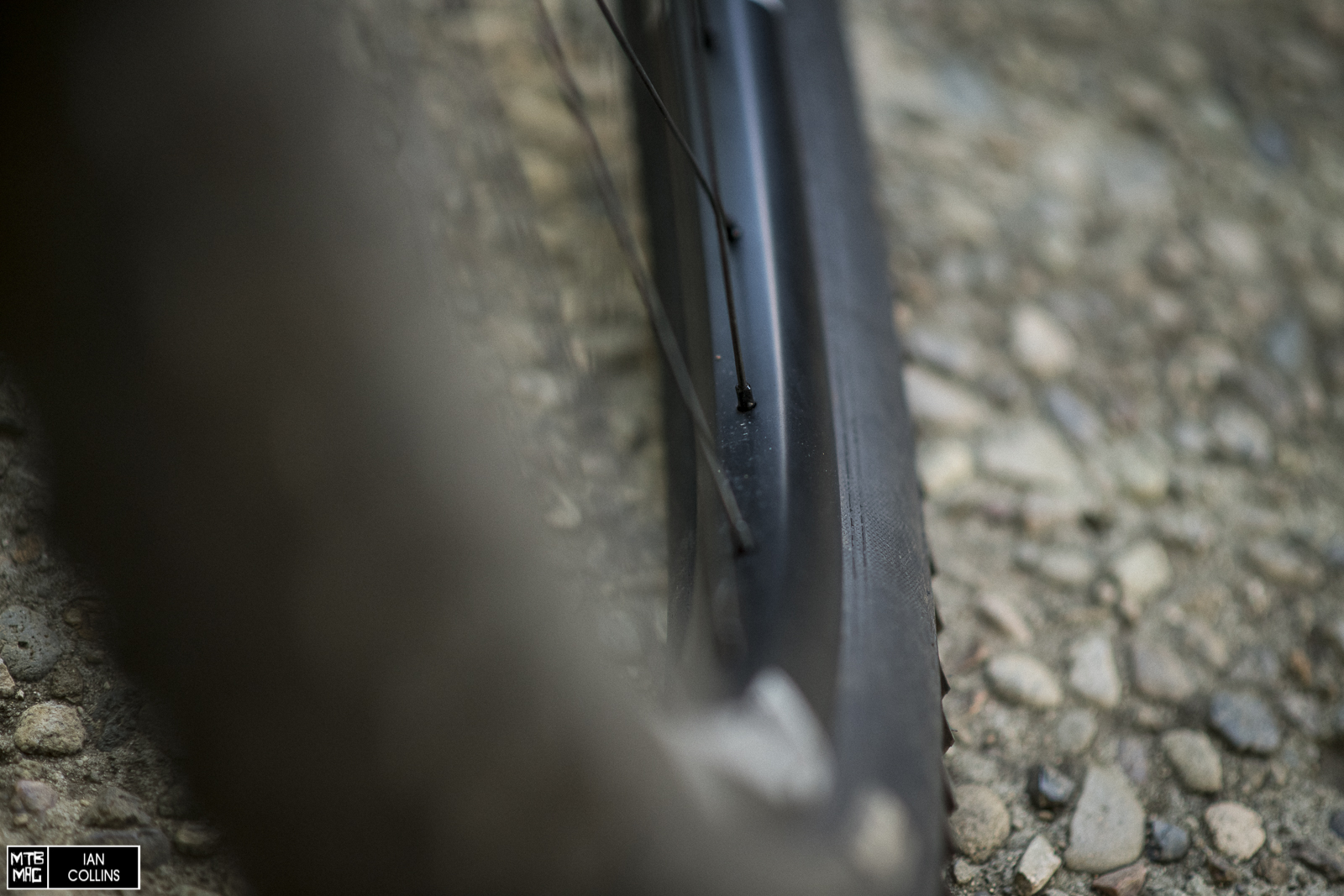 For the most part, the TRS Race SLs offered a relatively easy install. Like many other companies, E*Thirteen has opted for a hookless rim profile. The rims have a fairly pronounced drop center, which is in the middle of the rim, sometimes known as a spoke bed. Designing this area to have a slightly smaller diameter makes it easier to install and remove tires with tight beads. That said, we typically feel that rims like this can generally be slightly tougher to inflate with a floor pump, once they are on. Taking the right precautions, we didn’t really have any issues with inflation though. 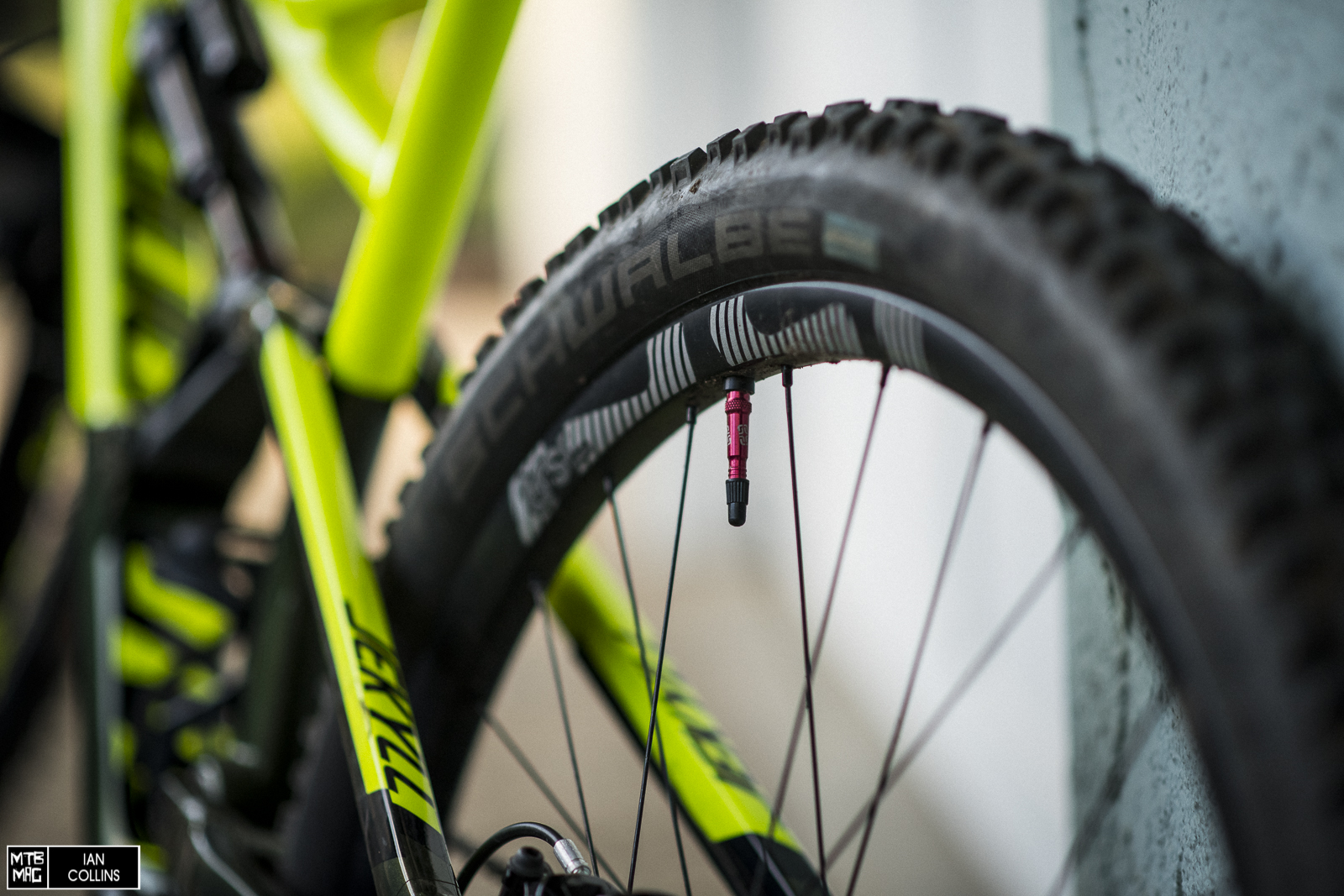 The E*Thirteen valves are actually quite genius – on wheels and a few others, we’ve never had a set get clogged with sealant. They offer a very high flow rate with a cap that can tighten and remove the valve core itself. With that in mind, the rim tape itself leaves something to be desired. With brand new tires, one of our wheels was a bit stubborn in sealing and we had a hunch that it was the rim tape. After a swap to a $3 roll of 1″ Gorilla tape, it inflated immediately. This is the second set of E*Thirteen wheels that we’ve experienced this with. That said, it would be shortsighted to overlook an entire wheelset due to its rim tape.

These days it’s not that hard to build a set of wheels with aluminum rims which match the weight of the average carbon fiber wheelset. So why buy carbon? In short, ride quality. There isn’t an aluminum rim on the market that can mimic the sprightly, resilient feel of carbon fiber. With that in mind, there are shades of grey. We’ve ridden carbon wheels that were flat out too stiff, thus transferring every bit of chatter to the bars. On the contrary, we’ve also ridden carbon fiber wheels that felt flimsy and noodly in corners. Ideally, you want something that sits comfortably in the middle… 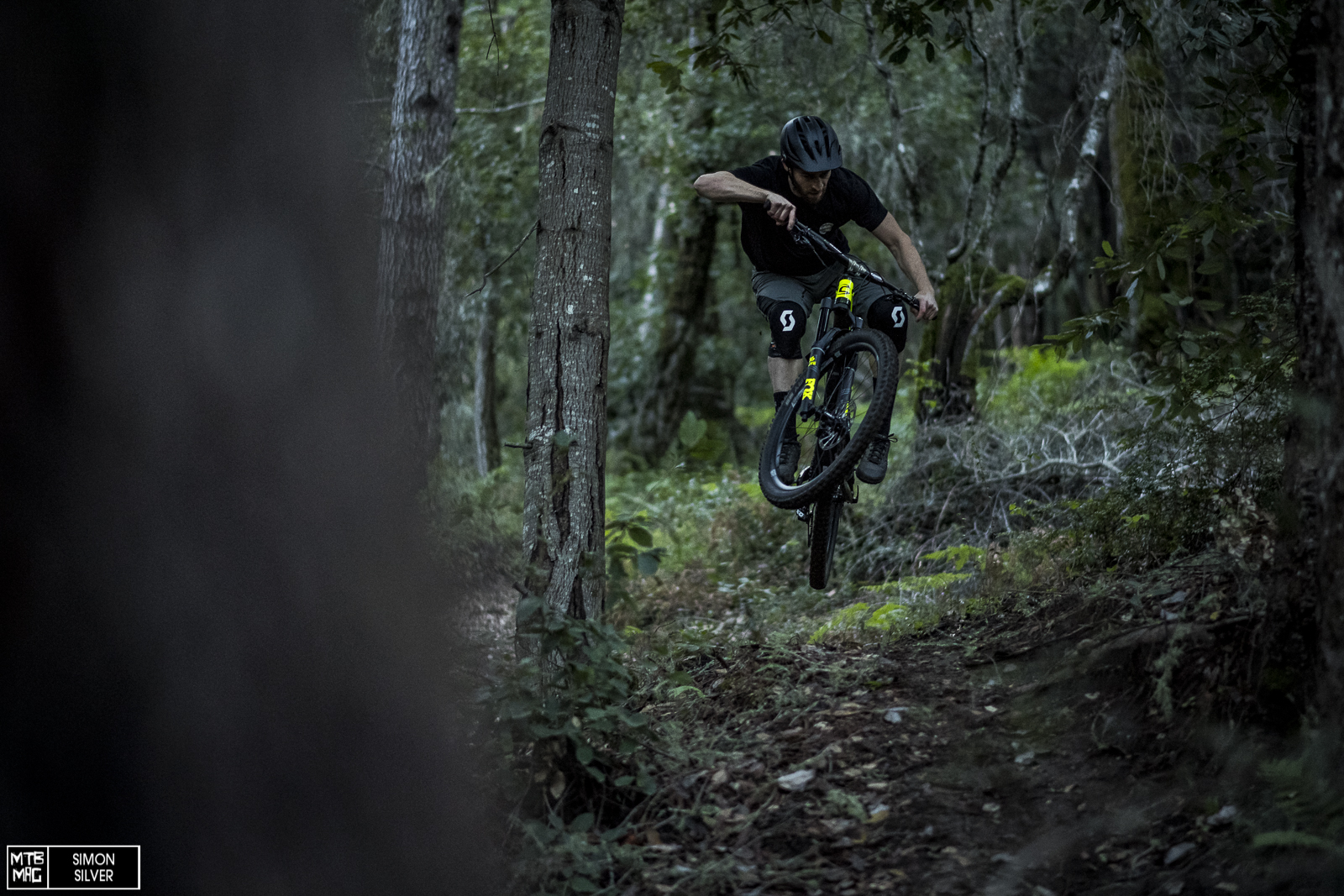 We’d rate the TRS Race SLs as being just about right. They felt quite snappy in the tightest, slappiest of corners while taking the edge off enough in the rough stuff. While it’s admittedly hard to gauge such things, we’d rate them as being just a hair on the less vertically compliant side. We feel this could come down to their taller, narrower rim profile. Our test rider weighs 185 pounds and is fairly aggressive, so perhaps lighter and less aggressive riders might not experience mind blowing levels of trail chatter absorption, but it’s tough to gauge such things preemptively.

We noticed the relatively fast engagement right away, it’s certainly beneficial on techy climbs and while trying to put the power down after exiting slow, awkward corners. While some boutique hubs offer slightly more points of engagement, the TRS Race SL hubs don’t lag. They are plenty fast and we’ve ridden wheelsets that cost substantially more and offer slower engagement. It’s worth mentioning that we did feel a slight bit of drag in the bearings on the front wheel for the first couple of weeks, but over time it broke in. It’s worth noting that the bearings are in great shape front and rear, even after numerous hosings. 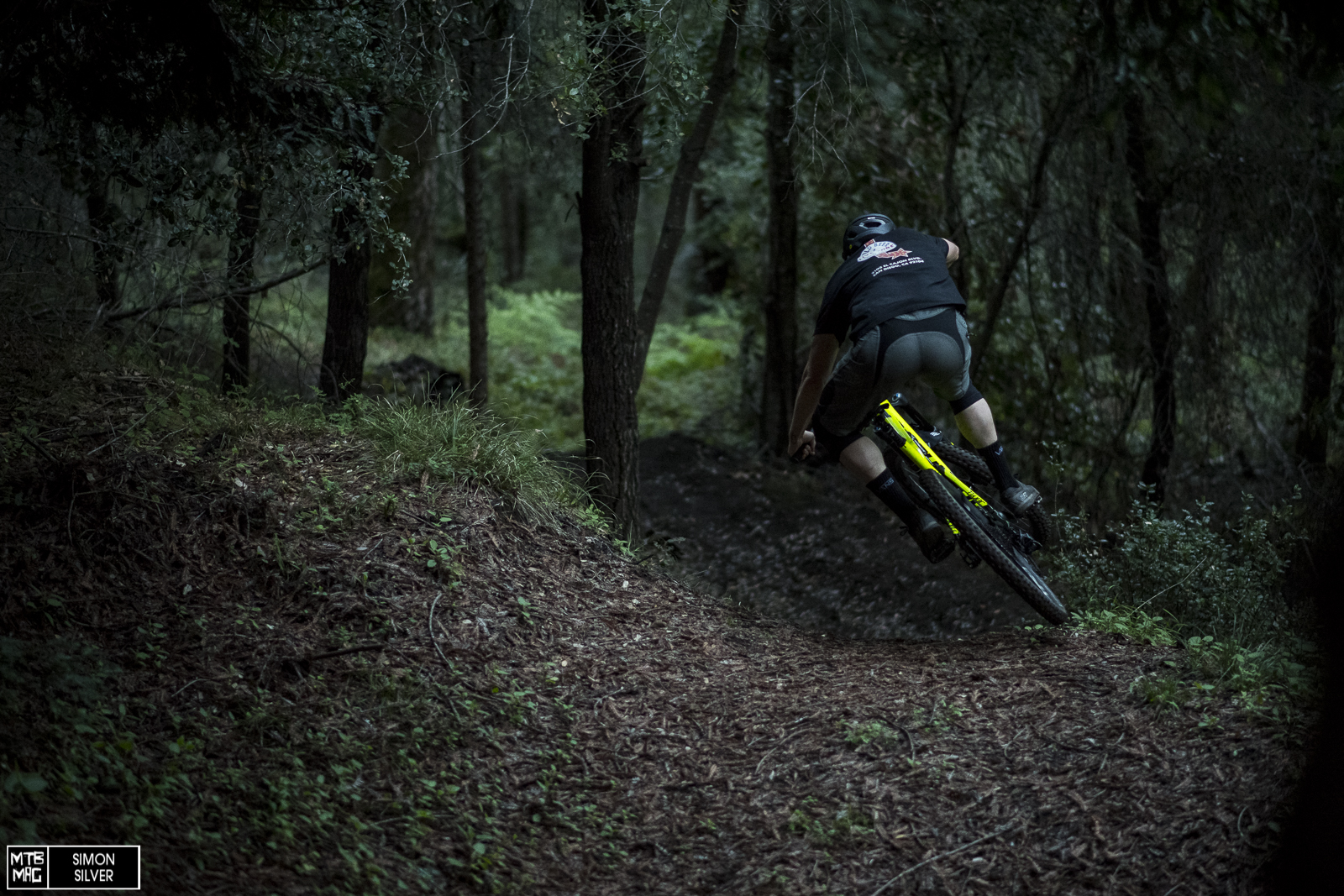 The 28 mm inner diameter is pretty standard fare. With wider tires becoming a bit more popular, riders who are looking to run “not-quite plus” tires might want to opt for rims closer to the tune of a 30mm inner diameter. If you run tires in the 2.1-2.4 range, as called for, the TRS Race SLs have a good, average tire profile, but we do still like the tire footprint on offer from slightly wider rims. In any case, unless you’re accustomed to running crazy low pressures, the tires won’t roll in the turns, particularly if you run mid weight casings.

Last, but not least – impact resistance. We’re happy to report that in our five month test duration we haven’t cracked or compromised either rim, nor have we bent them out of shape. After all, carbon wheels typically don’t really bend, they break. It’s worth mentioning that as these wheels bounced back and forth between two bikes, we ended up dishing and re-dishing them multiple times and had no issues with their overall integrity. Perhaps because the rim is a bit on the beefier, less vertically compliant side, that gives it a bit more impact resistance. In any case, we had a handful of rock strikes and a few big cases with no major issues. The bike industry hasn’t really come up with a name for sides of a rim (where the brake track would be) now that we all use disc brakes, but that area is rather beefy and hookless, which is confidence inspiring for impact resistance. Speaking of integrity and confidence – last, but most importantly, E*Thirteen recently updated their warranty policy to include a lifetime warranty on rims, which is huge.

In the grand scheme of things, we’d describe the TRS Race SLs as striking a happy medium in just about every metric – price, rim width, engagement, weight, stiffness are all just about right. The value is good, but the price isn’t off the charts amazing, nor is it overly high. It’s just about what we’d expect from a set of wheels of this quality level. Our only minor issue was with one rim strip, so all in all there’s little reason to complain about with the TRS Race SLs. Very much worth considering is the lifetime warranty on the rims, leaving little to be hesitant about. Lastly, with Sea Otter on the horizon, we have an inkling suspicion that E*Thirteen may announce a comparable set of wheels with a wider rim diameter to satisfy the 2.4” – 2.7” crowd. We’ll keep you posted… 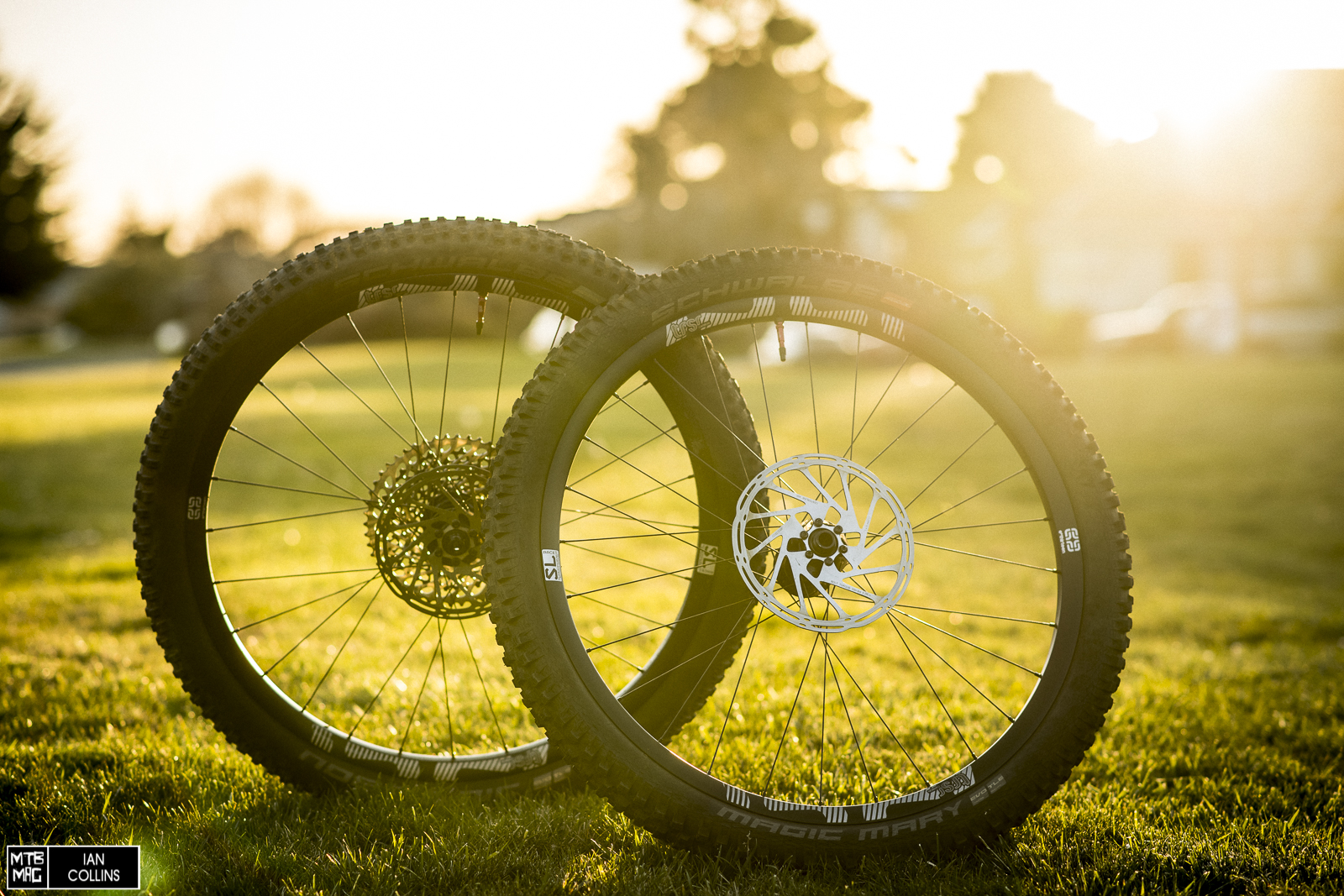