Evil Bikes have been making waves in the boutique frame market lately.  They’re done so by building bikes that not only feature highly aggressive geometry sets, but also offer a great deal of adjustability within that geometry, thus affecting its attitude on the trail.  The Following made waves last year as one of the first highly capable short travel 29″ bikes on the market.  It was basically the first wagon wheeler to truly resonate with the gravity crowd. 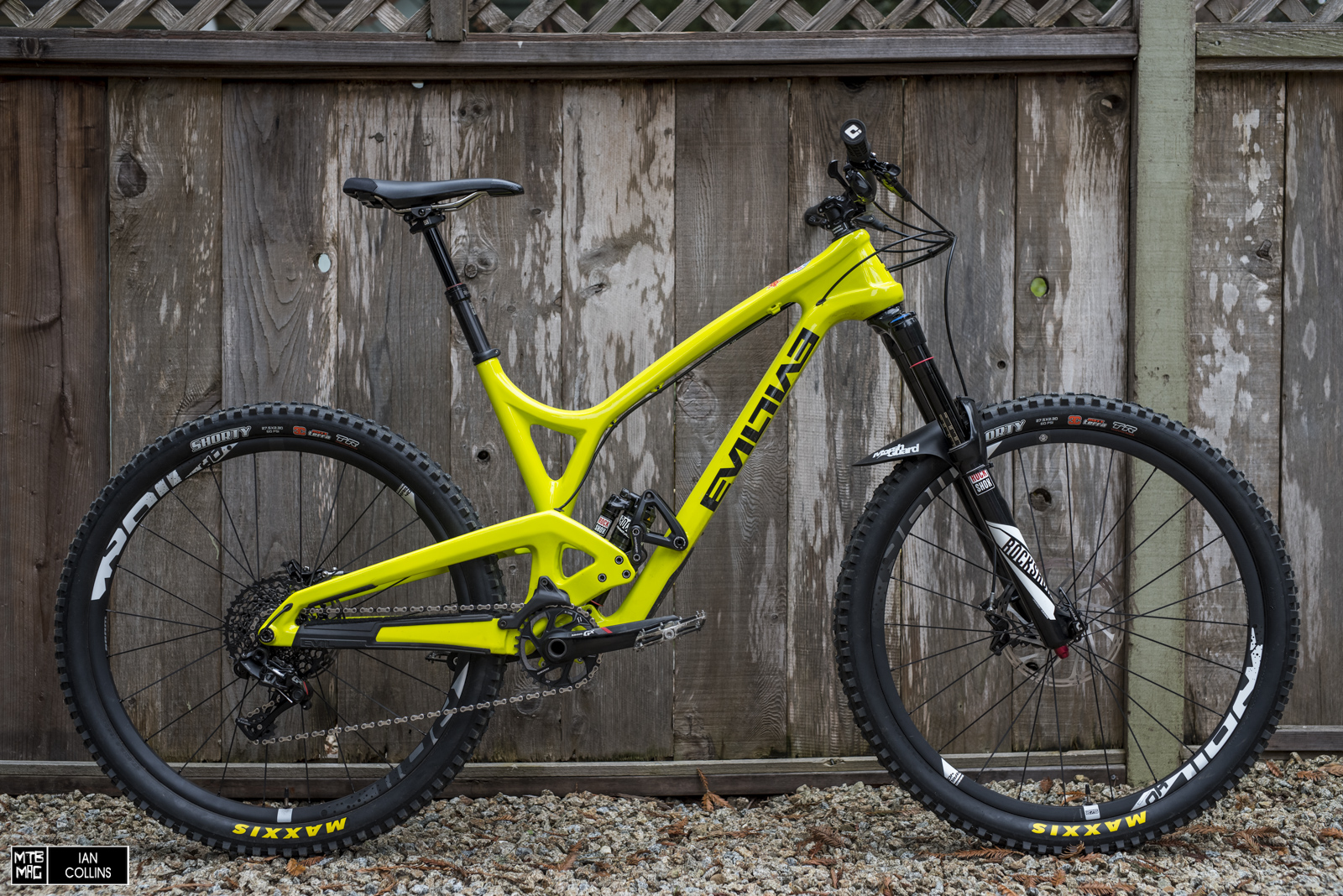 The Insurgent is Evil’s first 27.5″ wheeled bike; it offers 150mm of Dave Weagle designed,D.E.L.T.A. Link travel and has a host of cool features packed into an extremely stiff, snappy chassis.  Over the past 10 months we’ve packed in countless rides aboard this frame set up a variety of ways.  We’ve ridden it with 150mm, 160mm, and 170mm forks with both 42mm and 44mm offsets.  It’s seen 4 different rear shocks: two coil sprung and two air sprung.  Although we obviously spent the most time with a neutral headset, we also rode it with plus/minus one degree headset cups in both the “Low” and “Extra Low” positions.  We dug deep for this test.  After all, a bike this versatile needs to be ridden in every possible geo/travel/head angle combinations to really do it justice.  Let’s dive in…

As mentioned prior, the geometry on the Insurgent is aimed at a more aggressive crowd.  Evil makes that abundantly clear in the way that they market the bike.  With that said, the right build and setup can give the bike a more toned down attitude.  With a 170mm fork and a coil spring in the low position, the bike enters a level of capability that is close to a proper DH bike.  With a 150mm fork and an air shock in the high position, it’s a confidence inspiring but sprightly trail weapon.

In terms of numbers alone, our size large’s 451mm reach is quite long, thus providing loads of stability, begging to be paired with a short stem to give it quick, snappy steering.  A 64.8 º head tube angle is the slackest on the market in the “enduro” category, but can keep in mind it can be tamed down or slackened further with different headset cups.  Towards the middle of the bike, the bottom bracket sits at 334mm helping it really dig into turns.  Out back, it features super short 430mm chain stays, making it incredibly snappy, and easy to slap around in the switchbacks and tighter sections of trail.

When we first pulled the Insurgent out to build it up, it felt incredibly stout.  The tubing is thick, the head tube is massive and its shapes are beautiful.  The hardware is all logical and sturdy; gone are the days of Evil’s hardware issues.  The frame protection is brilliantly placed and it features some nice touches like a built in upper chain guide block and sag indicator.  Evil have added rubber grommets to help seal off the internal cable routing ports, quieting them a bit in the process.  Speaking of routing, everything is tidy and tucked out of harms way; running on the underside of the top tube.  The seat post routing has a sleeve that guides it from the down tube, above the BB shell and into the seat tube, making installation a breeze.  Lastly, the minimum rear rotor size is 180mm and the caliper mounts directly.  Although that leaves you without an option to run a 160mm rotor, we appreciate less hardware and fuss and realize that most riders on this bike won’t want 160mm anyway. 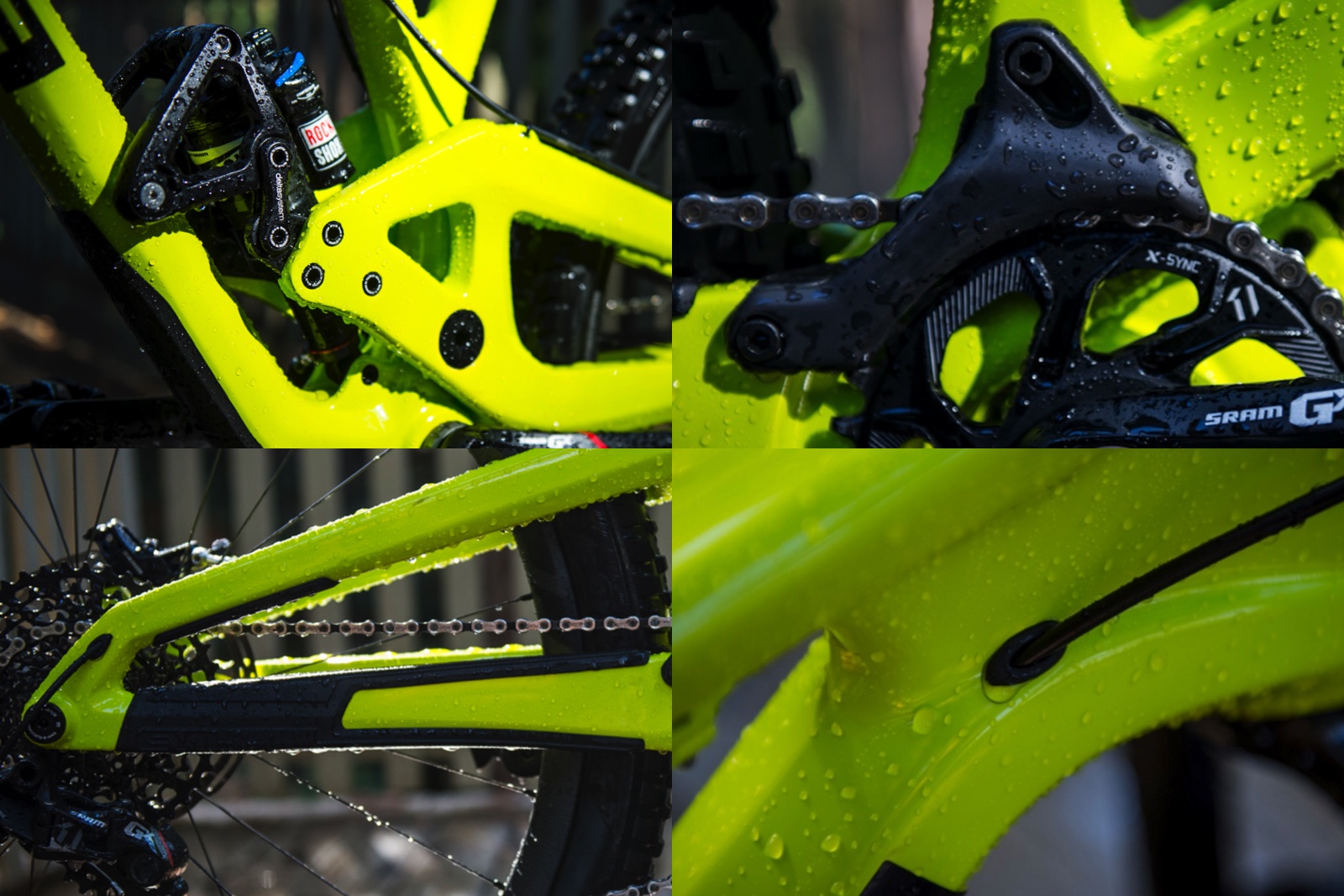 Our big gripe in terms of features was the lack of water bottle cage mounts.  We honestly have no idea what the hell Evil were thinking.  By purchasing this product we were able to mount one and it cleared a large bottle just fine, so there’s really no excuse that it didn’t fit.  All in all, while that may be a deal breaker for some, it’s pretty easy to get past when you consider the Insurgent’s other merits.  Oh, we almost forgot to mention – hats off to Evil…this bike has a threaded bottom bracket.  Nice to see them taking a step forward.

We started out with a middle of the road setup running a 160mm fork up front in the neutral headset position and the “low” position.  Evil Bikes owner Kevin Walsh has a salty sense of humor so after seeing how consumers reacted to the 29″ wheeled Following’s “high and low” positions, the Insurgent’s D.E.L.T.A. links have been aptly labelled “Low and Ex-Low”.  Right away our 6 foot tall rider felt very comfortable on the bike; admittedly he prefers bikes of the long, low and slack nature which characterizes the Insurgent through and through. 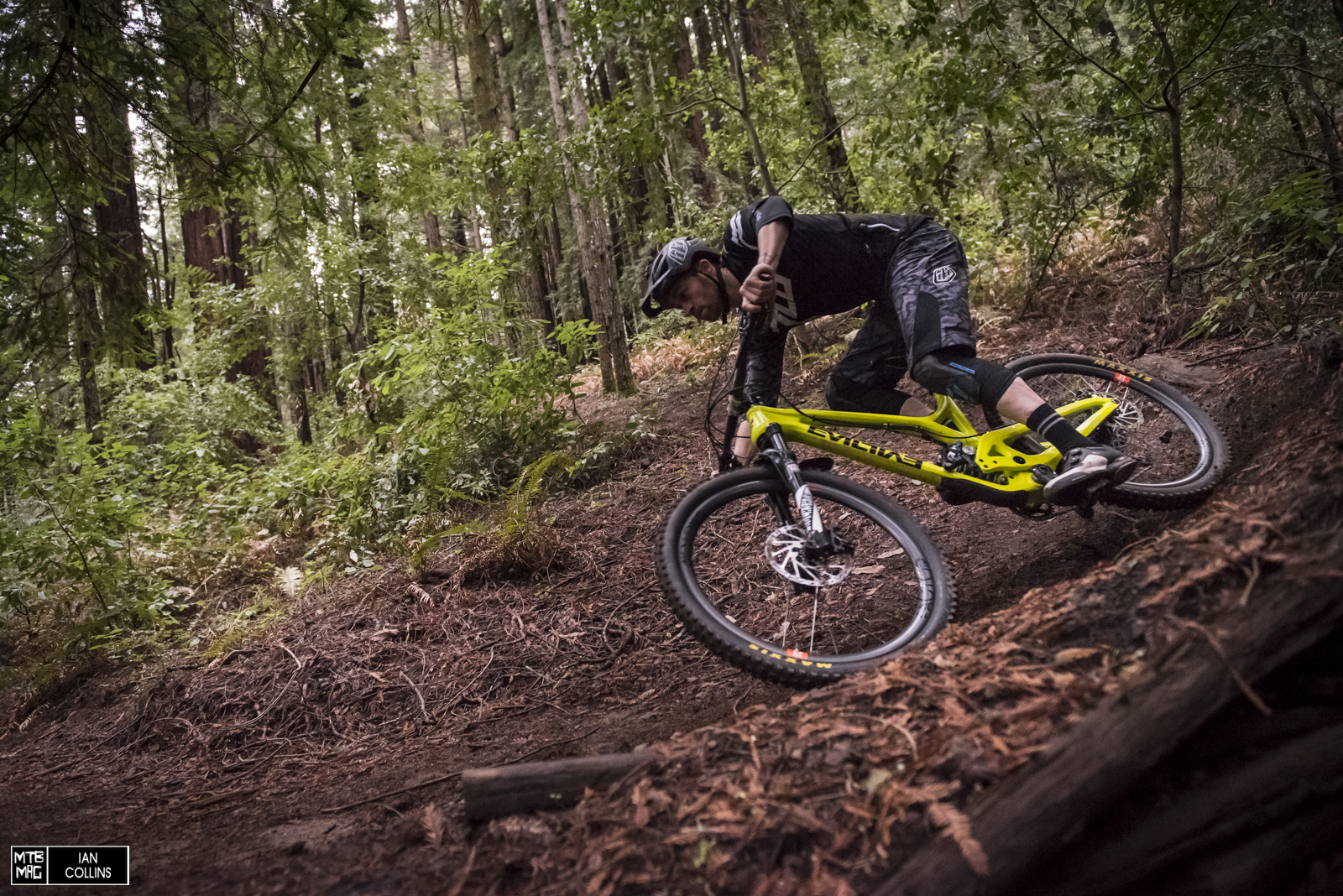 Our bike arrived without any volume reducers in the RockShox Monarch Plus Debonair, and we would eventually work our way up to 3 reducers which struck a perfect balance between sensitivity, support and bottoming resistance.  We must say that both Evil and RockShox have done their homework developing the tune for this bike.  Out of the box, it is the frame : shock relationship that we’ve ridden, but right away the bike’s capabilities had us yearning for more.  It begs to be pushed harder and harder as you become more comfortable on it.  Because its 150 millimeters of travel are driven by a standard shock size, you have the option to put really just about any shock on it.  We eventually reached out to PUSH to test their ElevenSix rear shock.  We’ll be testing that separately in the near future, but for now the takeaway point is that the Insurgent becomes complete monster with a coil shock bolted to it, approaching full DH bike capability. 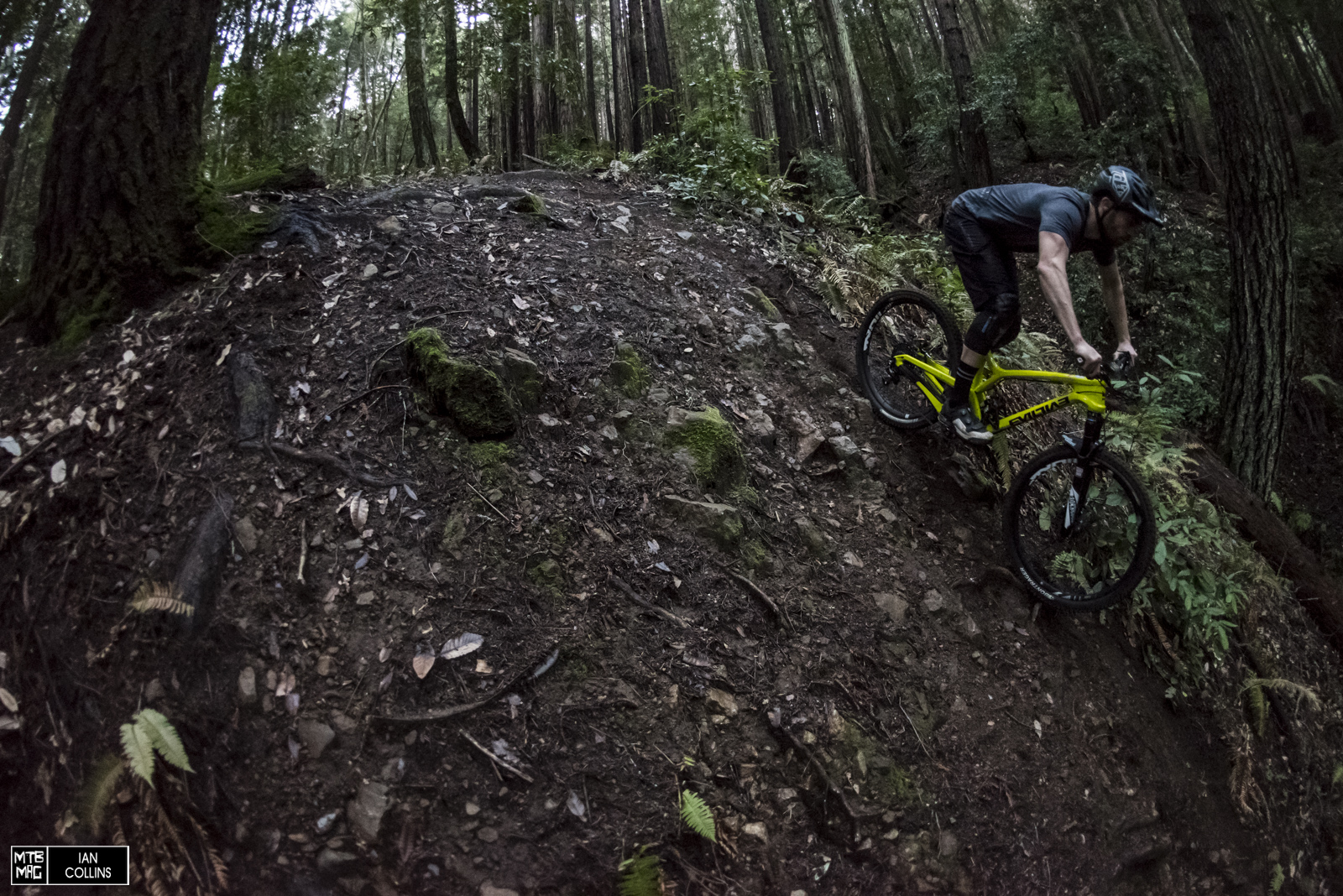 Back to the frame itself, after all that’s what we’re reviewing here…the kinematics on this bike are absolutely top notch, perhaps the best we’ve come across.  The pedaling efficiency is freakishly neutral for a bike with this much travel, but bear in mind that the overall climbing performance can be affected by how you build the bike.  If you put a Vivid air out back with a 170mm fork up front, then slap the bike in the “Ex-Low” position it will be a bit of a pig on the climbs as the front end gets tall and the seat tube angle gets a bit slack.  For all around riding, we had the best luck with the a 150mm fork/ex-low combo, and the 160mm fork/low combo.  Both of those setups struck a nice balance for those who have to earn their turns.  If you’re just riding in the park, shuttling, or maybe taking long slow fire road climbs up to very rugged terrain, then go all out and put it in the most aggressive position with a longer travel fork and a coil shock.  The beauty of this bike is that it can easily be tailored to meet the demands of most modern riders for the majority of their saddle time. 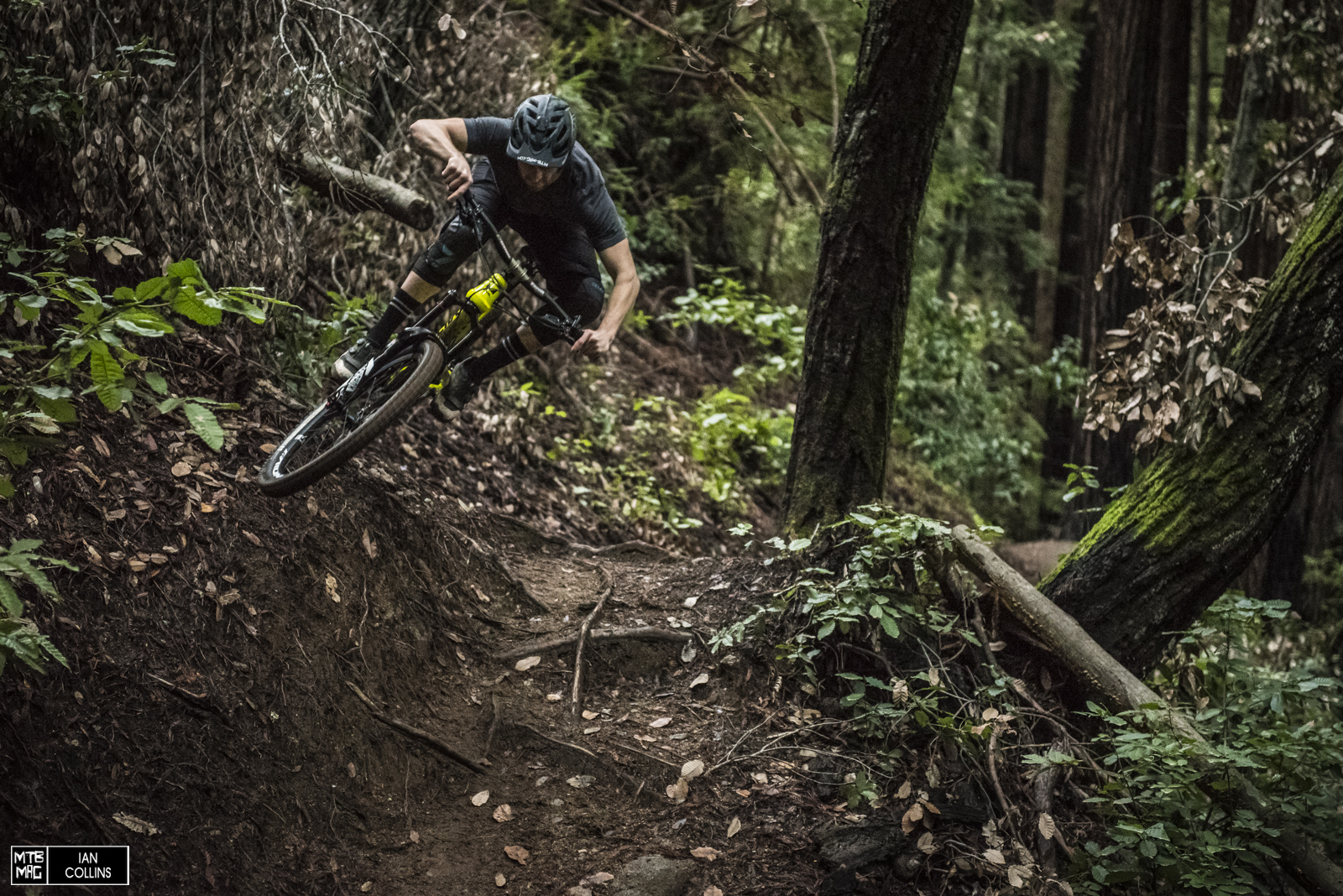 Moving away from climbing and on to the downhills…Most consumers considering this bike are likely drawn to it because of its descending prowess anyway.  Right away we were floored by every aspect of the Insurgent’s handling when we pointed it downhill.  The frame itself is incredibly rigid, but still manages to take the edge off.  You can absolutely bury it in a corner and it doesn’t flinch.  Its brilliant suspension rate curve keeps it tracking nicely in the rough turns, and the firm mid stroke support doesn’t let it dive or wallow in the tight, squared off turns.  The low center of mass helps to keep the Insurgent comfortable in the air while the aggressive bottom bracket height really helps it dig in.  Speaking of the BB height, we spent most of our time in the “extra low” position, but to do so comfortably we switched to 170mm cranks to provide a bit more clearance, particularly in rocky terrain.  Successive mid size chatter and rough bits were handled in a super composed fashion, but as the chain lays just above the chainstay, it suffered from some noisy chainslap in the rough bits.  We stuck some velcro on top of the frame guard and that silenced it substantially.  Riders with a 30 tooth ring with notice the most, while riders using a 34T won’t notice it much at all.  We mainly used a 32T and it was a minor, infrequent distraction.

In summary, we loved this bike.  Our tester felt that it’s the best bike that he’s ridden in this category.  That’s a strong claim but it’s easy to back up.  Over the course of the last 10 months of hammering we’ve done everything from 30 mile rides to DH shuttles on this bike.  We’ve done our due diligence with routine hardware checks and it’s been 100% trouble free, not indicating any shortcomings.  The Insurgent is super nimble and rewards aggressive riding while getting you uphill easily enough but ensuring a hell of a time on the way back down.  One of its strongest points is versatility and a highly customizable design.  The Insurgent will inspire confidence like nothing else, but it’s still fun and light on its feet.  Our only complaint is the lack of the water bottle cage, but that quickly becomes an afterthought out shined by the 10/10 ride quality.  If you’re considering a custom build, it would be foolish not to consider this frame.  If you’re looking for a fully spec’d bike, Evil offer completes with a highly competitive value even compared to much larger companies.  Hats off to Evil on a job incredibly well done.  We can’t speak highly enough about this bike.

Some videos of us testing the Insurgent can be found here and here.