After November’s Reign Advanced 1 test, we find ourselves testing Giant’s 2017 version of the Trance, the bread and butter All Mountain bike from the Taiwanese brand. Last August we presented the new Trance during a backcountry tour in Canada arranged by Giant. Recently, Giant Italy sent us a Trance to carry out a more exhaustive test. As usual we opted for the Finale Outdoor Resort trails as main location of this test, thanks to the hospitality of B&B La Rocca di Perti Mare. We chose to test the Trance Advanced 1, the intermediate build of the 3 available with a carbon frame: it’s a very interesting build, considering the specs and price. 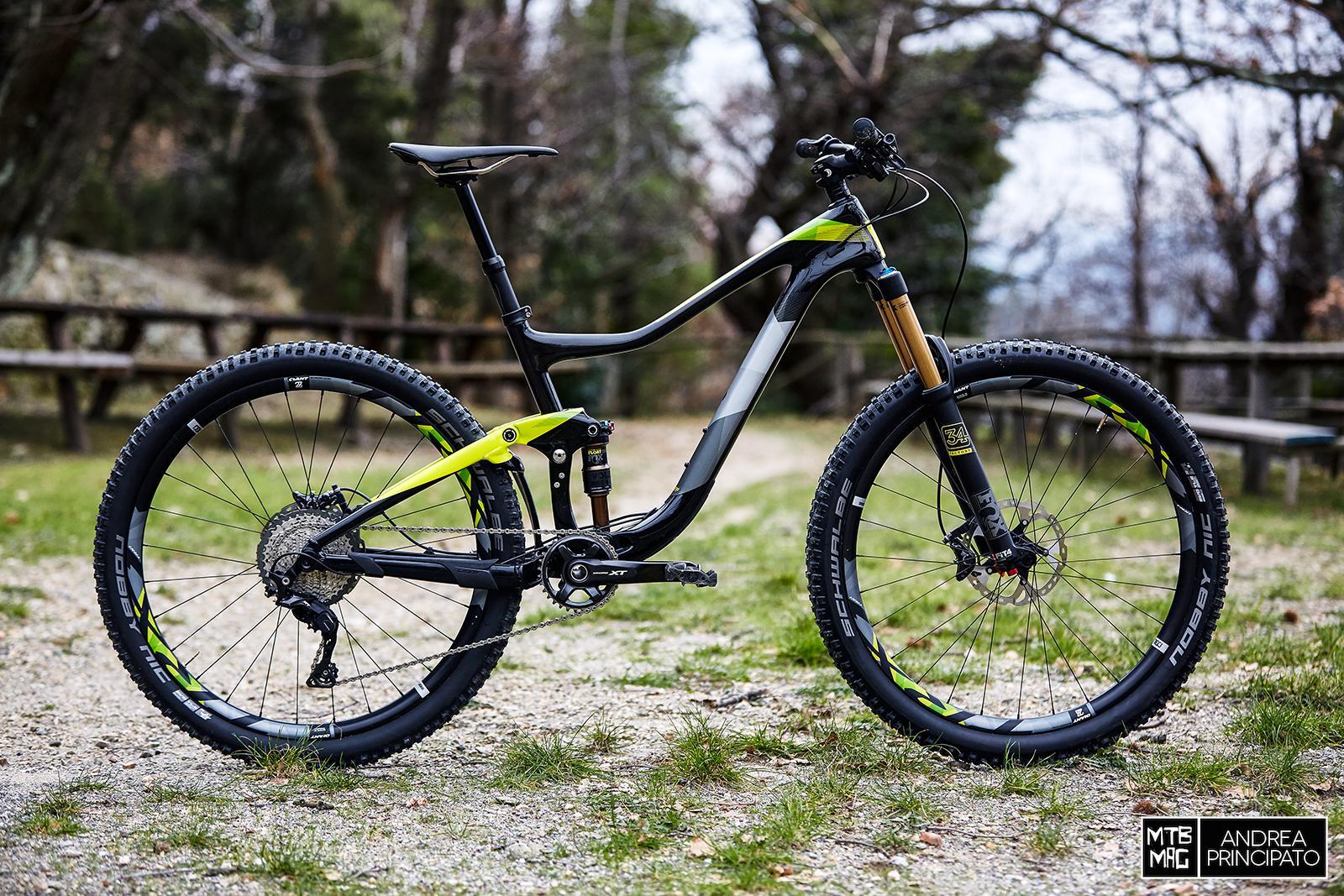 The new Giant Trance Advanced has its front triangle made of Advanced Composite carbon, the best MTB frame building technique of the Taiwan-based company. The same as we wrote about the Reign, Toray T-700 fibers have been carefully employed in order to give the Trance the right amount and combination of solidity, stiffness and weight, referencing the intended use.

The geometry and design are almost identical to the previous version. The Giant’s historical model gets updated in the details but not in its main features, leaving character and intended attitude unaltered. The 10mm longer travel fork doesn’t affect the head angle that Giant chooses to keep at 67°, but it obviously increases the stack height. The seat angle, which was a critical issue for the Reign, is still slack but 0.5° steeper. However, this slight variation makes it better. The top tube and the reach are 10mm longer on each of the four available sizes. The rear triangle is now 435mm long, 5mm shorter than the previous model. All in all, the whole bike length is approximately 5mm longer than the previous model, resulting in a slightly more stretched, but still centered riding position.

The Maestro suspension system is in line with Giant tradition but it has been updated in more ways than one. The rear triangle is made of AluxX SL aluminum alloy and some small details have been updated to improve stiffness, solidity and even functionality with the internal routing of the derailleur cable. Introduction of the Boost 148 standard creates more clearance for the tires. The one piece upper link has a completely new shape and it is now made of carbon. Pivot points and dimensions of the links have been revised in order to support a trunnion metric shock and to improve kinematics as well as the compression curve, which in the previous model had some issues in the mid part of the travel. The result is concrete and the new Trance compression curve is now well managed with good small bump sensitivity and a smooth progressivity throughout travel. This enhanced sensitivity in the initial part of the travel also affects pedaling stability, so it is better to lock out the shock for a good climbing performance. 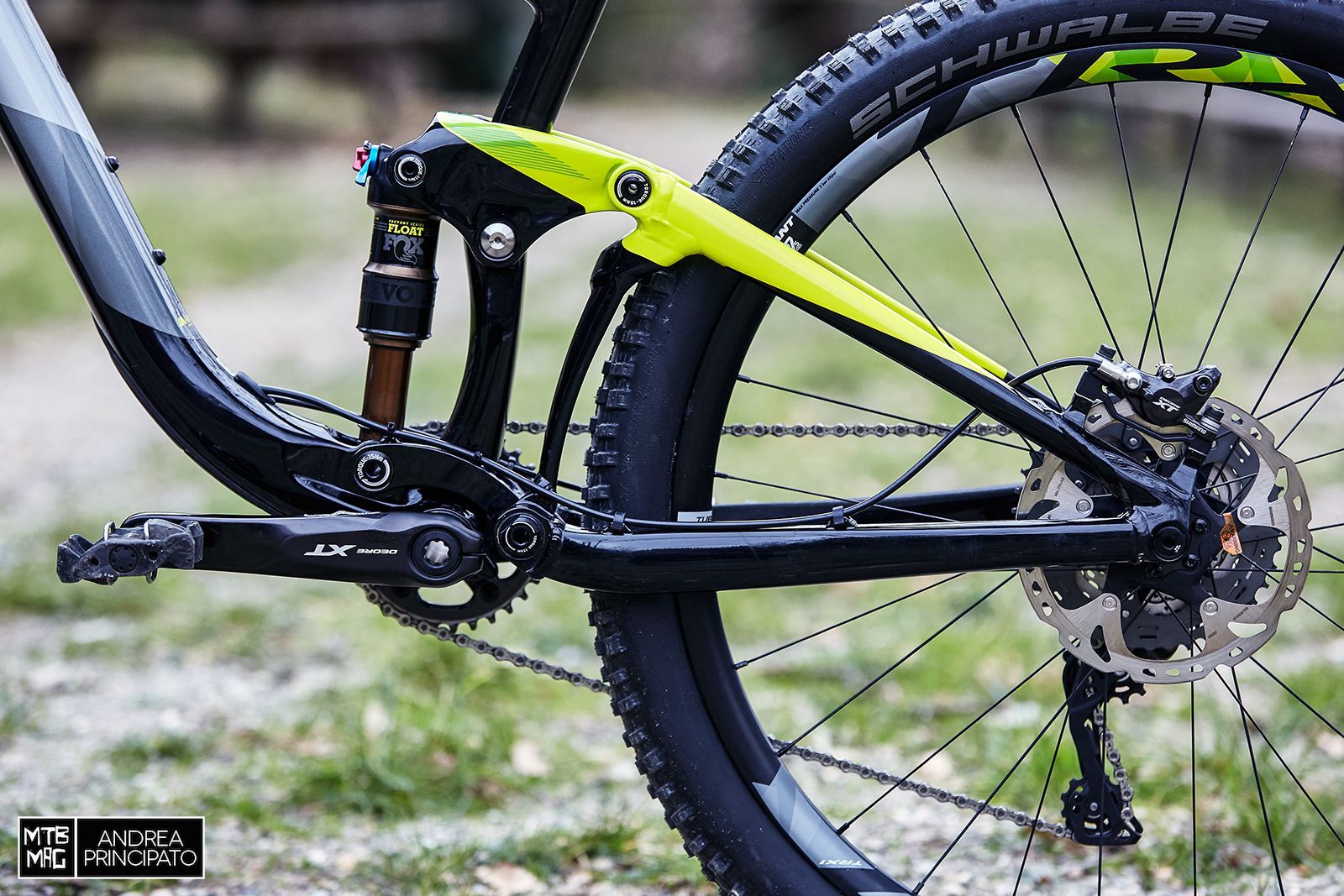 The management of the 140mm of travel of the Trance is entrusted to a FOX Float Factory Kashima DPS Evol, in metric size, with trunnion mount. This model has the classic Open, Medium, Firm positions and a 3-click compression adjustment within the Open position. Firm position locks out the shock almost completely and it is great for smooth climbs, while Medium position provides good stability and excellent absorption of small bumps on technical climbs, thus enhancing traction. 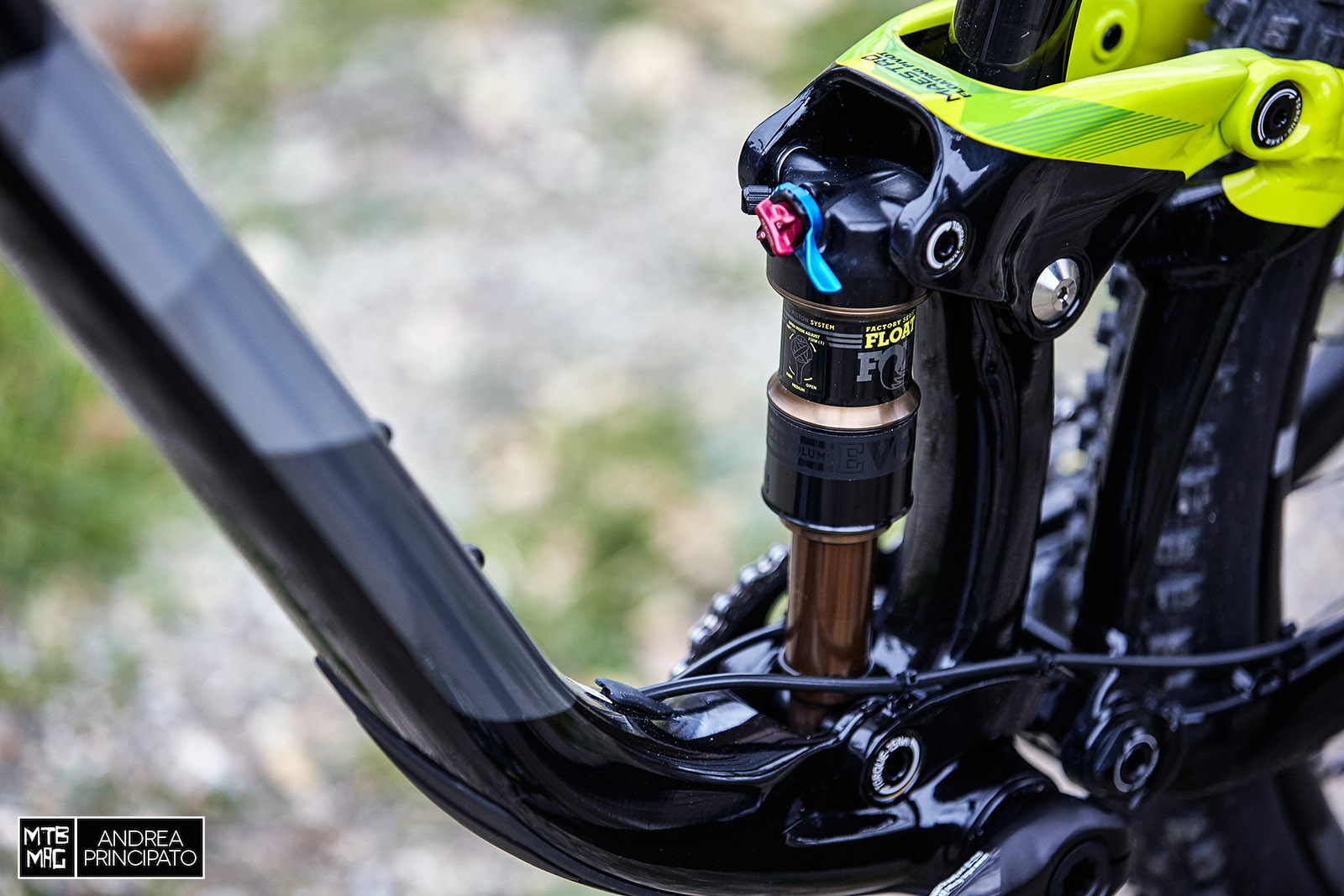 The fork is a FOX Factory Kashima product as well, a 34 FiT4 with 150mm of travel. The hub is Boost 15×110 and has the ultra-light FOX KaBolt axle without quick release lever. The same choice of not employing a QR lever has been made for the rear wheel. 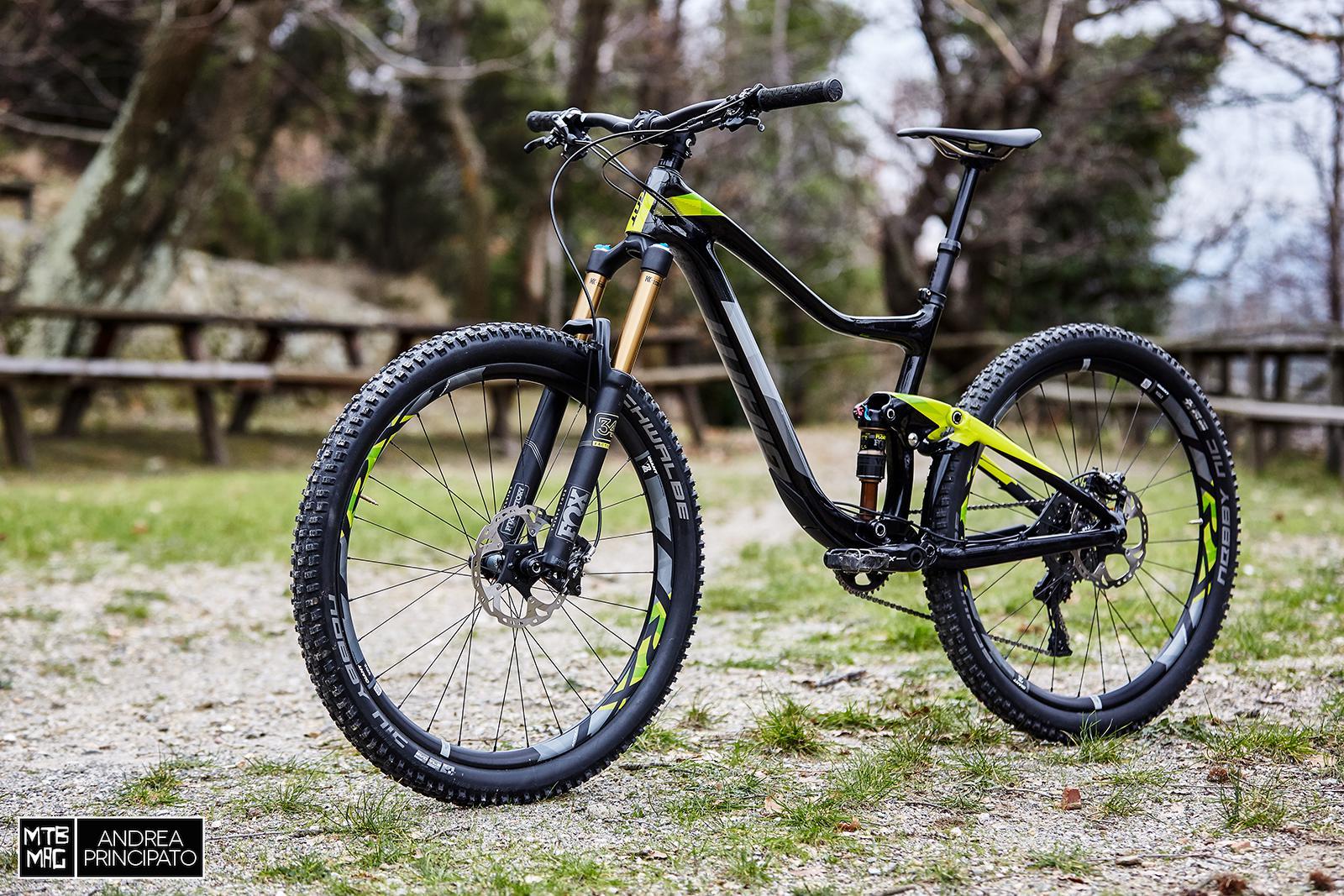 The drive train is made by Shimano: an XT 1×11 groupset with a 11-46 cassette and a 32 tooth chainring provide a well calibrated gear ratio range. The frame can support 2x drive trains thanks to the two fixing holes for Direct Mount derailleurs. The Trance Advanced is also equipped with ISCG mount to install a chainguide or bash guard should you choose. 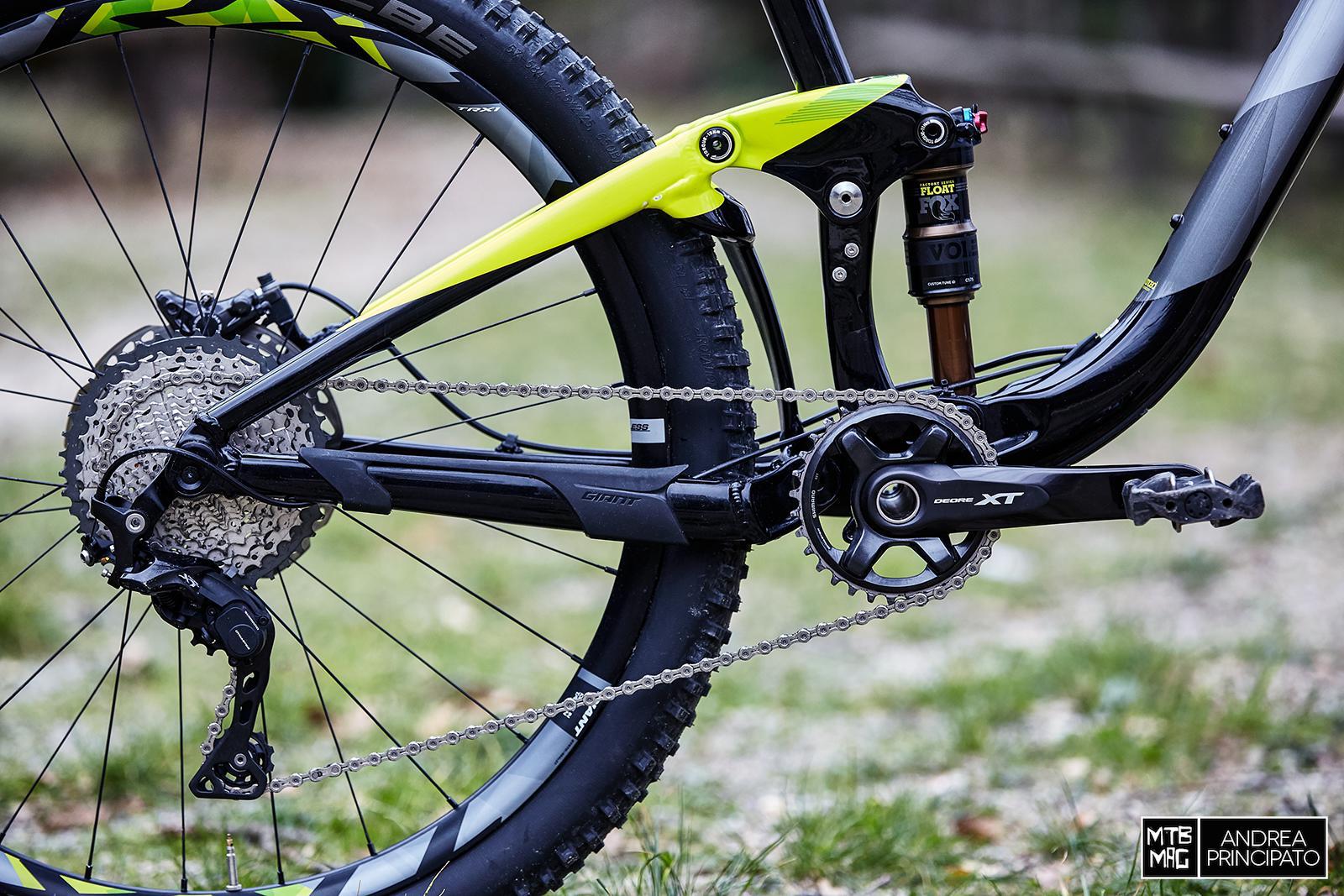 Shimano provides the XT braking system with 180mm Ice Tech rotors on both wheels. The Post Mount support is a one-piece forging with the whole dropout, welded to the seat stay and the chain stay to enhance solidity and stiffness. 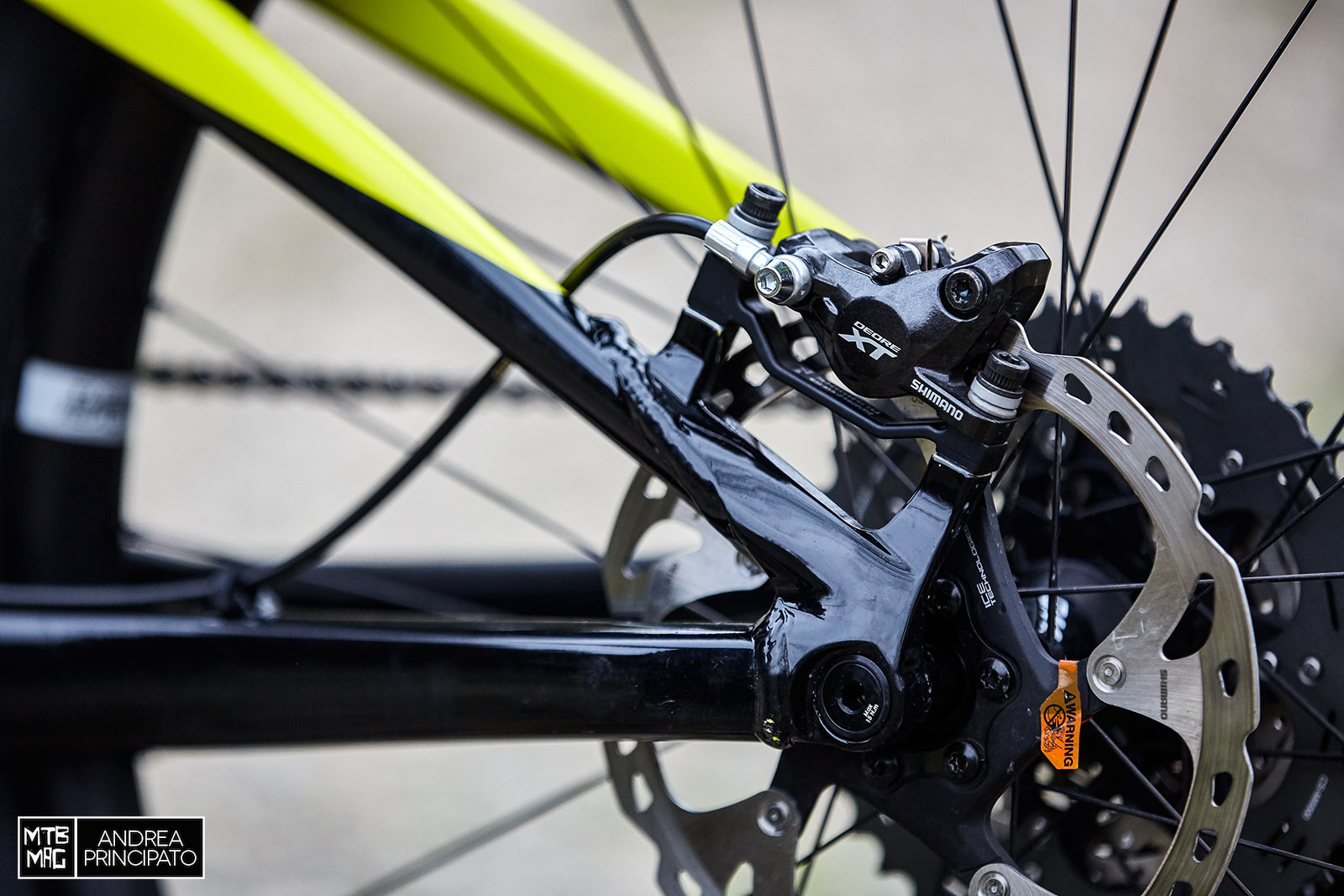 Even though this is a medium range build, Giant specs a set of carbon rims on the Trance Advanced 1, a feature which makes it highly competitive compared to competitors’ bikes at the same price. The wheels are Giant’s TRX 1 275 Composite, the same set we already tested on the Reign Advanced 1: 27mm internal width rims, 28 Sapim spokes and Boost hubs. Tires are supplied by Schwalbe: two Nobby Nics in Snakeskin / TL Easy (Tubeless Ready) version: 2.35” Trailstar at the front and 2.25” Pacestar at the rear. Giant provides wheels with tubes, but both rims and tires are Tubeless Ready should you want to save a pound or more of rolling weight. 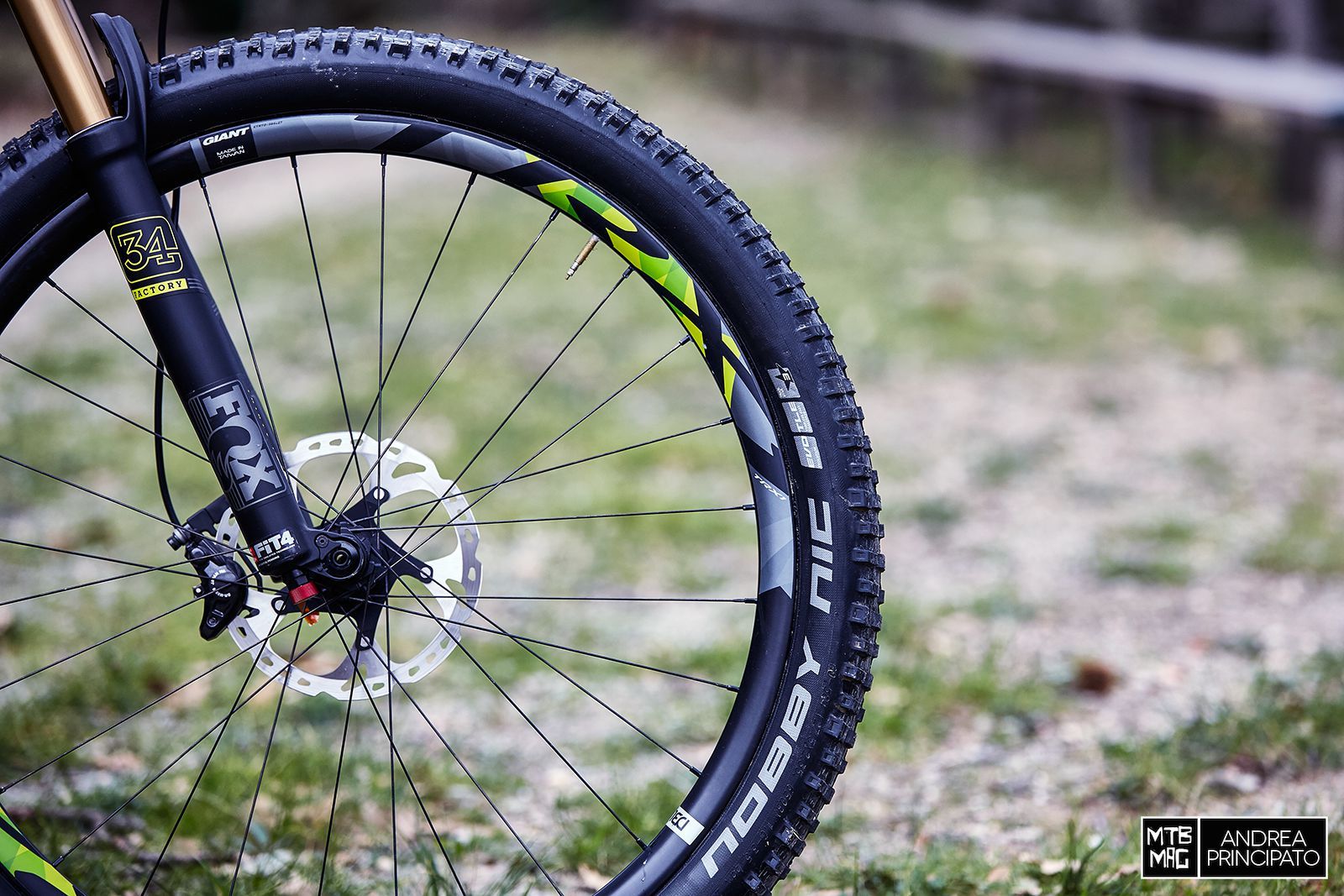 The handlebar and stem come from the Giant Contact SL series. The aluminum handlebar is 750mm wide with a 19mm riser; the stem is no less than 65mm long. This combination of measures penalizes the riding quality of the Trance. A couple of centimeters more on the handlebar width would be better but 750mm is a decent number: we felt the angles forced us to have a non-aggressive style, with a 9° backsweep and a 5° upsweep. Regarding the stem, we decided to replace it right after the first ride with a 55mm one, to have a better measure in relation to the intended use of this bike and at the same time without excessively changing the reach, and consequently the riding position. The seat post is also made by Giant and it confirmed the great performance we described in the Reign test. It is the same model, a 125mm travel Contact SL Switch Trail, really responsive and smooth. The seat is as well a Giant Contact SL Neutral. The cable routing is internal: the cables enter the frame just behind the head tube through specific ports protected with rubber seals. Derailleur and brake cables come out of the frame on the upper side of the lower down tube, then they run on each sides of the lower link, to reach the rear triangle. The chainstay is equipped with a solid and efficient rubber protective strip while on the seat stay end there’s a thin soft-rubber protection fixed with a low-quality glue that is soon going to be lost, as we already noticed on the Reign. The lower end of the down tube has a solid and wide rubber protection that covers a large portion of the bottom bracket shell. Another thing to be outlined is the comfortable and accessible position of the water bottle cage mounts. The first day our tester rode the Trance, he was able to make his personal record on a climb despite still being a bit down with the flu: a clear sign of the great climbing qualities of the Giant All Mountain bike. The Trance literally flows through fast climbs, both on asphalt and off-road, with an excellent rolling speed thanks to the combination of hubs and tires. The riding position is pivotal, for climbing it’s perfect in every detail from frame geometry to cockpit measures. The weight, measured at 12,3kg on a Medium size, is another advantage on climbs. All of these factors make the Trance a really good partner for long and sustained trails.

Also on technical terrain you can still climb with agility. The Maestro suspension system combined with the FOX Float DPS provides good stability while still remaining active; this generates efficient traction even on the most bumpy sections. You can really appreciate the maneuverability of the Trance in the most winding and technical bits; the front end, which is not too aggressive, is a big advantage on steep and strenuous climbs, where it gives its best. The Trance’s downhill performance is really good: it is almost as good as an Enduro bike regarding the suspension system and geometry, the only limiting factor is the 67° head angle, suited to an all around use, which is optimal for climbing but not so effective downhill compared to the other great characteristics of the bike. The bike rides well thanks to its maneuverability and efficient suspension providing good grip and control. In the steepest and most technical sections though, the ride is not quite as confidence inspiring due to the front end’s behavior. The handlebar geometry and the stem length combined with the head angle tend to force the front wheel too close when heavily loaded, causing some under steering issues. 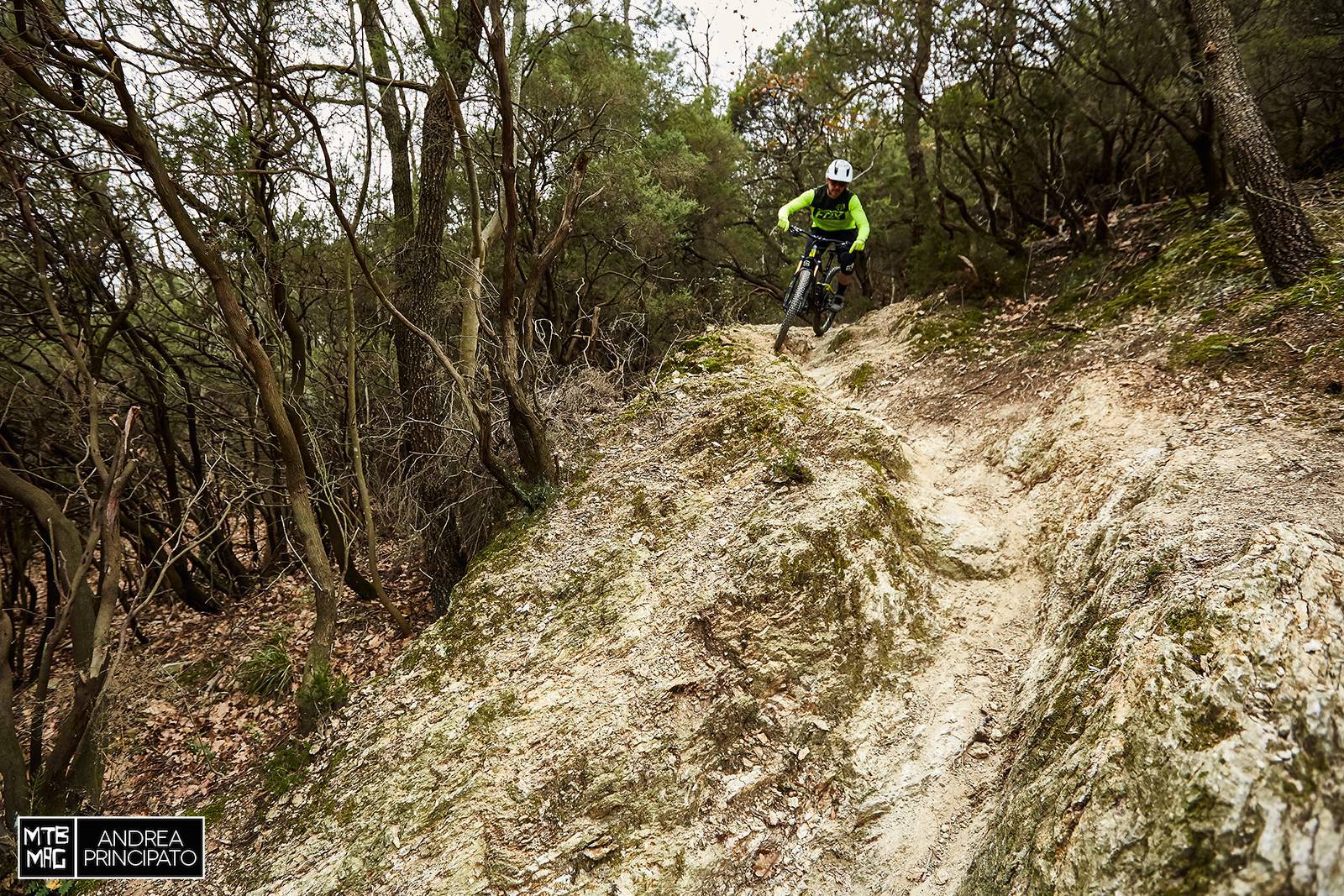 In all the other situations the Trance stands out for its maneuverability. The bike is nimble, fun and safe to ride, extremely fast and smooth in changes of direction. You can enter the turns simply and intuitively while having good cornering stability. It is probably on mixed sections that the bike gives its best, with back to back changes of direction, tight turns, fast sections, up and downs with some bursts: those kind of trails that requires an active style of riding and the Trance guarantees prompt responsiveness and precision. 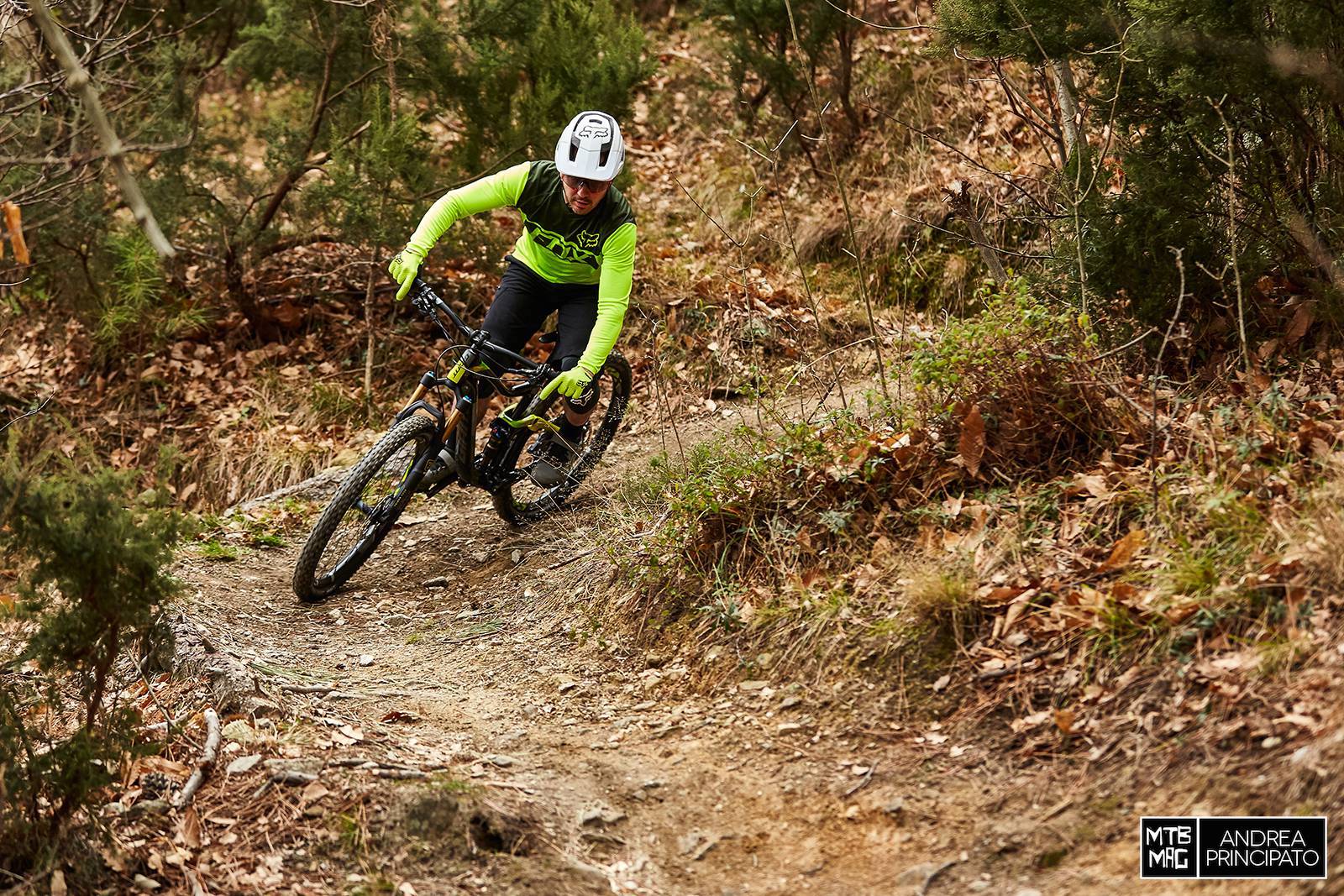 On the Trance, the completely renewed Maestro suspension system definitely enhanced the performance compared to the previous model. Initial sensitivity provides grip and keeps the wheel constantly glued to the ground, while on more bumpy and harsh sections the mid part of the travel soaks up hits efficiently, keeping the bike stable and responsive in order to maintain good speed. The new Giant Trance Advanced performs really well both on climbs and downhill. It is fun to ride and nimble on mixed terrain. It is maneuverable and precise, ready to grind out the miles… therefore, it’s a real All Mountain bike. The specs are suitable, except for the cockpit which can still be improved, and the price is very provocative to say the least…especially considering most of the competitors.