If you haven’t heard of the GT Fury, you probably haven’t been paying much attention to downhill mountain bike racing. A few years back, the Atherton family had the chance to collaborate with GT and design a DH bike from the ground up that was precisely what they wanted. Long and stable with a linear suspension rate, it’s a bike that you have to TRY to knock offline. With its very unique independent drivetrain linkage, it is neutral and efficient under pedaling; an important attribute when racing the clock. Made from aluminum, it’s due to see a revamp in carbon fiber, but comes in at a very attractive $2,170, so building up a dependable, custom Fury is an easy & affordable task for a privateer racer. Follow along for our in depth review of this race bred machine as a frameset. 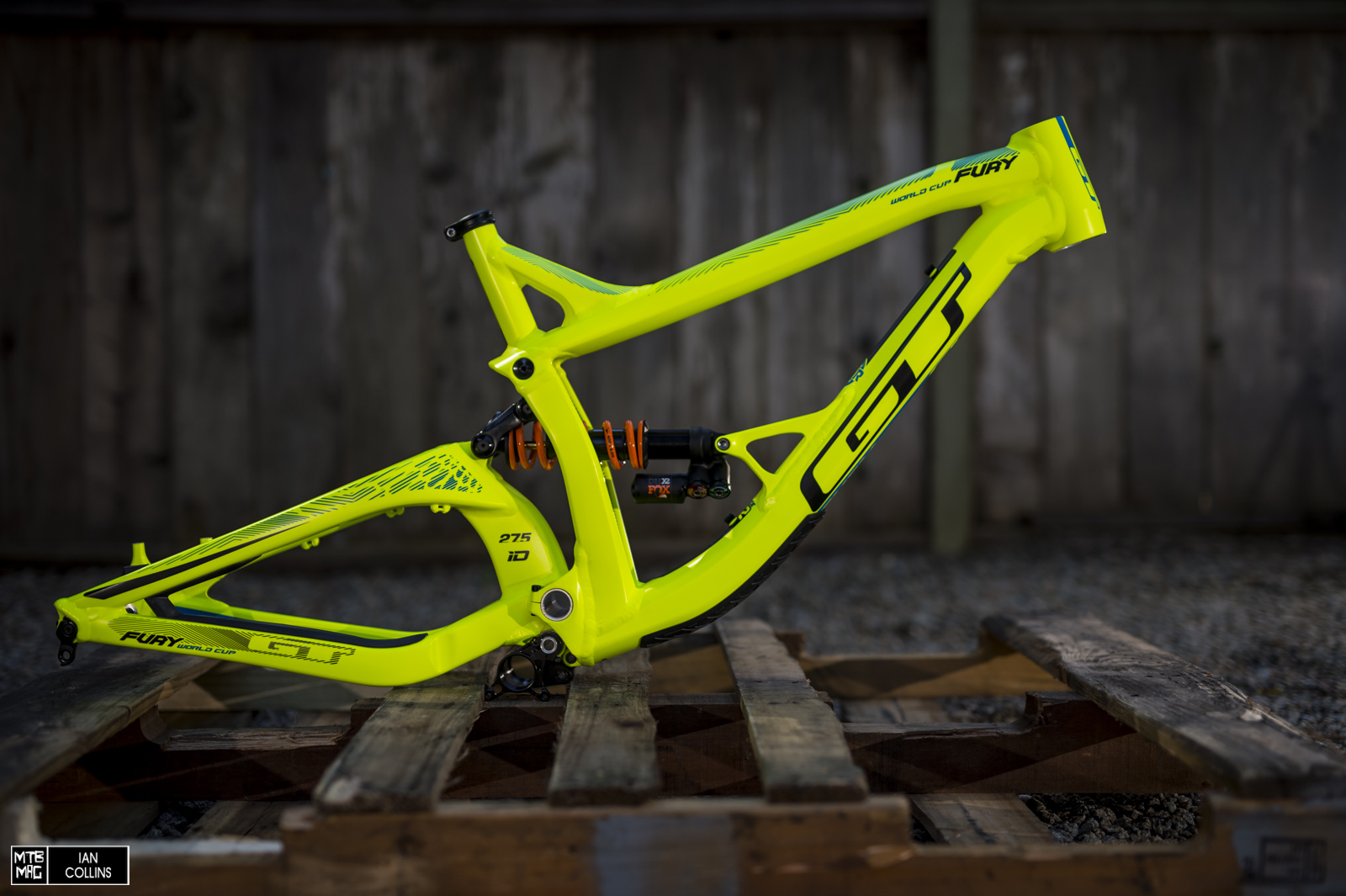 Well, the first thing you’ll notice about the Fury is just how stout it is.  That point simply can’t be emphasized enough.  From front to back, the tubeset is massive and the frame is well fortified with heavy duty hardware.  The linkage at the rear shock is small, but quite sturdy.  It should be noted that said linkage is simply there to stiffen things up torsionally and relieve the shock itself from becoming a structural part of the bike.  However, it has no effect on the rear shock’s rate.  The Fury’s BB area is interesting; a massive main pivot sits just above the bottom bracket shell which is a huge, one piece forging that includes ISCG-05 mounts.  This BB shell is also home to separate links that connect to both the front and rear triangles helping to increase pedaling efficiency.

The Fox DHX2 provides loads of adjustability…So much that it doesn’t need specific tunes for varying frames and applications.  In fact, Fox provides a baseline setting and you simply experiment from there and tune accordingly.    The unit offers externally adjustable, independent high and low speed compression damping with a twist of a 3mm or 6mm allen key.  Since Fox offer lightweight springs in 25 pound increments, you don’t have to compromise in achieving an optimized setup for your weight and riding style.  Kudos to them on that.

All in all, everything built up nicely and we laced up our Fury with a sturdy mix of parts from our Scott Gambler.  Aside from the BB, basically everything just swapped right over so it was easy to focus on the frame’s behavior.

We quickly realized that this is the stiffest DH bike that we’ve ever ridden, and in most instances that is a good thing, but realize that this isn’t a cushy bike that takes the edge off.  It’s not a lazy man’s bike – it requires(and rewards) a strong rider muscling it around.  The Fury is purpose built for racing and its number one job is simply hanging on.  It’s also the longest size large we’ve ever ridden and it may even be the longest on the market – we’re not sure.  In our opinion, this is how a large bike should fit – spot on for a 6 foot tall rider.  Anyhow, the Fury is not just roomy up front but also out back.  The 442mm chainstays provide a great deal of confidence in hairy terrain provided you’re going straight or carving through longer, drawn out turns.  The flip side is that in tight, slow, techy bits the long stays become a bit tougher to maneuver.  For racing at an elite level, this is hardly a hindrance…In fact, this is precisely what the Athertons wanted. So, the bike is long, we’ve made our point.  Besides, you can always size down if you’d like.  There’s more to the formula of this bike’s race pedigree though.  The Fury’s suspension rate is also very linear.  It eats up mid sized hits rather nicely and never seems to pack up or lose traction.  Yes it’s incredibly plush, but unless you run a rather firm spring it can wallow and feel a bit vague.  For such a linear bike, it did combat bottoming quite well but just wasn’t the liveliest bike we’ve ridden.  Our 185 pound tester was quite happy with running a 450 pound spring on most rough, proper DH trails.  In hindsight, after a trip to Whistler and Coast Gravity Park, he would have opted for a 475 or even a 500 pound spring to get a bit more pop and support out of the suspension. 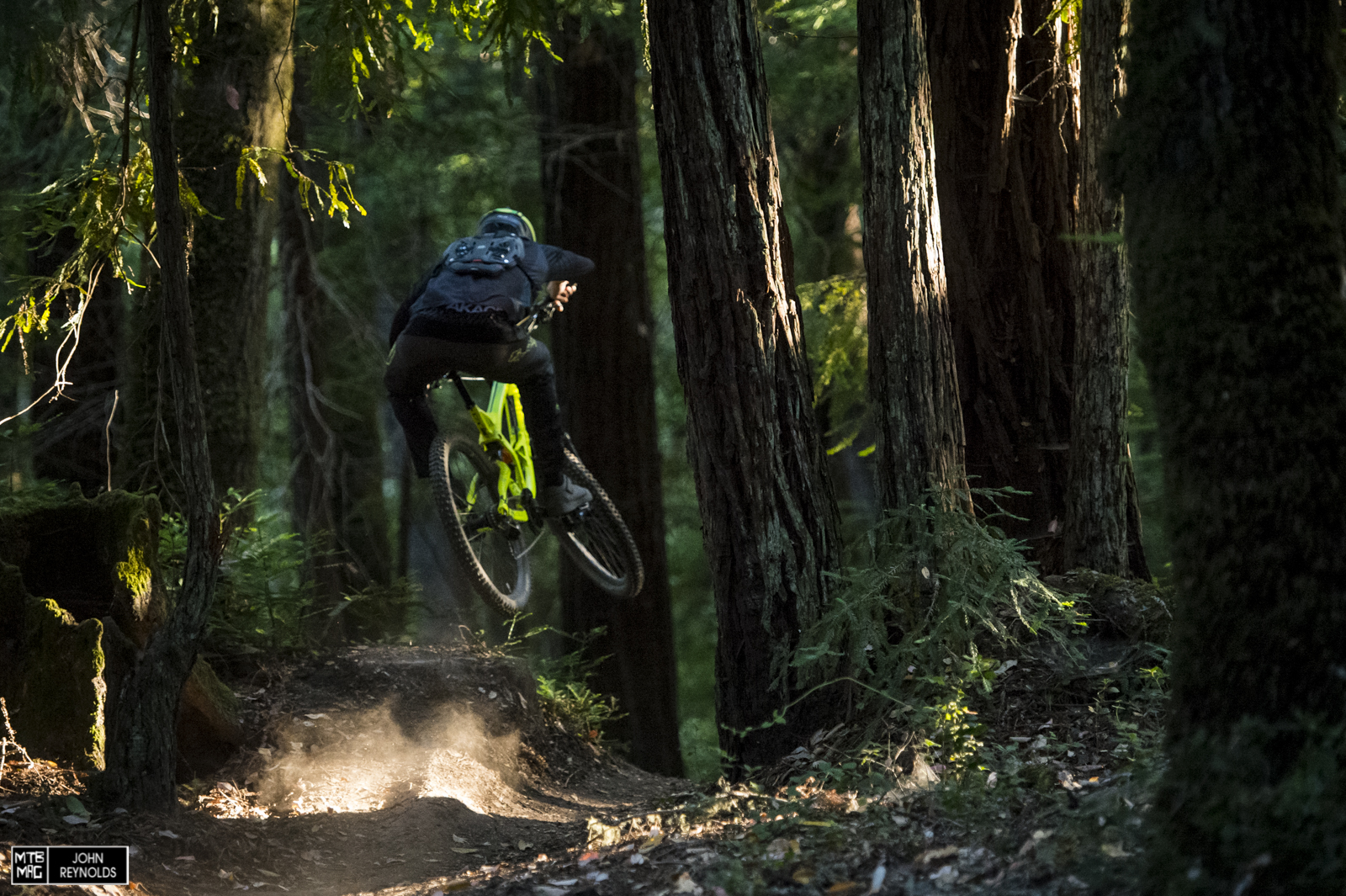 Speaking of bike parks, that is one place where this bike got the job done but just didn’t thrill us.  After all, it’s a race bike and park riding is different…it’s recreational.  With that in mind, the Fury would be an excellent candidate for an air shock out back to help build a bit more progression into its travel.  We’ll be looking into that in the coming weeks.  The braking and pedaling manners were neutral and efficient respectively.  Considering the Fury sports 210mm of travel and a very linear suspension rate, it pedaled remarkably well. When the going gets rough, it’s hard to find a better bike; it truly is a plow.  Stable is an understatement, the Fury handles incredibly at speed and inspires a great deal of confidence in burly terrain.  It doesn’t take it easy on its pilot though.  It is rigid in more ways than one and it begs for a strong rider that wants to just barely hang on.  Although the bottom bracket isn’t freakishly low, it’s placed just right, striking a balance between safe pedal clearance and a low weight placement to improve cornering.

In terms of durability, we haven’t had a single issue with our bike and after a few years of being proven on the circuit, we know the Fury is a reliable machine.  In fact, we’ve never seen one break.  Kyle Strait won Red Bull Rampage on one, and a hell of a lot of World Cup races have been won aboard it by the Athertons as well, so it has been put to the test tenfold.

A great deal of DH bikes are built to appeal to both park riders and racers so inherently both can be a compromise of sorts.  It doesn’t have to be that way though, by utilizing adjustable chainstay lengths, BB heights and head angles, designers can make a bike far more versatile.  GT have decided not to do so, but we do think it’s still highly commendable that they have created a no holds barred race bike and have packaged it at a consumer level. 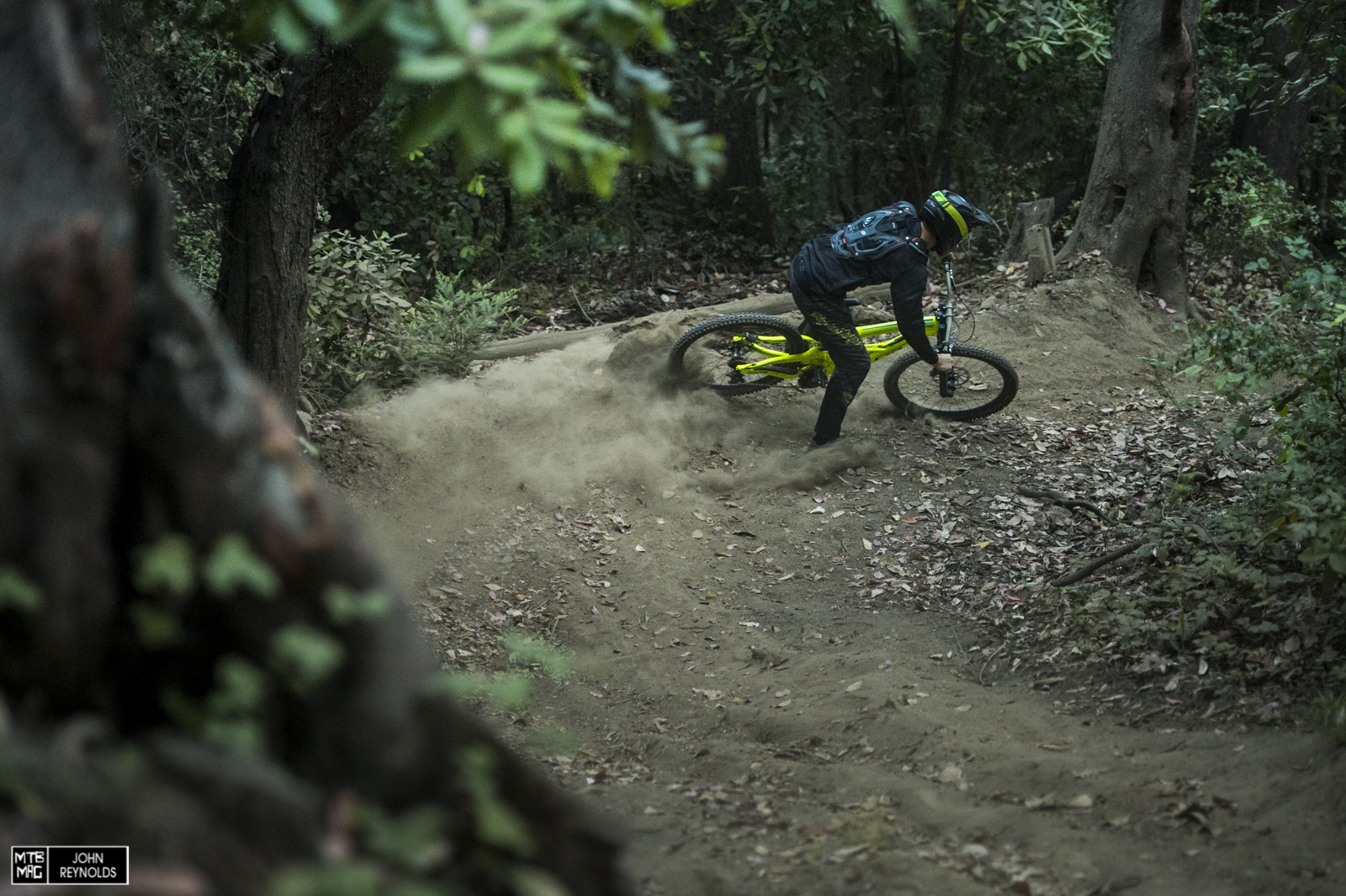 So who is this Fury for?  First and foremost it should appeal to DH racers, and with the price being so reasonable, we’d think it would appear to a privateer type in particular.  Add in the fact that it’s incredibly tough and dependable and becomes even more eye catching to racer types.  Even if you don’t race, but your trails consist of gnar and chunder, you may want to give this bike a serious look.  At the very least, it will inspire new levels of confidence.