A bit over a year ago, upon Marzocchi’s official re-brand after their acquisition by FOX, they announced a no frills rear shock aimed at bikes ranging from 130mm to 200 + mm of travel. Dubbed the Bomber CR, which stands simply for compression and rebound, the shock has two external adjustments and retails for just $ 299 USD. Back in September, Marzocchi sent out a sample for testing on the back of my Yeti SB-165 which would ultimately compliment the Z1 Coil . Keep on scrolling to see how this utilitarian little unit has performed … 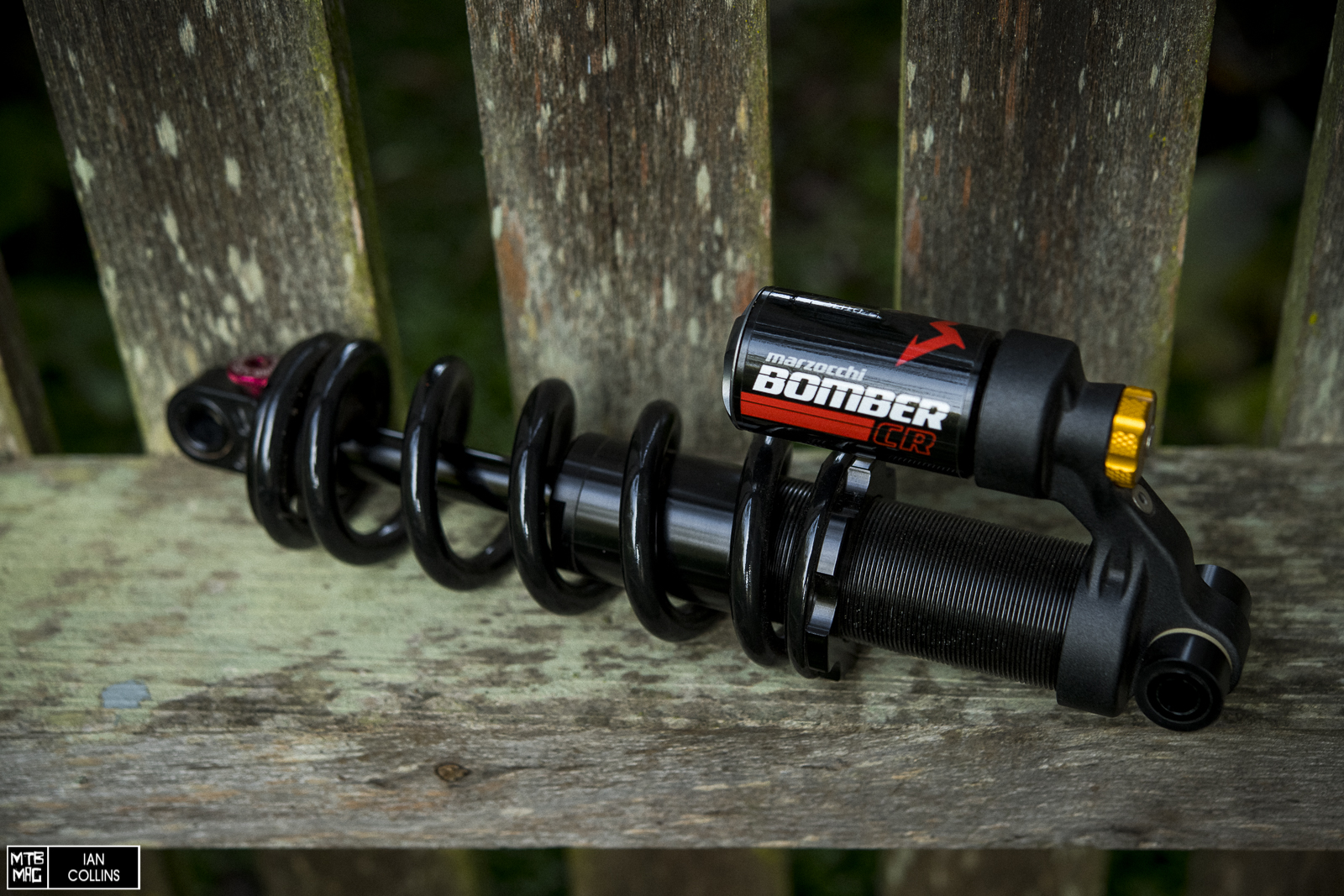 The Bomber CR’s architecture is essentially a FOX Vanilla RC , which is a 10 year old design. That’s nothing to be ashamed of as it’s a simple, bulletproof design without any major shortcomings. 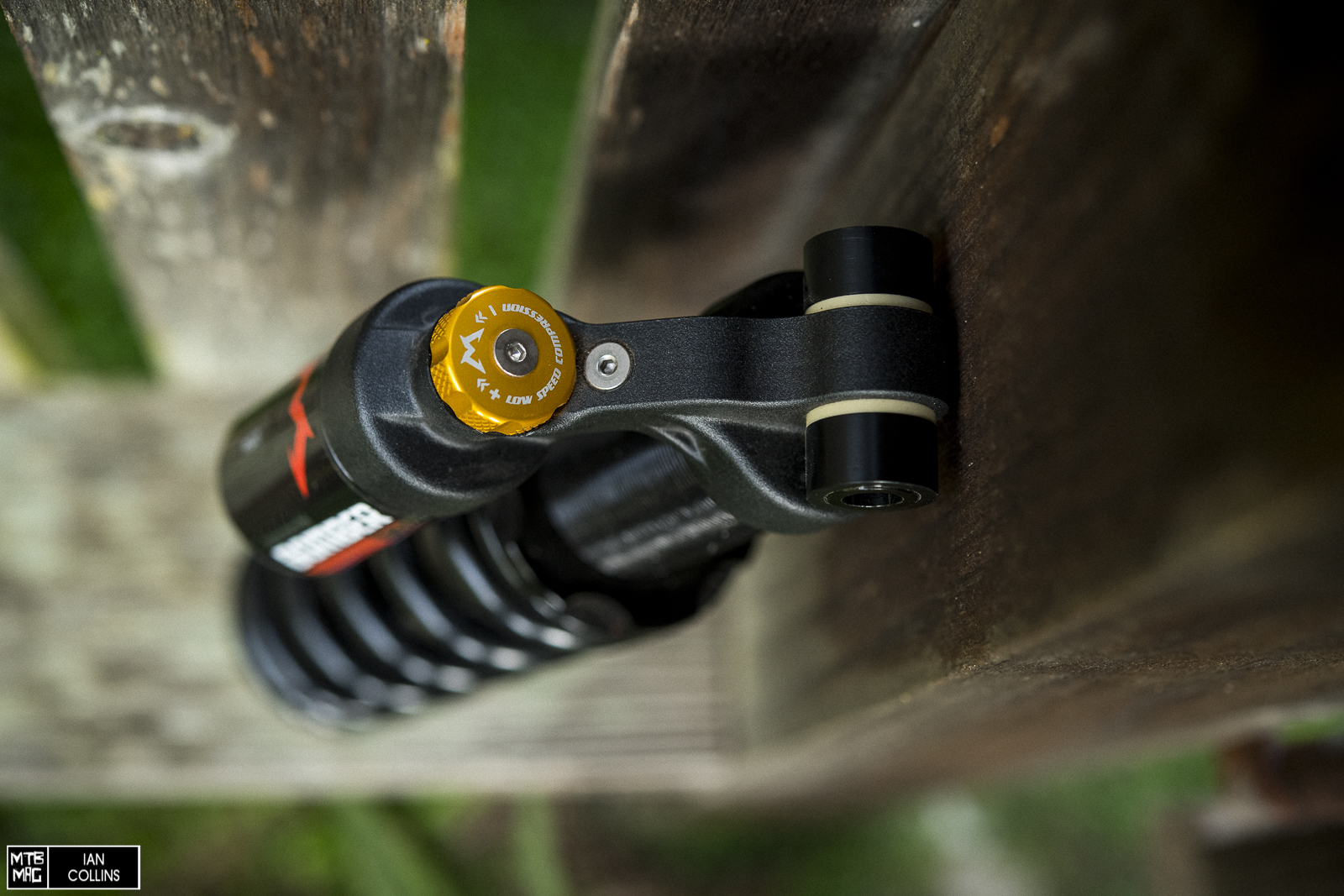 The single low speed compression adjuster features 16 crisp, clear detents and is rather easy to turn, gloved or not. 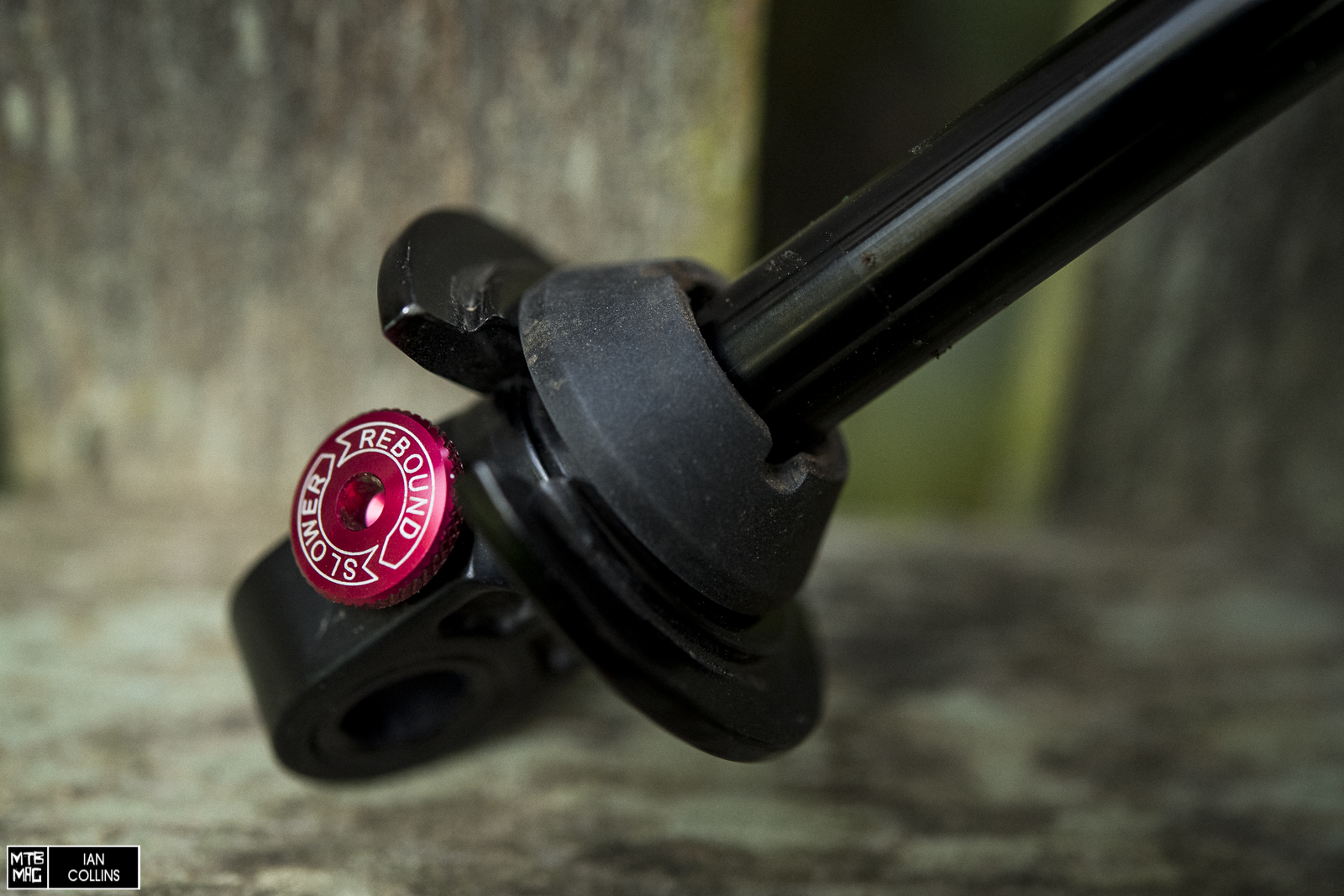 The smaller rebound knob features a similar 15 clicks which are equally distinct. It’s pretty easy to get ahold of, depending on your frame’s design. The Nitrile bottom out bumper is a bit on the skimpy side of things, so on a really linear frame it will only help so much. In the case of my Yeti, which is quite progressive, it wasn’t a hindrance. The shock itself is rather light actually – after all, there isn’t much to it. As you can see above, it was just 390 grams for the 230x65mm tested here. The standard $25 steel springs from Marzocchi are a bit on the heavy side and unfortunately don’t come in 25 pound increments. So if you’re feeling fancy and your wallet is feeling heavy with all that money you saved, you can grab a FOX SLS spring for $130 USD and save about a half pound depending on the size.

Out of the gate, during a very brief setup it was obvious this shock had quite a bit more support than the standard FOX DHX2 that came as original equipment on my Yeti. Despite all of the DHX4’s adjustments, I never really got along with it all that well on that bike. Even with the frame’s 27.5% progression, if felt a bit dead and wallowy on the SB165. This was not the case with the Bomber CR, which built up a lot more support throughout its travel. I bounced back and forth between the #425 and #450 spring rates and eventually settled on the #450 for 99% of my riding. As far as the adjustment goes, I ran the low speed compression nearly open for most general riding. On bike park style jump trails I generally added quite a few clicks and it never got to be too harsh or spikey. On occasion, when I had some massive days on this bike it despite being a bit long in the tooth, I did bury and close the LSC knob and it really firmed up the suspension, although it did not completely lock it out. 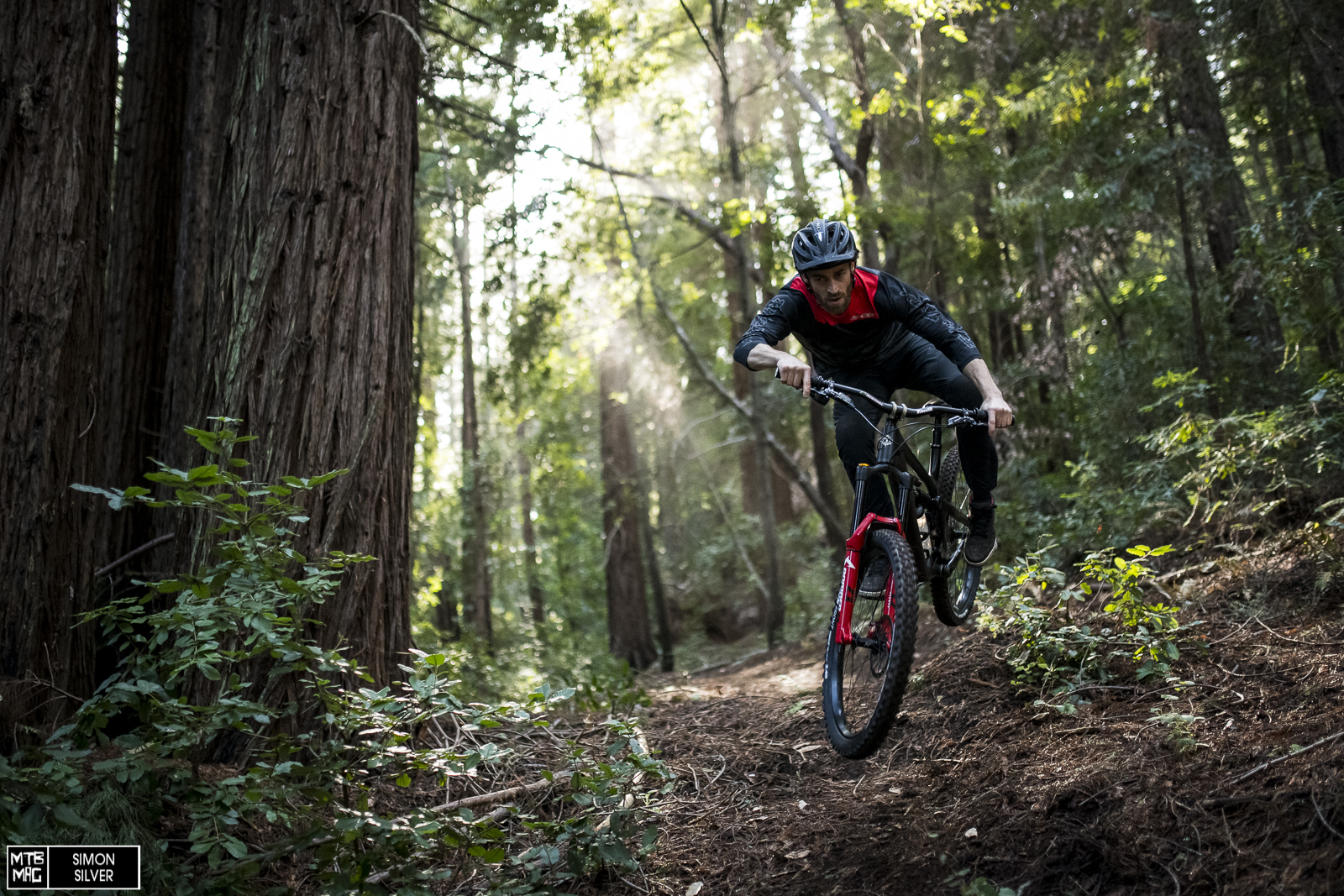 In terms of suspension action out on the trail, while it might not have loads of ton of bells and whistles or a great deal of adjustments, the Bomber CR flat out got the friggin’ job done. It’s smooth, supple and never once suffered from any sort of fading or overheating. Under a constant barrage of successive chunder, chatter and braking bumps it kept its cool nicely and never choked or exhibited any sort of panicked behavior. After just shy of 6 months of pretty consistent use, it hasn’t shown any signs that it needs an overhaul, nor have the bushings or seals appeared to been compromised in any way. As far as serviceability goes, the overhaul process would be a pretty straightforward and affordable job at a Marzocchi/FOX dealer with easily accessible seals, bushings and wear parts. When it came to big sends and hard hits, the Bomber CR handled them with aplomb, despite the fact that the bottom out bumper is kind of puny to be honest. Marzocchi says it is well worth considering your bike’s suspension kinematics before upgrading to this shock – especially if you might be putting it on a shorter travel machine. In fact, on that end of the spectrum, I also got a chance to ride a Santa Cruz Tallboy with a Bomber CR and it managed very nicely, but alas the Tallboy also a rather progressive kinematics like my Yeti. At the end of the day, this might not be the best option on a more linear, short travel ride such as a Specialized Stumpjumper, Orange Stage 5 or an Ibis Ripley for example. So, do your homework as this, like most coil sprung shocks in general, isn’t necessarily right for every setup.

To sum things up, the Bomber CR just might be the perfect coil upgrade on a budget. At just $ 299, there’s nothing on the market that can even touch it in terms of flat out value. At that price, you can afford to upgrade to a coil and still keep air shock around for backup and perhaps for longer rides where you might want to shed some weight. The Bomber CR comes in just about every size you can imagine, with Metric and Imperial offerings as well as Trunnion and Standard eyelets. With Marzocchi offering and backing it on everything from short travel trail to full DH usage, it’s no wonder we’re starting to see these things everywhere. At the end of the day, if you want to experiment with a coil on your bike without emptying your wallet, this is the best way to do so – hands down.