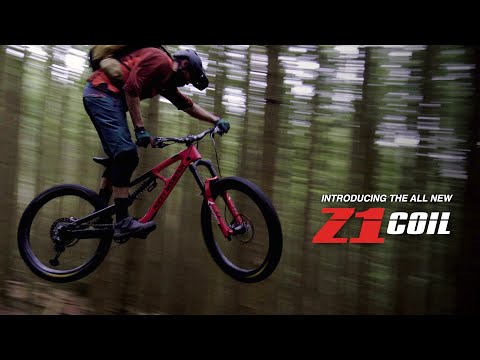 Back in September, Marzocchi was kind enough to let me get a head start on testing out their new Bomber Z1 Coil fork, which is available now. If you have an air sprung Z1, you can upgrade to the coil system for $175, but just know that once you do it’s no longer an option to go back to air. Anyhow, this fork went straight to the front end of my Yeti SB-165 Dream Bike when I first built it up, and has been a very fitting match. Over the last few months we’ve seen some excellent conditions here in Santa Cruz, which has allowed me to ride it extensively on some of our more rugged trails. The new fork is born from the already existing chassis with a new spring system which is offered in four different weights. Here’s how it’s worked out so far… 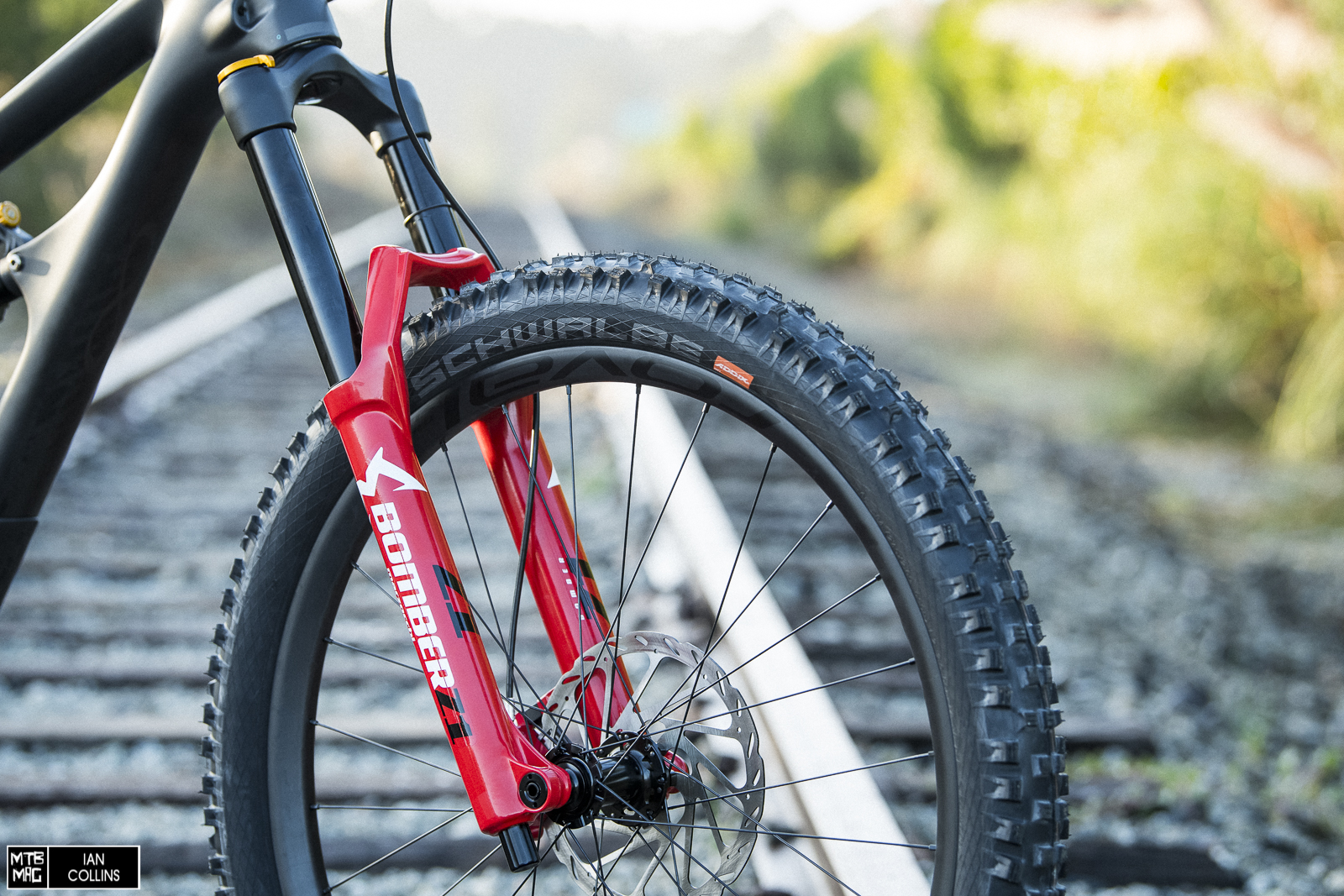 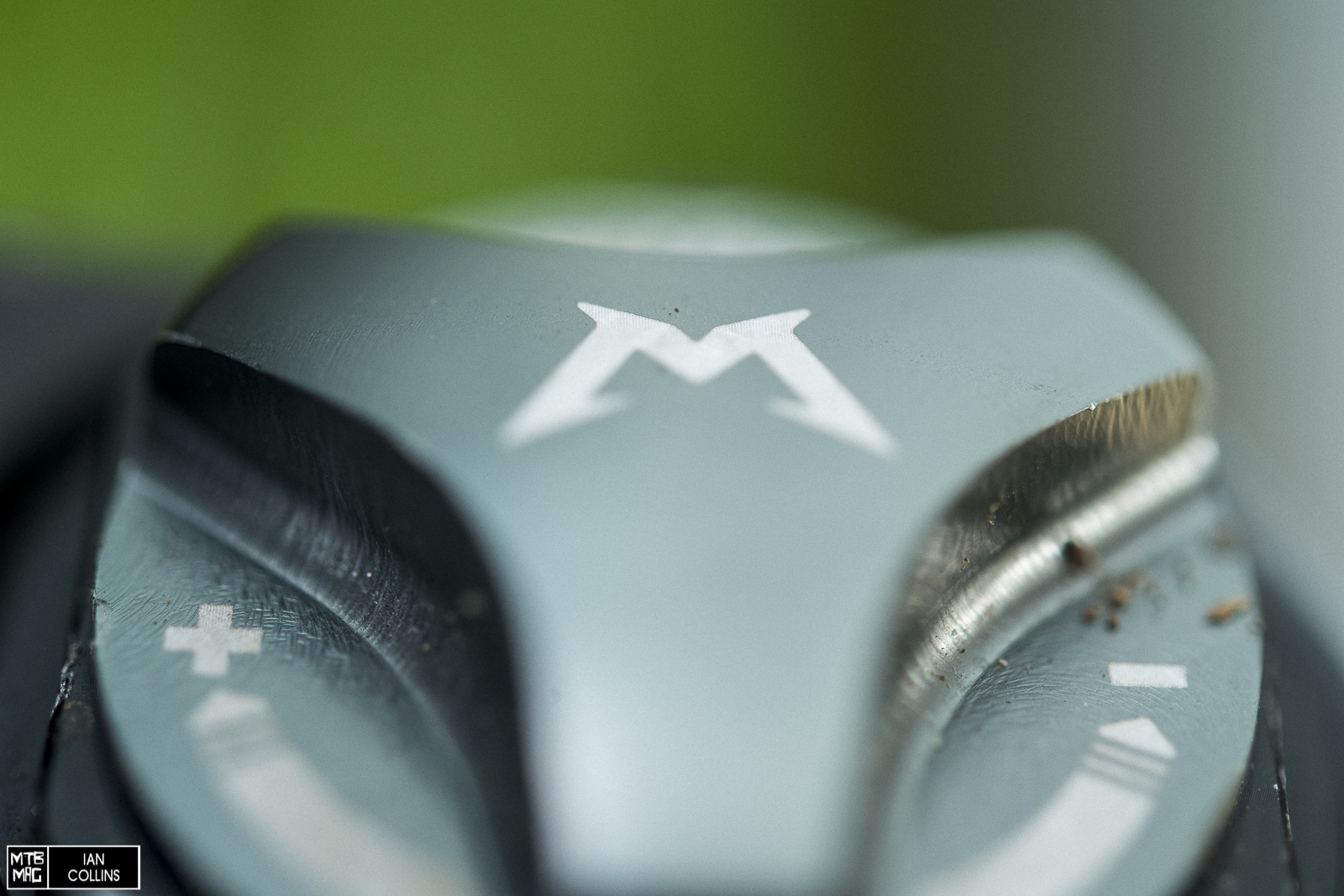 The preload adjuster looks just like the air valve cap on the current Bomber Z1, which allowed me to rip around on the yet to be released fork undetected. The adjuster offers a pretty decent amount of preload that helps bridge the gap between the four spring rates. It can also help you achieve the right sag.

Speaking of spring rates, here are how each of the four options shake out depending on rider weight and fork travel. We can confirm that the accuracy of this chart is dead on. 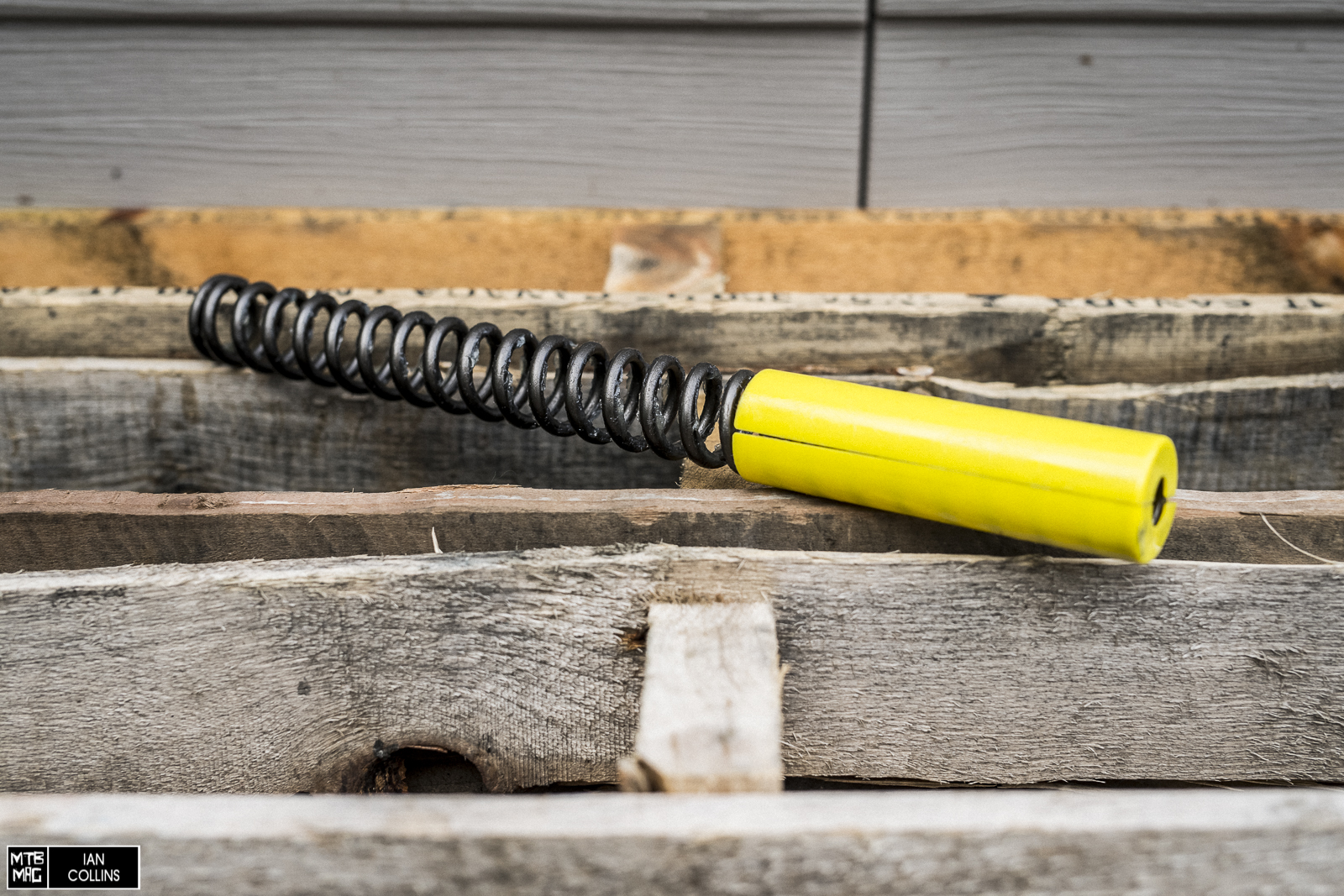 The coil spring is wrapped in a two piece plastic isolator, which helps keep it quiet. Each isolator are color coded based on the spring it mates to. This extra firm is yellow, the firm is green and the medium is blue. In any case, the fork’s action was ultra silent, so the isolator works quite well. 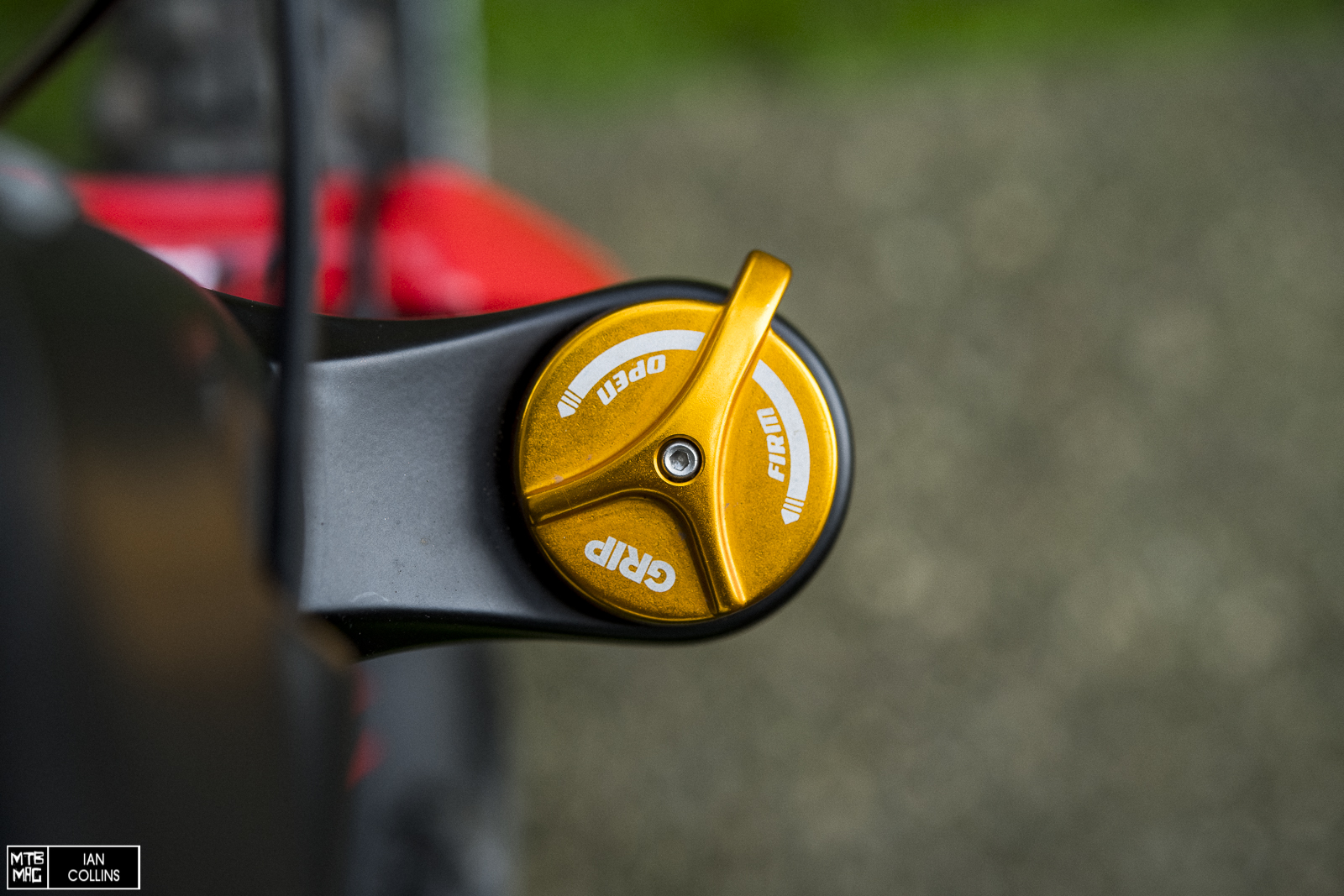 The FIT Grip Sweep damper is rather simple and all encompassing – it combines both low and high speed compression adjustment and ranges from open to full lockout. Most times, I rode it roughly around the 1:00 o’clock mark on the descents to provide a bit more damping than full open.

Interestingly, I started out on an extra firm spring, when I should have been on a firm – after it was clearly too stiff, we accidentally skipped over the firm and I wound up on a medium, which was just a bit soft, even with the preload bottomed. The cool thing about this miscommunication was that I got to feel out how each spring rating is spread apart. While the firm spring was dead on perfect for me, I found that neither the medium nor the extra firm were completely out of the question, depending on usage and taking the preload adjustability into account. The point being, Marzocchi didn’t cheap out and only make 3 springs, thus leaving consumers in the lurch. You should be able to find the perfect spring for your weight and riding style, and the preload adjuster offers quite a bit of range as well. Long story long – improved adjustability and range, one of the typical advantages of an air spring over a coil is not really as much of an issue with this fork. 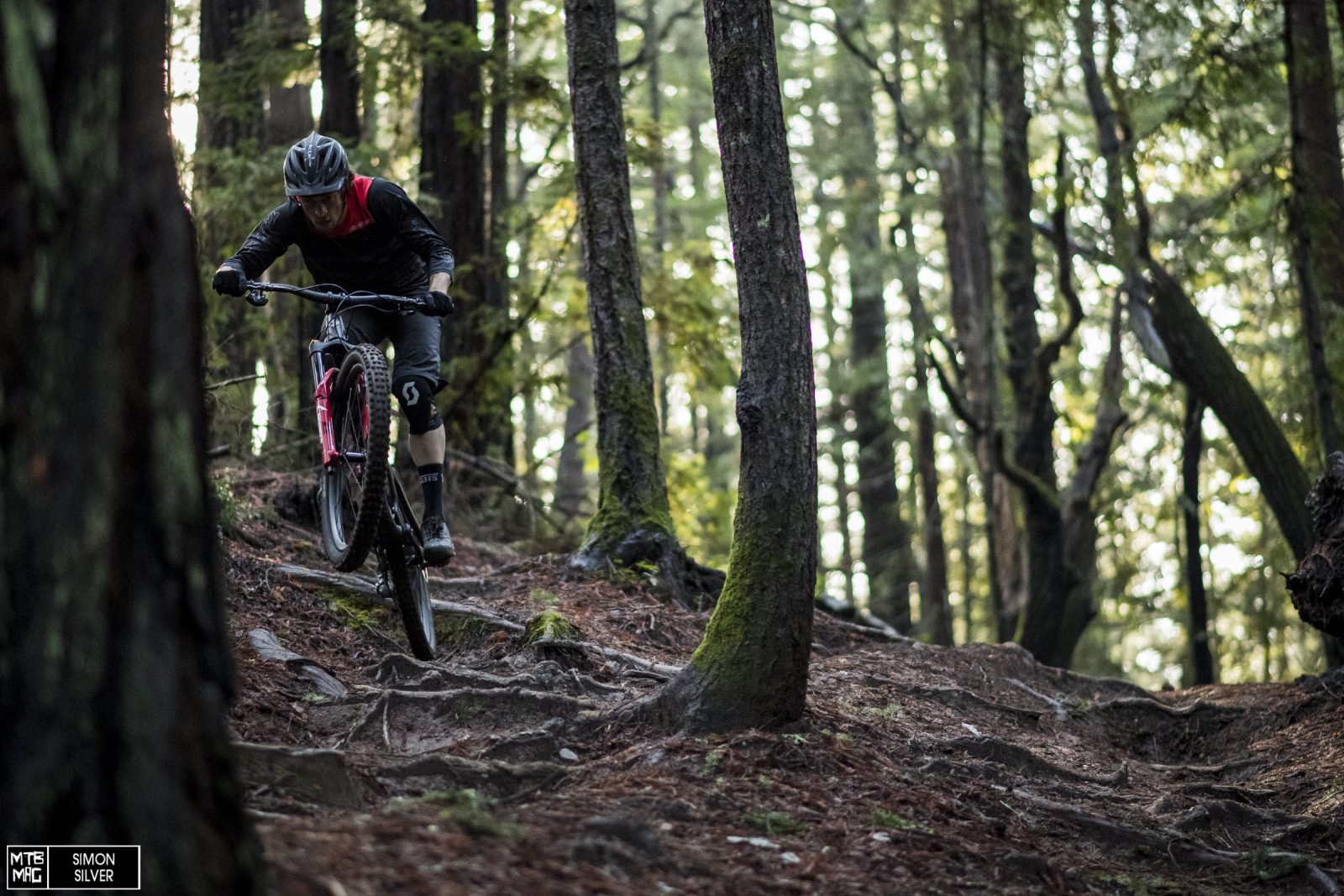 Getting down to brass tacks, there isn’t much to talk about in the way of setup. With a single, but very effective compression adjuster and an equally simple rebound adjuster, I didn’t find myself doing much dabbling. On trail, since I rode the longest travel (180mm) offering, I did use the lockout a fair bit. Most times I went to about 80% locked, which helped efficiency greatly, but still left me with some traction and give on bumps. I’ve got to say, the simplicity of the fork was rather refreshing. The widely hailed 4 way adjustable Grip2 damper is a truly excellent design, but having a version of it with far less to keep track of has its benefits too. Overall, it’s safe to dub the Bomber Z1 Coil a very utilitarian fork. 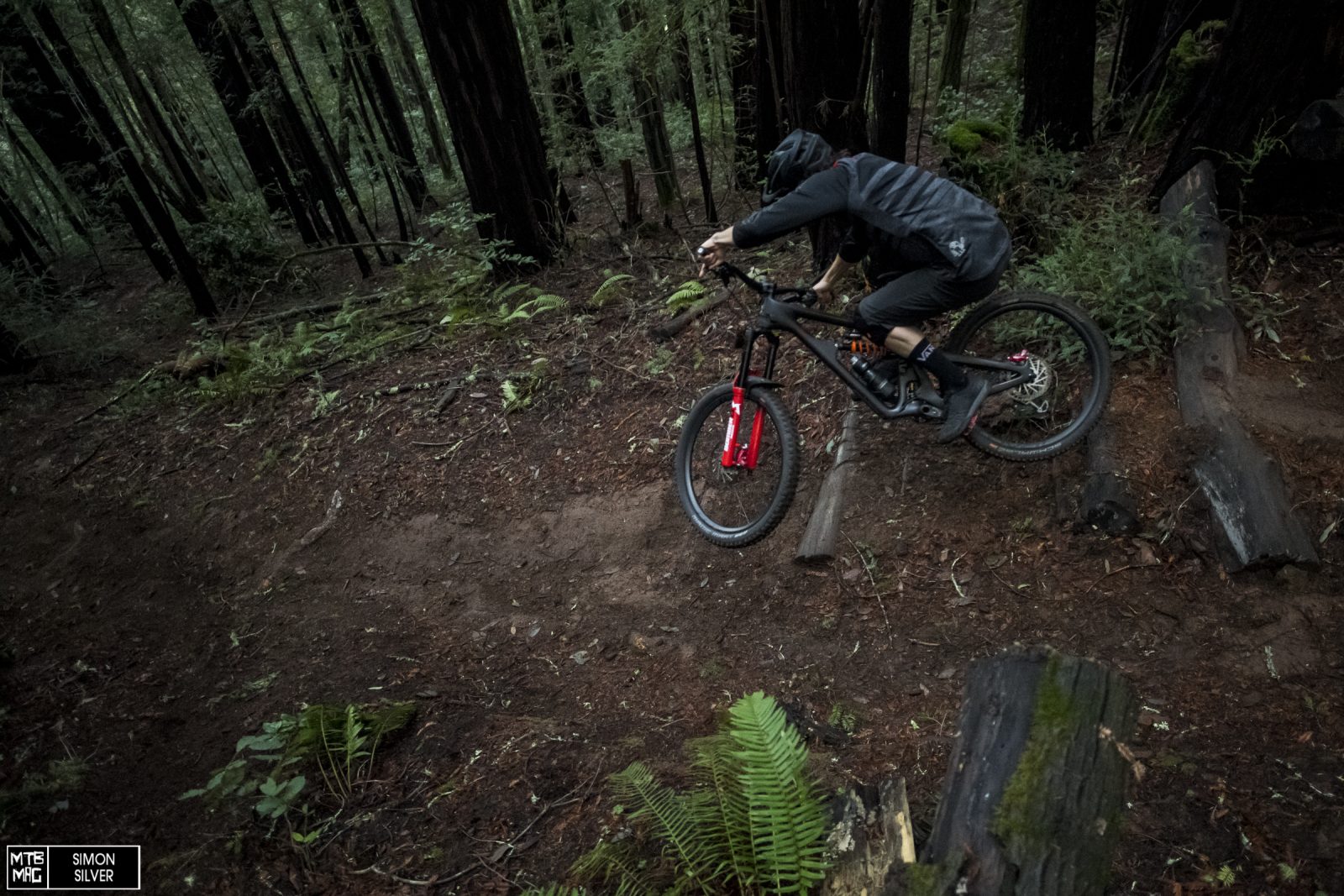 One thing I did not expect, but certainly did appreciate, was how progressive the Z1 Coil was. Typically, coil sprung forks don’t build up all that much resistance at the bottom of their travel and can bottom out rather easily. According to engineer Bill Brown: We have a trapped volume of air/oil in the lower leg that builds pressure as the fork compresses.  We use this lower leg pressure to generate spring force and control how much pressure is generated using bath oil volume.  So, the bath oil in the spring side is serving two purposes; it lubricates all the internals and it controls progressivity. On trail, I found this provided an incredible ride. Unsurprisingly, the small bump sensitivity was superior to that of an air fork. However, what did surprise me was the supportive mid stroke and the fact that no matter how hard I tried, I just could not get a violent bottom out…Even when I was riding a little under sprung on the “medium” spring. Another interesting facet was that it provided loads of pop and a lively feel. All in all, the innate feel of the spring side in particular was straight up heavenly. 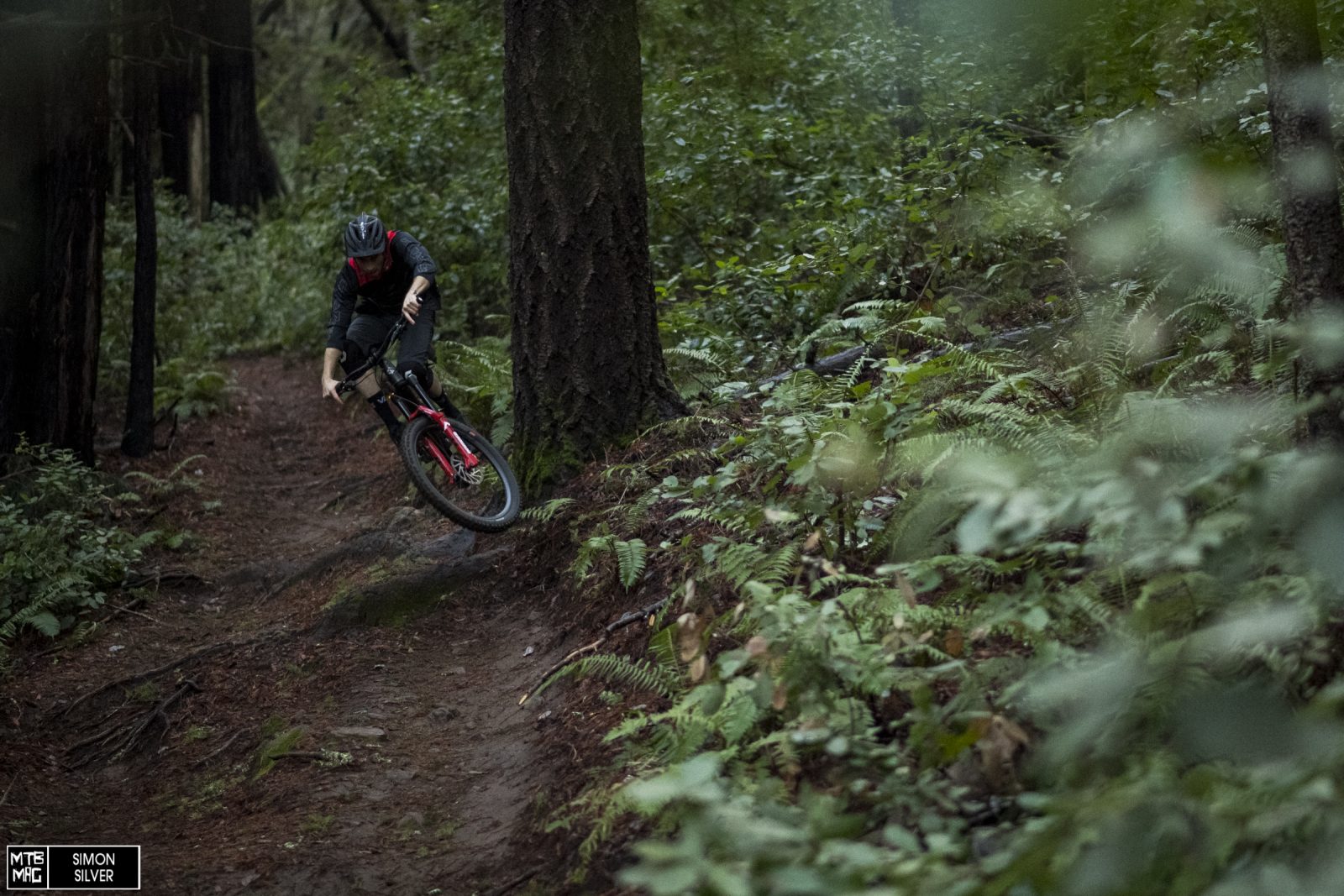 Lastly, wrapping up some basic points – with forks nicely positioned 7mm apart at 37, 44 and 51mm, the spread in offsets is logical between wheel sizes. In my case, the SB-165 called for 37mm so I was golden. As far as steering is concerned from the standpoint of the chassis, this fork was excellent. That shouldn’t surprise anyone as it shares a similar structure to a FOX 36, save for the M shaped arch, which is a nod to Marzocchi’s history. My one quip with the hardware, would be the quick release axle that comes standard – although that is a small matter, given this fork’s incredible performance:dollar ratio. The clean simplicity and light weight of the Kabolt axle was very much a welcome upgrade over the slightly clunky nature of the stock QR.

So, despite the fact that the SLS spring material is lighter than standard steel alloy, the coil spring does set the Z1 back roughly a half pound compared to its air sprung counterpart, which is already slightly portly. Spring comparisons aside, I think both Z1 forks are brilliant and really hit the mark, offering just the right amount of adjustment in a nice, sturdy chassis with controlled, predictable damping. Perhaps what’s most impressive is the price – Marzocchi is absolutely slaughtering the other big names in this arena. Ignoring weight – speaking purely from a performance standpoint regarding ride quality, the Bomber Z1 Coil is the best fork I’ve ridden to date – it’s not even debatable. Personally, I’d choose it over a flagship FOX 36 without batting an eye. However, it is most certainly is quite a bit heavier, so you’ll have to take that for what it’s worth and decide accordingly. I would think this would be the fork for Park rats on a budget and Enduro racers who are willing to look past some extra weight on the hunt for the best traction achievable. All in all, for $749 this fork is simply unbeatable.