Back in April we got our hands on the Norco Range C7.1. The “enduro” category slayer features 160mm of travel front and rear and on paper, geometry that we would personally choose if we were in charge of drafting up our own custom dream bike. The boldly painted Range frame has super stout construction as well as some interesting and completely original features and details. The spec is a pretty straightforward mix featuring some of SRAM’s finest bits. At $7115 US and 29 pounds, slightly better bang for the buck can be found, but it’s a damn good starting point. Let’s take a closer look at how it treated us. 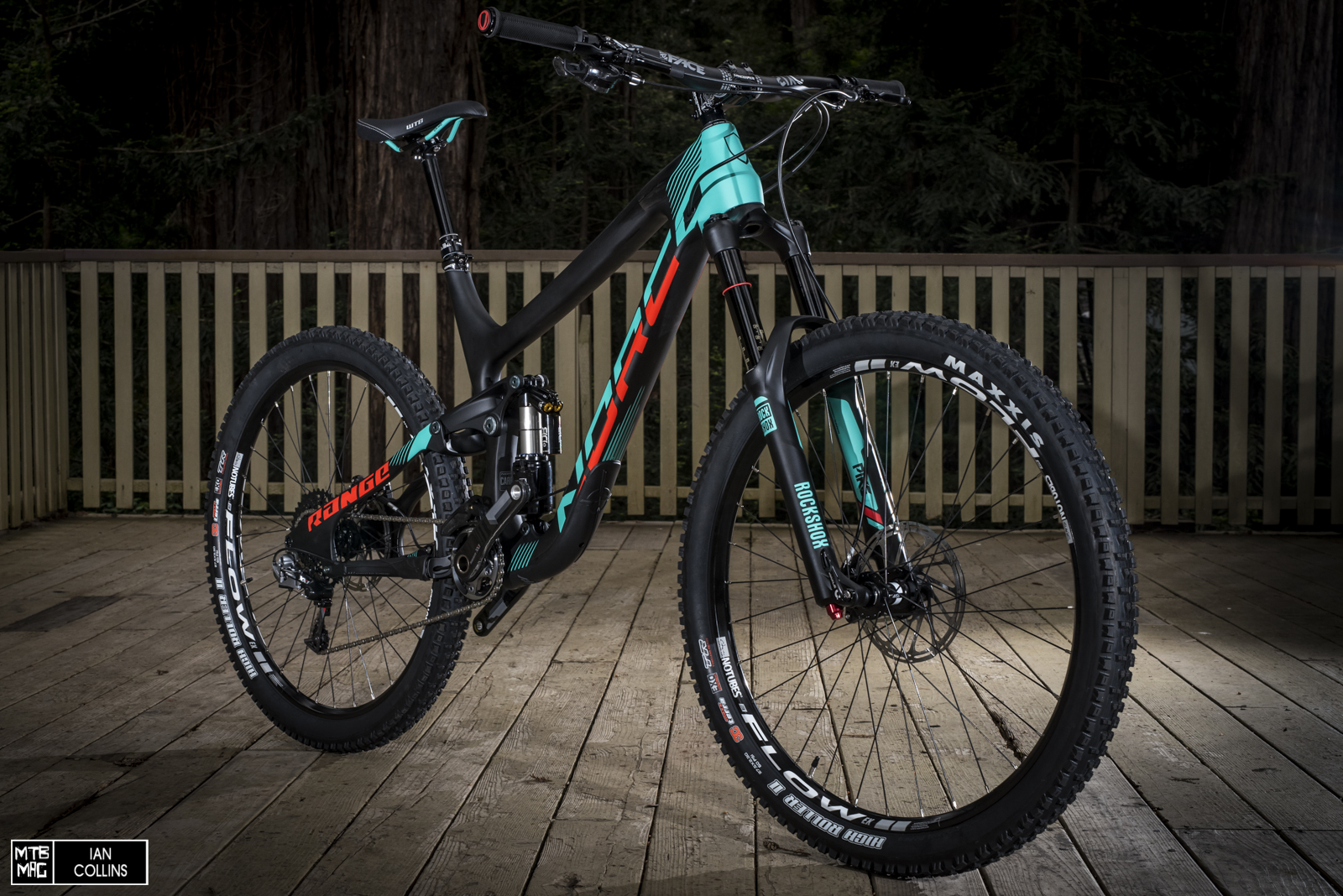 Starting with the drivetrain, XX1 is as good as it gets and is found front to back with the exception of the X1 cassette. It weighs a bit more but performs just as nicely as its XX1 counterpart. Braking is handled by SRAM Guide RSC brakes which are also tried and true. A 150mm Rock Shox Reverb is a known performer and its stealth routing keeps things easy on the eyes. The 35mm Race Face cockpit felt just right and aside from the lackluster grips and saddle we had little to complain about. DT Swiss hubs on Stan’s Flow EX rims showed up with tubes which we removed, then quickly and easily set the wheels up tubeless. 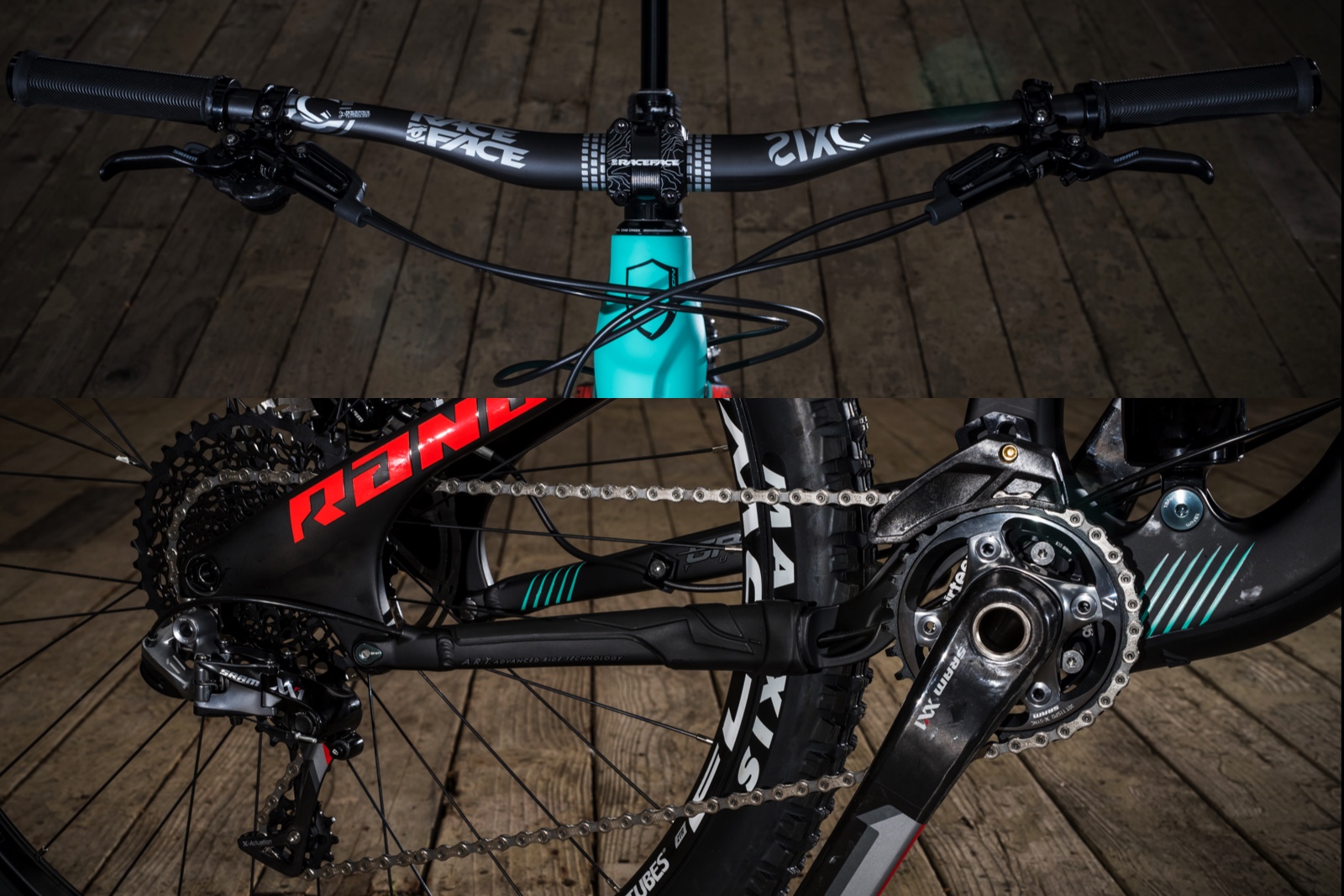 Up front we find a Rock Shox Pike RCT3 with 160mm of travel via Dual Position Air travel adjust to knock it down to 130mm for the climbs. Interestingly, we think the slightly steeper head angle(66º) and low front end of the bike doesn’t really cry out for a need of that adjustment. Anyhow, out back the Cane Creek Double Barrel Air offers a great deal of adjustment. Unfortunately our bike shipped with a unit that had a leaky seal and would only keep air for a day or so. In their defense, this is an odd glitch that likely wouldn’t make it past the show room floor at any decent bike shop…Additionally, Cane Creek was gracious in swapping the shock for us, and the new unit held air just fine.

The Range frame has a great deal of cool selling points that we really feel the need to highlight as they add a great deal of value to the bike and the rest of the industry could take some notes from them.

• Rear axle/hanger design. The 142mm X 12mm Syntace axle is designed in unison with a stainless steel hanger(which will not bend) and an aluminum breakaway pinch bolt. A spare bolt can be found bolted right into the downtube above the lower shock eyelet. You’ll never find yourself walking home because of a twisted hanger. 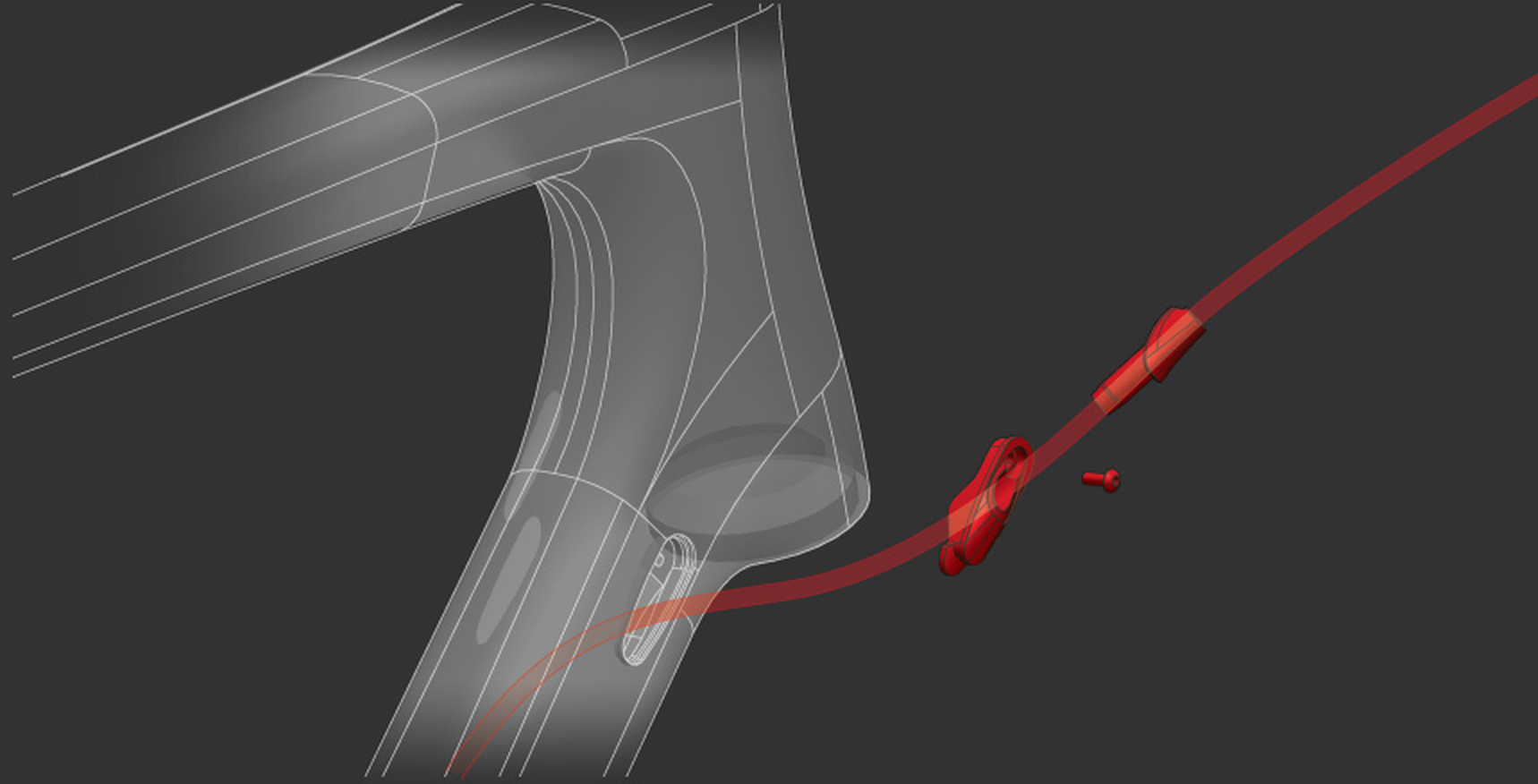 • Easy to use, noise free internal routing. See above diagram.

• Logical hardware. Most pivot hardware can be removed with just one wrench from the drive side.

• Lastly, they aren’t Norco exclusives, but the downtube and chainstay guards offer great placement and coverage.

In terms of cornering, holy hell this bike is stiff. If you push corners pretty hard, that is the first thing you’ll notice. It is so rigid that we’re confident in saying it approaches the realm of downhill bike stiffness. We always wondered how Bryn Atkinson pushed his Range so hard in THIS VIDEO. 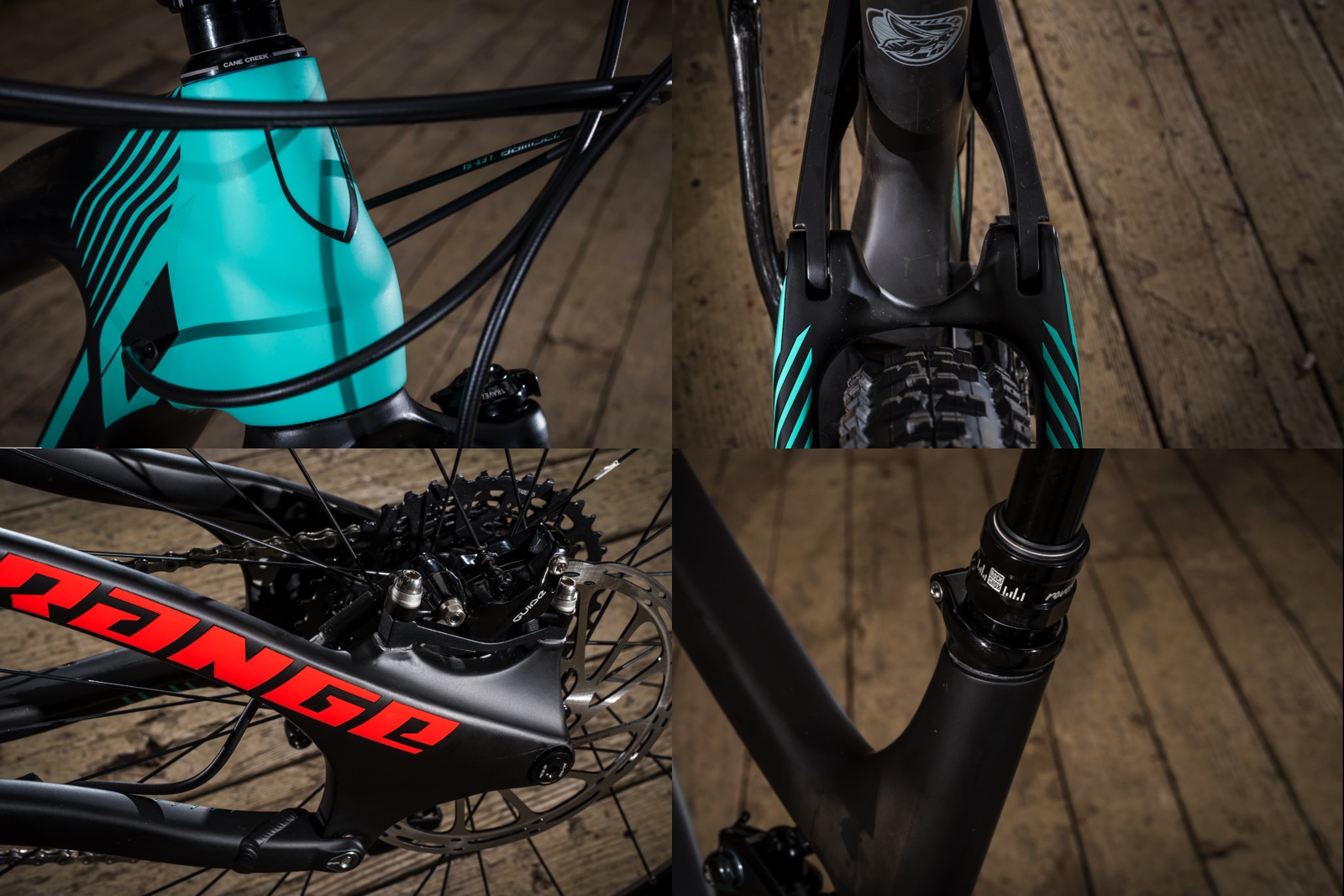 A few turns into our local spot and we knew why. How is this accomplished? A few factors. First of all, the frame itself is visibly massive and reinforced all over. The hardware and pivots are oversized, the main pivots and shock eyelet hardware utilize huge thru axles and the pivots at the seat stays completely sandwich the rocker link. 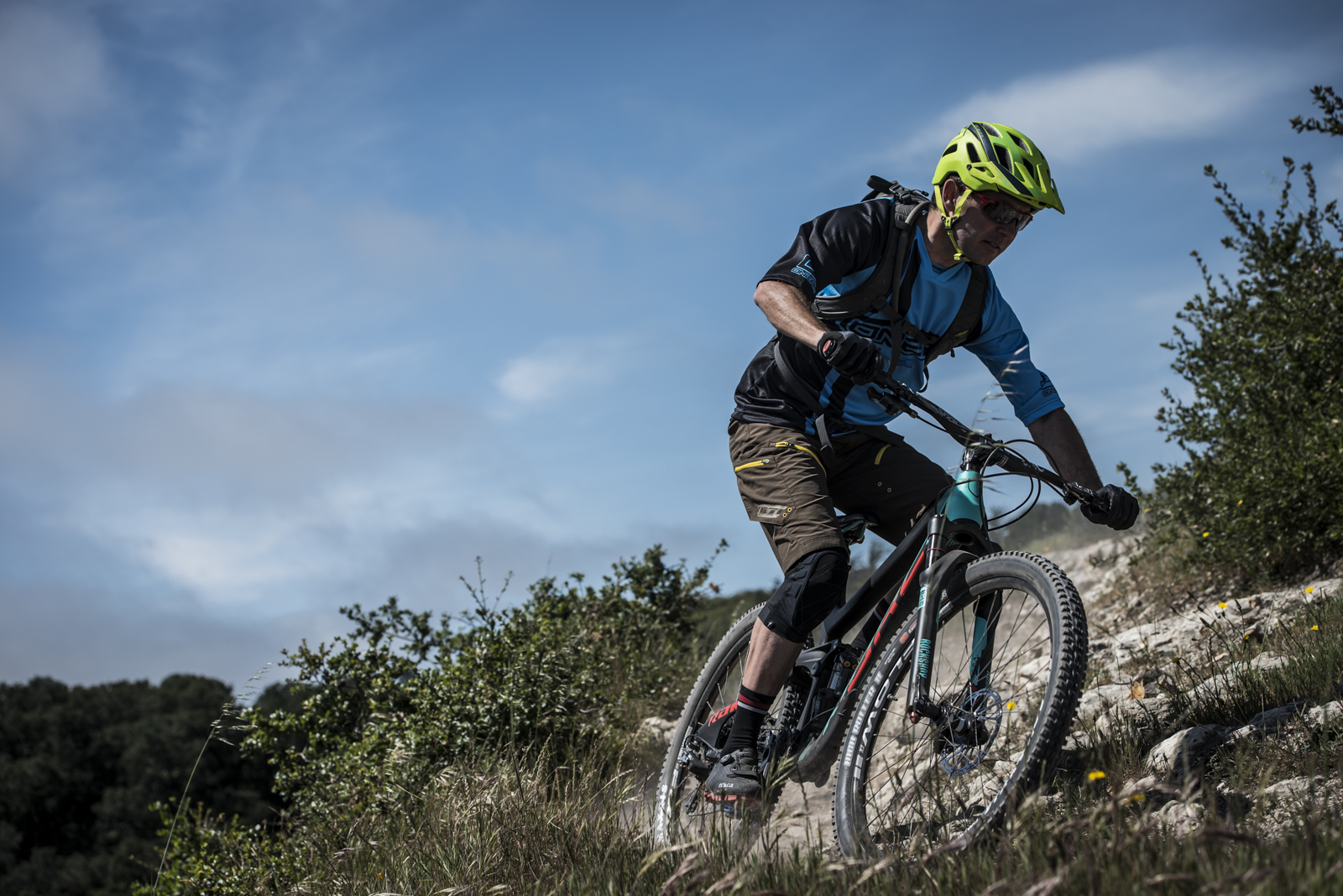 It takes more than stout construction to make a bike handle well and in this department Norco does things vastly differently than anyone else in the mountain bike world. Gravity Tune Geometry is basically scaled within each size. With most bikes as you go from Small to XL, the bikes just get taller and longer in the front end. Norco goes a step further and their rear center changes within each size. Chain stay length, seat tube angle, standover, and head tube length all change accordingly. This helps to keep all of the proportions similar throughout. That way a 5’4” rider on a size small has the same ratios as a 6’4” rider on a size XL. Make sense?

Furthermore, Norco even go as far as to utilize what they call Size Scaled Tubing. In their words : “By increasing tube profile dimensions in proportion with frame size, Norco engineers are able to calibrate frame stiffness to the weight of the prospective rider. This ensures that a heavier rider on an extra large frame will experience the same ride characteristics as a lighter rider on a small frame. Though the process is labour-intensive, the result is worth the effort: optimal ride characteristics, performance and comfort for riders of all sizes.” 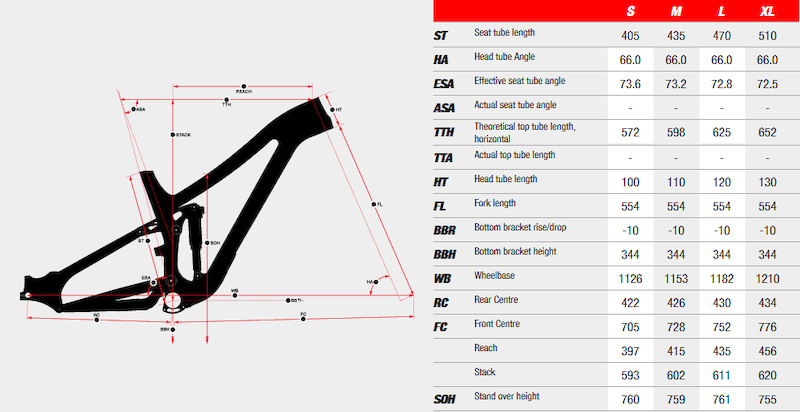 With regards to geometry we heavily praised the bike already. To elaborate on that we’ll break down exactly what we liked so much. Most bikes in this category have a 65º head angle, which we find to be a bit slack. In our opinion, a bike can gain some stability with a longer top tube and thus won’t need such a slack head angle. This is exactly what the Range benefits from with a 66º H/A. Additionally, the bike steers a bit snappier on the flat bits and climbs than much of its competition…this is also partly due to the fact that it features a short 50mm stem which the longish 625mm top tube plays nicely with. Hats off to Norco for this, we’ve tested far too many “enduro” bikes with short top tubes and 70mm stems, which – in our opinion, there is no place for on 160mm bikes that are meant to be raced and charged on aggressively.

A somewhat steep 72.8º effective seat angle kept our weight forward on the steepest of climbs but perhaps our favorite element of this bikes layout is it’s short 430mm (16.9 inch) chaintsays. The bike was super snappy in the turns and could manual like a champ. A 334mm (13.5″) BB height was just right – low enough to dig into the turns but not a liability in the super chunky rocky bits either. 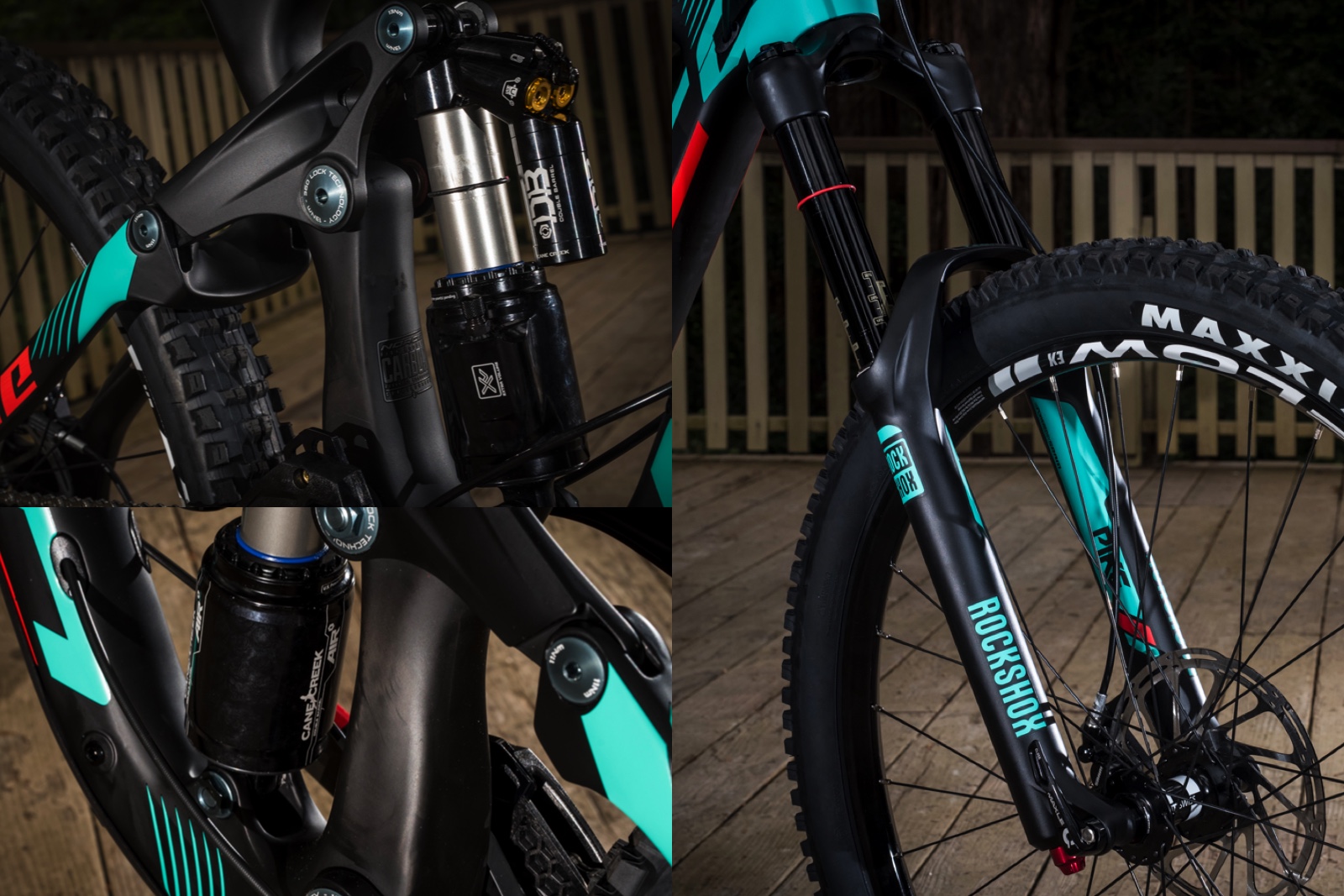 OK, you get it. We loved the geometry – now let’s talk suspension. We’ll start up front with the Rock Shox Pike RCT3. We’ve had experience with this fork in the past and it is great. However, we much prefer the refined feel and spring curve tuning on offer with the Solo Air cartridge version. That said, some may value the option to get the front end down to 130mm travel on really steep punches or long toilsome climbs. Really it all comes down to a matter of preference, but hard charging riders will likely prefer the Solo Air.

Out back Norco has hit the nail on the head with their A.R.T.(Advanced Ride Technology)suspension. Aside from some subtle bob on the climbs, the bike was quite efficient when it came to pedaling. When you really mash, the support is there and the Range sprints well. The low placed pivot that interrupts the rear axle and main pivot helps to ensure a rearward axle path. This is ideal for carrying speed and not hanging up in rough terrain. The suspension curve had a nice bit of pop and progression to it keeping the bike lively. It was light off the top, supportive in the mid stroke and ramped up nicely without bottoming harshly. Lastly, we found the suspension worked well under braking. It didn’t squat or jack noticeably. We have ridden other bikes that maintained a bit more traction and felt a bit more neutral, but the Range was pretty damn good compared to the rest of the market. 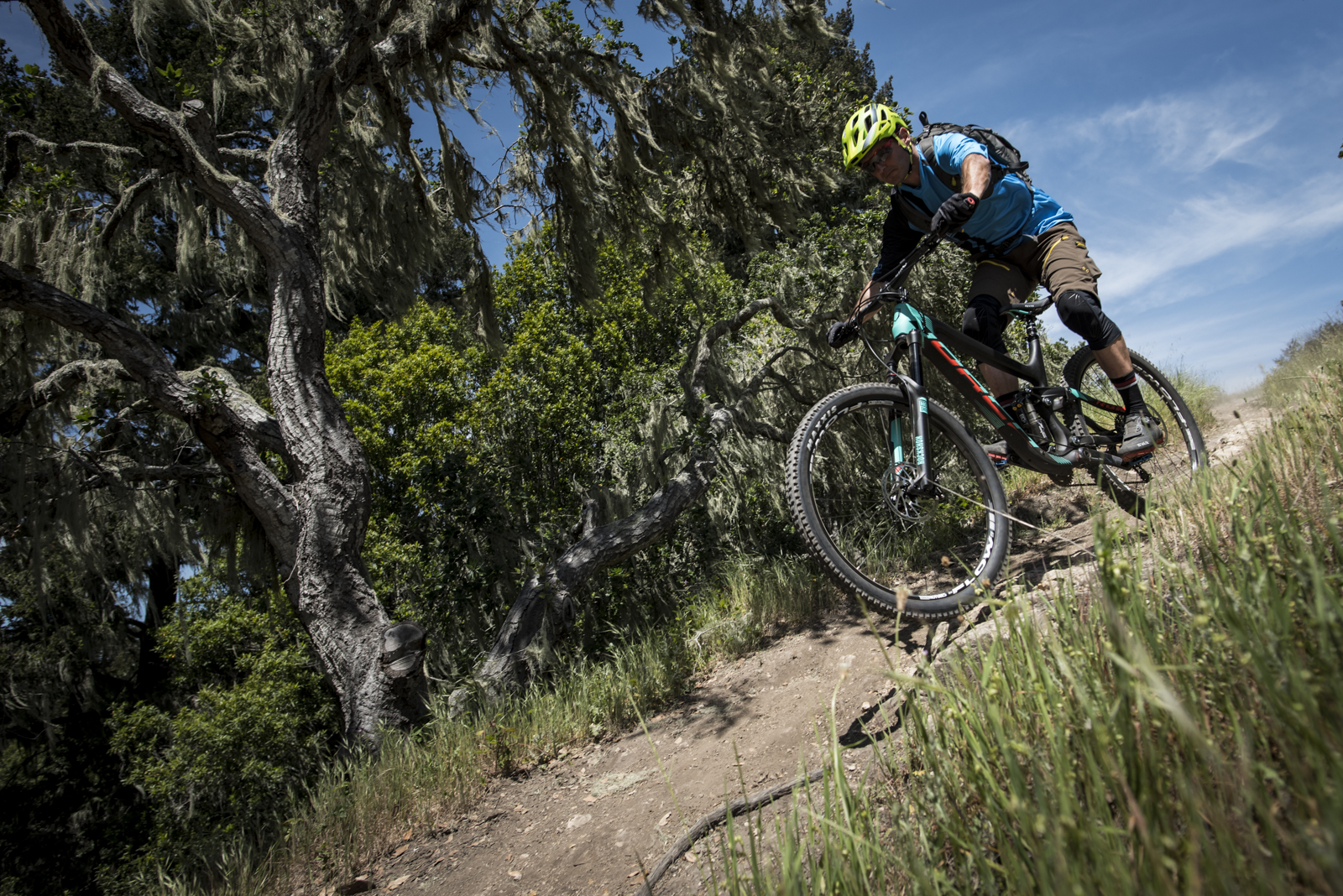 Now, moving away from kinematics/frame layout and over to the actual rear shock itself, we were less than pleased. While some riders may find it appealing that the Cane Creek Double Barrel XV(extra volume) rear shock offers infinite adjustability, we were a bit miffed by how vague it felt. We started with the recommended base settings and dabbled in all directions from there but just never got it to feel quite right. Compared to other shocks in this category, it simply didn’t feel as good. It was sticky, wallowed a bit and didn’t resist bottoming as well as others. Praise is due to Norco for spec’ing an 8.5” X 2.5” eye to eye rear shock. That gives the Range a nice low leverage ratio and makes it easy to fit a coil or DH air shock if you so desire. In our time spent aboard the bike we fitted a DVO coil shock and a RockShox Monarch Plus Debonair for the sake of comparison and curiosity. After spending time on those shocks, the frame’s suspension layout really shined.

As mentioned, we weren’t that happy with the WTB saddle or the Norco grips and that’s not a huge surprise. Most riders swap contact points on a bike before they even take it home. We spent a great deal of time aboard our Ergon SMR3 saddle and our go to Sensus Swayze grips. No hard feelings about that. As for tires we spent limited time on the Maxxis High Roller II tires that the bike was spec’d with. They’re fantastic tires on hardpack and in dry, dusty conditions but we spent a great deal of time riding deep in the loamy woods of Santa Cruz so we swapped them for a few different tires over our time spent on the bike. Overall, the High Roller II’s are awesome but not our cup of tea for where we were riding.

So where does this bike stand? It’s fantastic. The frame itself is the standout minus the lackluster rear shock. The drivetrain, brakes, seatpost and wheels were all great. For the price we’d like to see a slightly more refined wheelset but we’re splitting hairs as the Stan’s did a fine job despite lacking the poppy, lively feel of a carbon wheelset. If we were in the market, we’d likely opt for the Range C7.2($5465). It’s spec’d with better suspension and we’d take the $1650 we saved, buy some carbon wheels and call it a day. That said, some consumers may appreciate the options and adjustability offered in tuning out back and travel up front offered by the C7.1. As they say, to each their own…The bottom line is that this is far and away our favorite 160mm frame by a long shot. The Range strikes the perfect balance between rock swallowing, hard charging attitude, and nimble, lightfooted grace. It’s a monster in the turns, and it pedals well for a bike with this much travel, but best of all it is incredibly stiff and has flawless geometry. We look at all of its unique features as the icing on the cake. If the aforementioned appeals to you but you aren’t sold on the slightly steep price tag, Norco sells the bike as a frame only and offer 4 different spec levels. 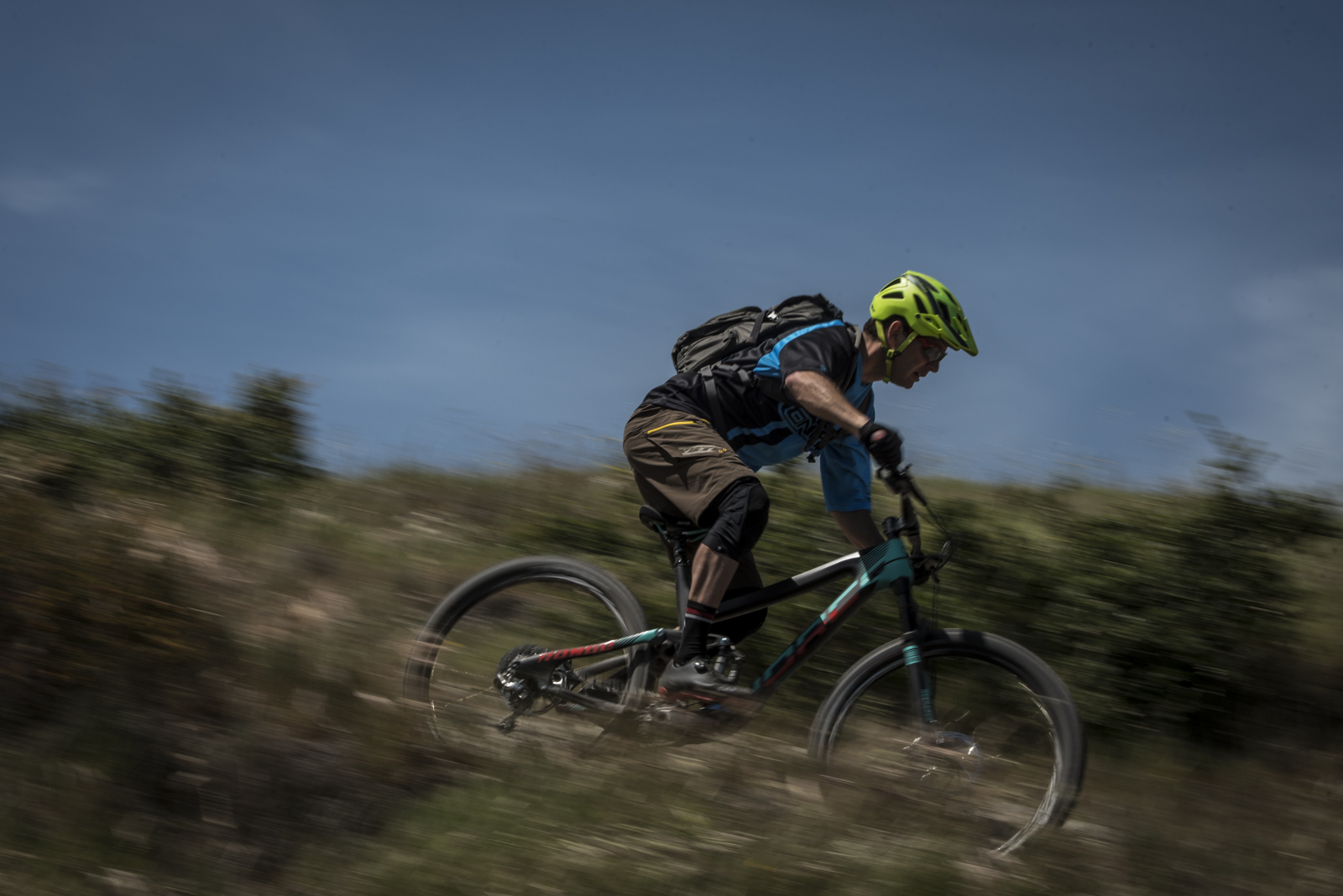 The Rebirth of Ellsworth Bicycles