I initially heard about Ochain via our Italian pages a few months back, and since our test video was in Italian I could only decipher very little of Marco’s findings. When I asked him about testing one and what his thoughts were, he simply said: I’ll send you mine so you can find out for yourself … or words to that effect anyway. The point being that he wanted me to conduct a test untainted by any preconceived notions.

Anyhow, he fired it across the Atlantic Ocean and it eventually made its way onto my Yeti SB-165 personal bike. Before I dive in, a little bit about the device and then why I chose the Yeti out of the many bikes that are currently filling up the garage to my wife’s dismay. 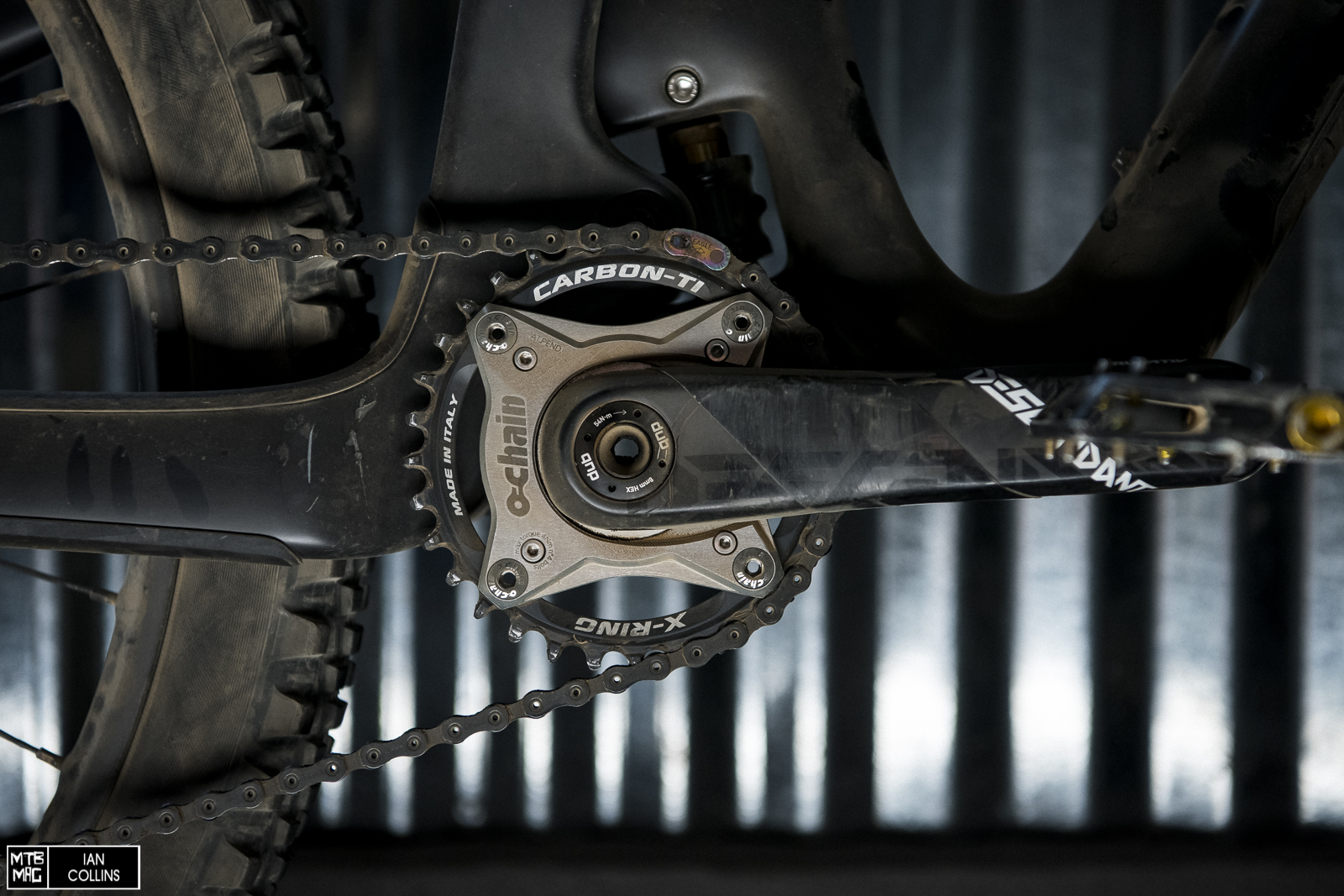 Ochain is a device designed to reduce or eliminate the harsh feedback from pedal kickback which you feel in the pedals. Pedal kickback occurs to a varying extent on mountain bikes as the rear suspension cycles through its travel, particularly over rough terrain. Different suspension kinematic systems vary in how much they exhibit this behavior based on their individual designs.

Ochain openly acknowledges the real world fact that a great deal of this involves tradeoffs. You can find some very detailed, and surprisingly neutral, information here. Interestingly, one of the motivations for Ochains development was the obvious gains involved in chainless riding, as displayed by Neko Mulally and Aaron Gwin in their legendary world cup runs with no chain, with the latter resulting in a shocking win.

In short, on many bikes, riding with no chain will improve traction and compliance, but the tradeoff is that the bike will feel a bit more wallowy as there are no chain forces to effectively push off of as they firm up the rear suspension. Ochain is essentially a floating spider which sees elastomer pucks that allow for an additional 6, 9 or 12 degrees of spring backed lag before engagement. It should be noted that is in addition to your hub’s standard degree of engagement.

Speaking of engagement, my Yeti SB-165 has a fair amount of pedal kickback, but not so much that it was too bothersome with the middle of the road 54 tooth star ratchet system (6.66º engagement) in the Roval wheels that I was initially riding. When I switched over to a set of crankbrothers Synthesis E11 wheels, featuring Industry Nine Hydra hubs, it became surprisingly harsh and would hang up in rough terrain.

The i9 Hydra hubs have a whopping 690 points, for .52º engagement, which is basically instant, thus increasing the felt effects of pedal kickback. Long story short, this bike made for the perfect testing ground… 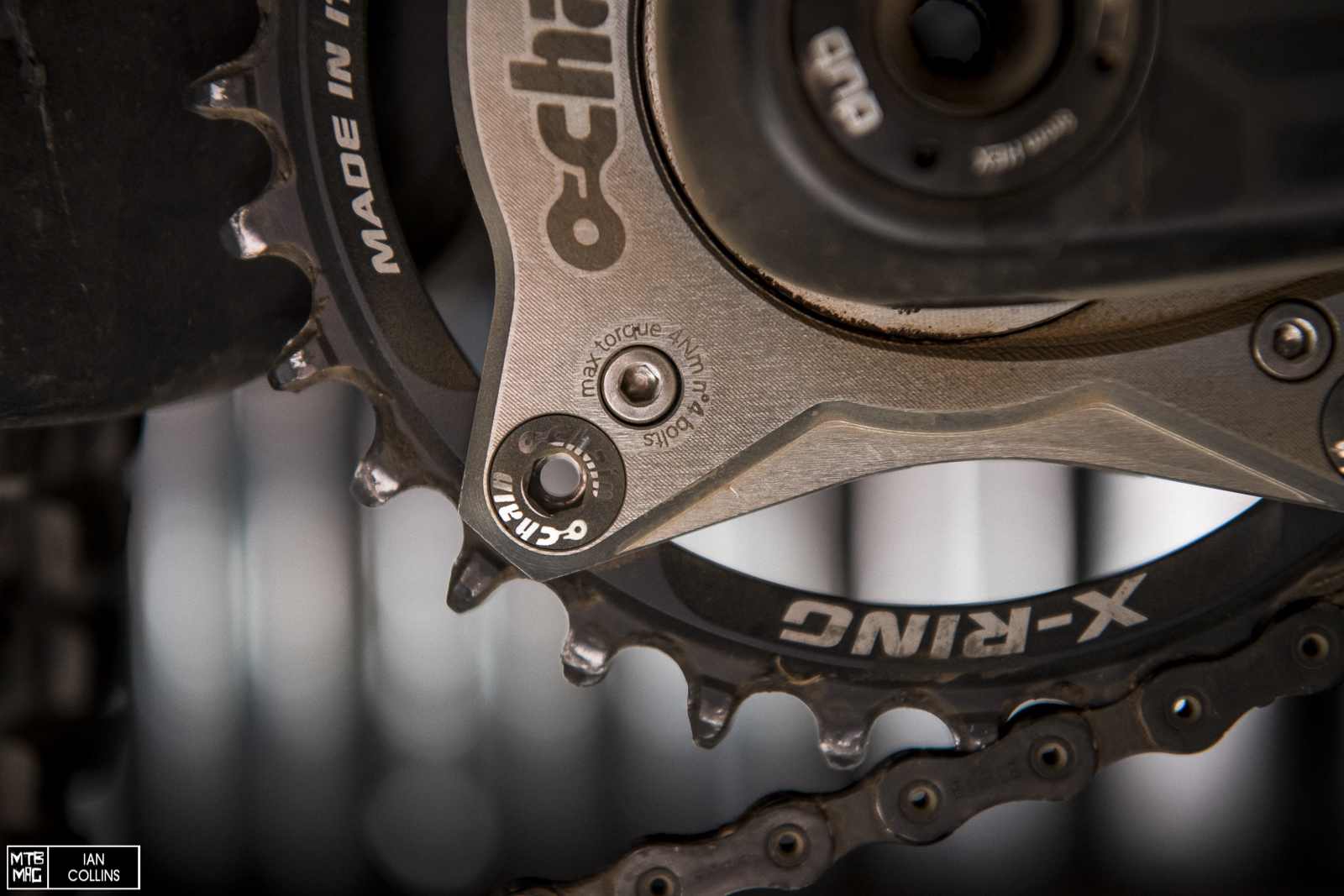 At the moment, Ochain is offered in Boost spacing only. These days most bikes have adopted that standard anyway. The device features a 104mm bolt circle diameter, so you could potentially use some other chainrings, should you choose and if they clear.

The included chainring is of a very high quality and features a narrow/wide pattern that’s eerily similar to SRAM’s X-Sync design. I haven’t verified, but I assume that it’s licensed, taking the route that brands like Chromag have chosen to go. 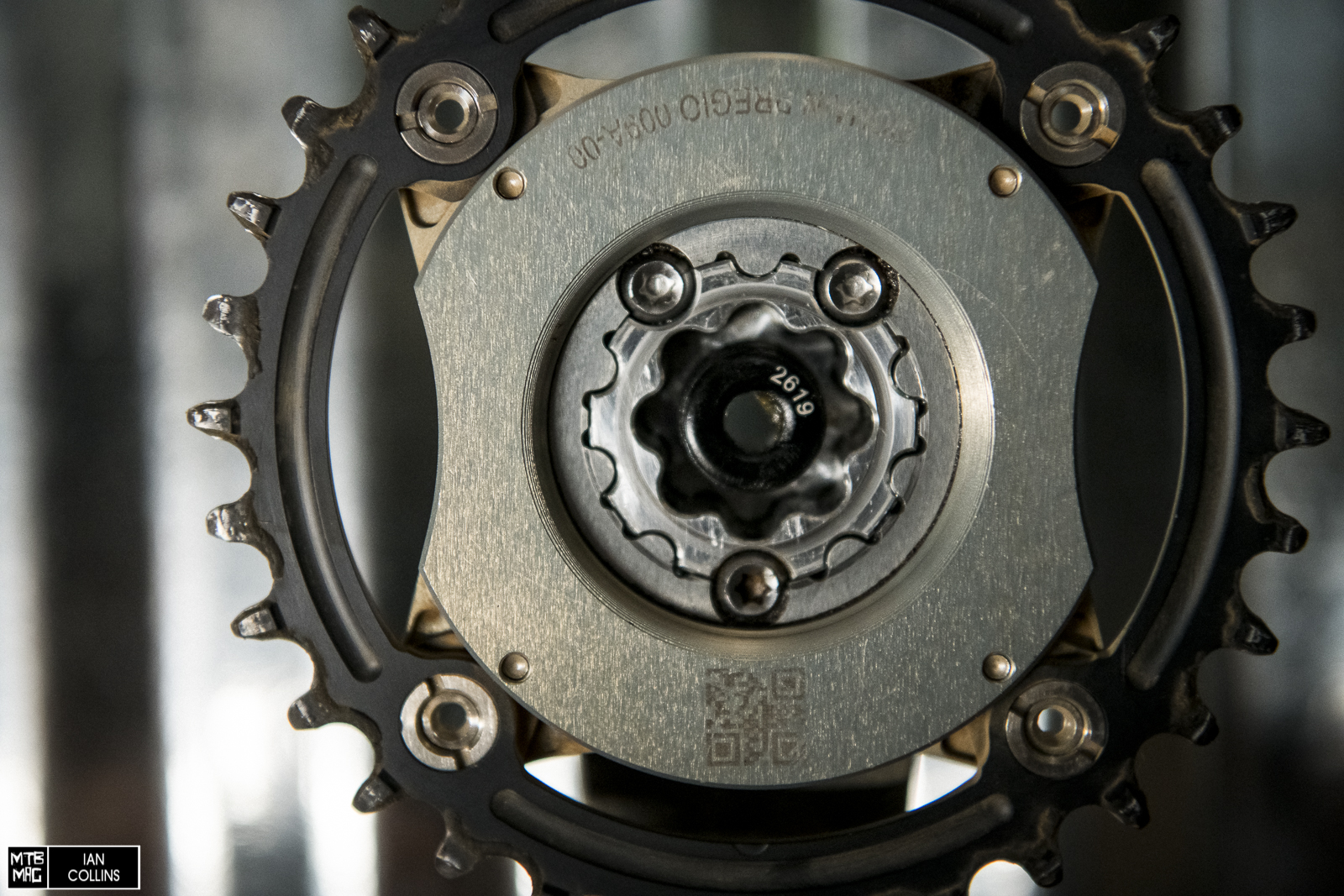 At the moment, Ochain offer spider fitment for SRAM, Hope, E*13, Race Face and Ingrid. As you can see above, we’ve tested the SRAM version. 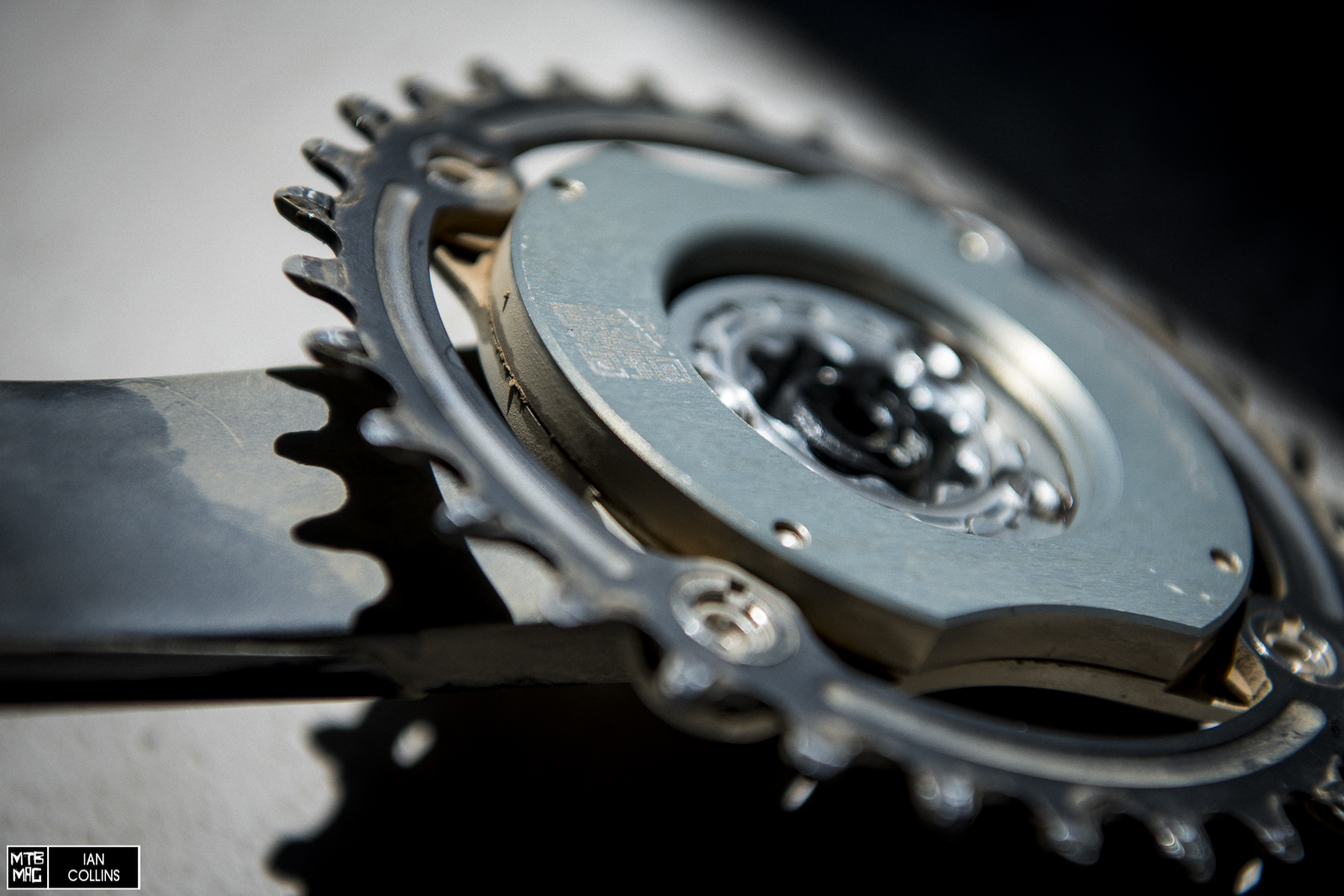 If you look closely, you can see a bit of dust collected on some surface lubricant, to the left of the QR code. This shows the gap between the plates which rotate and allow the chainring to float a few degrees. 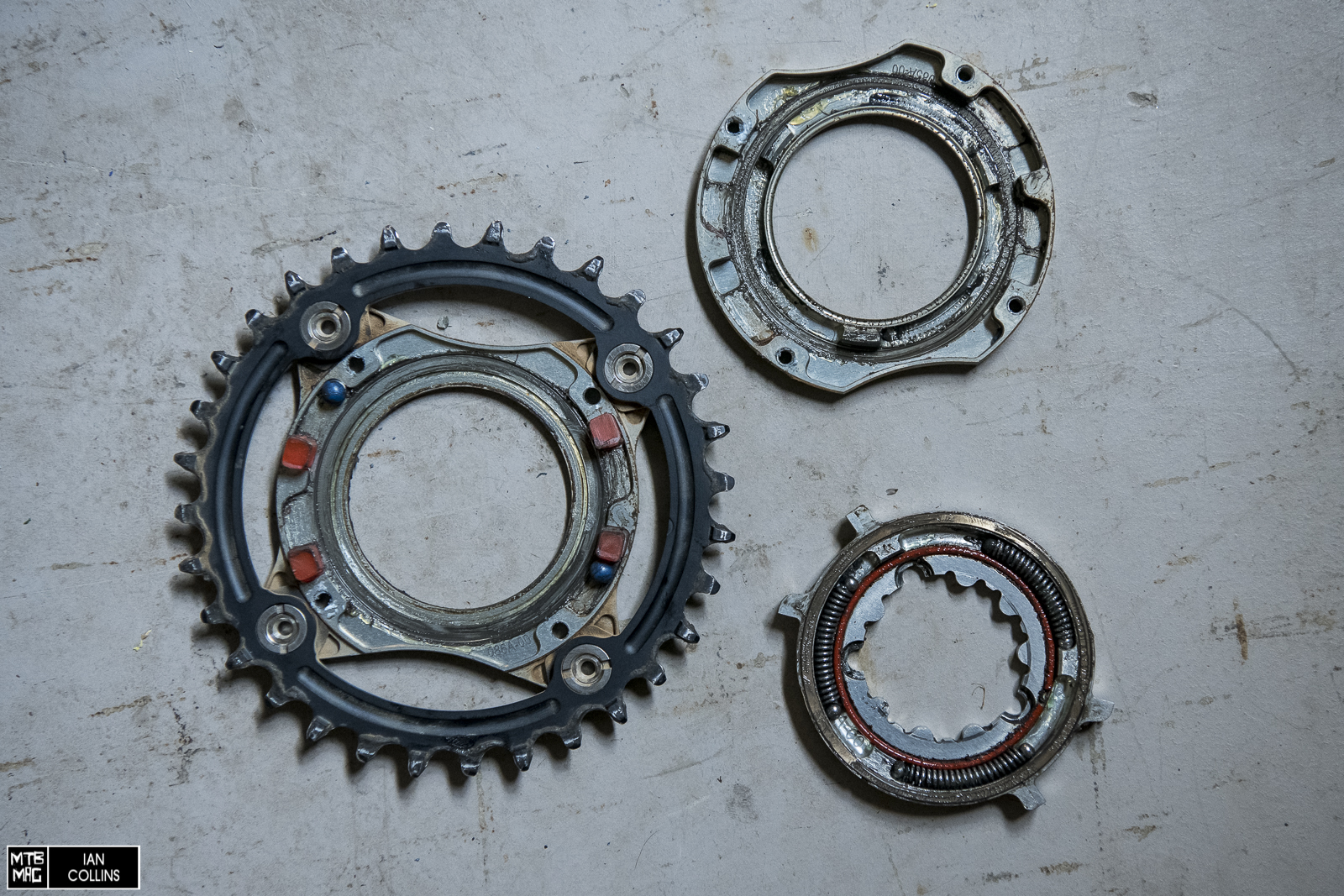 Cracking open the Ochain via its four screws reveals a surprisingly complex inner working, with seals, springs, elastomers and a labyrinth of containment channels for all of the above. Seeing what’s inside will give you a greater respect for the engineering and manufacturing process that’s gone into it, and thus the price tag as well. 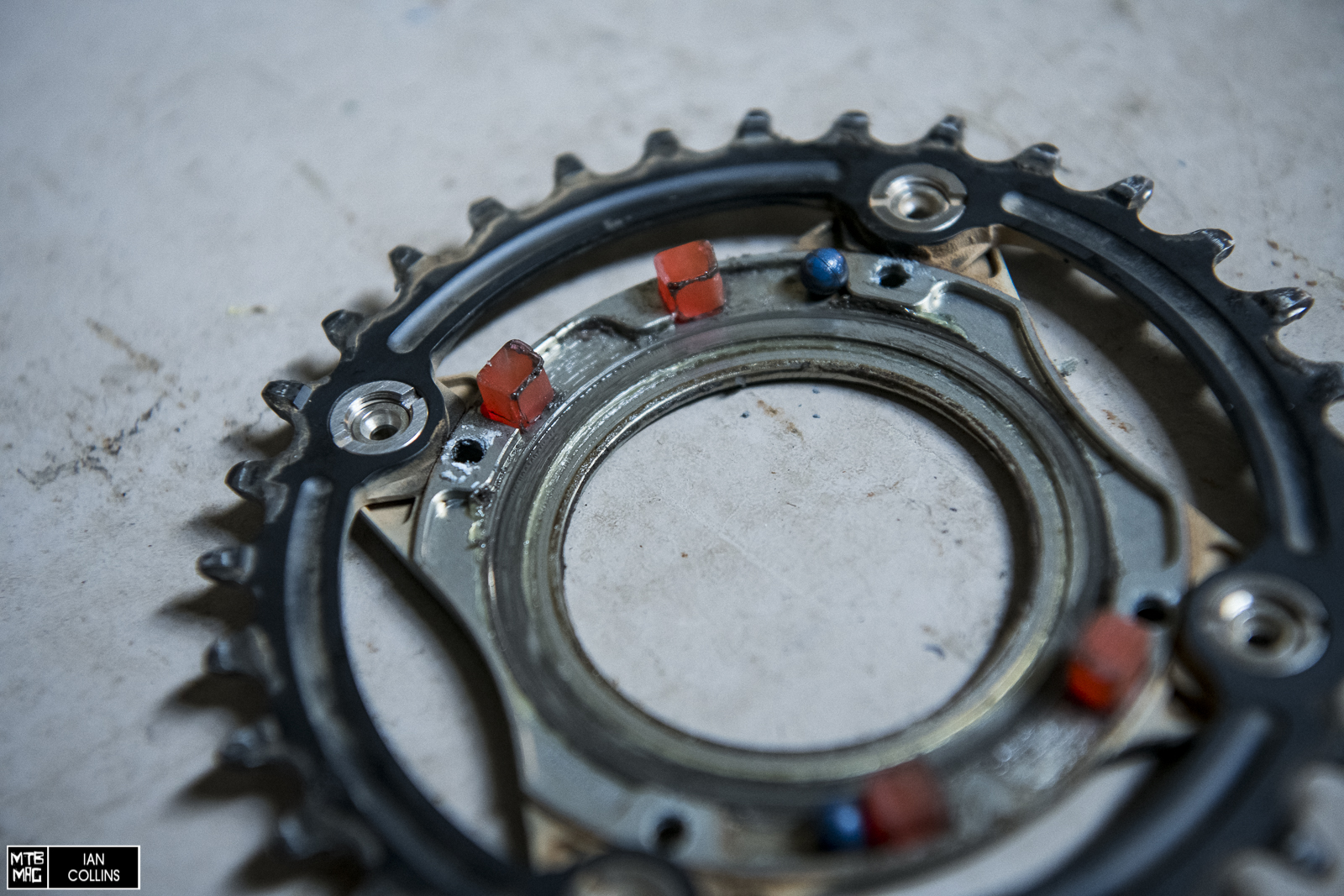 After a straightforward ten minute installation, I made a point to bounce my bike around the driveway for a bit. What I found interesting was that once the Ochain was installed it had a distinctly different feel from anything I’ve ever ridden. While blazing fast hubs provide instant engagement and slower hubs have a noticeable lag before engaging, you can feel that the few degrees of lag are now held under the subtle tension that Ochain provides due to its springs and elastomers. I got used to it rather quickly, but there was obviously a noticeable contrast compared to the Hydra hubs’ near instant bite.

The fact that Ochain offer the three varying elastomers is a wise move as it allows consumers to tailor the feel based on their particular hub, the terrain they ride and the on trail feel they’re after. For example, if you have a hub with fast engagement and you’re looking to eliminate as much pedal kickback as possible, your best bet is the 12º elastomer.

Conversely, if your hub is on the slower side, you’ll likely be fine leaning toward the 6º end of things. Anyhow, after a few minutes of pedaling around the new and foreign feeling quickly became an afterthought and my bike now felt loosely equivalent to having a 36T hub, with some soft tension.

My time spent testing mainly took place at Silver Mountain in Idaho, which is not for the faint of heart. Rock strewn and rough as guts, Silver is full of braking bumps, ruts and deep holes. In other words, it served as the perfect test lab for the Ochain’s claims of a smoother ride… 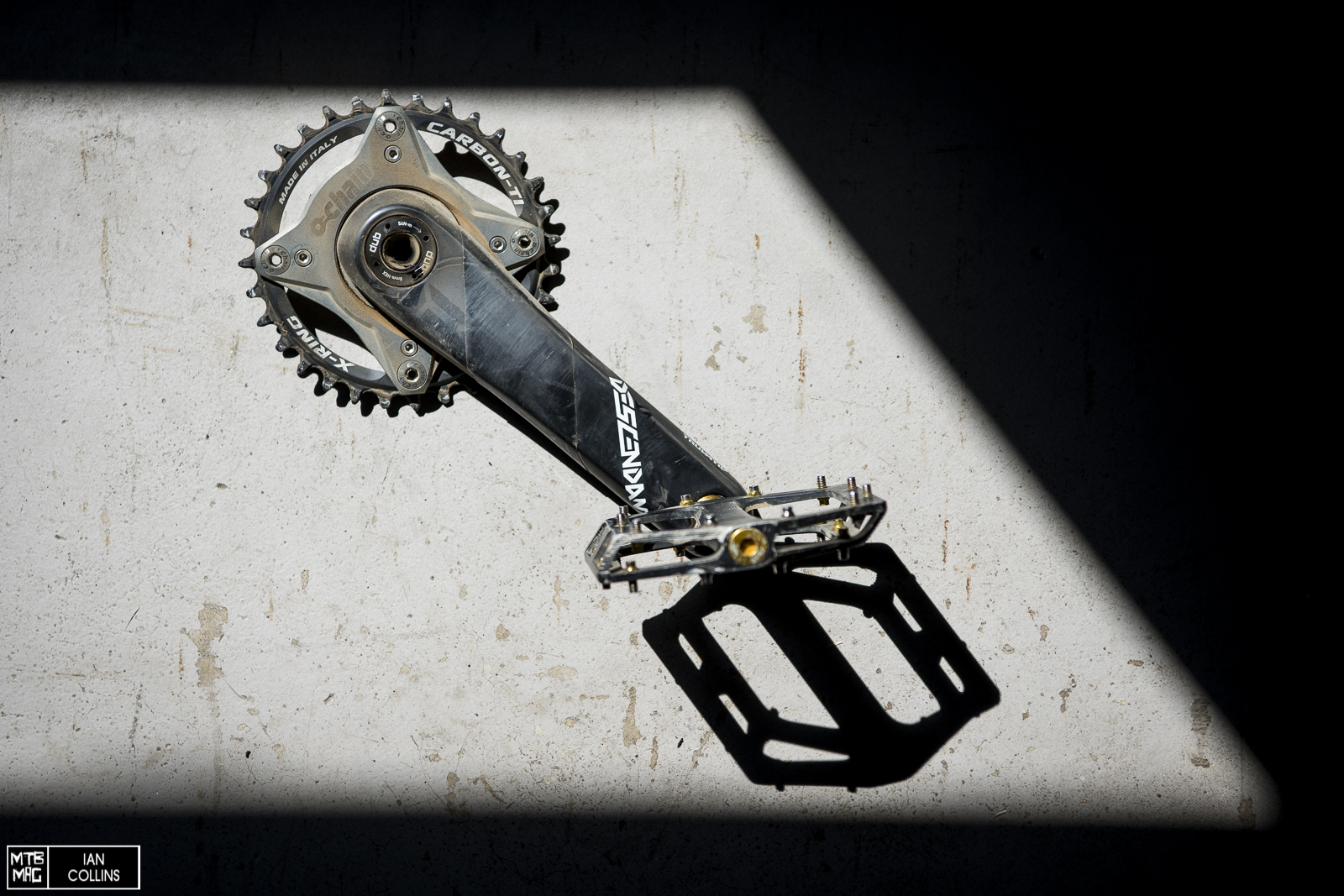 Starting out with the 9º elastomers, straight away I noticed an immediate improvement and reduced harshness coming through the rear suspension and into my pedals. This made for improved traction and a more planted feeling on the bike as I was getting rattled substantially less.

This smoother ride tended to shine through the most in low to mid speed sections of trail with features such as roots, babyheads and awkward stepped cascading bits. I also felt a pretty big improvement in braking bumps and slow speed hucks to flat.

Well, on the flip side, I did notice that my rear suspension had a more “endless” glued to the ground feeling. Therefore, events where I was pushing off of it were met with a slightly slouchier attitude. It became a little harder to pick up speed from pumping and my bike didn’t have quite as much pop as it once exhibited.

It also sat a little deeper in its travel in berms and corners. Again however, switching from 9º to 6º elastomers, could be reduce this feeling to some degree should one choose. As far as climbing was concerned, I had no issues or complaints with the device. Sure, you have a slower engagement, which is a net negative on technical climbs, but alas this is a device that’s aimed largely at improving your experience when pointed down the hill.

Lastly, something worth noting was that I couldn’t mount a chainguide, due to the Ochain’s broad width. More specifically, I attempted to mount a OneUp lower bashguard to no avail. This means that protecting your rather pricey investment could prove difficult. As far as long term durability is concerned, the product is extremely well made, nicely sealed and runs incredibly smoothly. While the inside appears intimidating, rebuilds are very straightforward. As the second owner of the spider I tested, I am confident saying it’s in it for the long haul.

So who is the Ochain for? I’d say the ultimate tinkerer, but more specifically it could also prove quite useful to everyday discerning riders who perhaps have a bike that they’re absolutely in love with except for a nagging doubt about its harsh rear suspension.

I can think of a few bikes I’ve owned over the years that would have been greatly improved by an Ochain. My 2016 Giant Reign and 2018 Devinci Spartan come to mind immediately. Anyhow, yes it is pricey but depending on which bike and rear hub you’re riding and invested in, it can absolutely make a substantial improvement to certain aspects of the ride quality. At the end of the day, it’s not for every rider or every bike, but I feel that it could really be the missing link for some setups.